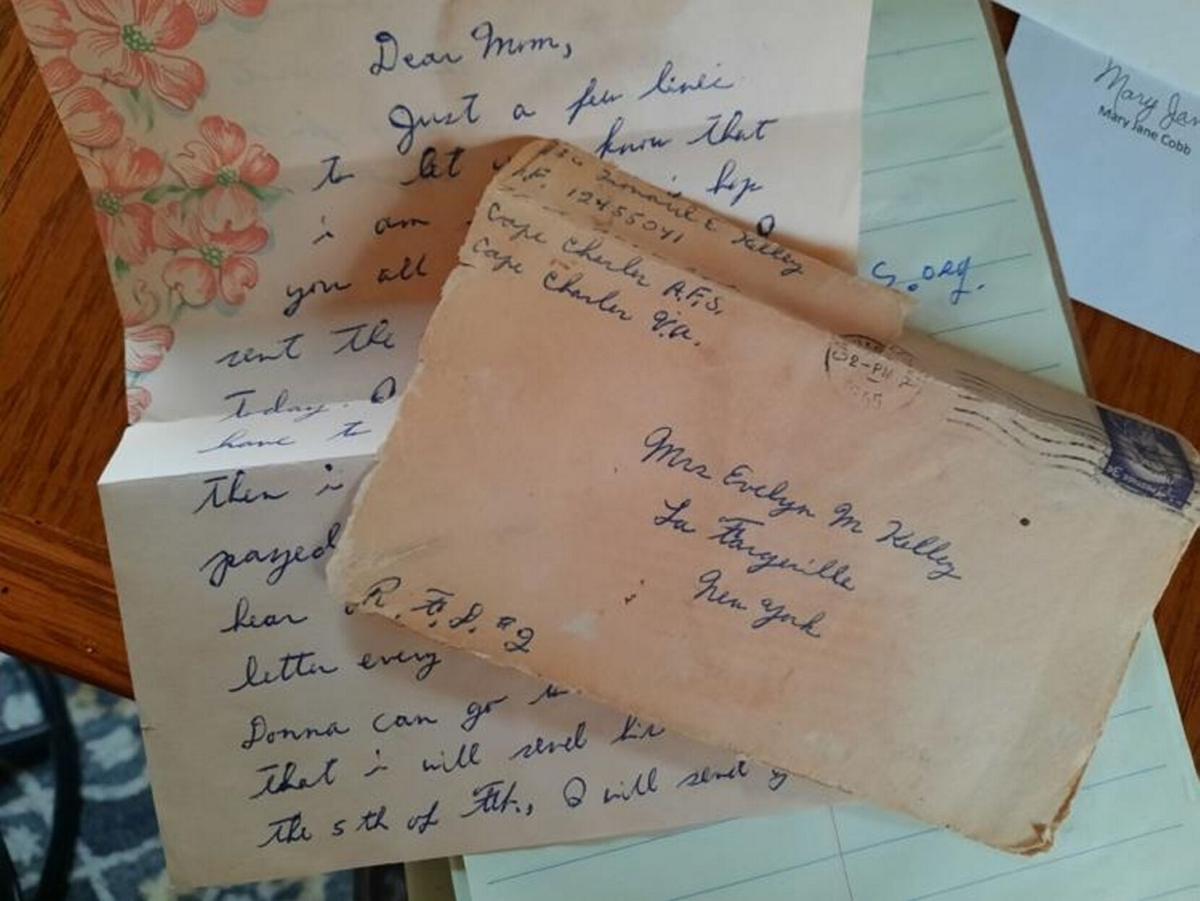 The 1955 letter that Mary Jane Cobb discovered in her Sandy Creek residence has been returned to Leonard E. Kelley. Chris Brock/Watertown Daily Times 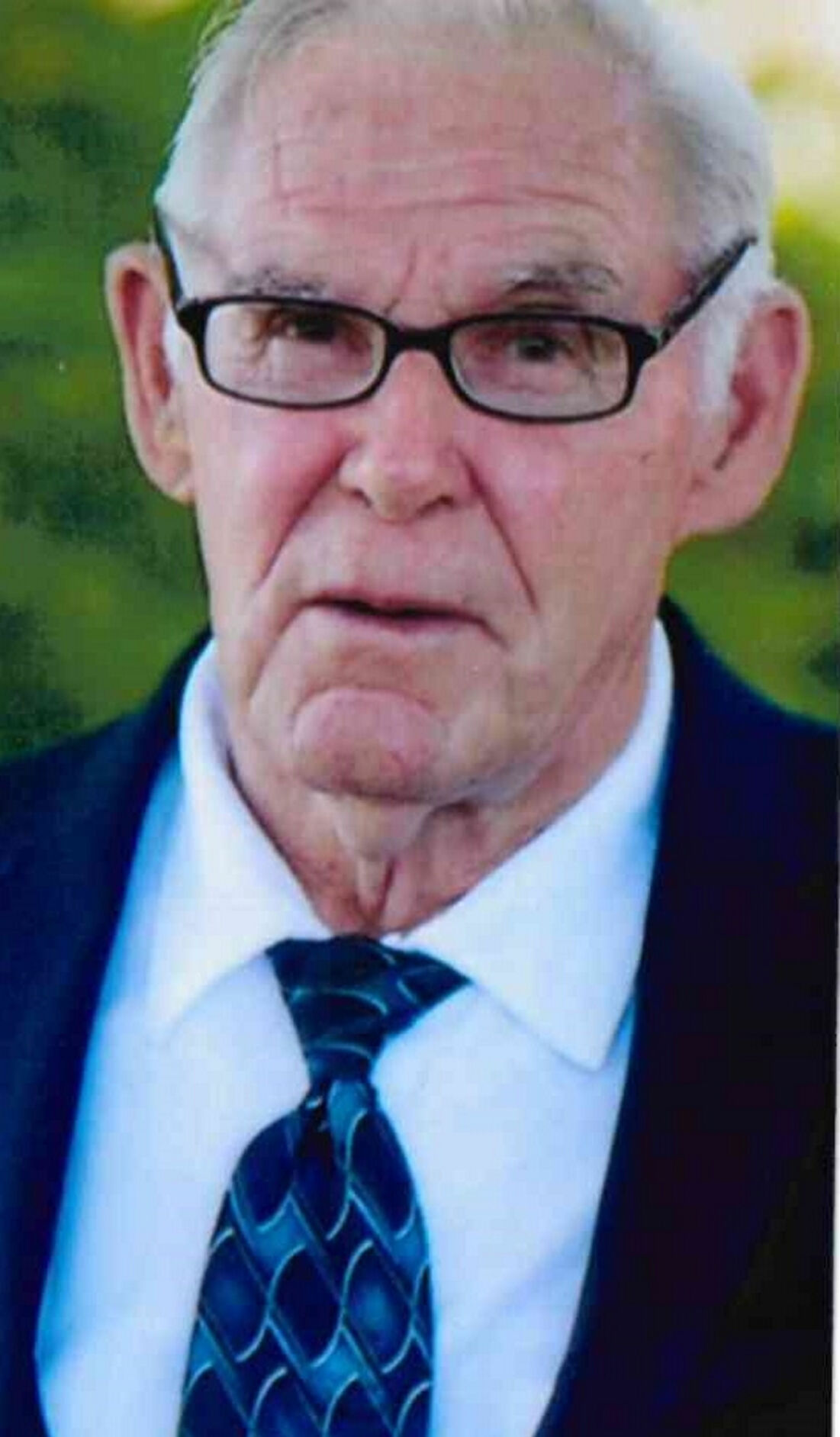 Leonard Kelley is grateful to receive a letter that he wrote in 1955 while in the Air Force. He’s now 84.Courtesy of Evelyn Robertson 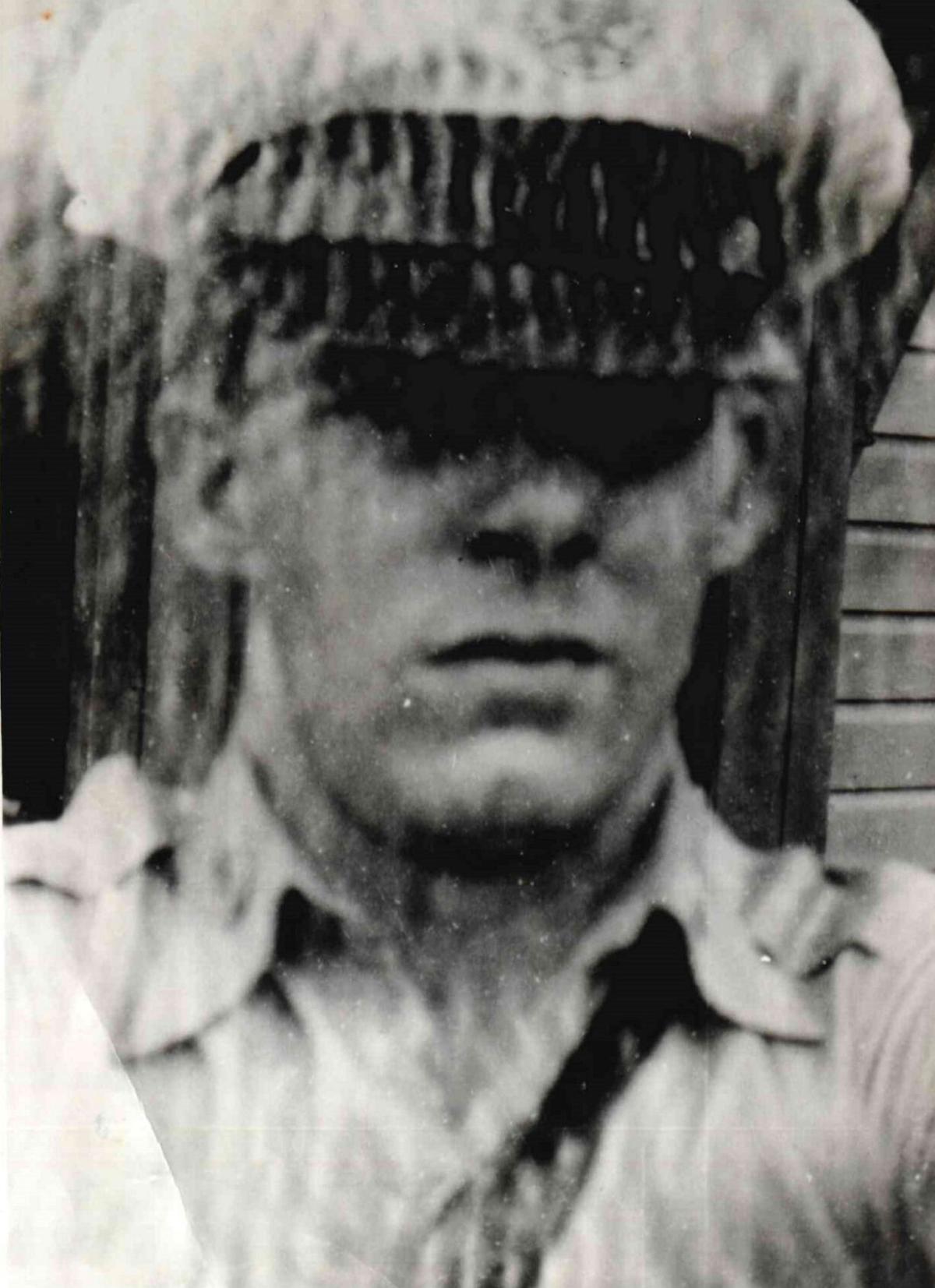 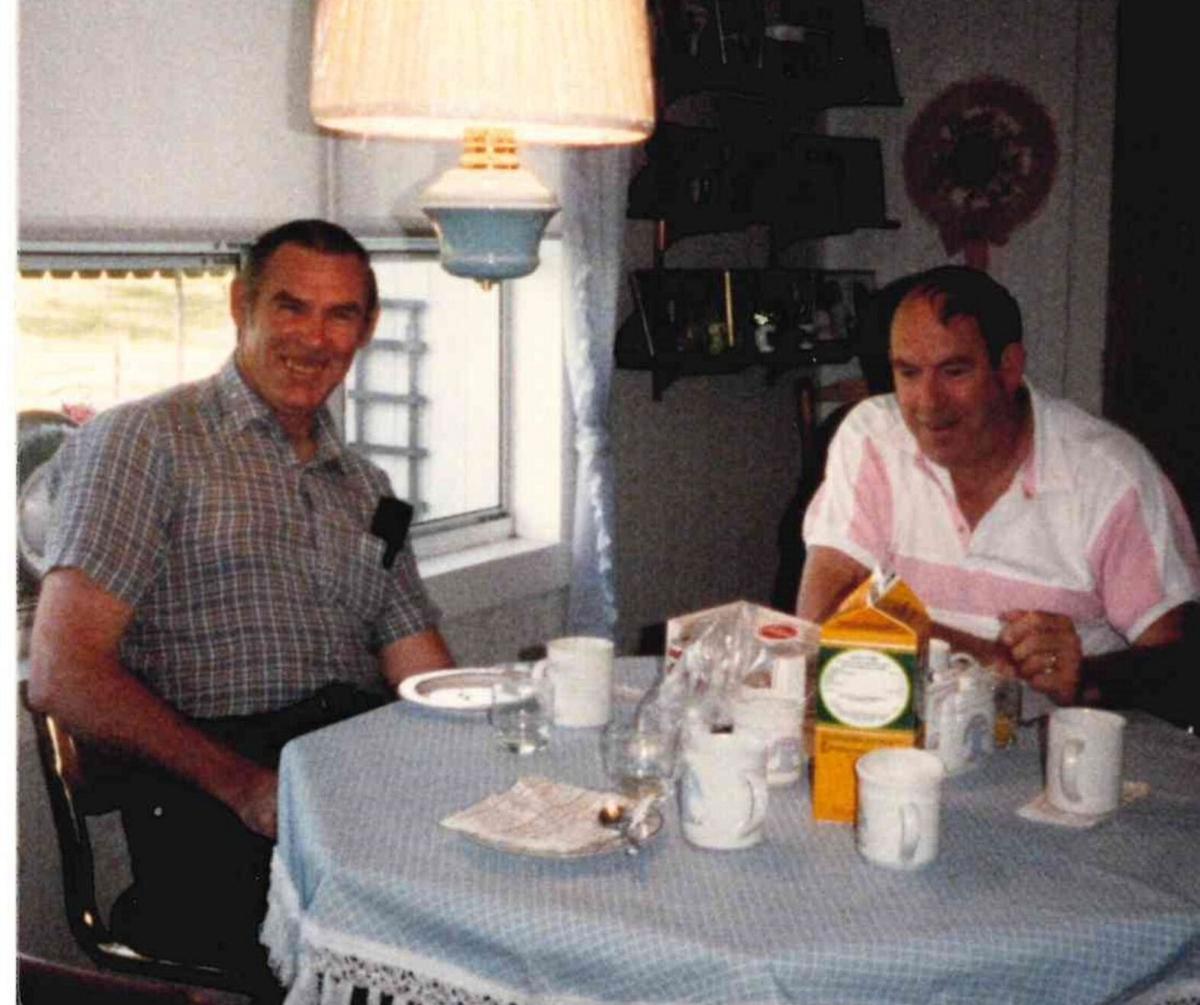 In this photo taken a few decades ago, Leonard Kelley, left, chats with his brother, Robert Houghtaling, who died in 2016. Courtesy of Evelyn Robertson 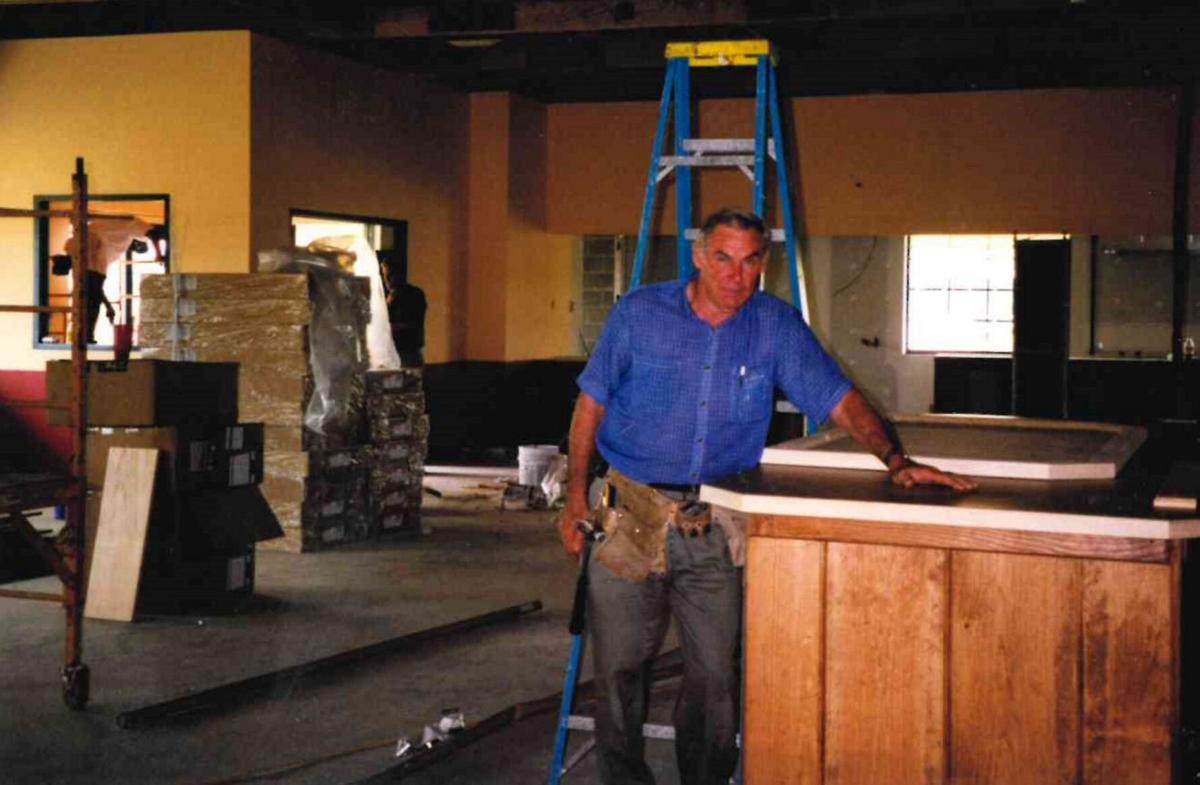 After his service in the Air Force, Leonard Kelley created Kelley Construction, building houses. This is a file photo at one of his job sites. Courtesy of Evelyn Robertson

The 1955 letter that Mary Jane Cobb discovered in her Sandy Creek residence has been returned to Leonard E. Kelley. Chris Brock/Watertown Daily Times

Leonard Kelley is grateful to receive a letter that he wrote in 1955 while in the Air Force. He’s now 84.Courtesy of Evelyn Robertson

In this photo taken a few decades ago, Leonard Kelley, left, chats with his brother, Robert Houghtaling, who died in 2016. Courtesy of Evelyn Robertson

After his service in the Air Force, Leonard Kelley created Kelley Construction, building houses. This is a file photo at one of his job sites. Courtesy of Evelyn Robertson

The letter that an Air Force veteran wrote to his mom 65 years ago and which was discovered decades later in the walls of a Sandy Creek home has been returned to him.

Leonard E. Kelley wrote the letter in 1955 while he was stationed at an Air Force base in Virginia. His letter also contained an envelope when found, postmarked with a 3 cent Lady Liberty stamp, addressed to his mother, “Mrs. Evelyn M. Kelley, LaFargeville, New York.”

Somehow, the letter made its way to Sandy Creek, where several years ago it was found by Mary Jane and James L. Cobb, who were restoring their County Route 15 home. Mr. Cobb died in 2012 and while cleaning out a desk a few months ago, Mrs. Cobb decided to send the letter to the Watertown Daily Times.

“I was praying that you might be able to find someone in this military family and who wish to receive this letter,” Mrs. Cobb wrote.

Her prayers have been answered. Relatives of Mr. Kelley contacted Mrs. Cobb to thank her, which brought the woman to tears.

“I think it’s wonderful,” Mrs. Cobb said. “I’m glad that he knows it still exists. I never dreamed it, but it’s a wonderful thing. It brought tears to my eyes. I couldn’t help it, but I cried.”

The path of the letter from its 1955 origins at a Virginia Air Force base to Sandy Creek and finally to Mr. Kelley’s current residence in Maryland began with a Times story requesting assistance from readers.

Several people wrote emails to the Times with clues, but one that was “snail-mailed” to the Times offices provided the most insight. The letter is from John L. Schulz, Copenhagen, who said that Leonard’s mother, Evelyn M. Kelley, was his grandfather’s sister, also making her Mr. Schulz’s great aunt.

Mr. Schulz’s mother, Elizabeth I. Davis Schulz Seifridsberger, who died Oct. 23, was a daughter of Ralph R. and Maysel Davis. Ralph Davis, (1916-1982) was a sibling of Mrs. Kelley.

“Really a shame this letter hadn’t come to light sooner,” Mr. Schulz wrote. “So many ‘old timers’ of the family are gone that there are few who remember past events and people.”

The Nov. 10 Times story noted that a January 2016 obituary for Mr. Houghtaling, 75, of Evans Mills, referred to an apparent brother of Mr. Kelley — Leonard Kelley of Maryland.

Mr. Kelley received the letter on Sunday, Dec. 13. Evelyn L. Robertson, his “significant other” partner who has been living with him for 32 years, called the reporter that day from their home in Marion Station, Md., and left a message for him to return their call.

Mr. Kelley was grateful to receive the letter and surprised about the day of delivery.

“My brother’s wife called and said she’s going to send me a letter,” Mr. Kelley, 84, said. “I called her this morning to ask her about it and said, ‘I haven’t received anything yet.’ But when I went out to my mail box to get my newspaper, the mailman pulled up in the van and gave me the letter. I can’t figure out how they deliver on Sunday.”

When he handled the letter which last touched his hands 65 years ago, Mr. Kelley said he barely recalled writing it.

“I sat down nights and wrote little notes here and there,” he said. “But it’s been so long and my memory ain’t what it used to be.”

In his letter to his mom, Mr. Kelley wrote: “I am setting here on my bed now. I get a letter every day from Thelma. But Donna can go to hell.”

“I was trying to run that through my mind today — who Thelma was.” Mr. Kelley said. “The only Thelma I knew, is that a guy I worked for on a dairy farm. His daughter was named Thelma Cromwell. But that’s been many years ago.”

How about the discarded Donna?

“I think that was one of my sister’s friends that always tried to stick her nose in my business,” Mr. Kelley said.

Mr. Kelley’s 1955 letter also noted the money he was sending back home for various purposes and people.

“I wasn’t making much, but I was trying to help everybody else,” he said.

Mr. Kelley served in the Air Force for four years and two months and worked as a military police officer.

“He flew all over the place,” Ms. Robertson said. “He brought the guys back who went home on leave and wouldn’t come back. He had to go find them.”

After the service, Mr. Kelley settled in Salisbury, Md., where he created a business, Kelley Construction.

“I was all over the Eastern Shore down here,” he said.

He met Ms. Robertson when he moved into a trailer park in Pocomoke City, Md., where she had a residence. Ms. Robertson is a former seamstress who now exercises her craft at home by making quilts and other items.

“He was married to my best girlfriend one time,” Ms. Robertson said. “I heard about this Leonard Kelley all the time, but I never met him until I left my husband and moved to Pocomoke. And a year or so later, this Mr. Kelley moved into the park. And I was dying to see what he looked like. I couldn’t believe it. He’s tall, about 6-foot, one. And he’s well built. He’s still straight, he’s not humped over and he walks good.”

In 1989, the couple purchased a home in Marion Station. In 2013, Mr. Kelley underwent heart surgery.

“I liked my job, but I got to the age where the doctors don’t want me doing nothing,” Mr. Kelley said. “I had an open heart operation and they want me to stop doing everything. I told my doctor: ‘Retirement isn’t going to kill me. It’s sitting around doing nothing.’”

Mr. Kelley isn’t sure how his original letter made its way to Sandy Creek and into the hands of Mrs. Cobb.

“I didn’t know anybody in Sandy Creek,” he said. “My parents lived on a dairy farm in LaFargeville when I left. Apparently, they moved to Sandy Creek.”

This tale of an old, returned letter concludes with a new letter; one recently received by Mrs. Cobb.

“I got a letter from the family,” she said. “They gave me Leonard’s phone number and wanted me to call him. I haven’t done that yet. I’m partially invalid and I have a hard time getting around and breathing.”