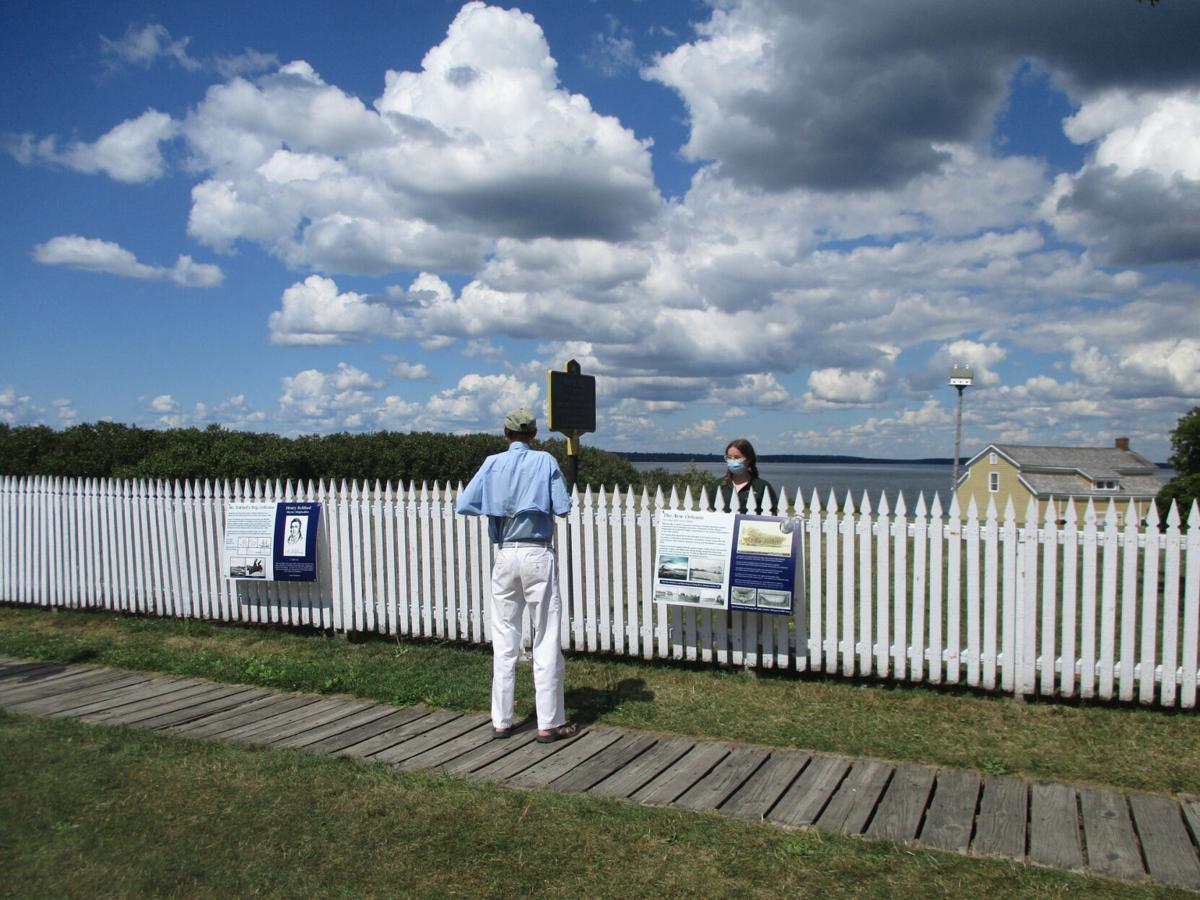 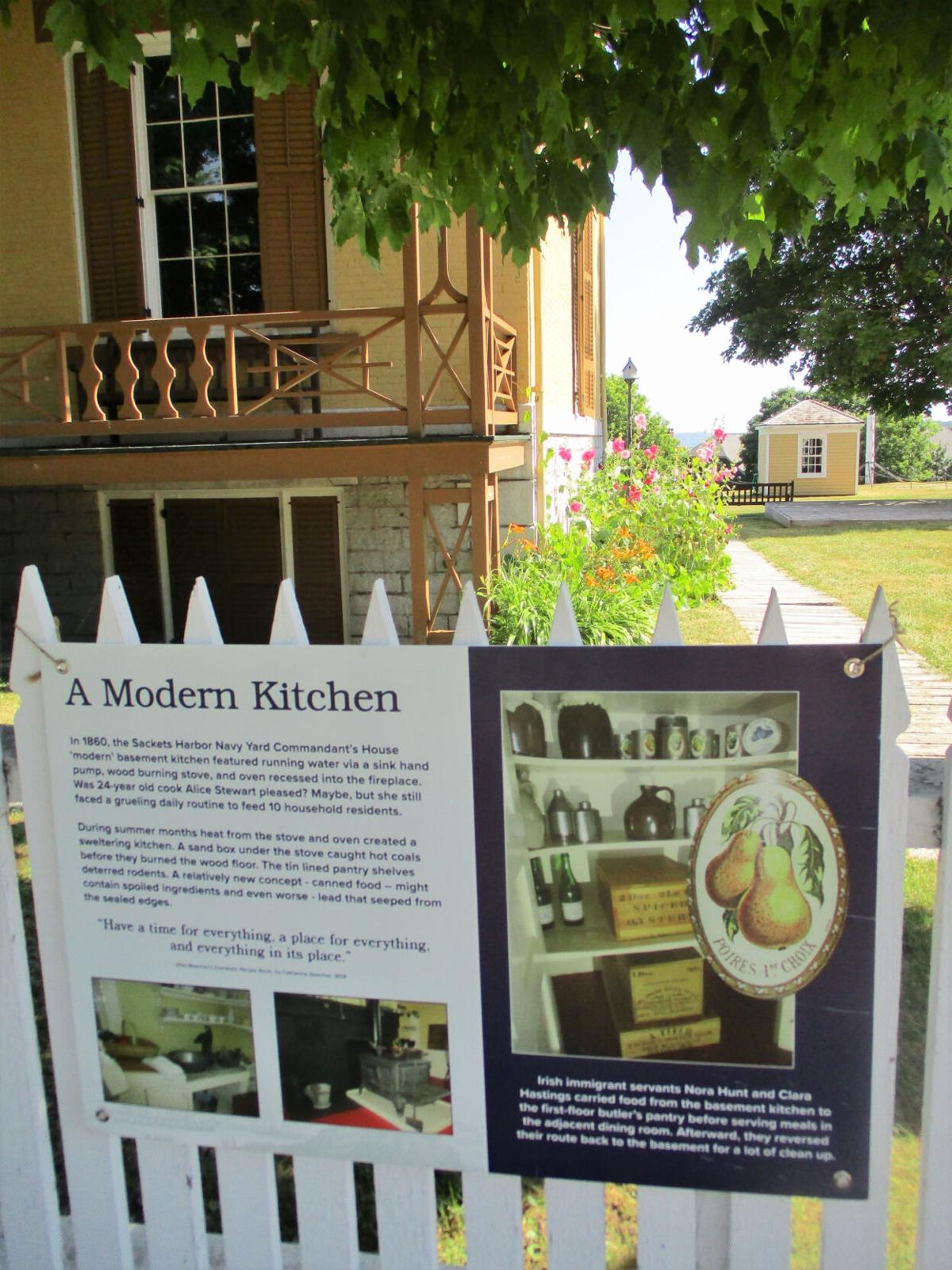 One of the 10 panels of ‘History on the Lawn’ at the Sackets Harbor Battlefield State Historic Site. Courtesy C. Barone

One of the 10 panels of ‘History on the Lawn’ at the Sackets Harbor Battlefield State Historic Site. Courtesy C. Barone

SACKETS HARBOR — An innovative program at the Battlefield State Historic Site that was created as a way to bring bits of history to the public during the pandemic has been so popular that it will continue indefinitely.

“History on the Lawn,” which premiered in April, was the battlefield’s initial answer to its closed buildings and social distancing requirements enacted during the state’s PAUSE order.

Constance B. Barone, site manager of the Sackets Harbor Battlefield State Historic Site, said that she and co-worker Nicole Kronk were thinking of ways the site could connect with visitors when the site’s buildings were closed in March during the pandemic lockdown.

“We could see at the end of March that on any nice day, there were so many people walking the grounds,” Mrs. Barone said. “That generally doesn’t happen until later in the season. But once the shutdown came, and it was a nice day, we had lots of people around.”

So Mrs. Barone posed a question to herself and Ms. Kronk:

“What if somehow we took the inside outside?”

What resulted was a series of 10 educational story panels featuring topics that are normally addressed in the Commandant’s House tour and Navy Yard exhibits. Five were installed in April and five more were added later.

The 2-feet-by-3-feet panels, made out of corrugated plastic, are hung daily on the fence in front of the Commandant’s House and Navy Yard. Photos and illustrations on them are accompanied by text.

“The panels are not only self-contained for information, but they worked really well as sort of an ice breaker to have staff talk to visitors when the buildings weren’t open,” Mrs. Barone said.

Occasionally, battlefield site staff members would be out in the yard doing work after the signs were attached to the fence for the day.

“And when people would come by, we’d stop and talk to them — social distanced with masks on,” Mrs. Barone said. “The panels were not only self-contained for information, but they worked really well as sort of an icebreaker to have staff talk to visitors when the buildings weren’t open.”

Phase IV of the PAUSE order was enacted in June, allowing battlefield buildings to reopen with limited capacity and other safeguards. But battlefield officials decided to continue the “History on the Lawn” panel program.

“We thought it was going to be a temporary thing when we opened, that we’d probably taper off and not use them, but it’s been the contrary,” Mrs. Barone said. “They remain very popular for the people walking or jogging by. They’re attention-getters. The text is very short, the images are attractive and compelling. We have people who wander up from downtown and don’t even know and discover the site. We just see people constantly stopping and reading.”

The 10 panels came in two batches. The first five were designed in early spring by a worker at the Bureau of Historic Sites in Albany. The bureau provides technical and program support to New York’s state-owned parks and historic sites.

“They said they had a graphic designer who wasn’t assigned to some other project,” Mrs. Barone said. “Since then, she’s gotten fairly lots of projects.”

After being designed, the signs were printed by Inkwell Graphics, Watertown.

The first five signs were so popular that five more were produced using local resources, since the worker at the state bureau had become busy with other projects. Those signs, also printed by Inkwell, arrived a few weeks ago.

“It’s kind of a takeoff on that we do have a number of interpretive panels on the site,” Mrs. Barone said. Those year-round panels, on metal pedestals set in concrete, include 10 on the battlefield trail.

Meanwhile, even though the site’s buildings are now open, a worker can occasionally be found outside answering visitors’ questions sparked by the panels.

“By having an employee out front as much as possible, it gives that opportunity to interact and to tell people, ‘We have an interior,’” Mrs. Barone said. “It’s one more level of communication with our visitors.”

The topics of the 10 panels:

n “Explore Our Past” (intro panel)

n Commodore Isaac Chauncey: The naval station at Sacket’s Harbor grew to be the largest and most productive under his rule.

n Commodore Josiah Tattnall: In 1861, the commandant and Georgia native resigned his post at the Sackets Harbor Navy Yard to join the Confederate Navy. On March 29, 1862, he was given responsibility for Virginia’s naval defenses with the infamous ironclad Merrimack as his flagship.

n Frances Metcalf: In 1906, after her husband’s death, she became the only woman to care for a U.S. Navy station. Duties included watching over the gunnery and raising and lowering the navy yard flag daily.

n USS New Orleans: A ship-of-the-line laid down in 1814 in Sackets Harbor intended for use by the United States Navy in the War of 1812. The 80-gun ship was never finished.

n “Waste Over Time” (hygiene and disposal of waste matter)