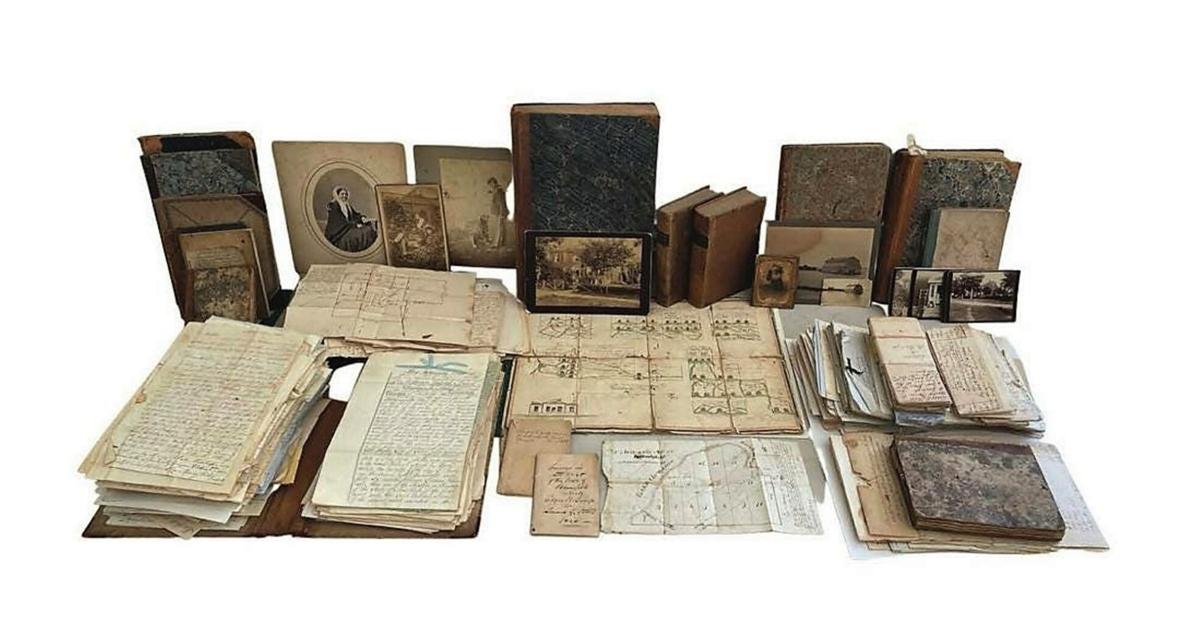 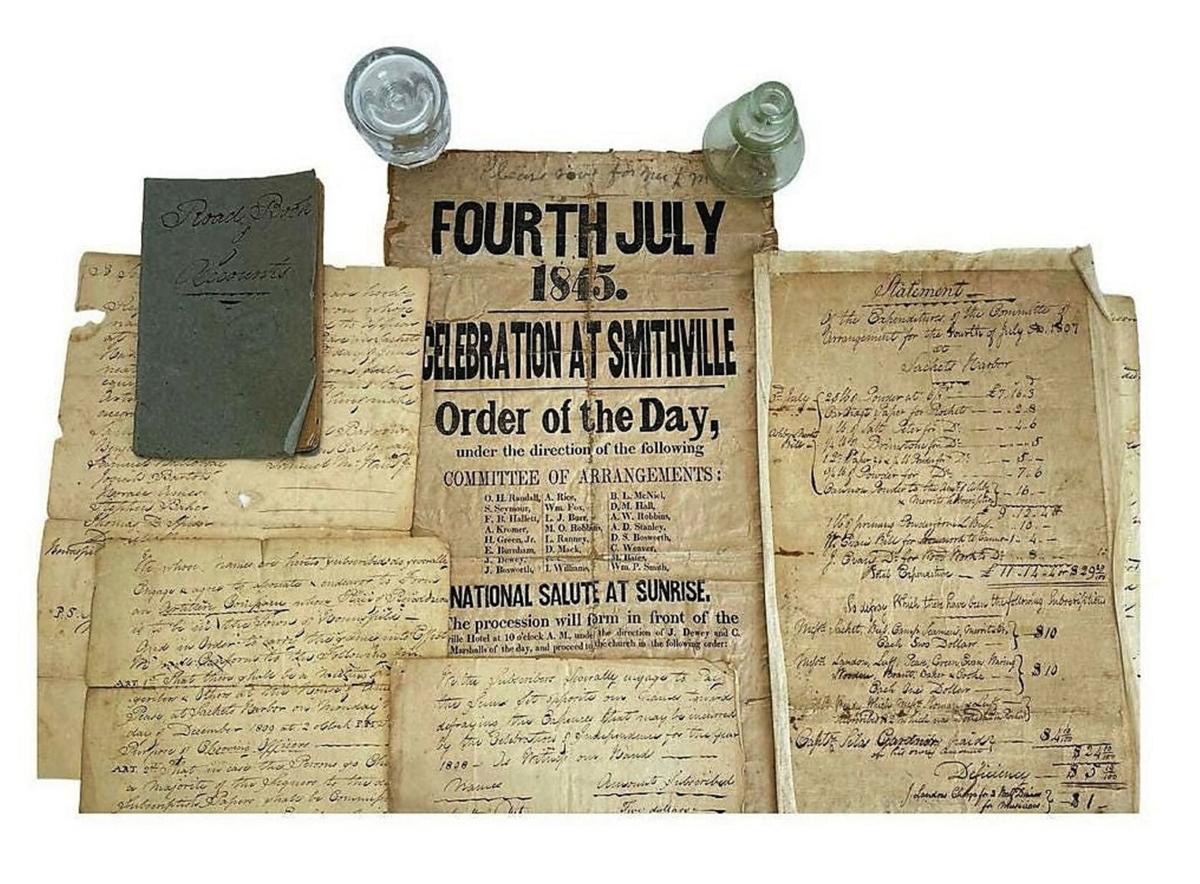 Among items secured by the Sackets Harbor Historical Society at last Sunday’s auction were manuscripts documenting area Fourth of July celebrations from 1807 to 1811. Blanchard’s Auction Services 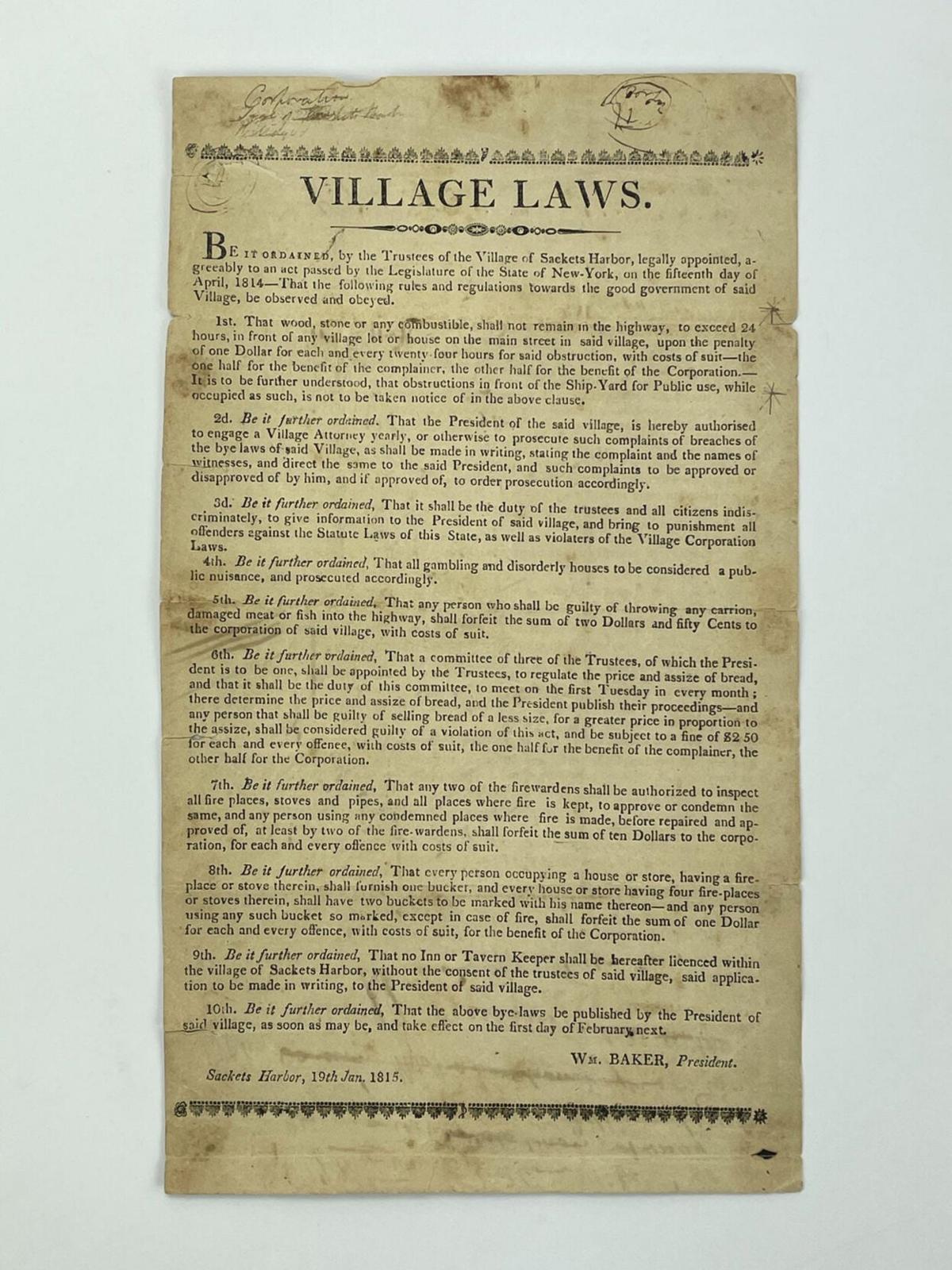 The Sackets Harbor Historical Society purchased this sheet of laws at the auction, printed in 1815. Law number 5 notes, “That any person who shall be guilty of throwing any carrion, damaged meat or fish into the highway shall forfeit the sum of two dollars and fifty cents to the corporation of said village, with costs of suit.” Blanchard’s Auction Services

Among items secured by the Sackets Harbor Historical Society at last Sunday’s auction were manuscripts documenting area Fourth of July celebrations from 1807 to 1811. Blanchard’s Auction Services

The Sackets Harbor Historical Society purchased this sheet of laws at the auction, printed in 1815. Law number 5 notes, “That any person who shall be guilty of throwing any carrion, damaged meat or fish into the highway shall forfeit the sum of two dollars and fifty cents to the corporation of said village, with costs of suit.” Blanchard’s Auction Services

SACKETS HARBOR — The historical society in the village was able to successfully bid on items that went up for auction last Sunday in a sale that attracted worldwide interest.

They were among the dozens of lots in the “Camp” collection sold last Sunday at the online auction hosted by Blanchard’s Auction Service, Potsdam. The collection descended through the Camp family from Sackets Harbor. The material was recently removed by the Camps’ direct descendants from the Federal home that Col. Elisha and Sophia Hale Camp built from 1805 to 1815 and in which the descendants have remained until now.

Elisha Camp, brother-in-law of village founder Augustus Sacket, moved to Sackets Harbor in 1804. Mr. Camp arrived in the village after graduating from Columbia Law School and became one of the most prominent citizens of the north country. He wore a dizzying array of hats, including postmaster, militia officer, deputy New York state district attorney, politician, newspaper owner and editor, banker and a substantial landowner with a special interest in local mills, Lake Ontario and shipping.

“A lot of the Sackets Harbor stuff did end up going local, which was nice to see,” Mr. Blanchard said. “We had interest in several lots that are going overseas.”

Village co-historian Constance Barone said the society found out about the auction when a representative at Blanchard’s called the organization during the first week of March.

“We didn’t know about it prior to that,” Mrs. Barone said. “We started pulling our team together and looking at what the plan should be to secure and where it should go.”

“We were really pleased that we were able to pull together in a relatively short period of time to get the documents we thought were critical to get and to keep them together and to ensure they are properly preserved and managed,” said Sackets Harbor Historical Society president David W. Alteri.

Other lots successfully acquired by the society:

The original items purchased by the society won’t be staying in the village.

“The ultimate goal for them is to go into a larger depository where there’s an archivist,” Mrs. Barone said. “It would be cataloged, finding-aids created and available for researchers.”

“The historical society doesn’t have the resources, expertise to properly preserve and manage items like this,” Mr. Alteri said. “We’re getting digital images of them so we can have them for informational purposes. But we want them transferred to an entity that has the resources and capability to preserve them, hopefully forever and to make them accessible to anyone who would like to see them.”

Mrs. Barone, who is also manager of Sackets Harbor Battlefield State Historic Site, said the society has been in talks with a handful of potential repositories for the items.

“But we’re still communicating to see where the collection will be ultimately accepted and housed,” she said.

Mrs. Barone said the society is making some “quick iPad digital photographs” that are turning out quite well.

“We want to do as much documentation immediately as we can,” Mrs. Barone said. “The images we are getting are excellent. Pieces can certainly be redone later if it goes on to something like an exhibition.”

The Sackets Harbor group, or another local historical society, may be receiving as a donation a Camp family related item that has been owned by a Sackets Harbor native who now lives in Cortland.

Gene Signor said he read last Sunday’s report about the auction in the Watertown Daily Times and informed a Times reporter that he had a multi-paged hand written document titled, “Elisha Camp Canal Work dated 1827 Detailing Employee Work/Payroll Records.” He would like to donate that and also a bound 1861 topographical atlas of Jefferson County showing all its towns and 50 villages.

In 1830, Elisha Camp led the finance of a canal, “Camp’s Ditch,” that ran from Watertown to Sackets Harbor.

“Elisha Camp was appointed a commander and in 1832 it was finished, supplying water power to the village of Sackets Harbor,” according to the files of the Watertown Daily Times. “The greatest difficulty, however, encountered was in maintaining the first half mile of the ditch which was constructed along the margin of Black River where it was liable to be washed away on one side and filled by slides of clay and sand on the other. These difficulties finally led the work to be abandoned after having been in use about 10 years.”

Mr. Signor said his father, Earl, was an electrician and a plumber in Sackets Harbor.

“Over the years, he became friends with members of the Camp family,” he said. “That’s how we got some of this stuff.”

“They got passed down to family members and I ended up with some and I don’t know where some of the others went and I don’t know the quantity,” Mr. Signor said of his Camp family items. “We knew enough about them that we ought to hang onto them.”

A few days after the auction, Mr. Blanchard said he and his wife, Sue, were busy with coordinating the shipping and delivery of the items bought last Sunday.

“We’ve got about 135 unique buyers,” he said. “Of those 135, somebody might have bought one item or somebody bought six items. It’s a lot of coordinating, transporting.”

Also, it’s making sure items have been paid for.

“I always say with these online auctions that there’s always a couple of lots that either you never get paid for, or you get the run-around and they just never come through,” he said. “It’s different than someone dealing with you in person who walks in, bids on an item, pays for it and they take it home. Now, you spend a lot more time chasing after the money and coordinating shipping and transporting. It’s very time consuming. When somebody says, ‘The auction is all over,’ it’s like a long race. You just rounded another bend, that’s all.”

But Mr. Blanchard can’t complain about the geographical scope that online auctions provide.

“There’s no way you can reach as many people doing it in person as we do it online,” he said. “And with speciality type sale, for that person who wants to buy one book and lives in Georgia, if you didn’t have it online, he probably wouldn’t participate.”

He added, “What has really changed in this business is that there’s more and more regional people online and you’re selling more stuff than ever to the high-end consumer.”

Mr. Blanchard said that 25 years ago, his audience for auctions would have been made up of 50% dealers.

“Today, it’s a smaller number — I’d say less than 20% dealers and the rest is the end-consumer, the retail person trying to take it home to put on the shelf or to use it.”

If it wasn’t for the pandemic, Mr. Blanchard said his auctions would also be “live” at his auction house in addition to being online.

“That’s what we’ve done in the past,” he said. “When the pandemic came, it wasn’t a huge transition. It was an easy transition, but it was getting the buyers to transition over. I think the first time someone does it, they’re a little intimidated by it. But they do it once, and it’s like, ‘That was easy. When’s the next one?’”

Mr. Blanchard said that he’s also found that online auctions have become a form of entertainment for people during the pandemic.