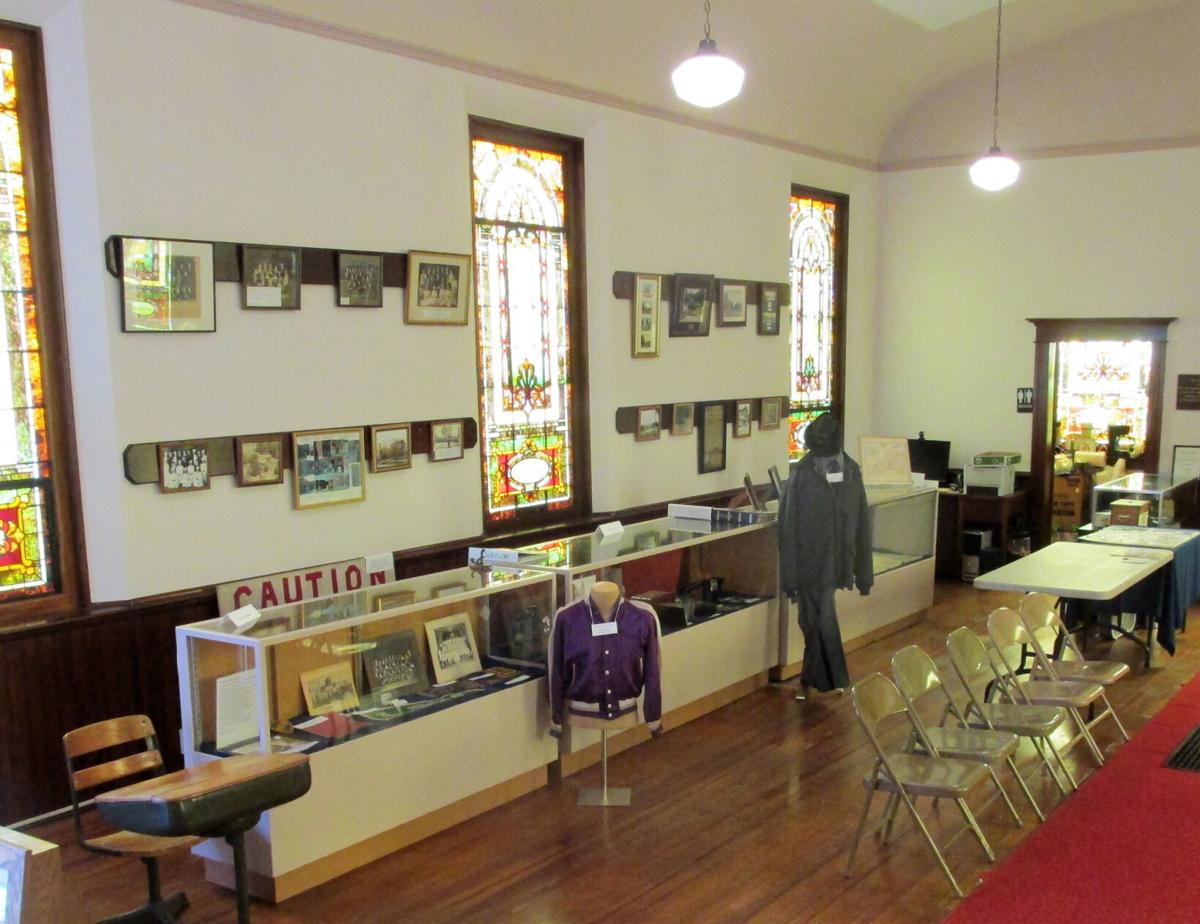 The Dexter Historical Society’s home is the former First Universalist Church. It contains a wide array of memorabilia from the past. It is temporarily closed due to the pandemic. Courtesy John Stano 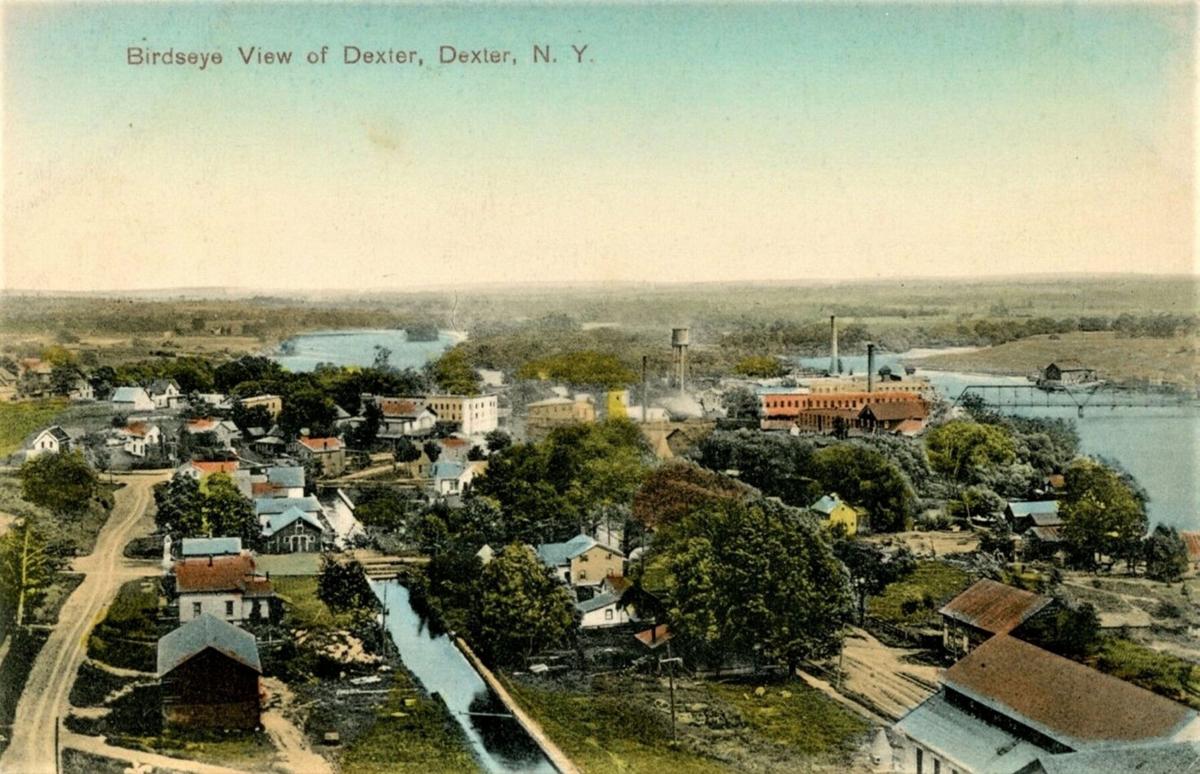 This postcard shows Dexter circa 1900. The body of water in center is the mill canal that ran from the north channel of the river to the Dexter Sulfite Mill. It made pulp through a chemical process using sulfuric acid. “Apparently, it was one of the first mills in the country to use that process,” said village historian John Stano.

The Dexter Historical Society’s home is the former First Universalist Church. It contains a wide array of memorabilia from the past. It is temporarily closed due to the pandemic. Courtesy John Stano

This postcard shows Dexter circa 1900. The body of water in center is the mill canal that ran from the north channel of the river to the Dexter Sulfite Mill. It made pulp through a chemical process using sulfuric acid. “Apparently, it was one of the first mills in the country to use that process,” said village historian John Stano.

From first to ‘Last’: Building proposed in Dexter for village’s firefighting heritage

DEXTER — This village’s original fire department was disbanded in 2012, but the embers of it…

DEXTER — This village was on its way to becoming a boom town when its fire department was established more than 130 years ago.

In November of 1886, 31 years after the village on Black River Bay was incorporated, Henry Binninger chaired a meeting at the Underwood House for the purpose of organizing a fire department.

In 1887, village electors approved the raising of $400 by tax to construct a fire house on Water Street.

A Times’ clipping written by a proud Dexter resident from 1914 noted the village population that year was “about 1,200 people, and there would be more if we had houses for them to move into.”

According to Everts’ History of Jefferson County, the lands around Dexter were purchased by John and Jacob Brown, who in 1811, created a dam. A saw mill was put into operation in 1813 and a grist mill in 1826.

The plethora of water would continue to bolster the development of mills.

By the 1940s, three mills were operating in the village.

“A lot of the houses were built by the mills and their workers would live in the mill housing,” Mr. Stano said. “It was a boom town.”

The village’s downtown had a plethora of shops. Mr. Stano said there were at least three grocery stores, a barber shop, cigar store and several restaurants. Newspaper choices at one time included the Dexter Free Press.

For recreational outings away from all the hustle and bustle, a trolley ran from Watertown through Glen Park and Brownville, before ending up in Dexter on the waterfront, where the village docks are now. The trolley in Watertown ceased operations in 1937.

“People in Watertown and communities would grab the trolley and they’d come to Dexter to catch excursion boats,” Mr. Stano said. “They’d go to Sackets Harbor, Campbells Point and Henderson for day trips.”

Much of the village’s history is on display at the Dexter Area Historical Society, 105. E. Kibry St.

The society’s headquarters is the former home of the First Universalist Church, constructed in 1841. An extensive alteration of the building was begun in 1882. It included replacing the six original windows with stained glass windows and two windows were added to the front of the building. The renovated church was rededicated in 1893. Through the years, conveniences such as indoor plumbing and electricity were added.

The First Universalist Society held services in the church from 1841 through 1997, when the congregation voted to close the doors and disband. In 1998, the remaining members donated the church property to Frontier Housing Corporation of Dexter for restoration and renovation. After restoration, the church was transferred to the Dexter Historical Society for use as a museum.

The Dexter Universalist Church was added to the National Register of Historic Places in 2003 and is the only village structure listed on the register.

In January of 2019, a Boy Scout with Brownville’s Troop 55 enhanced the museum as part of completing an Eagle Scout project. Alexander Klindt, along with some members of his troop, his brother, Evan, and parents Sandra and Roger Klindt, cleaned, sorted pictures, stripped and repainted display cases, installed LED lights inside the cases and hung a great display of pictures of the Dexter High School classes and of early life in Dexter. Alexander then hosted a reception, with more than 100 guests attending to view the final project.

“All agreed that it was a wonderful transformation of the museum,” said Carolyn Marlowe, president of the Dexter Area Historical Society.

Alexander, a junior at General Brown Central, received his Eagle Scout at an Honors Court in September.

“The original sanctuary of the church is still together up on the pulpit area; the seat where the minister would sit in,” Mr. Stano said.

In 2018, Linda Sacco and Mrs. Marlowe started cataloging articles and artifacts at the museum. Ms. Sacco is also doing a genealogy project of the Dexter and surrounding areas.

Mrs. Marlowe said that because of the pandemic, she doesn’t plan to have the museum open to visitors any time soon.

‘That might have to wait until next summer,” she said.

Recently, crews took the bell out of the steeple of the former church. A few weeks ago village workers completed a framework for the bell for it to be displayed on museum grounds.

It is the sort of community involvement shown at the museum that encourages those working to create The Last Station, a building that would be on museum grounds and house two historic apparatus from the Dexter Fire Department along with local firefighting relics of the past.

Sherman Tucker, former fire chief for the Dexter Volunteer Fire Department, said the other fire department-related items range from a history in photographs, old marching uniforms, firefighting gear, and axes to a look back on the department’s firematics drill team.

The building would also have room for material being stored by the historical society that it doesn’t have room for in its current building.

“We’re working together on this,” said Gerald A. Kostyk, chairman of The Last Station committee and a member of the Dexter Volunteer Fire Dept. Inc. “They need room. The historical society is keeping a lot of their records in the basement of the village office.”

The proposal for the new building includes an attic space with 750 square feet of storage space. The building would be climate controlled and be handicapped accessible with a wheelchair lift to the finished floor level of the historical society building.

“This will eliminate the current wooden ramp, which will require future maintenance,” Mr. Kostyk said.

Building plans also include a transparent curtain wall so the Brockway 1929 engine and the 1865 hand pumper can be easily viewed.

An annex will likely connect the two buildings.

“Being side by side, you can make one step and see quite a bit of history,” said Mr. Tucker.

“I think it’s going to be a great asset to the village,” Mr. Stano said.