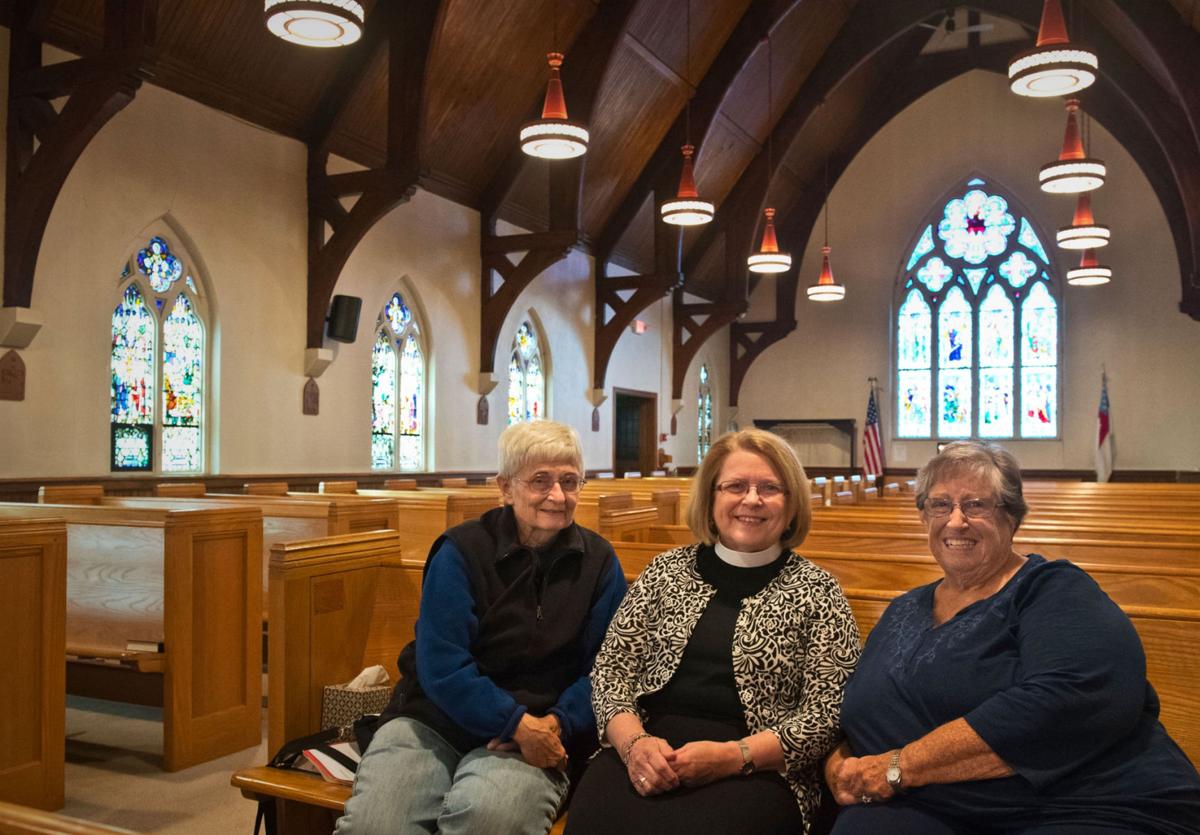 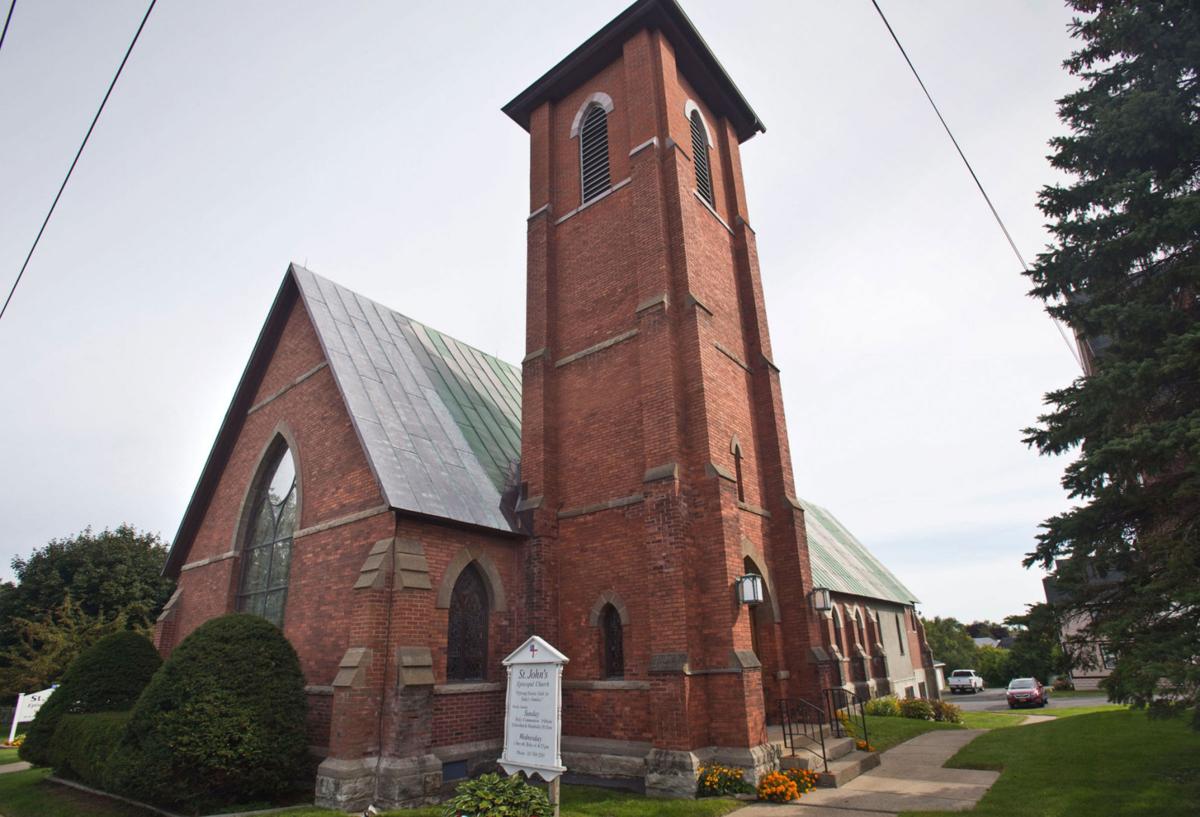 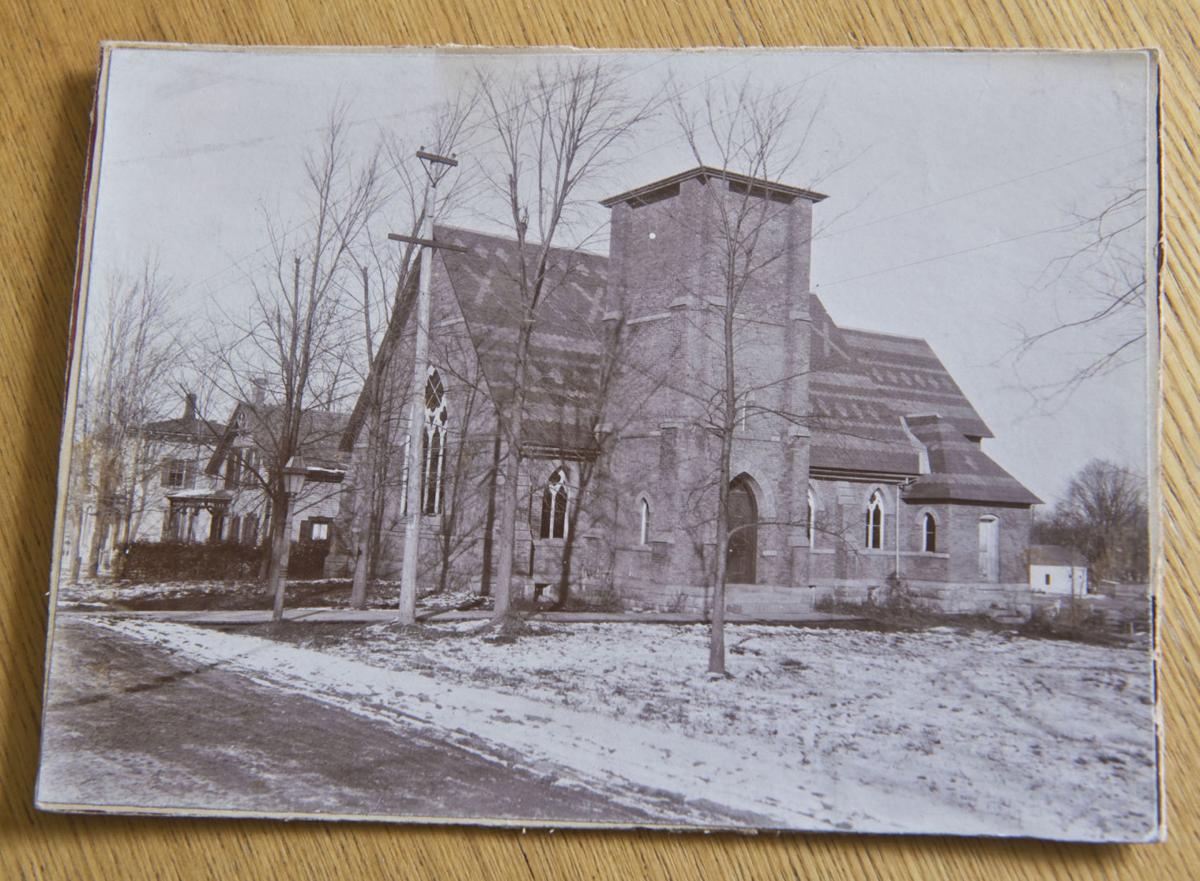 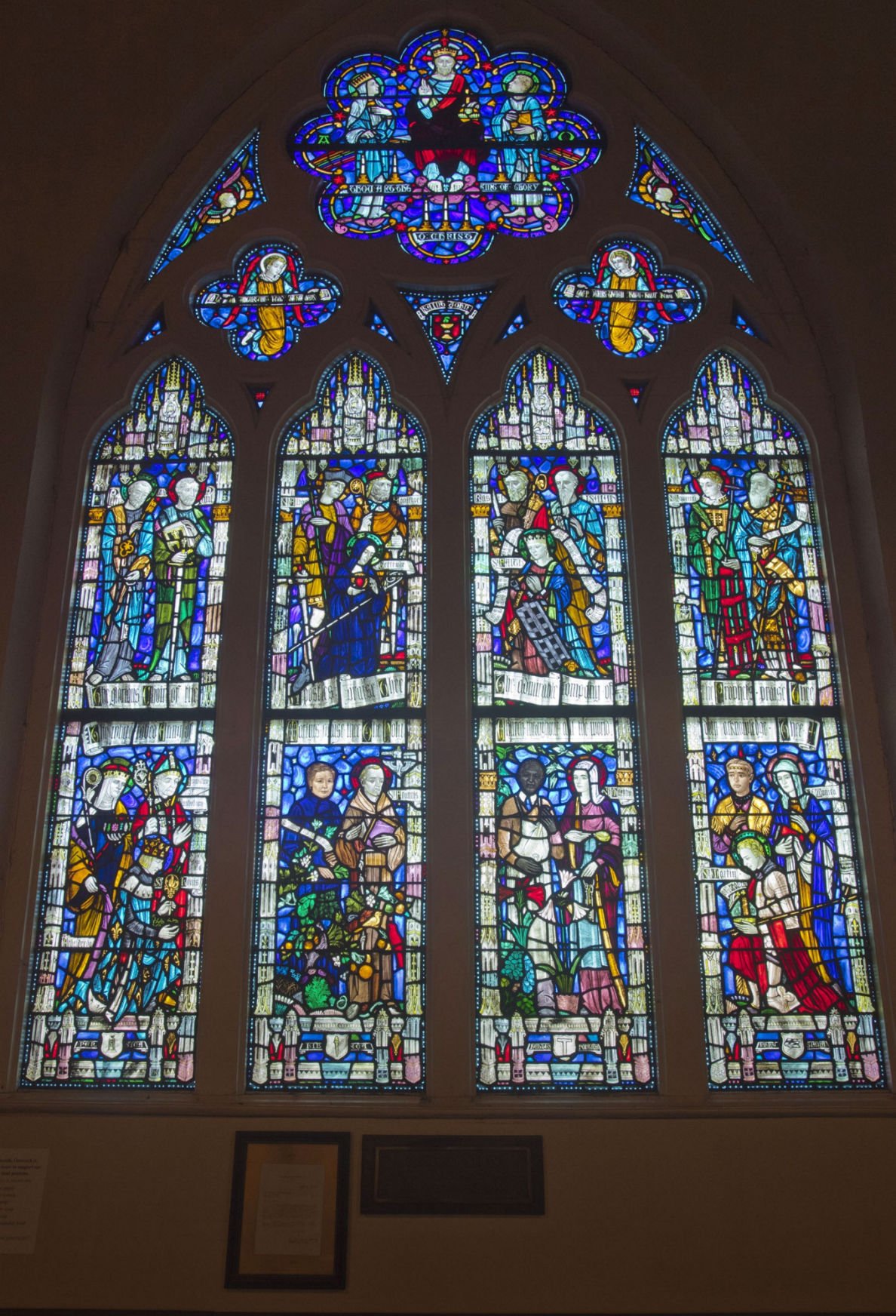 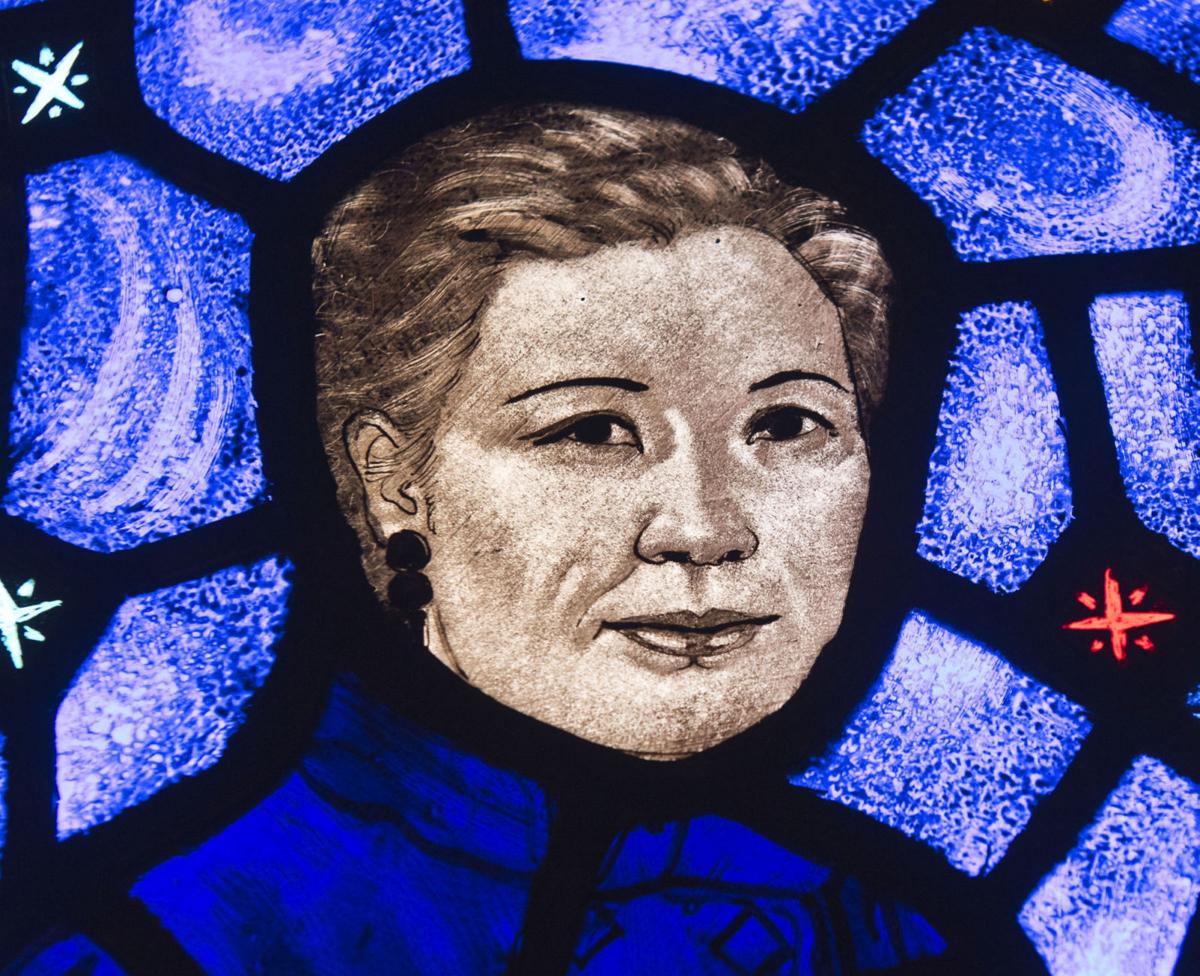 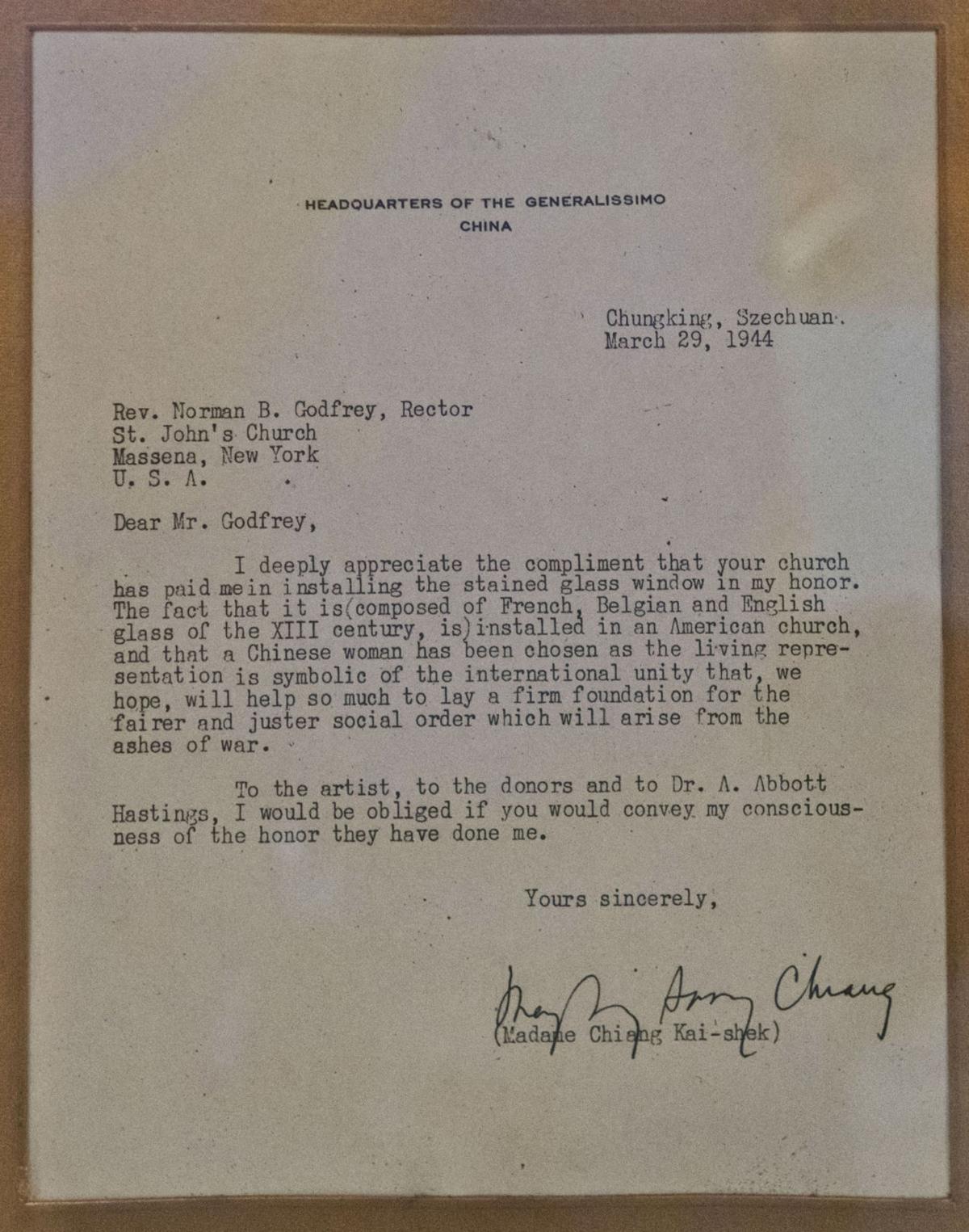 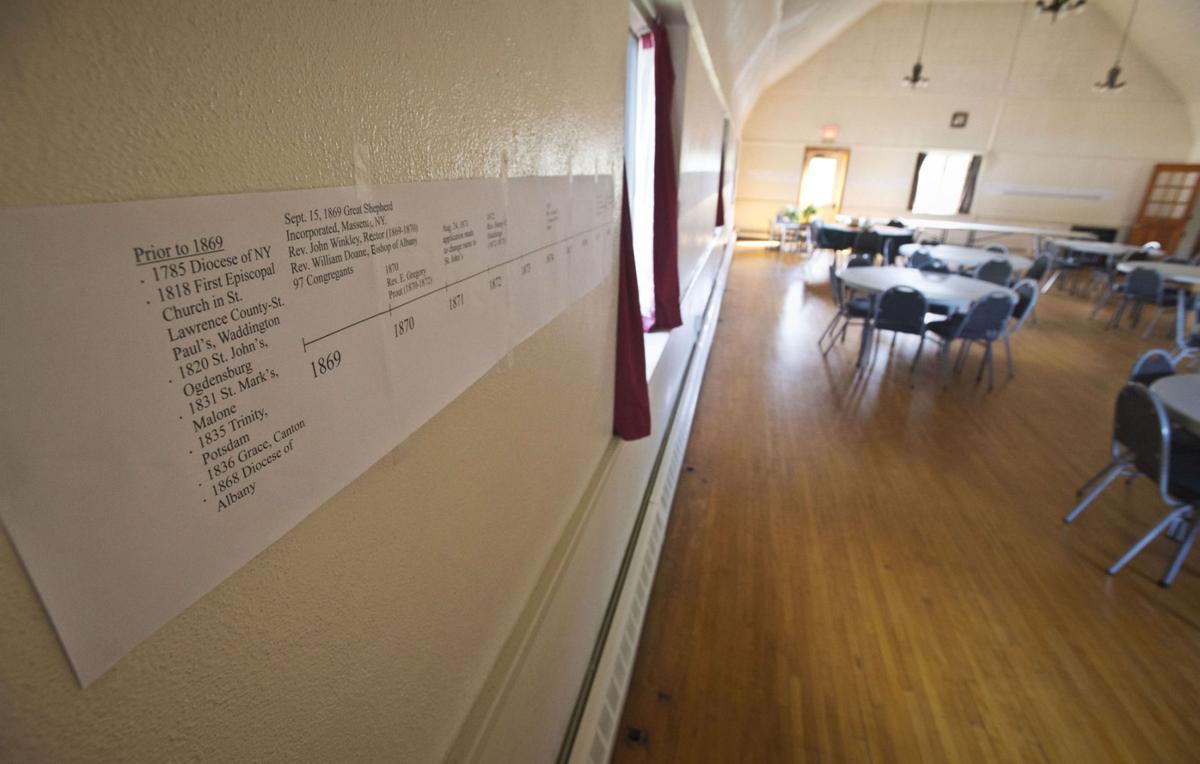 A timeline of the history of St. John’s Episcopal Church stretches halfway around the fellowship hall. Christopher Lenney/Watertown Daily Times 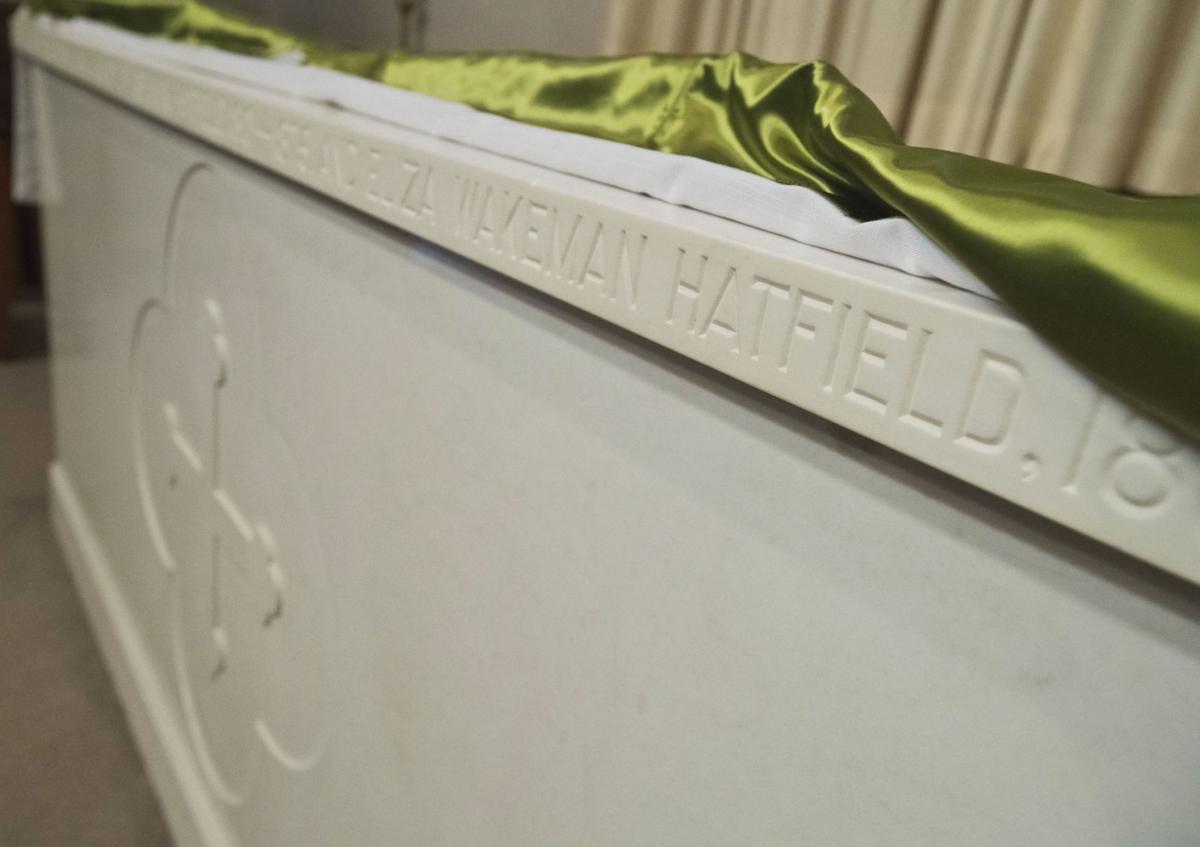 A timeline of the history of St. John’s Episcopal Church stretches halfway around the fellowship hall. Christopher Lenney/Watertown Daily Times

The day will begin at 9 a.m. with a Sunday service, with Eucharist, with the Rev. Barbara Robinson. A social gathering with cookies and drinks in the parish hall will run from 2 to 4 p.m. Displays will include a timeline showing significant events in the history of the world, Massena and St. John’s. There will also be historic photos, documents and biographies of past rectors, as well as time to share memories with friends and neighbors.

A church tour of the windows and tapestry will be held from 2:30 to 3:30 p.m. The tour, which will be led by the Rev. Sonya Boyce and Miriam Morrow, anniversary committee chair, will highlight the significance and history depicted in the pictures of the stained glass windows.

“We’ll start at the tapestry and talk about all the windows,” the Rev. Mrs. Boyce said.

The tapestry commemorates the Armenian Holocaust, and was donated by Massena’s Armenian community to St. John’s in 1985. Armenian families have been an important part of Massena and St. John’s for more than a century.

“When the Armenian holocaust happened, by 1915, 1918, there were 300 families here in Massena in St. John’s Church. At this point we have one remaining person. He’s a remarkable man,” she said.

Members of the Armenian community shared their stories for the tapestry, which was created in the mid-1980s. Among the various depictions are peacocks that are the symbol of resurrection, and a grapevine that signifies “I am the vine.” The top of the tapestry reads, “Faith and hope.”

“This was created out of them telling their story. Yes, you start with the Bible. That is the story. Then you see how the story is lived out in all the people,” the Rev. Mrs. Boyce said. “Every Armenian family donated some money to make that tapestry. So there’s much of them in that tapestry.”

The stained glass windows also have historical significance, which will be discussed during the tour. Blue glass in the windows is the last of its kind because the factory was bombed during World War II.

“They’re here. We see them every Sunday, but we don’t pay any attention to them,” she said.

The church itself is in the shape of an ark.

“Jesus sent the ark to save the faithful people, and the church is in the shape of an ark. There is where we come to be saved,” the Rev. Mrs. Boyce said.

When the story of St. John’s began, services were originally held at various locations, including the town hall, Masonic lodge, Massena Springs and even Barnhart Island.

“Laura Orvis donated this piece of property and we built the first church here,” she said.

The first regular Episcopal services in Massena were held on June 21, 1868 in the town hall. The first communion was administered on Aug. 16, 1868 in the town hall. A meeting of the male members was held on Sept. 13, 1869 to organize a parish. The first meeting of the corporation was held on Sept. 21, 1869, and steps were taken to apply for admission to the Diocese of Albany. The parish was admitted into union with the Convention on Sept. 27, 1870.

She said it’s been enjoyable to hear the people tell their stories and to look back at the church’s history.

Although the church is celebrating 150 years, the religion has been around for much longer.

“Two thousand years is amazing. When you think about it, we’re just a little blip in the picture. It’s the same Jesus that we worship. It’s about celebrating Jesus. He’s still alive and well. He’s still with us. He promised he would be and he is,” she said.

St. John’s will celebrate the church’s future on Nov. 16 and 17. At 2 p.m. Nov. 16, Bishop William Love will ordain the Rev. Mrs. Boyce to the priesthood and install her as the church’s new priest. The bishop will bless and rededicate the church at the 9 a.m. service on Nov. 17.