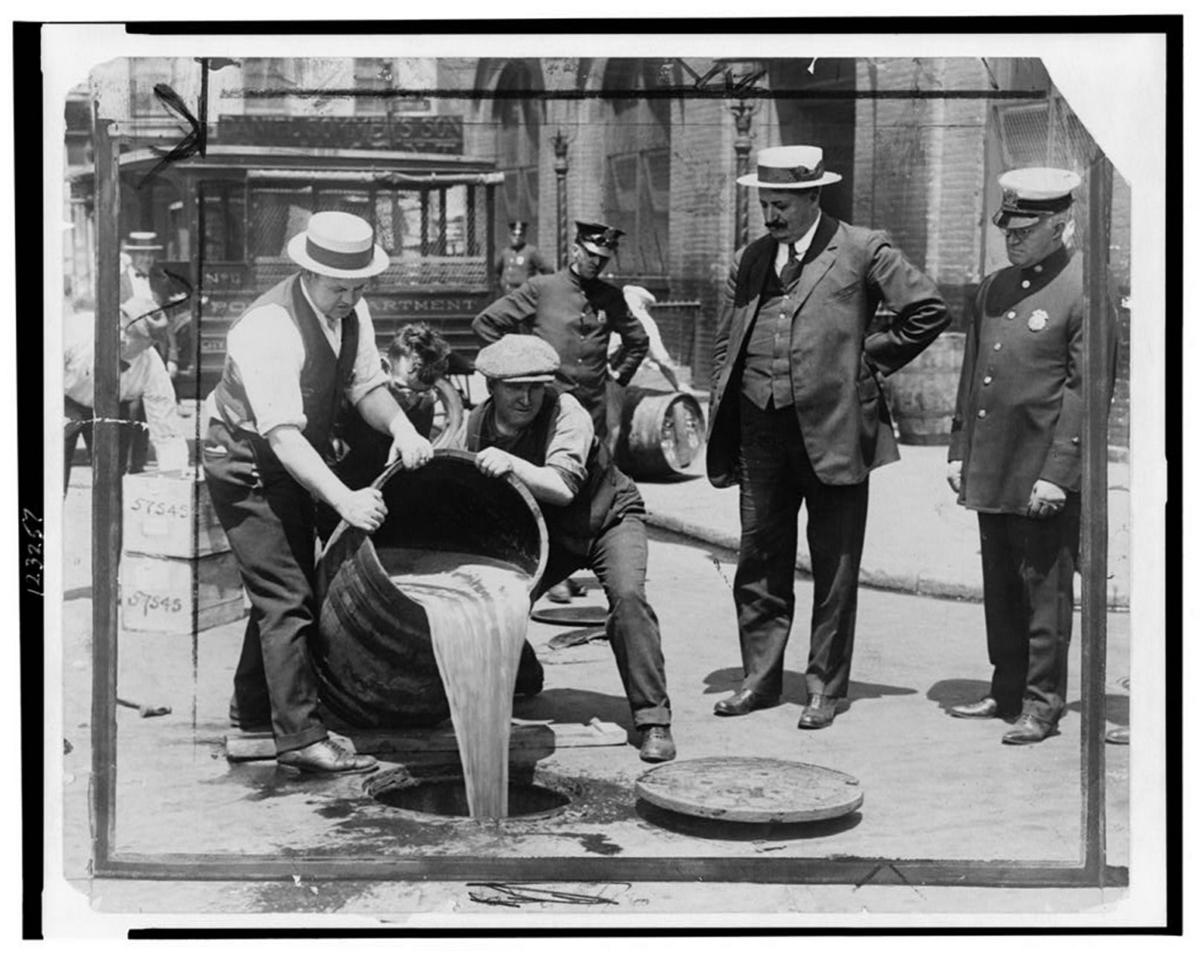 New York City Deputy Police Commissioner John A. Leach, right, watches as agents pour liquor into a sewer following a raid during the height of Prohibition. Much of the booze that came across the St. Lawrence River from Canada ended up in New York City. Library of Congress 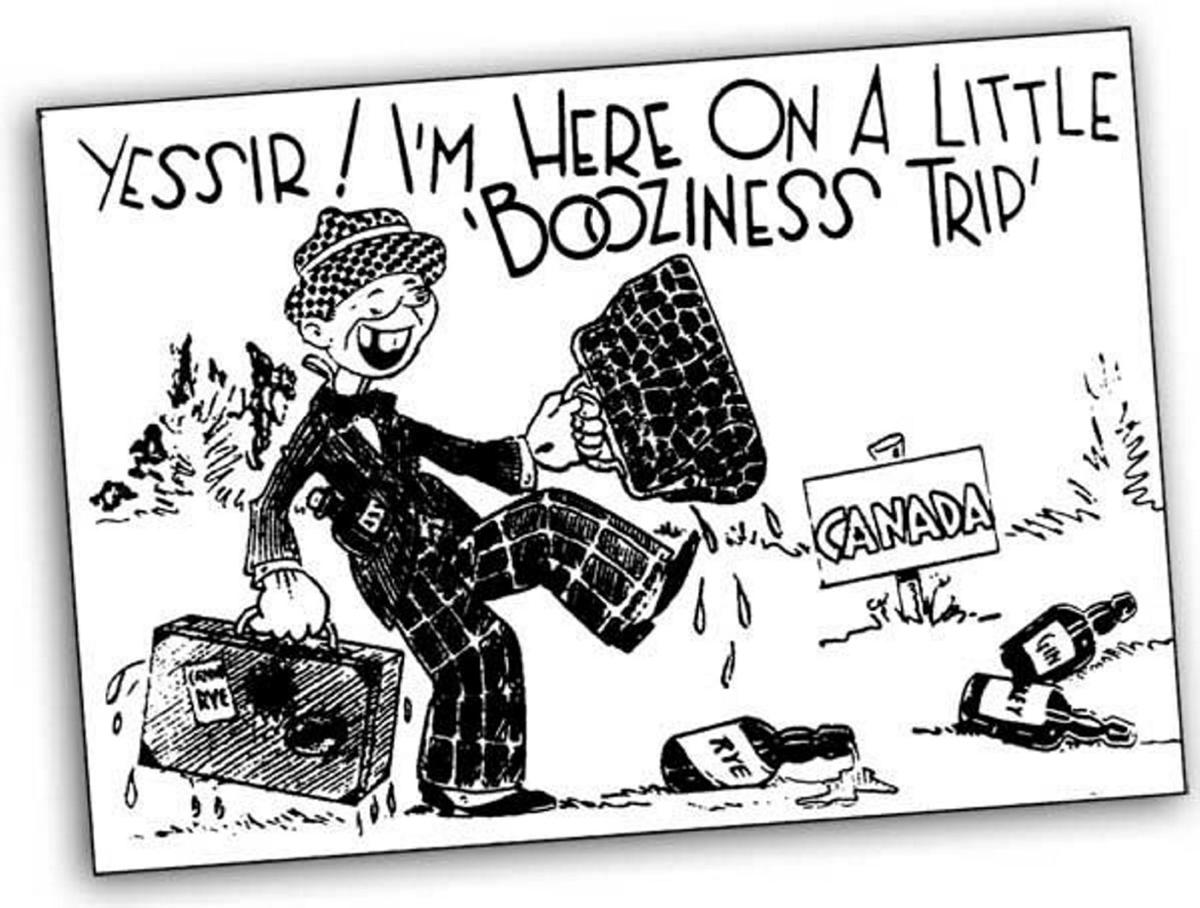 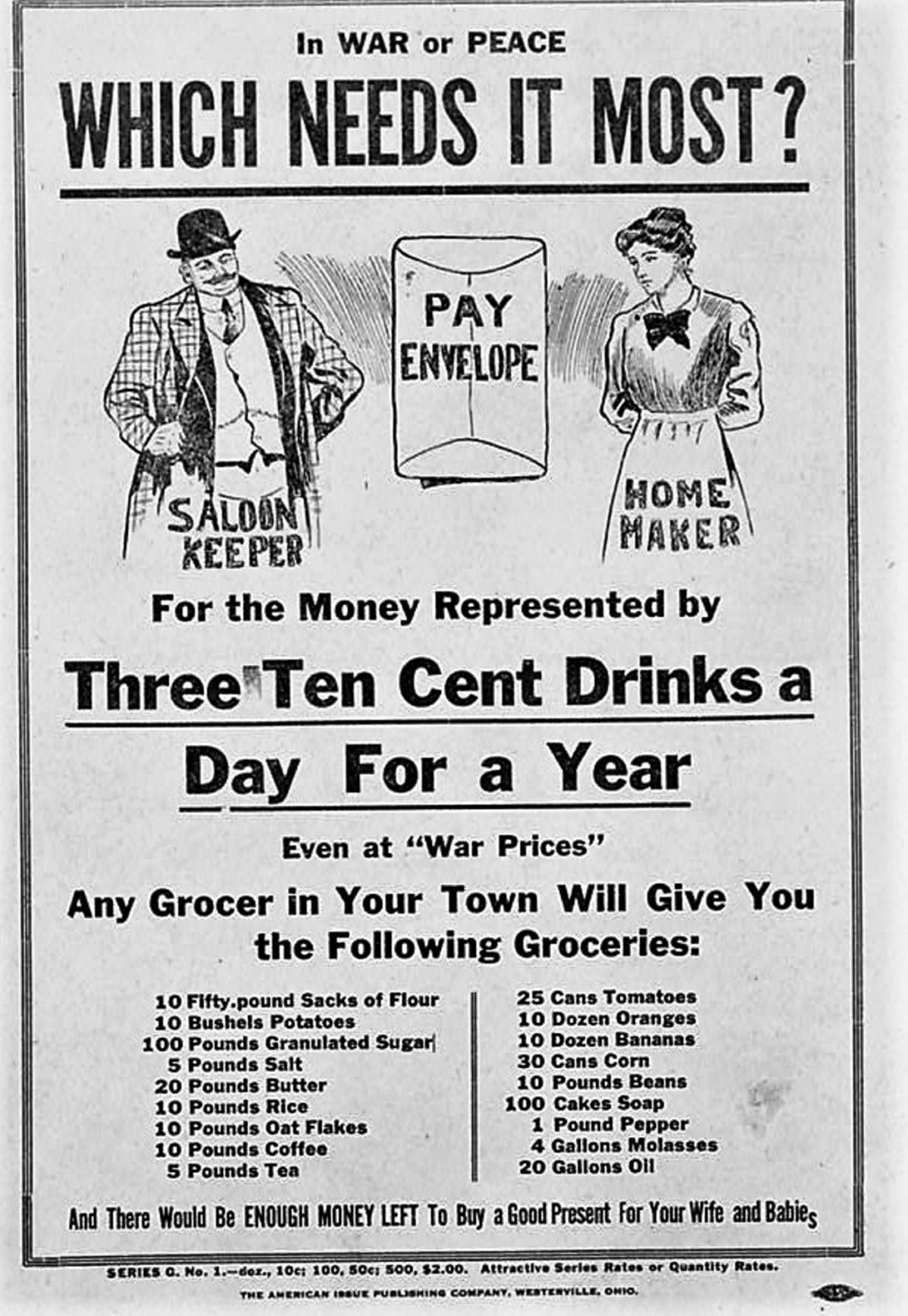 A 1917 poster promoting Prohibition depicts a pay envelope, saloon keeper and homemaker, showing list of groceries that could be purchased with the money used for drinks “and there would be enough money left to buy a good present for your wife and babies.” Library of Congress 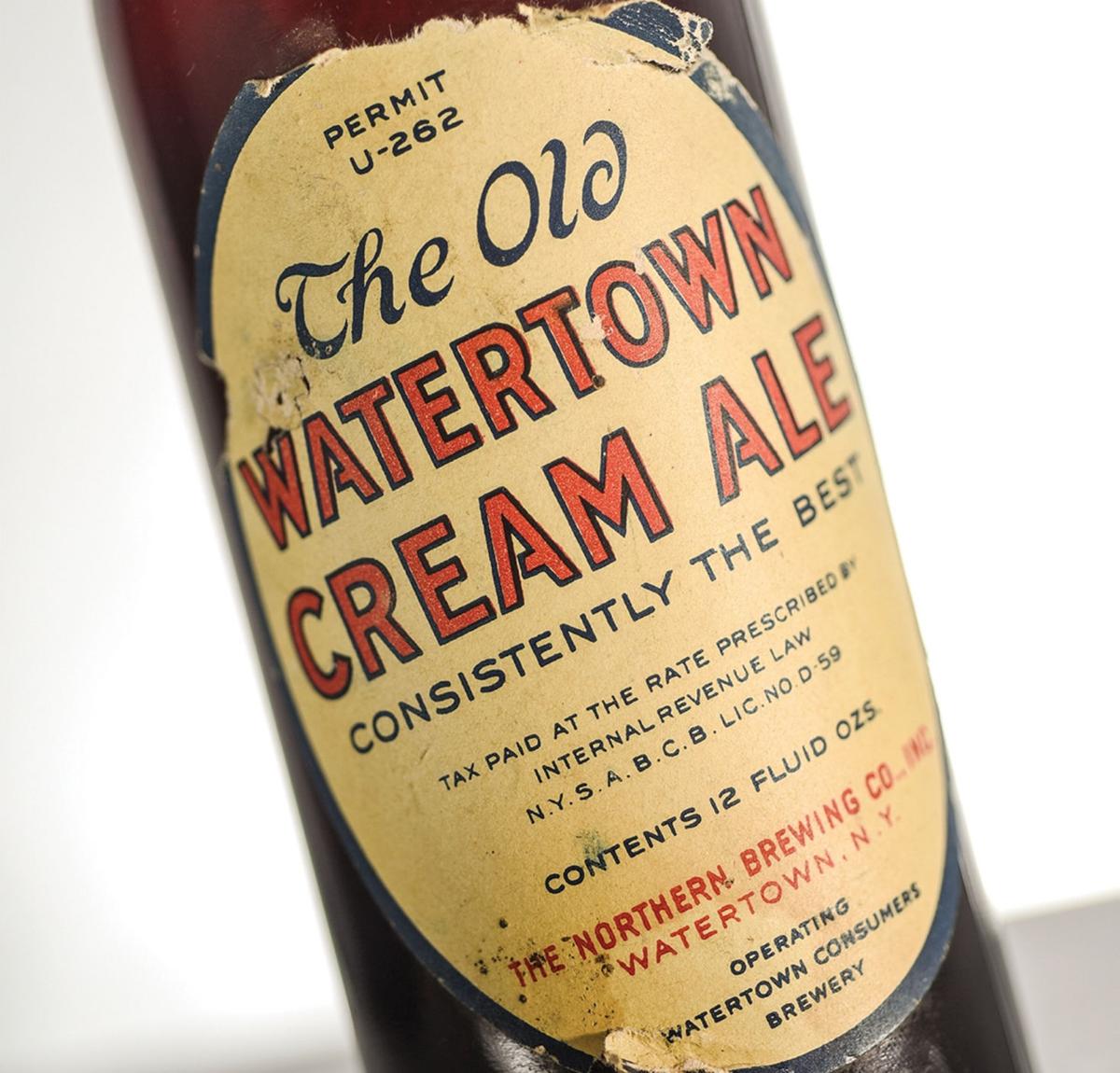 New York City Deputy Police Commissioner John A. Leach, right, watches as agents pour liquor into a sewer following a raid during the height of Prohibition. Much of the booze that came across the St. Lawrence River from Canada ended up in New York City. Library of Congress

A 1917 poster promoting Prohibition depicts a pay envelope, saloon keeper and homemaker, showing list of groceries that could be purchased with the money used for drinks “and there would be enough money left to buy a good present for your wife and babies.” Library of Congress

WATERTOWN — During the days of Prohibition, those tasked with enforcing it were at times as creative as the scofflaws who ignored and resisted it.

In 1921, one team of “revenue agents,” working as a trio, literally sniffed out violators in the dance halls of the Watertown area. The principal member of the team was a woman with a heightened olfactory sense who also happened to be a pretty good dancer.

The woman of the party, a “comely miss,” would easily find an eager dancing partner at local dance halls.

“As they whirl through the mazes of the dreamy waltz or the snappier steps of the jazz, the woman gets a whiff of her partner’s breath,” the Times reported. “If it bears evidence of having been in close contact with that which is forbidden by the Volstead Act, she notifies her two companions and they trace the possessor of the breath in an endeavor to find out where he gets his liquor.”

That tale from the Prohibition era is one example of how the north country dealt with Prohibition, the Volstead Act, in effect from 1920 to 1933.

The following are other Prohibition tidbits from the era found in the Times’ files.

n Watertown and other areas were actually “dry” before Prohibition. Alcohol was banned in Watertown on Nov. 1, 1918 after a special election. It was also banned in other communities during the final days of World War 1 as the nation sought grain to produce food rather than alcohol.

“It is an indictable misdemeanor to have any intoxicating liquors in one’s possession in Watertown after today,” the Times reported Sept. 30, 1918. “The penalty is a fine not exceeding $100 nor six months in jail.”

n The owners of the Watertown Consumer’s Brewing Company used a cold-filtering process to brew high-alcohol beer during Prohibition, instead of the legal “near beer.” The company later became known as the Northern Brewing Company.

Sometime between 1919 and 1928, the owners of the brewery had constructed a secret cold-distilling and bottling operation worth $50,000, concealing it in a garage. Federal Treasury Agents were amazed. In March 1928, brewery officers Frank R. Winslow, then of Chaumont, and John O. Dempsey found themselves in jail on $5,000 bond, accused of shipping real beer out of their near beer cold storage area in the dead of night. Federal officials had found two huge vats in the basement of the brewery, where cold water, malt, hops and yeast were being mixed and allowed to ferment slowly into high-alcohol beer.

Also in 1925, The New York Times referred to Watertown as a “hub of illegal shipments.”

Brewery owners Frank Winslow and John Dempsey were eventually arrested following a raid at their illegal brew house on Poplar Street. In 1928, a Times article announced, “At 11:30 this morning, the last drop of high-test beer at the Poplar Street plant gurgled out of an open spigot in a vat and disappeared into a sewer outlet in the basement of the building.”

After Prohibition, Northern Brewing Company reopened its doors. In 1933, the brewery was continuing its unique filtering process and producing beer like before. But the company lasted only a few years before failing.

n Churches opened their doors on Jan. 16, 1920 to welcome, and perhaps pray for, Prohibition. In Lowville, a “watch night” was held at the Baptist church. Various church pastors spoke. “At midnight, church bells will be rung and whistles blown,” the Times reported. Similar activities were held at the First Baptist Church in Watertown.

n Clayton was a convenient place for bootleggers to smuggle their goods into this country because regular ferries ran back and forth from the village of Gananoque, Ontario and several trains ran between the village and New York City.

n One report noted ale that was brought over from Canada cost $3.25 per case in that country, but sold for $9 (about $155 today) a case here.

n On a weekend in July of 1932, federal agents raided a local speak-easy in Alexandria Bay on a weekend when a convention of Spanish American War veterans were in town. During an initial raid, a crowd began “beating and kicking two of brace officers until they required assistance from the state police,” the Times reported. “The agents returned two days later, one reportedly keeping 200 locals at bay with his revolver as the others ripped apart an establishment while searching for illegal intoxicants.”

n In winter, bootleggers could ride their vehicles across the frozen St. Lawrence. At least one other strapped on skates for smuggling activities.

One such “wil-o-the-wisp,” with hands full, was described by the Times as baffling agents with nightly 20-minute skates out of Ogdensburg to Prescott, Ontario.

n Local boat builders created boats designed for smuggling. One popular story involves the narrow channel between the foot of Wellesley Island and the head of Mary Island. Boot-leggers’ specially built narrow craft could fit through at full speed, while “revenuers” chasing it would end up on the rocks.

n Boats could have nets suspended from outside filled with booze. If chased, the nets could be cut and the cache later retrieved.

n During Prohibition, the city of Watertown passed its own related law. Law, No. 6, the Kelly law, in 1924. It was passed within a year of when New York State repealed the Mullan-Gage Act, which incorporated the Volstead Act into state law. It was a failure and repealed in 1923.

“It’s hard to understand the reasoning behind it, but some people in charge of the city of Watertown felt that the law (Prohibition) should be enforced and they had a lot of power, so they passed their own law,” said historian Lawrence P. Gooley, author of “Bullets, Booze, Bootleggers, and Beer: The Story of Prohibition in Northern New York, Volume 1 — 1920-1926.”

“This wasn’t done in any other town or city up north,” Mr. Gooley said. “Only Watertown passed their law, so they could use city resources to enforce Prohibition.”

This could be an advantage for people in the city facing charges under Prohibition, Mr. Gooley said.

“One way it helped bootleggers is that if you got caught near Watertown, you could be processed right there, fined, and the feds didn’t dare prosecute you because it might be double jeopardy,” he said.

While growing up in Champlain, Clinton County, Lawrence P. Gooley was given some words of advice by his mother.