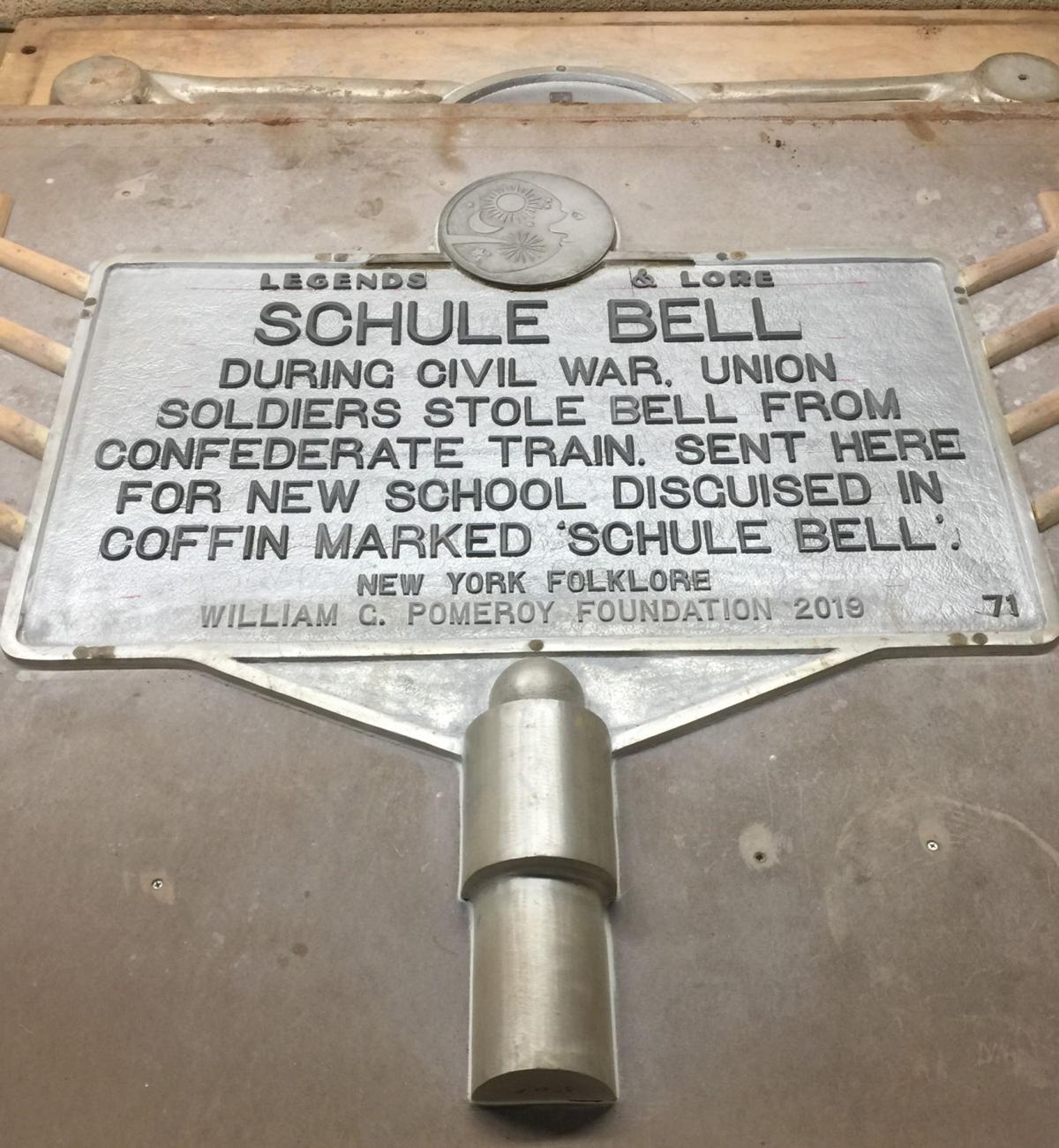 The casting of the marker for the legend of the “Schule Bell,” scheduled to be installed in Theresa in the spring. When complete, it will be deep red with beige lettering and border. Pomeroy Foundation 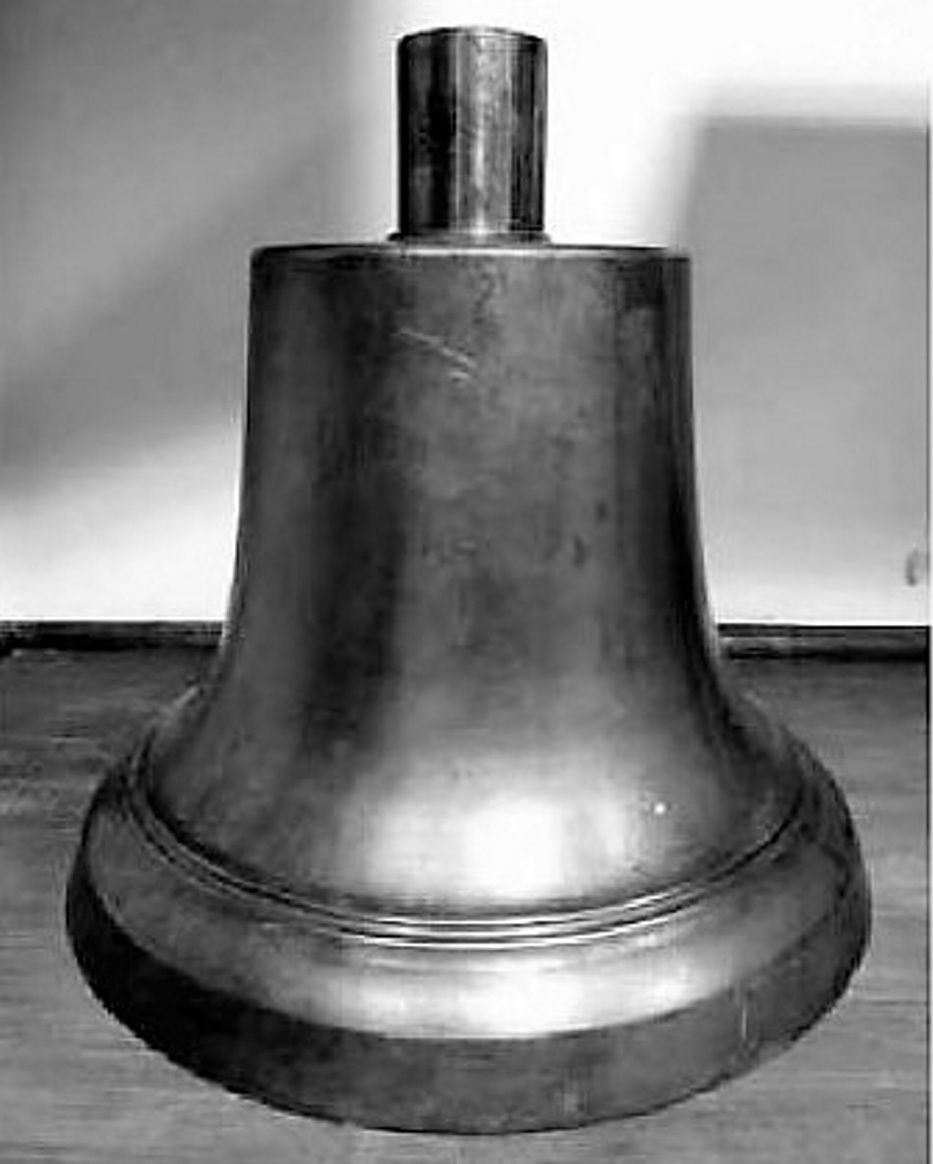 The “Schule Bell,” which came from a Confederate train, is housed at Theresa Primary School. Pomeroy Foundation 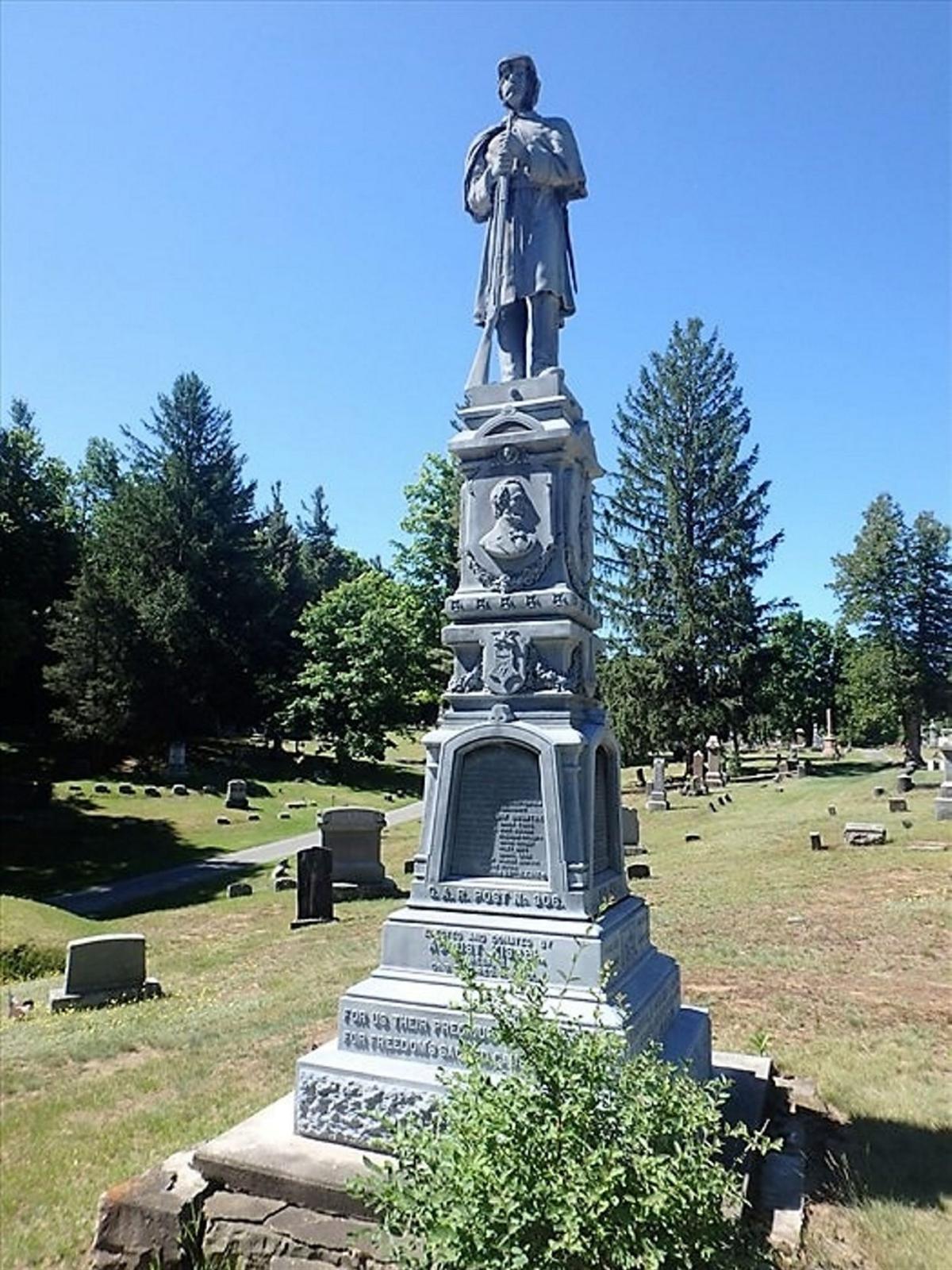 The historic marker from the Pomeroy Foundation’s “Legend & Lore” marker grant program about the “Schule Bell” will be installed in Oakwood Cemetery, Theresa, in the shadow of a war monument dedicated in May of 1911. waymarking.com

The casting of the marker for the legend of the “Schule Bell,” scheduled to be installed in Theresa in the spring. When complete, it will be deep red with beige lettering and border. Pomeroy Foundation

The “Schule Bell,” which came from a Confederate train, is housed at Theresa Primary School. Pomeroy Foundation

The historic marker from the Pomeroy Foundation’s “Legend & Lore” marker grant program about the “Schule Bell” will be installed in Oakwood Cemetery, Theresa, in the shadow of a war monument dedicated in May of 1911. waymarking.com

THERESA — The story of “Schule Bell” will ring with greater prominence here when a historical marker is placed in the spring, thanks to a private grant-making foundation based in Syracuse.

In April of 1865 in the final days of the Civil War, legend has it, a train brought yet another coffin to Philadelphia, destination Theresa, which didn’t have railroad service yet. The box was removed from one of the train’s cars by an honor guard. The coffin was then put on a horse-drawn wagon for its next destination. But it wasn’t to a graveyard. Those receiving the container had no intention of burying what was inside.

Out of sight of the military escort, those receiving the coffin finally pried it open. Inside, as anticipated, was a bell for the new Theresa “schule,” courtesy of Union soldiers’ conspiracy against a Confederate locomotive, from which the bell was taken. The bell’s clapper had been removed and cushioned, while a large log gave the coffin the weight of a body.

The bell heist had its roots when at least one of the soldiers learned that a school about to open in his home town of Theresa needed a bell for its new schoolhouse.

The story, as retold in the 1992 book “Whispers From the Past” by Harold I. Sanderson, a local historian who died in 2013, had its roots in Petersburg, Va. Union soldiers were aware of a train engine that had become partially submerged in the James River after Union forces destroyed a section of railroad. An 80-pound bronze bell mounted on the locomotive should toll well for the new school back home, one of them thought. So the trio snatched their trophy from the disabled train. One of the three, a mortician’s assistant, thought upon the idea of sending the bell home in a coffin.

According to the Times’ files, the bell was taken from the locomotive by Otis Brooks, a soldier from Theresa who was also a contractor in town. He sold the bell to the Theresa School District for $50. A 1938 Times’ report on the bell said it had been in use for the past 69 years — from 1869, when the school opened. The bell has been housed in the Theresa Primary School (formerly Theresa High School) since 1938.

A 1935 Watertown Daily Times story noted a less glamorous story on the origin of the bell, but with just a few details:

“A soldier from Theresa walked out on the southern engine (of the swamped train) and succeeded in removing the bell and making it his property. By carefully boxing the bell in other articles and marking it personal, he managed to ship it north to Theresa.”

The town of Theresa has received a grant from the Pomeroy Foundation to obtain a “roadside” marker that will feature the basics of the “Schule Bell” legend. The marker, now in production, is part of the foundation’s Legends & Lore marker grant program. The Pomeroy Foundation, which helps people celebrate their community’s history, provides grants that cover the entire cost of a marker, pole and shipping.

The marker is a milestone for the foundation. It’s the 1,000th sign it has created.

It will be installed near a Civil War monument in the town’s Oakwood Cemetery. That monument, on a rise of ground not far from the cemetery’s entrance off Cemetery Road, was gifted by local Civil War veteran August Kissell and dedicated in May of 1911.

At one time, there apparently was a small monument noting the “Schule Belle” at Oakwood Cemetery. It has since disappeared.

“I’ve gone through Oakwood Cemetery with a fine-tooth comb, but I can’t find it,” said Timothy S. Minnick, Town of Theresa Historian.

“If nature cooperates, we’d love to have it Memorial Day weekend,” said Mr. Minnick, of Syracuse. “We’re not going to know until I get up there and start leveling stones around the marker and there’s a little bit of cement work underneath that the town needs to patch up. They’re going to get to that as soon as it gets warm enough.”

Mr. Minnick said that once installed, the monument will add to the Civil War lore that can be found in Theresa.

“We have a lot of artifacts in the Theresa Free Library from the Civil War,” Mr. Minnick said. “There’s a drum, muskets, pictures and swords. Civil War is big on tourism. People don’t have to travel to Gettysburg to get a taste of the Civil War. That’s what we would like to do.”

In addition to the war monument at Oakwood Cemetery, there’s one at the intersection of Main Street and Riverside Avenue in Theresa featuring a 15-foot Civil War soldier. The site also includes a cannon and the location also honors veterans of the Spanish-American War of 1898.

“Funding our 1,000th marker is an exciting moment, especially as we celebrate the foundation’s 15th anniversary this year,” Deryn Pomeroy, trustee and director of Strategic Initiatives for the Pomeroy Foundation said in a news release.

Ms. Pomeroy said the foundation has seen firsthand the benefits and impact its markers have on communities.

“Markers help preserve history, educate the public, encourage pride of place and enhance historic tourism,” she said. “We are proud to support the town of Theresa and all those over the years who have done great work to recognize their history or folklore through our marker programs.”

Mr. Minnick said the marker for the “Schule Bell” will inform generations of people for years.

“With the transient nature of the north country and Fort Drum people not having roots, these stories are going to die unless we keep them alive,” he said. “That’s where I really appreciate the Pomeroy Foundation because I’ve heard the legend of the bell since I was a kid, but I bet I probably haven’t heard it in 15 years. Now, people will know it, long after we’re dead.”

New York Folklore is the Pomeroy Foundation’s Legends & Lore partner in New York State and originally helped to found the program in 2015.

“The Schule Bell story of how some creative individuals ‘hoodwinked’ Confederate troops and shipped a heavy bell to Northern New York, falls into the classic ‘trickster’ type of story in which wits and guile are used to effect a good outcome,” Ellen McHale, New York Folklore’s executive director said in a news release. “The Schule Bell story is just one example of the many important pieces of local lore and history often known only within a specific locale. The Legends & Lore marker program provides a wonderful opportunity for communities to share those types of unique stories to reach a wider public audience.”

Among the missions of the William G. Pomeroy Foundation is supporting the celebration and preservation of community history. It also has a mission to raise awareness, support research and to improve the quality of care for patients and their families who are facing a blood cancer diagnosis.

The 40-pound markers, 18-inches-by-32-inches, manufactured by the foundry Sewah Studios, Marietta, Ohio, cost $1,100 and are shipped by UPS with aluminum 7-foot poles. The foundation has six marker programs.

The new marker will be located in the shadow of the zinc 16-foot monument dedicated in 1911 and funded by August Kissell (1842-1923). The native of Germany sailed for America at the age of 15 and settled with family in Theresa. In the Civil War, he was a member of the 94th New York Volunteer Infantry regiment and fought in several battles before becoming a prisoner of war in Salisbury, N.C. He managed to escape from the Confederate POW camp in January of 1865 and made his way to Union lines at Knoxville, Tenn. After the war, he became a dealer in monuments.

His grave site is also near the soldiers and sailors monument he gifted in 1911. Among the many features of the monument is a base-relief figure of Abraham Lincoln.

At the monument’s dedication ceremony in 1911, according to Times’ files, Mr. Kissell told the crowd:

“I am glad to be with you here today. I am glad I was able to erect this monument in honor of our services and those of our companions who have gone before us; and I can only say that it is the greatest pleasure that I have, on seeing that monument, that it will bear our names and carry our memories as long as this government shall stand, which I hope will be forever.”

“How poor this world would be without its graves, without the memories of its mighty dead,” Mr. Cobb said. “Only the voiceless speak forever.”