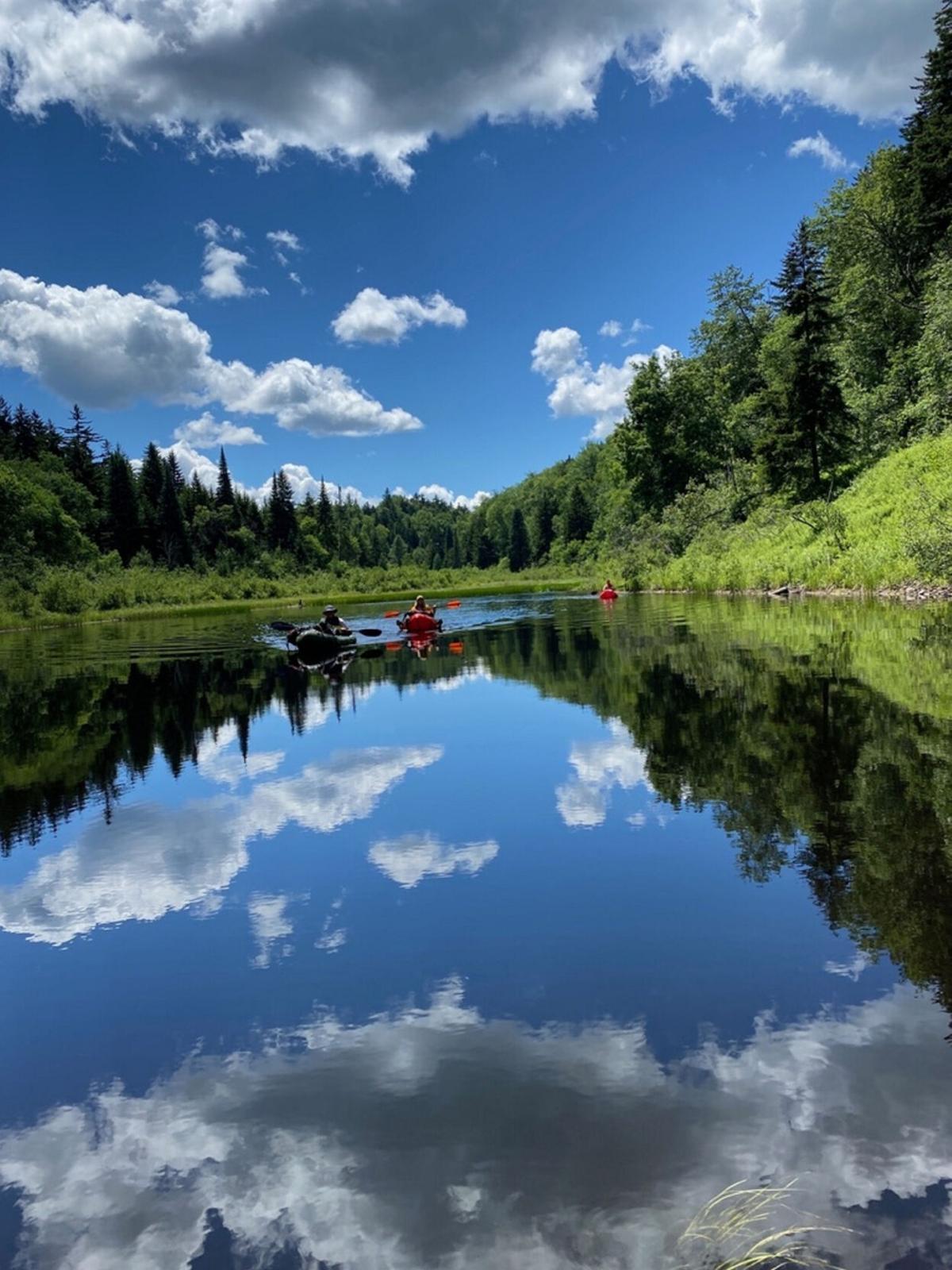 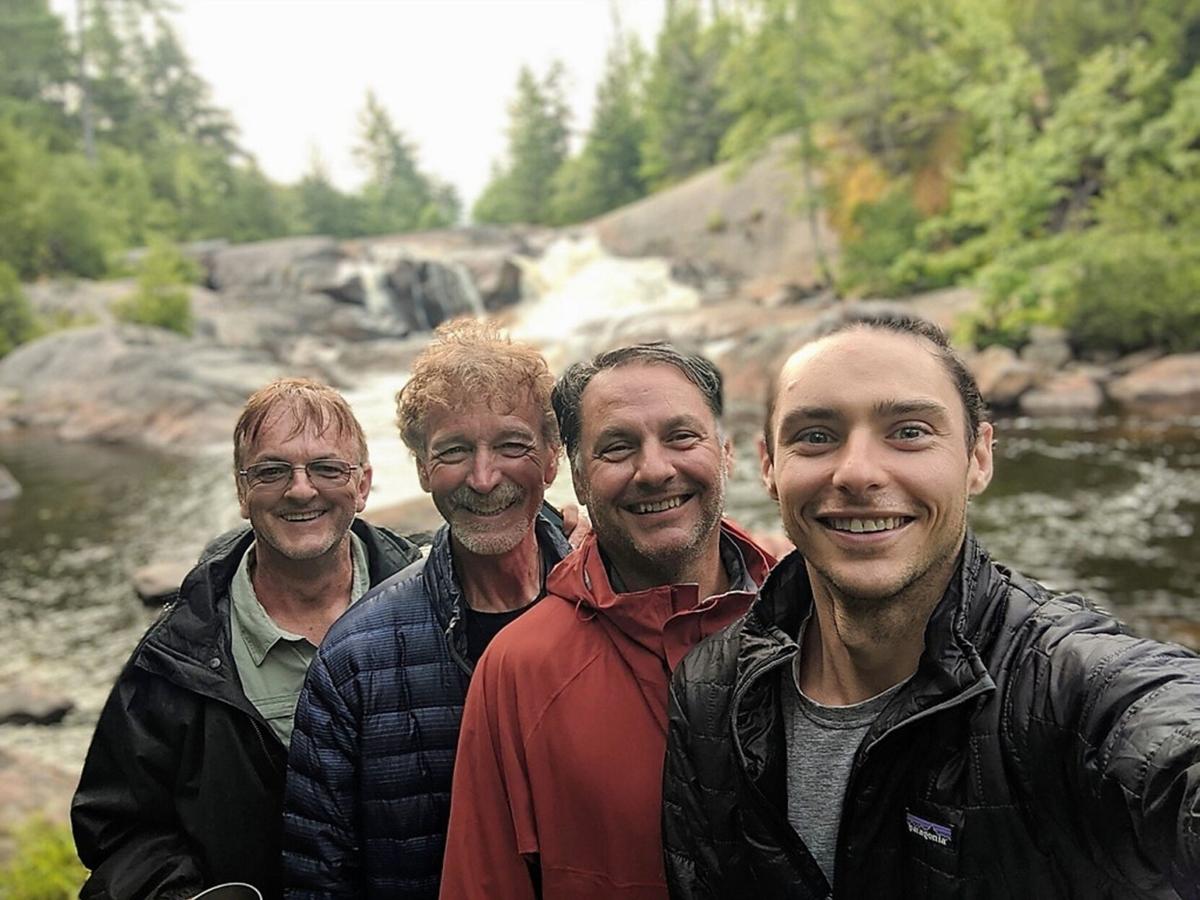 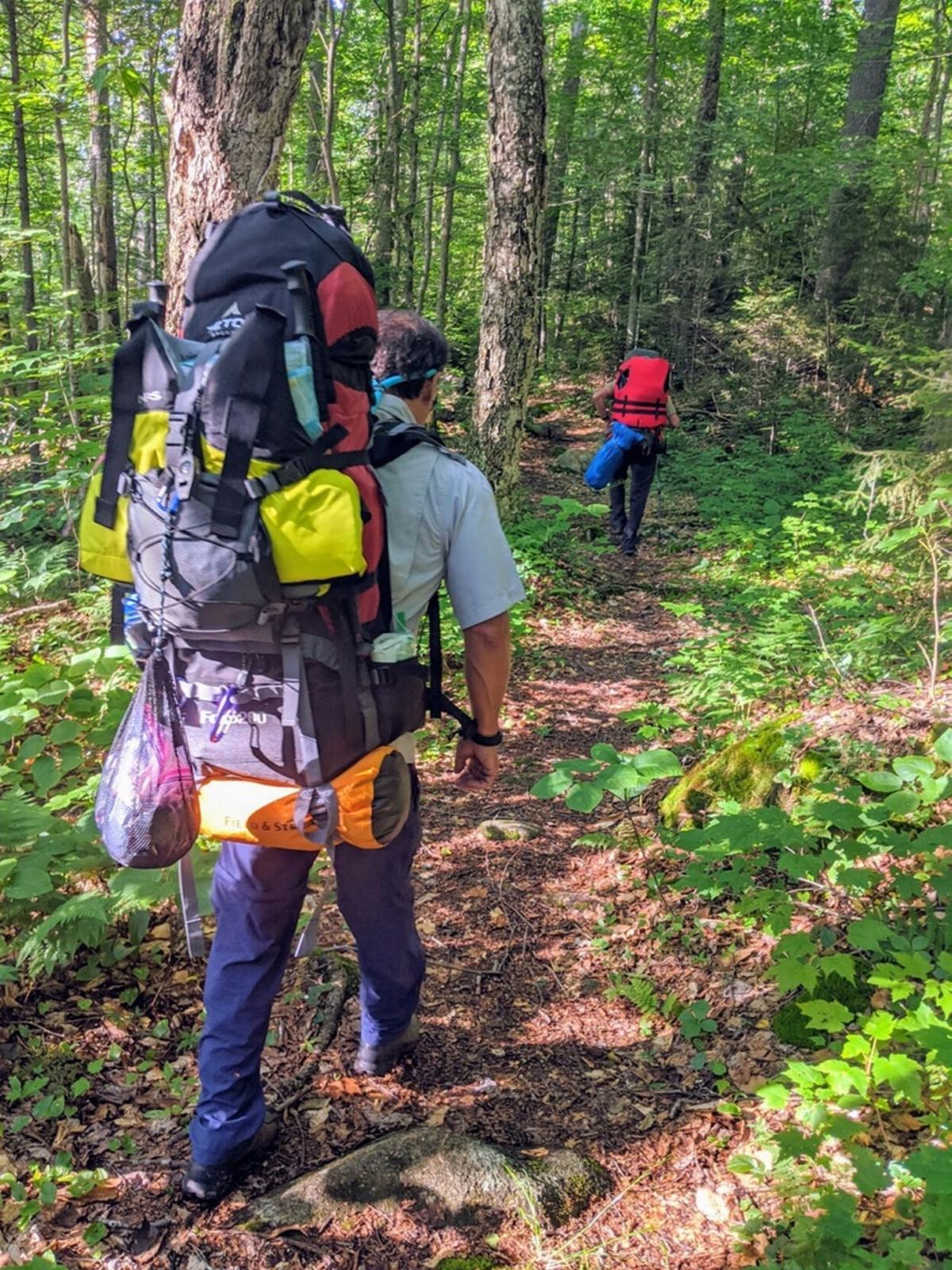 Packrafters hit the trail for the next body of water. Courtesy Dr. David Plante 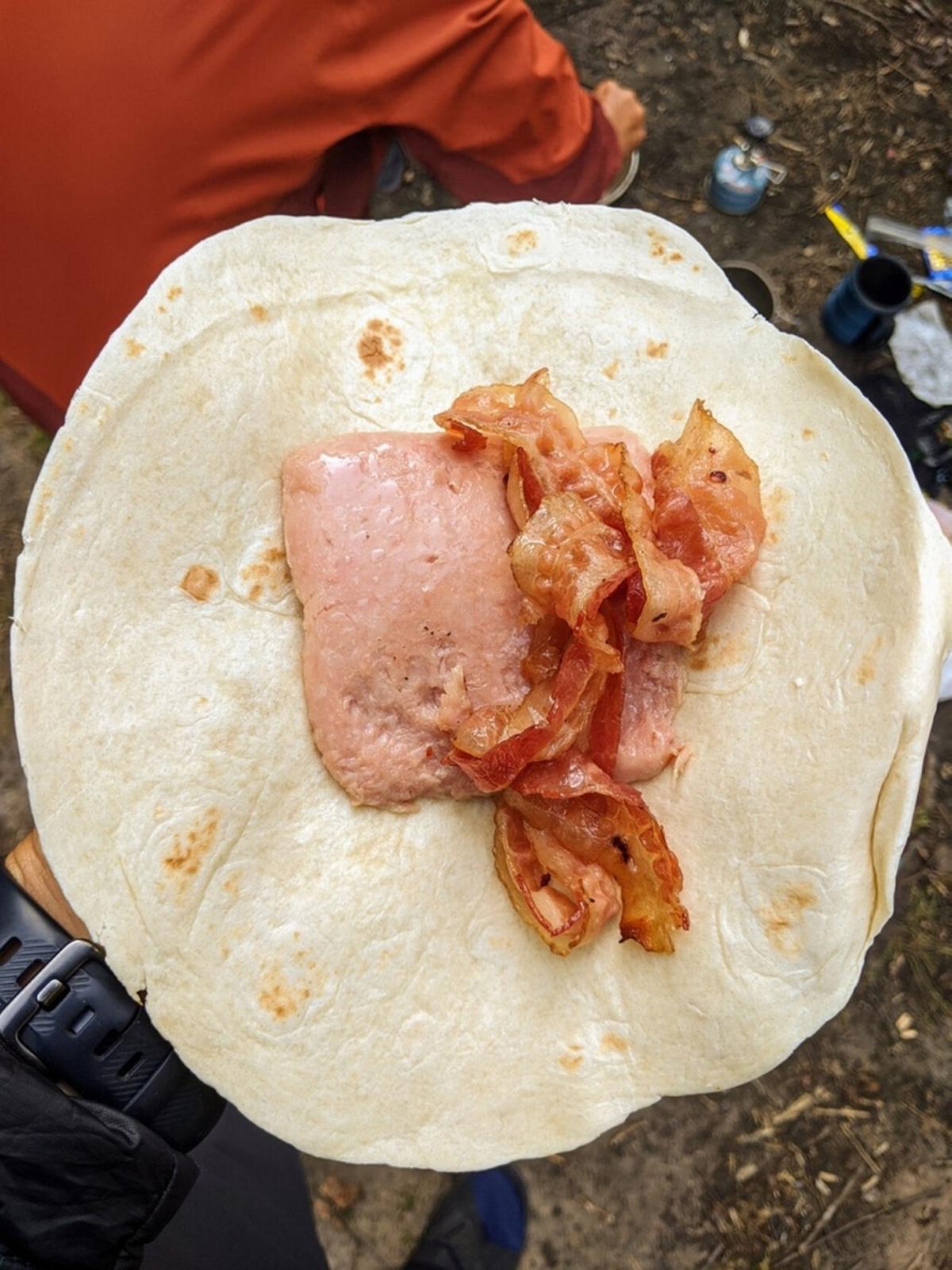 Dr. David Plante is known for his gourmet meals on his adventures, but he also has a Spam tradition. “I didn’t think this perfect breakfast could be improved on until we combined Spam with bacon on a tortilla!” he said. Courtesy Dr. David Plante 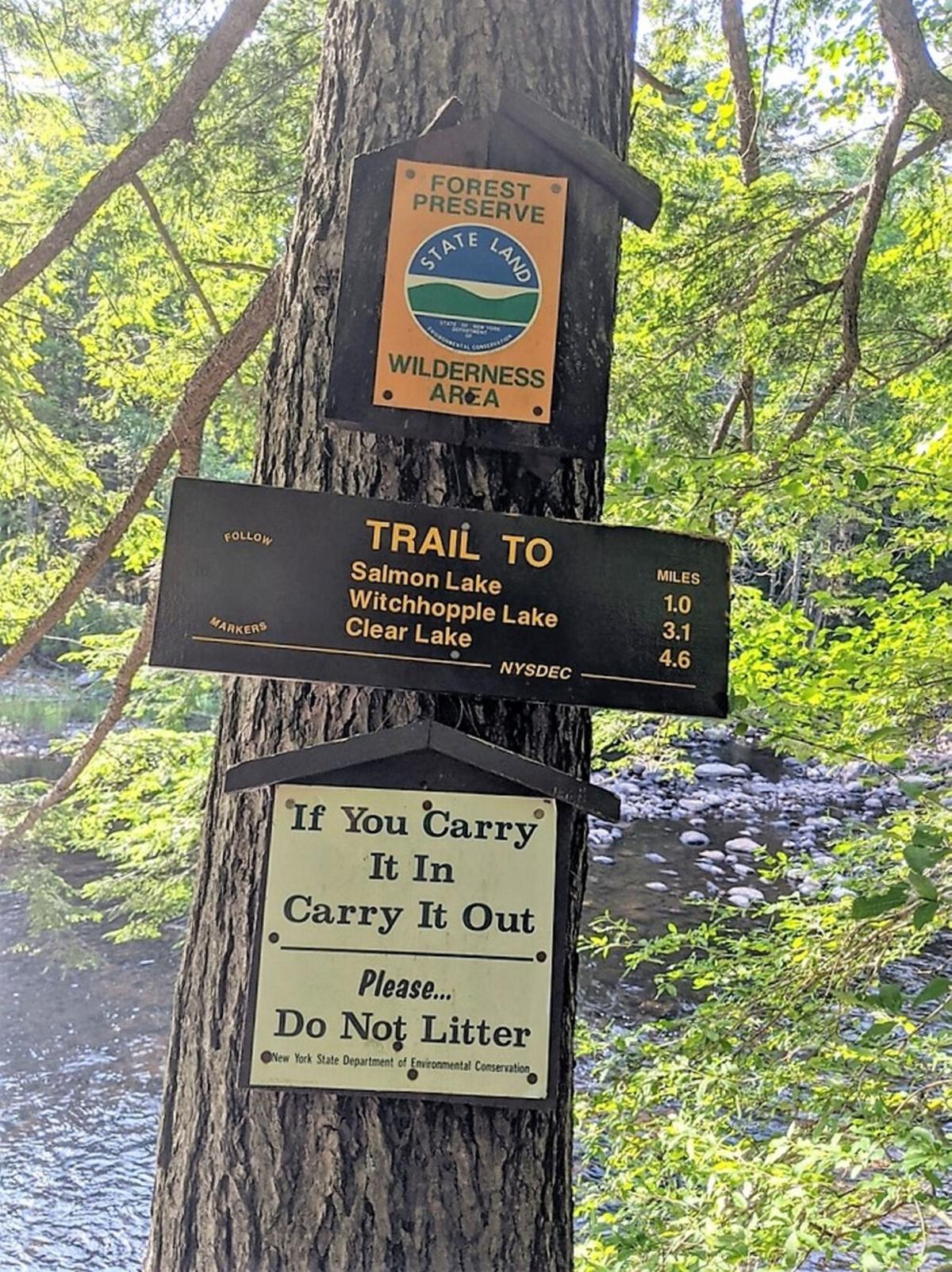 Drying out clothing and supplies at camp along the way. Dr. David Plante 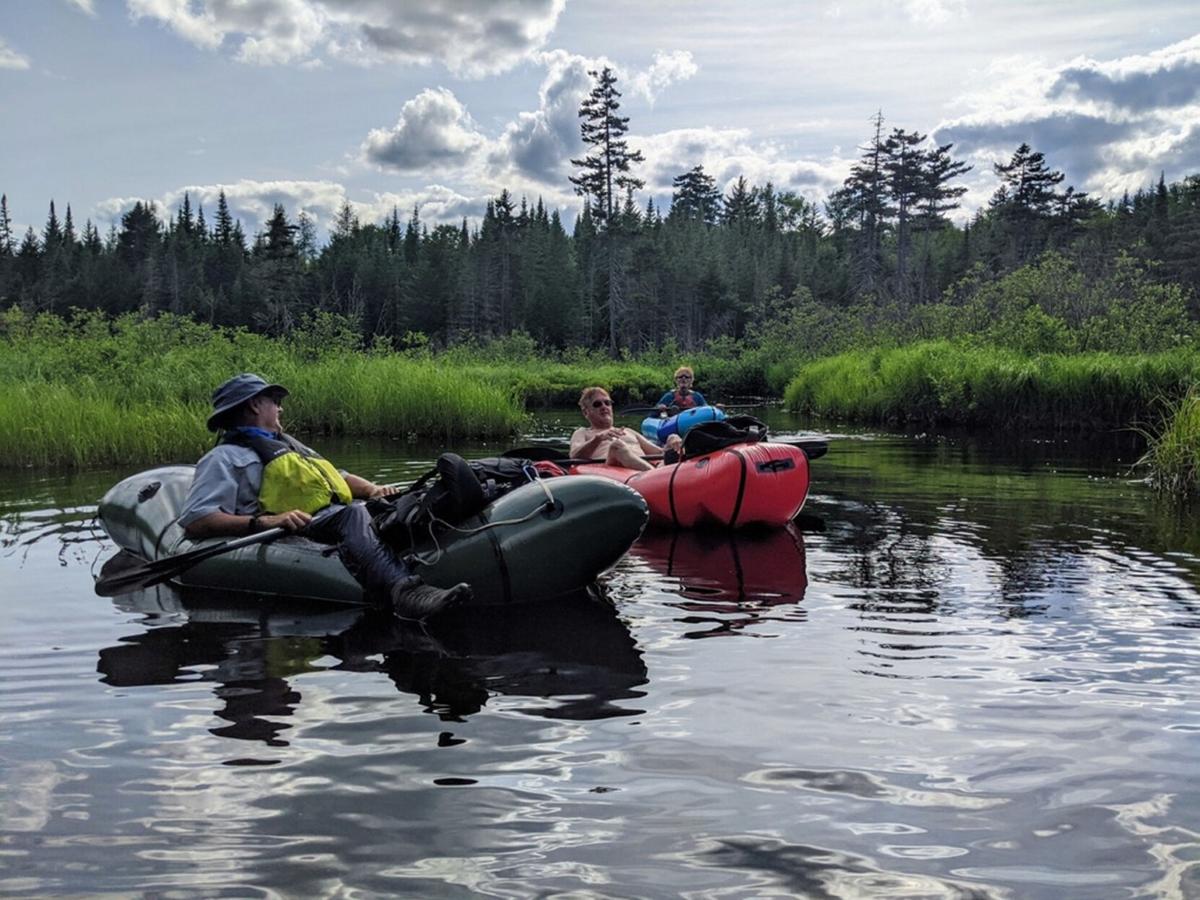 At the Oswegatchie, numerous wetlands and streams contributed to the flow and eventually the group was able to float their rafts. Courtesy Dr. David Plante 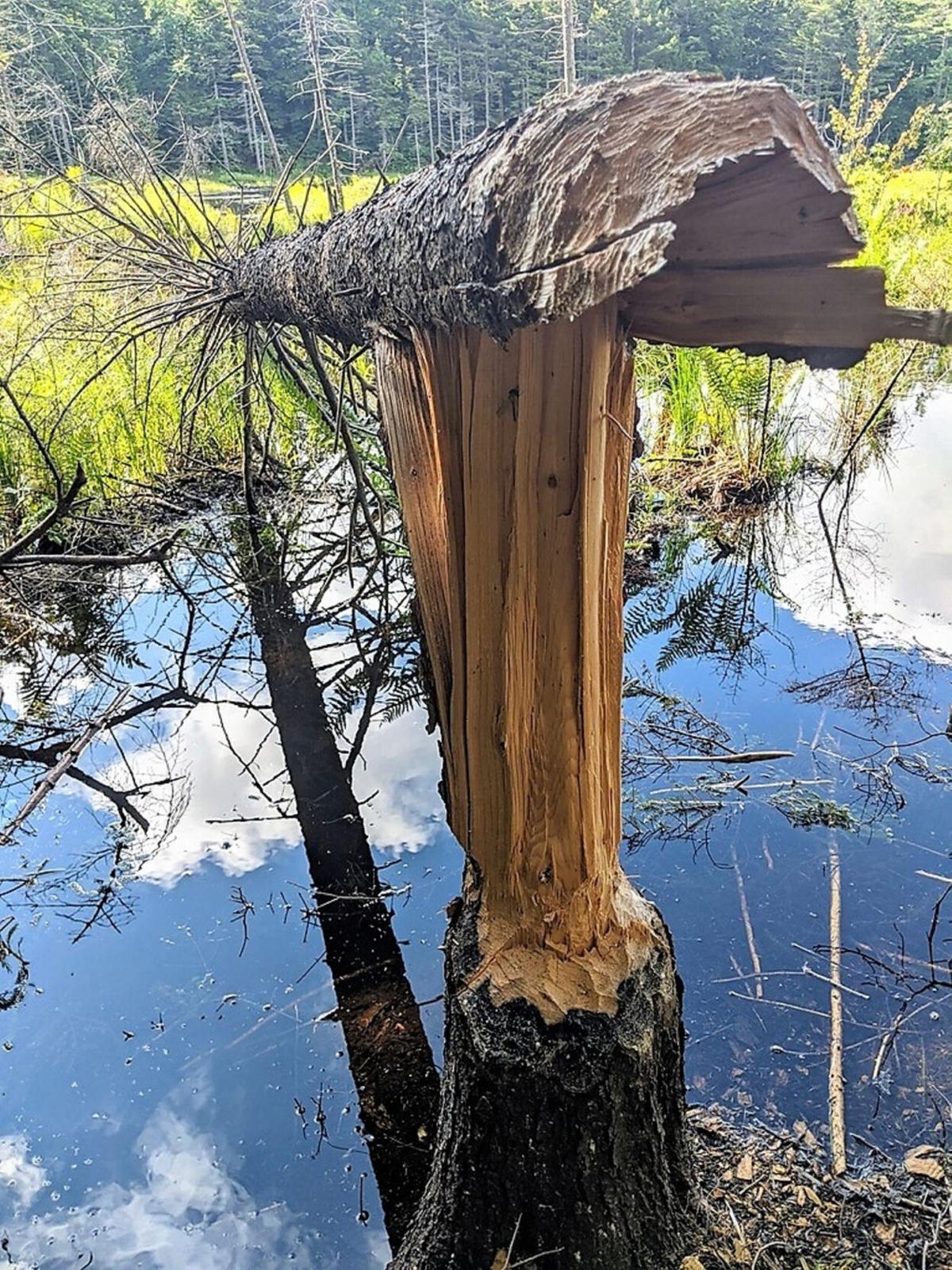 Packrafters hit the trail for the next body of water. Courtesy Dr. David Plante

Dr. David Plante is known for his gourmet meals on his adventures, but he also has a Spam tradition. “I didn’t think this perfect breakfast could be improved on until we combined Spam with bacon on a tortilla!” he said. Courtesy Dr. David Plante

Drying out clothing and supplies at camp along the way. Dr. David Plante

At the Oswegatchie, numerous wetlands and streams contributed to the flow and eventually the group was able to float their rafts. Courtesy Dr. David Plante

In 1922, the Adirondack Mountain Club had completed an epic hiking trail that passed through a pristine primeval forest from the remote hamlet of Beaver River to Wanakena. The trail passed through one of the largest tracts of old growth forest remaining in the Eastern U.S. This trail was called the “Red Horse Trail” Named for a small creek near the southern trail head.

Three years later, in 1925, a controversial hydroelectric dam was built on the Beaver River, raising the water level nearly 20 feet forming the lake we know today as Stillwater Reservoir. This lake has 97 islands and 75 miles of shoreline. There are 46 exceptional campsites along its shore, no fees, first come first served. In the summer season, there may be uniformed students talking and collecting information from you when you arrive to the public boat launch on the west end of the reservoir. The lake is famous for its shoals, many a boater has damaged their props. This map with is available online at: wdt.me/raft_map and contains suggested boat routes.

Over the years, the remote interior sections of the Red Horse Trail were consumed by the forest growth and destructive blowdowns from the 1950 and 1995 microbursts made hiking extremely difficult. Vast flooded plains in the lowlands caused by extensive beaver activity rendered hiking nearly impossible. Biting insects and leeches are more than plentiful.

I’ve hiked and paddled in some of the world’s remotest places and had until now, put local trips on the back burner. With COVID in 2020, everything has changed. I began to have another look at opportunities close to home, I’ve long had an eye on an area known as the “Five Ponds Wilderness Area” in the western Adirondacks. Considered one of the wildest area in the east, an area where far more bear, moose and beaver pass through than do people.

Now, all I needed was some friends to share such an opportunity! My brother, Joe, and close friend Paul Mendez and his son Dan all decided they were up for the challenge. All three were new to both packrafting and bushwhacking! We headed out on July 12 and concluded the adventure on July 16.

Several routes were considered, but since we were packrafting, we decided to modify the Red Horse Trail route to maximize the use of our rafts. We would begin hiking the Red Horse Trail, then paddle across Salmon Lake, bushwhack to Little Rock Pond, and then work our way through the dense forest to the headwaters of the East branch of the Oswegatchie River. Then, in theory, we’d float out to the Inlet parking area where our shuttle (my very understanding wife, Terri) would pick us up.

We used three Alpacka Gnarwhal rafts (sans coaming, spray skirt etc. as no whitewater) and one Alpacka Caribou packraft. I used a Hyperlite Southwest pack setup that I had recently used in jungle packrafting trip in Belize which I found was ideal for bushwhacking.

We loaded all our gear into a 14-feet utility boat with a 25-horsepower motor and shuttled a few miles east to Trout Pond on the northern shore of Stillwater Reservoir. We all watched carefully for shoals. One could easily paddle the rafts to the trailhead if desired. Winds can pick up quickly, and thunderstorms are common in the summer, so that, weighted with time constraints, we opted for the shuttle.

Terri had been practicing trailering the boat and this was her first real experience driving the boat. We said our goodbyes and Terri was off for a scenic and hopefully not too thrilling ride across the lake.

We donned our packs and hiked up a steep bank and quickly found the well maintained Red Horse Trail. We signed in at the trail head and headed toward Salmon Lake. We passed a young man portaging a Grumman Eagle canoe followed by his dad carrying two armloads of fishing gear. Smallmouth bass fishing had been excellent. Most of these waters, at one time, were pristine brook trout fisheries. Unfortunately, many species such as: northern pike, perch and bass were introduced into area lakes and streams and the fishery was permanently altered for better or worse.

Joe and I set up hammocks, Paul and Dan shared a tent. This was a designated camp site with amenities (an outhouse), so a campfire and wine set the tone. The night was surprisingly cool. Dinners were shared amongst the group. We all carried our own breakfast and lunches. I make all my own freeze-dried foods these days. Options are limitless and last 25 years!

I paddled ahead of the group trolling a small spinner, when I realized everyone was well behind. I waited 20 minutes or so for everyone to catch up to hear the bad news that Paul’s right paddle blade had fallen off and sunk to the lake bottom. Dan was towing him across the lake. After a few seconds of disbelief, I traded my paddle for Paul’s broken paddle. I paddled 20-plus miles with half a sea kayak paddle. I’m pretty sure this may have been planned, sort of a handicap to keep me from getting too far ahead. If that was the case, it sure worked! One forward stroke could turn the raft in circles, a strong headwind can make forward movement challenging. No worries, I was up for the challenge (at least that’s what I told them!)

Once we crossed the lake, we packed up the boats, got back on the trail and headed toward Witchhopple Lake. Just south of the lake we donned our compasses and maps and began our first bushwhacking adventure.

Thunderstorms seemed to start on schedule as soon as we entered the forest. My orienteering skills progressed rapidly (largely due to some groans of circling) Expansive beaver wetlands and massive fallen trees from blowdowns were everywhere. The rain and dense canopy made the forest suddenly dark. Deer flies exploded on to the scene. We were heading for a small deep and pretty lake called “Little Rock Pond.”

We entered the lake on the SW end where the reflective water was shallow and splattered with colorful flora such as flowering lily pads and carnivorous pitcher plants.

We were a little disappointed as the rain and cloud cover shielded the beauty of the clear and deep waters of Little Rock Pond. We set up camp at the end of the lake in the rain.

The next morning we began bushwhacking through pristine old growth forest. Massive hardwoods and pines were abundant. Stands of old growth like this are rare. Very few travelers have penetrated this area, perhaps none carrying packrafts. Beaver activity was extensive and our miles were deemed “dog miles” rather than measuring direct distance as we skirted vast beaver meadows.

The bushwhacking was grueling at times with thunderstorms, biting flies, blowdowns and wetlands . We were rewarded at the end of our hike with a campsite with an exceptional view on the east shore of Negro Lake. Moose tracks and scat were common throughout this area. We were surprised of the lake’s name. I do not know the history of the moniker, but after looking at older maps, it was plain to see the name had been changed from a racist slur to the current name. I would suggest to the topographic map makers that they may want to make amends for this oversight and correct this wrong. According to a post on the ADK Forums, the name may have referred to a dark bellied strain of brook trout once found in the lake.

The next morning, we bushwhacked to Alder Creek. There are trails shown on topographical maps of the area, but most remnants of these unmaintained trails are long gone and overgrown by the forest. We followed the marshy creek along the forest line. Eventually, we made it to our first tease of open water at the historic “Partlow Mill Dam.”

This body of water was once known as “Sylvan Lake.” It later became know as the Partlow Mill Dam after a 5 mile stretch of railroad connected the small lake to the main branch of the New York Central railroad. This junction was known as Partlow. This was during the heyday of the logging industry and represented the era when most of the old growth timber disappeared. The Partlow Lake Railroad ran from 1900-1905.

There are several branches of the Oswegatchie River. All begin in the Five Ponds Wilderness Area. The branches converge and the river flows generally north to the St. Lawrence River.

This site of convergence was a major trading post. Iroquois, mostly Onondagans, converted to Catholicism and were considered the “Oswegatchies,” and were known as one of the seven Iroquois tribes. The name Oswegatchie refers to “land of black water” in their native tongue. Likely referring to the tannin colored water of the river. Once over the mill dam, we entered the headwaters of the east branch of the Oswegatchie River. It was a very pretty, clear small stream. We dragged and lifted the rafts over seemingly endless deadfall. Deer flies were more than abundant!

The last day was a leisure paddle through several miles of slow moving current and switchbacks through mature forests and beaver plains. Over the course of this adventure, we lifted or pushed our rafts over hundreds of beaver dams. Remarkably, without any damage to the boats. These are tough boats!

The only people we saw over these four days were at the very beginning near Stillwater and again the end of our trip as we approached the public access area. Truly a remote experience close to home. I was able to send a satellite text via my inReach and our shuttle (remember my very understanding wife?) was right on time.

Nice article but let's try and keep this area quiet so it remains a remote experience.