The groundbreaking for The Last Station is scheduled for this site on June 12. Courtesy Gerry Kostyk

Among raffle items to support The Last Station are a basket of cheer and a quilt made by Beth Nutting. A one-night stay at the bed & breakfast Jacob Brewster House is also available. / Photo courtesy of Gerry Kostyk 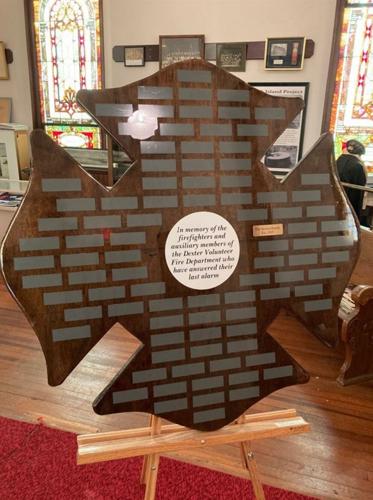 Engraved memorial plates are being sold for this Maltese cross to benefit The Last Station project in Dexter.Photo courtesy Gerry Kostyk

The groundbreaking for The Last Station is scheduled for this site on June 12. Courtesy Gerry Kostyk

Among raffle items to support The Last Station are a basket of cheer and a quilt made by Beth Nutting. A one-night stay at the bed & breakfast Jacob Brewster House is also available. / Photo courtesy of Gerry Kostyk

Engraved memorial plates are being sold for this Maltese cross to benefit The Last Station project in Dexter.Photo courtesy Gerry Kostyk

DEXTER — The Last Station project will celebrate its groundbreaking on June 12 with a fundraising goal tantalizingly close at hand.

The Last Station committee had hoped to reach $60,000 by the time of the groundbreaking.

“The upcoming groundbreaking ceremony will make it happen and maybe put us closer to $70,000,” said Gerald A. Kostyk, chairman of the Last Station committee and member of the Dexter Volunteer Fire Dept. Inc.

Mr. Kostyk is encouraged by funds coming in from project-related raffles. Names of winners of the three raffles will be drawn at the June 12 groundbreaking ceremony. Raffle tickets are $5 each and three for $10. Purchasers do not need to be present to win.

Second: One night stay at the Jacob Brewster House bed and breakfast in Sackets Harbor.

Third: Basket of cheer donated by the Wine Sellar.

Another fundraising activity is the sales of engraved memorial plates to honor deceased firefighters and auxiliary members. The plates will be placed on a Maltese cross that will be displayed in the new building. The cost of plates are $50 for one name and $75 for two names.

The Dexter Historical Society and the Dexter Volunteer Fire Dept. Inc. joined forces two years ago for The Last Station — a building in Dexter that will house two treasured historical pieces of equipment from the Dexter Fire Department along with various other memorabilia relating to the village’s heritage of firefighters and firefighting. Organizers hope to raise a total of at least $100,000 for the project.

The Dexter Fire Department was established in 1886. The original Dexter Fire Department was disbanded on Jan. 1, 2012, when the Brownville Joint Fire District, consisting of the Brownville, Dexter and Pillar Point fire companies, was established. The Dexter Volunteer Fire Dept. Inc. then became a nonprofit organization that conducts fundraising activities to supplement firefighters with items the fire district can’t budget for along with donating to other community causes.

The department, which is separate from the fire district, also contributes to the local food pantry, school backpack program and other community activities.

The Last Station will be constructed next to the Dexter Area Historical Society on the corner of Brown and East Kirby streets. A configuration will connect the two buildings. The society’s home is the former First Universalist Church, constructed in 1841. The building was donated to the group in 1997 by remaining members of the church, but it was officially opened by the historical society in 2005. The Last Station will be an accessory building to the church/historical society building. The two main items to be housed in the building will be the Dexter Fire Department’s 1929 Brockway fire pumper and its 1865 Rumsey hand pumper.

The Last Station will also include information/memorabilia on the history of the Dexter and Brownville EMS service.

Shovels will be at the ready on June 12, but recent economic developments have dug their own issues.

The ground broken on June 12 will be to relocate a storm drainage line, related to the project.

“The existing line goes underneath where the new building is going to go,” Mr. Kostyk said.

The dirt from that project will be used to cover ground over a pipe to be installed in a ditch between the Dexter Presbyterian Church and the Dexter Grange/Masonic Lodge.