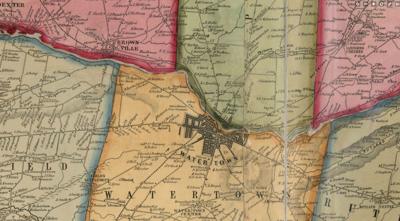 Except for the occasional snarls during the Jefferson County fair or tie-ups when people enter and exit Jefferson Community College, traffic issues on the Coffeen Street hill area are rather tame. But in 1894, a mysterious man was responsible for terrorizing people traveling the area.

On Aug. 20, 1894, the Watertown Daily Times reported there was a “maniac” on the loose around the hill on Coffeen Street. He ran around naked, with “limbs white as marble,” and threw stones. He “is always evidencing his lunacy by queer actions,” the paper reported.

The man was first reported by Del Smith, “the well-known hackman” and Will Graham, who were returning from a fishing expedition. They thought they saw a naked body of a man. They stopped at “the Butterfield residence,” changed horses and returned to where they saw the “body.” It was there that they met another horse and buggy driving up the hill. Its driver, J. F. Kimball, reported the box of his wagon was damaged by a large, thrown stone just a while back. Mr. Kimball thought “a spring must have broken” when he heard the crash.

Later, from the home of “Mr. and Mrs. Rice,” putting the two incidents together, a search party for the man was organized.

“They found in the thick dust of the road the prints of a man’s naked feet, going both ways, the last track covering that of Mr. Kimball’s wheels, showing that the stone thrower had gone down the hill after the attack,” The Times reported.

During the search, Mr. Butterfield’s dog began to bark furiously in a pasture near barns.

“Next there was a howl and the dog came limping in, evidently terrified, and, finding a place of shelter, could not be persuaded to come out.”

The search was given up and the police were later informed. It was thought the incident “would remain a mystery” and “that would be all that would be heard of it.”

But another attack was reported the next day, with another wagon box damaged by heavy stones. Shortly after, as the driver and passenger witnessed “a male figure in white dash over the fence into the field and disappear,” another carriage came up and reported a similar attack. That stone injured the driver and his young female passenger, “showing the maniac’s aim was improving.”

People began patrolling the area with guns. The Times assigned a reporter to the story, “writing his notes by the light of a cigarette, with a rock for a table and the cow pasture for his work room.”

The reporter was on the scene when the mysterious man and suspect came face-to-face with a Mr. Miller. “The madman grabbed him in a maniacal clutch and buried his knee on Miller’s breast and clutched his throat in a panther-like grasp.”

“The fleet-footed culprit was soon lost in the bushes.”

The search continued, but with no luck.

“The residents of the locality infested by the lunatic are thoroughly excited and will soon start a systematic search. Children are not allowed to go out of sight of their mothers and a strict watch is kept for signs of the madman.”

“The description of the lunatic, in a way, tallies with that of John Quirk, who escaped from a swiftly running train by jumping through a window at Rices Station on April 16,” the Times reported.

The man, the paper said, was thought to sleep in a shanty and enjoyed wallowing on the ground.

A suspect was found. “The crowd immediately gave chase and soon caught up with him. Although he could not give a good account of himself, he was not the man wanted and was allowed to go.”

“Meanwhile, the mystery deepens and the lunatic is free to break buggies and perhaps commit more dangerous crimes,” the Times reported.

Not much more was reported on the situation. But the Times did later refer to a “fire alarm whistle” in the area that may have scared the person off, perhaps for good.