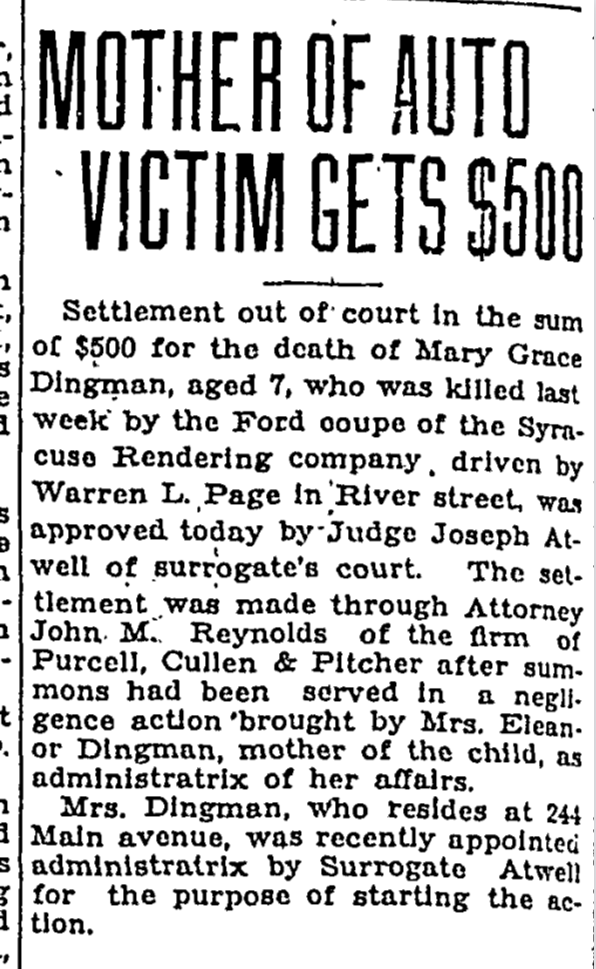 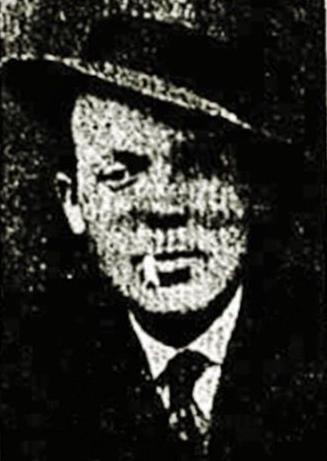 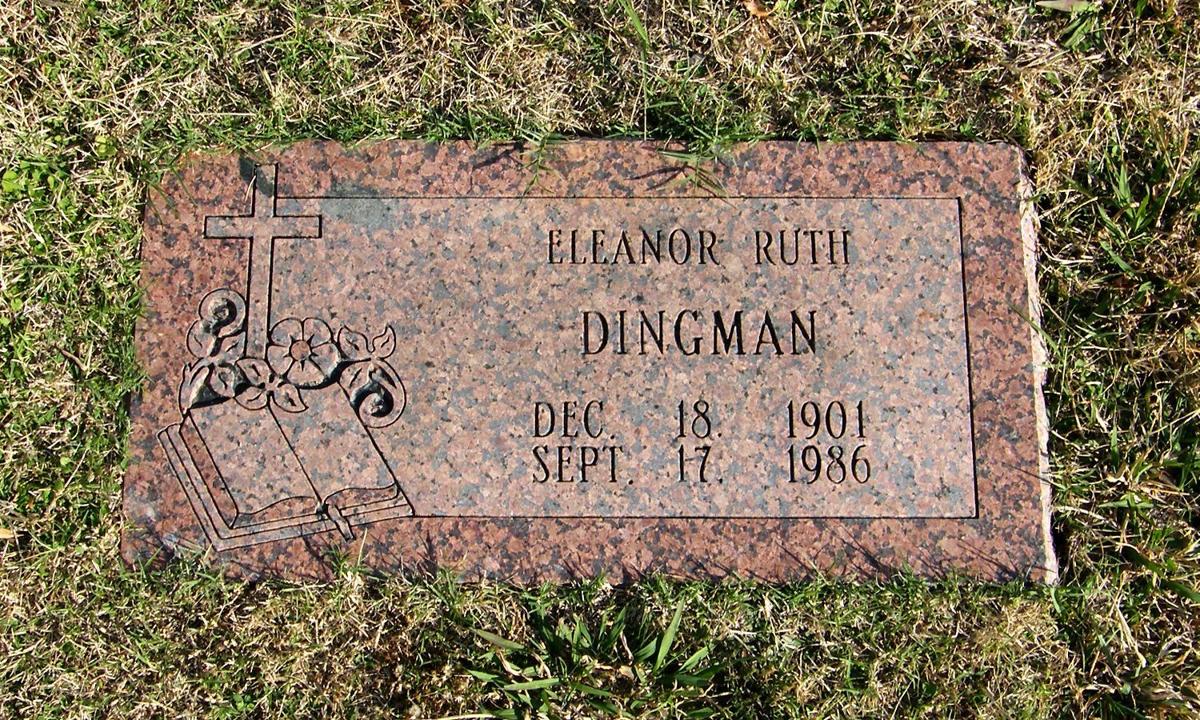 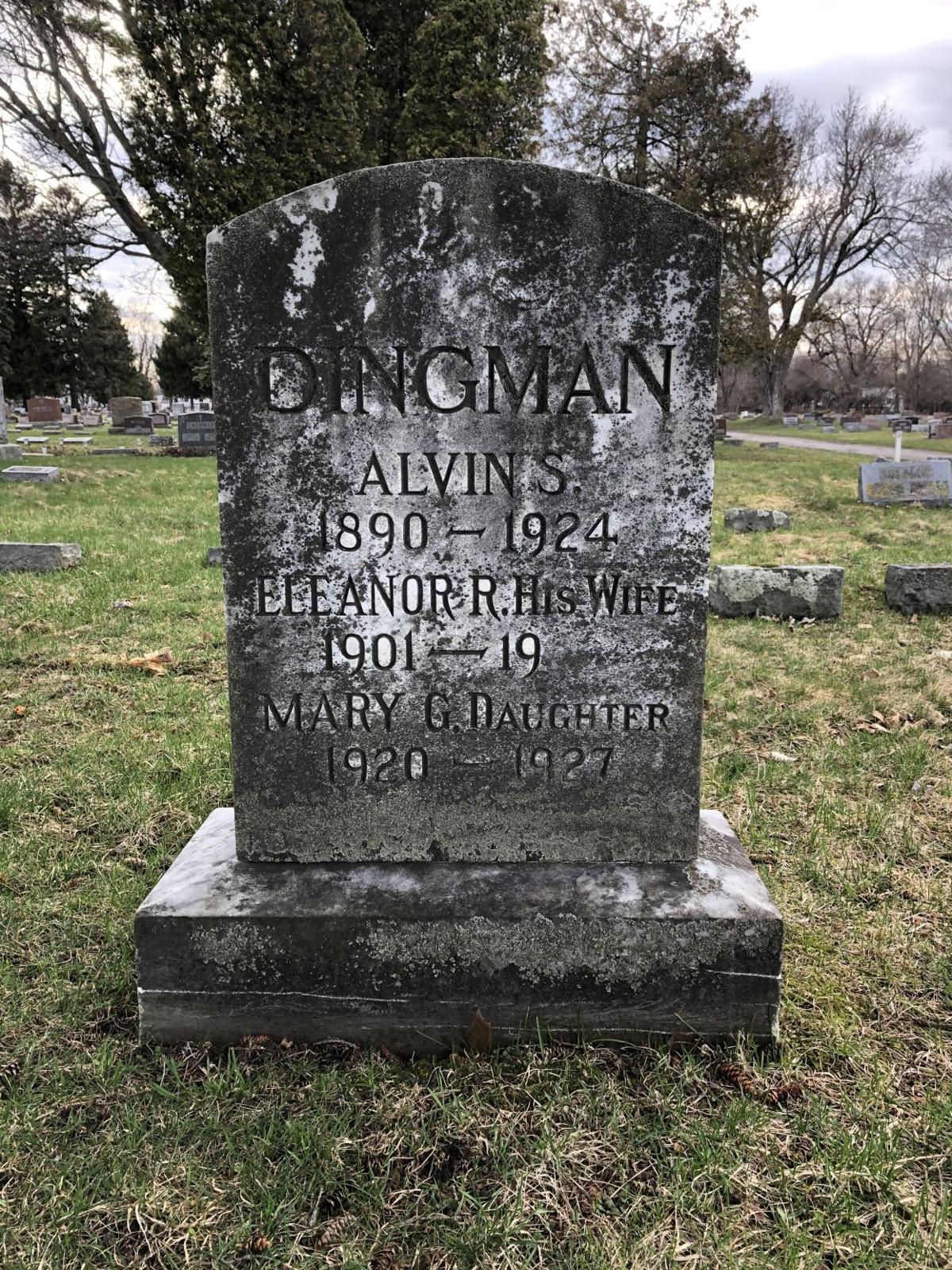 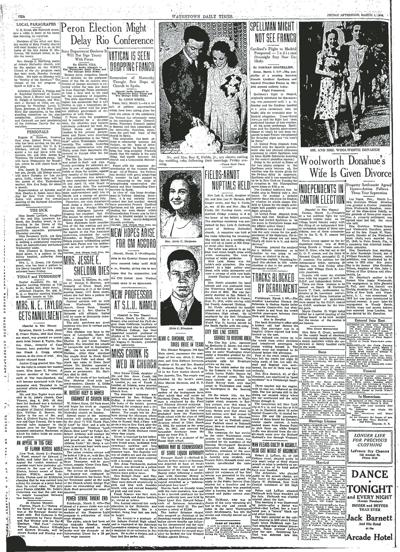 Watertown native Eleanor R. Dingman buried her husband Alvin S. Dingman when he was just 33 and she was 23. The had been married for six years when the first of two tragedies struck.

Today, a grave at North Watertown Cemetery from almost 100 years ago hints at this past: the story of early loss, how Mrs. Dingman survived and why her entry on the headstone still has no end date.

During a Sunday night in June 1924, during the middle of Prohibition, a fight began at the back of the bar room of Edward Bigler’s cafe in Amsterdam. It was a lengthy altercation between Alvin S. Dingman and Michael Carbone that grew louder and more heated before it finally became physical shortly after 9 when the men began to hit each other at close quarters.

Carbone fled the scene and ran to to his home where he told his wife what he had done. Distraught, he told her that he wanted kill himself. When the police arrived, he gave himself up without struggle.

According to the Amsterdam Evening Record the next day, Alivn S. Dingman came to Amsterdam from Watertown last September and his family came eight weeks ago. He was employed by the Chuctanunda Gas Light Co., working at the gas house. Carbone was known in Amsterdam as the proprietor of the barber shop in town and as the founder of Carbone’s Band.

The newspaper added: “The circumstances preceding the murder appeared this morning to be quite well established, although there was some conflict of statements as to who was the aggressor before the stabbing.”

After her husband’s death, Eleanor Dingman returned to her native Watertown, but tragedy followed her there three years later.

On Oct. 27, 1927, Eleanor Dingman and her 7-year-old daughter Mary Grace were walking along River Street about 50 feel from Mill Street.

According to the newspaper report, the street was congested due to the passing of a freight train over Mill Street when the girl ran out from behind parked cars.

She ran directly into the path a Ford coupe driven by Warren L. Page, manager of the Watertown Hide and Tallow company.

Warren Page was said to have applied the brakes, but his vehicle hit the girl and carried her a short distance before his car stopped.

While the girl did not have any broken bones, internal injuries seemed likely. She was taken to Mercy Hospital and cared for by Dr. Harlow G. Farmer, but she did not survive.

Eleanor Dingman settled out of court against the driver for the death of her child for the sum of $500.

Mother of auto victim gets $500

The newspaper mentioned her throughout the years at various points. For example, she taught Junior Church at Hope Presbyterian Church. She was an active member of the Delta Alpha class at Hope Presbyterian Church in 1938, She donated blood several times during October alone as noted in an article in 1950. She was also frequently listed by the newspaper as in attendance and events and gatherings in the community throughout the years.

Her life seemed full even after the death of her daughter and husband.

And Eleanor Dingman did have another child, a son named after his father. Alvin C. Dingman graduated from Watertown High School in 1940 and from the New York State Aviation School at Utica in March 1942. A few months later, in October, he enlisted in the military and was honorably discharged after 39 months of service with the Army Air Force.

In March 1946, Eleanor Dingman announced in the Watertown Daily Times the Feb. 13 marriage of her son and Texas native Kathryn Swenson in her San Antonio, Texas. The couple visited her in Watertown before moving to Hartford, Conn., where Alvin Dingman was employed by Pratt and Whitney Aircraft Company.

The Watertown Daily Times did not mention Eleanor R. Dingman’s death or activity in the city long after her son’s marriage.

However, on Sept. 17, 1986, at the age of 84, records on findagrave.com show Eleanor Ruth Hamilton Dingman died and was buried at Grand Prairie, Texas, in Dallas County. Seven years later, her son was buried nearby at the Dallas-Fort Worth National Cemetery.

Eleanor might have been a side character in a lot of other stories, but her life experiences speak someone who survived painful tragedy around her to live a long, full life. And she’s one of the few people who have their names on two headstones in two different parts of the country.