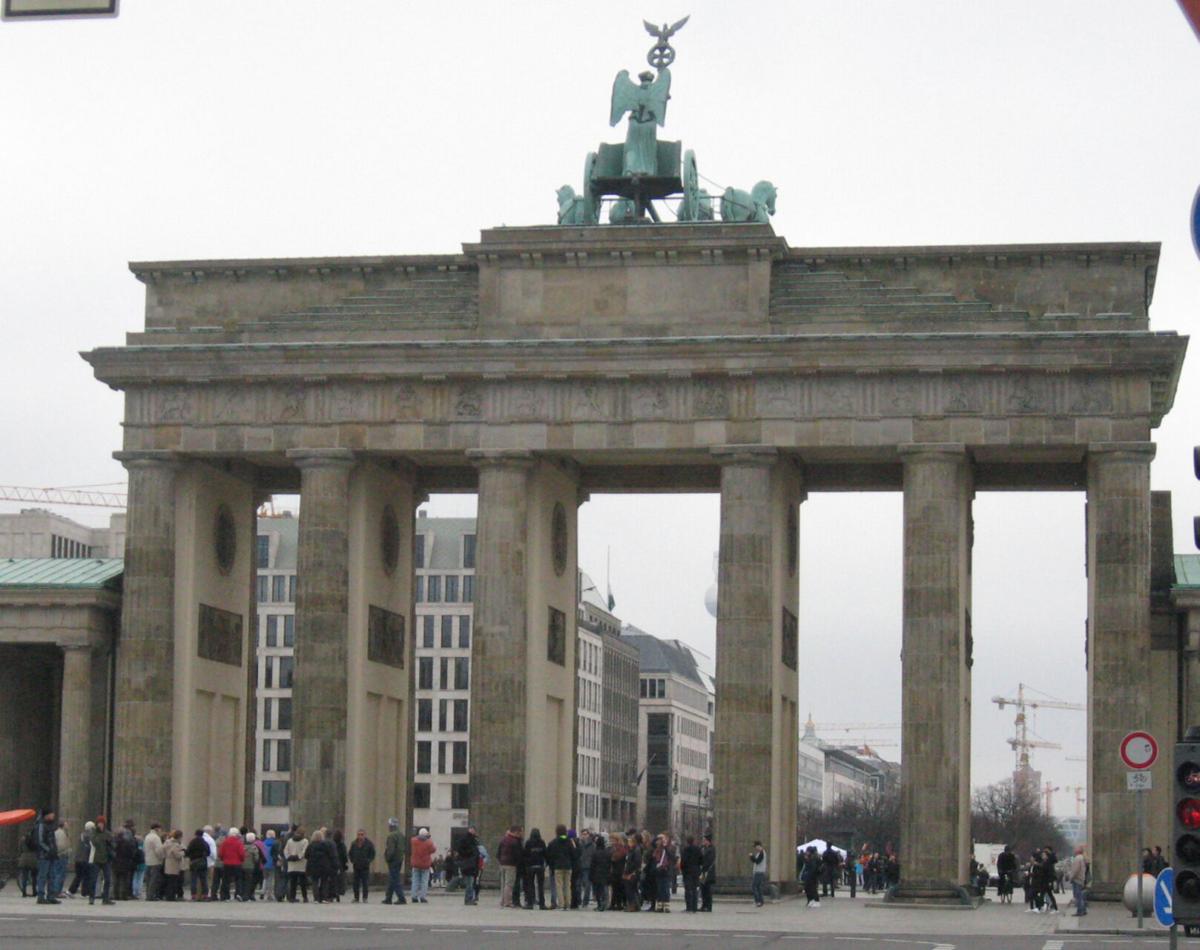 The Brandenburg Gate in Berlin once split East and West Germany. Bingham photo 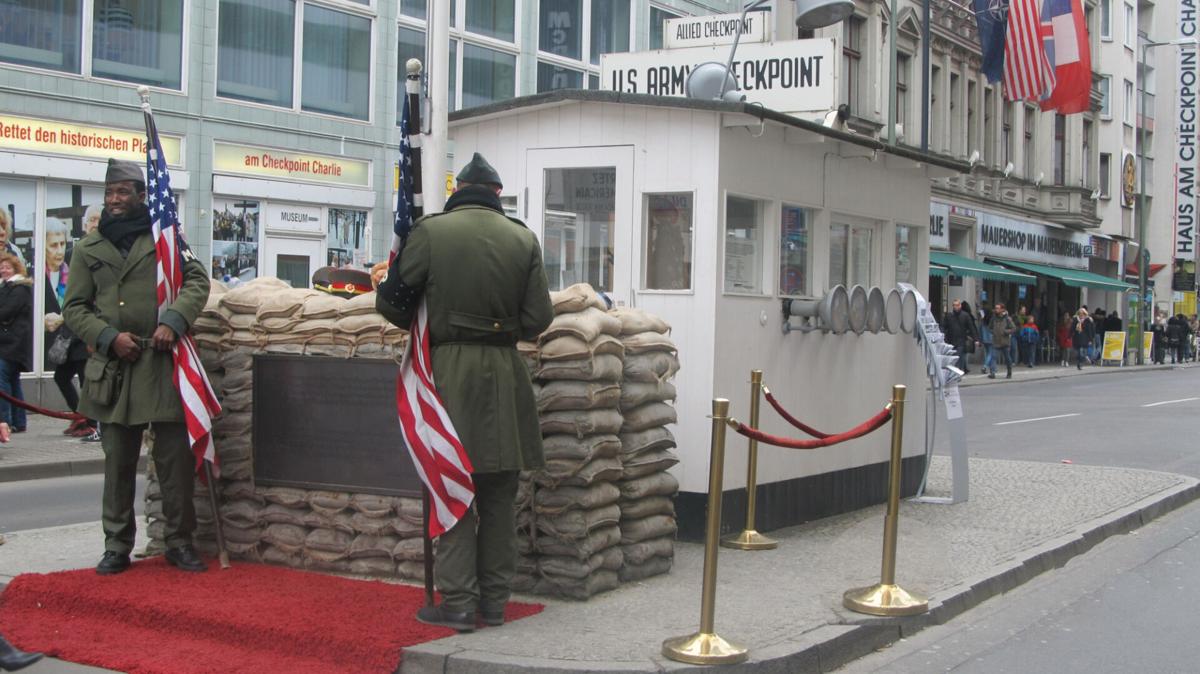 A replica of Check Point Charlie can be visited in Berlin. Bingham photo 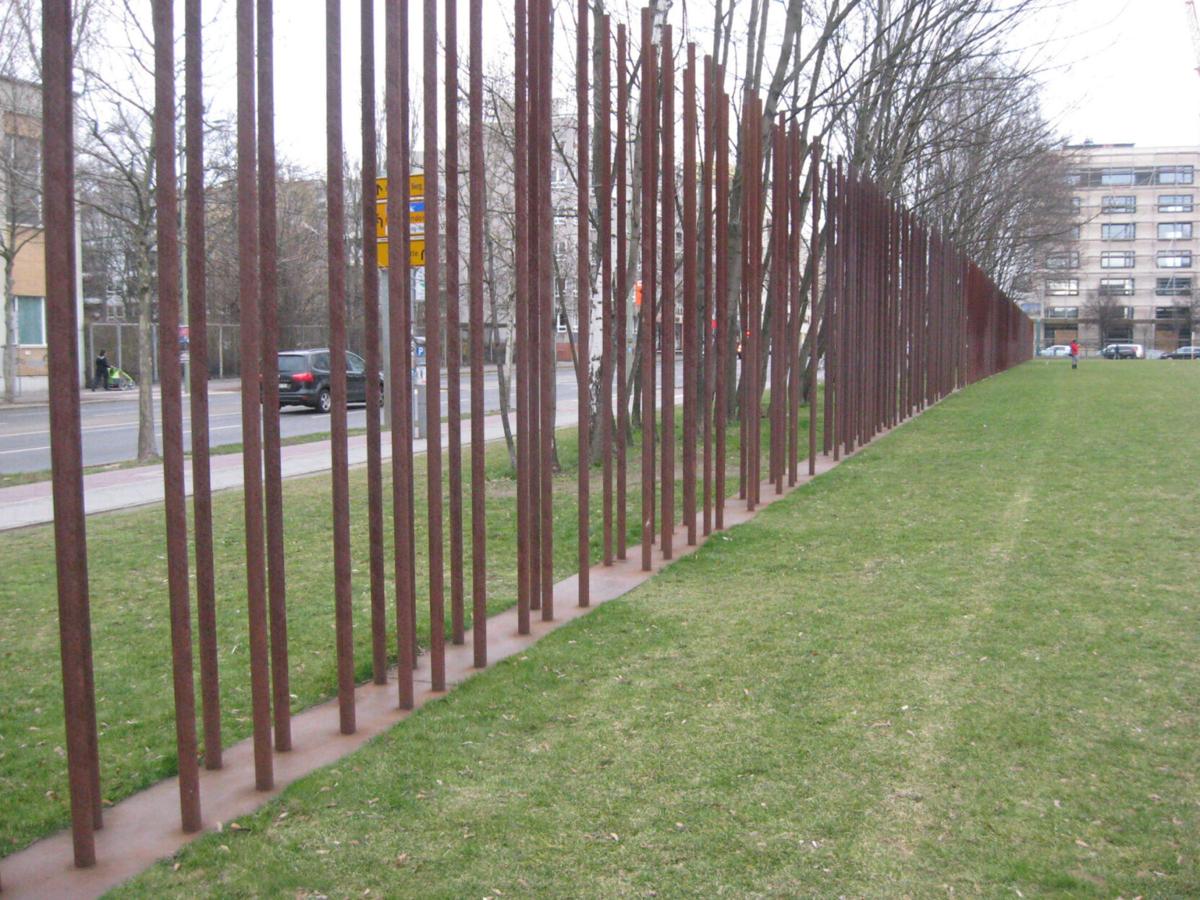 A scuplture outlines where the Berlin Wall once stood. Bingham photo 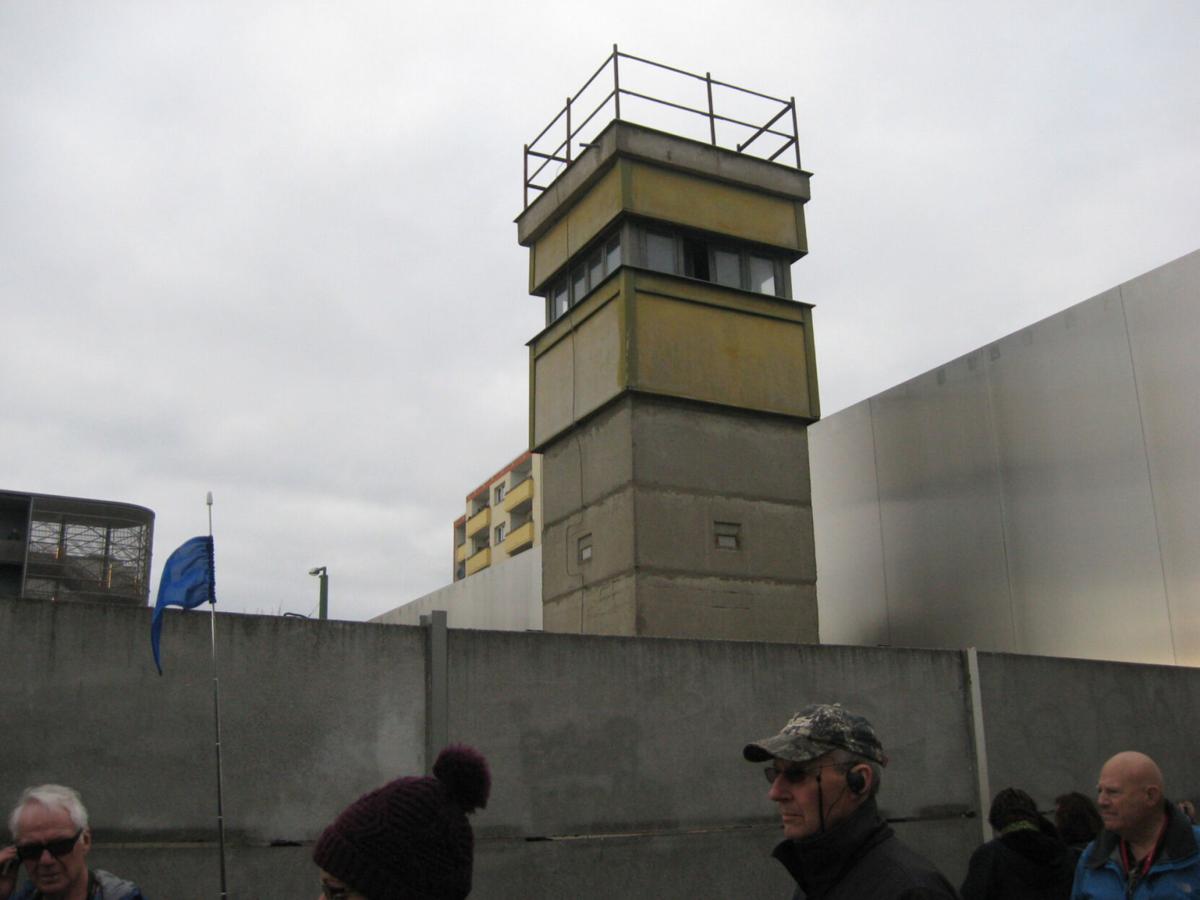 A portion of the Berlin Wall including this watch tower remains. Bingham photo 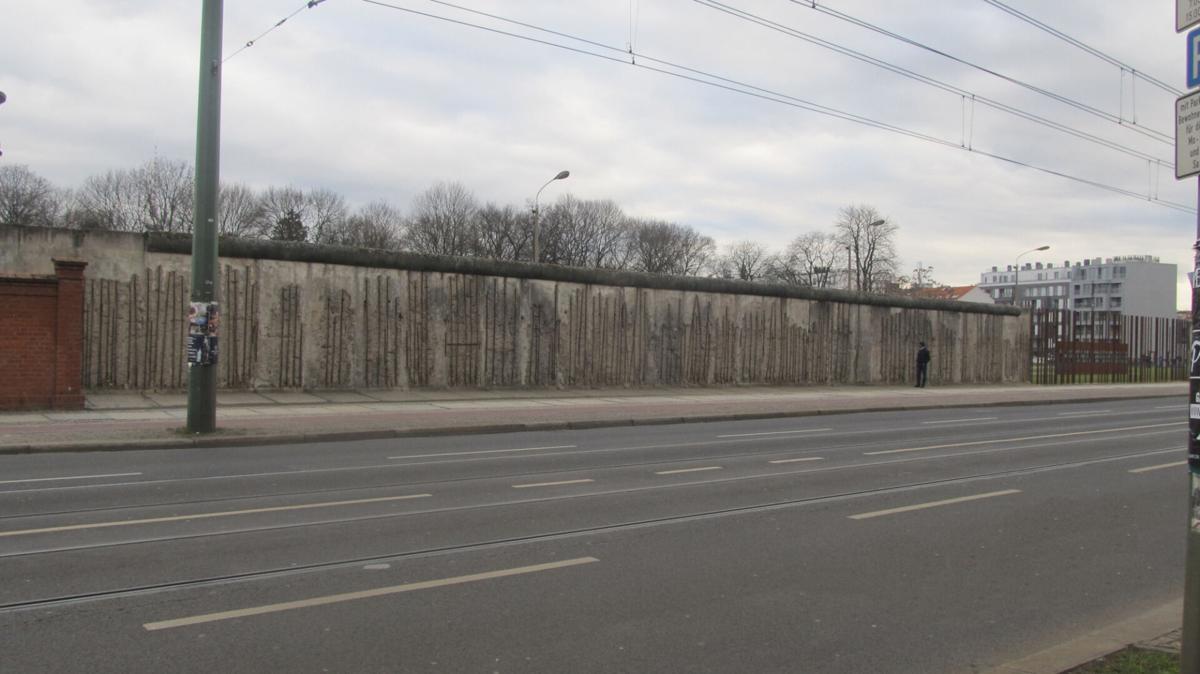 During their travels, Clara and Stan Bingham visited the Berlin Wall. Bingham photo

The Brandenburg Gate in Berlin once split East and West Germany. Bingham photo

A replica of Check Point Charlie can be visited in Berlin. Bingham photo

A scuplture outlines where the Berlin Wall once stood. Bingham photo

A portion of the Berlin Wall including this watch tower remains. Bingham photo

During their travels, Clara and Stan Bingham visited the Berlin Wall. Bingham photo

We saw a lot of World War II history on this trip: the Berlin Wall, escape tunnels, Check Point Charlie, the Communist control of people and events, Hitler’s Nazi regime and finally the Auschwitz Concentration Camp all of which we hope never happen in our country. Not a fan of high school history classes back in the ‘50s, this was an amazing trip seeing everything first hand.

Monday March 21 — East bound European trips typically depart during the evening and ours was no different. By 1 a.m. we were over Maine at cruising altitude, 37,000 feet, making a ground speed of 663 mph with a weakening coastal storm pushing us along. Dinner was served as we all settled down for the trip to London from JFK.

Tuesday, March 22 — All went well with our flight, landing early into London’s Heathrow Airport because of a tail wind, so we were put in a very large holding area in Terminal 5 waiting for our next flight’s gate to be posted.

Our Berlin arrival was on time and check-in through Immigration and Customs went without a hitch, so we were soon under the guidance of a GCT company representative.

Very quickly we observed that when stopped in traffic the engine of our SUV would stop which would again start when we were ready to proceed. We were told that this is a gas saving feature now included with the newer vehicles. The manufacturers of starters must be happy for this. There just is no free lunch.

To those of us remembering World War II, which was started in Europe when Hitler invaded Poland, being in such a significant city is exciting. With our rather early arrival, our tour guide took us for a walk around the vicinity of the hotel for an orientation walk, then we branched out on our own realizing there was something missing from the walls of the city — graffiti! Apparently it just isn’t a part of their culture. Perhaps it also isn’t in keeping with the neatness concept of the Germans.

Wednesday, March 23 — With a good night’s rest behind us we headed for the breakfast area. Not unusual, we found a buffet filled with all sorts of good things, some of which were even dietetically good for you! With plates loaded, we went to sit with some of our fellow travelers.

Our day’s program began with a bus tour of Berlin, with our first stop at the Brandenburg Gate, a site of many major historical events between Prussia, Russia, East and West Germany. After listening to a short talk and watching a native dressed fellow playing a hand cranked calliope complete with a monkey to collect donations, we got back on the bus.

A trip to Berlin would not be complete without visiting the famous Berlin Wall, a very sobering part of our trip. Before the building of the Wall and after the World War II defeat of Nazi Germany,

Russia’s paranoia grew and they decided to force the allies’ hand and instituted a closing of access to the east section. The Autobahn was closed for “indefinite repairs,” while rail and canal use was not allowed. Subway terminals were no longer used which meant that supplies for the city were not available. Thus began the Berlin Airlift on June 24, 1948 which was the first international crisis of the cold war.

American relief efforts to take food, coal and other essential supplies into the area used the Templehof Airport. It was said that every thirty seconds an airplane either landed or took off from this field. The Soviets began to realize that their efforts for control were not going to work and the blockade was ended May 12, 1949. However, flights bringing in supplies still continued for a period. An interesting human interest story came out of the airlift operations. On their way to landing, crew members began tying candy to small parachutes and dropping these to the children below. This soon became a large part of the operation. Templehof closed in 2008, but was opened in 2015 to become a refugee camp. Currently, the space available is used for conventions with the extended acreage a park used for picnics and other outdoor activities.

After the Berlin Airlift, the allied powers decided to divide Berlin into occupational zones to help rebuild. All went well, however Russia was becoming disgruntled at the thought of Germany becoming self-sufficient by unification and reconstruction, so they created a new Soviet-power grab regime. As people, mainly educated people, started fleeing the Soviet Zone because of hunger and poverty, the Soviets started restricting emigration and built the Soviet wall, the “Berlin Wall,” which was in place from 1961-1989.

Escape from the east to the west was thwarted by many means. A no-man’s land, called the “death strip”, was complete with appropriate manned guard towers and mines along the wall which took many lives. A series of iron spiked mats were laid below windows injuring those attempting to escape by dropping from window sills. These became known as Stalin grass or lawn. The Soviets bricked up windows near the line of demarcation as the desire to leave the eastern existence became very strong. Tunnels found were filled and anyone caught in them was immediately shot.

Surprisingly we found the wall was not just a part of the Berlin landscape, but a part of the Iron Curtain which continued for 4,300 miles through Poland, Czechoslovakia, Hungary and many other countries from 1945 to 1991. This boundary divided Europe into two separate areas so the Soviet Union could block their territories and states from having any contact with the West and other noncommunist areas. Between the Nazis and the Communists, the people’s lives were a mess!

With our guided tour finished, we set out immediately for Check Point Charlie a symbol of the Cold War, representing the separation of East and West. This was the single crossing point for foreigners and members of the Allied Forces/diplomats. Naturally pictures were taken of us standing in front of the guardhouse.

We have been to many countries, including Russia, which operated under the iron fist of communism. For those of us from the free world, this is difficult to realize or understand.

These people were kept poor, ignorant and uneducated, working for the good of the leaders and politicians. This allowed the heads of the state to skim copious amounts of currency from the coffers and to control whatever they wanted while promising better lives.

There are some jokes about communism, such as: What happens to a desert during communist rule? For a while nothing, then there is a shortage of sand.

On the lighter side we also viewed the Ampelmannchen, the “little traffic light man.” Found only in the Soviet sector, these little men were a part of the traffic light system and were superimposed over the lights, either green or red. This was used to assist the pedestrian traffic.

Editor’s note: Clara and Stanley Bingham of Carthage took a trip to Germany in 2015. The Journal & Republican has published a chronicle of their journey. This is the first of an eight part series.