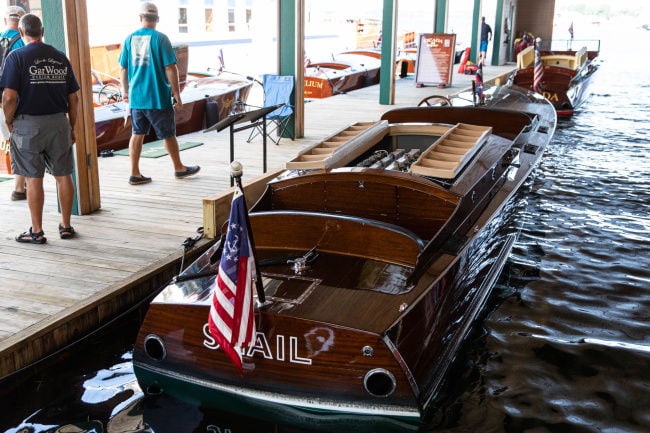 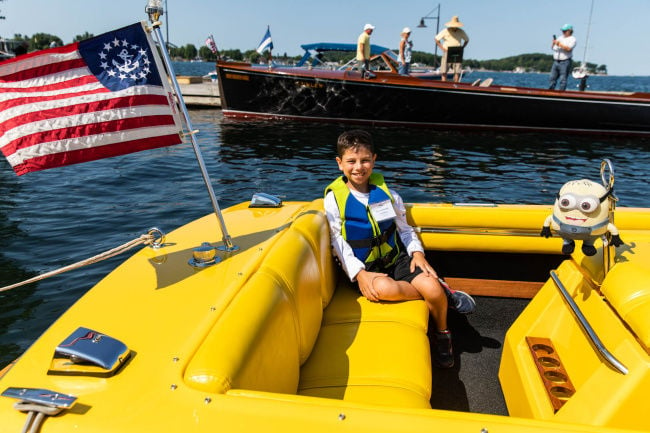 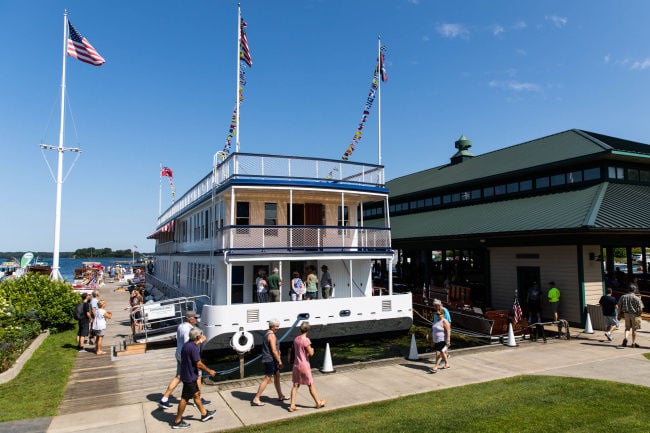 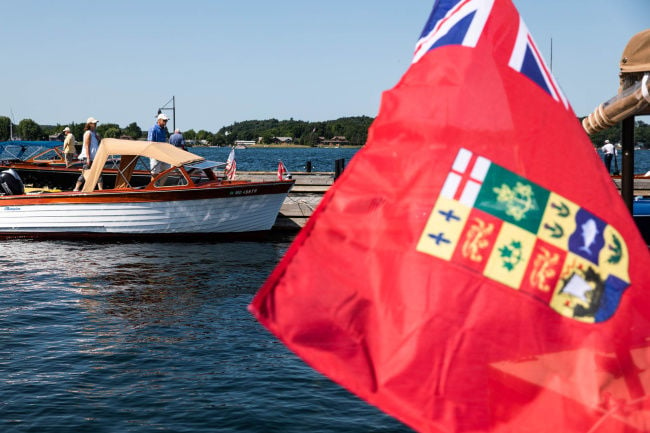 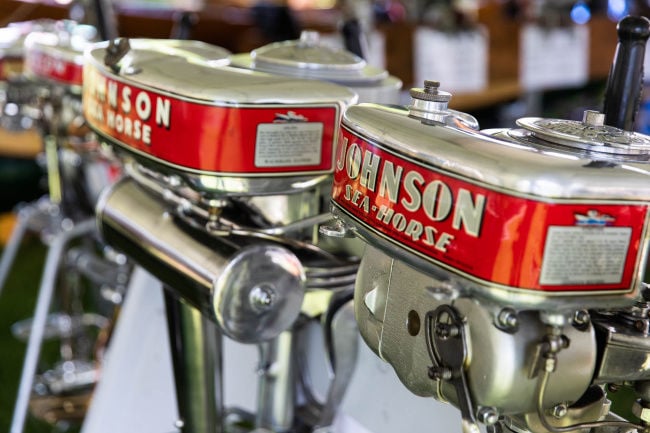 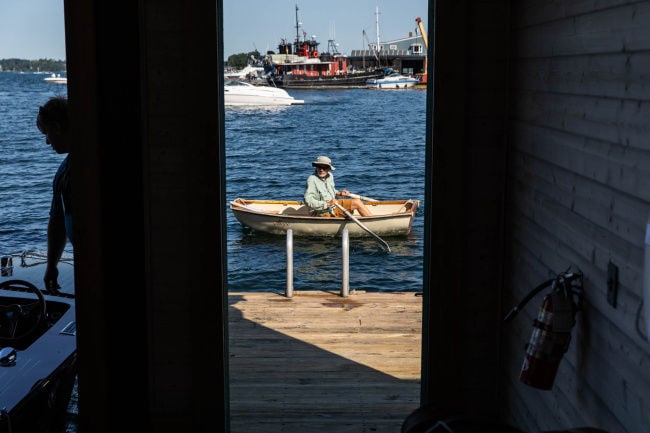 A man rows a row boat along the St. Lawrence River on Saturday during the 55th annual Antique Boat Show at the Antique Boat Museum in Clayton. Sydney Schaefer/Watertown Daily Times 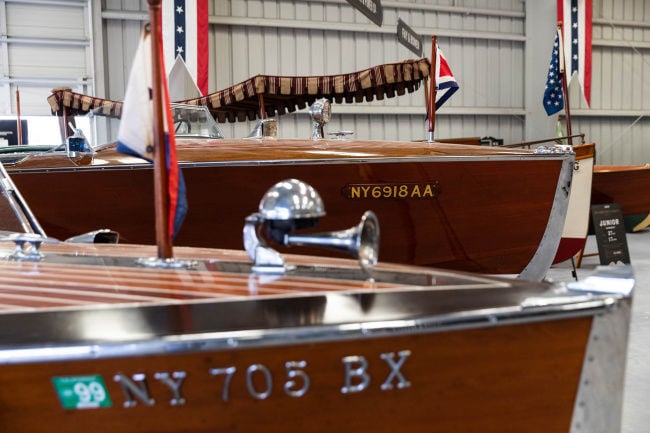 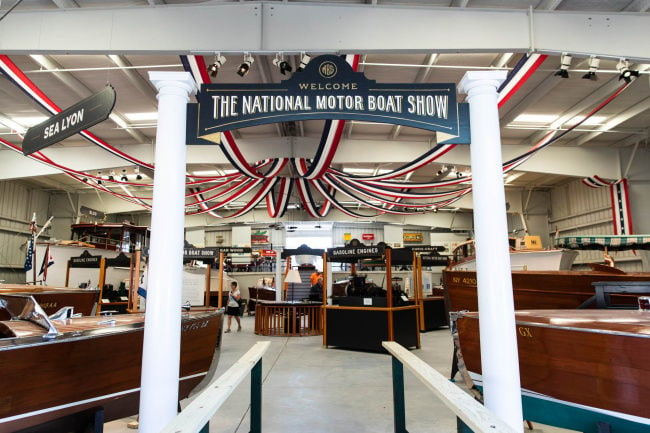 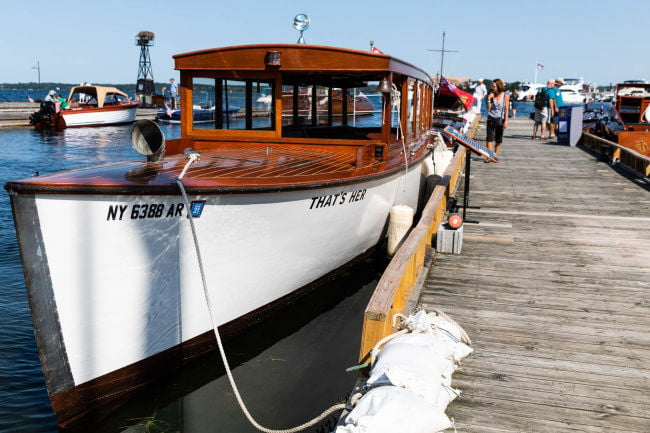 The 1933 ferry boat named “That’s Her” sits on display on Saturday during the 55th annual Antique Boat Show at the Antique Boat Museum in Clayton. Sydney Schaefer/Watertown Daily Times 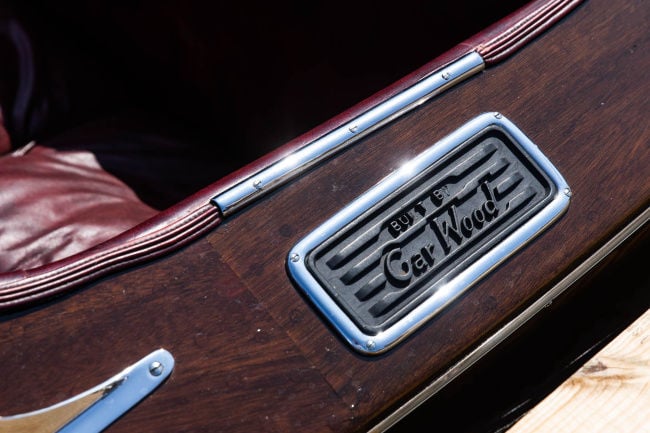 A Gar Wood sign glitters in the morning sun on Saturday during the 55th annual Antique Boat Show at the Antique Boat Museum in Clayton. Sydney Schaefer/Watertown Daily Times 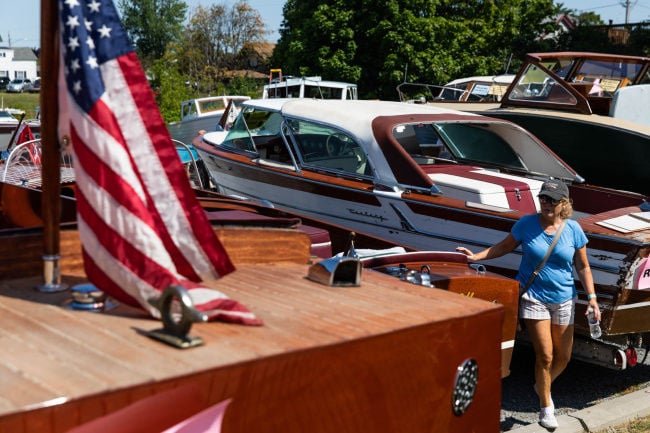 A woman walks through rows of boats on Saturday during the 55th annual Antique Boat Show at the Antique Boat Museum in Clayton. Sydney Schaefer/Watertown Daily Times 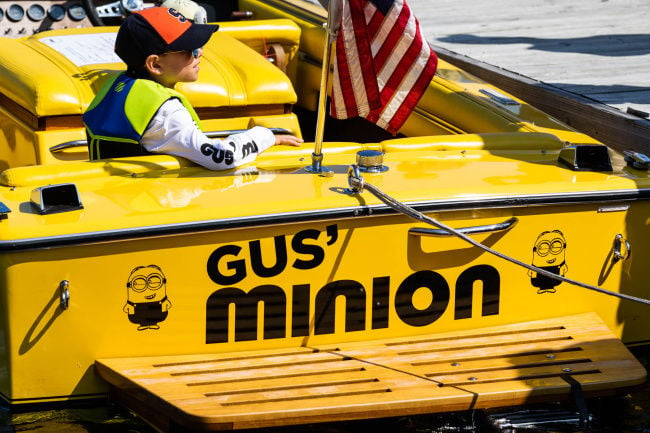 A man rows a row boat along the St. Lawrence River on Saturday during the 55th annual Antique Boat Show at the Antique Boat Museum in Clayton. Sydney Schaefer/Watertown Daily Times

A Gar Wood sign glitters in the morning sun on Saturday during the 55th annual Antique Boat Show at the Antique Boat Museum in Clayton. Sydney Schaefer/Watertown Daily Times

CLAYTON — Nine-year-old Gus Lombardi sat proud in his yellow 1976 Chris Craft Saturday, showcasing it alongside dozens of antique boats rocking in the slips at the Antique Boat Museum for its annual show.

His 17.5-foot long ski boat named Gus’ Minion, derived from the cartoon creature from the movies “Despicable Me” and “Minions,” glowed in the sun that shone over the museum campus and the Chris Crafts, Gar Woods, Lymans and other antique watercraft rocking in the museum slips. It’s bold yellow hull delighted the young boater from Syracuse because it stood out among the other boats at the show, he said, and its name helped garner interest from other children like him.

John Lombardi, his father, has taken Gus on boat rides across Skaneateles Lake, Oneida Lake, Lake Ontario and the St. Lawrence River since he was an infant, and bequeathed him the Chris Craft runabout that became Gus’ Minion a few years ago.

“This was one of the first fiberglass boats,” Gus said. “You can go skiing on it. There’s an added platform so you could go swimming on it.”

Gus has attended four Antique Boat Shows at the museum, and his father has ventured to several more over the years.

“It’s nice to get the younger generations involved,” Mr. Lombardi said. “A lot of young kids get distracted by too many other things.”

Mr. Lombardi showcased a dark blue, 1969 Chris Craft. Growing up, Mr. Lombardi said Chris Crafts were “the coolest” boats, and he jumped on the opportunity to purchase one in 2001. It went through practically a complete restoration, he said.

The Syracuse boater said he enjoyed conversing with fellow boaters about the passion they shared during the event, although Gus was attracted to another aspect of the show.

“I just like the experience of looking at all of the different boats,” he said.

Participants from across the U.S. and Canada displayed a combined 87 boats and engines, outboard and inboard, at the show. The museum also brought out models it doesn’t frequently display, including the two 1900s Baby Gars Snail and Cicada, returned to the museum just in time for the show.

Hundreds of visitors attended the 55th annual Antique Boat Show and perused the boats on display, asking their owners detailed questions about them.

Caitlin Playle, events and communications coordinator for the museum, said preliminary numbers for Friday indicated that visitation to the event was up last year, and the overall event could draw more visitors than the previous year. The event drew a large crowd despite the museum, village and other shoreline communities across the river dealing with unprecedented, high water levels inundating shores and submerging docks. While the water levels may have deterred some boaters from attending, Ms. Playle said the museum had adapted by leaving in risers from earlier in the year.

Howard and Leslie Kirkby drove their 1940 Cruisabout named White Cap across the St. Lawrence River from their home in Iroquois, Ontario, to display it at the show. The 33-foot-long wooden boat, built by the now defunct Richardson Boat Company, was adorned with an array of colorful flags, features a 70-horsepower Westerbeke engine and has a cabin with a small dining table, couch seating, crank-propelled windows and a sleeping area at the bottom of the stairs.

Mr. Kirkby said six owners have operated the boat, including him ever since he purchased it in 2014, and it has traveled more than 25,000 miles across the Great Lakes and its tributaries. It has been listed with the Antique Boat Museum’s permanent registry of historical boats.

“I fell in love with it since the first time I saw it,” he said.

The elevated water levels of the St. Lawrence River had challenged Mr. Kirkby on his voyages by dragging in more debree like tree branches, but he said it didn’t deter him from attending the show. While the no-wake rules slowed him and other boaters down, Mr. Lombardi said he experienced no issues overall from the waters, and appreciated the accommodation at the docks.

While some of the hundreds of people who attended the show looked at the display boats, others flocked to the Antique Boat Auction past the slips.

Antique Boat America, Clayton, featured 46 lots of antique boats and accessories up for grabs, most with no reserve prices. Peter Mellon, founder of the company, which is advertised as the world’s largest antique boat broker, said the show attracted about between 260 and 270 bidders from across the U.S. and Canada, and they were able to sell goods from 43 of the 46 lots Saturday.

“We’re very happy with the support every year by the community,” he said.“

The boat show concludes Sunday with the awards for several display boats and the grand parade along the river.