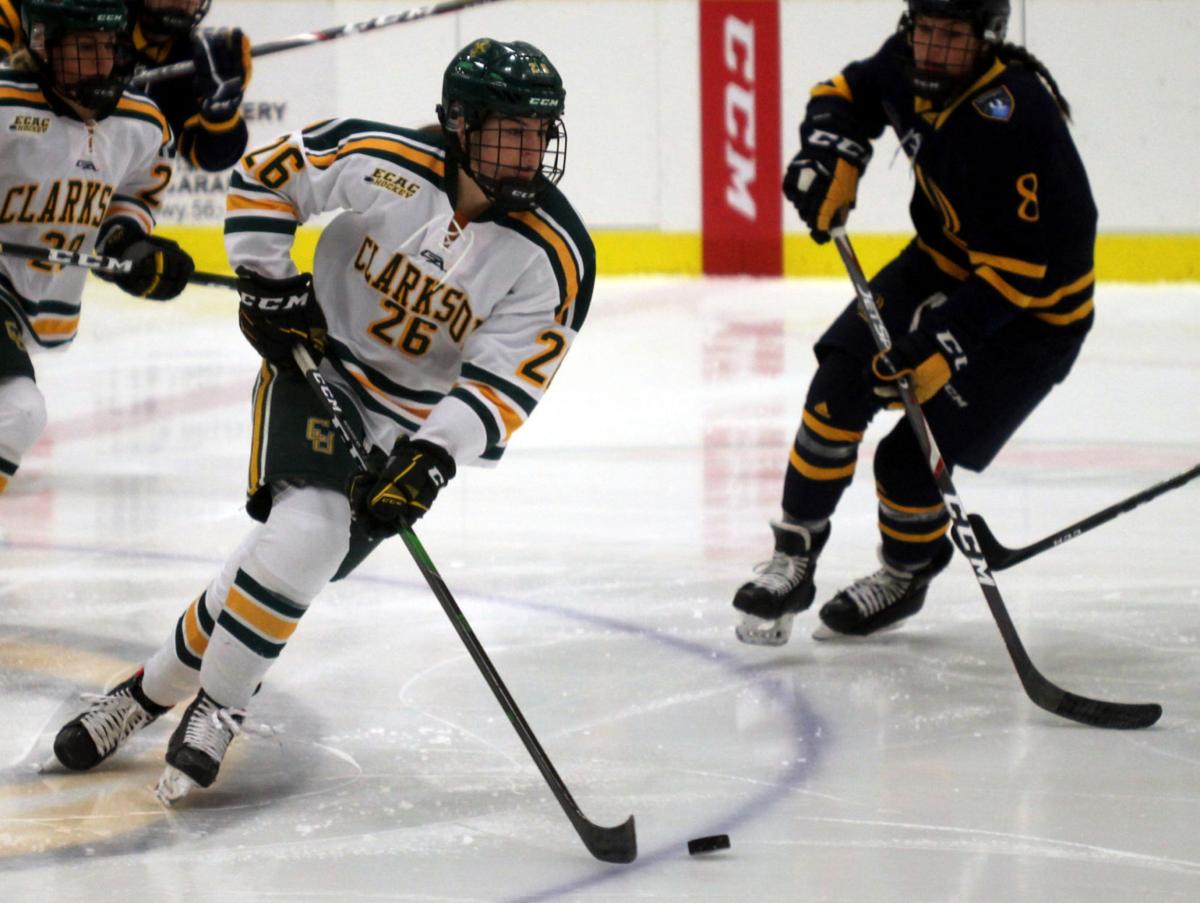 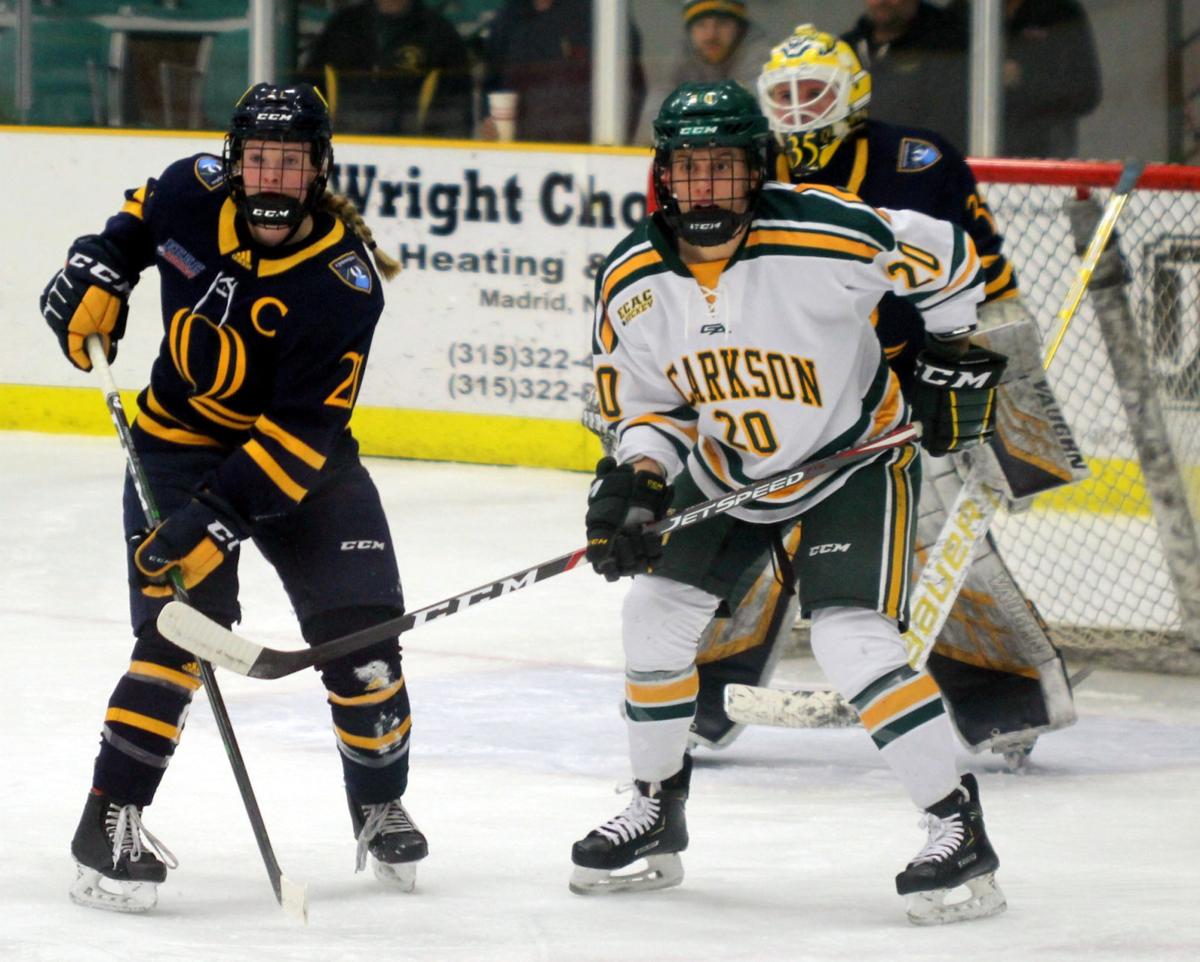 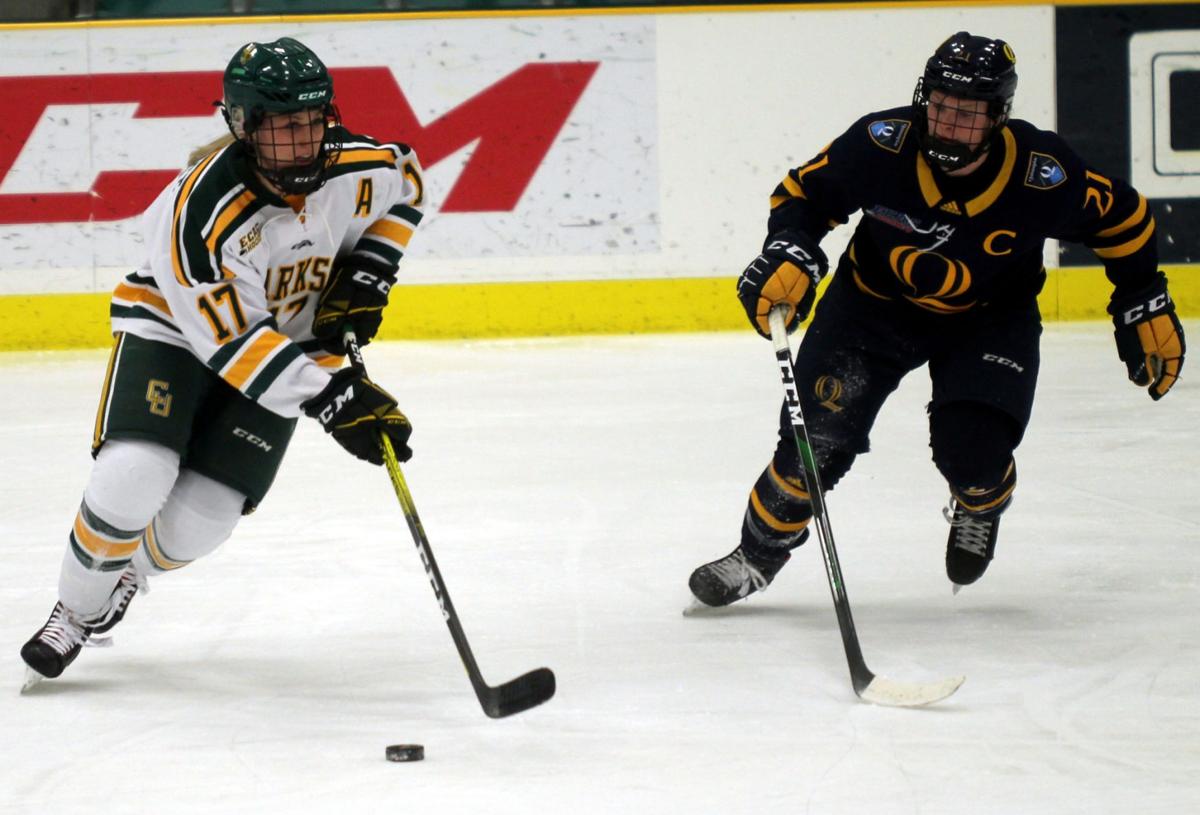 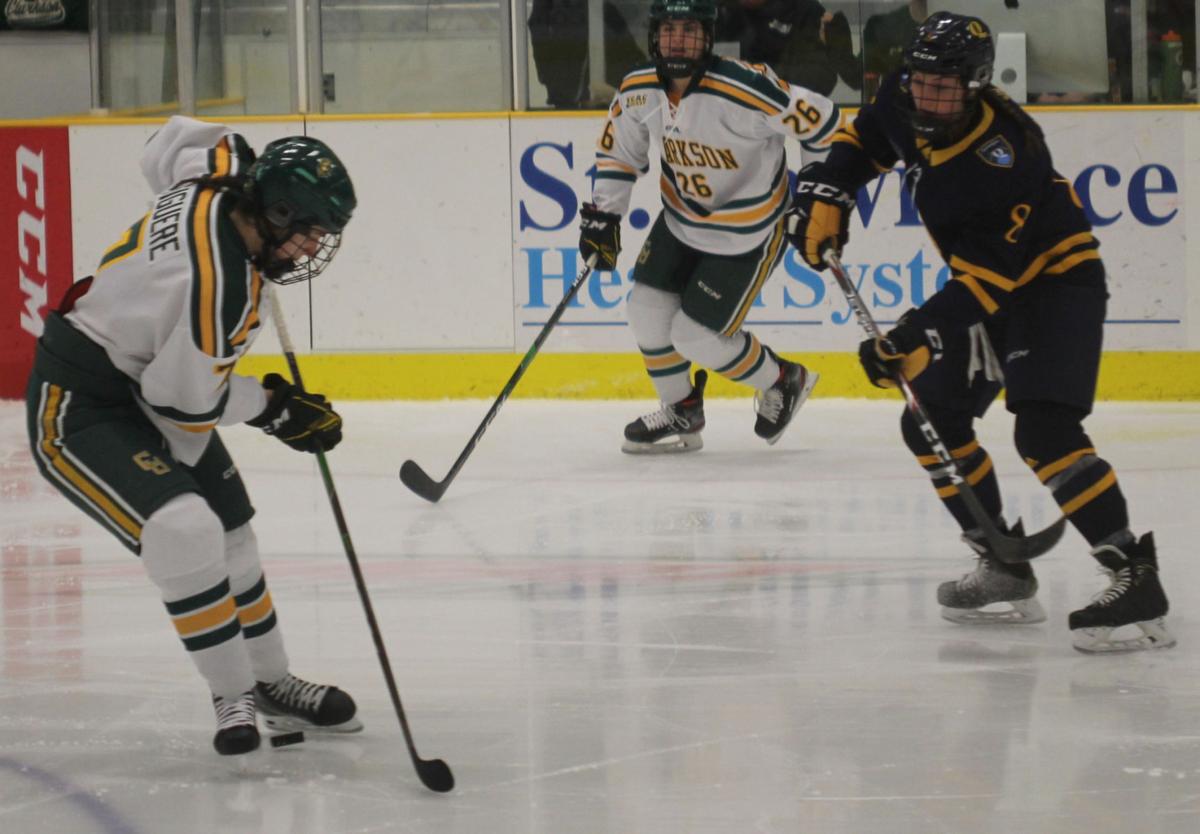 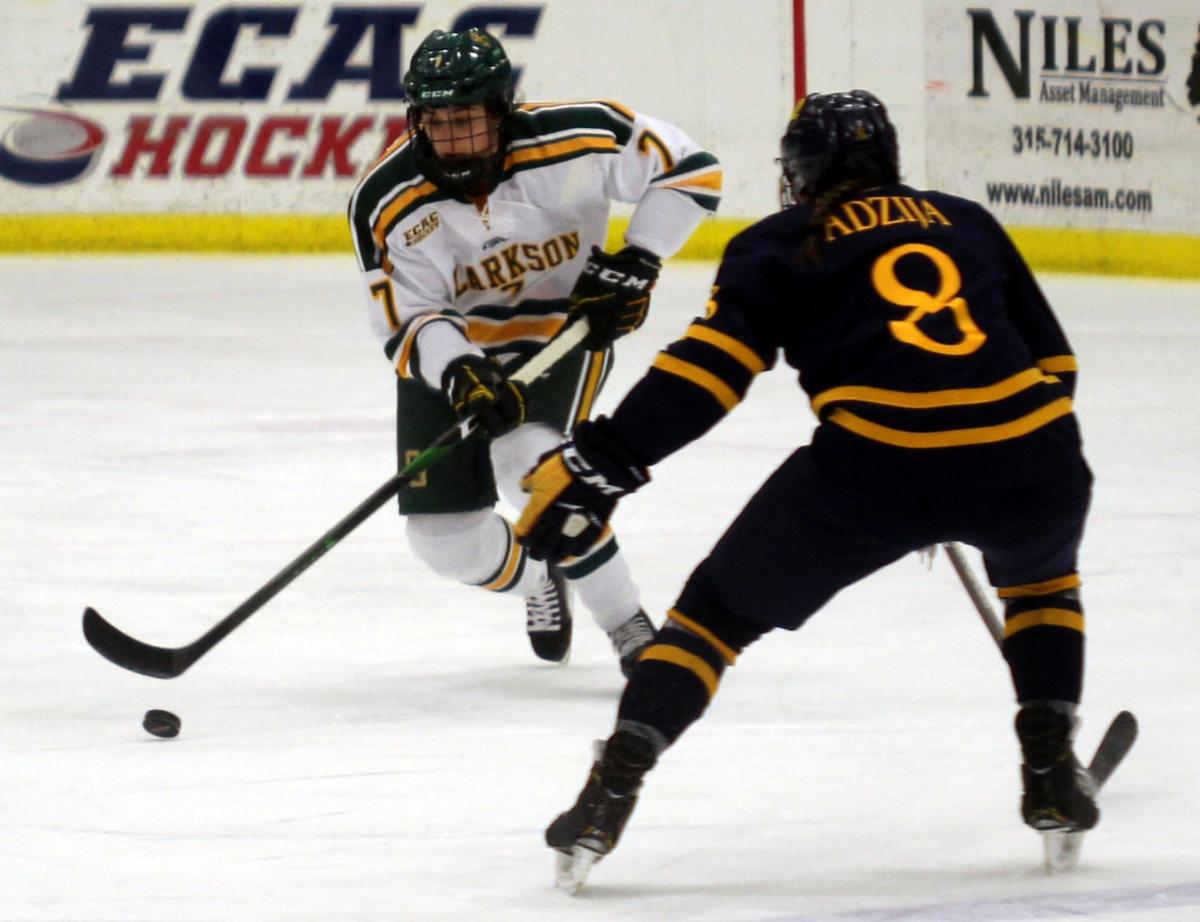 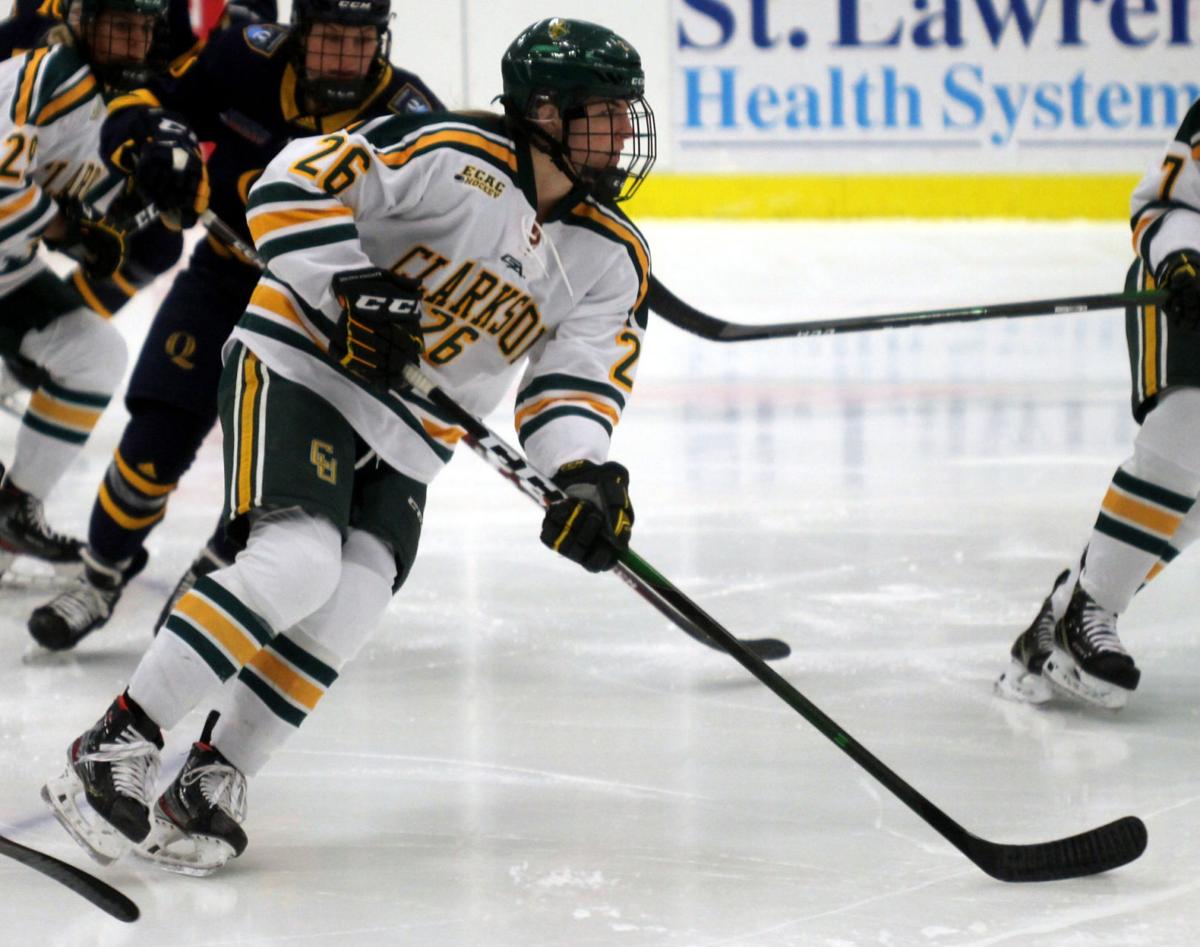 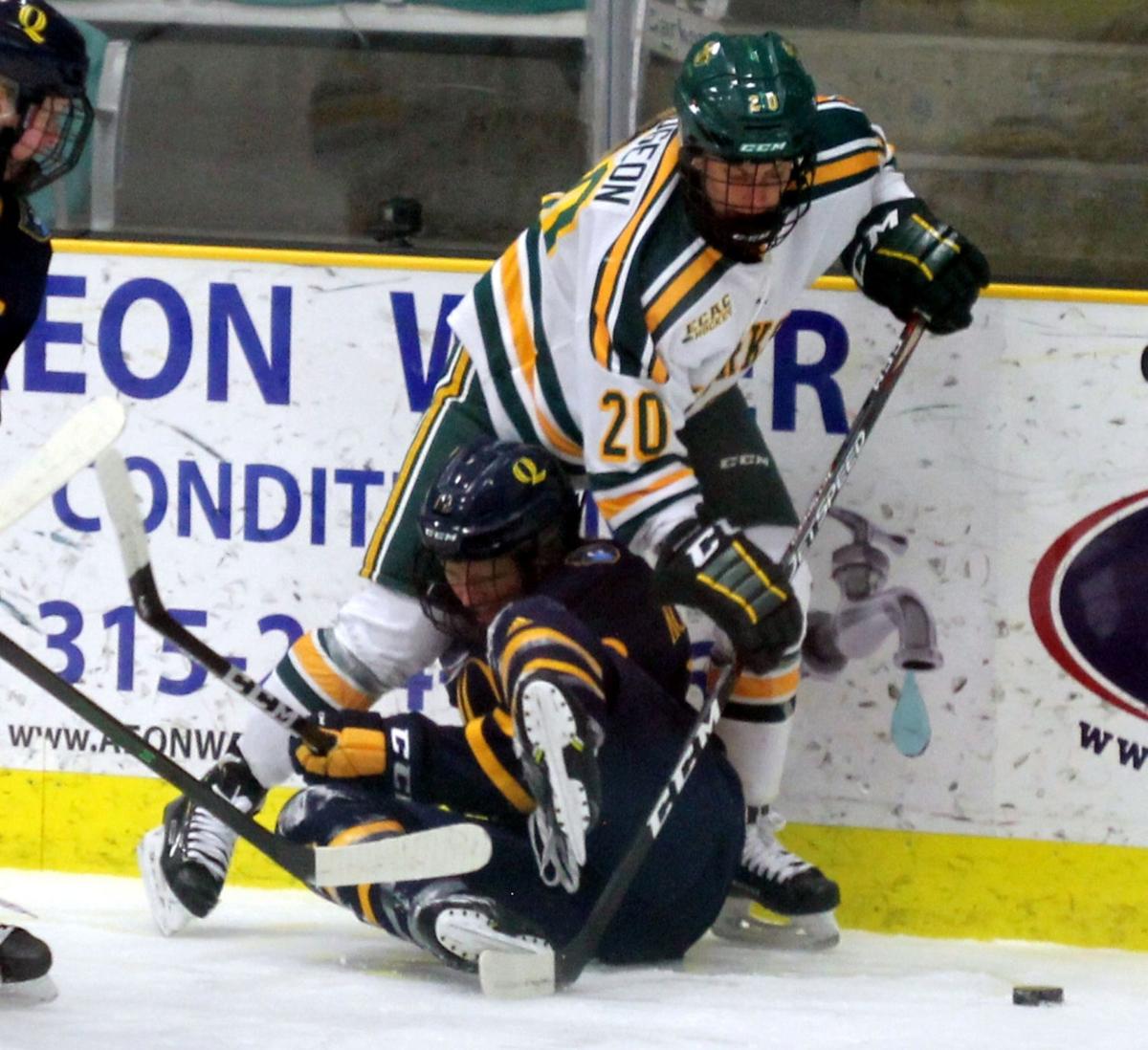 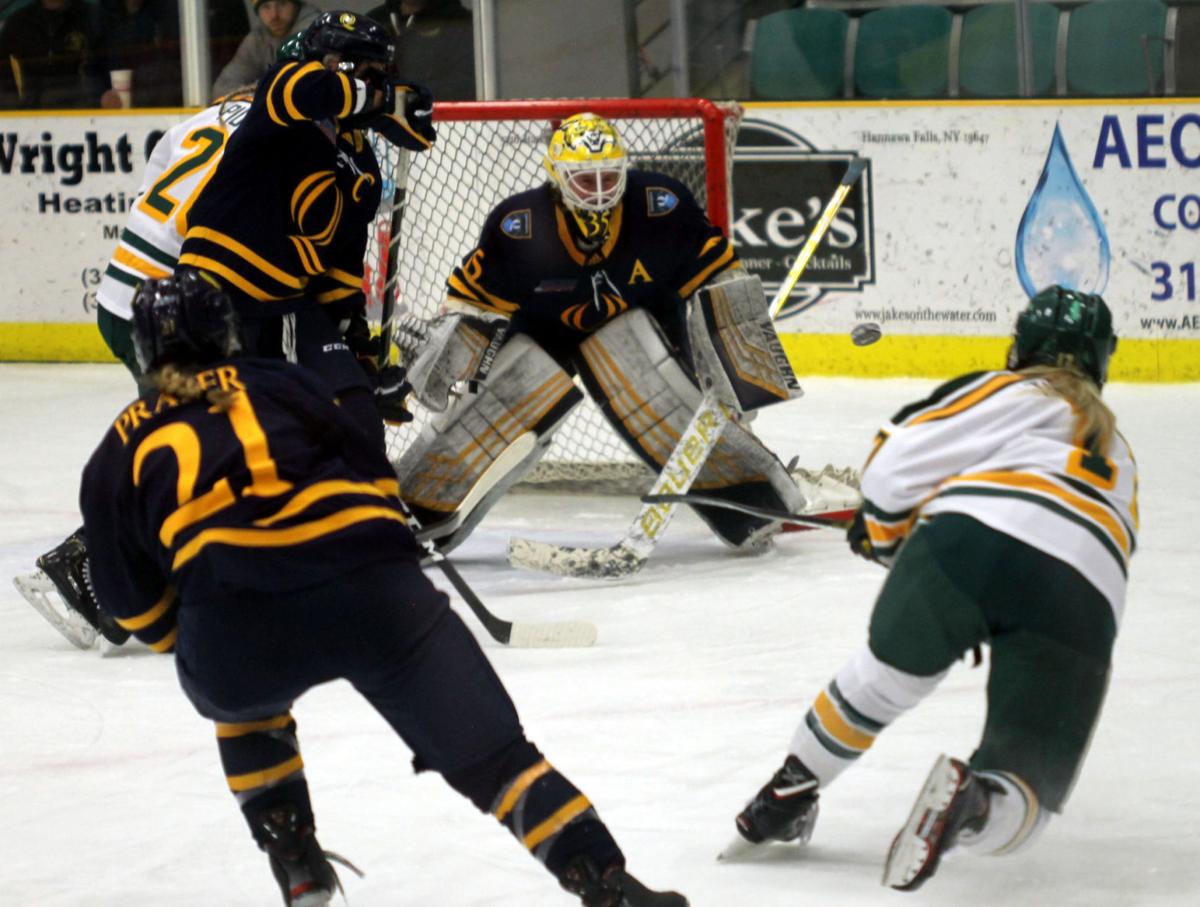 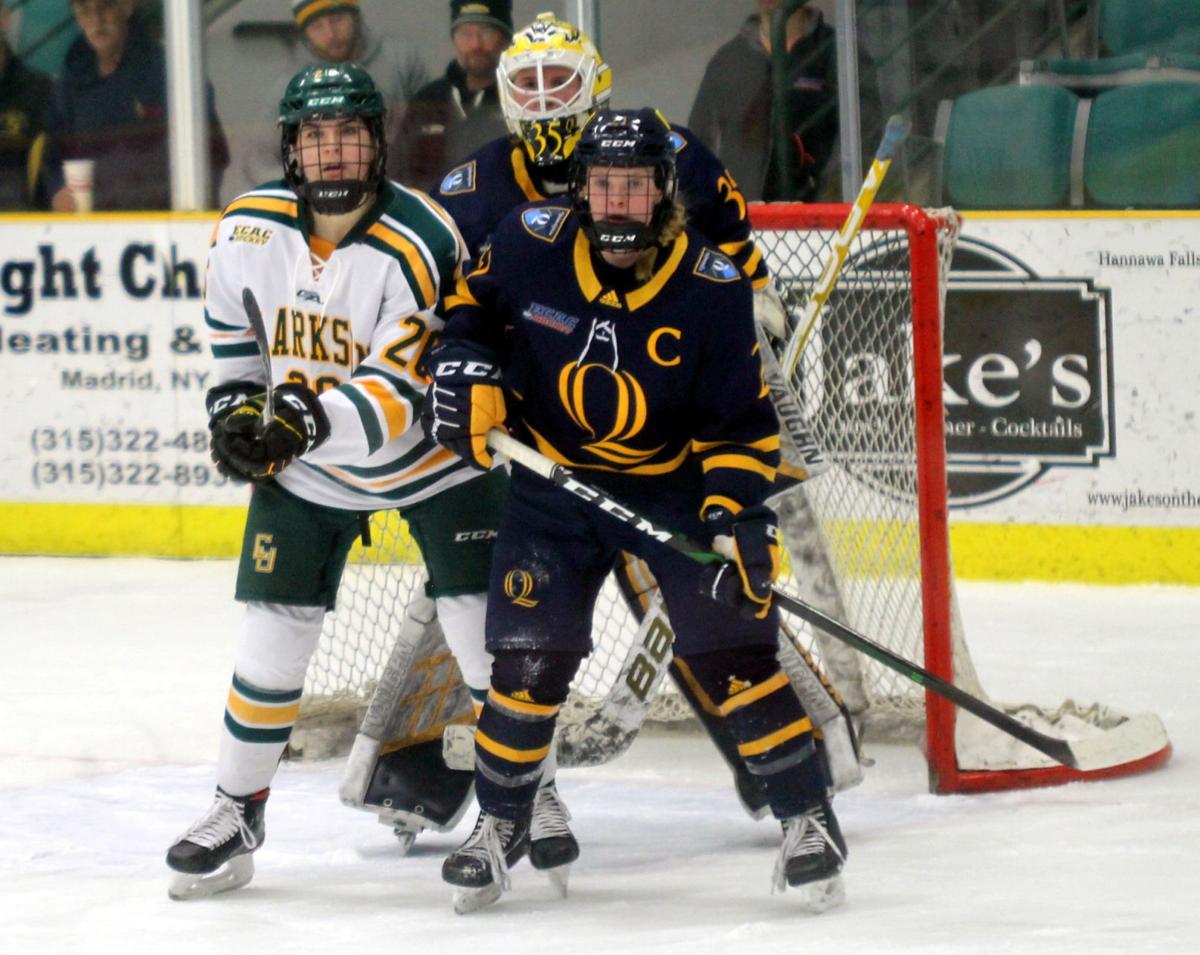 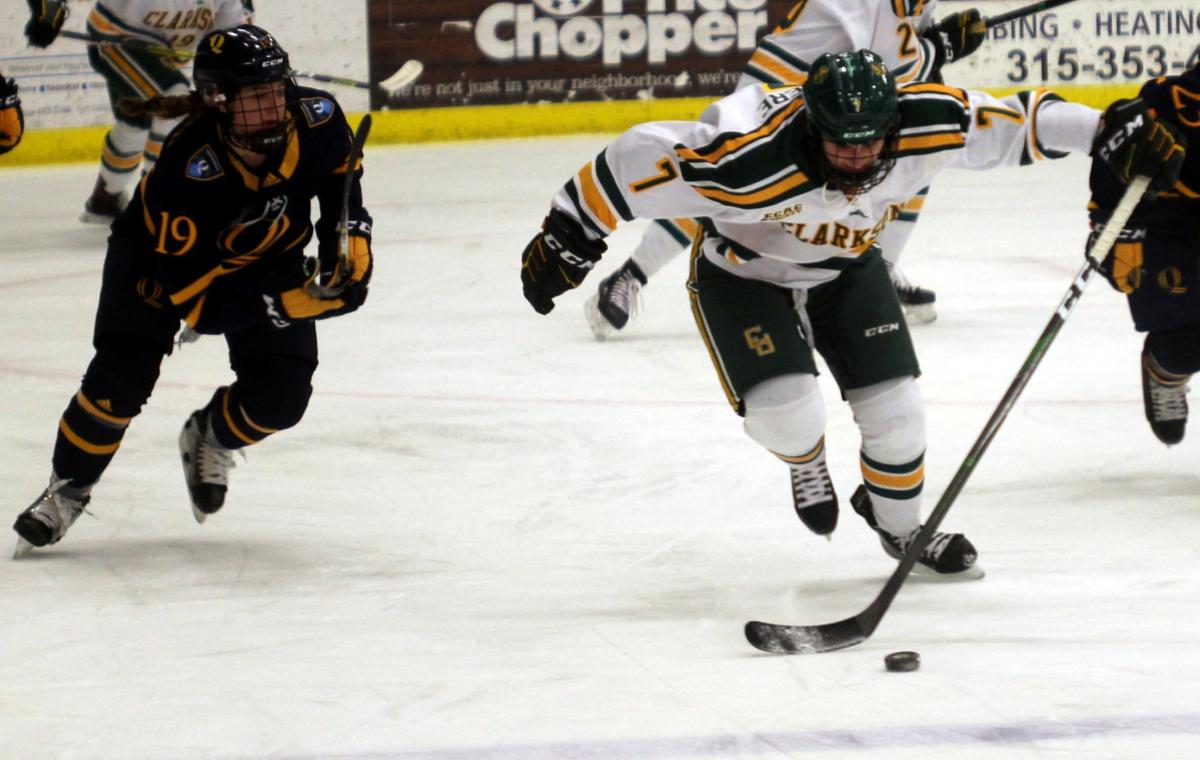 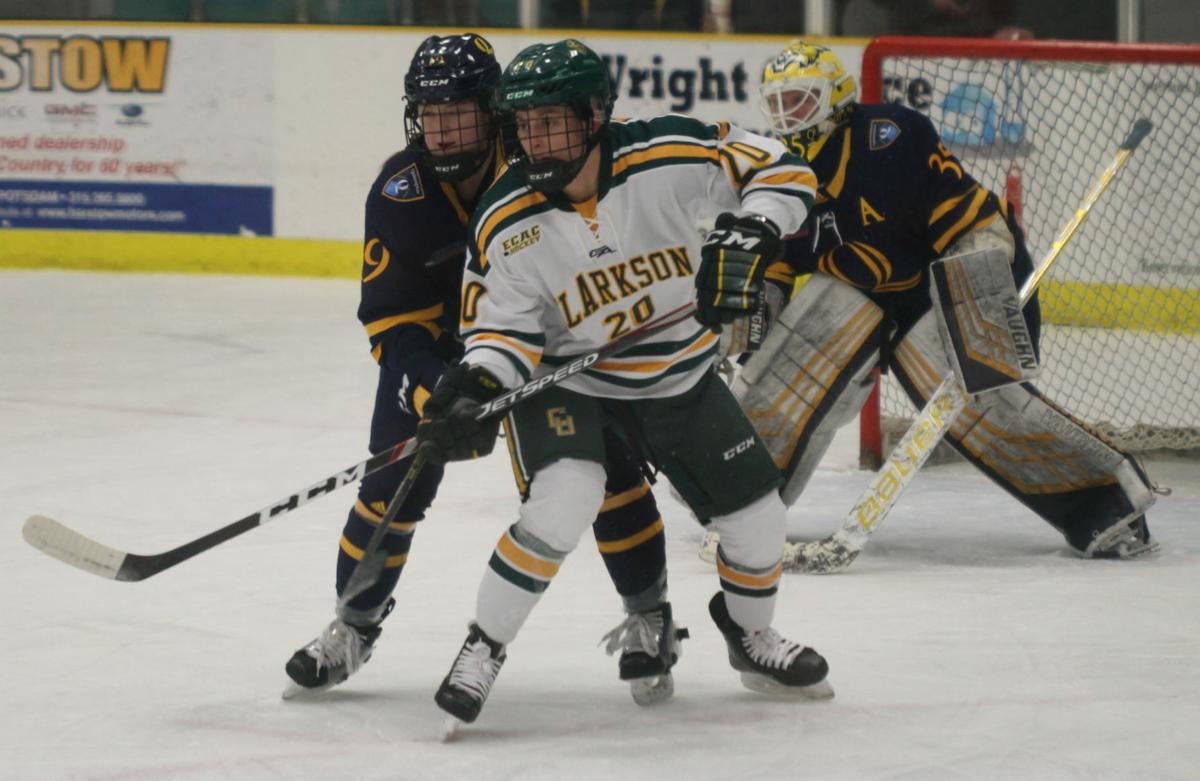 POTSDAM - Three goals in a stretch of barely five minutes in the second period was all the offense that could get past either goaltender on Friday night as the Clarkson University women’s hockey team saw its six-game conference unbeaten streak come to an end with a 2-1 loss against Quinnipiac in ECAC Hockey play at Cheel Arena.

The Golden Knights, tied for sixth in the latest USCHO.com poll, fell to 20-5-6 overall and 11-4-4 in conference games, while Quinnipiac, 10th in the national poll, moved to 18-10-3 and 10-7-2. Clarkson will celebrate its Senior Day when the program hosts fifth-ranked Princeton University on Saturday afternoon.

Clarkson controlled the first period with 20 shots compared to Quinnipiac’s eight attempts, but very few of those tries actually made it through to challenge either of the goaltenders. The Bobcats put together a strong run on defense when they were whistled for two tripping penalties almost back-to-back. However, Clarkson produced just four shots, three of which went wide and one that was blocked, with no saves necessary by Abbie Ives.

The sluggishness from both offenses was gone by the second period as each team produced a goal less than 30 seconds apart. With a little over five minutes gone from the game clock in the middle frame, Clarkson had a scoring chance as the puck passed through the slot, but no contact from two players could put a shot on the Quinnipiac goal. The Bobcats took advantage, getting possession going the other way and a 1-on-4 shot attempt looked to be easily swept away. The pad save was made, but when the Knights tried to rush the puck out of the zone near the boards it was blocked by Laura Lundblad. She then sent a pass to a wide open Grace Markey on the other side of the ice, and Markey took a step forward and lifted a shot over the shoulder of Marie-Pier Coulombe at 6:15, ending a scoreless streak of nearly 180 minutes by Clarkson’s sophomore goaltender.

Although the Knights trailed 1-0 after the opening goal, they took little time tying the game up. After the faceoff the puck was in the Clarkson defensive zone, but Emily Wisnewski gained possession behind the net and sent a pass to Elizabeth Giguere near the top of the circle on the left side. Giguere then flipped the puck skyward to Brooke McQuigge, who gained possession just outside of the Quinnipiac zone. McQuigge was alone against two Quinnipiac defenders, and all of the attention was on the freshman. That turned out to be a big mistake as Giguere had skated hard down the ice and was ready for a return pass from McQuigge, burying a shot up close at 6:38 to tie the game 1-1.

Despite the tie, Quinnipiac continued to hold the momentum and scored what proved to be the game-winning goal about five minutes later. A head’s up play by Grace Markey confused the Clarkson defense with two Quinnipiac players behind the net. Markey collected the puck and was followed by a Clarkson defender, but instead of circling back in front or sending a pass out to a player along the boards or at the point, she instead dumped the puck back to Sarah-Eve Coutu-Godbout behind the net, and the senior forward did the rest, stuffing the puck inside the post from behind the net at 11:31.

Although Clarkson and Quinnipiac played even according to the stat sheet in the third period, the Knights found themselves down a player for a significant portion of the period. The finally stanza began with Clarkson on the penalty kill and twice the Knights were called for penalties. The most significant one came late when Clarkson was trying to make its comeback. On a 3-on-2 by the Bobcats, Ella Shelton dropped down to block a shot and was successful, but on her way back up she nicked a Quinnipiac skater and inadvertently tripped her. During that power play chance, Quinnipiac was held without a shot.

Coulombe was twice removed from the net in the final two minutes, but the extra skater provided Clarkson with few legitimate scoring chances down the stretch.

Coulombe finished with 24 saves and Ives made 22 stops for Quinnipiac. Neither team scored on the power play, with Clarkson going 0-2 and the Bobcats 0-4. Quinnipiac finished with a 26-23 edge in shots on goal.

Has your household had trouble finding toilet paper in stores?