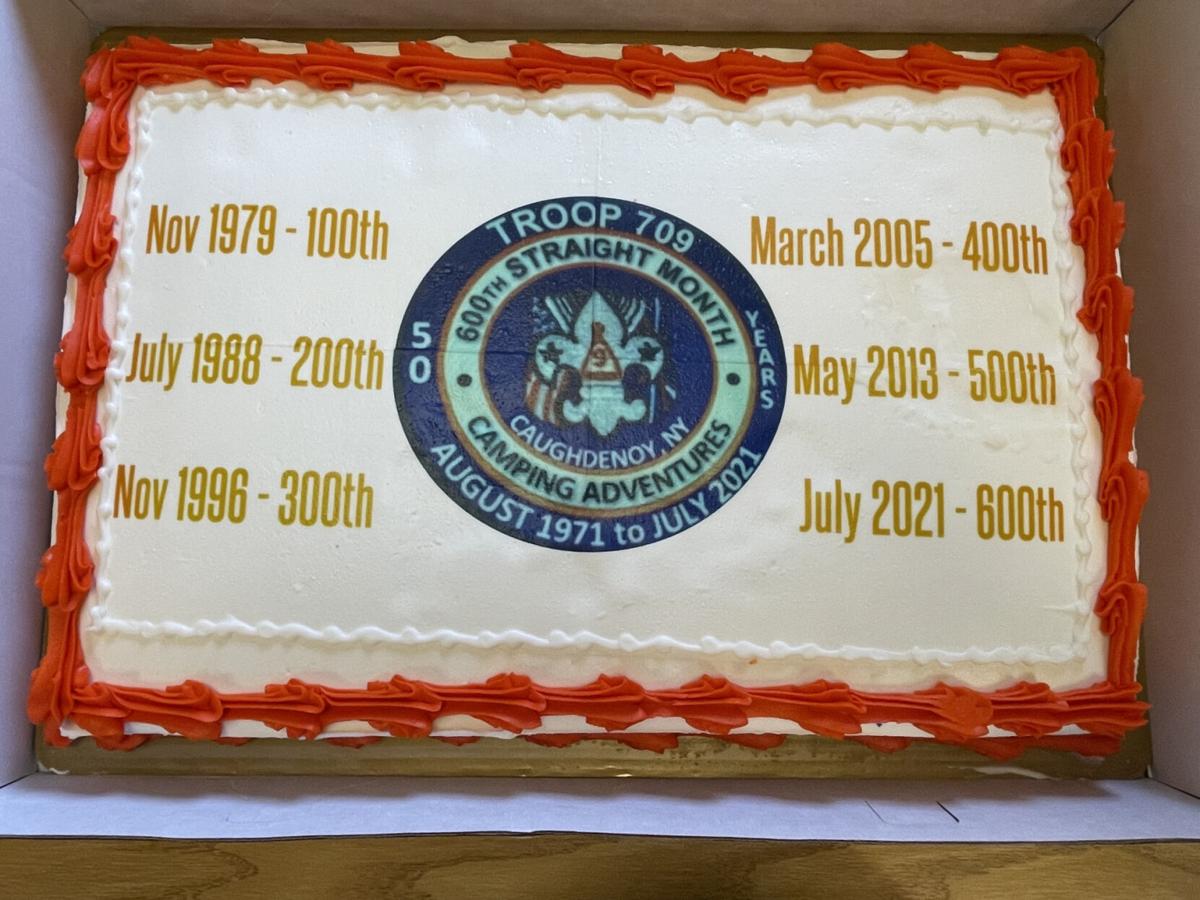 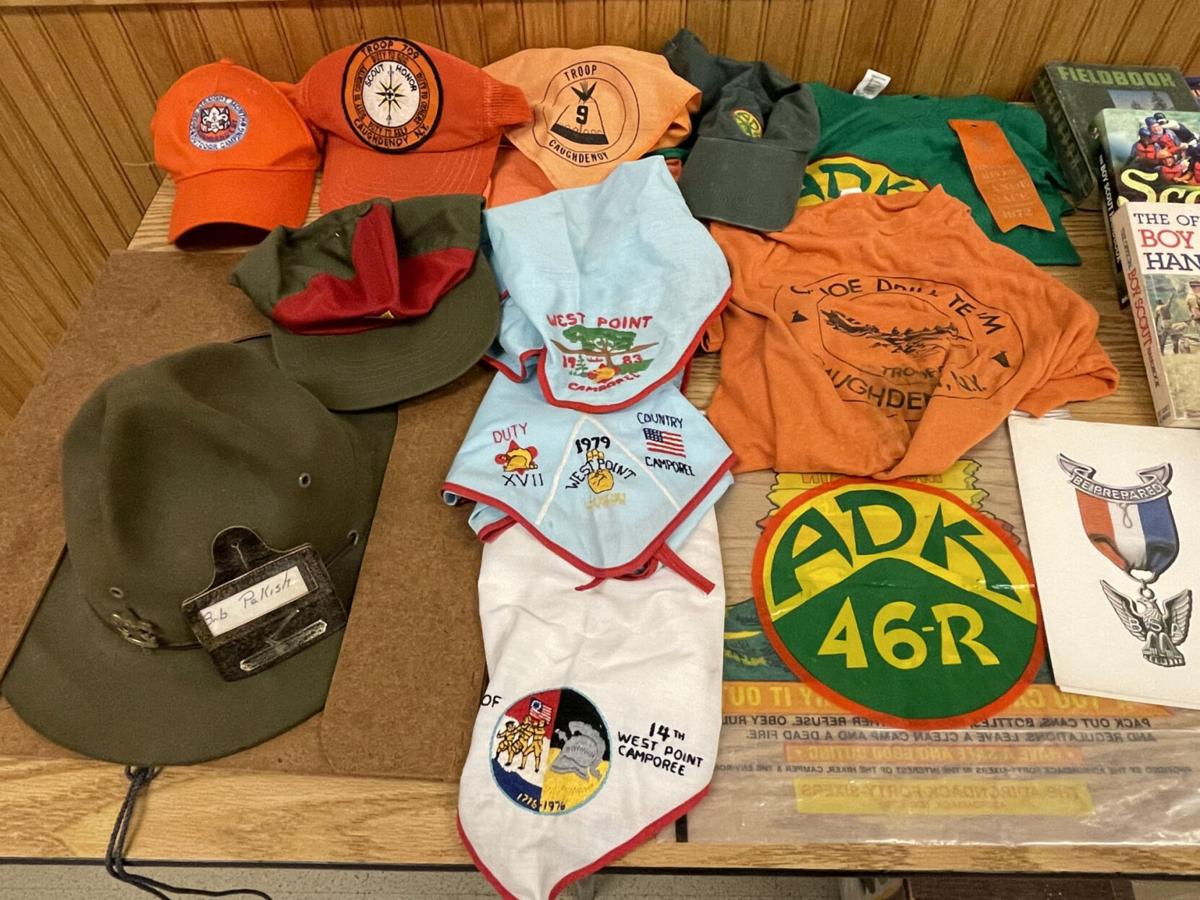 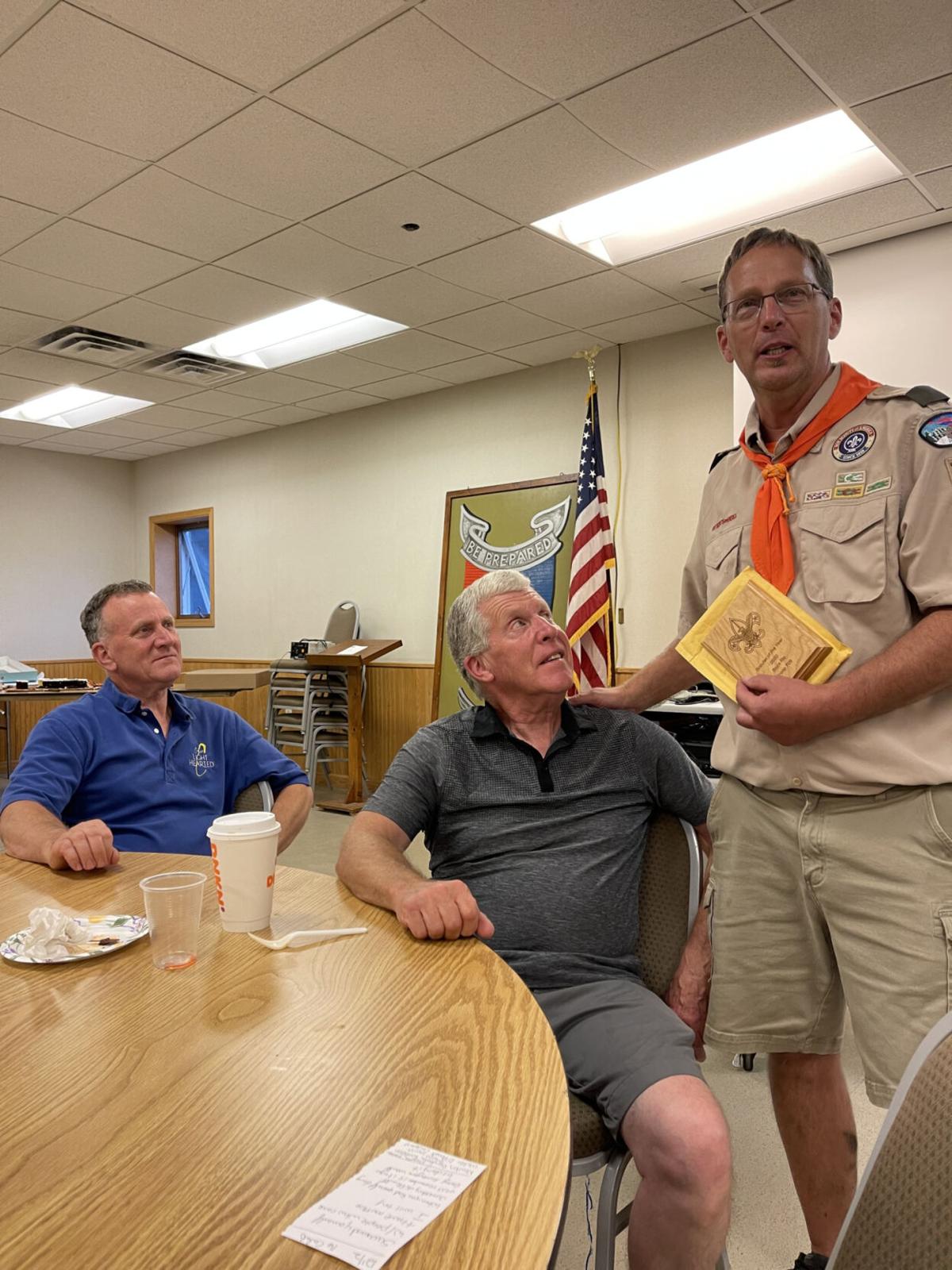 This monumental event of 600 campouts was celebrated at the Caughdenoy Fire Department. There were displays, patches and trading, stories, and food. It was somewhat of a reunion. Scouters young and old came together to reminisce about their time in scouting.

Mr. Wiseth started everyone out with grace. Then there was a social time and the meal was delicious! Included was chicken, ziti, meatballs, tossed salad, fruit salad, macaroni and cheese, pizza and a dinner roll. For dessert there was an amazing cake that chronicled the troops successes in camping. Peter, who came from the farthest away (Charlotte, N.C.) cut the cake at perfect time… 7:09 p.m.

Then came the story sharing. First up was Vern Robinson and Heather Stevens. They shared a story of a young scout who joined Cub Scouts in 1969. He went on to become a member of Troop 709 where he earned the rank of Eagle Scout in 1978. Their story went on to tell of this patriotic, community minded scout who went on to lead Troop 709. He instilled those values and many more including to be kind, generous and humble in his scouts. Vern and Heather wrapped up their story by surprising the said Scout with a plaque and the honor of Ontario District Scouter of the year… Mr. Bruce Rio.

In true Bruce form, he paused… gathered himself and humbly went on to thank all those great role models who came before him and have served beside him. Names like Newton, Bendura, Dagata, Robinson, Van Allen. Billelo, Reed, Wells, D’Aoust, Pakish, Obrist and Chidsey to name a few.

Mr. Rio went on to share a story about making coffee with the pot scrubber included! George Reed, the oldest scout present who joined in 1968 under George Pakish recalled when boxing was part of the scouting program. He also talked about camping at the “land” with waking up to three inches of snow, 50 mile hikes, Frankenstein “plastic tents”, the raft above the Caughdenoy Dam and more. You could see the twinkle in his eye as he was transported back to his youth.

Another gentlemen talked about a 250 mile canoe trip to get the 50 miler patch. The troop started in Brewerton and paddled to Sylvan Beach. They camped in Utica. Then they came back the barge canal to Albany and Fort Ticonderoga. Finally, they grabbed driftwood, lashing it together and using their tents as a sail to make the paddling easier.

Several talked of Don Reed also known as “Old Blue” who took the younger scouts under his wing and then how the scouts graduated to Mr. Bendura who taught the scouts to yodel!

It was a wonderful evening of friendship and tales of shenanigans and youth.