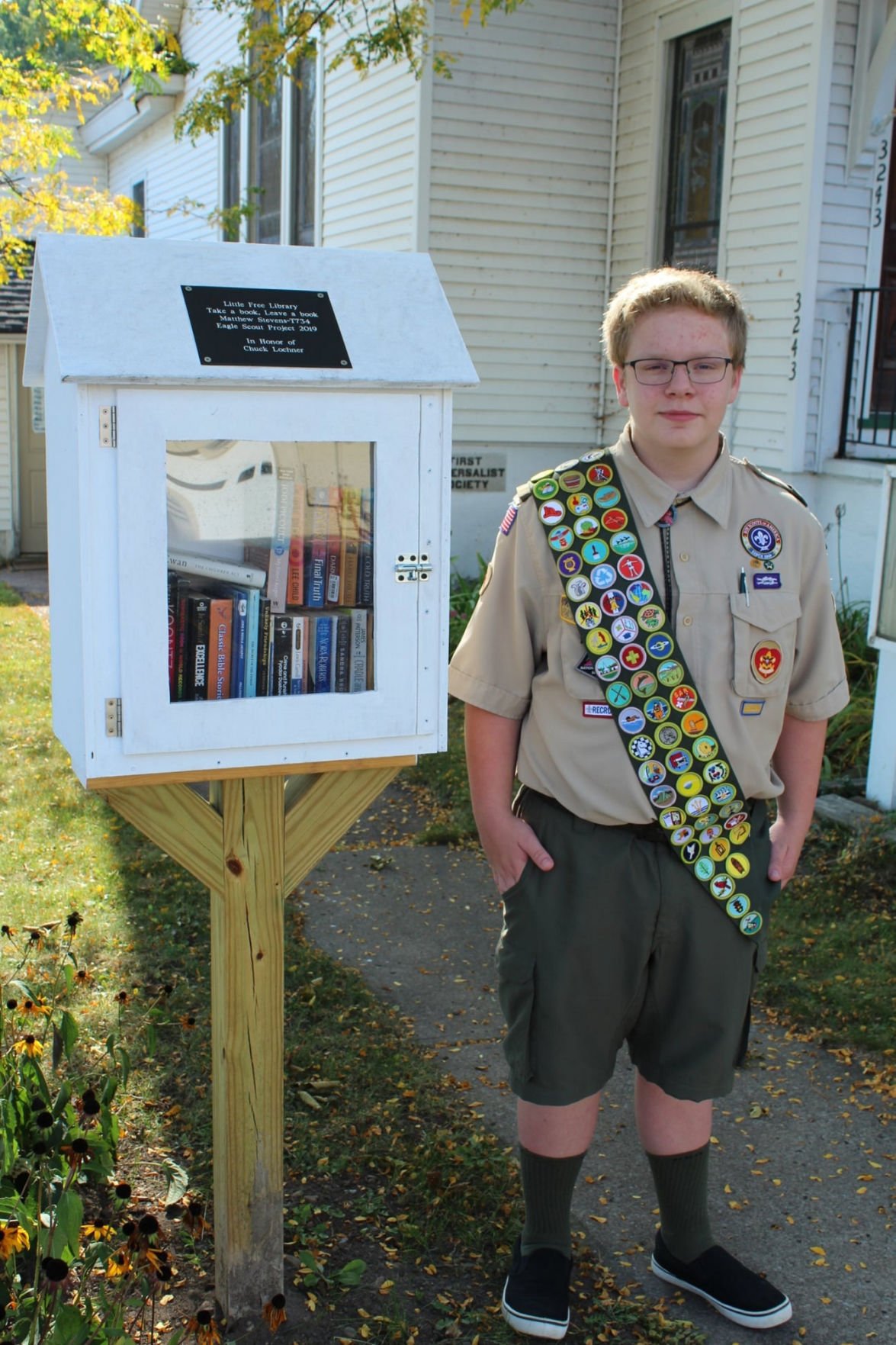 Matthew Stevens standing beside the free library he built as part of his Eagle Project. 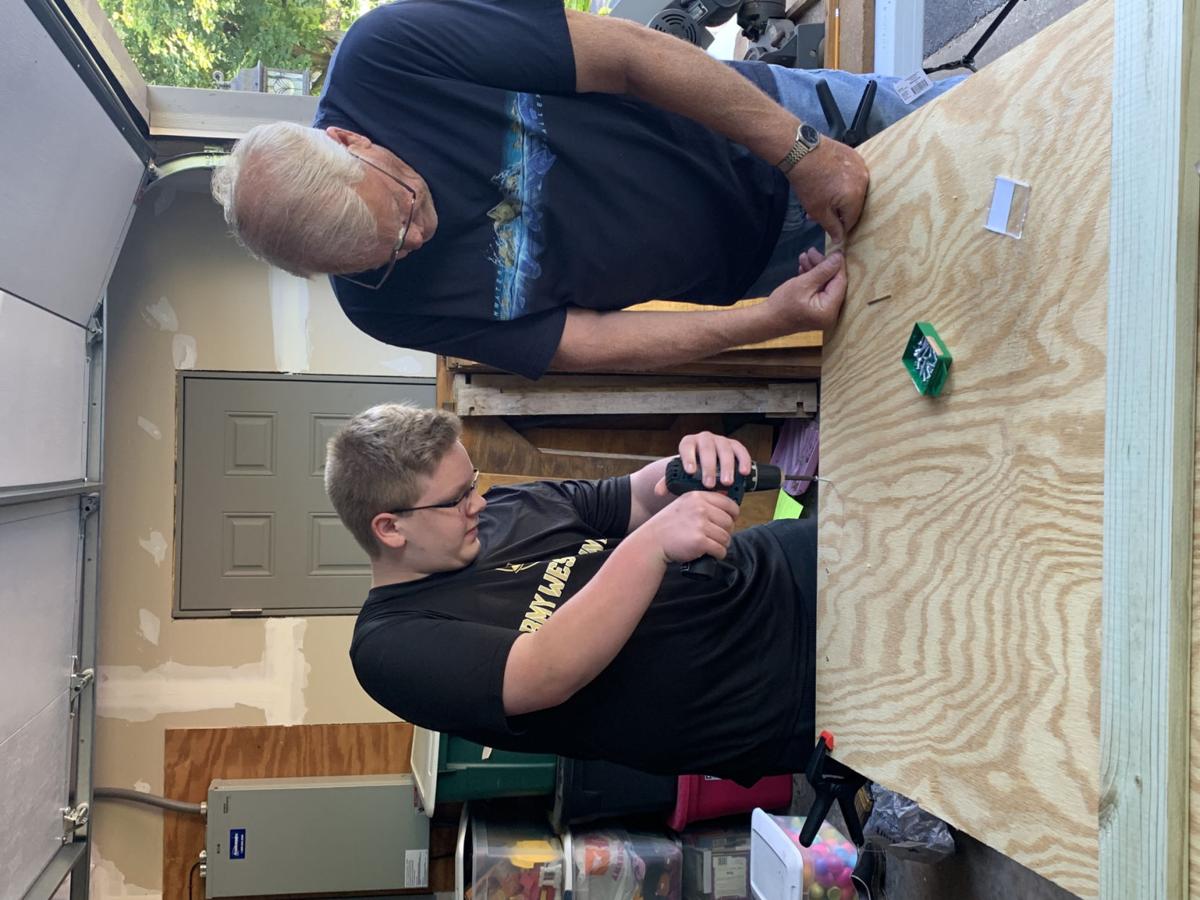 Matthew Stevens and his grandfather Larry Robinson working together on one of Stevens’ projects. 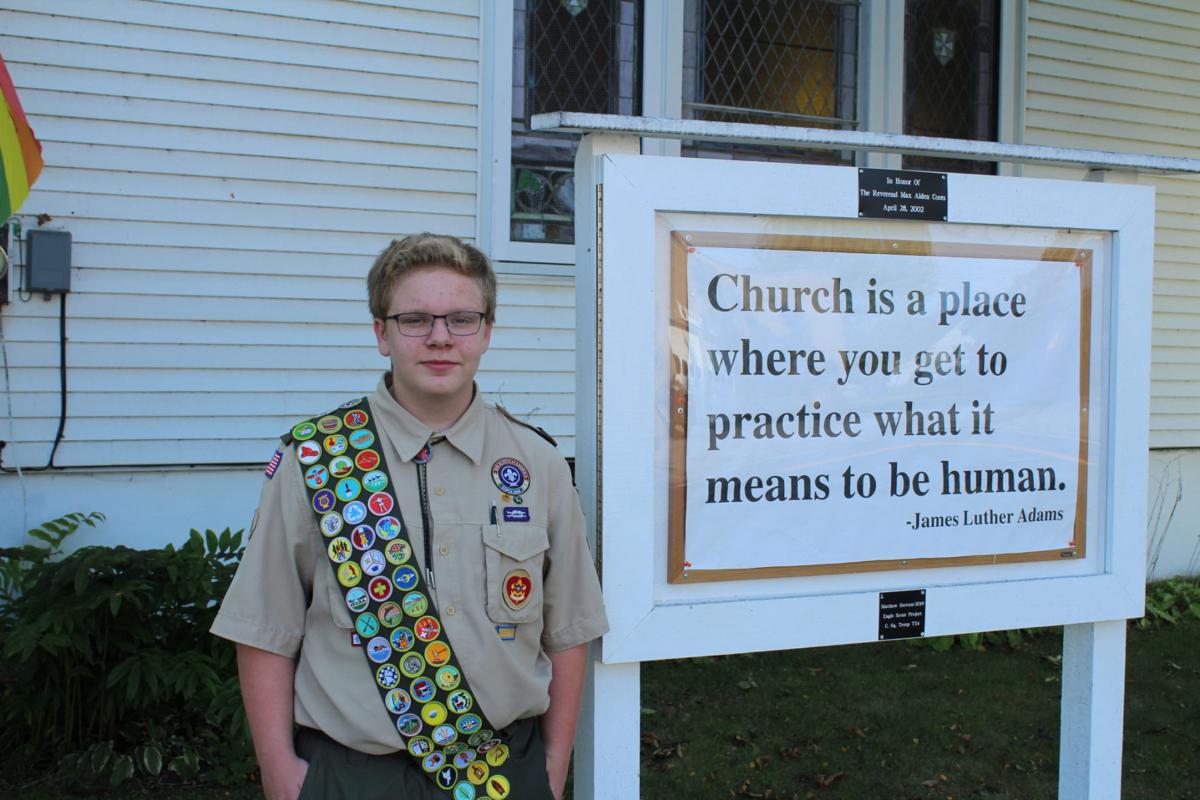 Matthew Stevens next to the wayside pulpit he rebuilt. 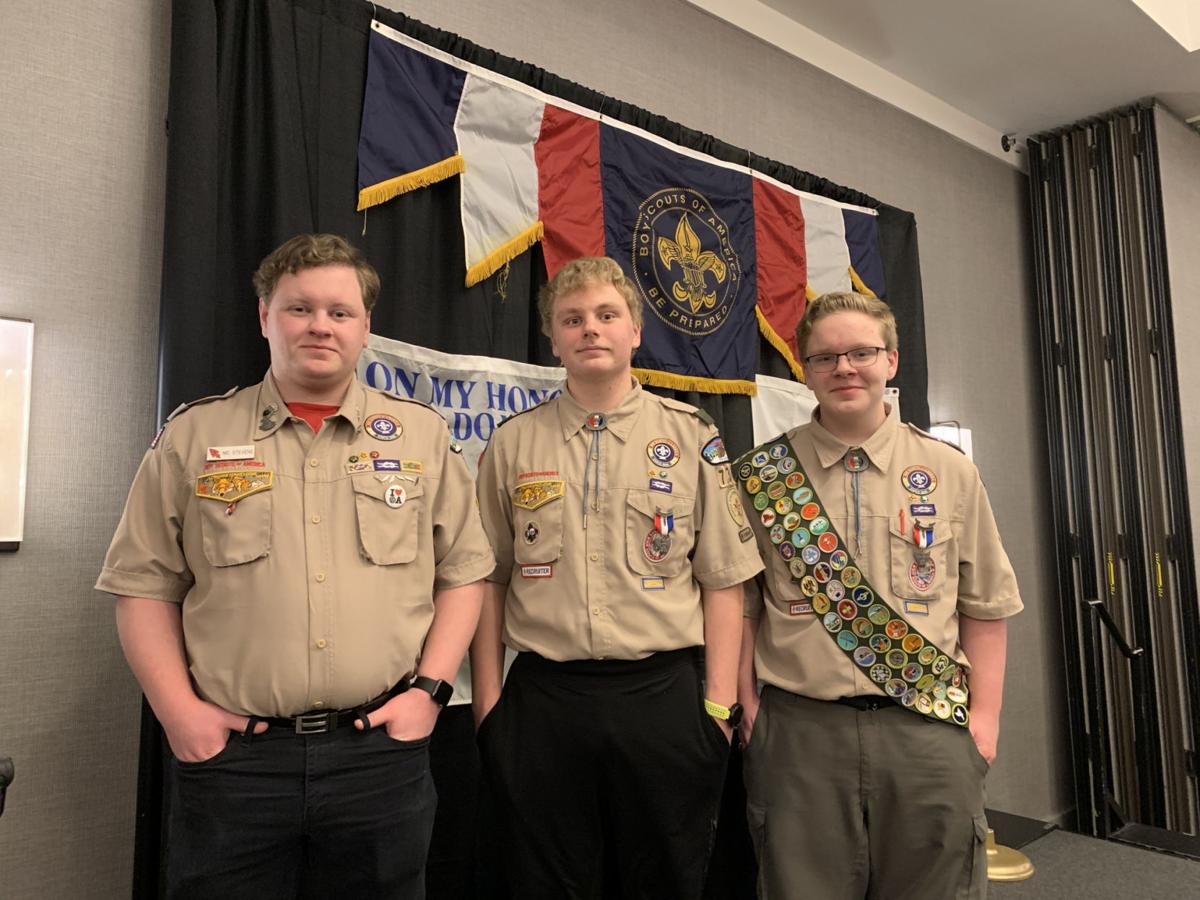 Pictured are Matthew Stevens and his brothers Nic and Ben.

Matthew Stevens standing beside the free library he built as part of his Eagle Project.

Matthew Stevens and his grandfather Larry Robinson working together on one of Stevens’ projects.

Matthew Stevens next to the wayside pulpit he rebuilt.

Pictured are Matthew Stevens and his brothers Nic and Ben.

Matthew Stevens, son of Dan and Heather Stevens of Central Square, is following in the footsteps of his siblings. He is a member of Central Square Boy Scout Troop 734, sponsored by the Central Square Fire Company. Matthew completed his eagle project just before his 14th birthday. The Eagle Scout award is the highest achievement or rank attainable in the Boy Scouting program and among its most familiar icons. The designation of Eagle Scout has a long history since its founding over 100 years ago. Only 4% of Boy Scouts are granted this rank after a lengthy review process. Matthew may seem young for this accomplishment at first glance. However, it seems to be a family tradition to strive for this achievement. Matthews sister, Kayleigh, earned the Girl Scout Gold Award and his brothers, Nic and Ben are both Eagle Scouts. So the path to Eagle just seemed natural for Matthew.

In kindergarten Matthew joined Cub Scouting as Lion Scout with Pack 711. He continued up through the advancements to Tiger, Wolf, Bear and Webelos. He earned the regular advancements as well as several arrow points, The Outdoor Activity Award and the World Conservation Award. He earned the Light of Christ and Parvuli Dei Catholic Religious emblems and finished his Cub Scout path by earning his Arrow of Light. Several people guided Matthew through Cub Scouts. People such as Jill Gillette, Matt Pauquette, Steve Peters and especially Fran Jeroloman, made it possible for him to have these experiences that would set him up for Boy Scouts. On a special note, there were several years when Matthew was basically the only cub in his den. His sister Kayleigh attended the Pack meetings but without the support of Fran he may not have made it though Cub Scouts. She was his den leader most of the later years. She took the time, even on weekends to help Matthew advance and have fun. She prepared him so that he would bridge a couple of months early so that he would not become bored.

After Cub Scouts Matthew officially joined Central Square Boy Scout Troop 734 in March 7, 2016. We say officially, because he had already been involved with the troop along with his brothers for some time. As a new Scout his first task was to learn about Scoutings ideals...the oath and law. The slogan and motto. By pledging to live by these guidelines he became a full-fledged Scout and earned the Scout badge on June 6, 2016. He also assisted with an eagle project for his brother Nicolas, which was earned June 19, 2016.

Troop 734 proved to be a troop that would help him grow as a person and hold many adventures along the way. Matthew’s new Scout badge stayed on his uniform for only a month. He worked through the Tenderfoot requirements memorizing the oath and law, went to Spring Camporee and completed his 10-mile hike. He learned his basic first aid skills, did some community service and on July 20, 2016, just days before heading to Sabattis he became a Tenderfoot Scout.

He loved Sabattis, things like challenge valley and Austin’s peanut butter disaster dutch oven cake and cooking competitions with Kayleigh. He canoed to Frying Pan Island and hiked to look out point. Shortly after returning from summer camp he attended the Brotherhood Camporee in Wellesley Island with the troop. He continued to be active in the troop, he learned about nature and orienteering at his first Scout-O at Highland Forest. Matthew participated in service projects and was earning some merit badges along the way. Doing these things and more earned him the second-class rank on Nov. 28, 2016.

Next up, Matthew assisted building bluebird houses and roosting boxes for troop member, James’ Eagle Project. He attended the 2017 Klondike and earned First Class rank Feb. 6, 2017. In just one year he had advanced quickly and already earned 31 Merit badges (21 are needed for Eagle Scout).

In March 2017 the Order of the Arrow visited our troop. Matthew along with one other Scout was elected to become a member. Not yet a “brother”, Matthew attended the Lowanne Nimat Bash with his brothers. At this point many Scouts pause for a well-deserved rest, however not Matthew! He was following closely in the footsteps of his brothers, Nic and Ben. The path ahead was clear, he wanted to be a member of the Order of the Arrow and an Eagle Scout. He continued to participate in service projects and serve in troop leadership positions. From May 5-7, 2017 Matthew participated and completed his Ordeal Weekend. The weather was non-stop rain and cold. However, that does not stop a brother from cheerful service. The ordeal is designed to challenge Scouts and Scouters, mentally. Will you work hard to make the camp as good as possible, or will you do the least amount possible? Will you deny yourself and put others ahead of your own desires? Will you show your true honor by keeping promises that you have made? These are all questions you will need to answer to yourself during the ordeal. In the end he was proud to become a member of the lodge.

Matthew attended the 2017 Spring Camporee, Conclave with the O.A. and participated in the Safety Day at Walmart with our troop. With hard work and persistence, he made the decisions and earned the star rank on June 6, 2017.

For the next rank it seemed no harder than Star. He had already earned all of the necessary merit badges so he focused on leadership and more service hours. Then only about six months later, Matthew became a Life Scout on December 6, 2017, one step away from eagle at the age of 12½ years old. This was a hard time for Matthew. Matthew had the drive for Eagle but was young. In school he became student council vice president and began attending several leadership seminars.

He would remain a Life Scout for about 1½ years. Over that time, he went on to complete his Brotherhood in Order of the Arrow, he assisted on his brother, Ben’s Eagle project, went on troop campouts, summer camp at Camp Tuscarora, Camp Barton and Sabattis. He would attend the West Point Camporee and CTC with Oswego Troop 888, attend day camp and continue providing cheerful service. Matthew became student council president in eighth grade and was appointed vice chief of communications in his OA lodge. Matthew also attended NLS (National Leadership Seminar for Order of the Arrow). He was busy but restless…he wanted Eagle. Every time he would approach his mom, she would say…you are too young. Wait until you are 14. Matthew continued to discuss his eagle when finally, his mom agreed it should not be age dependent but maturity and leadership dependent. Finally, May 4, 2019 Matthew signed his candidates promise for his Eagle Project. On May 9, 2019 he presented his project to the Eagle Board of review and was approved.

In addition to starting the preparation for his Eagle Project Matthew continued with several other activities. He is active in band, plays rec soccer, participates in archery, was student body president in eighth grade, a member of the student taskforce, began classes to prepare him for his confirmation, continued to remain on the high honor roll in school, and is a black belt in karate. Matthew has attended NYSCLSA (NY State Council for Leadership and) twice, third this month for student government. In addition, he is active in the Order of the Arrow serving his second term as vice chief of communications and attended NYLT (National Youth Leadership Training at Camp Woodland). Recently he was selected as one of two students to represent his district on the NYS Council on Leadership and Student activities.

Matthews Eagle Project was to re-build a wayside pulpit and build a new free library at the Universalist Church in Central Square. He completed his project just before heading to Sabattis for summer camp July 27, 2019. He then appeared before the Eagle Board Sept. 22, 2019 and was awarded his Eagle Scout rank. Matthew recognized James Loomis of Oswego Troop 888 as a mentor at his ceremony. He said that “Mr. Loomis had made a huge impact not only in his Scouting life, but his leadership life. He has always provided wisdom, lessons, and a kind word to help me grow in leadership. If you were to ask a question, he would always provide multiple views while still having you make the final decision, he strongly believes that Scouting is a youth run organization. Throughout my Scouting experience, my mentor has included me on many adventures which have been some of the best experiences I have ever had in Scouting, although some could have been life-threatening. I have never felt closer to the earth in the form of mud then when I am with him. Along the road he has taught me multiple lessons including problem solving, how to not take my self too seriously (tag your it), have fun, and also how to make the most out of any situation.”

In addition Matthew recognized his grandpa, Larry Robinson, who could not be in attendance as a mentor. Matthew spoke that although he only sees him about twice a year, the time they share together truly teaches life lessons. He recalled hearing that his grandfather was a Cub Scout but due to his den leader leaving and no one to take the place, he was unable to move through the ranks. His grandparents have always been involved, but with the distance between they wish there was more things they could have been apart of. Now that his grandpa is retired it provided the opportunity for him to be included in Matthew’s Eagle Project. Matthew then publicly thanked him for all he has done for him.