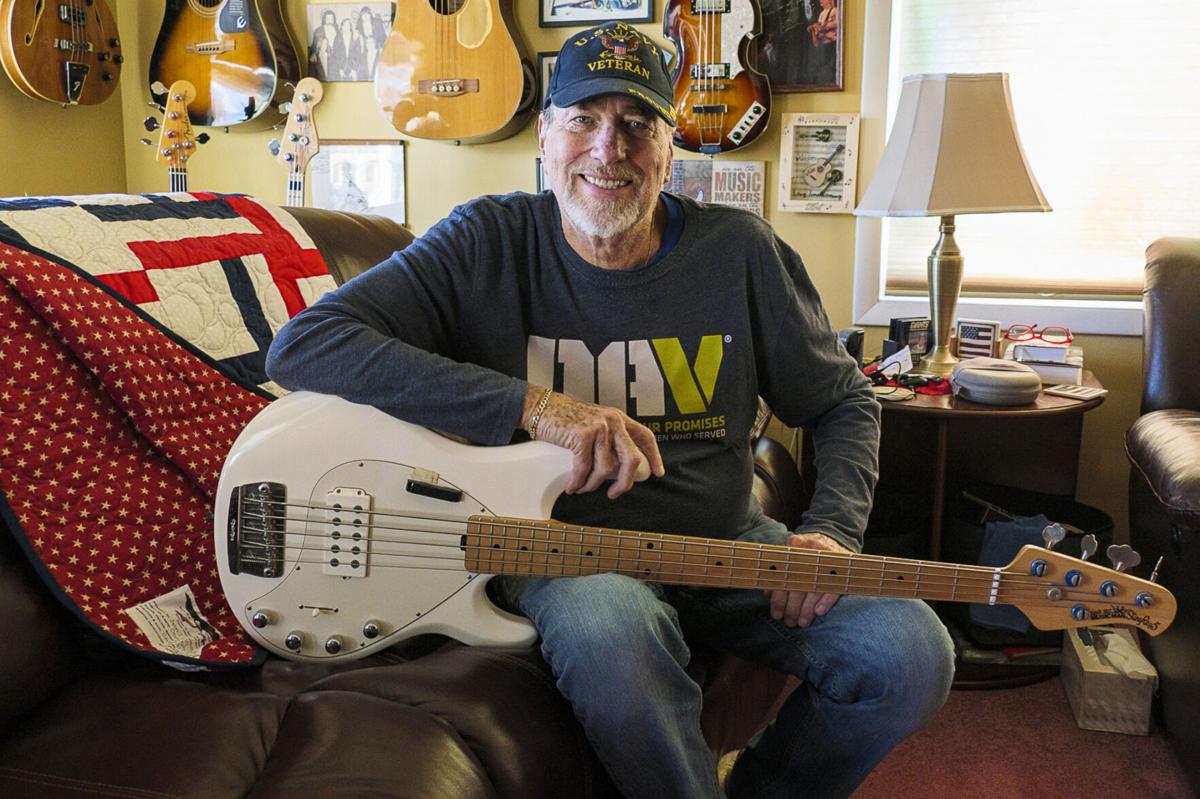 Veteran of the Year and professional musician James Dillabough at his home in Oswego. Randy Pellis/Oswego County News 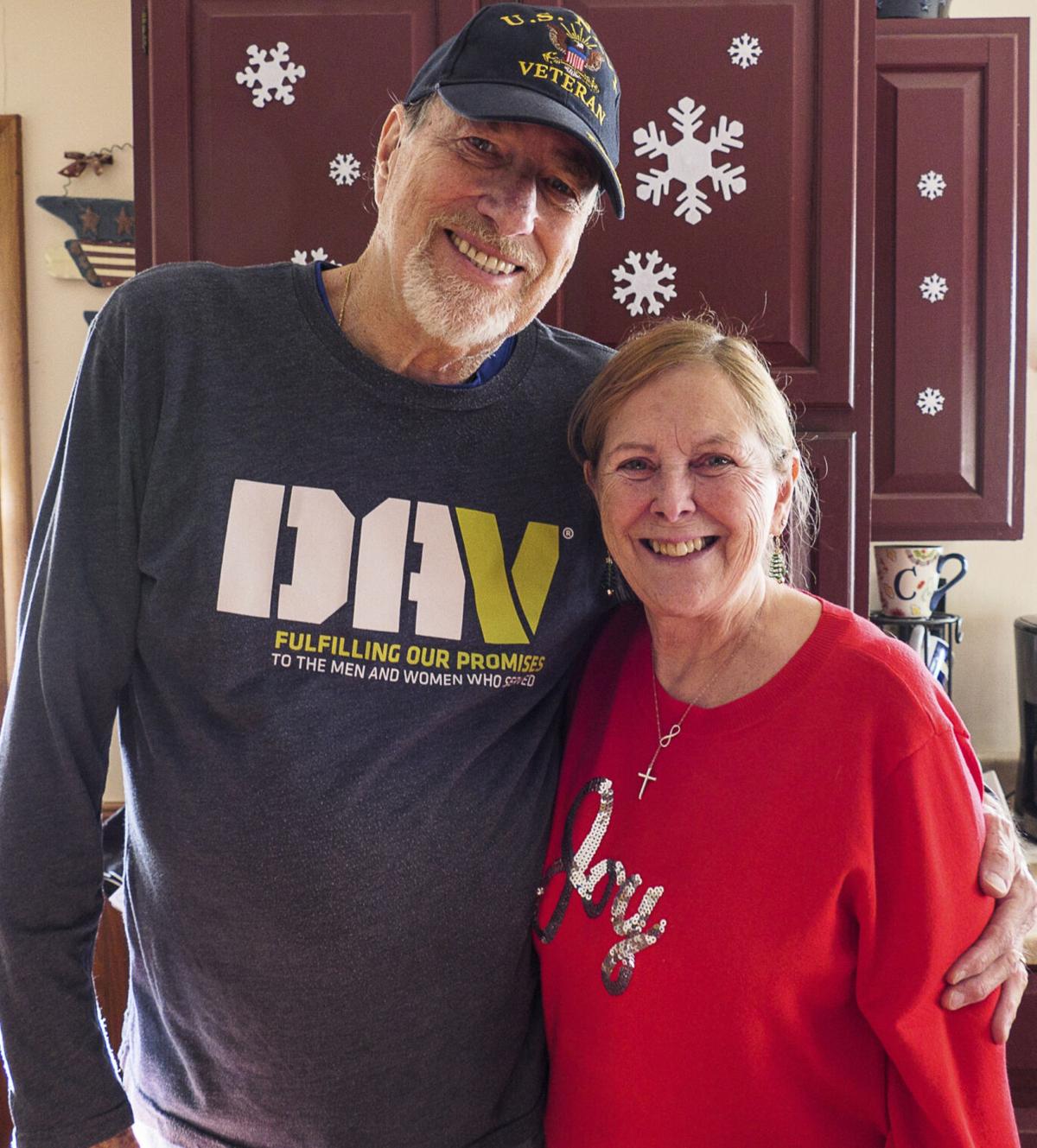 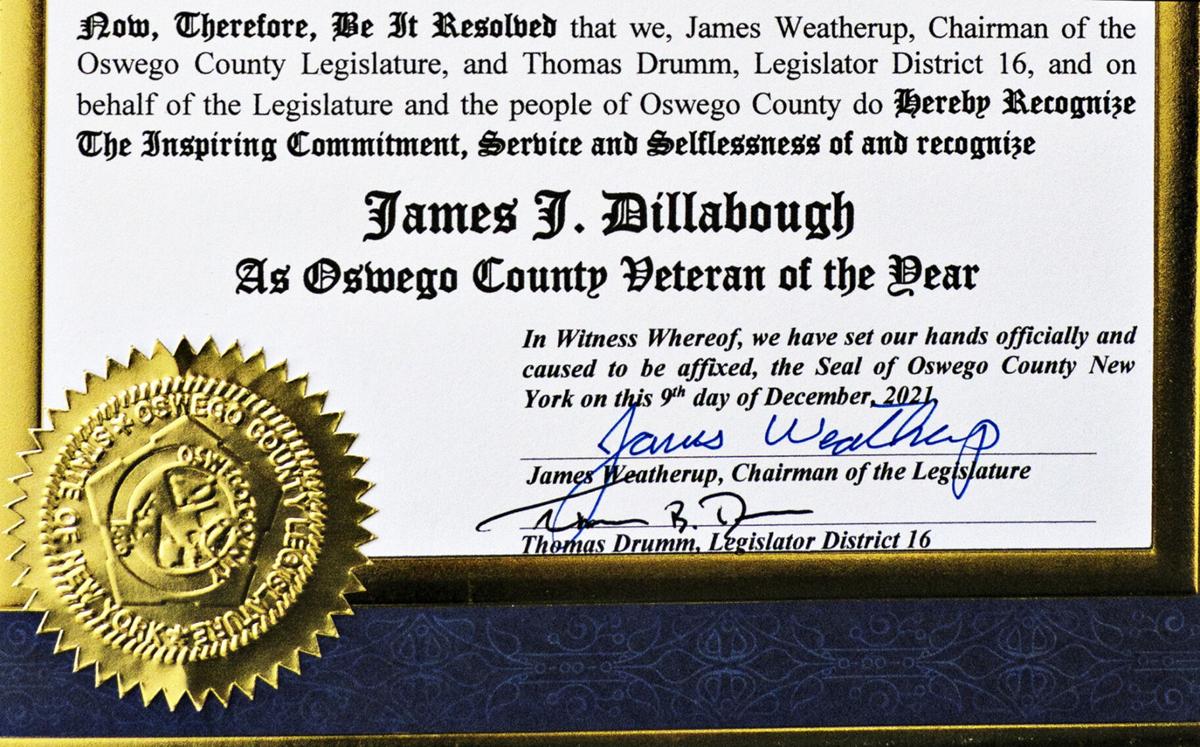 A closeup of part of the Veteran of the Year citation awarded to James Dillabough by the Oswego County Legislature. Randy Pellis/Oswego County News 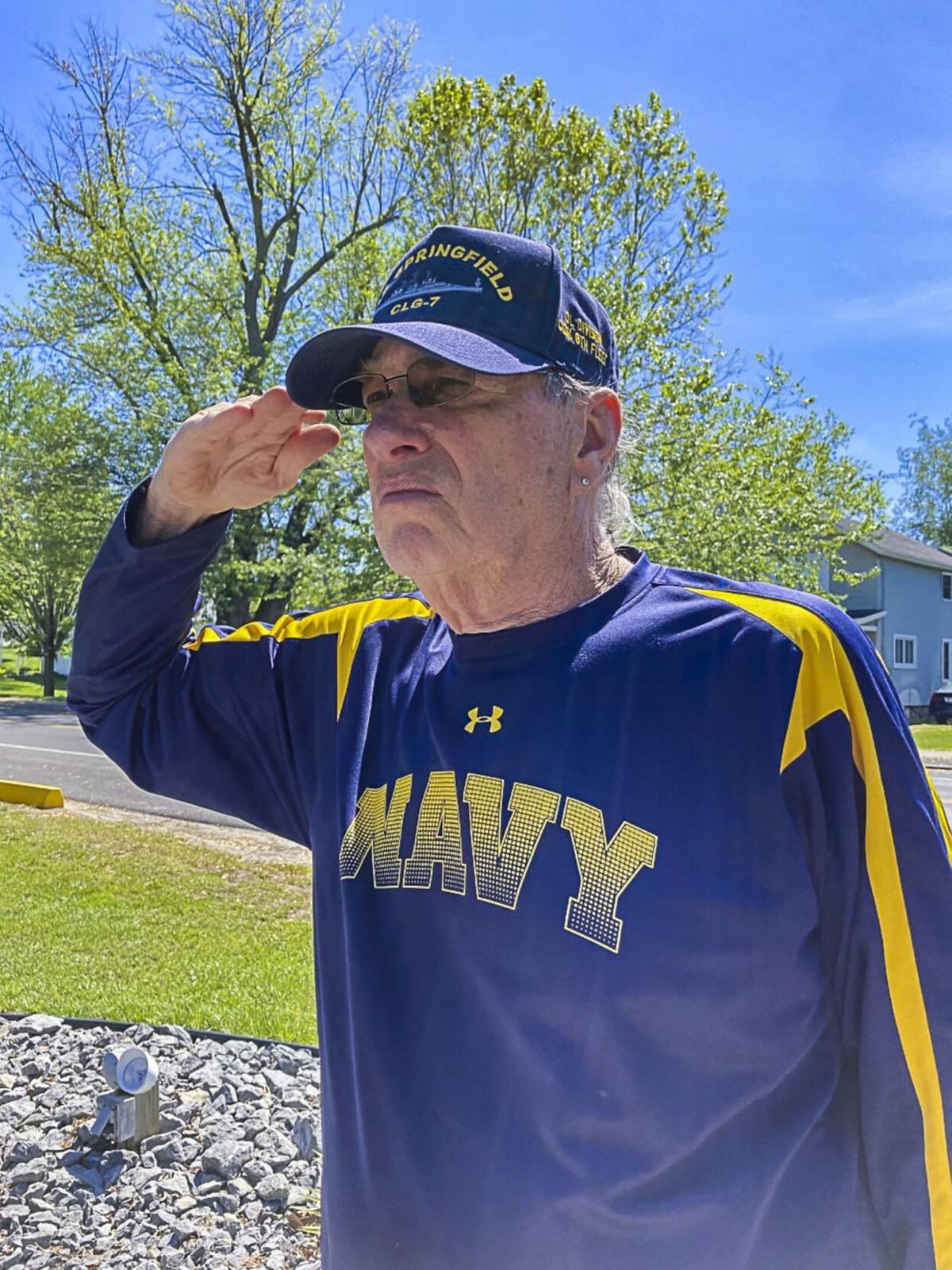 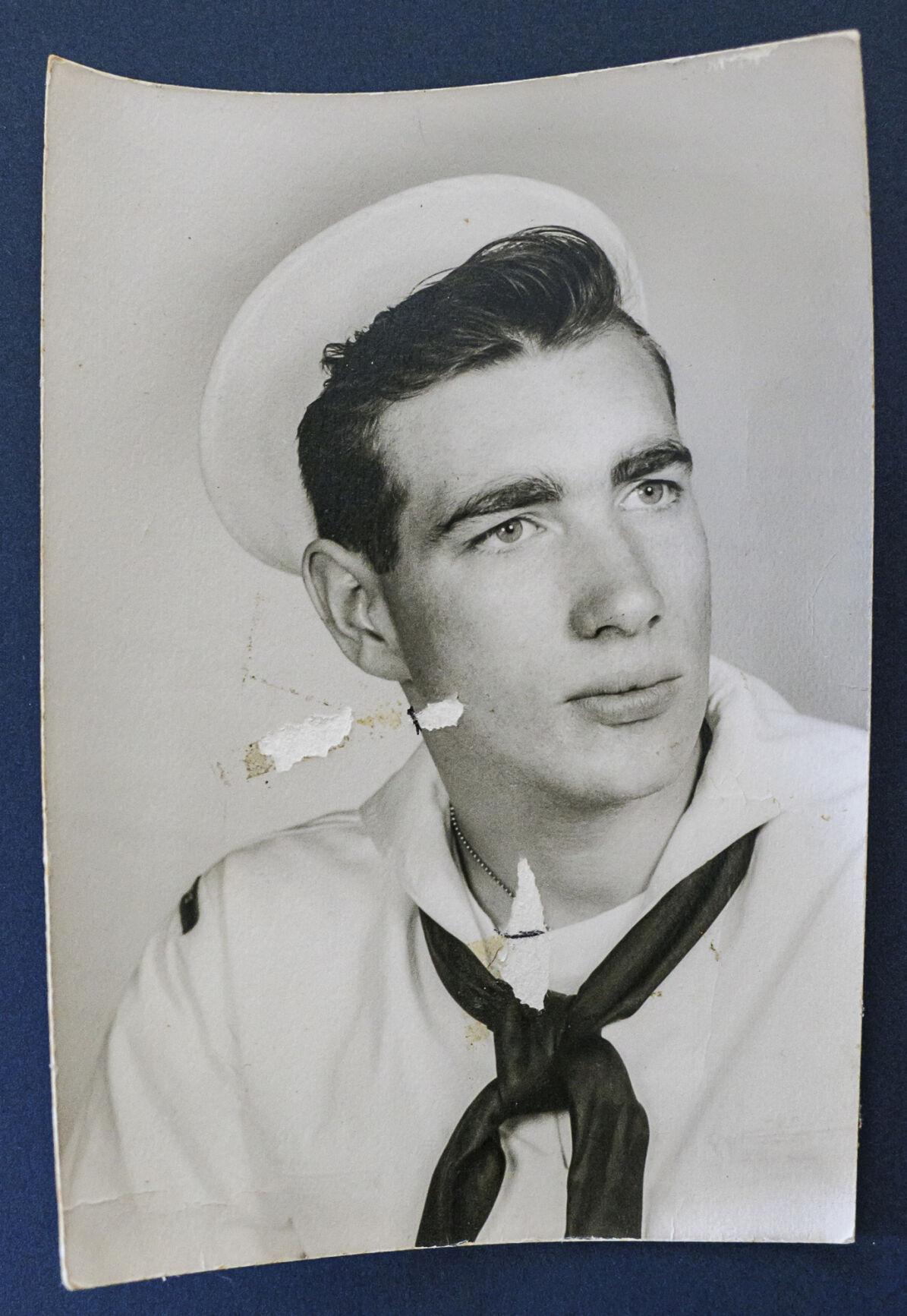 Veteran of the Year James Dillabough early in his Navy career. Photo provided.

Veteran of the Year and professional musician James Dillabough at his home in Oswego. Randy Pellis/Oswego County News

A closeup of part of the Veteran of the Year citation awarded to James Dillabough by the Oswego County Legislature. Randy Pellis/Oswego County News

Veteran of the Year James Dillabough early in his Navy career. Photo provided.

OSWEGO – Some men serve for two years, some for four. Some make it a career and serve for 20. But 60 years ago, a 17-year-old still in high school, whose mother had to sign for him, joined the U.S. Navy, and all these years later, James Dillabough is still serving his country.

Though now, he says, he’s “serving directly to veterans.”

As a member of the local Elks Lodge, Dillabough has made serving veterans his personal mission. And the Elks, the city, and his wife, he said, have been right there with him, providing whatever he needed.

“I couldn’t do any of this without the support I get around here. My wife is first, then the Elks,” he said, smiling at Carol, his wife of 17 years, who smiled back almost bursting with a love and pride that any could readily see.

“I’d also like to thank Mayor Barlow,” he added. “He’s always there for us when we want something.”

“I’m nobody special,” Dillabough said in a recent interview. Obviously, the Legislature sees it differently.

“There’s other people out there more deserving than me,” he said. “I’m quite sure.”

“I just feel, I don’t know how much longer these WWII vets are going to be around,” he said.

It was 1961 when he signed up, but the Navy made sure Dillabough finished high school first. Then, shortly after graduation, he was in. Active duty on a ship of 1,200 men touring mainly the Mediterranean from 1963 to 1965 as a lookout first and then as a personal driver for officers and dignitaries while in port and onshore.

As a lookout, he scanned the skies for planes and the waters for ships, anything that got too close.

As a driver, he met and drove the higher ups in the Navy and government who trusted him never to reveal the conversations he overheard.

On Nov. 22, 1963, Dillabough’s ship, docked in Guantanamo Bay, Cuba, went to battle stations, general quarters as it’s called, repeatedly reminded this was not a drill, though none of them knew why. The enlisted men had no TV, radio or newspapers, and it wasn’t until late that afternoon they learned President John F. Kennedy had been assassinated.

Coming up the American coast from Cuba, he kept asking, “what’s that smell?” and was told by some older crew mates, ‘that’s land.’ And when we got close to it,” he said, “it smelled just rich and green.”

He recalled being stationed on the French Riviera delivering milk and mail to the submarine crews in the bay of Monte Carlo as Grace Kelly, an American actress, then Princess of Monaco, appeared three or four times to say hello to the troops.

He toured a lot of Europe and northern Africa all along the Mediterranean coast.

“We were in port more than we were out,” he said. “We were a showboat,” there to show the power of the American military.

VietNam heated up in those years. Dillabough was never called to serve there, though he met many men who were, some who still relive the horror of it to this day, he said.

His service was not without his own personal sacrifice. His left hand was severely injured in an onshore loading accident. As a serious musician, bass guitar being his instrument, he thought he’d never play again. He spent many weeks in a Naples, Italy hospital where his left forefinger was saved, though it remains in a fused, straight position. Not long after returning to his ship, his finger became infected, and he was sent back to Naples and from there was sent to St. Albans Naval Hospital on Long Island.

And though his left forefinger was now what he called “useless,” he somehow re-taught himself to play that bass and still plays professionally in two bands today.

Is he glad he joined up? “Yes,” he said immediately. “I don’t have to hesitate on that. I saw the world, and I saw people that had nothing, I mean nothing. Just like you see those refugees, they’ve got nothing. And I’m so glad I had America to go back to.”

The Navy changed his life, and despite the accident that changed his hand, his love for the Navy hasn’t changed at all. What changed was on the outside. What seems to have remained the same was on the inside. James Dillabough still wanted to serve.

Back home after the Navy, he worked numerous jobs including nine years with the Oswego City School District. But quite possibly, what made more of a difference than any job in Dillabough’s life was the Elks Club he joined and where he met his wife Carol 25 years ago.

It was there, in the midst of that charitable organization, that Dillabough’s own sense of service and charity came to life again. And again he became a driver of a different group of dignitaries, the disabled veterans of Oswego County.

On Memorial Day the city supplies him with flags that he places on vets’ graves at St. Paul’s cemetery for the Veterans’ Council.

The Elks provide the financing for everything else Dillabough does for the vets, Carol said.

“Sometimes,” James said, “the Elks say to me, ‘Go see what they need. We’ve got some money.’ We try to find who needs something and get it to them.”

He paused for a moment as he did throughout this interview, seeming to remember what so many vets he helps now have endured.

“We have a saying in the Elks,” he said then. “As long as there are veterans, the Elks will never forget them.”