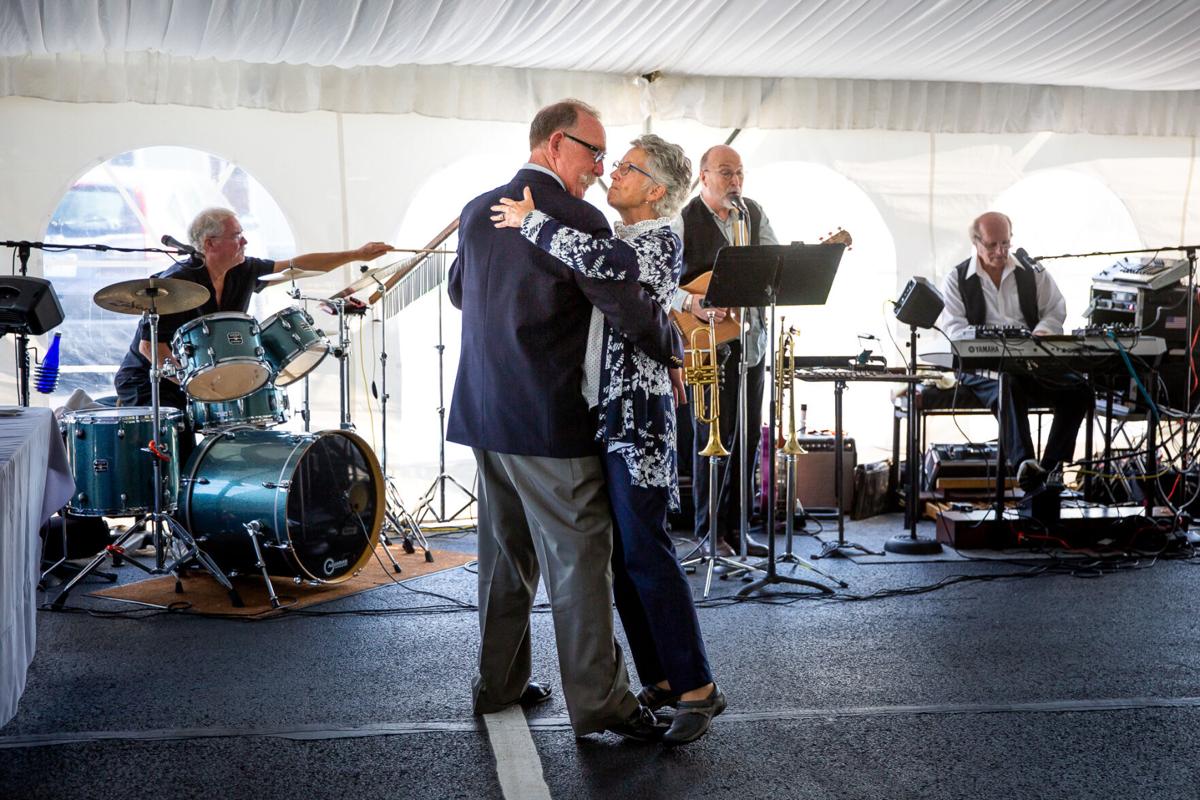 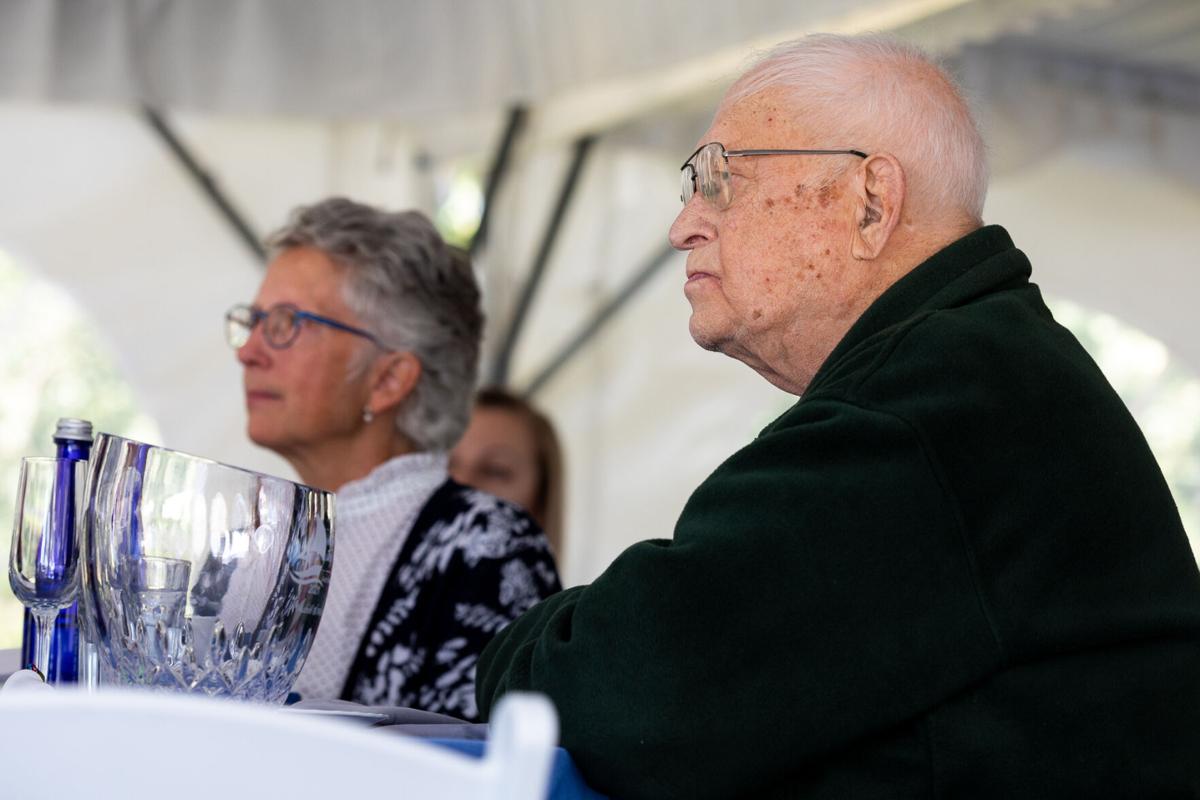 Alongside their children, Tom Walker sits with the Make Every Day Matter Award honoring his late wife, Mabel Walker, on Wednesday afternoon at Hospice of Jefferson County in Watertown. Kara Dry/Watertown Daily Times 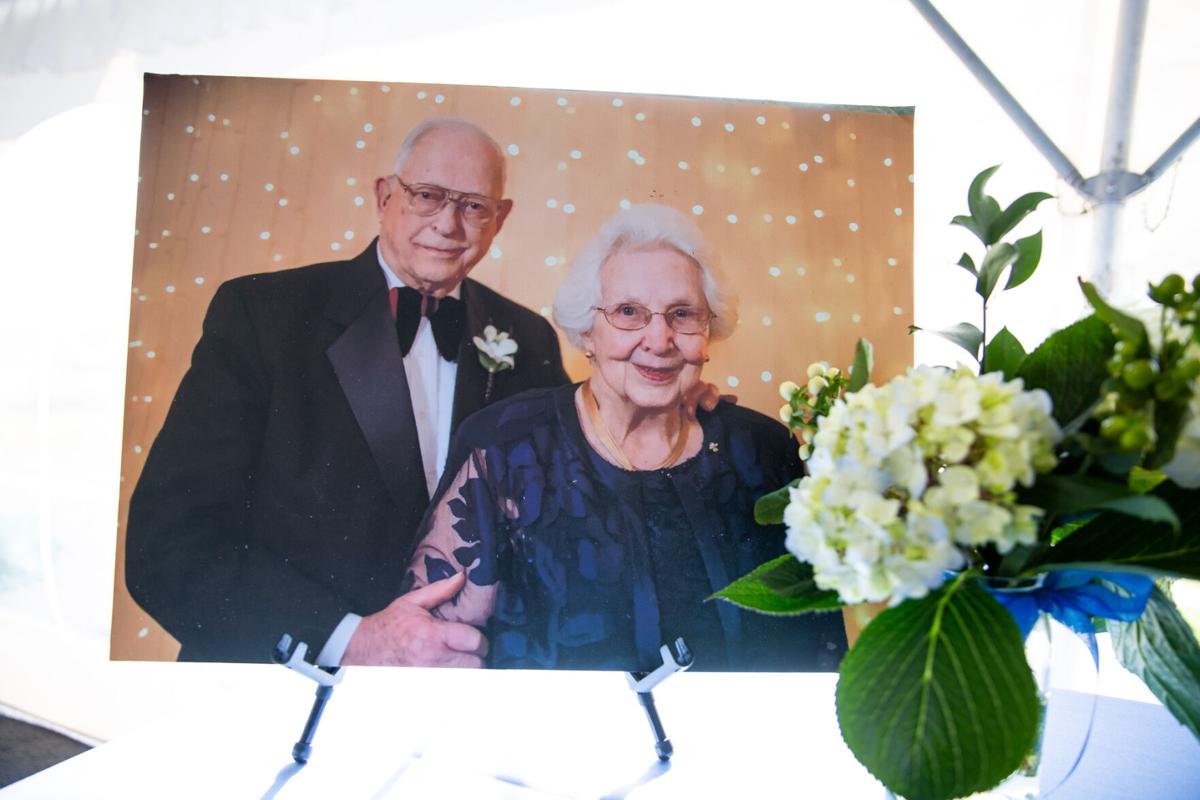 A photo of Tom and Mabel Walker stands on a table at a ceremony honoring the late Mrs. Walker with the Make Every Day Matter Award on Wednesday afternoon at Hospice of Jefferson County in Watertown. Kara Dry/Watertown Daily Times 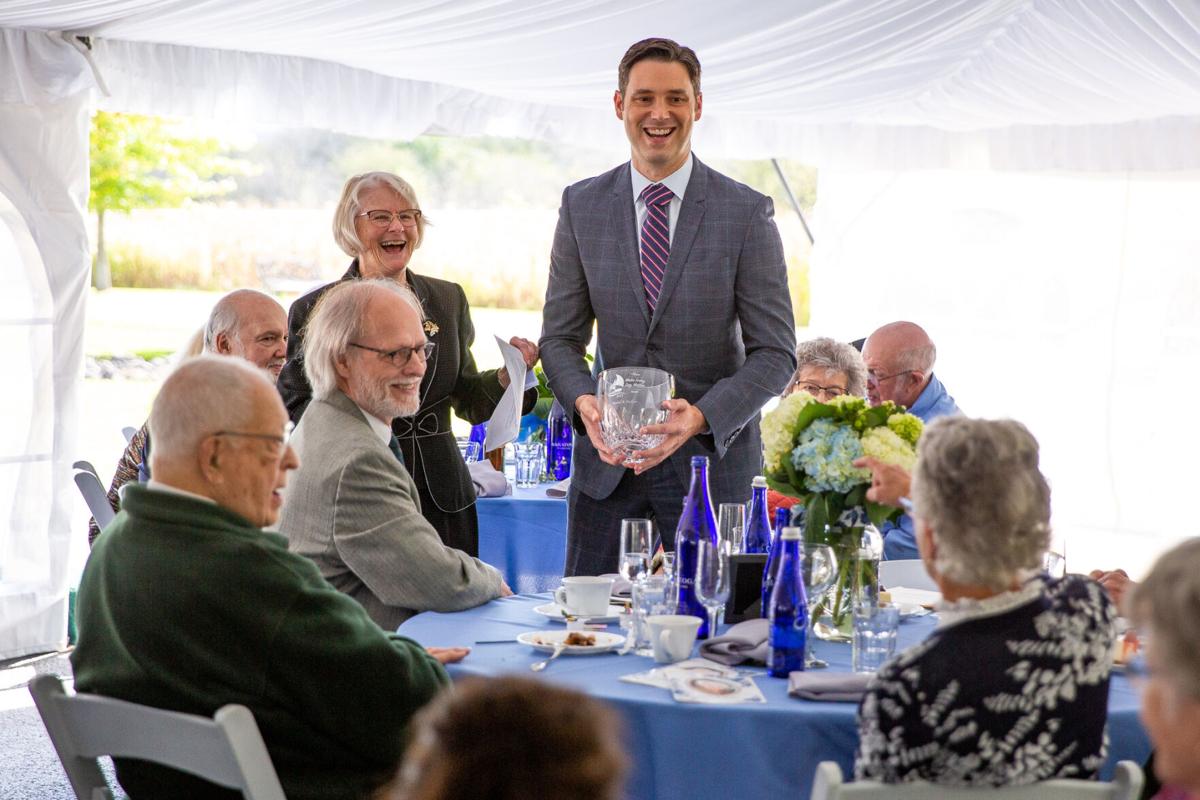 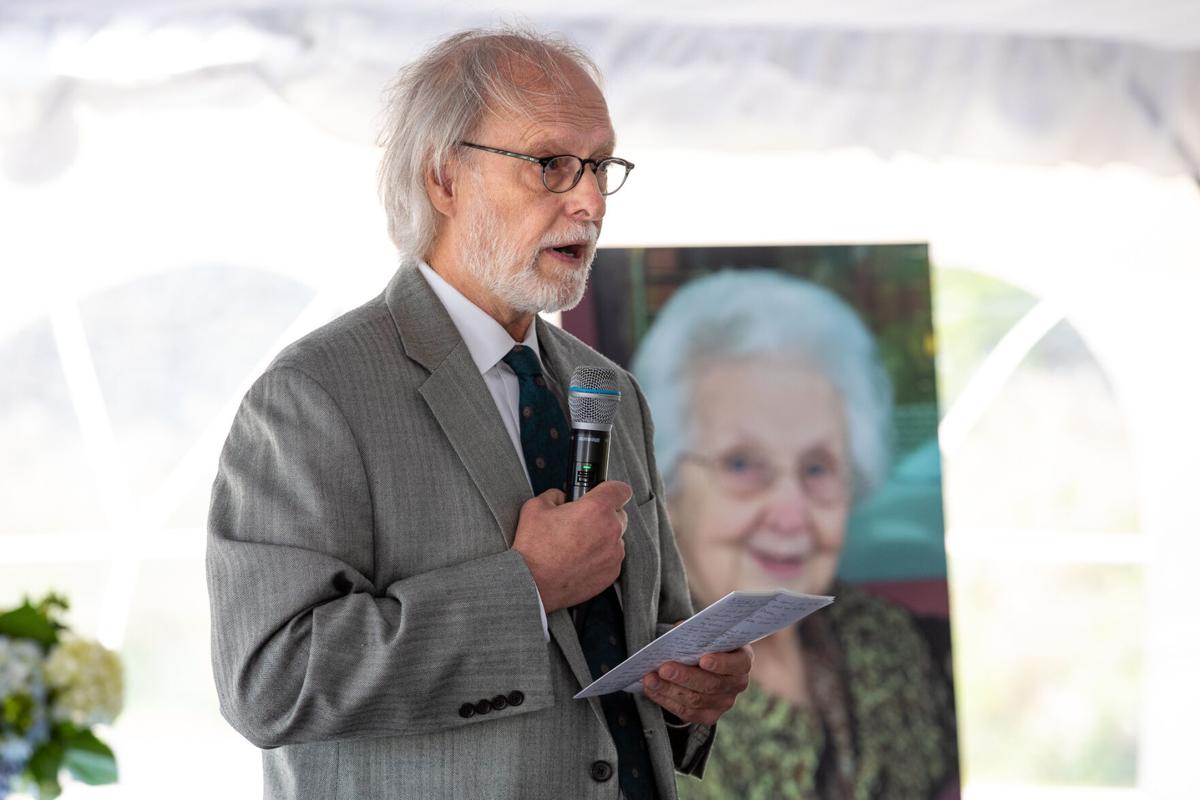 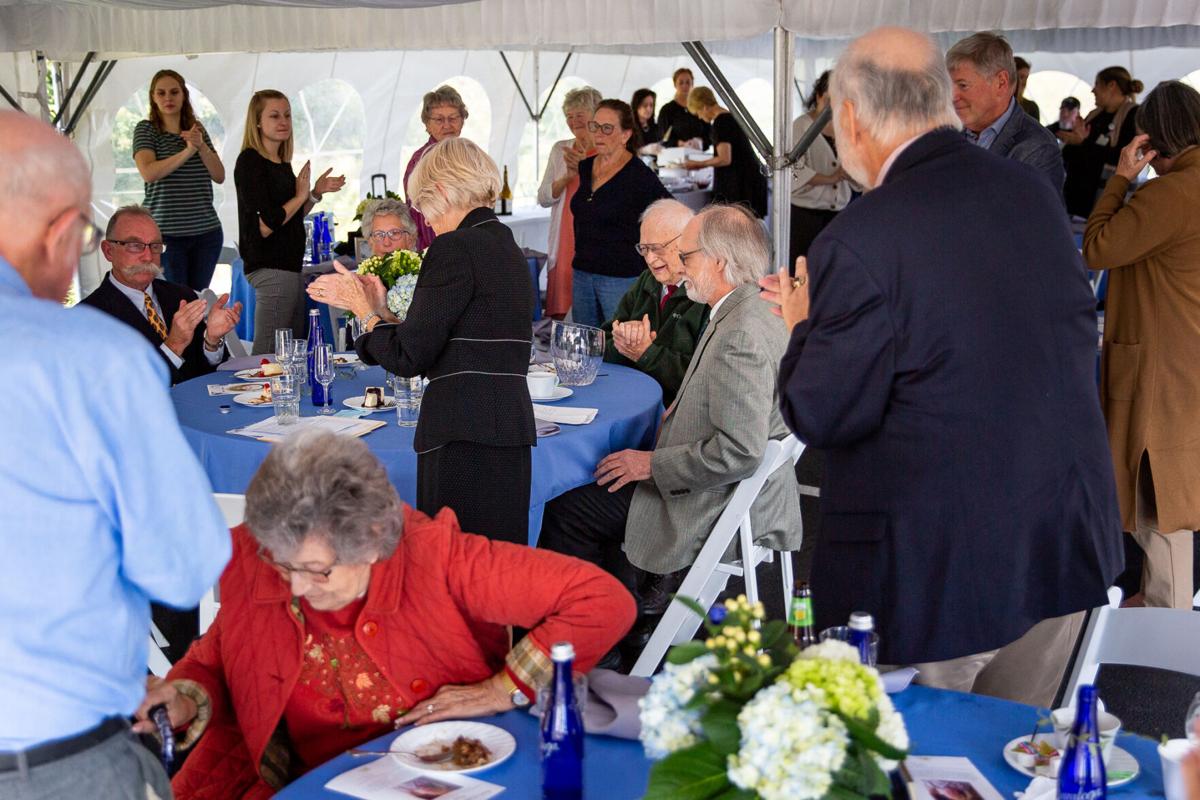 Guests give a standing ovation to the Walker family and the late Mabel Walker at a ceremony honoring her with the Make Every Day Matter Award on Wednesday afternoon at Hospice of Jefferson County in Watertown. Kara Dry/Watertown Daily Times

Alongside their children, Tom Walker sits with the Make Every Day Matter Award honoring his late wife, Mabel Walker, on Wednesday afternoon at Hospice of Jefferson County in Watertown. Kara Dry/Watertown Daily Times

A photo of Tom and Mabel Walker stands on a table at a ceremony honoring the late Mrs. Walker with the Make Every Day Matter Award on Wednesday afternoon at Hospice of Jefferson County in Watertown. Kara Dry/Watertown Daily Times

Guests give a standing ovation to the Walker family and the late Mabel Walker at a ceremony honoring her with the Make Every Day Matter Award on Wednesday afternoon at Hospice of Jefferson County in Watertown. Kara Dry/Watertown Daily Times

WATERTOWN — Inside a large, white tent in the parking lot of Hospice of Jefferson County set up with decorated tables, food, drinks and a band, guests gathered Wednesday afternoon for the awarding of the second annual Make Every Day Matter Award.

Mabel E. Walker, co-founder of Hospice of Jefferson County and well known for her philanthropy in the community, was posthumously honored with the award at the event. The award honors a member of the community, who, through their time, actions, talents and dedication has made significant contributions to Hospice and the community.

Mrs. Walker died at her city home in December at the age of 93, under the care of Hospice. She co-founded Hospice of Jefferson County in 1986, alongside two local doctors.

She and her husband, former Watertown Mayor T. Urling “Tom” Walker, lost their daughter Winifred to cancer in 1971, and their daughter Constance in 1987. Mabel herself persisted for many years after her breast cancer diagnosis and treatment and later died of metastatic cancer. Her son Tom Jr. and daughter Laurel Walker Pike were in attendance Wednesday.

“We recognize Mabel Walker with this Make Every Day Matter Award for her role in founding Hospice in Jefferson County, her lifelong commitment to us, and to her many contributions to Jefferson County,” Hospice CEO Diana K. Woodhouse said. “One of the attributes that guided Mabel’s work in my humble opinion was her nursing background. She clearly understood what patients and families needed and she knew how to get that for them.”

Friends and community leaders remember Mrs. Walker as a paragon of the Watertown community, a philanthropist and an active citizen. With her husband, the two donated significant amounts of their time and money to local nonprofits and other charitable organizations across the north country.

The lunch reception featured remarks from some individuals close with Mrs. Walker, including Mrs. Woodhouse, who recognized people she called “the most recent inductees to the Friends of Mabel Club” — her caregivers from Hospice.

Those caregivers included Andrea Paratore, RN, who was with Mrs. Walker for the last few months of her life. She noted that even in her illness, Mrs. Walker continued to care about Hospice staff, caring for them as they cared for her.

“She would teach us about remedies, history, anything and everything under the sun,” Mrs. Paratore said. “When she wasn’t feeling her best, she was still always focused on us and teaching and educating, very family-centered too. She’ll be remembered as part of our foundation, the structure really of what we are and what we’re going to continue to grow into.”

She remembered Mrs. Walker’s strength and passion, her commitment through the years, and how she had such a presence about her, caring about the little things as well as the big. She said it was an honor to be her nurse.

Local musicians in the band Ferguson, Taylor & Rogers played some of Mrs. Walker’s favorite tunes, including “Under the Boardwalk,” “Through the Years,” “Perhaps Love,” and “When the Saints Go Marching In.” Two of her favorite desserts were also featured: pecan pie, a particular favorite, and the Ives Hill Country Club’s famous cheesecake.

Mrs. Woodhouse recalled Mrs. Walker’s holistic approach to health, noting that she and Mrs. Walker had spent many hours talking about nonconventional approaches to health and healing. She said Mrs. Walker cared about the community, welcomed her ability to make it a better place to live, and that many organizations in Jefferson County exist because of the philanthropy of the Walker family.

When the Make Every Day Matter Award was being developed, those at Hospice were exploring what would represent the award in terms of a gift. Immediately, they came up with a bucket because they talk about bucket lists all the time with Hospice families. Eventually, they ended up with a Waterford crystal ice bucket, this year engraved with the Hospice motto and Mrs. Walker’s name, presented to the Walker family by Jeff Cole, president of the Hospice Foundation Board.

“Mom would be proud today, Hospice was a core and continuous part of her life and legacy, and gave her life meaning and significance really without measure, because it was all about caring and giving,” Tom Walker Jr. said. “In a sense, her experience with Hospice I think was fully rounded. She was a co-founder, a funder, a philanthropist, a participant in many of its events, and finally a patient. This last role is not to be underestimated.”

He went on to say that it’s often hard to really understand how something works until you need it most, until you need it yourself. Mr. Walker Jr. said his family got to experience just how family-centered Hospice is, that the nurses and caregivers work with families in providing care, understanding and training and in some cases visits long enough to feel like they were a part of the extended Walker family.

Mr. and Mrs. Walker were together for 72 years, and contributed greatly to the community during that time. Mr. Walker said his wife was proud of how Hospice grew over the years. He recalled that if there were any complaints or disagreements, no matter how small, she’d be on top of it and make sure everything go straightened out.

“We thought this would be a good place to have it (Hospice) up here because we were experiencing a lot of cancer outcomes of all kinds, and of course in our own family. So, we decided that we ought to start one here,” he said. “One thing she was very determined about was it would be the best service we could give because this is the end of someone’s life.”