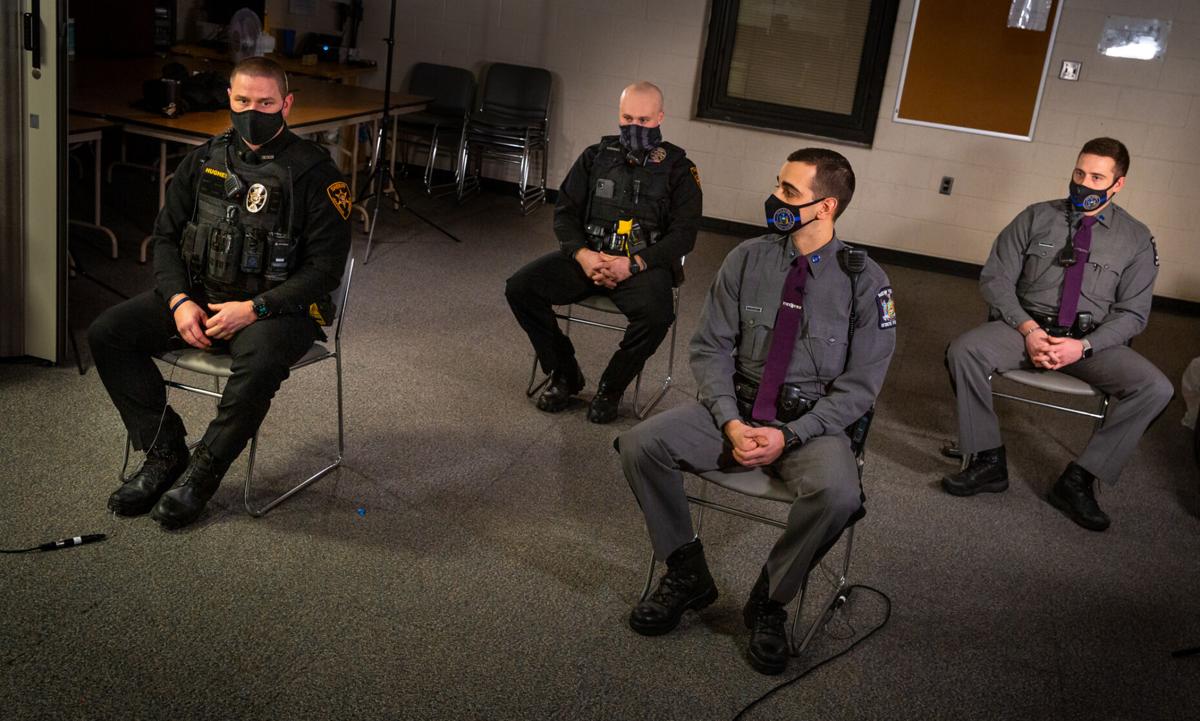 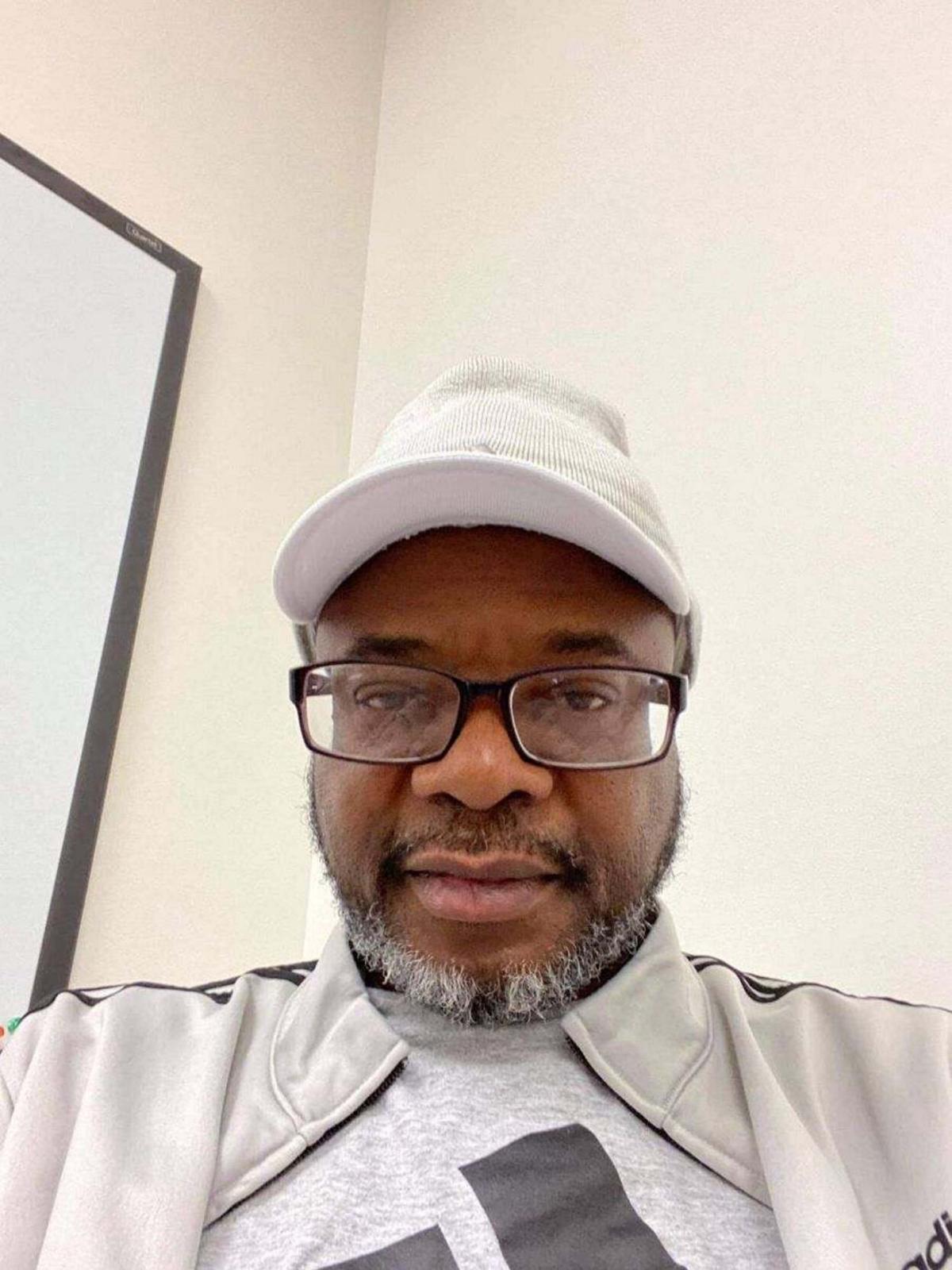 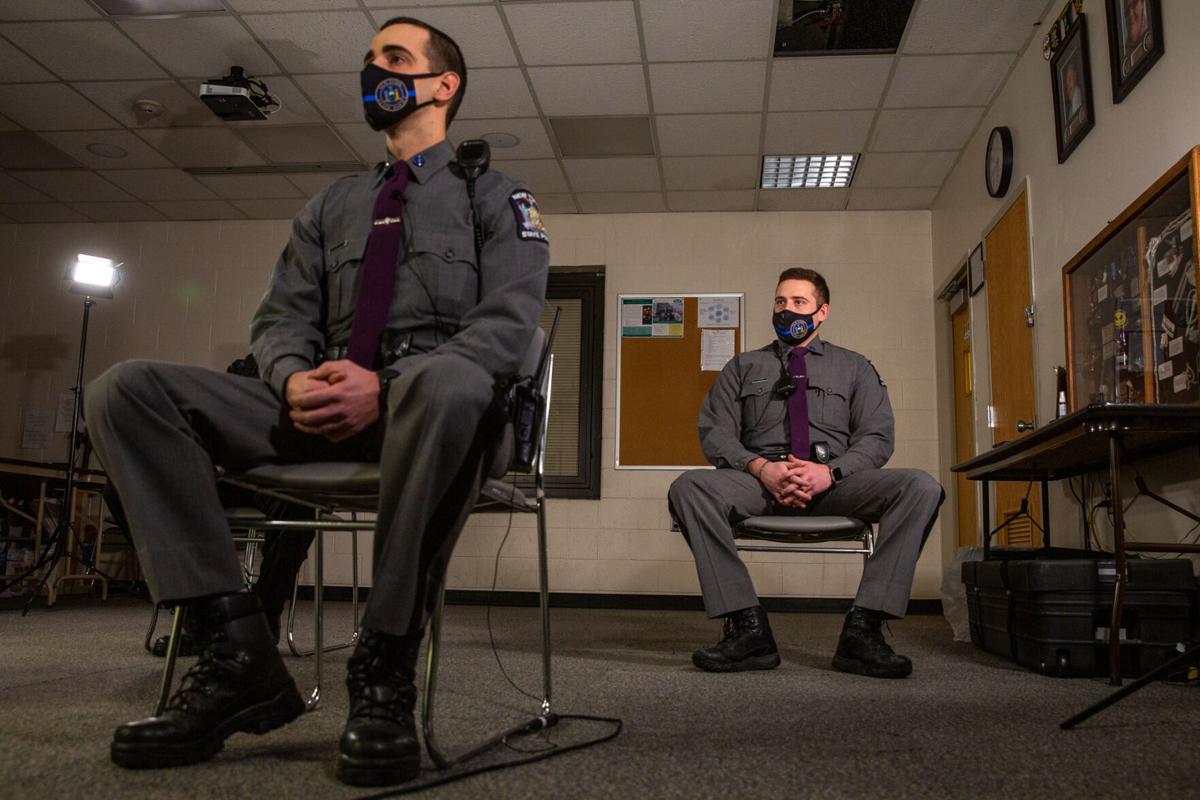 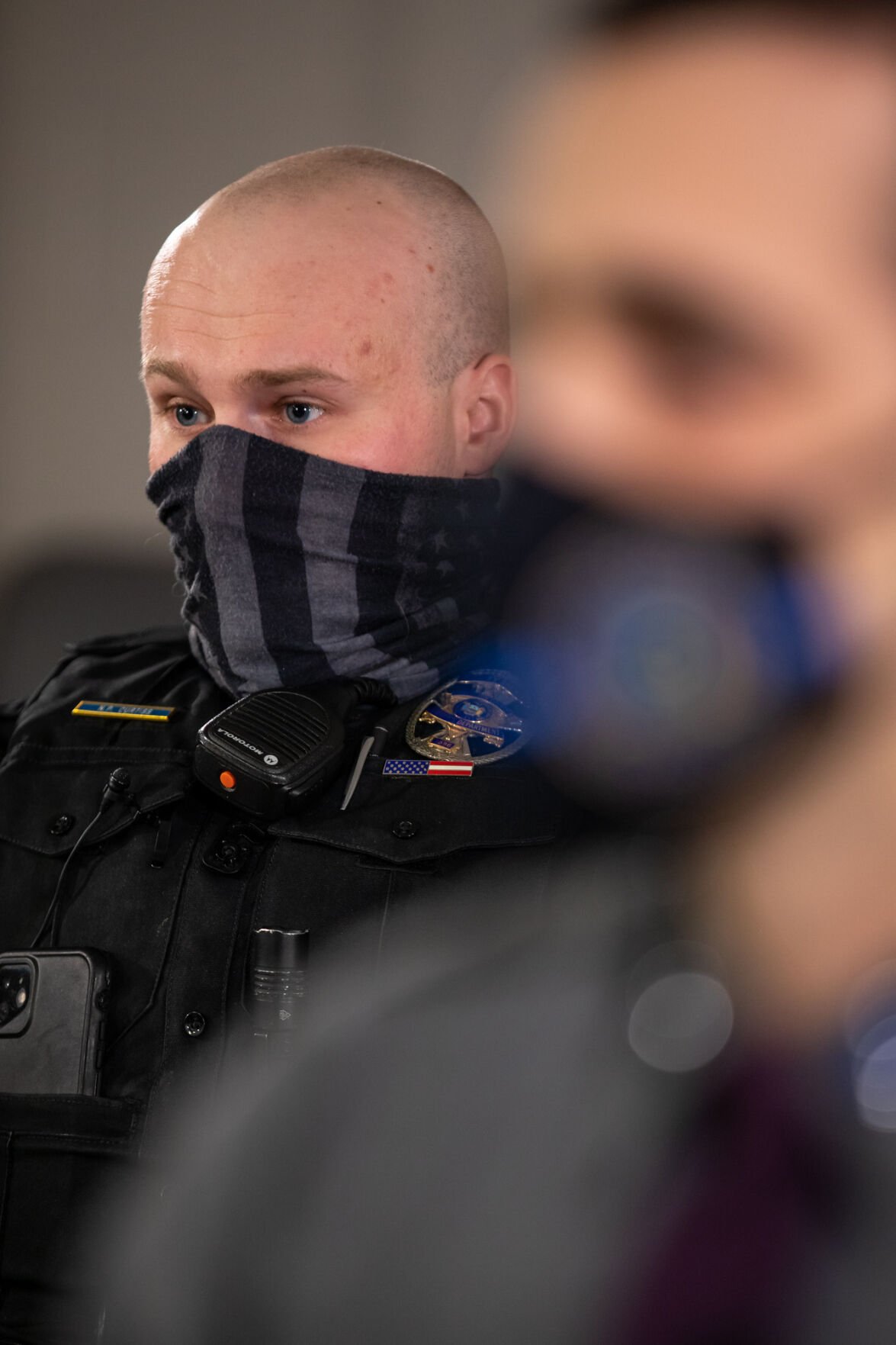 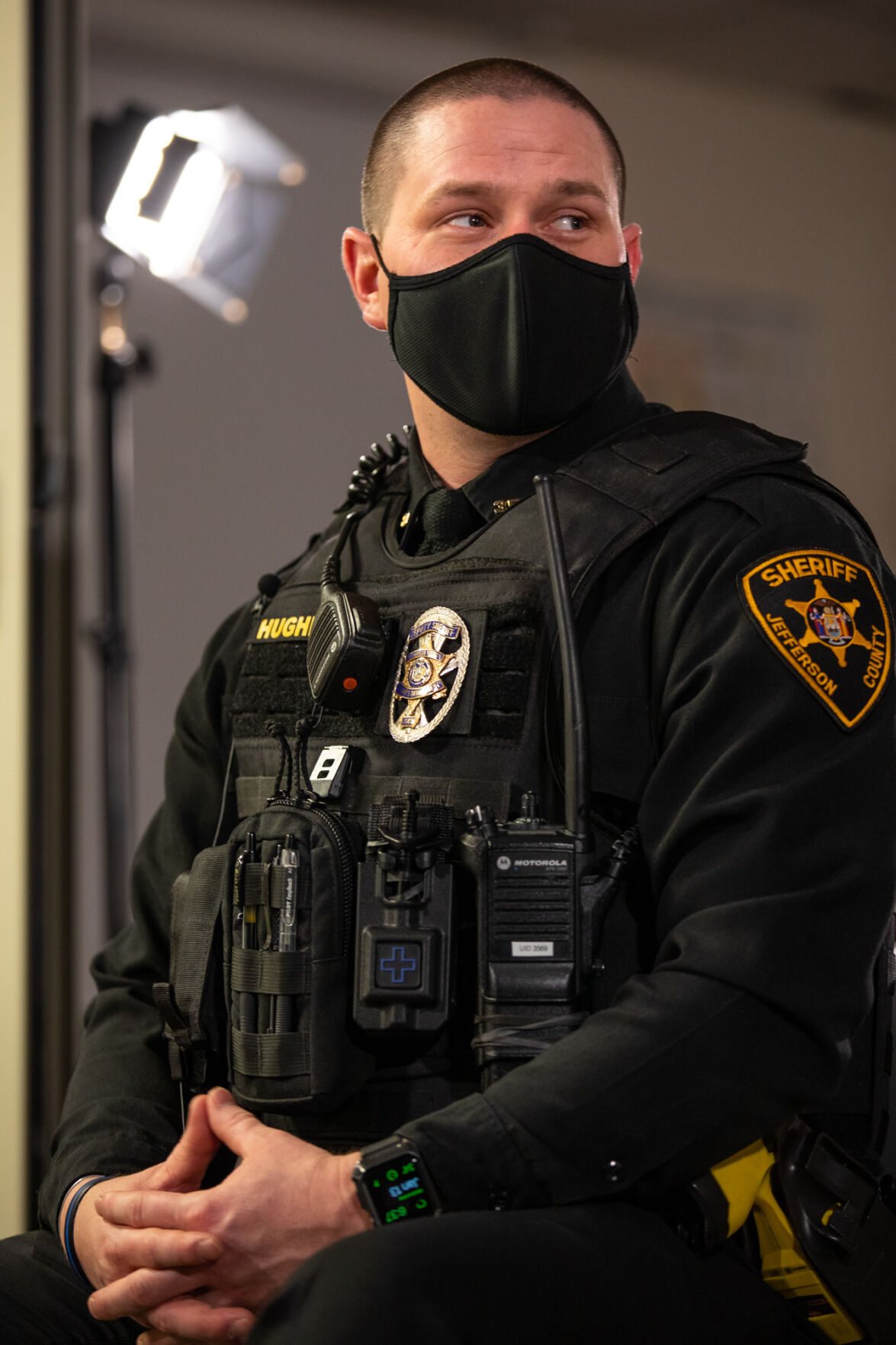 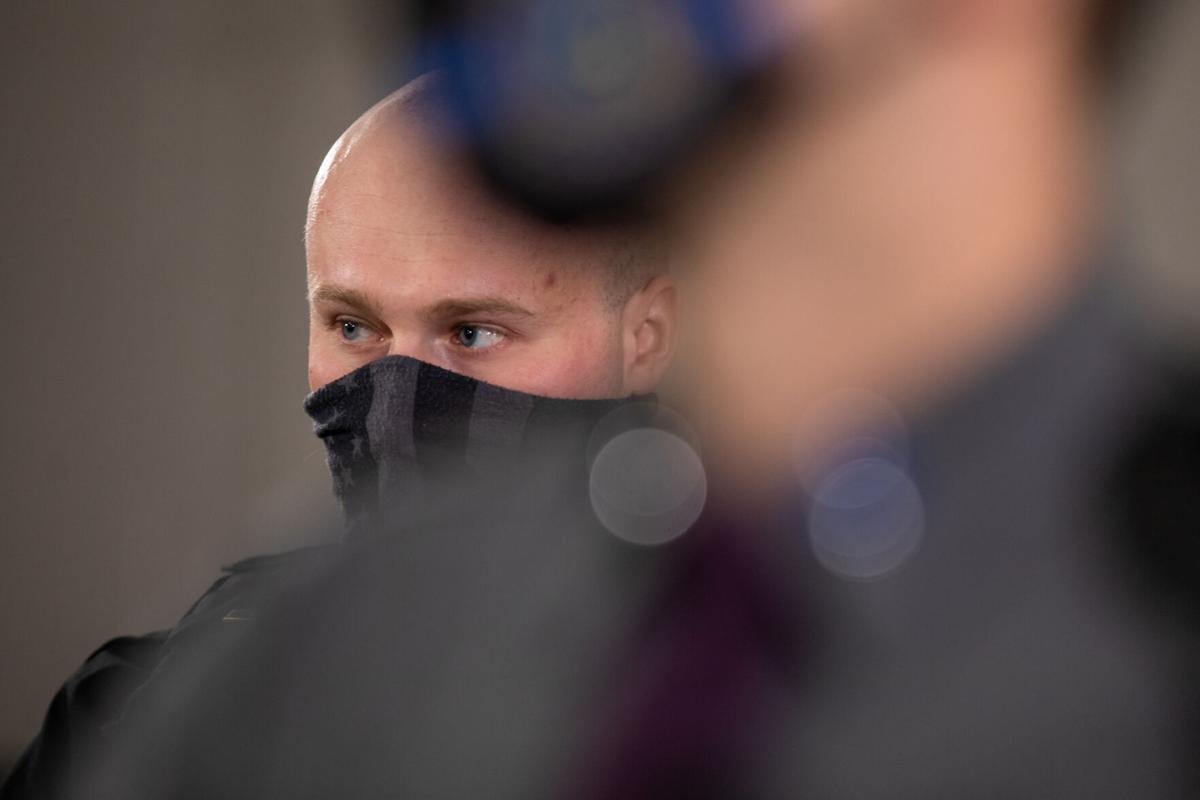 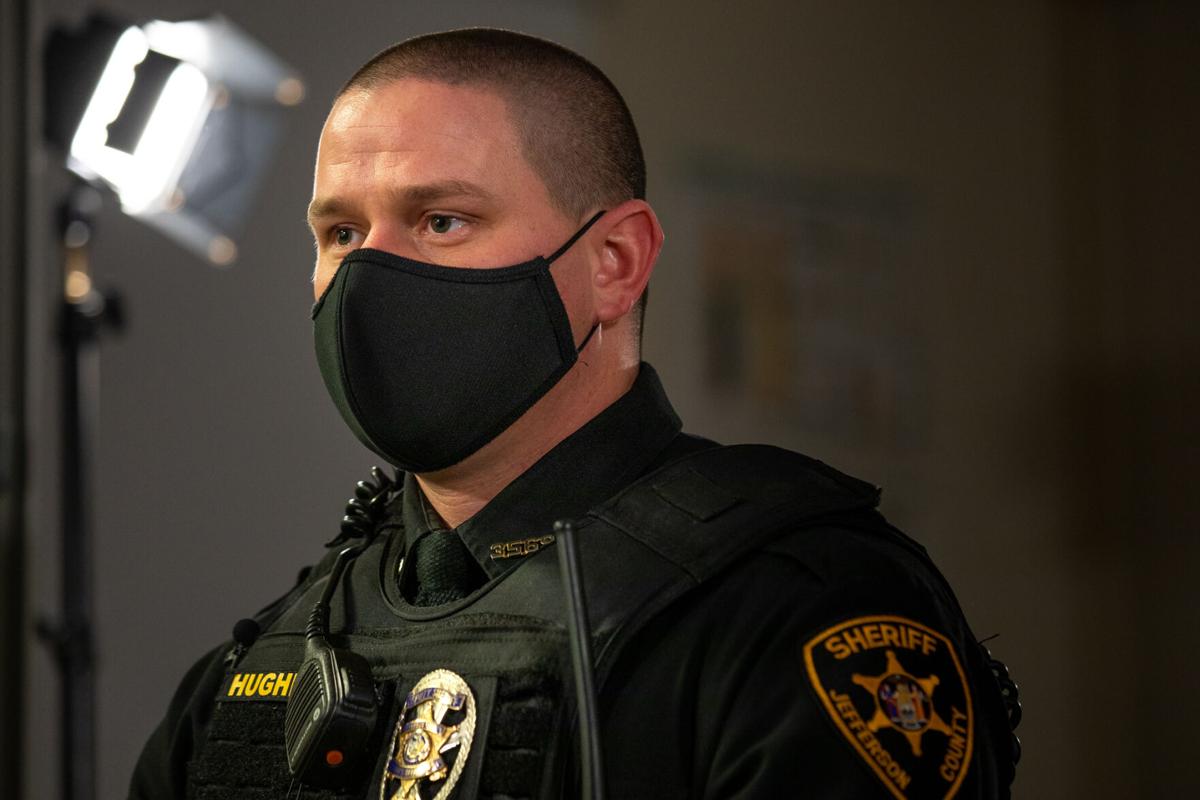 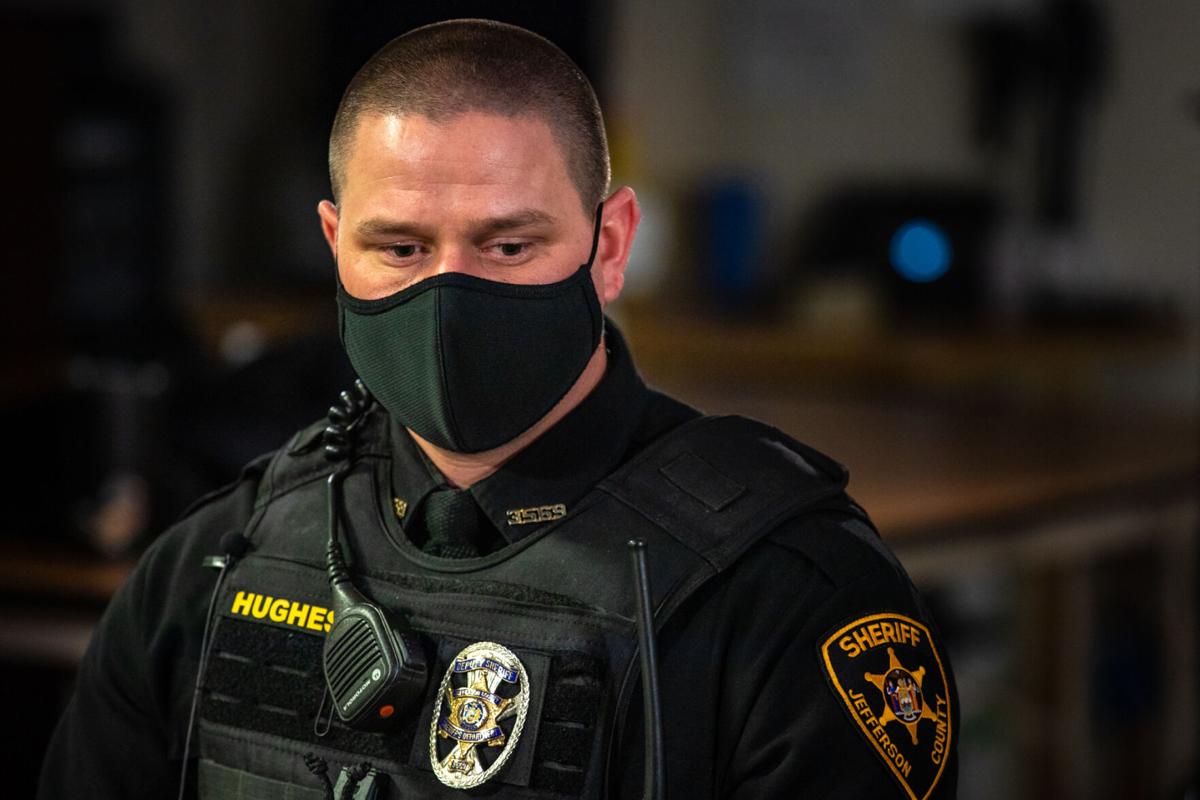 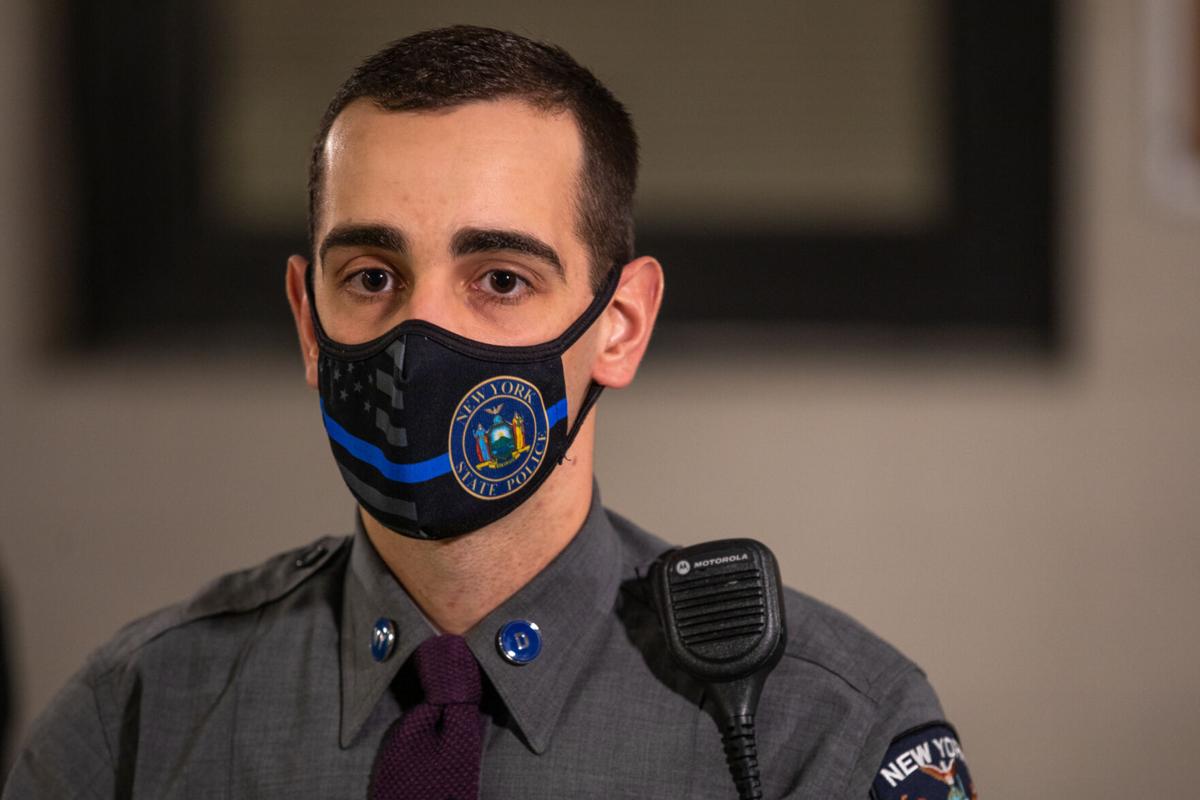 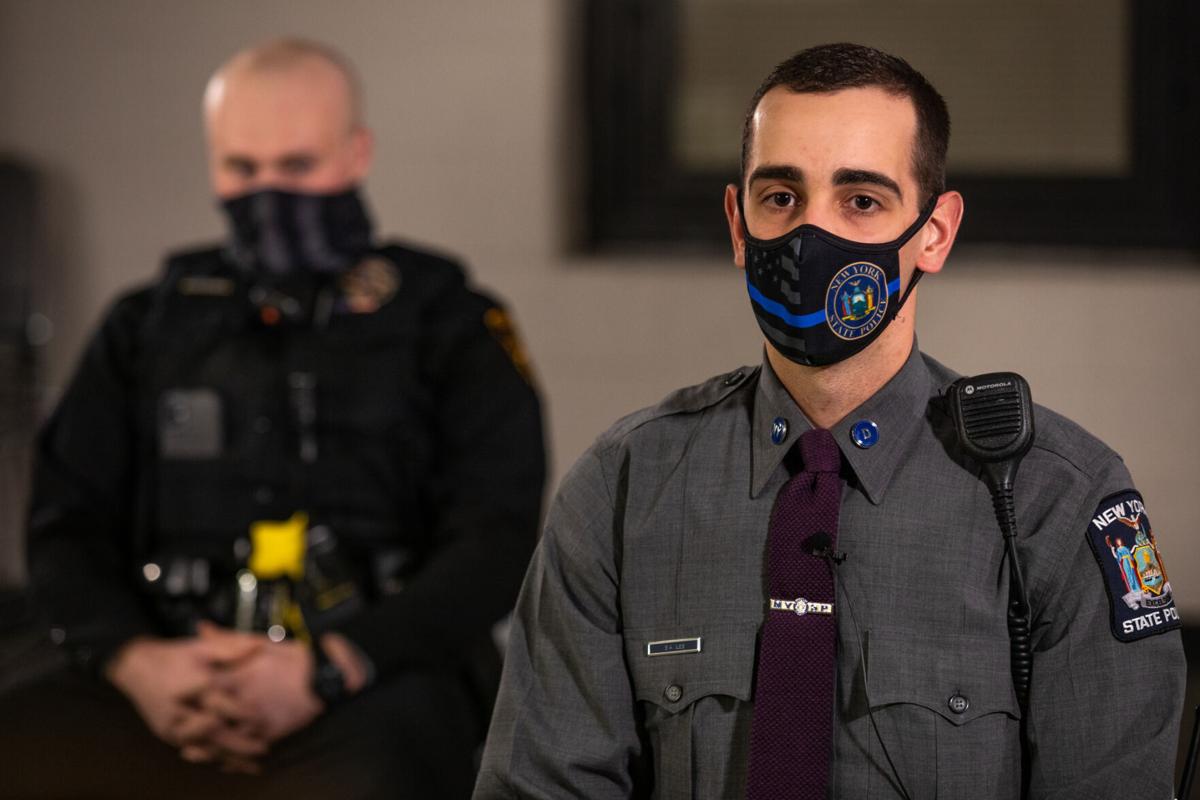 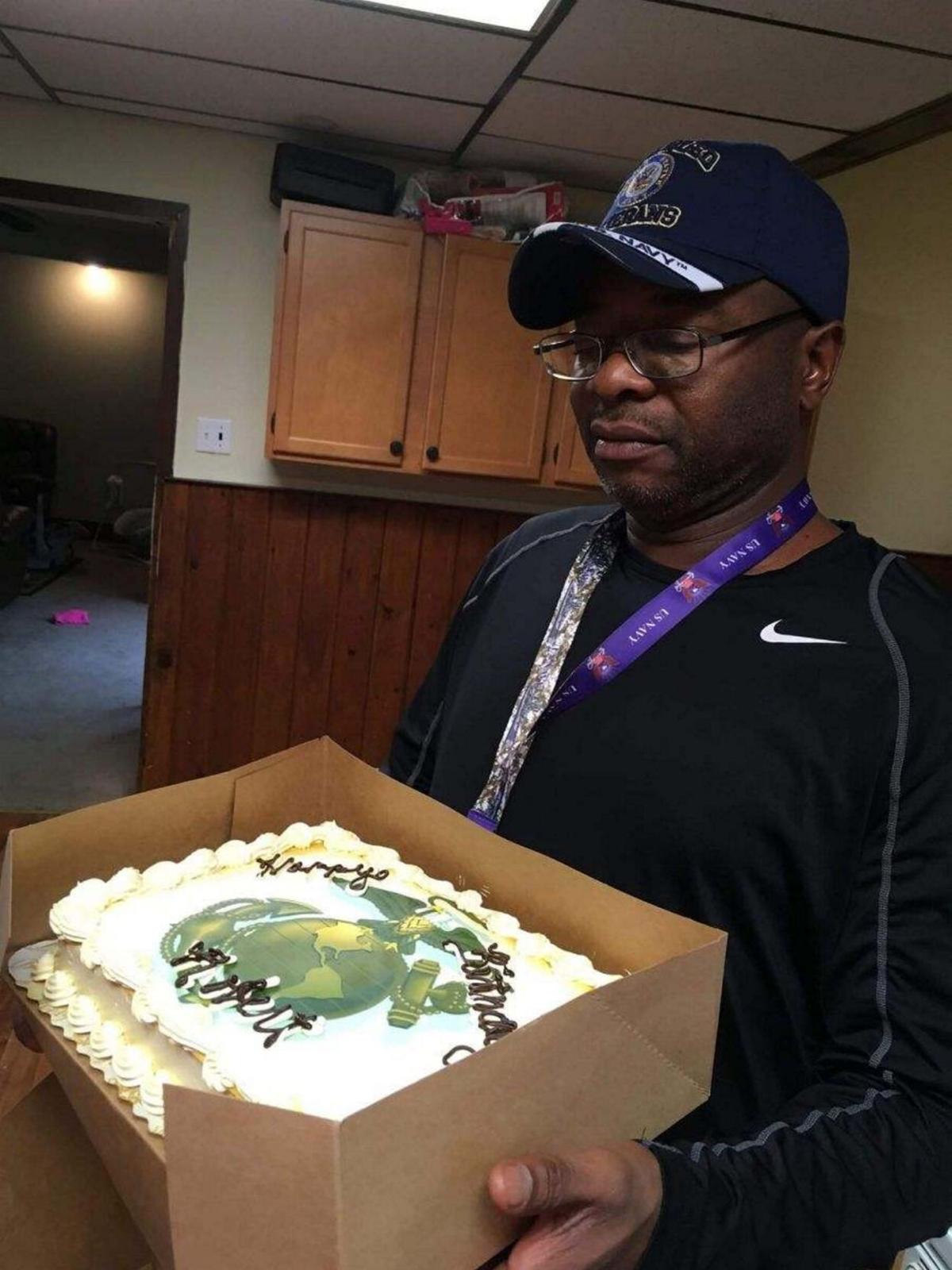 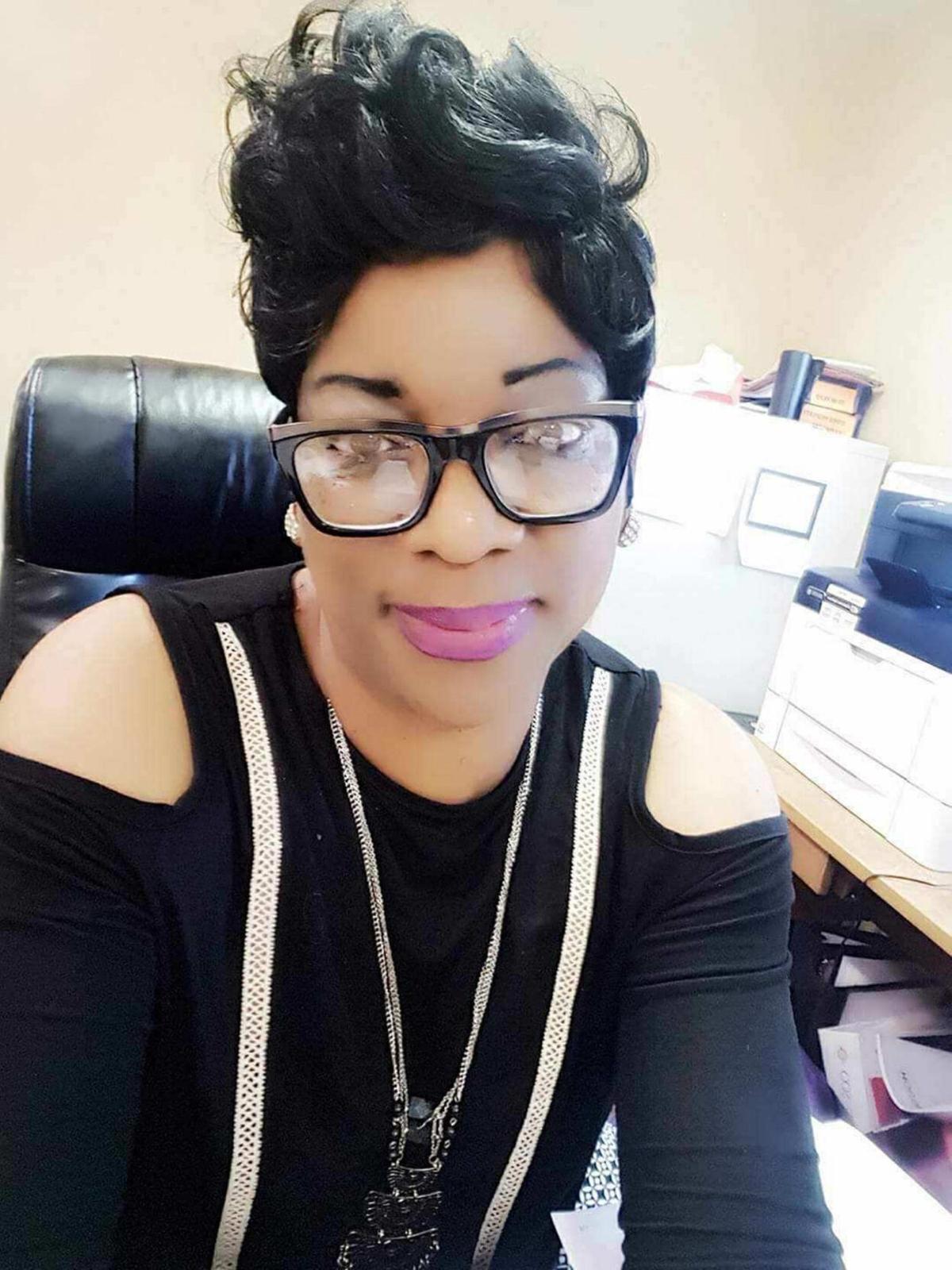 WATERTOWN — The four officers didn’t know there was a fire Monday morning until they unlocked the door and watched smoke pour into the hallway, instinctively leading them to hit the deck and crawl to the man inside.

“For them to risk their lives to go in there and pull him out of that fire — there is no award or not enough thank yous or recognition that could be given for that,” said Tarra S. Murphy, the wife of the man inside.

Mrs. Murphy thought Robert W. Murphy, her husband of 35 years, was dead as she sat in her bedroom Monday, being told he was locked inside a burning building.

It was almost 1 a.m. when Jefferson County dispatch reported a disturbance call at the Relax Inn Motel on Route 11, just outside of the city near Sundance Leisure. The closest to the motel was Deputy Christian D. Hughes, who has been with the county sheriff’s office for more than three years. He responded to the motel and within seconds, three more officers arrived, including Deputy Nick P. Curtiss, Trooper Sean A. Illes and Trooper Joseph R. Fay.

A few witnesses said they could hear something that sounded like cries for help coming from room 112. The four officers said they went to the door and could only hear mumbles coming from the man inside. Deputy Hughes said he, at one point, thought the man inside was having a medical emergency.

The mumbling then stopped and something started to seem off to the officers.

“I never thought in a million years about what we were going to find on the other side of that door,” Deputy Hughes said.

Management at the motel was able to provide keys to the room, and Deputy Hughes asked if every officer was ready before he opened it.

The door swung open and Deputy Hughes said he remembers feeling a rush of air into the room as smoke came flooding out.

The instincts kicked in at that point. There wasn’t much of a process, they said.

“I really wasn’t thinking much,” Trooper Fay said. “I just knew there was somebody in there who needed our help and that we had to get in there to get him out.”

Deputy Hughes hit the floor. Troopers Illes and Fay followed, crawling and using flashlights to avoid as much smoke as they could as they entered the room to find the man.

The officers finally saw a hand coming from the bathroom, which belonged to Mr. Murphy. The officers had to stand up into the smoke to begin the process of pulling him out, which would likely be the result of three of their hospitalizations.

Meanwhile, Deputy Curtiss said he called dispatch for first responders — a move they consider to be critically important — and began evacuating the rest of the building.

The other three, running out of time, were struggling to grab any limb they could of Mr. Murphy’s to drag him out. Then Mr. Curtiss came back.

“We were having a heck of a time getting him out of the bathroom,” Deputy Hughes said. “There was no doubt, at that point, when Deputy Curtiss came in and got his hands on him as well ... 100 percent without a shadow of a doubt there was no way one, two or three of us could have done it. It took all four of us.”

The four said they were inside the burning hotel for nearly five minutes before they pulled Mr. Murphy out.

He was semi-conscious at the time and the officers weren’t necessarily aware that they needed medical attention, too. The adrenaline was rushing and they were ready to continue evacuating the rest of the motel, but other officers would arrive and tell them to take a ride to Samaritan Medical Center for smoke inhalation.

“I’ve been to fires and things like that, but never with the proper equipment or another fireman next to you,” said Deputy Hughes, who is also a volunteer fireman. “This was definitely a new experience and not necessarily one that I would recommend to people.”

Those four officers were colleagues, not necessarily best friends, but those five minutes inside the Relax Inn resulted in them each worrying every second about how the others were doing. Trooper Illes remembers seeing Deputy Hughes in the hospital, which made him feel better. Deputy Hughes went around and checked on the rest of the officers that night.

Four days later, they’re keeping in touch about what happened.

“It’s humbling, but at the same time it was just kind of like an extraordinary set of circumstances and we just happened to be at the right place at the right time,” Deputy Hughes said. “In all honesty, I think that any other police officer — city of Watertown, state, Jefferson County, anyone — in our position would have done the exact same thing in that moment.”

Mr. Murphy was staying in room 112 at the motel for reasons that aren’t exactly clear, his wife said. She lives in Virginia, and he’s now in Watertown, but they stay in contact due in large part to his involvement with their two children.

She knows the motel could be a place for recently incarcerated individuals, or those rehabilitating from drug addiction, but the reason for his stay doesn’t necessarily matter now.

He was unconscious when those officers entered the room and pulled him out. It was after midnight Monday when her son came into her room and told her Mr. Murphy was reportedly on fire.

“I thought it was over for him,” she said. “I thought he was gone.”

A few more news articles came in and she found out about the officers who went inside, and the lengths they went to save her husband.

He would end up being taken to Upstate Medical University in Syracuse with severe burns to his face and smoke inhalation, which placed him on a ventilator and a medically induced coma. But if not for those officers, he could have stayed in that hotel as it burned.

As of Wednesday afternoon, Mr. Murphy took a couple of breaths without the ventilator and was able to communicate with doctors with nods and gestures.

She knows in recent months there has been a debate when it comes to policing. She knows it’s charged when race comes into the conversation.

“I don’t care what color a police officer is,” Mrs. Murphy said. “I love the police. I should have chosen that type of field for myself.”

If she could speak with the officers, she would tell them and their families to stay safe and that they’re heroes to her.

“They never get the recognition that they should get,” she said. “You always hear the bad and never the good. I try to make it a point to let them know whenever someone is going beyond the call of duty.”

"'Hero's" is a term that in the last year has been reserved for front line health care workers and recently capitol police.... Add these officers to the list... let's pray this is an omen for 2021... Unselfish and brave... great teamwork! Prayers for a speedy recovery...