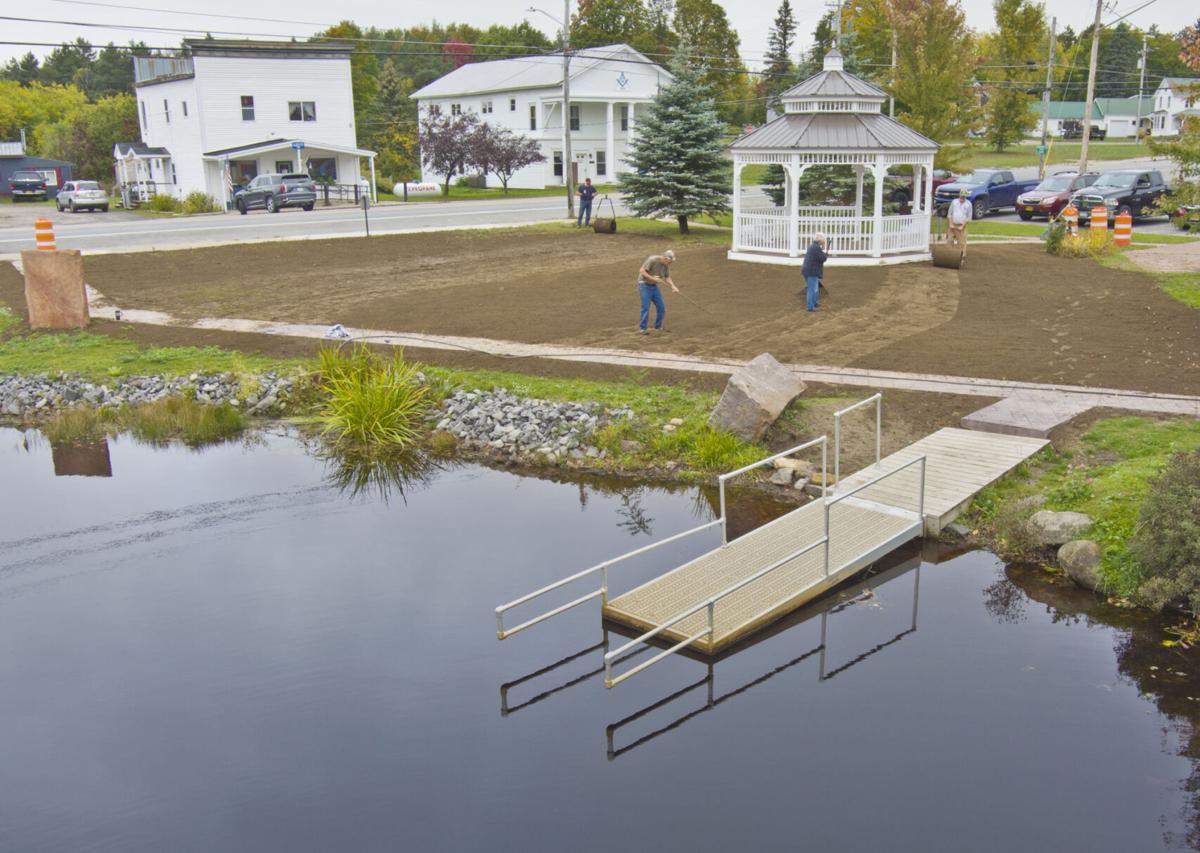 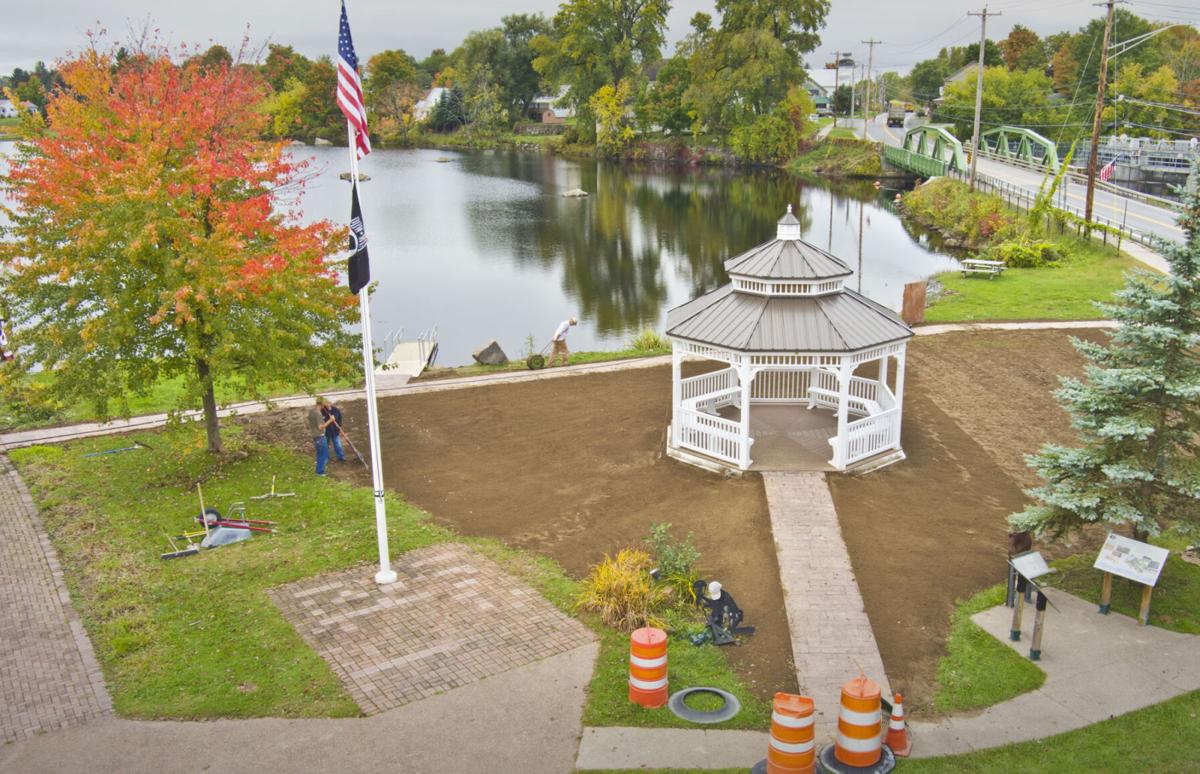 On the shores of the St. Regis River in Parishville, volunteers from left, Joe Snell, Madeline Pennington and Steve Lavigne prepare the grounds around the village’s new gazebo for hydro seeding. The gazebo and surrounding land will be named and dedicated to honor John G.A. and Chloe Ann O’Neil on Saturday. Christopher Lenney/Watertown Daily Times

On the shores of the St. Regis River in Parishville, volunteers from left, Joe Snell, Madeline Pennington and Steve Lavigne prepare the grounds around the village’s new gazebo for hydro seeding. The gazebo and surrounding land will be named and dedicated to honor John G.A. and Chloe Ann O’Neil on Saturday. Christopher Lenney/Watertown Daily Times

PARISHVILLE — A gazebo and surrounding land owned by the town of Parishville will be dedicated at 10 a.m. Saturday in honor of two well-known and respected members of the community, the late John G.A. O’Neil and his wife, the late Chloe Ann O’Neil.

Mr. O’Neil, who died in a Dec. 10, 1992 car accident, was a member of the New York State Assembly from 1981 until his death. He was reelected, but died before the next Legislature convened.

Before entering politics, Mr. O’Neil had been a professor at the Agricultural and Technical College at Canton, now SUNY Canton, and was active at several other colleges in the area. He was also involved in labor issues for more than 20 years.

She also taught for decades in the Parishville-Hopkinton Central School District, volunteered at Canton-Potsdam Hospital, served on the SUNY Canton College Council and College Foundation Board, and was an active community member and civic leader across the north country.

“I was just in high school when it happened. It was a major tragedy for the town of Parishville,” said Parishville Town Councilman Tom Demo, who is spearheading the planning for Saturday’s ceremony. “They really deserve (the ceremony). We want to keep their life story together.”

He said the town had bought property, including a home from a family estate that they tore down. The property includes a flagpole, 9/11 memorial, gazebo, walkway and memorial pavers. Shrubbery will be going in next year, along with three benches for a walkway on the water.

“So there’s a lot of work going on besides what we see now,” Mr. Demo said. “We’re going to beautify that area.”

But, he said, the town wanted to come up with a plan to best use it.

“We were all sitting at one of our meetings and we said, ‘Now what do we do with this?’ Some people said ‘Let’s dedicate it,’” Mr. Demo said.

That’s when the idea to dedicate it to Mr. and Mrs. O’Neil came up, and they got permission from Beth Ann (O’Neil) Rice and John A. Stephen O’Neil, the O’Neils’ children.

“I first heard about (the memorial) from an article that was written after my mother’s death. The town supervisor, Rod Votra, was being interviewed and said the community would be doing a special memorial in the future,” Ms. Rice said. “At a later time, Tom Demo, who is spearheading the project, reached out to me to begin discussing and planning O’Neil Memorial Park, including my input from the very beginning of stages.”

Mr. Demo said they started with the planning process in 2020, but then COVID-19 hit.

“It kind of got pushed back a little bit, which was OK,” he said.

Among those who will be at Saturday’s ceremony are members of the O’Neil family. It will be a time of reflection for Ms. Rice.

“I think I feel their presence and know that they are appreciative and humbled that the town of Parishville has honored their memory in such a grandiose way, as is our family,” she said. “It truly takes a village to have something like this come together. The stories of all the lives they touched and the good they accomplished will be forever remembered.”

“In saying that, I know they would also be thinking they no more deserved this honor than anyone else,” Ms. Rice added. “They were humble people and never expected any accolades for what came naturally to them, which was to teach, serve, help those in need and keep the north country strong and its voice heard. We will be hoping many will come to this scenic park to make their own memories and reflect overlooking the water they loved so much.”

She looks back lovingly on the impact her parents made on her life.

“My parents were old school and I loved that about them (most of the time). They taught me so many lessons on being a good person; seeing everyone as an equal, respect, working hard, but appreciating the small things in life; making mistakes, but doing better and learning from them; and faith should be instilled. You need to believe there is something more out there to get you through the hard times, because they will happen,” she said. “I guess what I’m saying is they set me up to be successful in life and taught me all the tools to do that. In turn, I have tried to pass them on to my children through them.”

Ms. Rice said her parents were there for the good and the bad.

“My dad was my hero and my mom my rock, and my children’s hero. She hand made their Halloween costumes, favorite food dishes, and went to countless events and sporting events. They will tell you she was their ‘Tell it like it is Mom O.’ And Daddy O got to spend just short of a year with my oldest daughter, but brought so much joy to him. I am grateful that part of his life was fulfilled before he passed,” Ms. Rice said. “We have our memories to get us through and try to live by the lessons and examples they have left behind, but (they) have left enormous shoes to fill.”