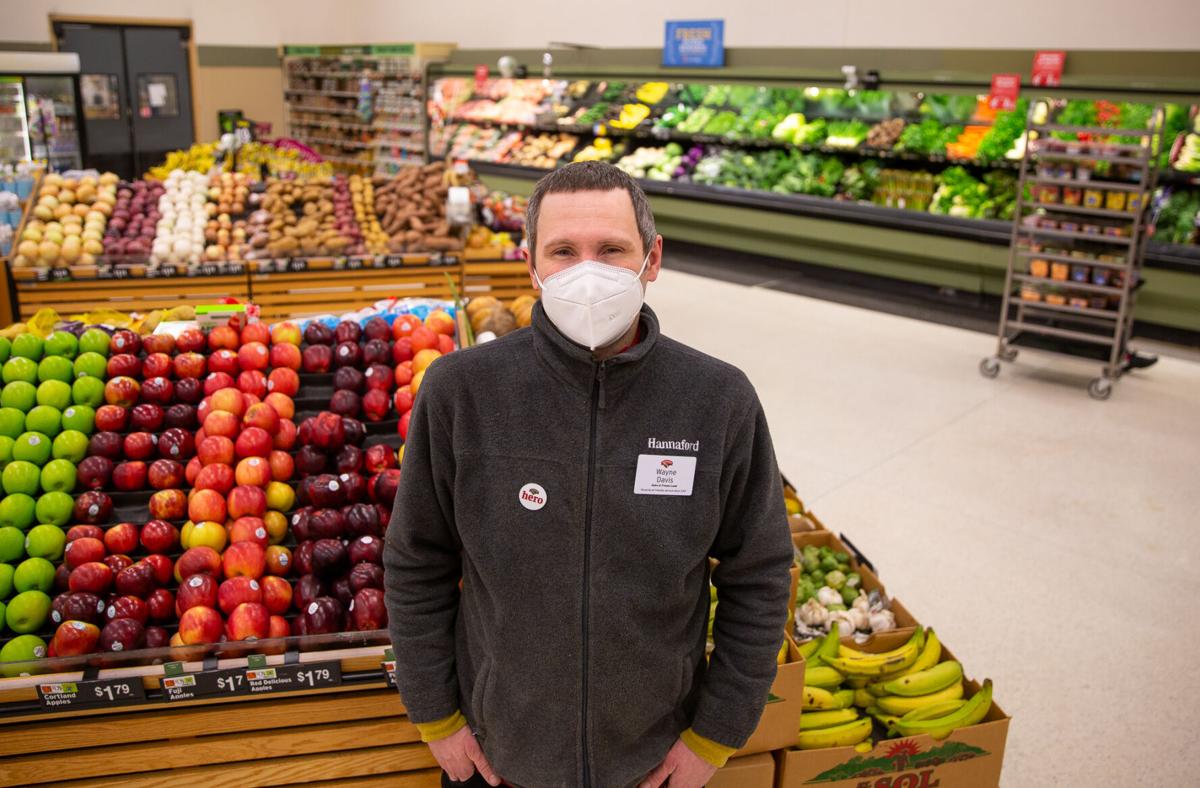 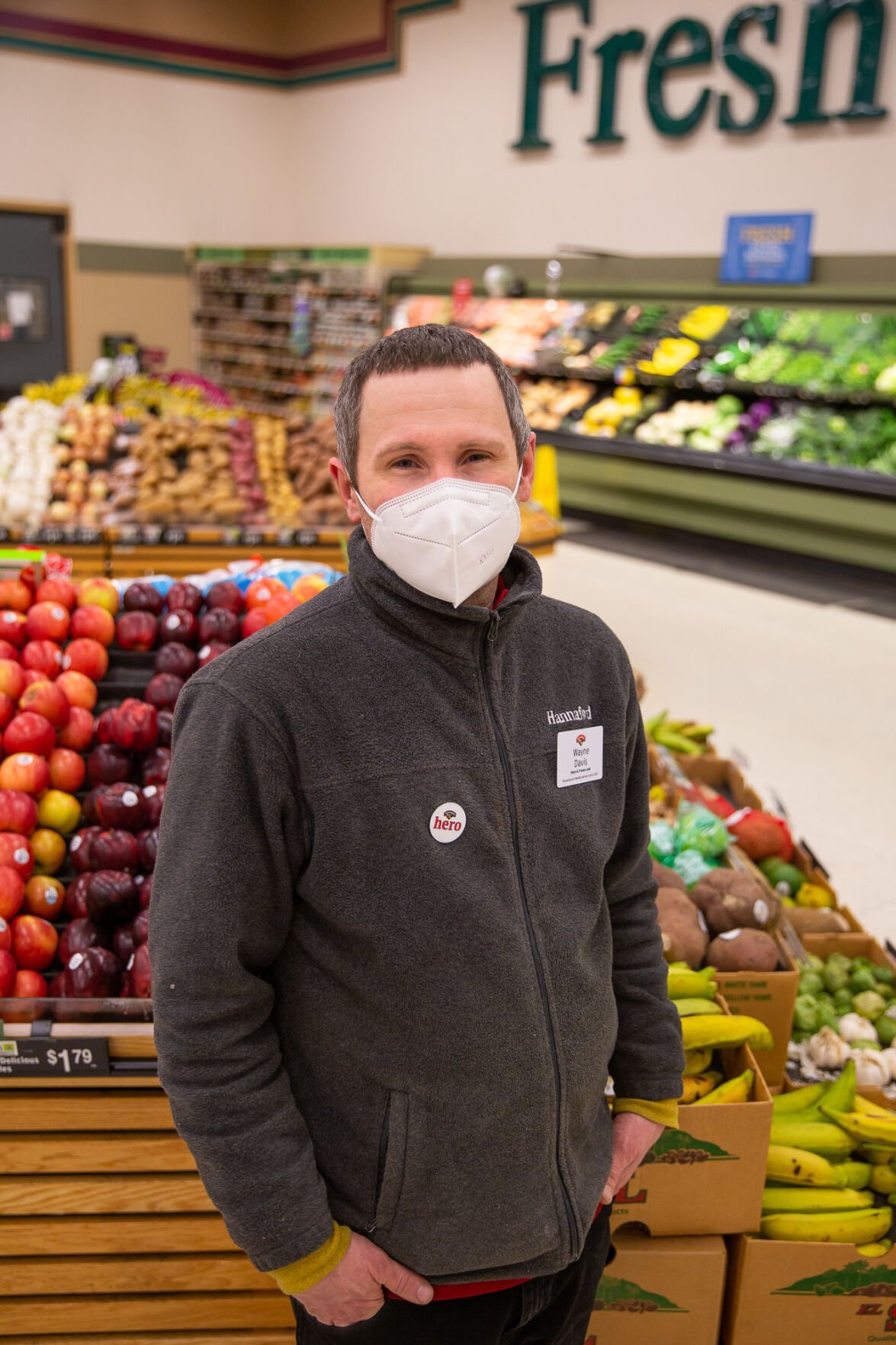 Essential worker Wayne N. Davis of Watertown’s Hannaford Supermarket on Arsenal Street, poses in the produce section. “Even times like this, at a time of scare and fear, I try to take it head on with the best of the day,” he said. Kara Dry/Watertown Daily Times

Essential worker Wayne N. Davis of Watertown’s Hannaford Supermarket on Arsenal Street, poses in the produce section. “Even times like this, at a time of scare and fear, I try to take it head on with the best of the day,” he said. Kara Dry/Watertown Daily Times

WATERTOWN — In the produce department at Hannaford Supermarket on Arsenal Street, there’s an essential worker who rises for the 4 a.m. shift but who could moonlight as a pandemic philosopher.

Wayne N. Davis may stack strawberries and bundle broccoli as part of his daily chores, but he is one worker, deemed essential, who along with putting produce in place, puts other things in perspective — right where we need them.

“It definitely helps when we get the customers in and they start talking and telling us about their day,” said Mr. Davis, who will mark his 20th anniversary with Watertown’s Hannaford in August. “Some days, I have customers come in and it’s not very calm. They’re a little bit scared or they’re a little bit upset about the latest news they’ve heard on TV about the pandemic. Sometimes, I just have to take action and remind them, ‘Hey — we got up this morning, but we’re still on our feet and we’re still moving forward to the next best day.’ We just take it day by day, and make sure each step is safe.”

Supermarket workers have had no option of working from home and have continued to show up at work after COVID-19 lockdown orders arrived in the spring of 2020. They allowed the rest of us to keep stocked, and at times overstocked, with everything from soup to nuts.

“When I first got the grasp of it, I was at work,” he said. “During that timeline, it was more just words and everything when I first heard about it. But I watched it grow rapidly as far as concerns and the emergency of it.”

Safety rules were created at Hannaford and other stores, such as keeping 6 feet apart, regular disinfecting of check-out areas and other surfaces, distributing masks and aisle lane markers for direction of walking.

“They even offered gloves to us as well if we felt the need for those,” Mr. Davis said. “I felt at that point, this was an urgent thing, to see that how we’re definitely around people all the time.”

But Mr. Davis felt secure with the company’s communication about the virus he was receiving.

“Our management team would come down to us first thing in the morning, and myself being a 4 a.m. shift, every day I was one of the first ones to learn of the new rules of the day,” he said. “The rules were changing daily, honestly. The urgency was changing daily.”

When the lockdown began, Mr. Davis noticed the reluctancy of some customers to wear masks — possibly exposing himself and others to the virus.

“Now, it’s very rare to see somebody in the store without one,” said Mr. Davis, a fact which helped to instill even more confidence in him about the store’s overall safety situation.

“Overall, it made me feel a little safer, knowing we were going to take action toward something that is for the public, for the people,” he said. “It’s not just the associates. I’ve worked with the same customers for a good many years, grown little relations with them. As they come in, I develop conversations and get their input on how they’re doing; what exactly they feel is safe within the store as well.”

“It just shows they actually care,” Mr. Davis said. “You see so many other businesses around just making the transaction. It’s just collecting the pay check or collecting the money or selling the item, with not a lot of stuff being done other than wearing a mask, and that’s because it’s mandated. They’re not going outside the box, trying to create the best environment for their people. It just doesn’t seem that way for me. When I go to Hannaford, it’s almost like a home rather than a business. They make it safe, comfortable and the best way somebody can be inside a store.”

Mr. Davis, who earned a high school equivalency degree in 1999, lives with his girlfriend outside the city of Watertown, near Brownville.

Being an essential worker may carry greater risks for such individuals during the pandemic, but Mr. Davis, with his attitude, is taking it in stride.

“I’m more of a positive person, kind of optimistic for the most part,” he said. “Even times like this, at a time of scare and fear, I try to take it head on with the best of the day. Each day, when I go into work, I put on my mask and start the day, I always keep reminding myself, ‘This is for the customers coming in. They need to eat and are thankful of our work.’ It helps me keep a positive head, to see them being able to fill their carts, and just to fulfill their day as far as eating and everything.”

He recalled the times of product hoarding and shortages of last year — from flour to toilet paper.

“That was a task, just to keep customers calm and make them realize we were going to get another load tomorrow and hopefully, ‘We can get it to you’ and take phone numbers to give people calls in case they still needed it. It’s actions like that. It’s a lot of communicating to ensure you work as a team; talk to the management team and talk to the person working with you in your department. That way, they know what we can get for them and what we can’t get for them on a daily basis. It makes my day a little easier knowing I helped those people out.”

Mr. Davis has seen less tension among customers now that vaccines are rolling out.

“Last year, people were coming in and some people looked scared,” he said. “They looked like they were in fear. I honestly think, their scaredness was actually making them not as healthy as they could be. They would come with black circles under their eyes, be exhausted and nervous. They’d just be a little shaky and not be able to handle themselves. It wasn’t from having anything wrong as far as health-wise. It was just stress itself causing anxiety for them.”

Mr. Davis and the customers he greets may not be able to share friendly smiles, but he said he has seen some positives with the mask mandate.

“The difference I noticed is that it develops direct eye contact with a lot of people,” he said. “Some people, you don’t even recognize with whatever kind of mask they’re wearing. It may cover up their entire face or their neck and some people are wearing them up to their eyes. I found myself just automatically looking into peoples’ eyes more. It’s almost like direct eye contact, or you’re not going to understand where this person is coming from.”

And that sort of connection is a quality we could always use, Mr. Davis said.

“It shouldn’t have been something new, but if we can carry it out, communicate and work as a team like that all the time, it would probably make a better environment all together, no matter where you are.”