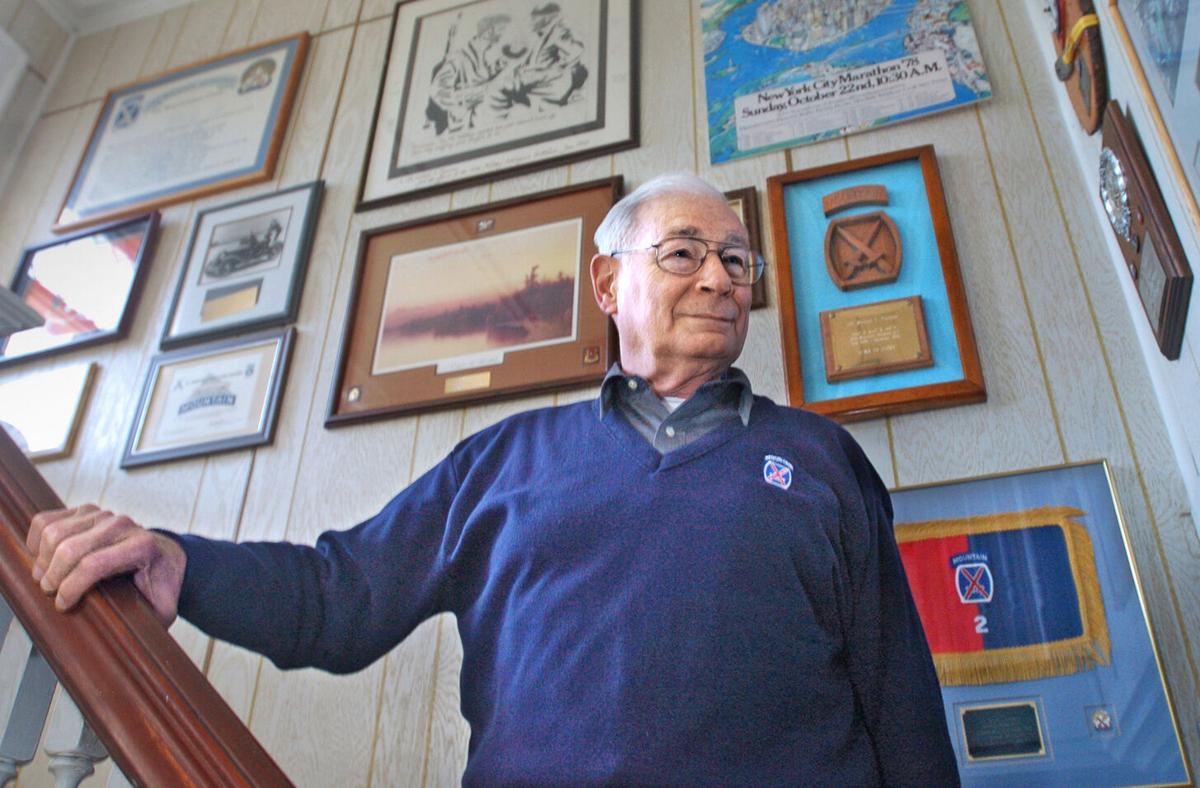 Now-retired Col. Michael T. Plummer stands in the stairway of his Watertown home with some of his military memorabilia in 2019. Watertown Daily Times 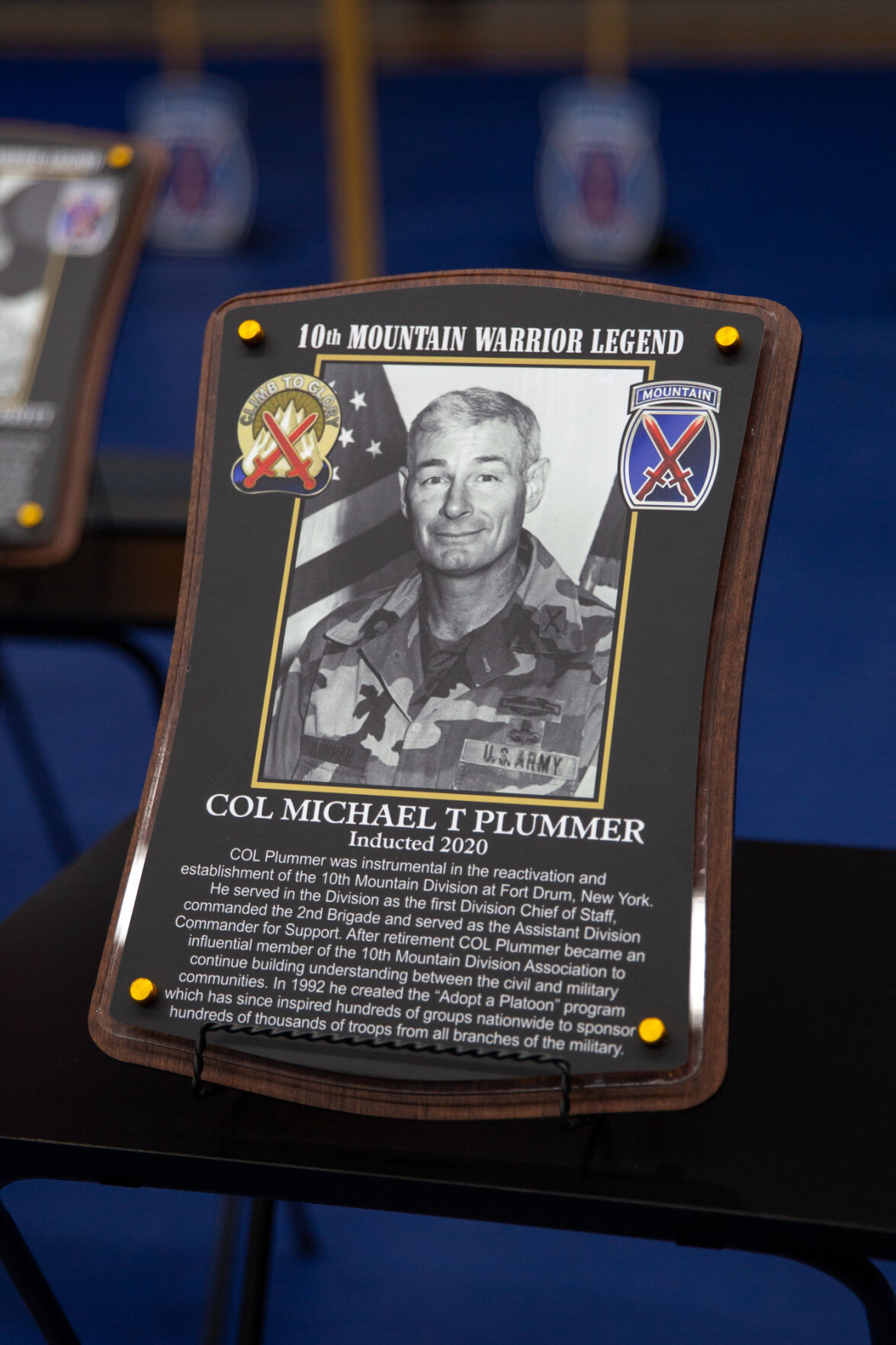 Now-retired Col. Michael T. Plummer was honored along with others in September 2020 during the Warrior Legends Hall of Fame Ceremony at Fort Drum. Kara Dry/Watertown Daily Times

Now-retired Col. Michael T. Plummer stands in the stairway of his Watertown home with some of his military memorabilia in 2019. Watertown Daily Times

Now-retired Col. Michael T. Plummer was honored along with others in September 2020 during the Warrior Legends Hall of Fame Ceremony at Fort Drum. Kara Dry/Watertown Daily Times

FORT DRUM — Retired Col. Michael T. Plummer recalls the days when Fort Drum was staffed by just a dozen people and its mission was a military training center for the National Guard.

Since those days, Col. Plummer has had a major hand in Fort Drum’s growth, expansion and development, playing a key role in bringing the 10th Mountain Division back to the north country in 1985.

Now after all these decades, Col. Plummer, 83, is leaving his most-beloved Fort Drum and the place he’s called home. On Thursday, he and his family are relocating to Alabama to be closer to one of his sons.

“I’m going to miss the north country,” he said.

His friends both on post and in the community are thanking Col. Plummer for everything he did for the north country and are saying their goodbyes.

The retired colonel has been a mentor to another retired soldier, Joseph E. McLaughlin, who’s known him for nearly 20 years. His friend taught him to be a better soldier, father, husband and community member.

Col. Plummer served at Fort Drum from late 1984 until mid-1985, when he assumed command of the division’s 2nd Brigade at Fort Benning, Ga. A few years later, he returned to Fort Drum to serve as assistant division commander and retired here in 1991.

Col. Plummer, the division’s first chief of staff, also was among an overwhelming amount of support from north country residents who had advocated for the newly reactivated 10th Mountain Division to be stationed in Northern New York.

But perhaps no one had more of an impact in convincing the U.S. Army to move to a light infantry division than Col. Plummer. In those days, the Army was an Army of tanks and large artillery, not the current military branch that consists of troops always prepared to go on its next mission.

In 1984, he was the author of the “Light Infantry Division White Paper,” which laid out how the Army could be transformed to a military force that was ready to rapidly deploy with its specially trained soldiers.

The 10th Mountain Division has roots going back before World War II. The newly constituted division immediately began to build upon its already brave and glorious history during World War II when it fought through the mountains of Italy to help bring the war to an end.

The division was deactivated soon after the war. Later, it had a new home at Fort Benning before it was dismantled once more in 1958.

“The saying around here is: it took a plumber, carpenter and a surgeon to make Fort Drum happen,” he said, referring to the last names of three West Point grads.

In 1985, Gen. John A. Wickham, the Army’s chief of staff, decided to move forward with the concept and told them to “prepare to do it,” Col. Plummer recalled.

The reality of the undertaking set in when Congress OK’d $1.2 billion to “build a city” basically from scratch, he said, adding only wooden buildings used during World War II existed there then. It took lots of planning out. Making sure that housing was in place for soldiers was a priority. The move was finalized in 1988.

But Col. Plummer downplays his role, saying that someone else would have done the work of the three West Point grads if it was assigned to them. The three men were assigned a mission and they accomplished it, he said.

Since then, Fort Drum has become a key national security asset for the country and the most deployed division in the Army, with more than 30,000 soldiers and family members calling Northern New York their home. The base has a civilian workforce of more than 3,900 civilians and provides a $1.4 billion boost to the local economy.

10th Mountain Division soldiers have served many deployments in Iraq and Afghanistan, plus others in Somalia and Kosovo and hurricane relief in Haiti.

While he was instrumental in the revitalization of the 10th Mountain Division, that work just tells part of his story, said friend Mary A. Corriveau, who’s known him for more than 30 years.

His efforts expand well into the community, where he did so much more, she said.

They’ve worked on so many projects together to help soldiers and their families, things that made the community better and efforts to ensure a special bond was forged between Fort Drum and the north country, she recalled.

“His work is significant,” she said.

He created the yellow ribbon campaign and the Adopt-a-Platoon program — which became a national program after starting here — to engage the community to support deployed soldiers. The Soldier 101 program allows community residents to learn about what it means to be a soldier and what their lives are like.

It was his idea for the North Country Honors the Mountain monument in Watertown’s Thompson Park, which commemorates the history of the 10th Mountain Division.

He’s served as leader or was the founding member of such organizations as the National Association of the 10th Mountain Division; the Scholarship and Wounded Warrior Funds; Purple Heart Scholarship Fund; Fort Drum Regional Liaison Organization; the Friends of Thompson Park; and others.

In 2009, he was named Israel A. Shapiro Citizenship Award winner for all of his efforts involving Fort Drum and the community.

But what is he most proud of?

His work on forming the partnership between Fort Drum and the community was so important to him, he said.

Col. Plummer, a San Francisco, Calif., native, moved a lot when he was young because his father was in the military. He served in the Army for more than 30 years.

Serving in the 101st and 82 Air Borne divisions, he was commissioned a second lieutenant and earned a bachelor’s degree in general engineering from the U.S. Military Academy at West Point in 1960 before serving in Vietnam.

Now he and his family are leaving the north country. He and his wife Miriam have two special needs children who are 58 and 61 years old. The move will ensure them that they’ll be cared for as Col. Plummer and his wife approach the twilight years of their lives.

His next mission will focus solely on his family.