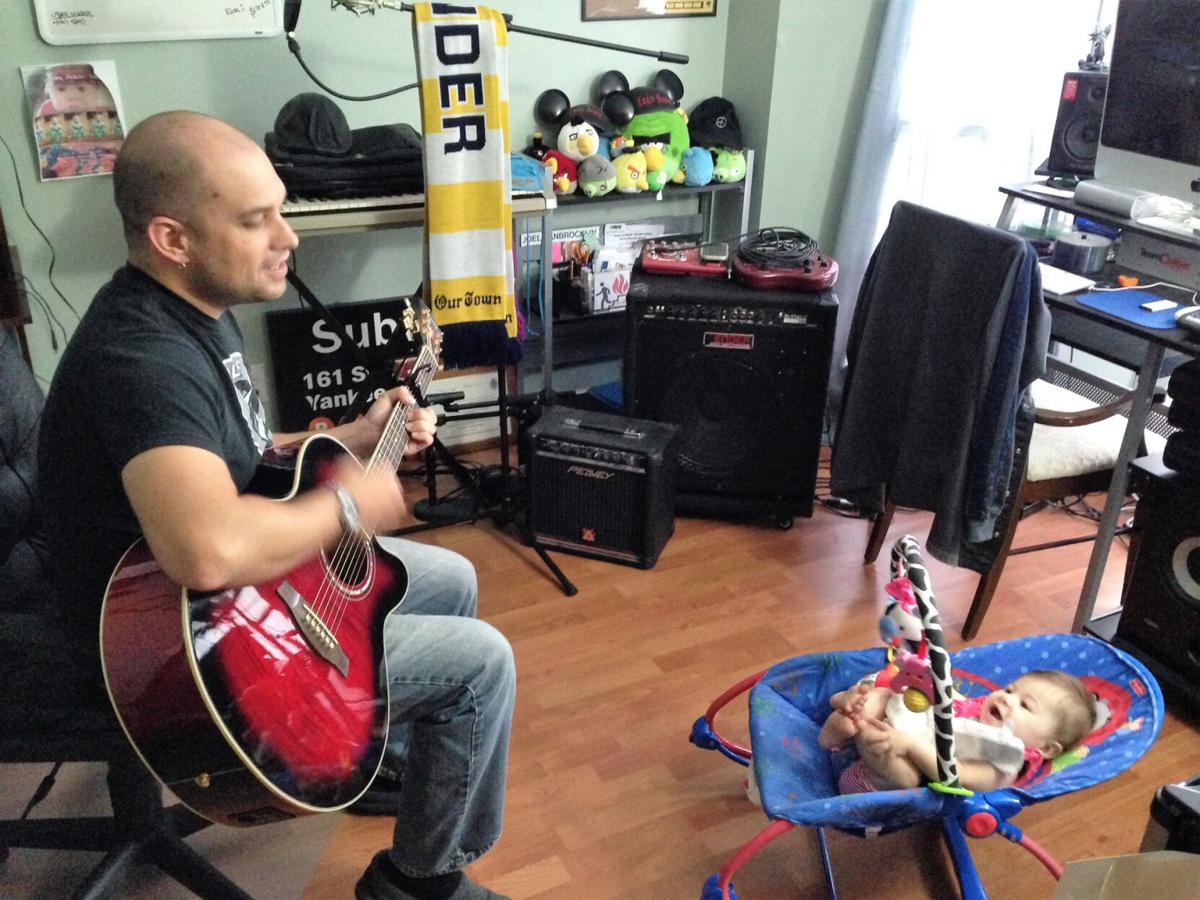 Ender Bowen, aka Joel D. VanBrocklin, sings to his daughter in 2014, around the time he was inspired to create a new album. Photo courtesy Emily Steele 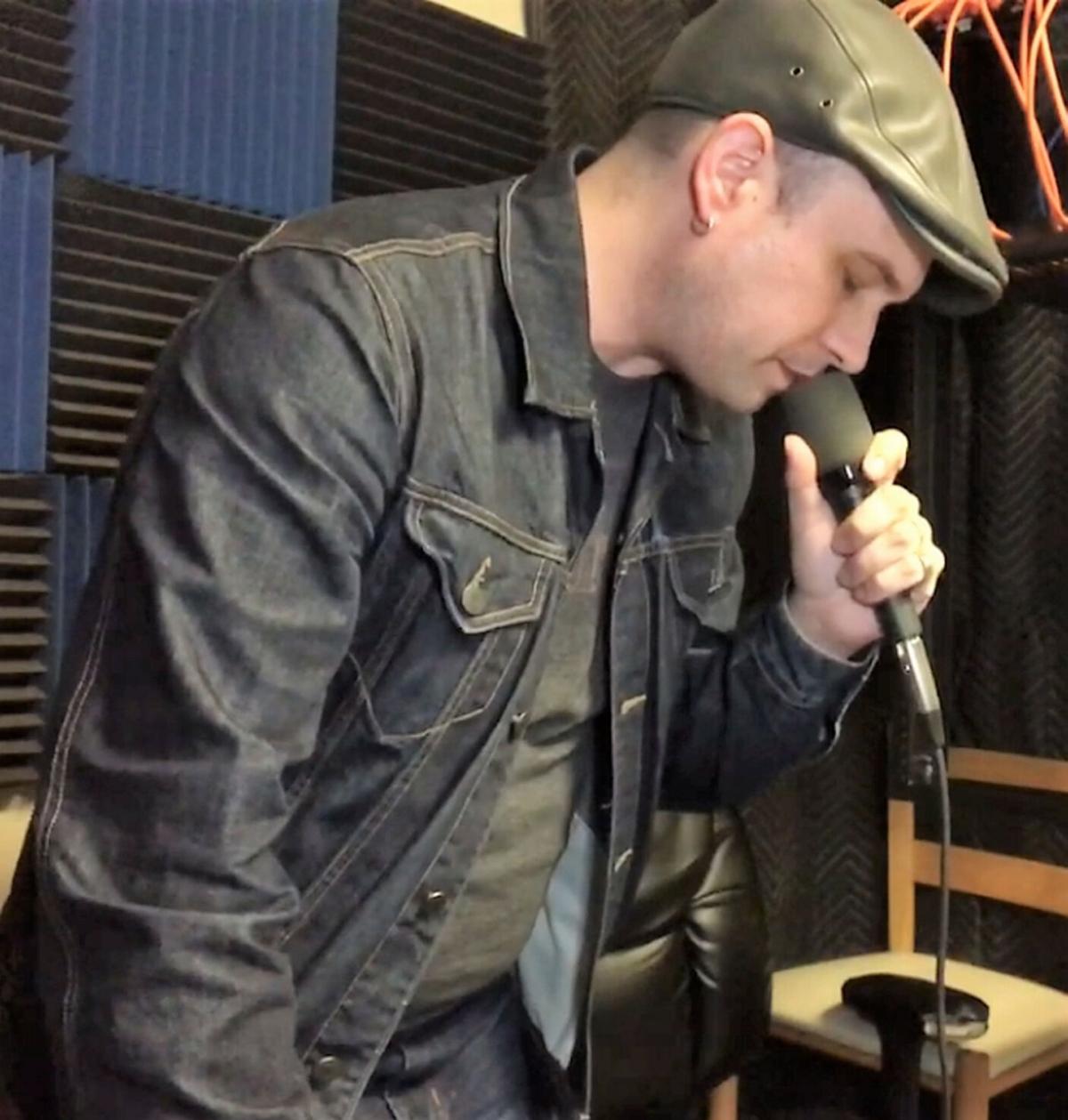 Ender Bowen, aka Joel D. VanBrocklin, lays down some vocals at his home studio in Nashville. Submitted photo

Ender Bowen, aka Joel D. VanBrocklin, sings to his daughter in 2014, around the time he was inspired to create a new album. Photo courtesy Emily Steele

Ender Bowen, aka Joel D. VanBrocklin, lays down some vocals at his home studio in Nashville. Submitted photo

A Russell native armed with a dream and musical chops moved to Nashville 15 years ago to pursue his dream in Music City. His new album will be out on Friday and although its title reflects a sense of procrastination, the finished album is a work of steadfastness.

“The most important thing for me is not necessarily why I started making music back in my teens,” said Joel D. VanBrocklin, who goes by the performing name of Ender Bowen. “Now, I kind of look at it as I’m a big believer in don’t give up on your dreams. Don’t give up on things you’re passionate about. Those things are in you because that’s something you’re meant to do — one way or another.”

Mr. Bowen graduated in 1998 from Edwards-Knox Central School, where he was a member of the concert, jazz and marching bands. He graduated in 2002 from St. Lawrence University with a Bachelor of Arts degree in music.

It’s been six years since Mr. Bowen released an album. “Lemonymix,” his third album and a remaking of its 2005 original, was released in 2015. In 2016, he gave new life to an album, “Neon Apocalypse,” which was originally released in 2001 while he was a senior at SLU.

His new album, “The Art of Tactful Procrastination,” is the result of nearly seven years of work.

“The name of the album is a title that I had for an album, since maybe, 2006, before I even moved to Nashville,” Mr. Bowen said.

Mr. Bowen works as a business account manager of marketing for medical device companies. He has also done freelance video production work. He and his wife have two children, ages 4 and 7.

“The funny thing with this album is that when I decided to get back into doing music more as a main focus as opposed to doing film and TV, I knew right away that I wanted to use this title,” Mr. Bowen said, recalling back to 2014, around the time his daughter was born.

“That’s what made me decide to get back into this because she was born in Nashville and it made me think I had some unfinished business here,” he said. “That’s why I came down here in the first place.”

Like his previous music, “The Art of Tactful Procrastination” has an 80’s alternative music vibe. On some tracks, hints of an English accent can be heard in Mr. Bowen’s vocals.

“It’s hard for me to hear it, but sometimes I can and the only thing I can think of is that I kind of taught myself to sing, listening to guys like Bono, Michael Hutchence of INXS, David Bowie and Depeche Mode,” he said.

He recorded his new album at his home studio in the suburbs of Nashville.

“I did a lot of vocals in my office at work, after hours, late at night,” Mr. Bowen said.

He had originally planned to record “The Art of Tactful Procrastination” in 2015 and release it in 2016.

“I just wasn’t prepared for how intense raising a child is when you haven’t done it before, as well as hustling for freelance jobs at the time in film and television,” Mr. Bowen said. “In a strange way, for the title, life imitated art.”

His new album has a brighter sound to it than his past works.

“In particular, this album is specifically about the struggle to pursue and reach your dreams and your passions, especially more specifically, as you get older and come into new adult responsibilities and obligations,” Mr. Bowen said. “It asks questions like how do you balance those things and what happens if you do and what happens if you don’t. But I would say this album musically is a lot brighter. That may be because the lyrical and thematic content of it is a lot heavier.”

Mr. Bowen hopes his music inspires others — that it’s “OK to still be wanting those things.”

“I think society has kind of looked at once you get to a certain age or maybe when you start to have kids or have a job, and if you’re still pursing these kinds of things even if it’s in little bits and pieces, people tend to look at you like you’re crazy or “grow up’ — that kind of thing,” Mr. Bowen said. “It may never work out. I may never get anywhere with it. My motto is passion, patience and persistence. I think eventually, in one way shape or form, you’re going to get there. Everyone has a story to tell and those stories are important and they can positively affect people you wouldn’t have even known and desperately need it.”

He added, “A lot of what your dreams and passions are, those things built in you, are intended to help people in some way, shape or form. For me, making music or doing a lot of the other writing that I do, I do them because I want to inspire people to do what they’re passionate about.”

n WHAT: The 12-track album “The Art of Tactful Procrastination” by Russell native Ender Bowen.

n A CRITIC’S VIEW: “The singles move from pulses electronic tones to poignant acoustics shining the light on Bowen’s musical versatility.” — The Other Side Reviews

n MORE INFO: To order go to enderbowen.com. Videos, including the album’s third single “Still No Closer to Tomorrow,’ can be seen on YouTube.