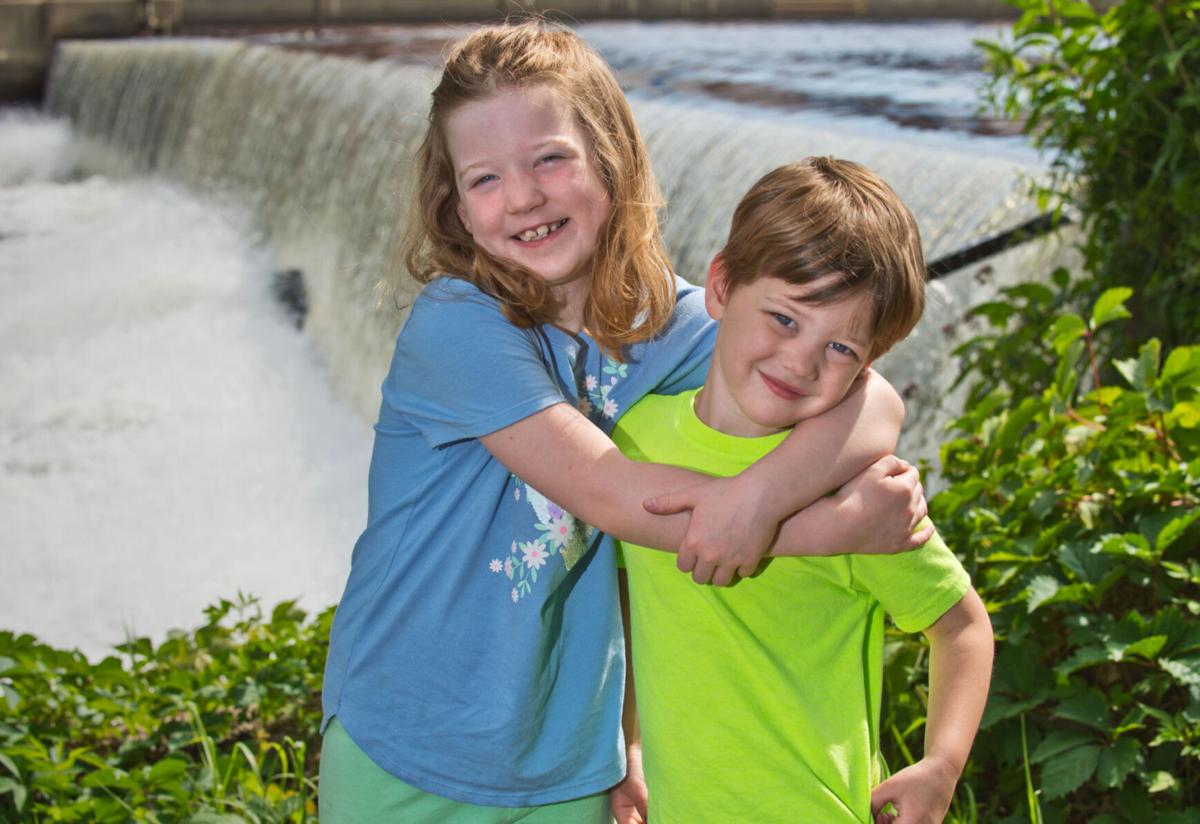 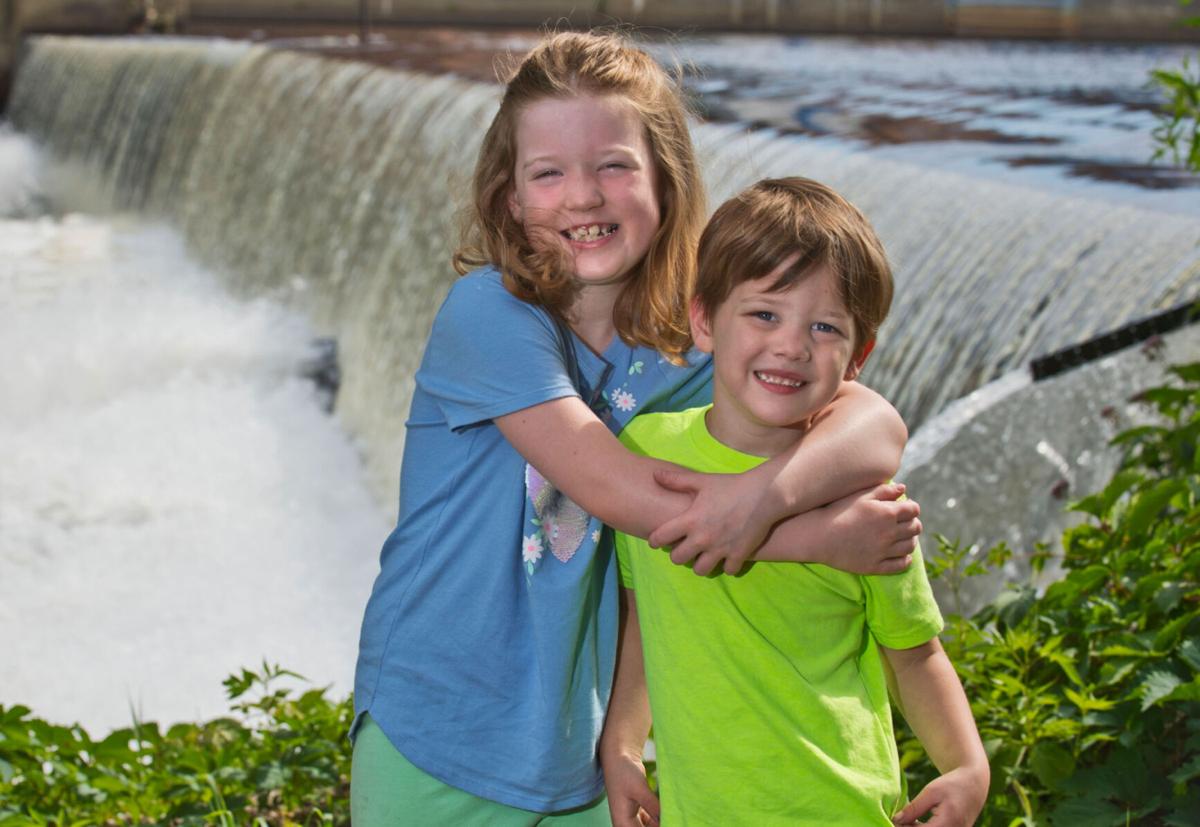 NORTH LAWRENCE — Tucked behind the Lawrenceville Baptist Chapel off Route 54, Deer River runs from its headwaters in Franklin County northwest through St. Lawrence County, emptying into the St. Regis River in Helena.

Last month, Jeanette Rose McGuire, 7, and two of her brothers, Patrick and Philip, age 6 and 4, swam off the banks of the river behind the chapel their father, John C. McGuire, has led as pastor since their family moved to the north country from South Carolina in January 2019.

An emergency hospital visit, two follow-up appointments and a few awards later, the afternoon swim on June 23 and the aftermath of a near-drowning is etched in the family’s memory.

With simultaneous terror and pride, Mr. McGuire said this week, he looked at his children that day and saw two siblings who had the tenacity to save their younger brother and the will to listen to urgent instructions.

“The first thing I thought, I was very scared, and that it was the worst day of my life,” Rose said. “I was thinking that Phil was gone or something. I’ve never seen something happen like that before, someone drowning or someone getting that hurt, so I was freaked out.”

After a few hours in the sun, Rose, Patrick, Phil, Mr. McGuire, another friend and his own three children were readying to leave the grassy area along the river on the chapel’s property. Rose, Patrick and Phil were still in the water, and Mr. McGuire was tidying up along the shore when he heard Rose calling for him from a shallow spot in the water.

Phil was under the surface, and Rose thought he was learning to swim under water.

“I looked up and I could see him through the water,” Mr. McGuire said. “And at that point I could tell it was the current that was moving him, and not him moving himself, and I yelled for Rose to pick him up. I don’t know how she did it, but she was able to hold him up and start to bring him to me as I ran to grab him.”

A few seconds later, Mr. McGuire made it to Rose and Phil, carried Phil to the riverbank and started doing chest compressions. About every five compressions, he said, Phil coughed up water, and screamed awake after a few minutes.

Through conversations with Phil in the days following the incident, Mr. McGuire said he gathered that Phil became scared where he was standing, still able to touch the bottom, and attempted to let out a scream or shout. In that attempt, he sucked in water and fell beneath the surface.

“We never heard the scream, and when he finally came back, he was screaming right then,” Mr. McGuire said. “He thought the scream he was giving then was the scream from before, which would have been 4 or 5 minutes earlier. He didn’t know the difference, and it took me a minute to convince him he wasn’t under the water any more.”

Springing into action, Rose and Patrick began gathering their belongings, and Patrick retrieved his dad’s keys and wallet. Driving to Canton-Potsdam Hospital on Leroy Street in Potsdam, some 19 miles from the spot on Deer River in Lawrenceville, Mr. McGuire said, the hardest thing was trying to keep Phil awake on the expedited, 15-minute trip.

“From where I pulled him up on the side of the bank, I had cut grass there the previous day and he had a lot of grass stuck to his chest,” he said. “So to keep him awake, I told him to start picking the grass off. I told him the doctor needed him clean.”

With some congestion from swallowed water and mild inflammation from CPR, Phil was monitored overnight, hospital staff clearing him to go home the following day — a clean chest X-ray indicated Phil was ready to be discharged.

The 4-year-old had two follow-up appointments in the week after his hospitalization, but the morning he returned home, he was already running and playing with his siblings and neighbors.

A career firefighter for six years in South Carolina and a part-time responder and volunteer for years before that, Mr. McGuire said he has worked on several drowning victims, many being children, over more than a decade of experience. He estimated Phil was under water for 2 to 3 minutes based on his coloring.

National Institutes of Health studies indicate children can typically hold their breath under water for less than 30 seconds, and a person submerged after taking in water for 4 to 6 minutes without prompt resuscitation can have permanent brain damage.

“I’ve never seen somebody be able to snap back as quickly as he did,” Mr. McGuire said. “Fifteen years of fire fighting training coming back all at one time, and having to balance that between being a dad and having to turn the dad panic off and turn the firefighter knowledge back on, I’ve never had to do that. It’s different when it’s your own kids.”

No matter the family, the body of water, the area or activity, Mr. McGuire said “anything can change in just a matter of seconds.”

“You’ve got to be very diligent, and even when you’re being diligent like my buddy and I were being, things can still happen,” he said. “Don’t forget that things can happen.”

In honor of Rose’s bravery and the strength she mustered to hold her brother out of the water — she was up to chest height in the water, too — the Lawrenceville Volunteer Fire Department presented her with the Lawrenceville Hero Award earlier this month. The St. Lawrence County Board of Legislators presented her a certificate of recognition and a Challenge Coin for her actions.

“I felt like an actual hero,” Rose said after receiving the awards. “Now that I think about it, I think I should make a superhero name. Super Rose, that would be a cool name.”

Her superpower, she said, would be “saving people.”

“I could go under water and I could see people from water or fires or things like that,” she said. “But I couldn’t really fly because I’m still a normal human.”

When she’s older, Rose said, she’d like to work as a lifeguard, or perhaps as a medical first responder or firefighter.

Mr. McGuire said he hopes to bring the kids back to their favorite river spots later this summer and help them work up to being comfortable in the water again. He also hopes to work with the community to place markers in the Deer River area behind the chapel.

Though Rose and Phil were playing in a shallow section of the river, both Rose and her dad said it’s difficult to tell where shallow portions drop off into deeper holes or where depths change. Buoy barriers, Mr. McGuire said, may help community members better differentiate depths.

In any case, Mr. McGuire hopes people can “be like Rose” when they find themselves in a crisis situation.

“Anyone is capable of doing extraordinary things,” he said. “But a lot of people freeze, and I‘m just glad Rose didn’t freeze.”

Finally, good news this summer... prayers and thanks to all involved.. this is as scary as it gets...