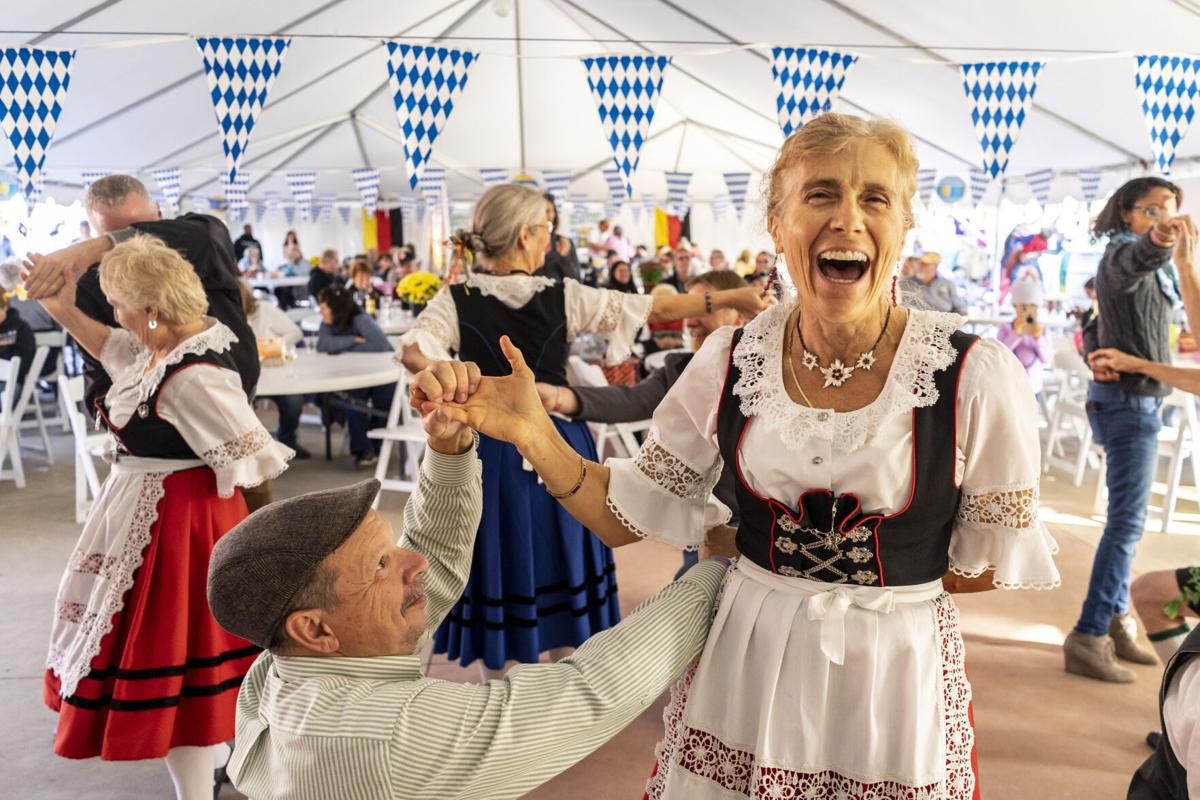 People dance together at the 15th annual Oktoberfest on Oct. 15, 2019, at the Thousand Islands Winery in Alexandria Bay, which showcased authentic German dance and music from the Enzian Bavarian Band & Dancers. This photo won first place in the feature photo category. Julia Hopkins/Watertown Daily Times 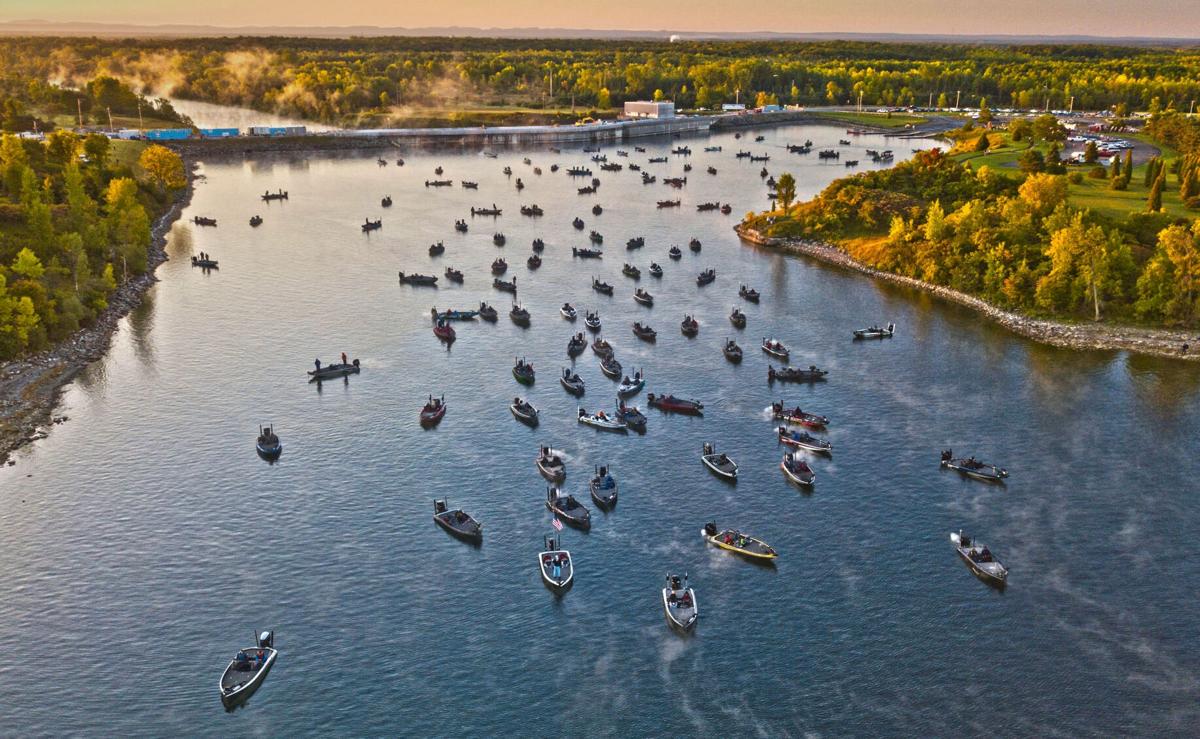 The Massena Intake Boat Launch packed with competitors in the Fishing League Worldwide bass fishing tournament on Sept. 19, 2019, preparing for the start of the first day of fishing on the St. Lawrence River. This photo won third place in the art photo category. Christopher Lenney/Watertown Daily Times 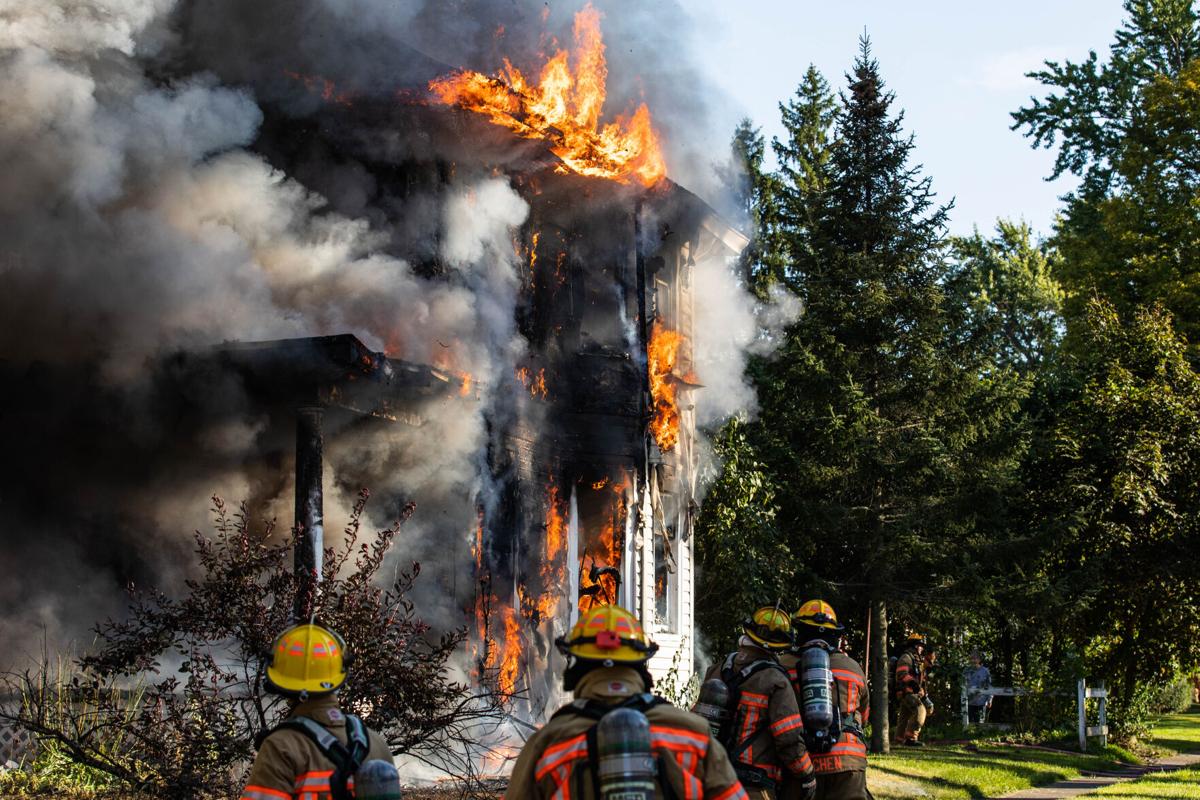 Firefighters look up at flames shooting from a fully engulfed home on Ten Eyck Street in Watertown on Sept. 20, 2019. This photo won third place in the spot news category. Sydney Schaefer/Watertown Daily Times 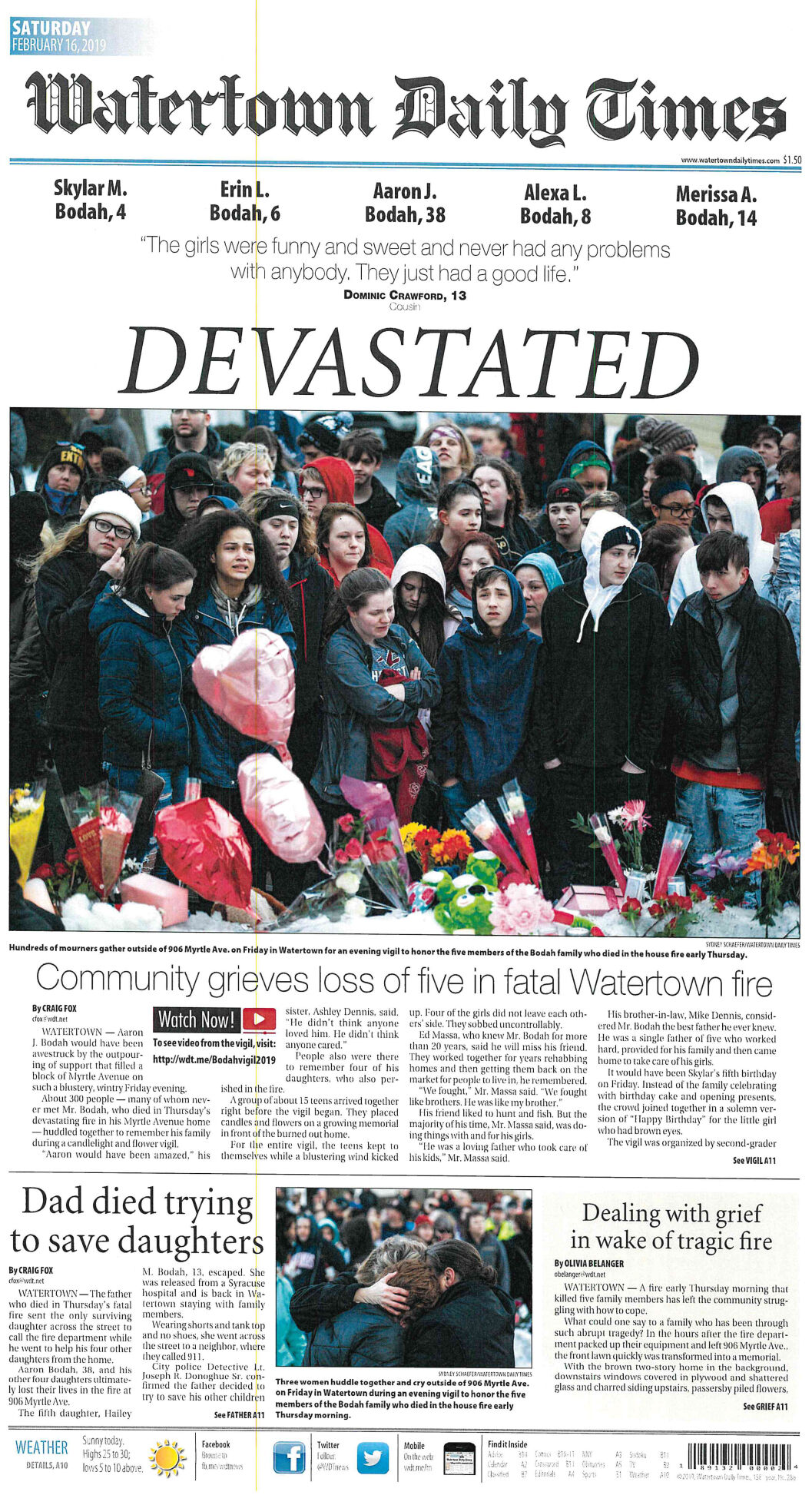 WATERTOWN — The staff of the Watertown Daily Times and NNY Magazines have been honored by the New York Press Association for their excellent work in the association’s 2019 Better Newspaper Contest.

The association, which oversaw the judging of 2,918 entries — nearly 200 more than the year prior — from 173 newspapers across the state, awarded recognition at the organization’s 2020 NYPA Spring Conference. The conference was streamed online due to the ongoing COVID-19 pandemic. Videos were posted to the association’s website.

The staff of Northern New York Newspapers earned 13 awards, including three in first place, one in second place, seven in third place and two honorable mentions and for news, photography, advertising and newspaper design, as well as magazine design.

“Every day our staff rises with one mission: to report the most relevant, timely and ethical news to readers throughout the north country in the form of stories and photographs that are worth reading and viewing. This recognition by a panel of peer journalists means they too feel the same about our work,” said Alec E. Johnson, editor and publisher. “While we enjoy the recognition, the real winners are the readers who are supporting our mission by reading the newspaper, and subscribing. We thank you for your support.”

Craig C. Fox, a 10-year veteran reporter at the Times, and former Times reporter Abraham P. Kenmore, were awarded first place in the spot news category for their coverage of a fatal fire in the city of Watertown on Valentine’s Day last year. The fire, which occurred at 906 Myrtle Ave., killed a father and four of his five daughters in the early morning hours of Feb. 14, 2019. Aaron J. Bodah, 38, and four of his daughters, Merissa, 14, Alexa, 8, Erin, 5, and Skylar, 4, died from injuries suffered in the fire.

“This is the most fatalities I’ve had in my 33 years of working for the city,” former City Fire Chief Dale C. Herman said in the story published in the Times on Friday, Feb. 15, 2019.

The community rallied around the family and surviving daughter Hailey Bodah, then 13, in the weeks following the tragedy. Hundreds gathered for celebration of life ceremonies and vigils held outside the home in the immediate days after the tragedy, and nearly $100,000 was raised for Hailey.

“Solid and detailed reporting of a horrible tragedy written with compassion and respect,” the judges wrote of the story.

On Feb. 15, the community rallied for the first time in front of the Myrtle Avenue home, drawing hundreds to a growing memorial in the snowbank in the home’s front yard. From the porch of the home, Sydney D. Schaefer, former multimedia manager and current assistant managing editor of the Times, captured a heartbreaking image of friends crying, inconsolable, in front of the makeshift memorial. On Saturday, Feb. 16, 2019, the photo ran six columns across the front page of the Times under a headline reading: “DEVASTATED”

Philip J. Sanzo, who recently celebrated his second year at the Times, was awarded first place in the sports feature category for his profile of Watertown Red and Black player Ky Sawyer. The semi-pro football player lost the lower portion of his left leg after crashing his motorcycle he intersection of Factory and High streets in Watertown in 2015. He hadn’t played football since the accident, but on the night of Saturday, Aug. 17, 2019 — the day the story was published — Mr. Sawyer made his triumphant return to the field. He reintroduced himself to the home crowd when the Red and Black hosted Plattsburgh for the home opener of their 2019 season.

“Still can’t believe I was lucky enough to take the field again last night, did better than I expected and now I’m ready to put in extra work for the rest of the season! #thecomeback,” he wrote in an Instagram post accompanying a photo shared the next night. “I just wanted to prove to myself that I’m still who I was before,” in the story published in the Times on Aug. 17.

“The story is an inspiring profile at an athlete whose life is marked by incredible twists and turns,” the judges wrote on Mr. Sanzo’s story.

The story was photographed by Ms. Schaefer.

Mr. Wockenfuss is full of stories, Mr. Gay wrote, but “the words don’t flow from his mouth the way they did when he was catching behind the plate for the Detroit Tigers from 1975-83, a fan favorite for his unusual name and even more unusual batting stance.”

The former MLB player suffers from dementia, he said, because Buddy Bell, a Cleveland Indians all-star third baseman in the 1970s collided with him during a game in Cleveland.

“The writer handles a delicate subject with compassion and sensitivity,” the judges wrote of Mr. Gay’s story.

The story package was designed by Mr. Underwood and photographed by Ms. Schaefer.

In the contest’s photography categories, two of the current Times’ photographers placed in the competition, and a former photography intern.

Former intern Julia Hopkins placed first in the feature photo category for a photo captured at the 15th annual Oktoberfest at the Thousand Islands Winery in Alexandria Bay on Saturday, Oct. 15, 2019.

“A lovely shot!,” the judges wrote of Ms. Hopkins photo. “Close up and personal in a way that pulls the viewer in.”

Christopher Lenney, staff photographer in St. Lawrence County, placed third in the art photo category for a drone shot he captured last summer at the Massena Intake Boat Launch in the early morning hours as anglers launched for a day of bass fishing during the Fishing League Worldwide competition.

“Intriguing aerial perspective capturing the moment of the launch of this event,” the judges wrote. “Lighting gives a pleasing hue to the blues and greens and the misty patches help set the scene.”

Ms. Schaefer placed third in the spot news category for a photo captured Friday, Sept. 20, 2019. The photo shows firefighters looking up at flames shooting from a home on Ten Eyck Street in Watertown as the home is fully engulfed.

“It feels so real,” the judges wrote. “The smoke, the crisp vividness makes the you feel like you are witnessing the blaze.”

“This is a good example of the power of photography as a selling tool in great ads,” the judges wrote of Ms. Boname’s classified ad submission. “In fact, ‘Photography in Advertising’ should be its own category for entries.”

Also on the advertising staff, the following awards were received:

The Johnson Newspaper Corporation, comprised of the Times, The (Batavia) Daily News, Livingston County News, (Hudson) Register-Star and (Catskill) Daily Mail, ranked third for most contest points, bringing in a total of 235 points.

“Wonderful capture of the spectators’ surprise and delight during play of America’s favorite summertime game,” the judges wrote of Mr. Gutman’s winning image.

Examples of the winning mentioned winning works can be found online at NNY360.com, thedailynewsonline.com and thelcn.com.