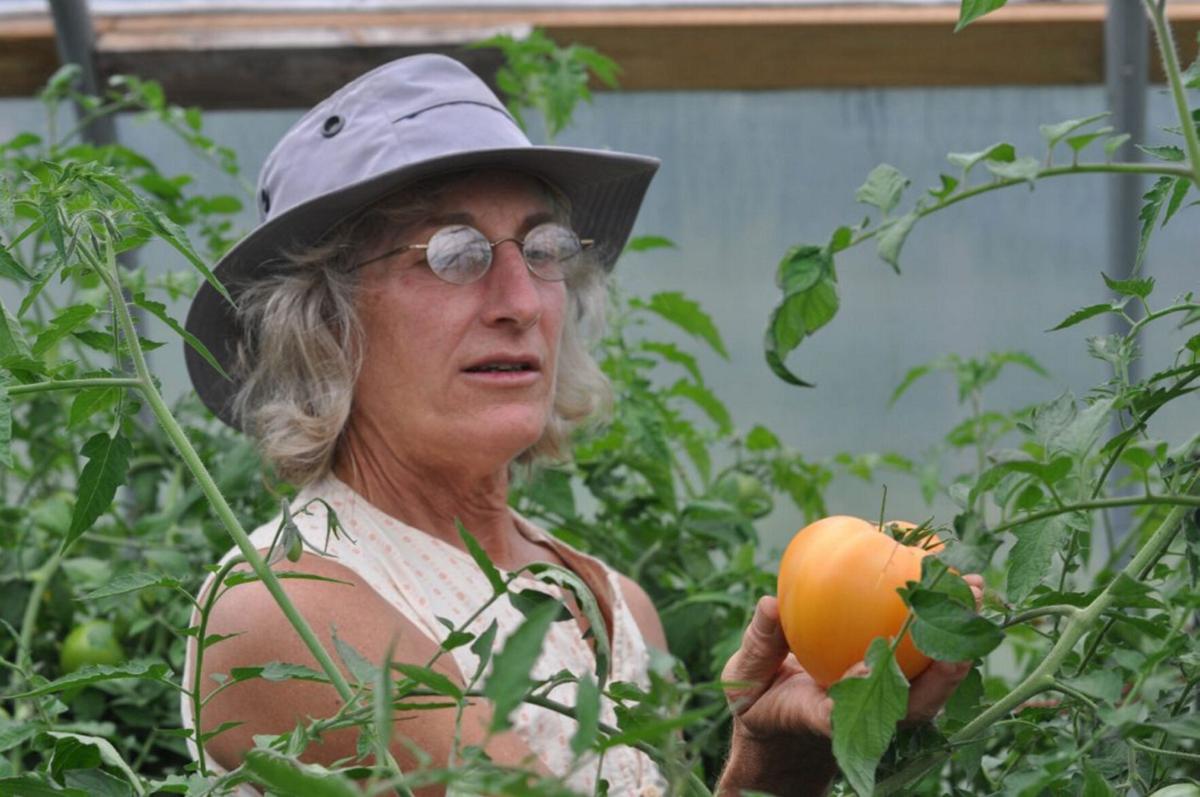 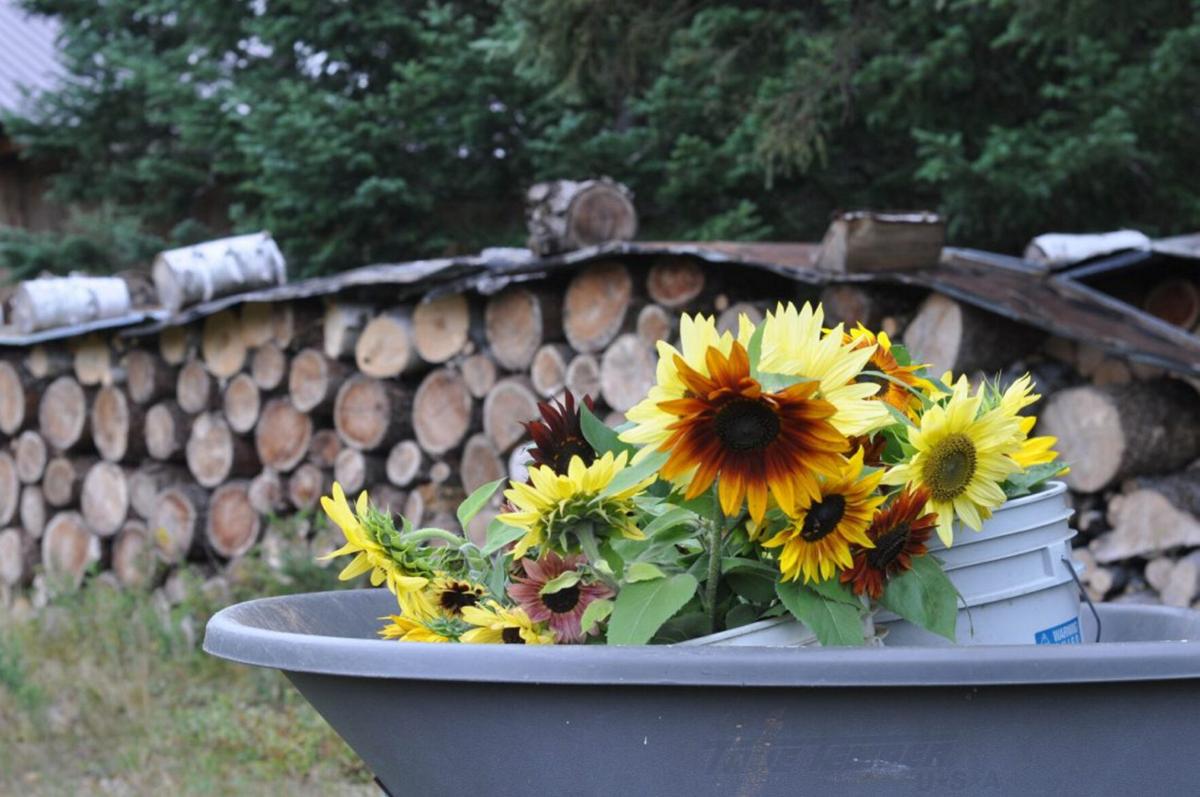 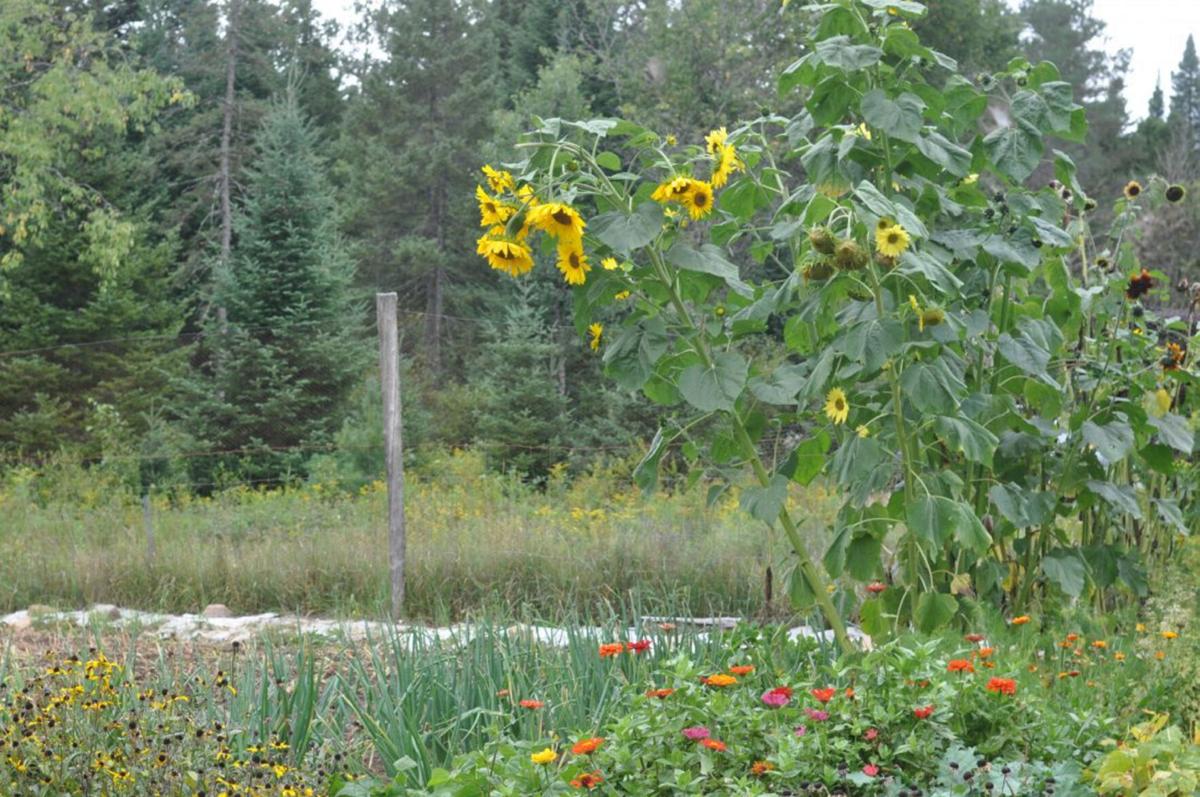 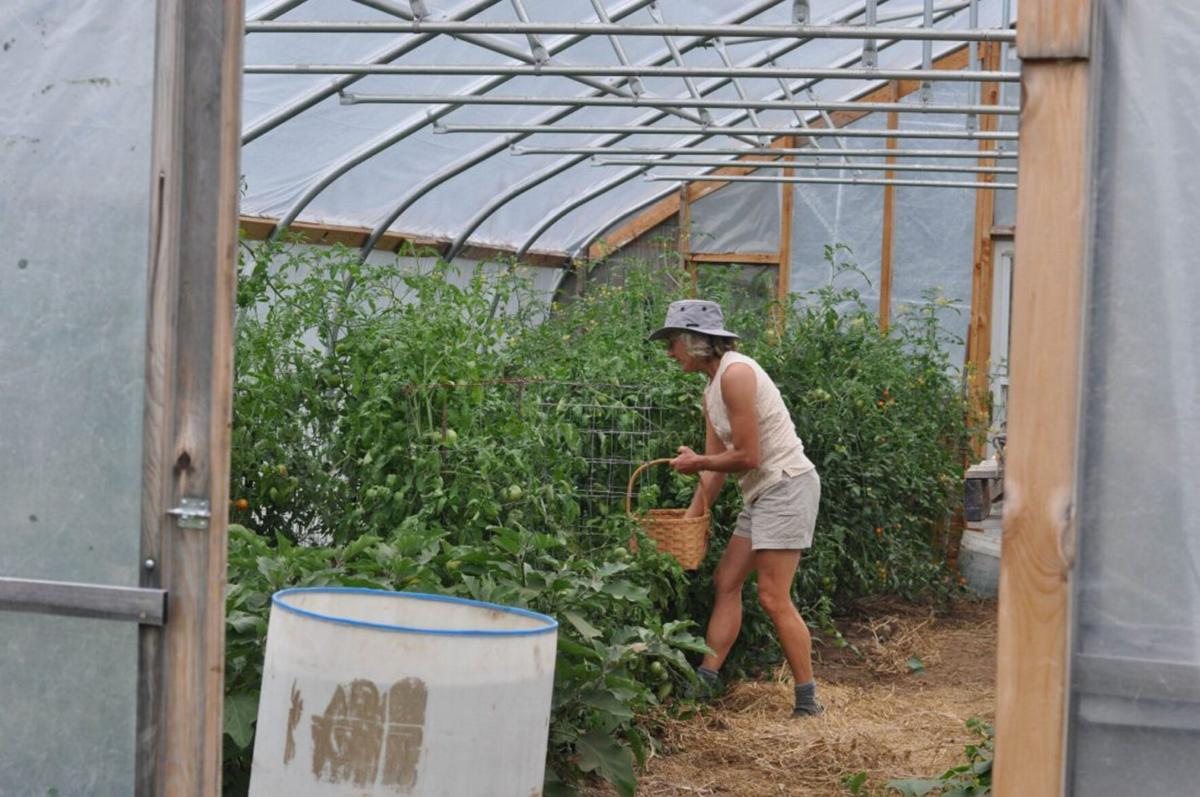 VERMONTVILLE — A small slate sign by the dirt driveway reads “Sanctuary Farm,” a fitting name for the tiny farm that Denise Griffin works when she’s not working full-time at the hospital.

Griffin, 60, an emergency room nurse who splits shifts between the Saranac Lake and Lake Placid ERs, has carved a one-acre organic farm from the 45 acres where she lives, in a house that was itself recently built into the landscape.

Rows of squash, dry beans, onions, French melons, tomatillos and parsley are knitted with bright sunflowers, zinnias and black-eyed Susans. A greenhouse filled with tomatoes and zucchini sits near another neat field of corn.

“I try and focus on crops that you don’t really need to mess with,” said Griffin on a recent afternoon as she knifed Charentais melons from their vines and gently loaded them into a waiting wheelbarrow. “I have boreal chickadees here,” she said, noting that the northern climate wasn’t exactly conducive to easy farming.

She built her house, an A-frame roofed with solar panels, a few years after she bought the land, and it now sits with the garden, greenhouse and a few small outer buildings in among over 40 acres of white spruce and balsam fir.

“I want to be a part-time farmer,” she said, cutting down an outsize bouquet from a stand of towering sunflowers. Griffin left farming for years to support her family — her daughter now lives in Florida — and continues to work full-time. Her other job is stressful, especially during a pandemic, so farming is a reprieve from the worries of health care. The farm’s name, she notes, is particularly accurate now.

“This is my first year with the greenhouse, and I’m learning how to use it,” she said, filling a basket with heirloom tomatoes. Cornstalks wave beyond the greenhouse’s back door, part of an outer field along with garlic, winter squash, willowy stalks of asparagus plants gone to seed and potatoes of different colors.

Griffin is one of the group of local farmers taking part in Hex & Hop Brewing’s new Saranac Lake taproom and farm incubator, and she also sells to Nori’s market, also in Saranac Lake, and Green Goddess in Lake Placid. She also participates in McColloms Market, a local online resource that provides local products to families in the Saranac Lake area. Like many farmers, produce she once sold to restaurants has had to be redistributed because of the pandemic.

Griffin grew up in Connecticut, has agriculture degrees from Sterling Agriculture and Vermont Technical College, and spent time farming in both Vermont and Australia. Thirty years ago, she moved to the Adirondacks. She had a farm in Chateaugay before buying the land in Vermontville eight years ago.

The land where she now farms and lives has a long, storied history. Her farm and the surrounding acres were once part of the land owned by abolitionist Gerrit Smith. In the mid 19th century he divided up sections of it to give to Black people, who were required to be land owners as a condition of being allowed to vote.

What is now Sanctuary Farm was given to John Thomas, who farmed it for a time. Thomas had escaped slavery in Maryland in 1839 and lies buried in Vermontville’s Union Cemetery. Griffin said a neighboring property was once owned by Thomas’ daughters. She hadn’t known about the history she lived on until after she bought the place and started working the land.

“I found a few artifacts that I gave to the Underground Railroad Museum,” she said, of the museum in AuSable Chasm that’s part of the North Country Underground Railroad Historical Association. She said she found tools, hoes and horseshoes, some of them as she gardened in the dirt she was then standing on.

Some of the land Smith gave to Black former slaves was called Timbuctoo, a pre-Civil War settlement in the town of North Elba near modern-day Lake Placid. Other Black settlements on lands he donated were near Loon Lake and Bloomingdale, near Griffin’s property. All told, Smith gave away some 120,000 acres, beginning in 1849. Almost nothing from that time period remains except for a few atavistic place names.

The history gives a further meaning to the name Griffin chose for her tiny farm, though at the time she named it for the land near where her grandparents lived when she was a kid. “They referred to the forest as ‘the sanctuary,’” she said.

Since COVID-19, the farm has become even more of a sanctuary, not only from her work in emergency rooms but from an uncertain economic world. After she stopped being able to sell to local restaurants, she began donating produce.

Isn't it true that remote ancestors of some indigenous people might have hunted in the vicinity of that farm several hundred years ago. Doesn't that give them dibs?