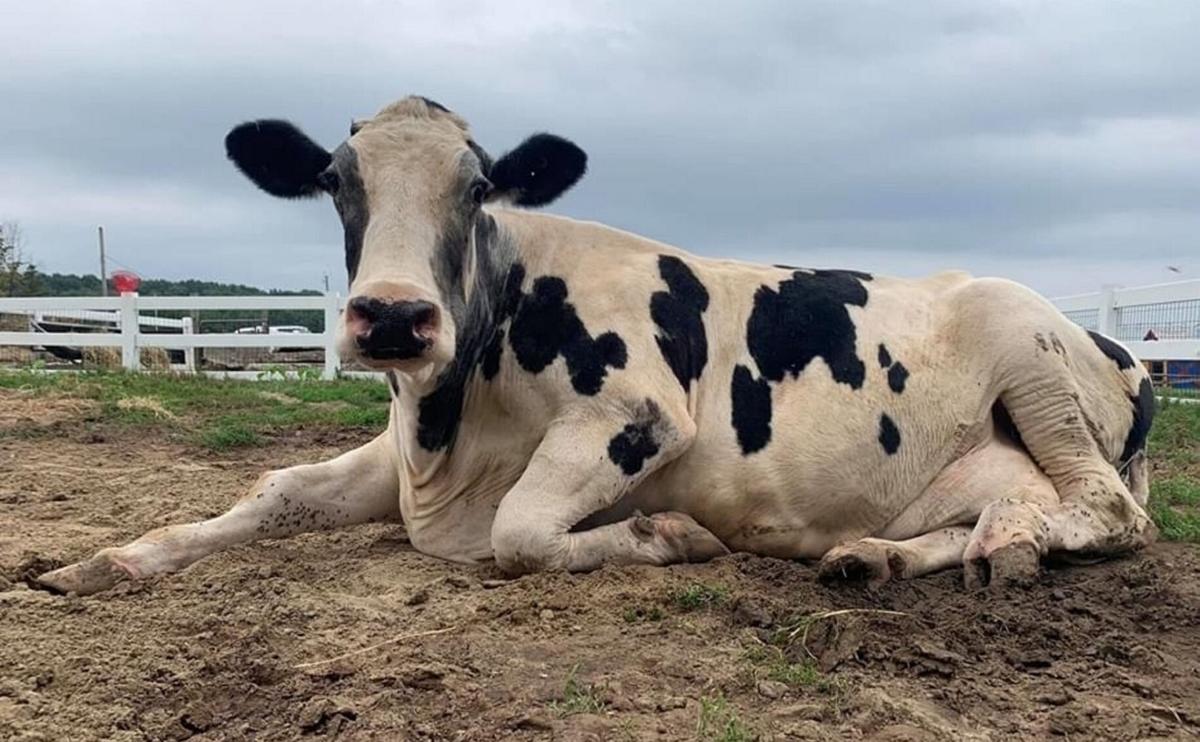 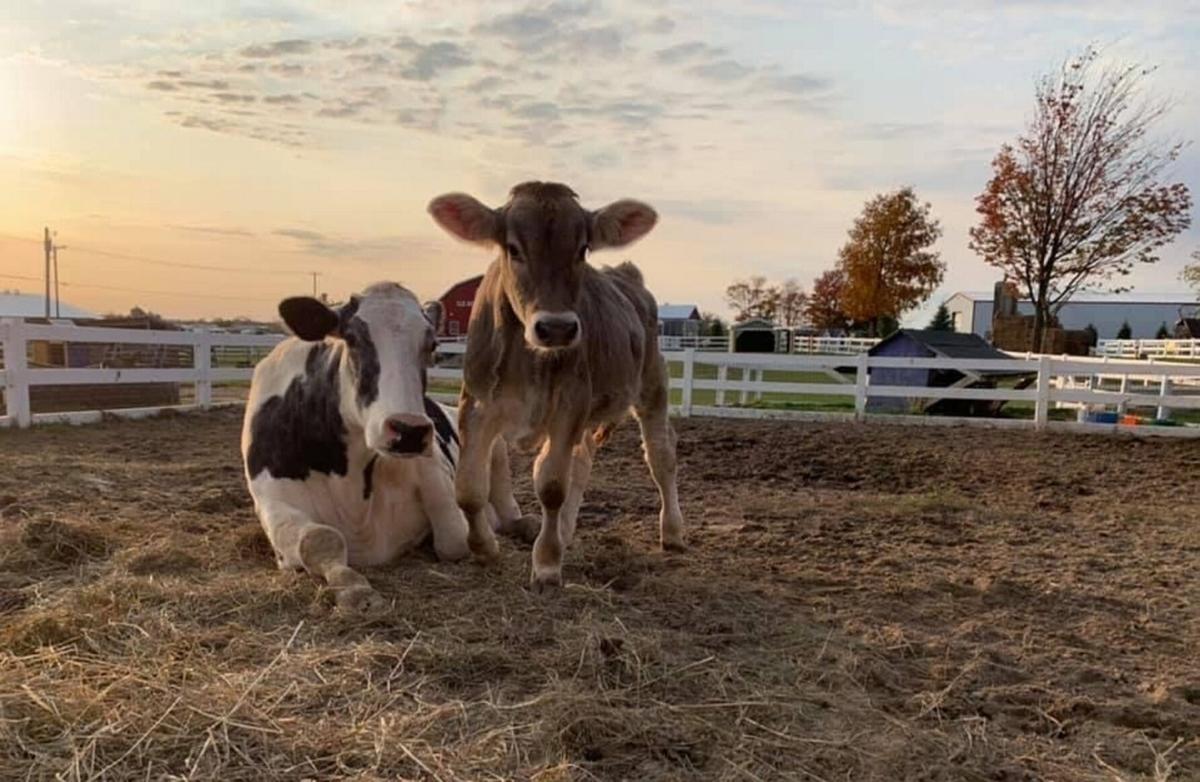 While retired, Patriot was often paired with calves. “The young guys were a little bit too young to go out with the big cows on pasture on the hay ride and Patriot was kind of too old to go out there,” said Robbins Family Grain and North Harbor Dairy spokesman Jake Ledoux. “They did really well together. She was kind of a calming presence.” Courtesy of Robbins Family Grain and North Harbor Dairy

While retired, Patriot was often paired with calves. “The young guys were a little bit too young to go out with the big cows on pasture on the hay ride and Patriot was kind of too old to go out there,” said Robbins Family Grain and North Harbor Dairy spokesman Jake Ledoux. “They did really well together. She was kind of a calming presence.” Courtesy of Robbins Family Grain and North Harbor Dairy

“She was as regular as a calf could be,” said Robbins Family Grain and North Harbor Dairy spokesman Jake Ledoux.

But as 1035 grew at the Robbins operation on County Route 145, she developed a reputation. This was a special cow.

So, 1035 was given a proper name: North Harbor Bonanza Patriot, or simply, Patriot. In true patriot fashion, she vigorously supported the dairy industry and in her own quiet way, was prepared to defend it against all enemies and detractors.

Her main tactic was her prodigious output, and when she could no longer do that, Patriot became a “sweet old lady,” welcoming visitors to Old McDonald’s Farm, the business connected to North Harbor Dairy.

On Tuesday, family and staff at Robbins Family Grain and North Harbor Dairy said goodbye to Patriot before a veterinarian gently sent her afield for her final rest. She was “an astonishing” 19 years old.

“For a cow on a regular operating farm, the life expectancy is usually around six, seven years,” said Jay M. Matteson, Jefferson County’s agricultural coordinator. “When you have a cow that is milking for that long, and then retires, that is a long time.”

When Patriot was milking, she produced more than 400,000 pounds of milk, equal to about 46,511 gallons, which neared record territory, farm operators say. According to the U.S. Department of Agriculture, the annual average milk production per cow in the U.S. is 23,500 pounds. Over a six-year period, that would create 141,000 pounds of milk. Patriot retired from milking at age 13.

Patriot benefited the dairy operation in other ways.

“She had nine calves throughout her journey here at the farm,” Mr. Ledoux said. “Nine is a big number.”

Those calves were given numbers, with matching ear tags, indicating the line of procession for cattle at the farm. Four were heifers: 2053, followed by 3145, 3860 and 4587.

“If you put crops in the ground, you have numbers that are a little bit simpler, but with cows, you have a lot of factors going in there,” he said. “The deal is you can’t manage what you don’t measure. That really plays in the dairy business.”

“When you think about the economic impact that had on the community, and all that milk produced on the farm — that helped employ local people, bought local equipment, lumber and stuff like that — you see how spiritually important she was to the farm as well as economically important. She meant a lot to the farm.”

Mr. Ledoux said that next to safety, animal welfare is a priority at Robbins Family Grain and North Harbor Dairy. For example, in the barns, cows have sand bedding.

“It’s really comfortable for cows, it’s clean, sterile and allows for a clean environment for them to lay down on,” he said.

Condolences from the public are rolling in for Patriot on the Facebook page of Robbins Family Grain and North Harbor Dairy. Most people knew Patriot from her retired days at Old McDonald’s Farm, where people pet her and fed her; a favorite for the children. The comments on the Facebook post about Patriot’s passing are gratifying, Mr. Ledoux said.

“I think sometimes in farming we get wrapped up in the day-to-day and we forget that there are people out there, that maybe we don’t speak to every day, but they are rooting for us,” Mr. Ledoux said.

This autumn, it appeared that Patriot’s joints and bones were beginning to bother her more so than in past years, and she appeared to be in discomfort. The vet was summoned.

“Sometimes, it’s hard to understand, but you are doing it for their benefit,” Mr. Ledoux said. “Winter was coming. Patriot was doing fine last winter, but this winter, she was moving slower. In the winter, she goes to the dry cow barn. She had sand bedding, access to feed and water and was out of the elements. But you could see she had some issues. The decision was made not to cause her any discomfort this winter. We could have her go out on good terms, painless.”

Patriot was “respectfully buried” on the farm property.

“She was a big part of this farm,” Mr. Ledoux said. “She’s been here since almost the beginning in terms of when the dairy expanded and modernized. Now, here we are in 2020, and her legacy is still out there — in the barn.”