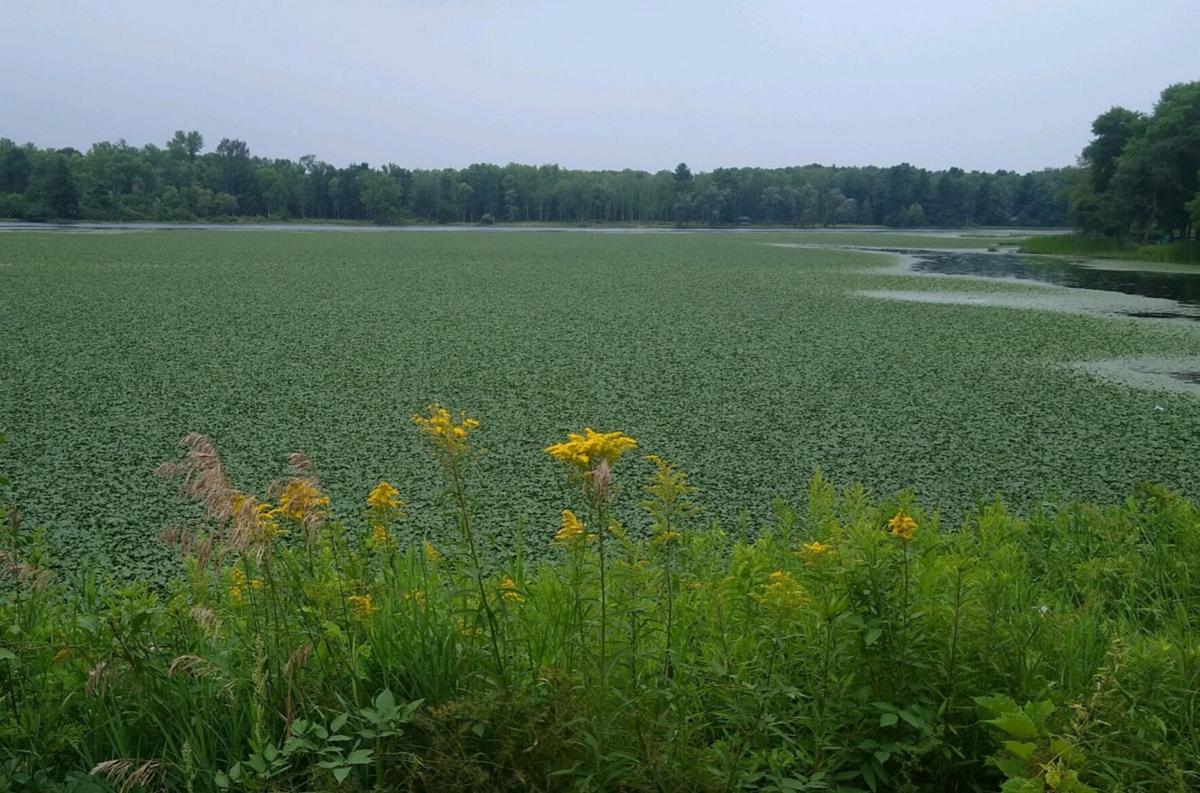 A bay of the Oswegatchie River near Heuvelton choked with water chestnuts. Photo provided by John Compo 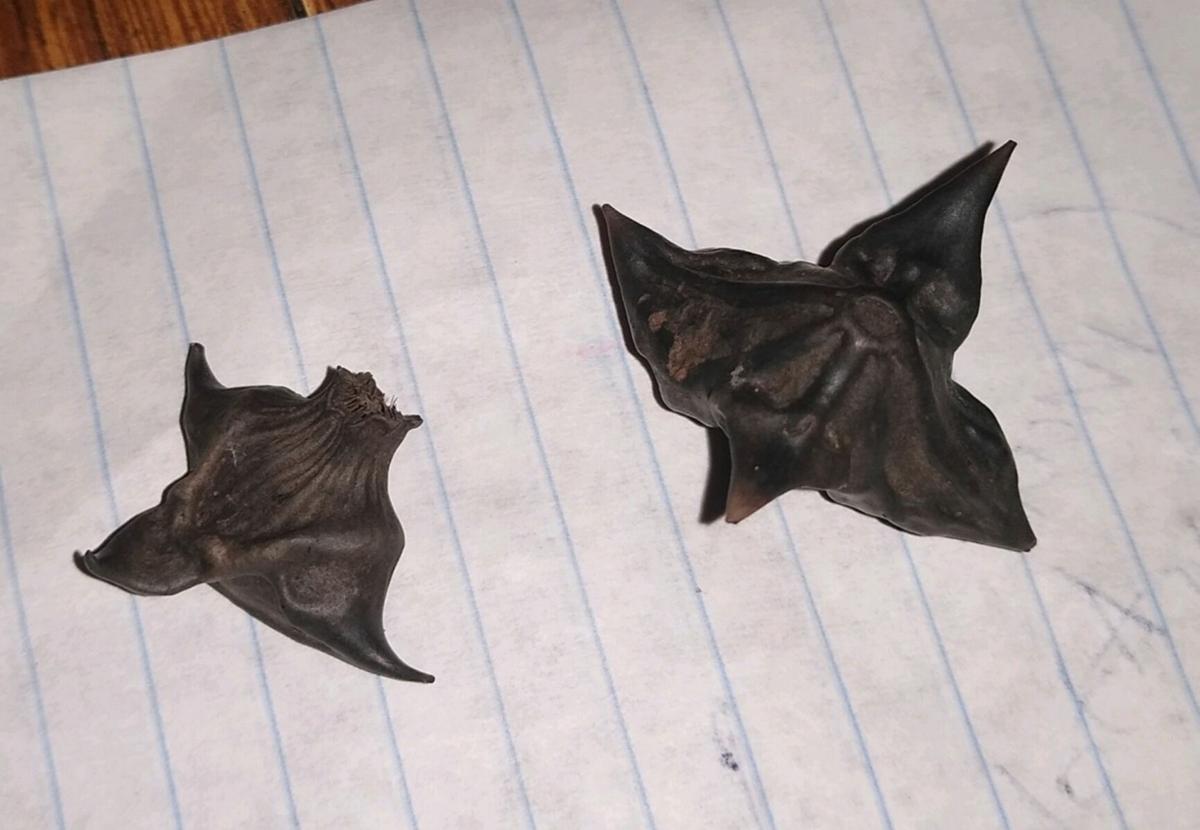 A photo of a dried water chestnut, an invasive plant species that has choked up areas of the Oswegatchie River near Heuvelton. Photo provided by John Compo 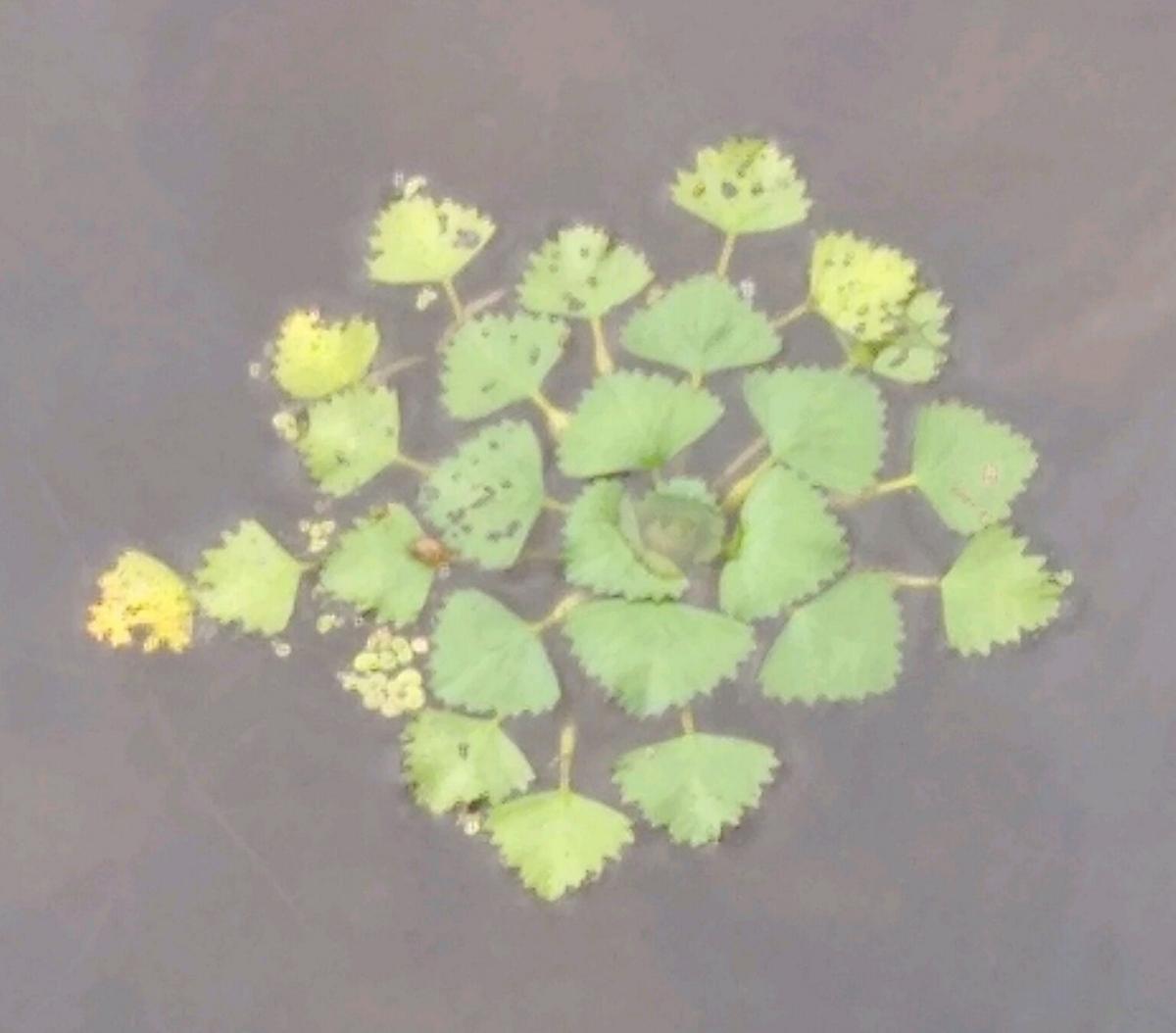 A up close view of a floating water chestnut, an invasive plant species that has choked up areas of the Oswegatchie River near Heuvelton. Photo provided by John Compo

A bay of the Oswegatchie River near Heuvelton choked with water chestnuts. Photo provided by John Compo

A photo of a dried water chestnut, an invasive plant species that has choked up areas of the Oswegatchie River near Heuvelton. Photo provided by John Compo

A up close view of a floating water chestnut, an invasive plant species that has choked up areas of the Oswegatchie River near Heuvelton. Photo provided by John Compo

HEUVELTON – Plans are being developed to combat the spread of the water chestnut plant - an invasive aquatic plant species that can choke out waterways and cause major ecological harm - on the Oswegatchie River near Heuvelton.

John Compo with the Black Lake Association has been leading the charge to combat the water chestnut plant that has taken over bays of the Oswegatchie River just outside of Heuvelton. It has choked up bays on the river, making some portions completely impassable by even kayak or canoe.

“Been going for a little over three years that we know of. It’s consumed almost 20 acres in three years time. It’s pretty amazing when you go and actually look at it. It seems like its growing more and more every day you look at it,” said Compo, “This is like a pandemic on the water. This will completely ruin us.”

The water chestnut plant, Trapa natans, is a highly aggressive invasive aquatic plant found in lakes, bays, canals, and slow moving rivers with muddy bottoms. The plant was likely introduced to North America as an ornamental plant for its unique size and shape.

Rob Williams, a limnologist with The Nature Conservancy and St. Lawrence-Eastern Lake Ontario Partnership for Regional Invasive Species Management, or SLELO PRISM, based in Pulaski, said the aquatic plant poses a significant threat to the ecology of the state’s waterways and requires significant resources for annual management.

“In central and northern New York, millions of dollars have been spent on suppressing water chestnuts since the early 1980’s yet the problem has not gone away threatening ecological integrity of our freshwater resources, tourism and recreation. These plants can reduce navigation in a waterway. They can reduce aesthetics, reduce recreation and cause oxygen depletion during decomposition,” said Williams.

Compo said that they are working on a plan for next June.

“We got a plan. We have 12 associations on board to help with volunteers,” said Compo, “My friend Jay Carter has got two weed machines and he’s going to bring them up next summer for free and we are going to get as many volunteers together as possible. I’ve spoken to Brookfield Energy they are going to help work with the dam, shutting if off, raising the water so we can get the machines in further.”

What can’t be taken out with the weed machines will have to be done by hand, according to Compo.

“A whole pile of people in canoes and kayaks pulling weeds that we can’t get the weed machine to,” he said. The Town of Oswegatchie and the Village of Heuvelton will provide dump trucks and pay loaders to haul away the plants, according to Compo, and “dump it in a pit somewhere so I don’t have to look at it again.”

The ultimate goal is to prevent the water chestnut plants to spread into Black Lake or St. Lawrence River or any other local body of water, according to Compo.

Compo said that he has been in contact with Save the River, SLELO PRISM, St. Lawrence Sportsman’s Club, St. Lawrence County Sportsmen Federation , Chippewa and Black Lake fish and game clubs, Thousand Island Land Trust and St. Lawrence Waterfowlers who have said they will help and Compo has reached out to others for help next spring with the undertaking.

Williams said that manual hand pulling of small infestations can be effective but must be done repeatedly and prior to seed drop. The seeds can remain viable in the sediment for several years before germinating. Currents in rivers can carry the seeds great distances only to deposit them and start a new population.

“They must also be disposed of properly to ensure they are not reintroduced to the water,” he said.

The most effective way to prevent the spread is following a “Clean, Drain, Dry” protocol for watercraft and equipment, according to Williams.

For more information on the water chestnut plant, check out www.sleloinvasives.org.