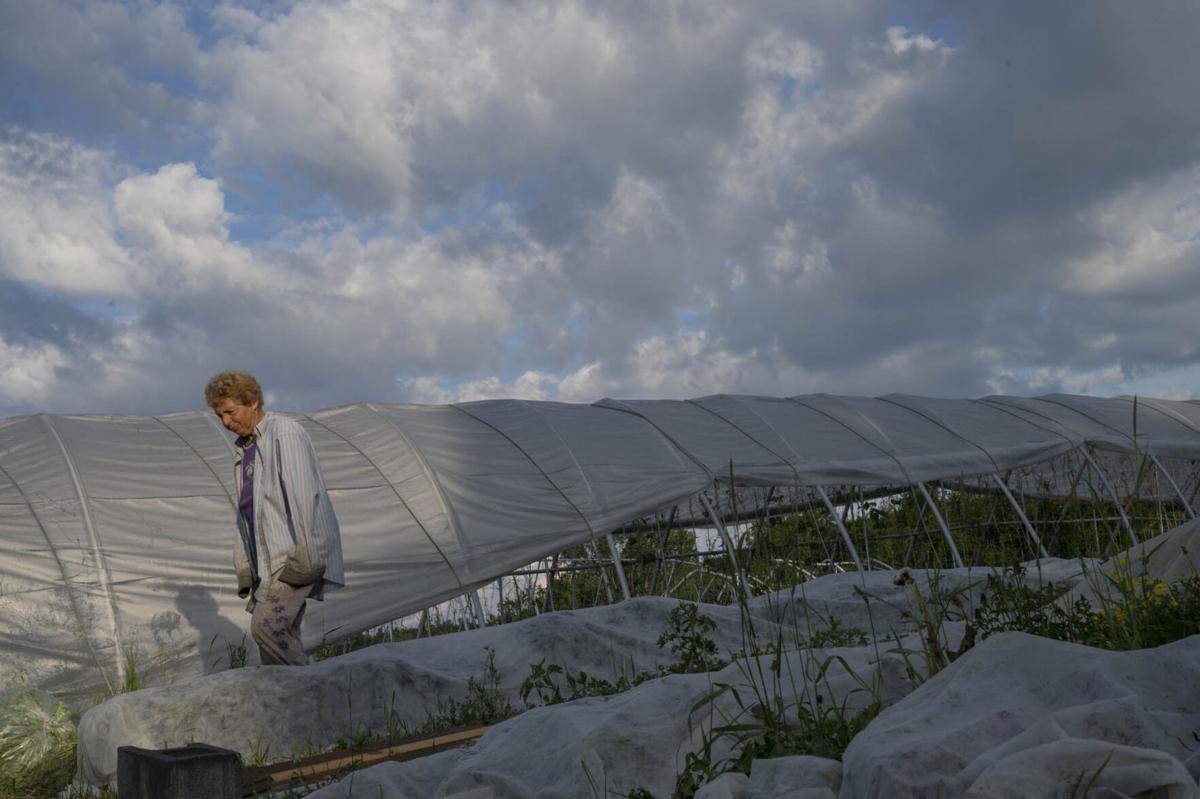 Dani Baker heads into her house from the field on June 26 to package, clean and date the Swiss chard and kale she picks before the sun can hit it each morning. Lauren Miller/Watertown Daily Times 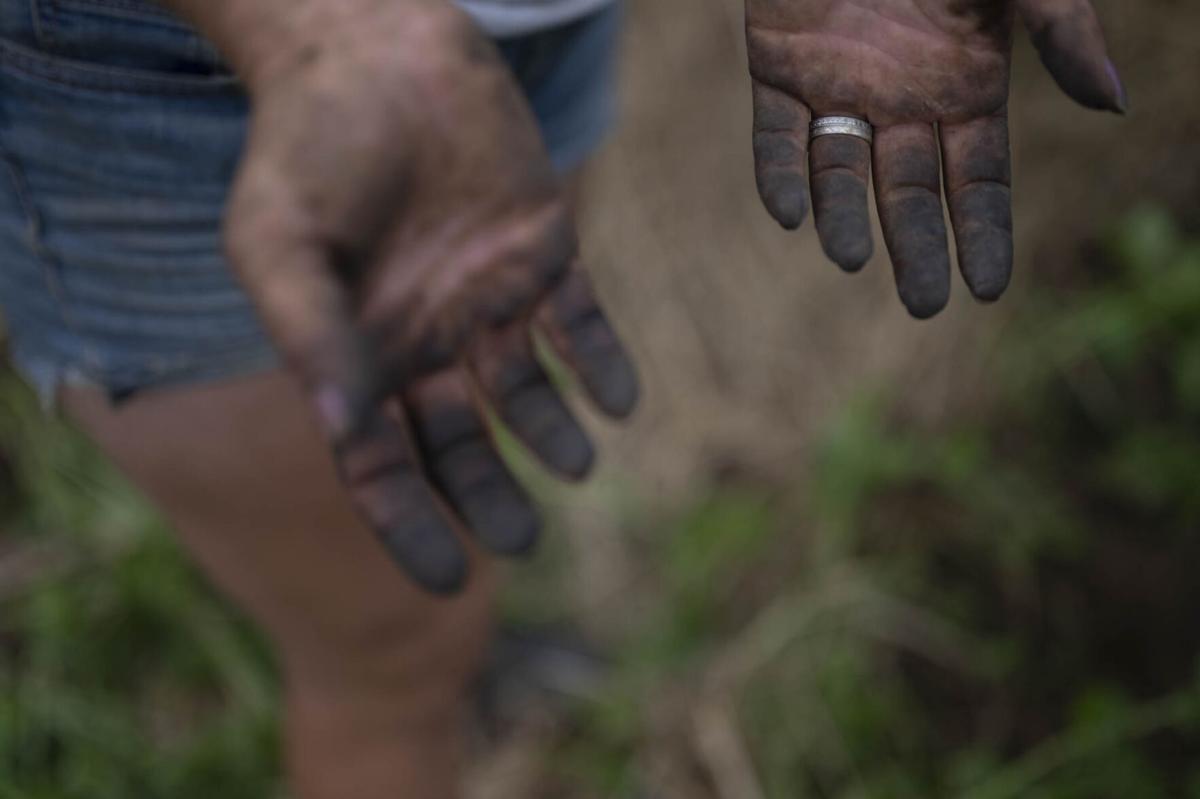 A worker at Grindstone Farm in Pulaski shows the dirt on their hands. Lauren Miller/Watertown Daily Times 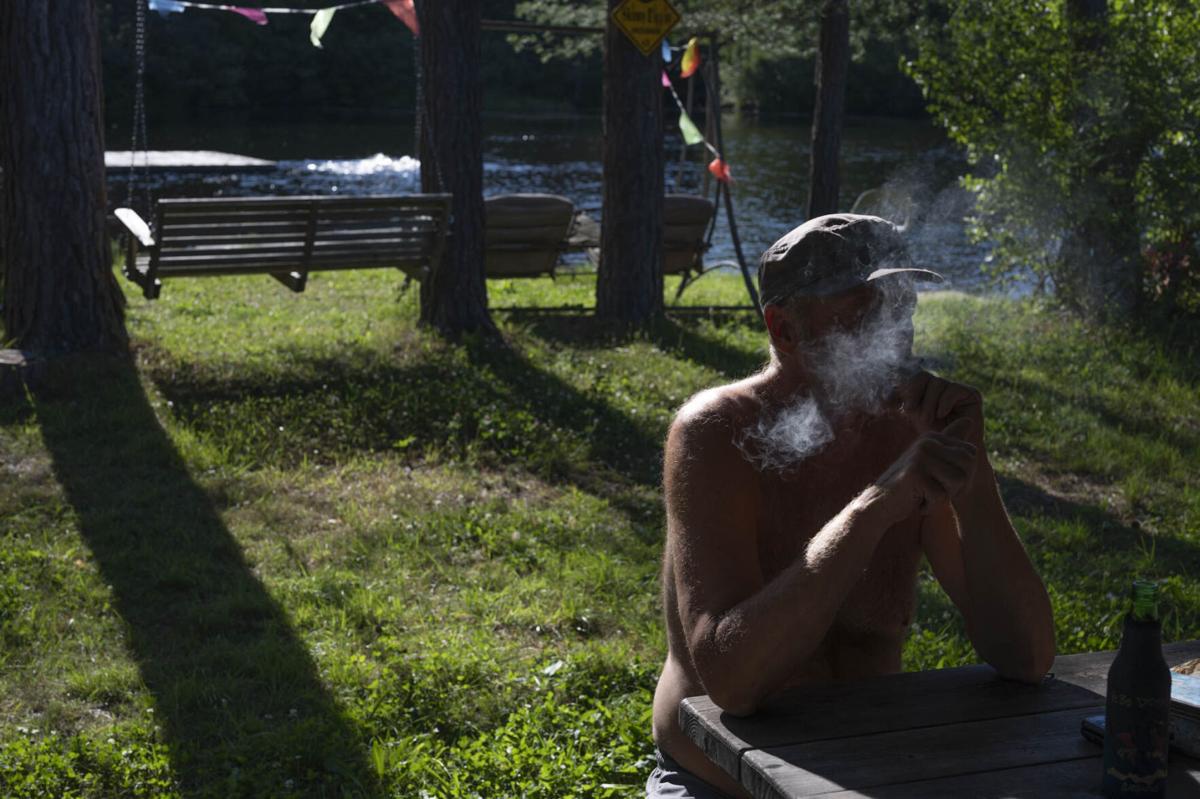 Dick de Graff relaxes with his friends at the pond on his property on July 28. Every Tuesday night, current and past employees, as well as friends of Mr. de Graff gather for an outdoor distanced potluck. Lauren Miller/Watertown Daily Times 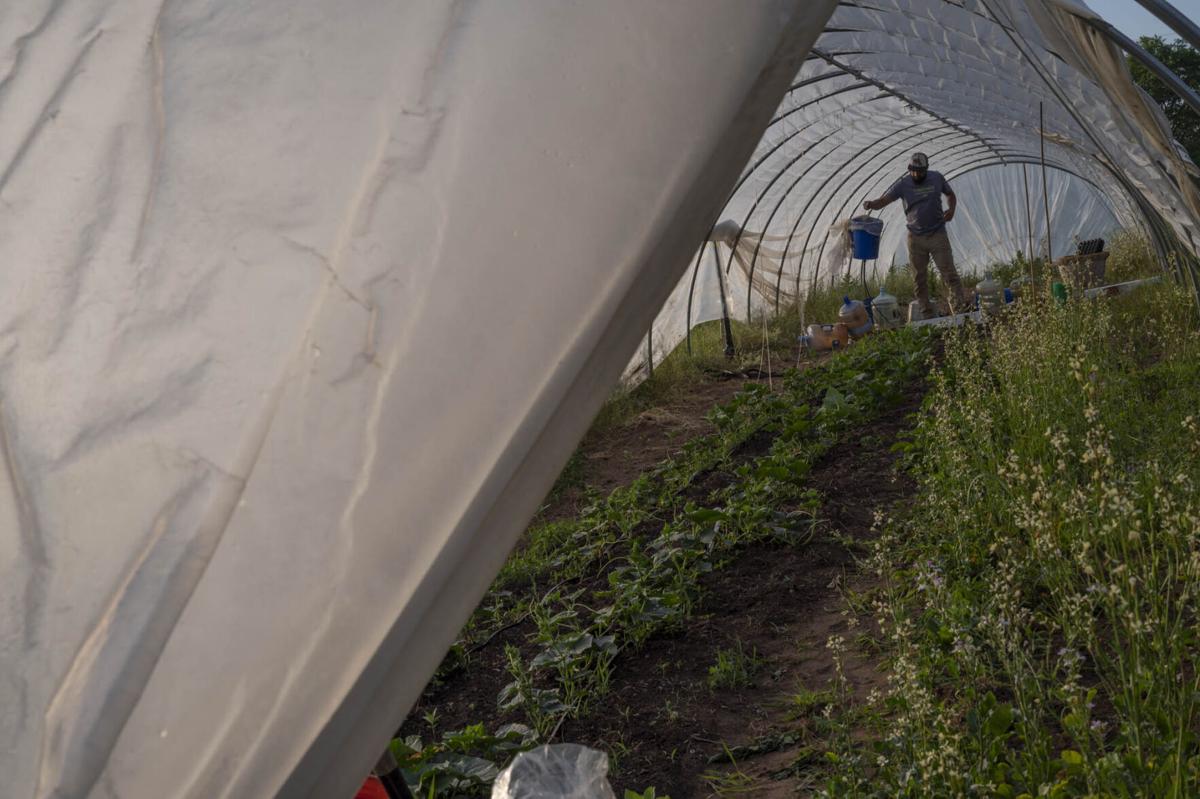 Julian Mangano, of Watertown, sets up a drip watering system, which is the most environmentally sustainable way to water, in his low tunnel at his organic farm, Della Terra in Lewis County on June 23. Lauren Miller/Watertown Daily Times 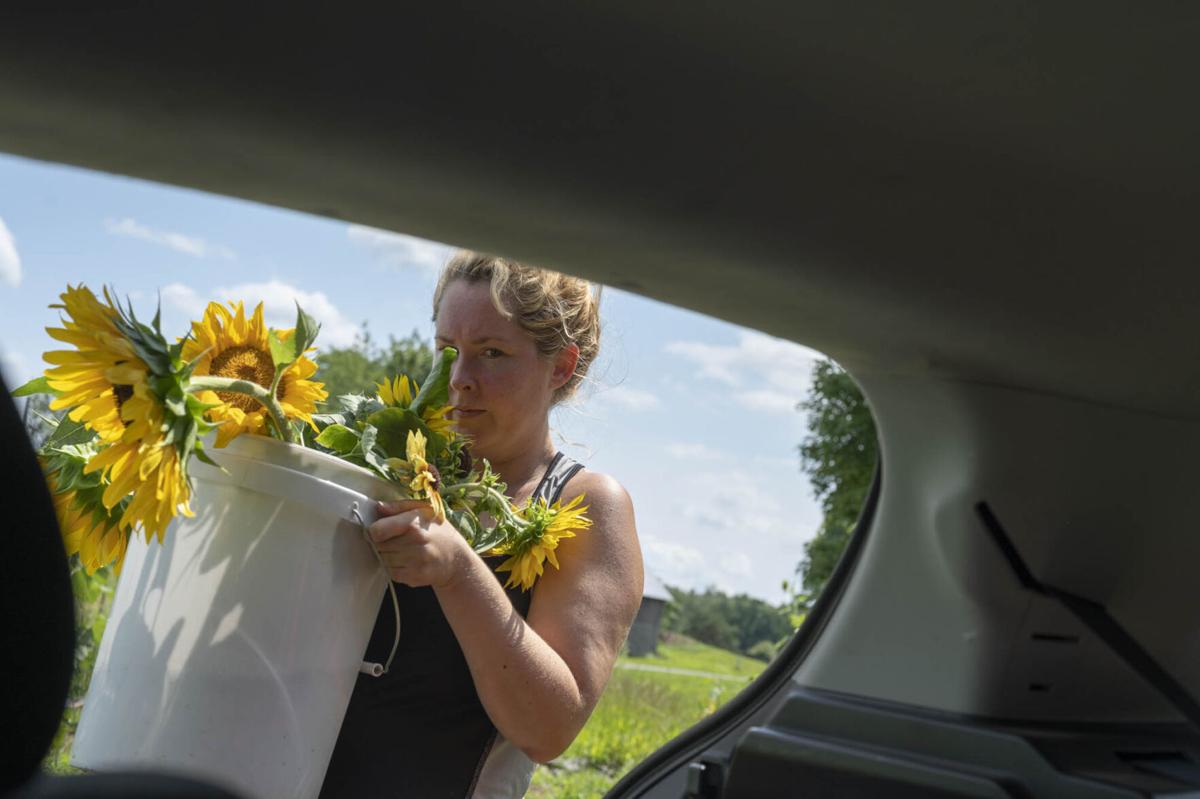 Alice Elizabeth Waite, of Watertown, carries sunflowers she harvested from her farm Della Terra to her car. Ms. Waite then drops the flowers off at a farm stand in Black River, where she prices and sells whatever is produced. Lauren Miller/Watertown Daily Times 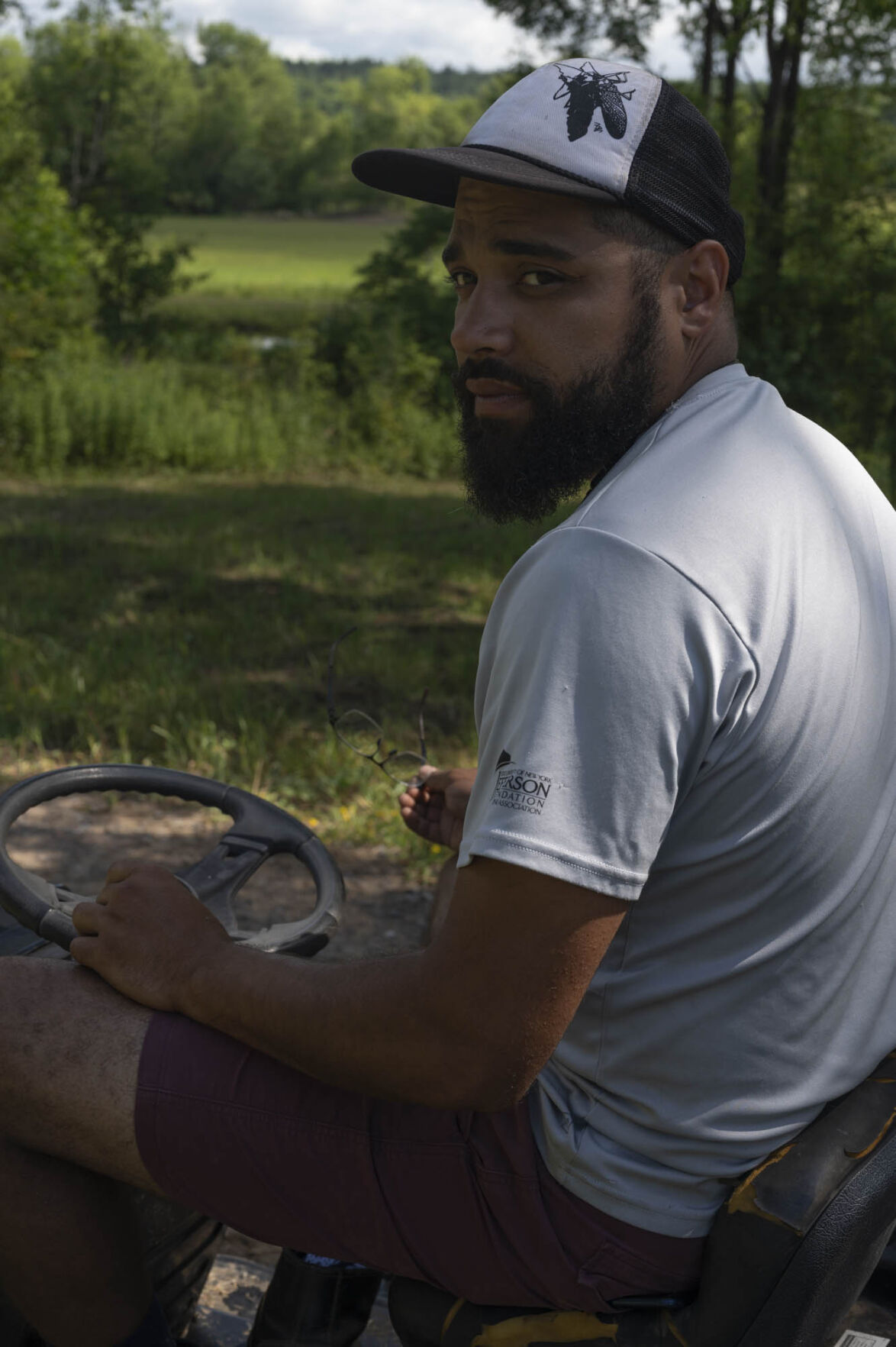 Julian Mangano sits on a riding mowing on July 14 at his farm in Lewis County. Lauren Miller/Watertown Daily Times 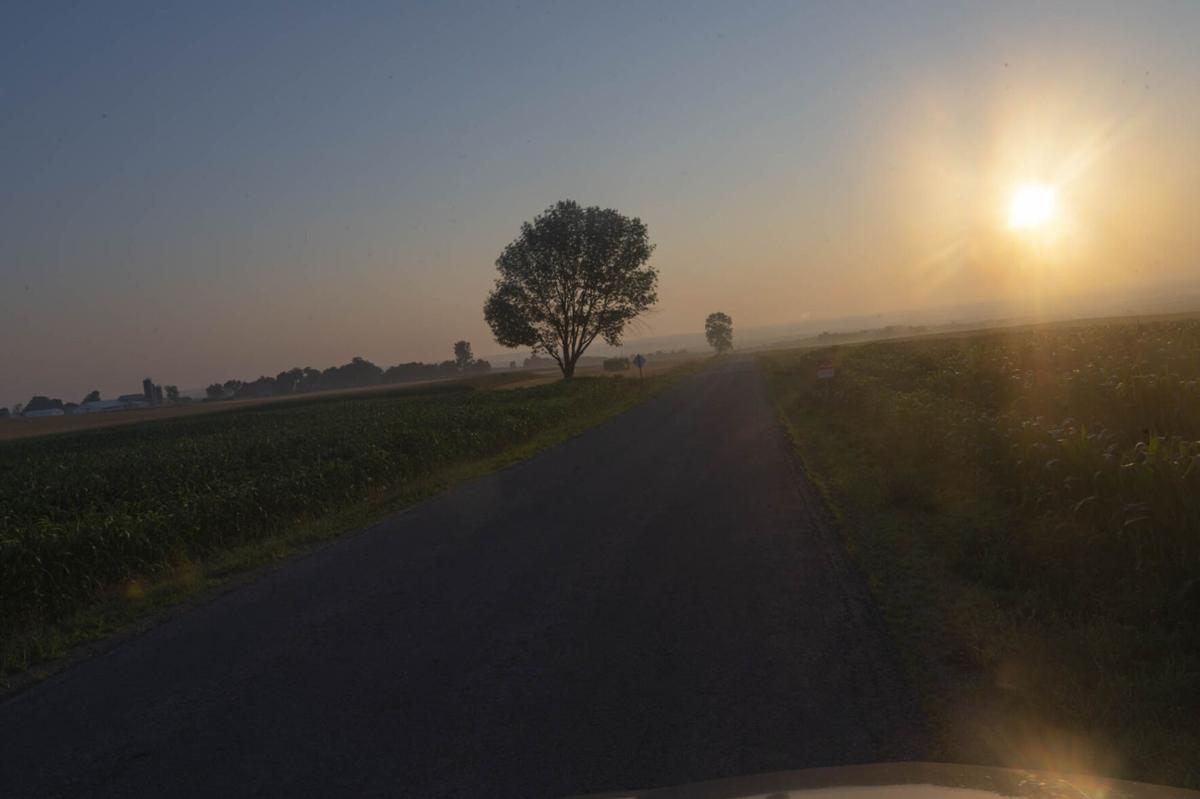 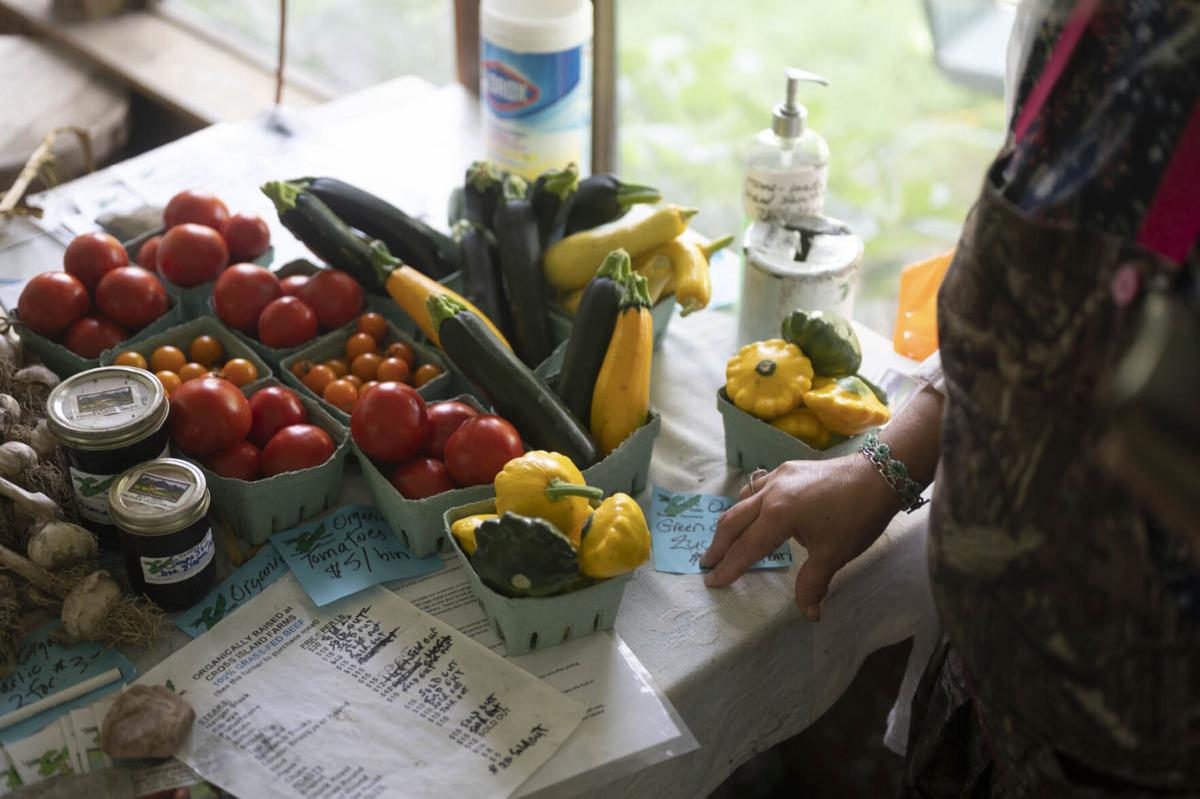 The early morning fog sits just above the crops at Cross Island Farm on Wellesley Island as Dani Baker paces the rows. It’s 4 a.m., which is when she wakes every day to get started on the farm.

The owner of the 15-year-old organic farm used to rely on selling directly to local restaurants. Individual consumers were more likely to shop at the newly opened Price Chopper in Alexandria Bay, rather than visit her farm stand drop.

But with COVID-19, that’s changed. Interest in local and organic food has increased this year.

Ms. Baker thinks part of this change is because people don’t want to go to the store and are thinking about all the people who touched their food before they buy it.

Even before the pandemic, sales of organic products across the nation had been growing, up 5.9 percent from 2018 to 2019, according to OTA Organic. In Northern New York, the few organic food farms in the region have already seen an increase in sales this year.

In short, consumers want to know more about where their food comes from and how it is grown.

According to Jefferson County Agricultural Coordinator Jay M. Matteson, for the first time in many people’s lives, they’re walking into the supermarkets and seeing empty shelves.

During COVID-19, access to food and the normal supply chain, which provides it has been disrupted. What that has meant in Northern New York is that dairy farmers have been dumping millions of gallons of milk down the drain due to a lack of demand. Mr. Matteson said five different dairy farms in the region have had to close permanently due to the pandemic’s strain on the local economy.

With grocery store shelves bare during the early days of the pandemic, “the demand for local food increased dramatically, and I see that trend continuing,” Mr. Matteson said.

Ms. Baker has noticed this trend as well. While direct sales to restaurants and business have fallen, her farm stand sales have done better than ever. Her partner, David Belding, who handles the animals on the farm, sold out of all the organic beef in March.

At Grindstone Farm, a 39 year-old organic farm in Pulaski, Dick de Graff saw his direct delivery sales soar as well. In a normal year, he would have around 80 orders a week, this year he has been averaging twice that and at the peak got 340 orders in a week.

In order to meet the demands without using pesticides, the organic farmers rely on alternate methods.

Ms. Baker uses permaculture on her farm and in her edible forest, which is a method that relies on various plants and trees to attract beneficial bugs and birds and to provide nutrients which help the other crops around it grow. This creates an equilibrium among the plants to allow them to become self-sustaining, so all she has to do in years to come is harvest and manage it.

In their fields at Cross Island Farm, Mr. Belding moves where the cows graze each day so they can fertilize the ground and constantly get new nutrients. Mr. de Graff uses similar methods at his Pulaski farm, choosing the best spots, soils and times of year to grow his crop. He also keeps a rafter of turkeys he uses to help the fields. Toward Thanksgiving, he sells them for meat.

For each of them it’s about working in harmony with Mother Nature, and creating the best, most natural environment for the crops to thrive.

The challenges of organic farming didn’t deter Julian Mangano and Alice Elizabeth Waite, of Della Terra, a small-scale bio-intensive organic market garden in Castorland, who moved to the north country from the Bronx four years ago.

Mr. Mangano always knew he wanted to live a sustainable life. After reading, “The Market Gardener” by Jean-Martin Fortie, which is a book about how to have a financially sustainable life on small acreage, he decided to join the organic farming movement.

It hasn’t always been easy. Right now, for the money and physical labor they put into the farm, they will usually make around $150 per week at their produce stand in Black River. Mr. Mangano works a second job in security at Jefferson Community College in Watertown. He’s also working on growing a compositing operation on the farm and hopes to start providing the farm as a rustic retreat for travelers. His co-owner, Ms. Waite, works on selling and commissioning her art.

Though each farm has seen more direct sales during COVID, they still have to have someone working off the farm to help pay bills. Most of what they make goes right back into the farm.

Mr. de Graff makes root crop washers and Mr. Belding does machine repairs. Each farm also diversified their income by offering things like AirBnBs, campsites and tours, to name a few. They accept it as part of what it takes to be a small-scale farmer, working to make ends meet.

“One year you lose a shirt, and hopefully the next year, you can buy two new shirts. ... That’s just part of it,” he said.

While not easy, the choice to farm organically is a passion for many of the farmers, who believe in creating a self-sustaining, environmentally-friendly lifestyle, which allows consumers access to local, pesticide-free food.

Mr. de Graff was working construction and cleaning up hazardous waste sites when he found out chemicals stored there were the same as the pesticides he could buy at AgWay to spray on his crops.

“If he goes out of business,” Mr. de Graff remembers the speaker saying, “we all deserve to starve.”

Mr. de Graff kept farming with his customers — some of whom have been with him for over 30 years — in mind. Along the way, he has also encouraged more than a dozen others to start farming, such as his neighbors Free Reign Farms.

“People helped me, so I can help other people,” Mr. de Graff said.

Mr. Belding and Ms. Baker have similarly focused their efforts on teaching as many people as possible about the value of organic agriculture.

They hold educational tours on the farm and host college groups from Clarkson University in Potsdam, Hamilton College and St. Lawrence University in Canton. They welcome student interns, and Ms. Baker speaks about her edible forest at organic farming conventions.

“The more people who learn about it, the more they will perhaps incorporate it in their own growth or support it, and all of that supports the environment,” she said.

“Anybody can do it,” she said. “Why not just landscape with edibles that also have aesthetic value so you can actually eat stuff in your yard?”

Mr. Mangano is especially interested in involving young people in creating a community garden and holding education classes about nutrition and agriculture.

Right now the average age of a farmer is 58, and unless younger people start getting interested in farming and particularly small acreage farming, Mr. Mangano worries the food system could fall apart.

In addition to providing healthy food and produce to consumers, these farmers said their belief in the organic lifestyle has allowed them to be more in tune with the earth.

“At the core, life is going to give you what you need; so long as you maintain a positive heart and a closeness with nature, everything will blossom,” Mr. Mangano said. “Even if we never make money, if people start gardening that’s fine.”