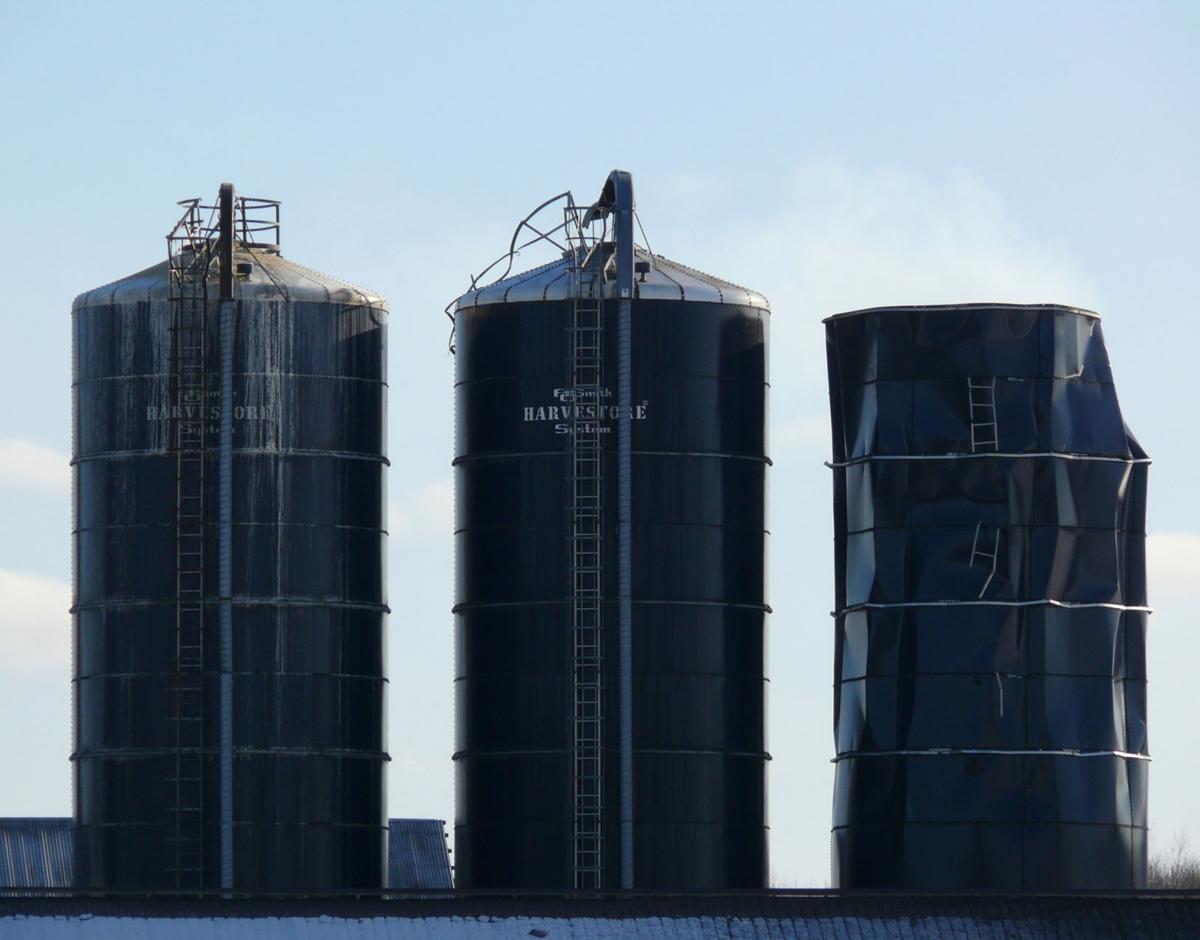 Three silos at the Comley farm. Thirty feet of the silo to the far right blew off the top Saturday night, Feb. 15. Randy Pellis/Oswego County News 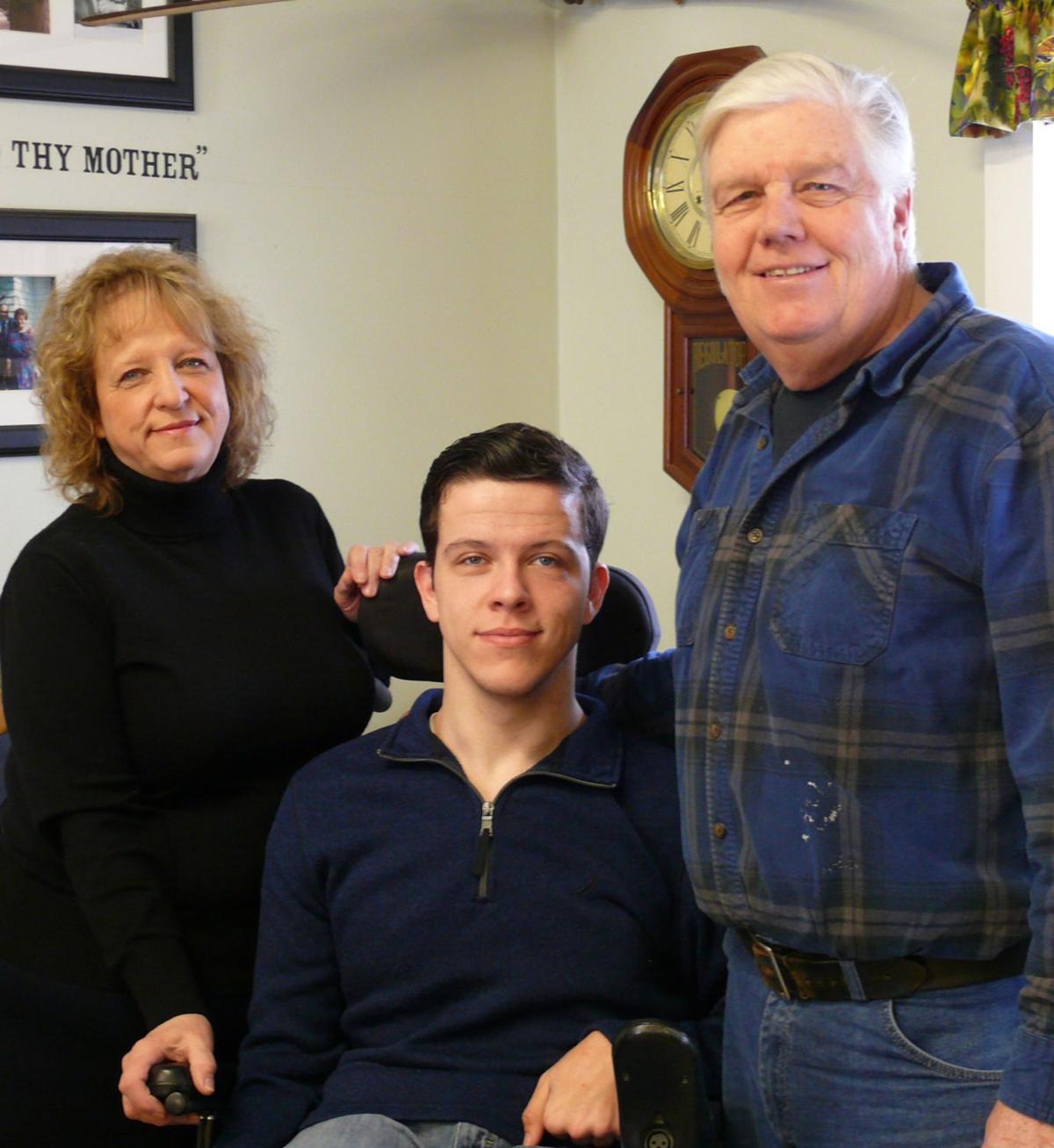 The Comleys from left, Vanessa, son John, and Will. Randy Pellis/Oswego County News 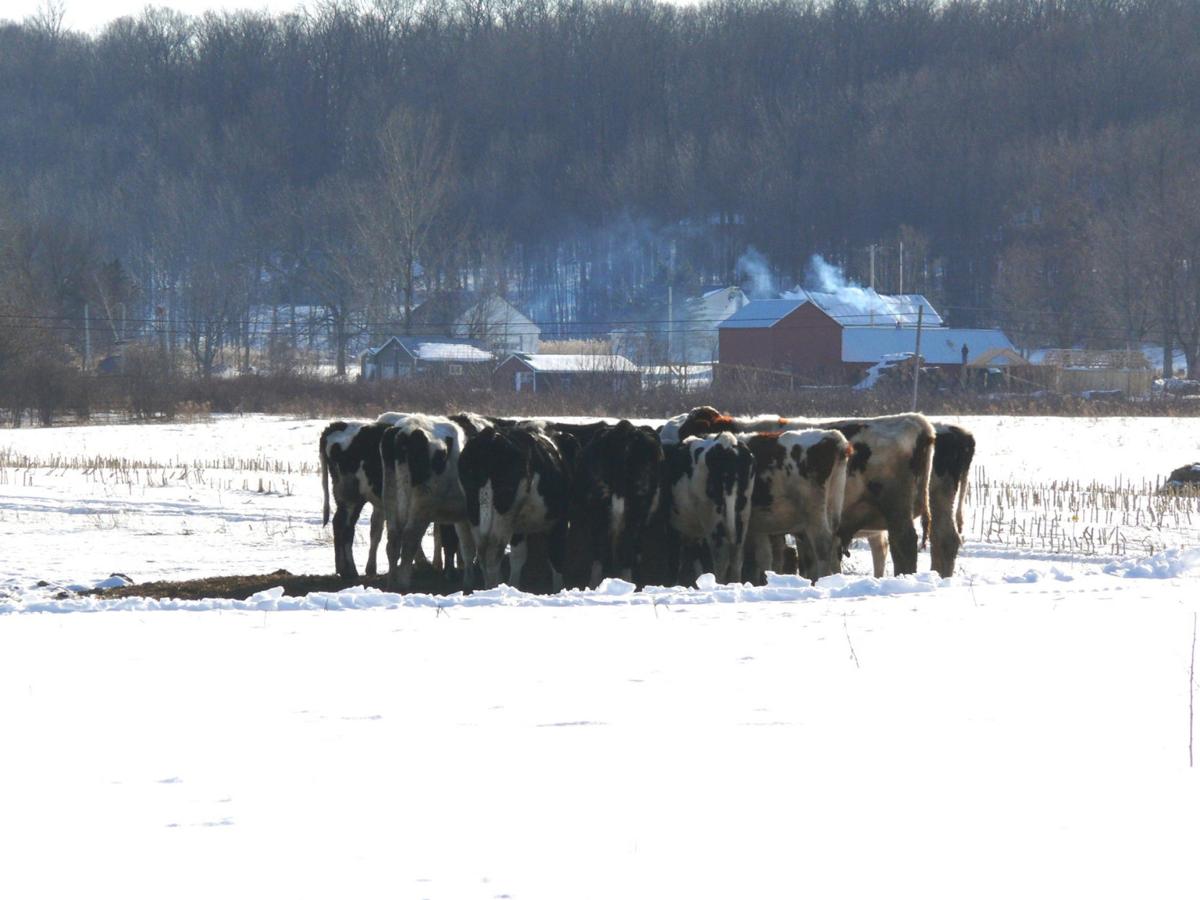 A few of Will Comley’s cows gathered together in the field not far from the silos. Randy Pellis/Oswego County News

Three silos at the Comley farm. Thirty feet of the silo to the far right blew off the top Saturday night, Feb. 15. Randy Pellis/Oswego County News

The Comleys from left, Vanessa, son John, and Will. Randy Pellis/Oswego County News

A few of Will Comley’s cows gathered together in the field not far from the silos. Randy Pellis/Oswego County News

MEXICO – It’s easy to have faith and optimism when you don’t need either. Thirty feet of solid metal blew off the top of Will Comley’s silo Saturday night, Feb. 15, and he still has both.

“Somebody said to me yesterday,” Comley recounted, ”‘I’m gonna start hanging around with you,’ and I said, ‘Really? Are you sure?’ and he goes, ‘Yeah, ‘cause you’ve had some bad stuff happen, but, you know what? Nobody died, cows are okay, you’re still in business. Somebody’s watching out for you.’”

That’s not an easy attitude to maintain in light of a disaster that can set a man and his family back on their heels, and Comley’s not PollyAnnish about it.

He’s already realized some of that help.

“Sometimes you think you’re the Lone Ranger out there,” he said. “But the truth is you’ve got a lot of friends and a lot of people who care. We’ve had a lot of calls from companies and friends and acquaintances and neighbors, ‘Hey, is there anything we can do? Be happy to help you.’ That’s a good thing. When tough things happen, that’s a good thing to have happen. So, grateful for that.”

The silo held 600 tons of haylage, “chopped hay that’s halfway between green and dry” to feed his 65 milking cows along with the young stock and a few others into spring.

He said he’ll replace the feed “one way or another.”

He does have some form of food in reserve.

“We have some dried hay. We have some corn silage, but I’ll need feed to get through this situation,” he said.

“You just need to get up every morning and figure out the day.”

There was no insurance on the silo.

“These haven’t been great times for dairy farmers,” Comley said, “and generally, these things don’t happen to silos. Of course, I have insurance on my cattle and the buildings and everything. But it’s one of the things you save on maybe when times are tough. Maybe I should have done it different.”

The silo can’t be repaired. “It’s scrap metal,” said Comley. “It blew 30 feet off the top of the silo, and it’s still smoldering in there.”

Whatever’s left in the silo “is not good feed,” he said. “In the spring we’ll probably take it (the silo) down and scrap it.”

The force of the explosion blew a picture off the wall in son John’s room, hitting him in the head.

“It was a powerful explosion. People tell us it was very strong in Hastings, Pulaski. People told me they came out of their homes to see if the nuclear plant was still there. Some people in Hastings were pretty sure an airliner crashed.

“We have a great fire department, and if there was something I thought they could do, I would have called them. The only reason I didn’t was ‘cause I got out there quick, checked the barn to see if the cows were okay, and there were no fires or anything. That was my first thing. And once I determined that the cows were okay and there were no fires, there wasn’t a lot anybody could do really. I didn’t want to get the fire department out here in the middle of the night and stand around and say, ‘Well, I guess everything’s okay.’ It didn’t seem to make sense to me. It was a terrible thing that happened, but after it happened, it was done.

“There’s lots of people who think that they know why it happened,” Comley said, “and there are a lot of opinions. The forage wasn’t too dry. I had just taken a forage sample, and it was right where it should be. It was the ideal moisture. I don’t have a lot of answers. I’d love to tell you I know exactly why this happened. I don’t. I’m not the first. When I first moved here (almost 12 years ago), there was one up in Sacketts Harbor blew the top off, and there were some others, a guy in Booneville, did the same thing as mine. Once it happens, you hear about some other instances.”

There’s no denying this was a major economic blow for the Comleys.

“So, it’s a loss, but you know what? Could have been fatalities. I was standing beside that silo that afternoon. I was right there.”

Maybe somebody is looking out for Will Comley. He’s still in business, and he’s hoping the business will grow, though not in the size of his farm or the number of his cows.

He doesn’t want more cows. “I’m happy with where I’m at,” he said. “I’d like to have more customers.”

Rather than get larger, Comley’s Country Creamery at 103 Fraser Rd. in Mexico has gotten more personal.

“We decided instead of expanding, we’d like to connect with our own customers who look me in the eye and know I’m telling the truth about what I have, and my cows, my farm, whatever I do, whatever practices I have, they can have confidence in me. I don’t do any hormones. We graze as much as possible. I try to keep the cows as healthy as possible.

And he’s proud of the way his milk is made, proud of what’s in it and what isn’t, and proud his milk has a higher butterfat content than the standard government-regulated 3.25% butterfat found in the usual store-bought whole milk.

“We don’t use chocolate syrup or corn syrup,” he said. “It’s just some sugar and very expensive cocoa and milk, and that’s it.”

Comley pasteurizes his milk but he doesn’t homogenize it. The cream floats to the top.

Aside from the store they’ve set up at the farm, they’re in seven stores throughout the county: Ontario Orchards, Scriba Meats, Buttercup Cheese in Central Square, Speedy’s truck stop, Mapleview Market, the General Store in Pulaski, and Colosse Cheese. He delivers all the milk to those stores. And he’s trying to get his milk in others. “I hope we get in 50 stores,” he said.

“You do what you gotta do to survive,” he said, but when you look around his store you see one message after another of love and faith and kindness, and when you talk with them you feel that goodness, not the one or two-percent variety, but the whole milk kind with cream on the top, and you realize the Comleys are more than survivors, they’re models of what people can be.