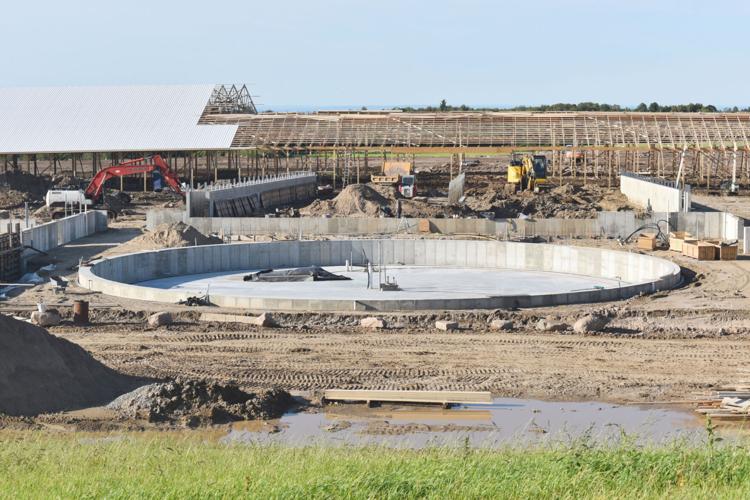 Work is moving along on the rotary milking parlor at Bilow Farm, as seen Thursday. Richard Rosentreter/Malone Telegram 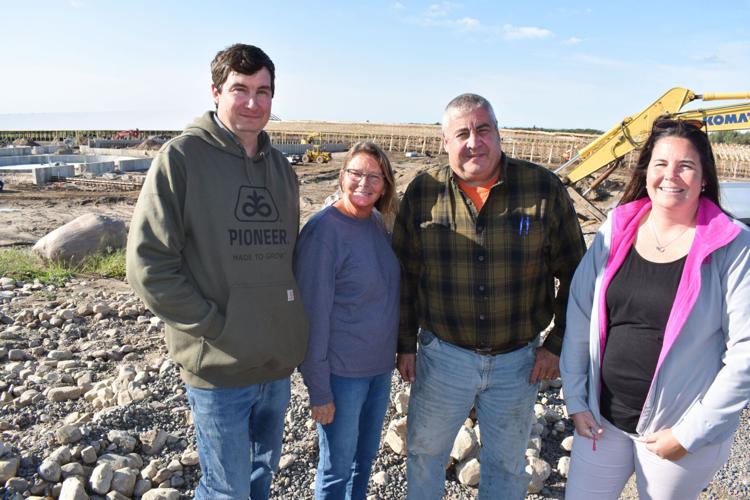 Trudy and Vincent Bilow, at center, owners of Bilow Farm on County Route 24 in Malone, are flanked by their children Andrew and Jessica Kelley in front of the farm last week as construction continues on its large expansion project that will include a 100-cow rotary milking parlor and two large barns. Richard Rosentreter/Malone Telegram 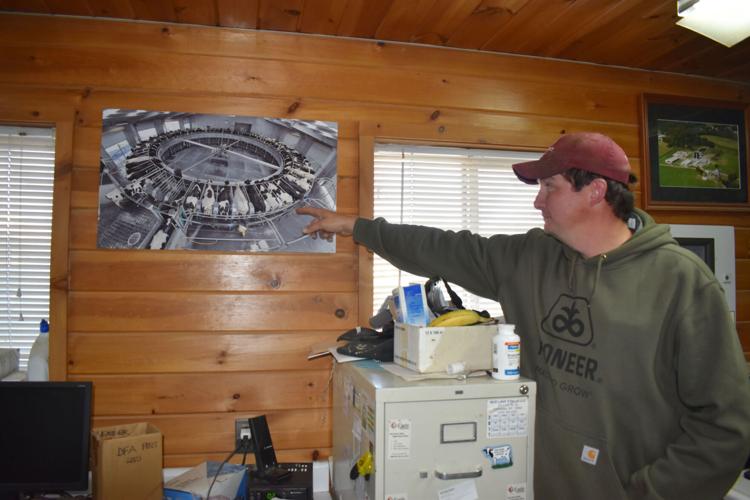 Andrew Bilow points to a photo of a rotary milking parlor similar to the one being built on the family dairy farm. Richard Rosentreter/Malone Telegram 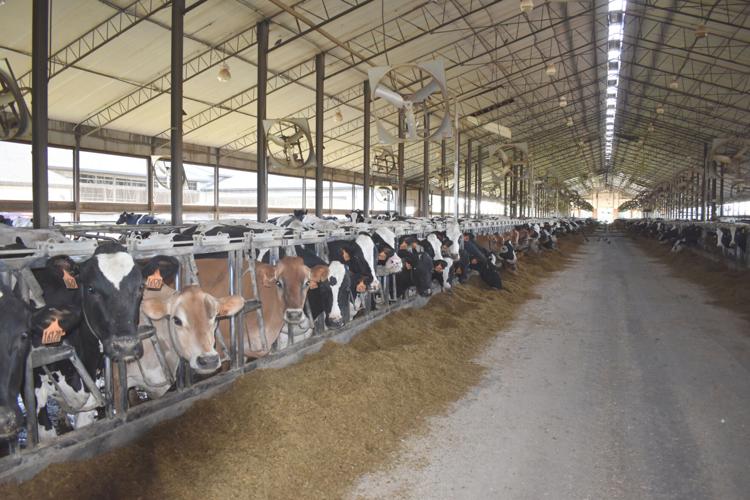 These cows at Bilow Farm will be moving into a new barn when the expansion project is complete. The new rotary parlor should be able to milk 750 cows an hour. Richard Rosentreter/Malone Telegram

Work is moving along on the rotary milking parlor at Bilow Farm, as seen Thursday. Richard Rosentreter/Malone Telegram

Trudy and Vincent Bilow, at center, owners of Bilow Farm on County Route 24 in Malone, are flanked by their children Andrew and Jessica Kelley in front of the farm last week as construction continues on its large expansion project that will include a 100-cow rotary milking parlor and two large barns. Richard Rosentreter/Malone Telegram

Andrew Bilow points to a photo of a rotary milking parlor similar to the one being built on the family dairy farm. Richard Rosentreter/Malone Telegram

These cows at Bilow Farm will be moving into a new barn when the expansion project is complete. The new rotary parlor should be able to milk 750 cows an hour. Richard Rosentreter/Malone Telegram

MALONE — These days it’s not uncommon to read reports of dairy farms across the nation hitting hard times due to inflation, supply chain issues and drought, but one local farm is bucking that trend and has embarked on a large-scale expansion project that is slated to be completed early next year.

Bilow Farms, a family-operated dairy farm on County Route 24 in Malone, is in the midst of a $25 million expansion project that will include a rotary milking unit able to handle 100 cows at a time, and two new barns, each about the length of five football fields. The farm owners have also partnered with a company called Rev LNG that is investing $20 million and will turn methane gas generated from cow manure into renewable natural gas — making the total project a $45 million endeavor. The project will also include an observation area for people to view the operations during tours of the facility.

The farm is owned by Vincent and Trudy Bilow — their son Andrew works full time at the farm and their daughter Jessica Kelley manages the books and does community outreach for the farm in her spare and vacation time. She works full time teaching fourth graders at St. Joseph’s Elementary School.

“We’re going to be ultra-modern. We’re also going to have large groups of farmers coming in touring the facility. It’s going to be a tourist attraction for Northern New York,” Vincent said, adding that the manure gas aspect of the project is going to reduce the farm’s carbon footprints. “And that is what consumers today want to hear. It’s good for the environment.”

The project has been in the planning stage for two years and got off the ground in April, and the Bilows were able to do that with the help of a loan through Farm Credit East.

“It probably won’t be completely done until late 2023 or early 2024. There’s a lot to this,” Vincent said. “We’re doing this on our own. We have no grants for this at all. We have no outside investors.”

The centerpiece of the project for the Bilows is the rotary milking parlor, which will help the farm operate more efficiently with its manpower.

“When that is up and running, our goal is to milk 750 cows an hour. It’s set up for the efficiency of what we’re doing, and that goes back to the labor part,” Andrew said. The cows step on the parlor and ride it around while getting milked. Once they get around they will exit it and return to their group to eat and rest.

“It’s like a merry-go-round. It rides on a circle,” Jessica added, explaining that the central building will also house the main office of the dairy farm along with the public viewing zone.

“Sometime in the spring of 2023 we’ll be milking,” Vincent said, adding that right in front of the rotary milker will be the main farm office and the observation area, which will give the farm a new look. “Even though it’s a dairy farm, it’s not going to look like a dairy farm in the front. Our image is very important to us.”

Over the years as a family livelihood, dairy farming has become a passion for both father and son.

“It’s in our blood,” Vincent said.

“When you do something and grow up with it, that’s what you do,” said Andrew, who takes care of the cows and calves all day. “When I grew up, I was in the barn all the time taking care of the calves, and then it transitioned to heifers and cows.”

Jessica said that while she was growing up, she didn’t do much work for the farm, but in 2015, she started helping out in the office. These days, one of her primary objectives is doing community outreach and trying to bring in more field trips to educate the community, including schoolchildren.

“We’re big on community outreach, because at some point, everybody knew somebody who had a farm,” she said. “Now when you ask a kid ‘Have you been to a farm?’ they answer ‘No.’ There’s such a big gap now where kids don’t go to a farm or they’ve never been to a farm or know what goes on at a farm.”

One thing about the dairy farm is the changes that have taken place as far as how the cows live on a daily basis. Prior to 1999, Bilow Farm used tie stalls, which is a form of housing in the dairy industry where cows are tethered to their stall. The farm has since moved to a freestall housing system, which provides a comfortable place for dairy cows to lie down and rest.

The size of the farm also grew — and in 2015, the Bilows bought a farm in Oriskany Falls, and the total number of cows is approaching 4,000, with about half of them at the Malone location. Vincent said that once the new barns are completed, all the cows from the other location will be moved to Malone.

“Currently we’re milking about 800 cows at that location, but there are more on site. All those cows will be coming here,” Vincent said. “We want to bring everything back home (to Malone) for labor efficiency.”

Vincent said that once the project is complete and all the cows are in place, he expects to add about 80 more jobs at the local dairy farm.

“Our goal is to create jobs in the barn that are 40-ish hours in a week. We’re trying to create good-paying jobs but people don’t have to work 60-70 hours per week,” he said.

Being a family operation is good as it keeps the family together, and although it’s not always perfect, the family has plenty of pride in being a close-knit unit.

“I think it’s great,” Trudy said. “People don’t realize that even though it’s large, it really is still a family farm.”

“I look at it when I started to where I am, and I’m super proud. It makes me smile. I’m hoping that our grandsons and granddaughters will get involved with the farm,” Vincent said. “It’s a sense of pride. I don’t know about the future and where it’s going to go, but this is my future right now.”

“It has its challenges, but it has its rewards. At the end of the day, we’re still a family,” Andrew said, adding that he’d love to keep the family line moving with his daughter getting involved. “I’d like to think maybe she’ll get involved with the farm but she’s only 5 now.”

“It also goes back to what people have said that this is a large farm and it’s not a family farm, but it still really is a family farm,” Jessica said. So far, she said her oldest son is most interested at this point, and that during the summer her kids are at the farm and enjoy hanging out with the calves.

Vincent said that having a farm this big is harder for the grandkids to do what his children did while they were growing up on the farm, mainly due to the increased amount of equipment.

Trudy said that when Andrew was little, he’d say “I’m going to the barn with dad,” and she wouldn’t have to worry about it. That’s not the case anymore.

“Back then they could go into the smaller barn, but now we have equipment running. Safety is always a main concern for us,” Vincent said.

When the project is completed, a connection will hopefully be made between the farm and its ability to teach both young and old not only about farm life, but all the aspects of a modern farm.

“I think it will make me feel proud to have some of the kids, and even some of the adults that stop by, go home and have a better understanding of what we do and we do a good job caring for our animals,” Vincent said. “Our motto at Bilow Farm is that cows come first. It’s very important to treat our animals well.”

“People who have never been on a farm people just don’t know,” Trudy said, and then described an interaction that epitomized the lack of knowledge. She said that some kids from the city were visiting the farm and she had the task of making breakfast.

“Our daughter said, ‘Oh, wait until you try the bacon we have here,’ and one of the kids replied to her ‘No, I’m not eating that, it’s not from a store.’ So I asked, ‘Where do you think the milk comes from?’”

For the Bilow family, the project marks another chapter for the dairy farm, and one that continues to build long after the project is finished.

“This is all I’ve ever done. We wouldn’t be doing this if we didn’t enjoy it,” Vincent said. “It’s a long way from being done. I just look at it as this is what we do. We just want to supply a good wholesome product to the consumer.”