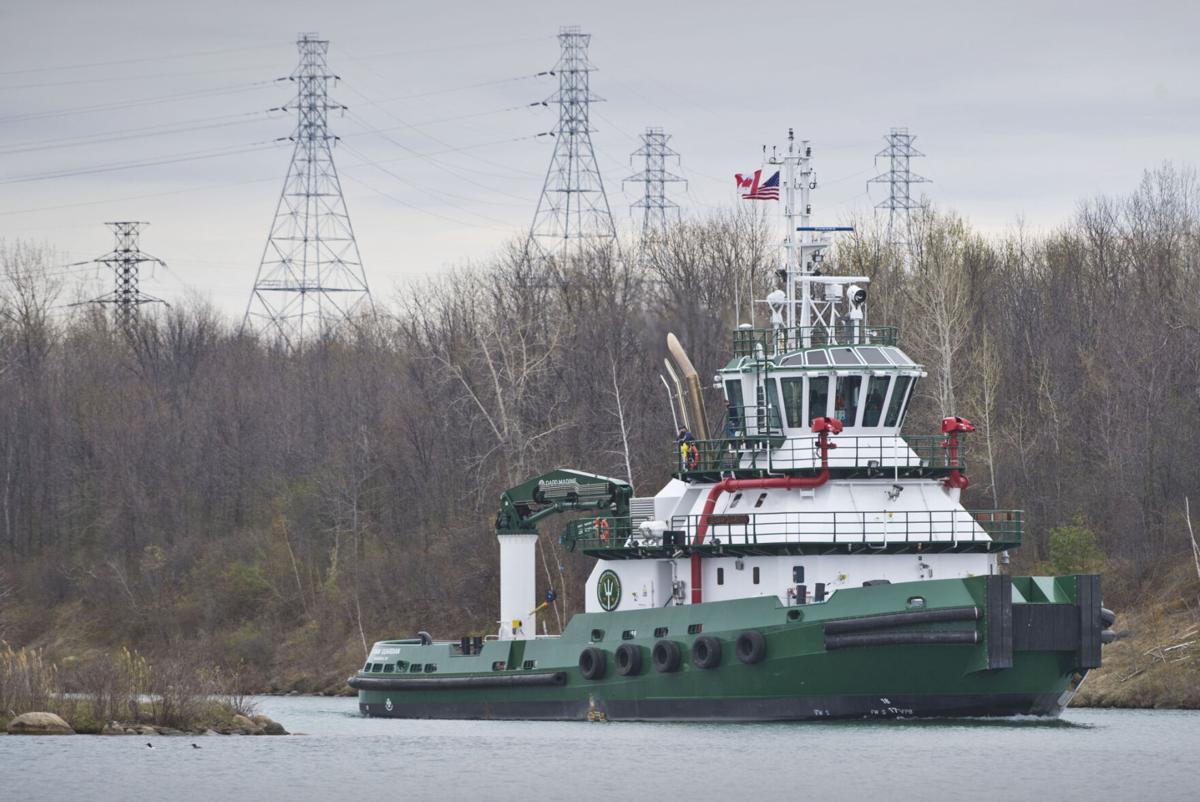 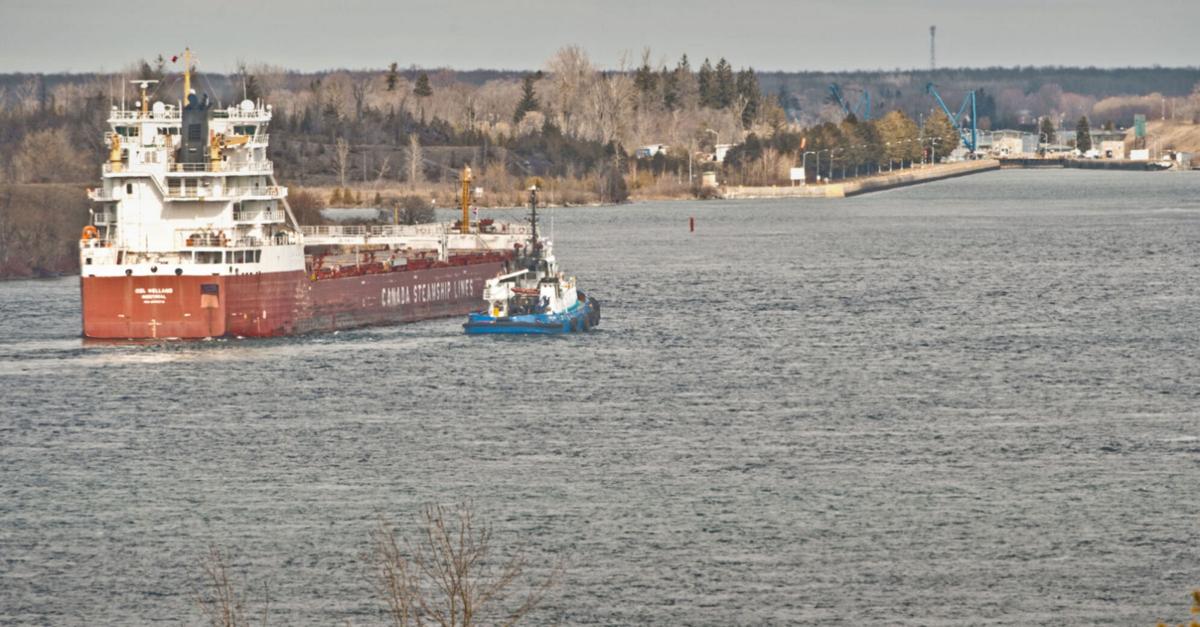 CSL Welland is escorted to Iroquois Locks gauging station by the tugboat Ocean K. Rusby on April 1, 2020, the first day of the shipping season on the St. Lawrence Seaway. Christopher Lenney/Watertown Daily Times 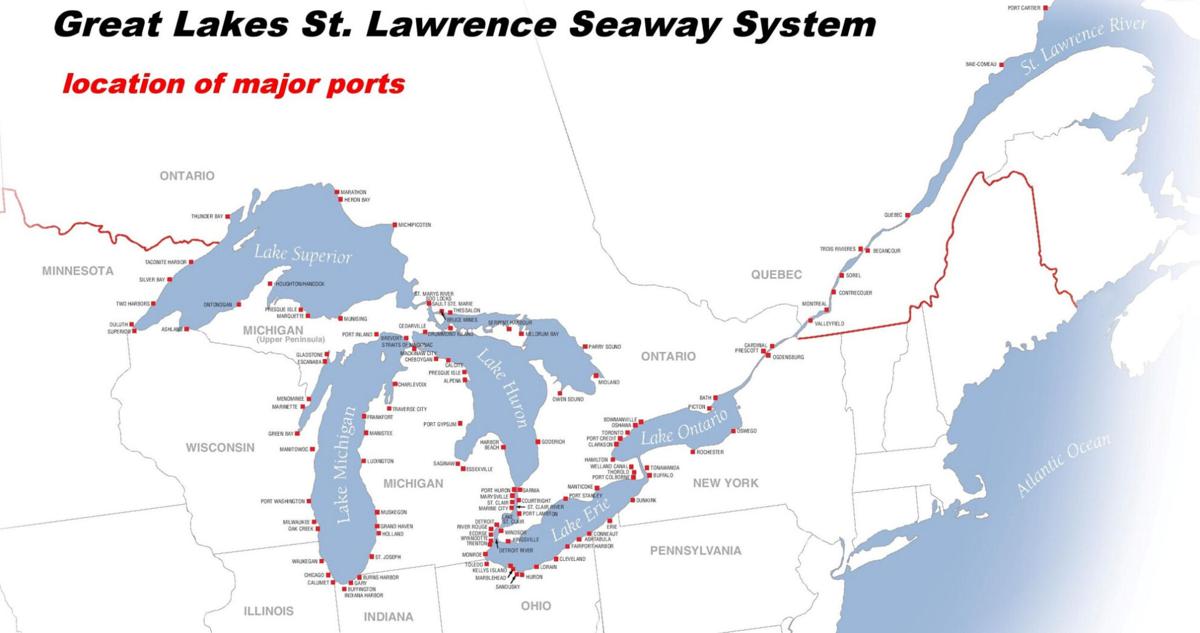 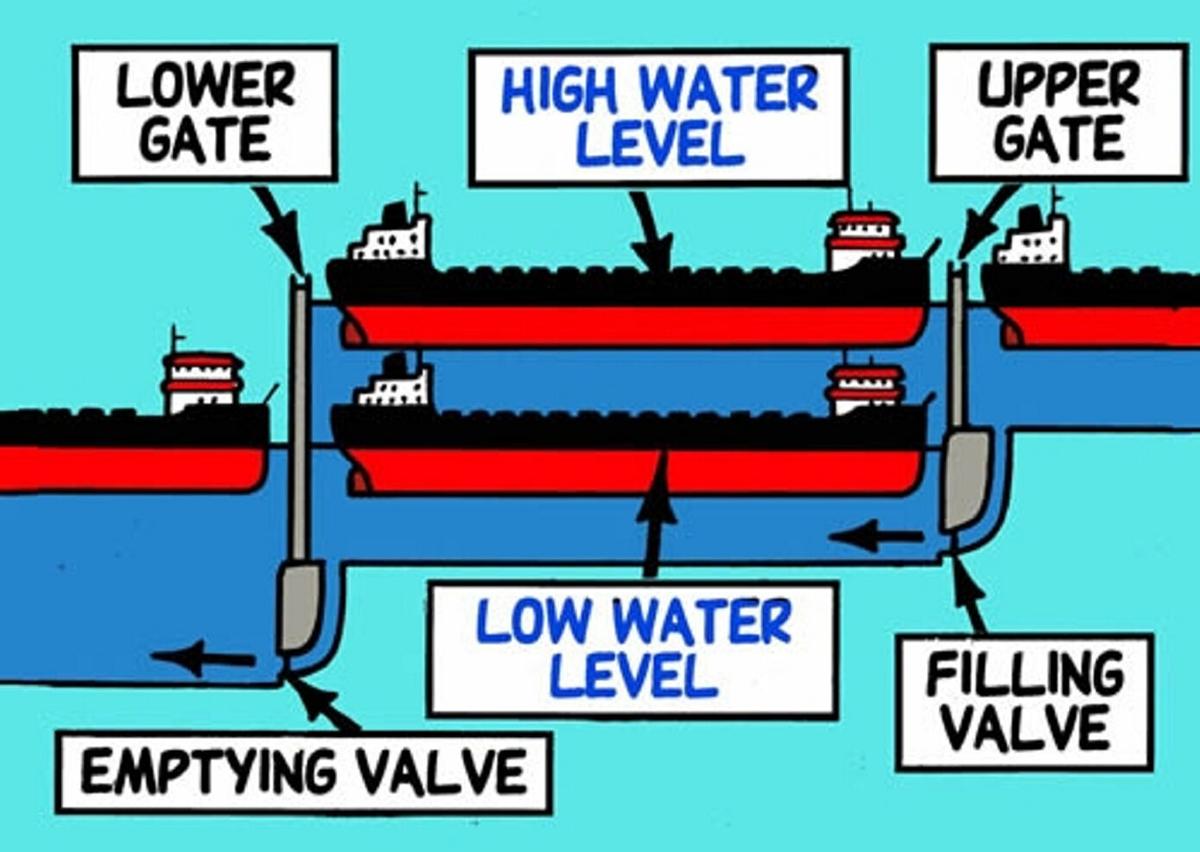 A system of locks lifts and lowers vessels a total of 600 feet from Montreal to Lake Superior along the Great Lakes-St. Lawrence system. greatlakes-seaway.com 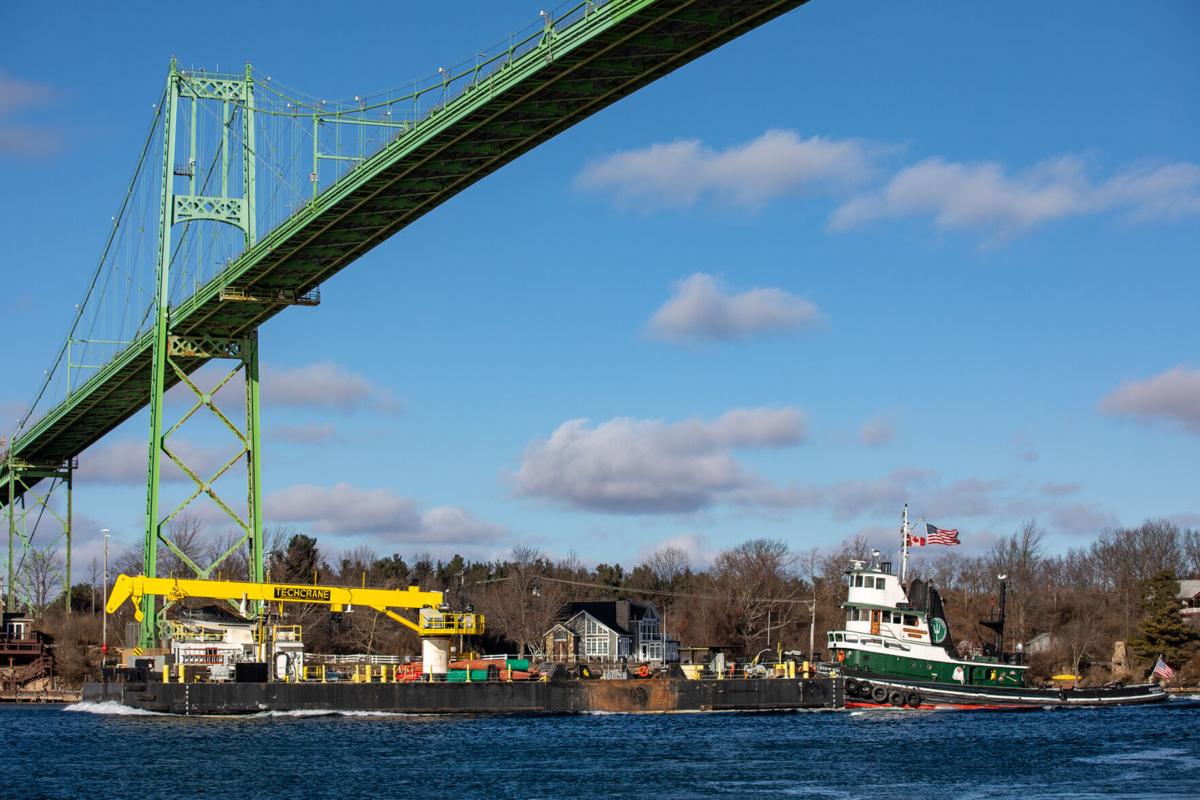 CSL Welland is escorted to Iroquois Locks gauging station by the tugboat Ocean K. Rusby on April 1, 2020, the first day of the shipping season on the St. Lawrence Seaway. Christopher Lenney/Watertown Daily Times

A system of locks lifts and lowers vessels a total of 600 feet from Montreal to Lake Superior along the Great Lakes-St. Lawrence system. greatlakes-seaway.com

The chief executive officer of the American Great Lakes Ports Association likes to use an airport analogy as a way of pointing out what happens when the shipping season opens and concludes each year on the five lakes and St. Lawrence Seaway.

“Can you imagine if you flew across the country, connecting at different cities, and some airports were open and some not?” CEO Steven A. Fisher said. “You can rely on some and not others? It’s a bit chaotic.”

But that’s what shipping companies and industries are facing along the Great Lakes-Seaway system, Mr. Fisher said.

“The Great Lakes and the St. Lawrence Seaway are many things, but among the many things they are, they’re a transportation system,” Mr. Fisher said. “If you look at it as a transportation system, we have a total of 16 locks that a ship has to pass through as it comes into the Great Lakes from the Atlantic Ocean, sailing up the St. Lawrence River, into the Great Lakes. If it goes all the way to Lake Superior, it has to pass through those 16 different locks.”

And at the beginning and conclusion of the shipping season, those locks are on different schedules of opening and closing.

“That strikes a lot of people in the business community as being odd and also it tends to make the waterway and the transportation system less reliable because it’s not open at the same time,” Mr. Fisher said.

The 2020 navigation season of the Seaway closed on Dec. 31; effectively, all vessels had to be clear of the Montreal-Lake Ontario section at noon on Dec. 31.

The opening of the 63rd Seaway season this year was on March 22.

“It’s a discretionary date each year influenced by many things, but it’s hard to plan against because it’s not a fixed date,” Mr. Fisher said.

A ship transiting the Seaway’s 15 locks from Montreal to Lake Erie crosses the international border 27 times as the U.S. Department of Transportation and Transport Canada work together to manage the transit system.

The system of locks is necessary to lift and lower vessels a total of 600 feet from Montreal to Lake Superior.

In Northern Michigan, the Soo (also spelled Sault) Locks, are a set of parallel locks, operated and maintained by the United States Army Corps of Engineers. They are often referred to as the “Linchpin of the Great Lakes” because the locks, which allow traverse along St. Marys River, enable vessels to travel between Lake Superior and the lower Great Lakes and St. Lawrence.

The Soo Locks, unlike other locks in the system, can be depended to open and close on the same dates each year: They are closed from Jan. 15 to March 25 annually for repairs.

Mr. Fisher believes the other locks in the system should follow the Soo Locks schedule.

“We have all these different entities running these locks and they are setting the opening and closing dates according to different criteria,” Mr. Fisher said. “We believe they should be harmonized — that the shipping system should be opened all at the same time and closed at the same time.”

Mr. Fisher said that doing so would “result in a more reliable shipping system that is more economically prosperous.”

The main criteria in the annual closing of the locks is for maintenance.

“Clearly, those areas in Northern Michigan are as cold as anywhere on the system,” Mr. Fisher said. “What’s curious to us is why the Army Corps of Engineers are able to keep those locks open in those conditions, yet the U.S.-Canadian Seaway managers aren’t able to keep their locks open in conditions that are certainly no colder than those very frigid areas of northern Michigan. The Corps of Engineers manages to get their maintenance done during the shorter closure period.”

At the end of the 2020-21 commercial navigation season, the Welland Canal remained open for an additional seven days. As usual, the Montreal-Lake Ontario section of the St. Lawrence Seaway closed on Dec. 31.

This yea's extension pilot project on the Welland Canal saw it remain open through Jan. 7.

This is the third year for the pilot project.

Each day of an extended season makes for better economics for shipping companies and the industries that rely on the Great Lakes-St. Lawrence system to ship goods, Mr. Fisher said.

“We’re moving 140 tons of cargo a year on the Great Lakes,” he said. “For two or three months a year, we completely shut down. That’s a lot of stuff that isn’t moving for those months. We think the longer you can keep goods moving by water, it’s a more environmentally friendly way to move those goods with a lot less societal interaction.”

Asked by the Times to comment on the idea of aligning the Seaway lock schedule with other locks in the system, a U.S. Seaway spokesperson responded in a statement: “While we are always examining ways to better utilize the Seaway’s infrastructure, we need the winter work period to repair our infrastructure and perform routine maintenance. As far as we know, the analysis of the St. Lawrence Seaway Management Corp. pilot project at the Welland Canal is not completed yet, as it is a multi-year project. We have no plans to do a similar assessment for our sector of the Seaway.”

“We figure better aligning with the U.S. locks in the Soo with the U.S. Army Corps of Engineers allows for better planning,” he said. “Having that alignment, you know what your season looks like and you could plan around it.”

He said he welcomes the pilot project on the Welland Canal.

“I think technology has changed and it’s been proven you can operate in the harsher conditions,” Mr. Bravener said. “The extension of the Welland Canal (season) is starting to prove that out. Sault Ste. Marie is in very harsh climate, and they operate successfully until Jan. 15 of every year.”

About 90% of America’s iron ore moves through the Soo Locks, its managers say. But Mr. Bravener said that the grain trade coming out of the U.S. and Canada and loaded on Lake Superior ports was very strong last year.

“Particularly, Thunder Bay had their strongest year in recent history,” he said. “It portends to be another strong year if the crop is good this year.”

Mr. Bravener said it would take less than a week for a ship to travel from Thunder Bay in northwest Ontario on the shores of Lake Superior to Montreal.

“To get out of the Seaway now, you have to have the vessel loaded before the 24th of December,” Mr. Bravener said. “If you haven’t left Thunder Bay by that time, you’re not getting out.”

Mr. Bravener and Mr. Fisher don’t think a two-week extension of the Seaway system — to match the schedule of the Soo Locks — would have a negative environmental impact.

“It’s the most environmentally friendly way of moving bulk materials over long distances,” Mr. Bravener said. “The longer we can operate that marine highway is more trucks that we’re able to take off the road.”

Global warming is opening up world shipping avenues unheard of decades ago. Northern sea routes in the Arctic are opening. The Arctic Council reported that ships entering the Northwest Passage area increased 44% from 2013 to 2019. Some of the most common ship types to navigate the area include bulk carriers, general cargo ships, fishing vessels and cruise ships.

“I think we could see more economic activity as far as shipping on the Great Lakes if, in fact, global warming did lead to a longer shipping year,” Mr. Fisher said.

But the executive director of Save the River, John Peach, is cool to the idea of extending the shipping season on the St. Lawrence, even for two weeks.

“Save the River’s thoughts are that would be a mistake,” Mr. Peach said. “That period in December, especially late December, is a time when water is historically very low. And you get the high winds that come in with the winter storms. It’s a difficult time for shipping.”

There would also be “icing conditions,” Mr. Peach said.

“Heaven forbid if there’s ever an accident or spill,” he said. “It’d be very hard for first responders to get out there and operate safely. When you do have an accident, you’ve got to get people out there, you’ve got to get boats in and out of the launch pads and ramps around the area. It’s icy water, it’s low water and it’s dangerous.”

Since 1978, Save The River has been the leading grass roots advocacy organization working to protect the St. Lawrence River. Its signature start-up program was to advocate against year-round shipping on the St. Lawrence, an idea that has generally been abandoned.

“In December, it can get very treacherous,” Mr. Peach said. “Two weeks just makes it worse.”