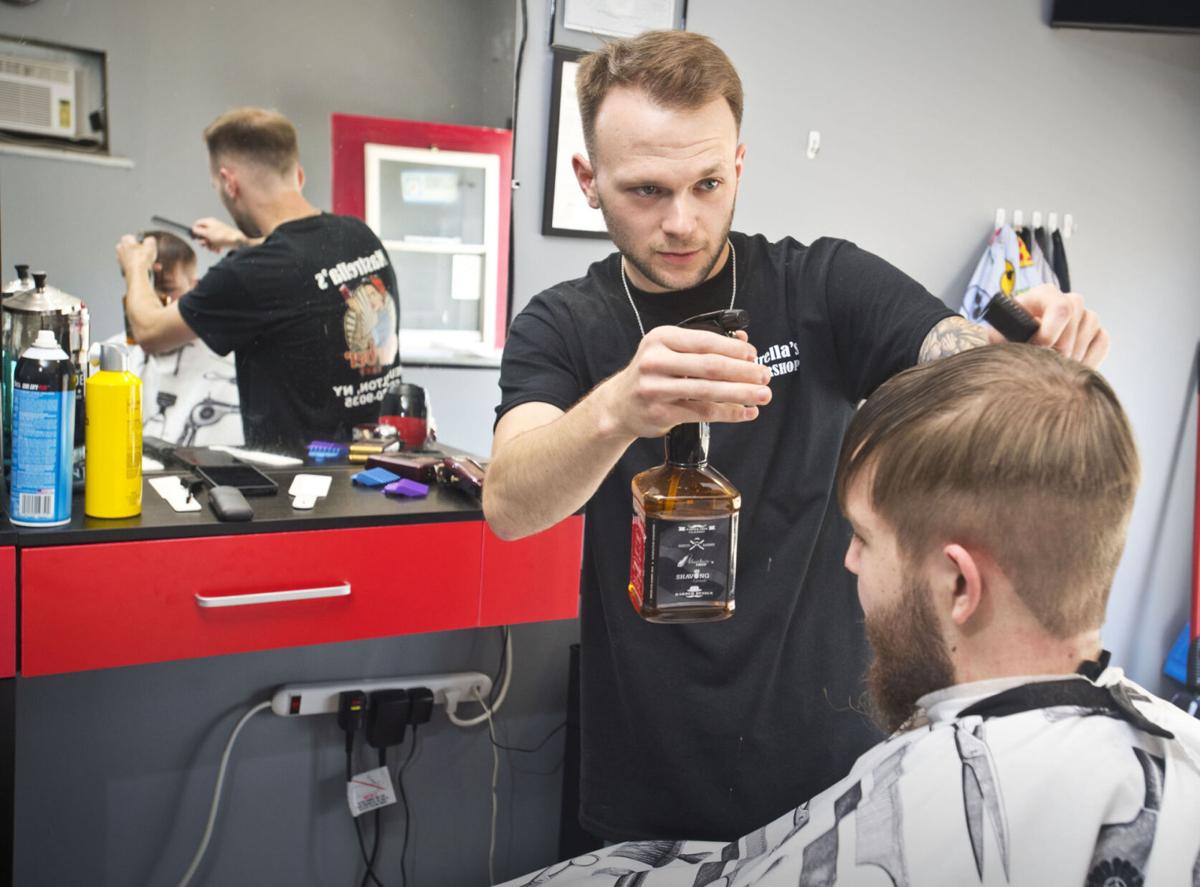 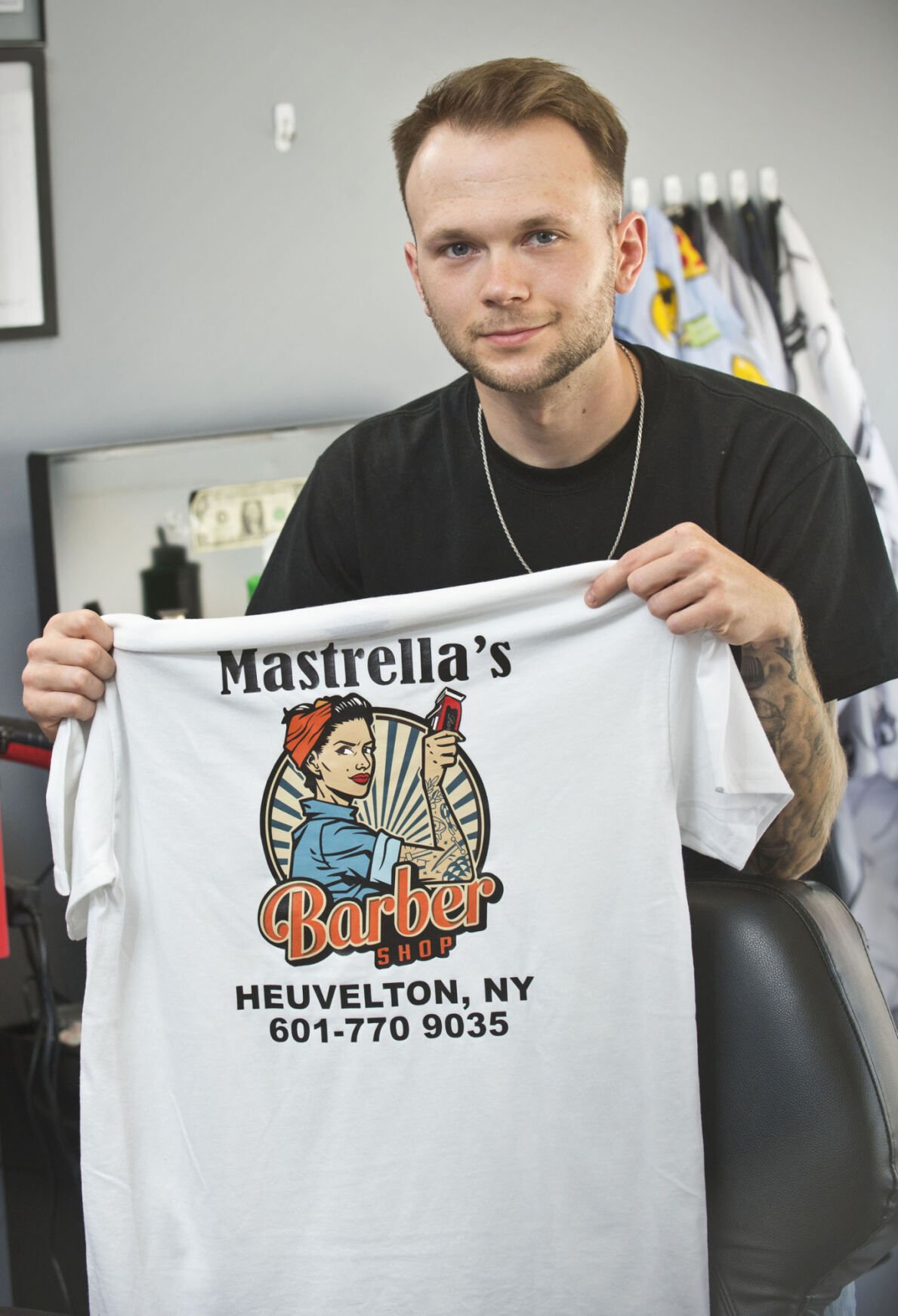 Barber Austin Brooks shows off one of his custom T-shirts at his new barber shop on State Street in Heuvelton. Christopher Lenney/Watertown Daily Times 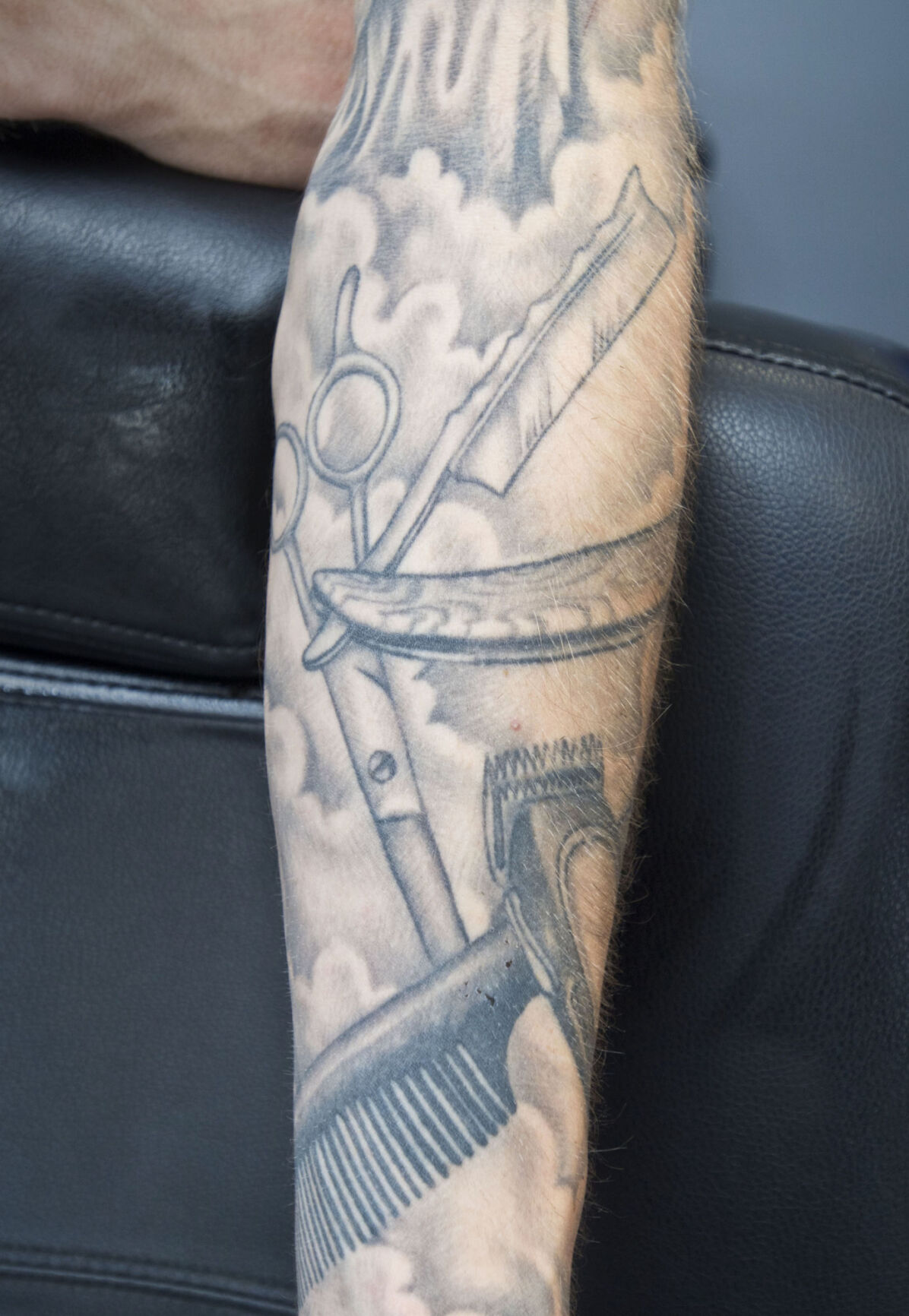 Barber Austin Brooks shows off his tattoos and tools of the trade including scissors, clippers and straight razor. Christopher Lenney/Watertown Daily Times

Barber Austin Brooks shows off one of his custom T-shirts at his new barber shop on State Street in Heuvelton. Christopher Lenney/Watertown Daily Times

Barber Austin Brooks shows off his tattoos and tools of the trade including scissors, clippers and straight razor. Christopher Lenney/Watertown Daily Times

HEUVELTON — Austin Brooks started cutting hair when he was 15. Nine years later, he opened his own barber shop, Mastrella’s.

“I started cutting hair anywhere I could cut hair, I just wanted to do it,” Mr. Brooks said. “I did it in kitchens, garages, living rooms, anywhere I could. I did anyone’s hair that would let me just trying to learn,” said Mr. Brooks.

Originally from Marlboro, Mr. Brooks graduated from Morristown Central School in 2015 and studied cosmetology at the Northwest Tech Center in Ogdensburg during his junior and senior years.

“After I graduated I moved to Buffalo and apprenticed at a couple master barbers and worked for many big corporations and even became management and supervisor,” said Mr. Brooks.

In Buffalo, Mr. Brooks was an apprentice at multiple locations including Barbering in Buffalo and Sharp Edgez Barber Institute.

“I always wanted to open my own shop and I knew I wanted it to be near home, a small town with good people,” said Mr. Brooks. “I moved back, looked for a spot, and went to work on renovating. The name comes from my cousin who owned a shop downstate a long time ago. We’re all Italian and from that area. Originally the goal was to give people the best haircut at the best price possible.”

Mastrella’s opened Friday at 75 State St. The shop is open from 9 a.m. to 5 p.m. Tuesday through Saturday.

“My goal was to take care of the north country with a new school barbershop with an old school vibe,” said Mr. Brooks.

“I love the military and the police and what they do,” said Mr. Brooks. “I think they deserve something more so their haircuts are just $5.”

The shop takes walk-ins and appointments, which can be scheduled via Facebook at Mastrella’s Barbershop or by calling 601-770-9035.