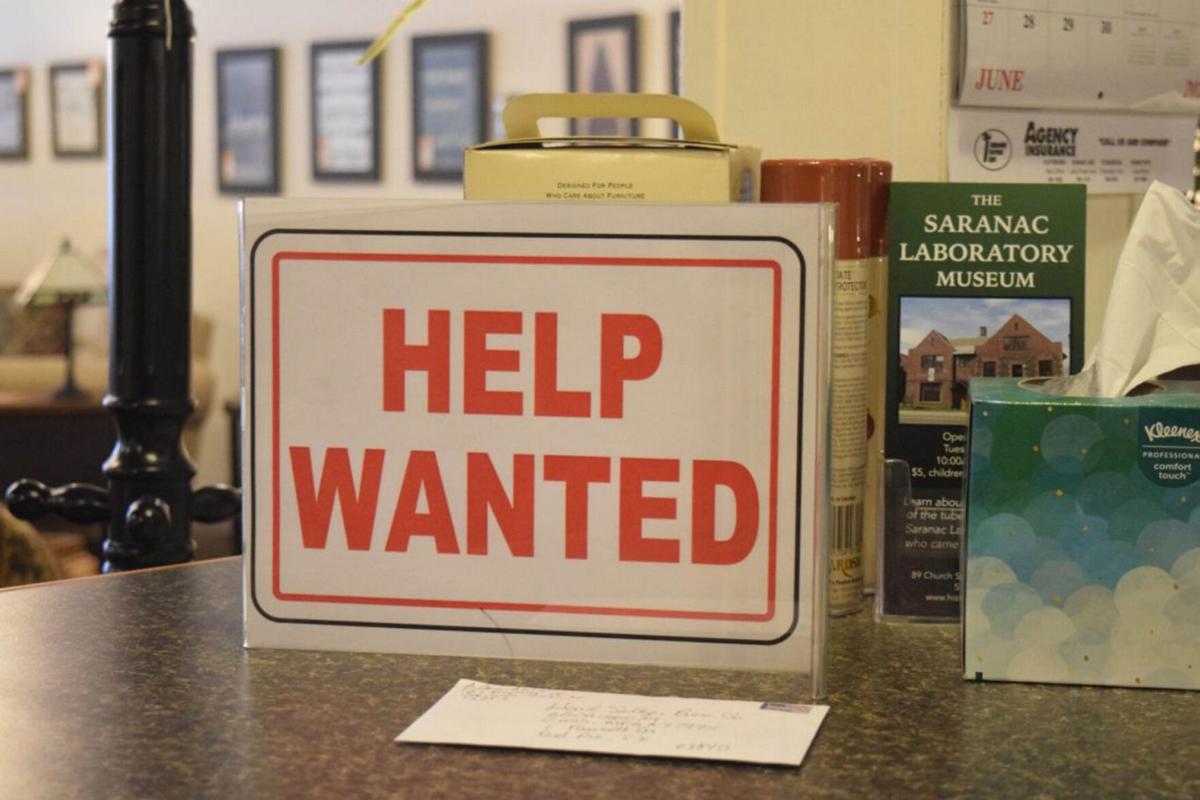 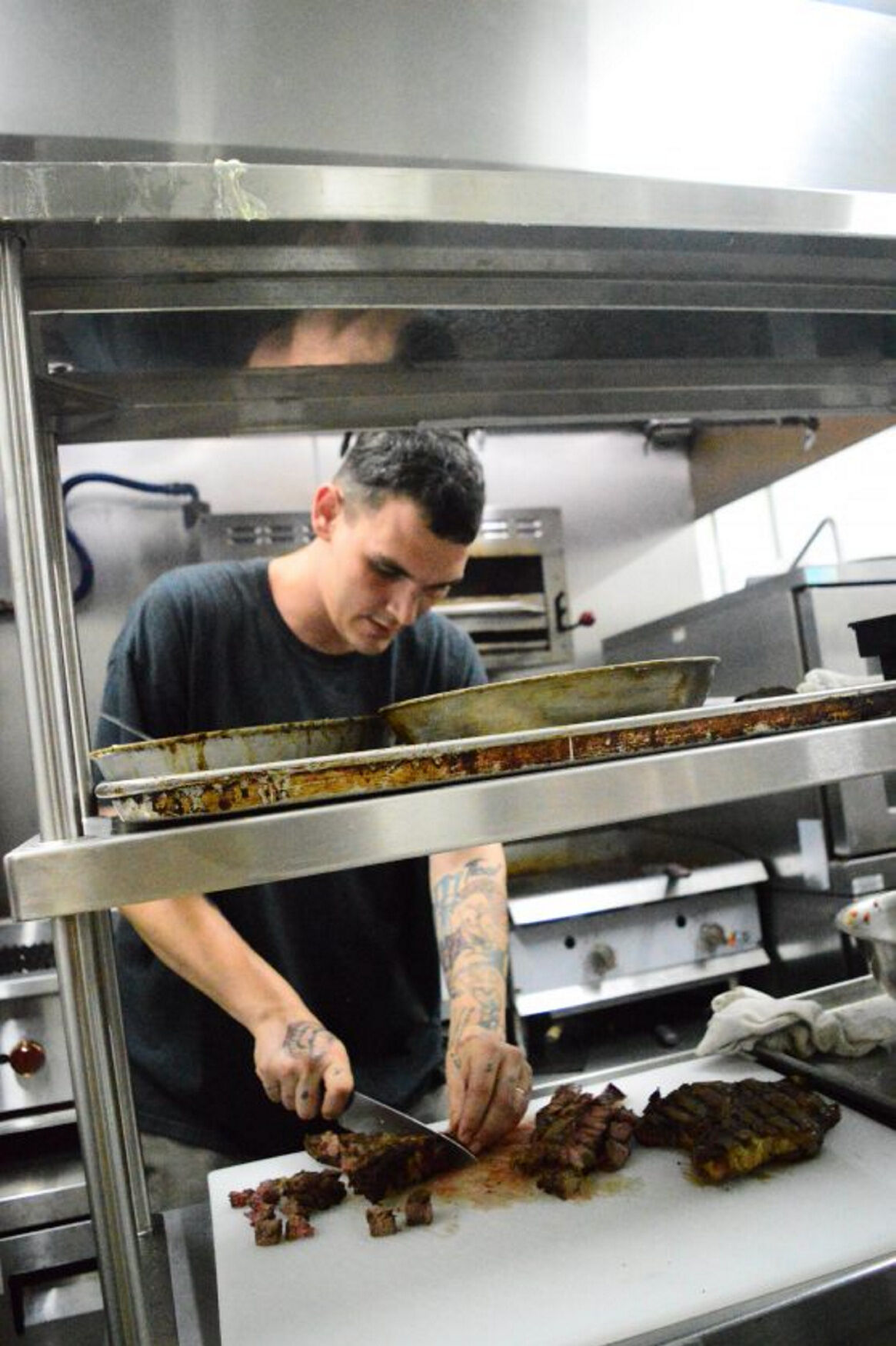 Amado sous chef Kyle Desrocher said he took a job at the Tupper Lake restaurant, not for the competitive wages, but for the high-energy kitchen experience. Aaron Cerbone/Adirondack Daily Enterprise

Amado sous chef Kyle Desrocher said he took a job at the Tupper Lake restaurant, not for the competitive wages, but for the high-energy kitchen experience. Aaron Cerbone/Adirondack Daily Enterprise

SARANAC LAKE — With the ongoing labor gap, finding employees is a tough job.

“This is our 75th year and hiring has never been harder,” said Rice Furniture’s Clyde Baker.

Rice Furniture has advertised a job opening for over a month online, in print and on a sign out in front of the store, none of which has led to new applicants, Baker said.

As businesses struggle to find employees, they’re adapting — offering higher pay, changing how they advertise and altering their operations to make up for the gap.

With plenty of job openings, hiring has become more competitive. Companies have to incentivize employees to either stay or to join their staff. Some businesses are offering competitive wages. Others have gotten creative. Stewart’s Shops and McDonald’s are offering scholarships to part-time college employees and discounting meals on the job. The Best Western in Saranac Lake is offering signing bonuses in its contracts.

So he adapted and is offering competitive wages. A starting line cook with saute experience starts at $22.50 per hour, which Rohrbach said is way higher than usual. But it’s still hard to find enough workers, and Rohrbach is shocked.

He usually had only seven employees before the expansion. He has 18 now and is still looking to hire around 10 more.

“At the end of the day, it’s the unemployment supplements,” he said.

Sous chef Kyle Desrocher said the higher wages are nice, but he took the job at Amado because he wants to be a chef. Cooking runs in his family — his grandparents and aunt have been local chefs and his mom could cook.

He said he came from Lake Placid for the fast-paced kitchen environment in May, and he loves it.

“A lot of adrenaline, a lot of rush and at the end of the night a feeling of satisfaction,” Desrocher said.

Meanwhile, the rest of the kitchen staff are in high school. They plate food, serve and assist around the kitchen, but they’re not experienced yet to cook.

Like Amado, local companies are waiting for employees to even apply. After advertising in various ways — ads in a newspaper, using online job search sites and good old-fashioned putting up a “Now Hiring” sign — companies still have few or no applicants.

Some, like Simply Gourmet in Lake Placid, have made applications available through QR codes on signs. Others, like the Boathouse at the Saranac Waterfront Lodge, are advertising through their employees spreading job openings through word of mouth and on their personal social media accounts. Some ask customers if they are looking for extra hours and encouraging them to apply.

“Employers are being creative to bring in the workforce,” North Country Workforce Development Board Executive Director Sylvie Nelson said.

She said some workplaces are offering child care for employees. Child care is often a barrier to work, because it is expensive and hard to find. This affects women more than men, she said.

Many businesses have found themselves adjusting by having employees fill multiple roles as they look to fill them.

“When there are not so many people as there was, the people that are left take on more hats,” Nori’s Village Market employee Addie Openshaw said. “We’re exhausted.”

Filling multiple roles comes with taking more shifts and a lot of hours.

“It is so short-staffed,” Openshaw said. “It makes for long days.”

“Too many hours,” Pierce commented with a laugh.

The labor shortage is not limited to private businesses. County and state departments are also short-staffed. Franklin County Community Services and Mental Health Director Suzanne Lavigne said the county is losing jobs in the state Office for People With Developmental Disabilities as people take higher-paying jobs in the private sector.

Many businesses have had to change their hours, shortening them to accommodate their shrunken staff. Even large chains are affected. McDonald’s in Lake Placid has cut down its hours of operation as management looks to hire 15 employees for the summer, which is already here.

Other restaurants have delayed reopening after closing for the pandemic.

“The lack of people applying for server positions at the McKenzie’s Grille is what was holding us up from opening,” said Robert Smith, general manager of the Saranac Lake restaurant.

Businesses are trying to avoid closing, but for some, closing for a short period is the only option. Owl’s Nest Pizza Parlor in Saranac Lake was closed for a week this summer due to a lack of staff.

In some businesses, employers become employees. By doing this, the owners were so busy they didn’t have time for interviews with the Enterprise.

Being understaffed limits the number of customers some businesses can have at a time.

“We will manage,” Rohrbach said of Amado’s staff. “It’s going to be slightly more stressful; more demand on everybody. We won’t be able to go full-out, 100%.”