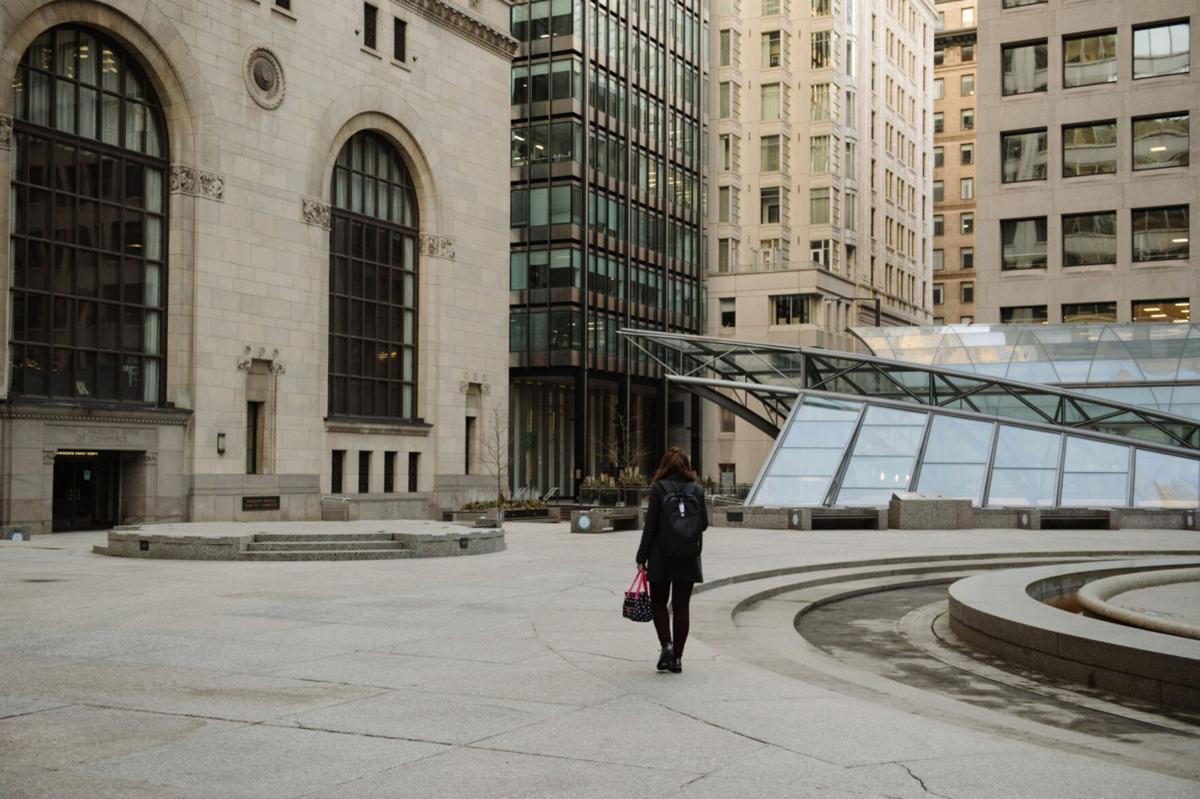 A pedestrian walks through an empty courtyard in the financial district of Toronto on March 25. Galit Rodan/Bloomberg/TNS 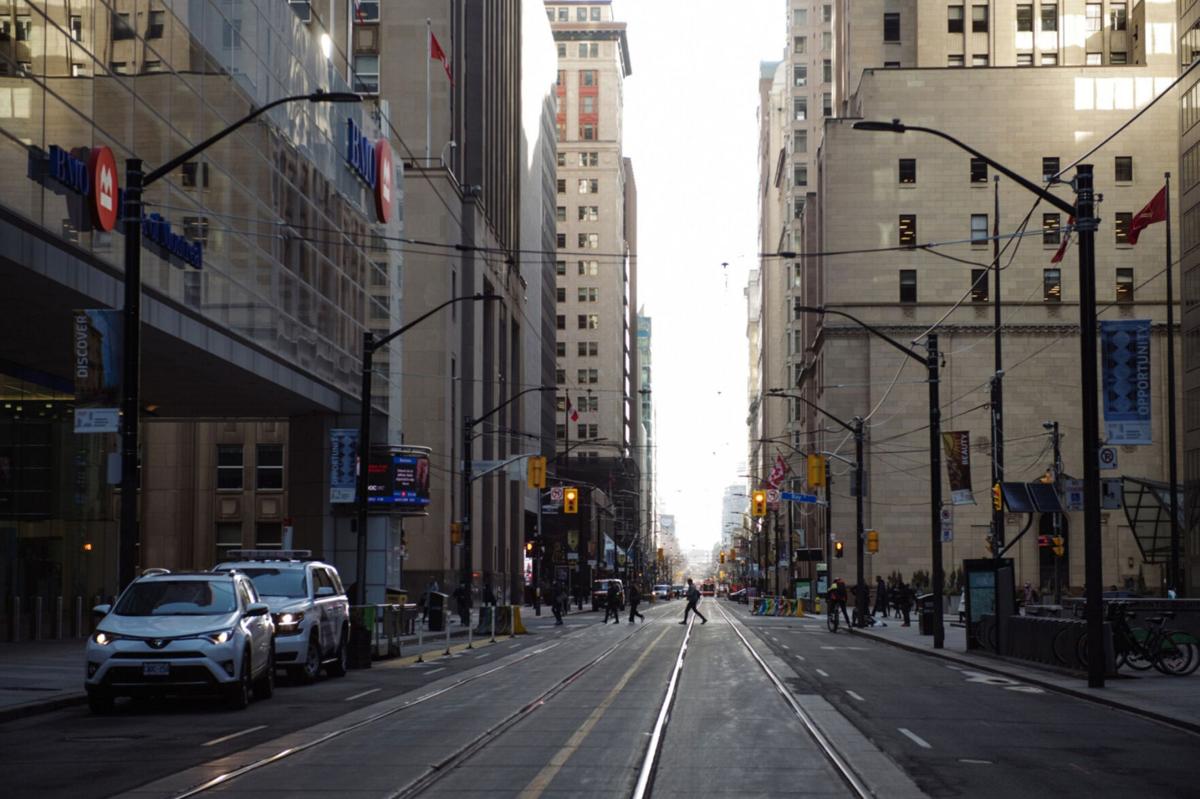 Pedestrians cross the intersection at Bay Street and Wellington Street West in the financial district of Toronto. Galit Rodan/Bloomberg

A pedestrian walks through an empty courtyard in the financial district of Toronto on March 25. Galit Rodan/Bloomberg/TNS

Pedestrians cross the intersection at Bay Street and Wellington Street West in the financial district of Toronto. Galit Rodan/Bloomberg

Restaurants in Toronto were ordered to close their dining rooms in October as a second wave of covid-19 was beginning to wash over the city. They haven’t been open since. Gyms, nail salons and barber shops have been shut almost as long. The mayor’s hair has grown so thick, it’s become a talking point on Twitter.

When spring arrived, there was a glimmer of hope. Restaurants were allowed to set up outdoor patios; hair salons were told they could open on April 12. Those plans were canceled on Thursday when Ontario’s government invoked a four-week “emergency brake” that tightens restrictions again and extends them across the province of 14.7 million people.

Ontario Premier Doug Ford, a conservative elected in 2018 with strong support from business, pleaded for understanding. The virus left him with no choice, he said. “This decision weighs extremely heavy on me,” he said. “I know what this means for people, to be here over a year into this pandemic. It’s frustrating and it’s very, very difficult.”

For some business owners, “difficult” has turned to desperation. They’re chafing at the interminable restrictions and the slow pace of Canada’s vaccine program. In a national survey of companies released in March, 10% of firms said they could carry on for less than 12 months at current levels of revenue and expenses.

Only 13.3% of the Canadian population has received at least one covid-19 shot. In the U.S., it’s 30%, according to the Bloomberg Vaccine Tracker.

Prime Minister Justin Trudeau has set a goal of vaccinating every adult by September. In the meantime, the Canada-U.S. border remains closed to most travelers, as it has been for more than a year, threatening airlines, hotels and tourism businesses with a second barren summer.

“The mood of the business community has shifted dramatically,” said Dan Kelly, chief executive officer of the Canadian Federation of Independent Business, a small-business lobby group. It’s gone from acceptance of necessary measures to “rage” at government, he said.

At lunchtime on a recent weekday, a signboard outside Chotto Matte, a Japanese-Peruvian restaurant across the street from Royal Bank of Canada’s headquarters, declared the patio open for dining. Not a person was seated there, despite sunny and warm spring weather.

Wall Street firms may be planning to bring back many staff to the office soon, but on Toronto’s Bay Street, the scene is quiet and is almost certain to remain that way for most of 2021.

At Bank of Montreal’s headquarters, less than 10% of staff have been coming into the office regularly over the past year. Most of those working from home will stay there until vaccines are broadly available, Mona Malone, Bank of Montreal’s chief human resources officer, said in an interview.

In the long run, Malone expects the bank will adopt a hybrid model, with some employees staying home part of the time. “People do miss the connectivity with their colleagues, but it’s going to be different,” Malone said. “They won’t be returning to a pre-covid-type experience.”

Toronto’s banks adapted quickly to the pandemic and are now earning bigger profits than before Covid-19 as the Canadian housing market soars. But the small businesses that surround them are beginning to snap.

Tom Antonarakis owns two seafood restaurants in downtown Toronto and is looking to offload them at a reduced price. Both are in food courts that rely on a lunch crowd of office workers.

“I’m in the process of trying to sell those two locations almost 30 cents to the dollar,” Antonarakis said. “We tried opening up after the first lockdown, and then they closed us down again.” He also sold one of his two food trucks and has been operating the other out of a mall in the suburbs.

Ford and his top officials acknowledge the financial pain but say the numbers justify extending restrictions.

Ontario has seen about 160 new virus cases daily per million population over the past week. That’s far fewer than neighboring Michigan and New York and still well below the peak of the province’s second wave.

But Ontario hospitals hit a new high for covid-19 patients in intensive care this week. The problem is a new variant of the virus, known as B.1.1.7, that is making people sicker.

“It’s spreading far more quickly than it was before and we cannot vaccinate quickly enough to break this third wave,” Adalsteinn Brown, a doctor who is co-chair of the Ontario Covid-19 Science Advisory Table, said at a news conference Thursday.

Politics is a significant factor too, according to Nelson Wiseman, a professor of political science at the University of Toronto.

Ford got high marks from voters for decisive action early in the pandemic. He’s fearful of being seen as overruling the advice of the medical community, Wiseman said. Toronto’s top doctor, Eileen de Villa, has been a consistent advocate of strict measures including indoor dining bans.

“The guy was scared stiff at first and has rolled over,” Wiseman said in an interview. “Our authorities have taken the advice of their medical officers, unlike Houston, unlike Miami, places like that.”

The Ford and Trudeau governments have offered an array of grants and loans to help businesses that have been hurt by covid-19 restrictions. But it isn’t enough for companies whose revenue depends on activities that are now banned.

“It’s been a long road and going on 25 weeks of being shutdown,” said Liz Clark, owner of Chair Decor, a linen supplier for events. “The subsidies they have been providing are helping, but we are still bleeding money every day. We have a burn rate of C$10,000 a month.”