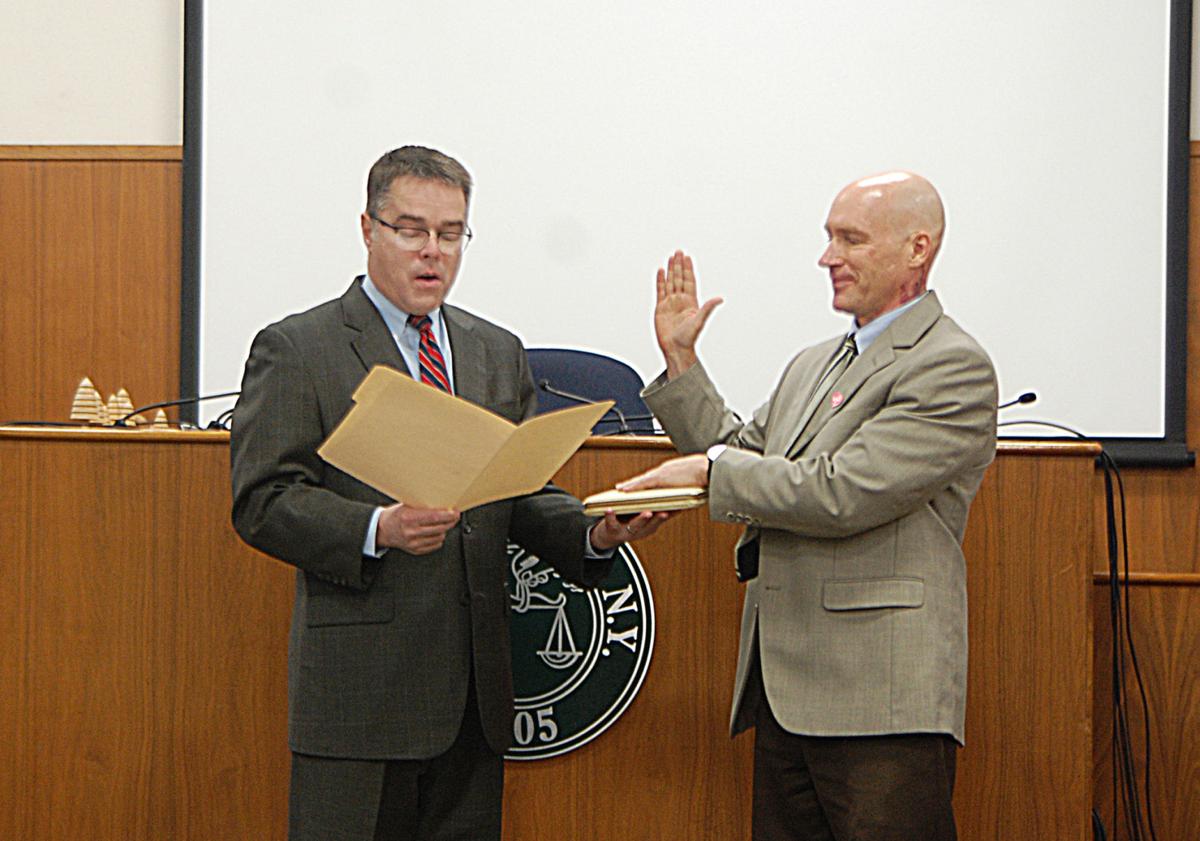 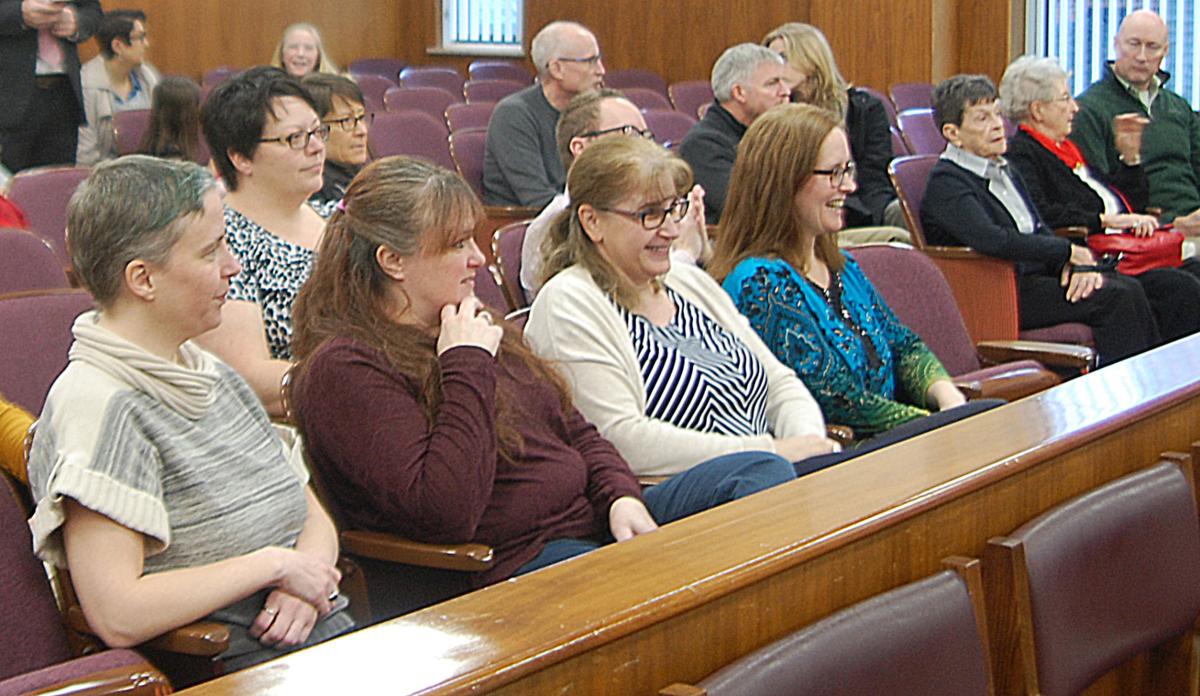 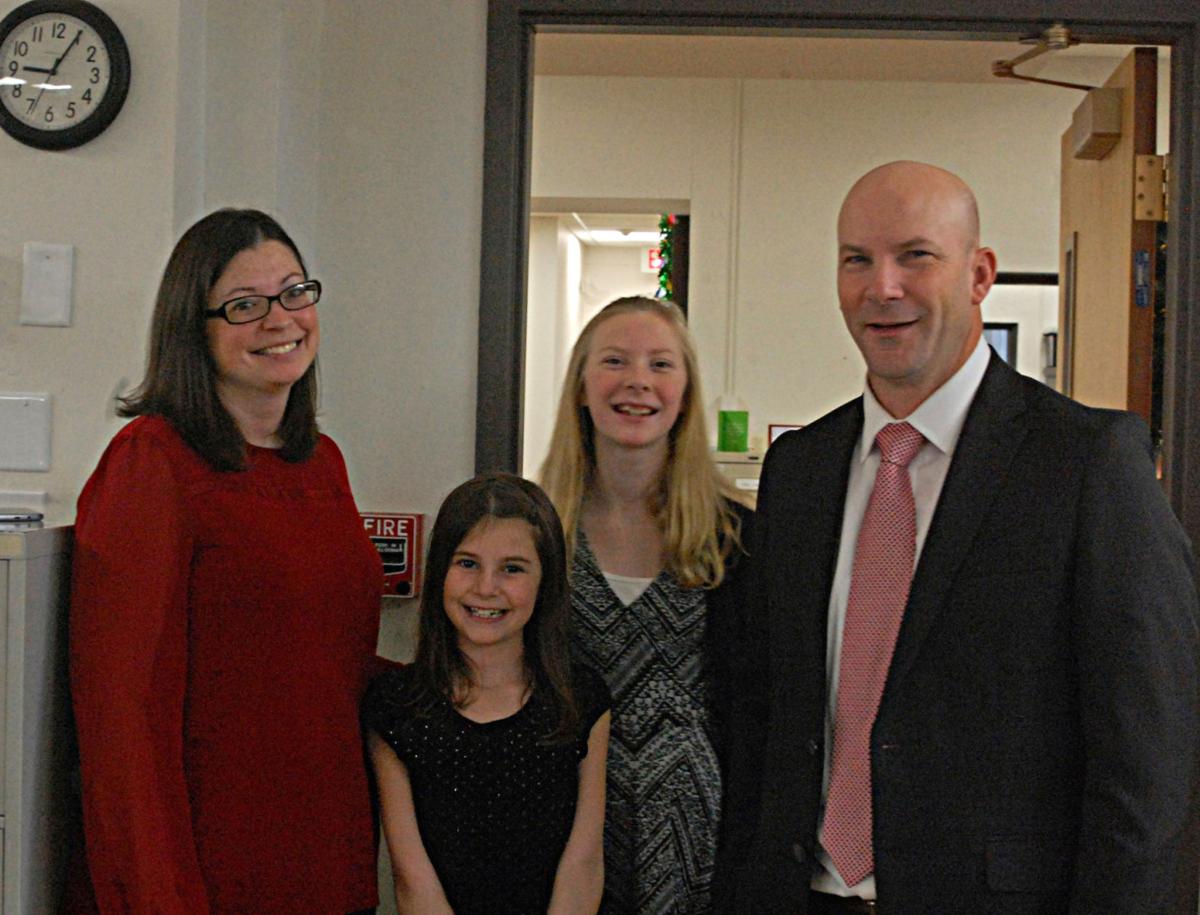 The new Lewis County Clerk Lyle “Jake” Moser with his wife, Cassandra, and children Rachel and Hannah after taking his oath of office on Monday morning. Julie Abbass/Watertown Daily Times 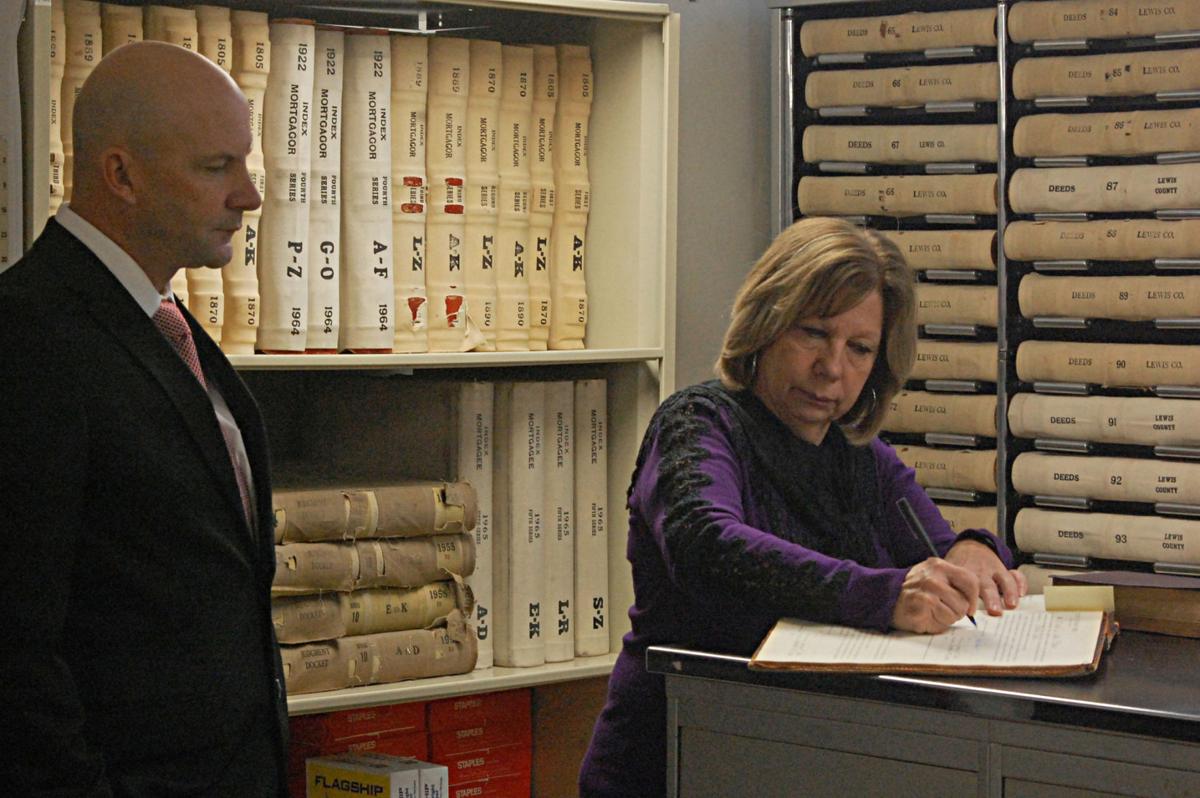 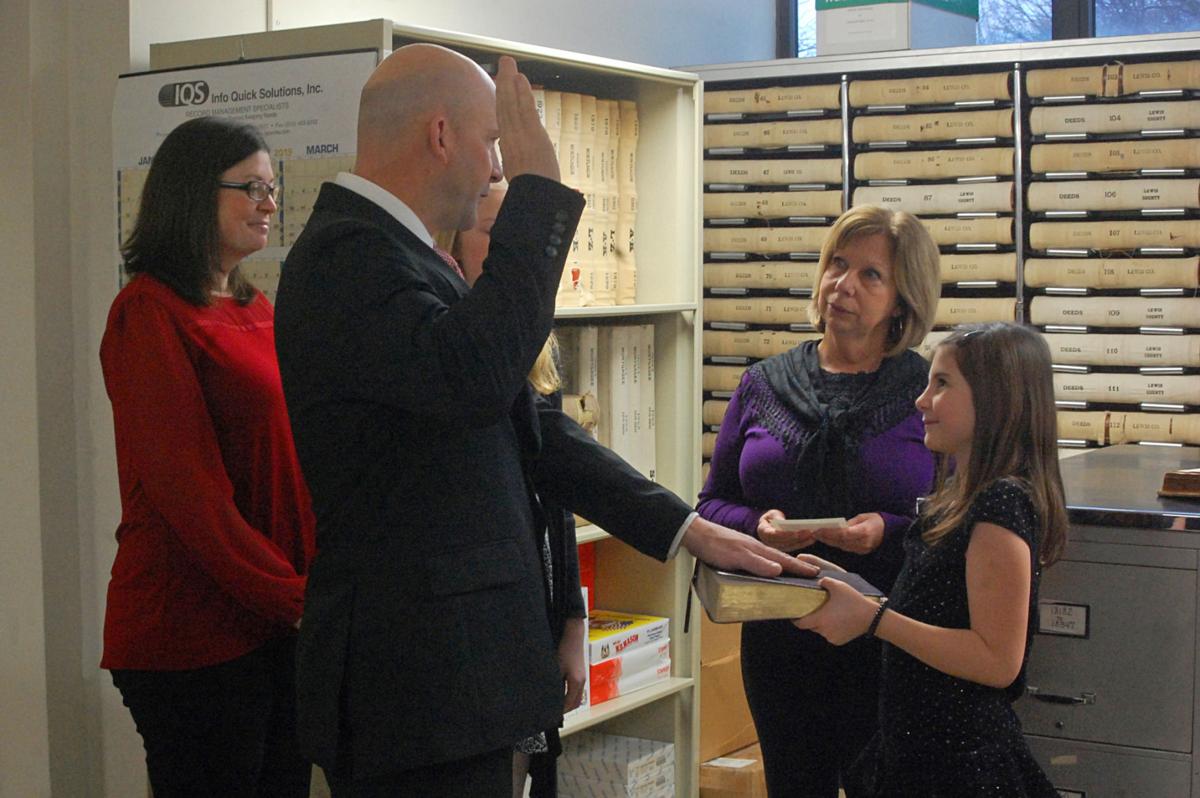 Lyle “Jake” Moser swears his oath of office as Lewis County Treasurer on a Bible held by his youngest daughter Rachel, while his wife Cassandra and daughter Hannah watch, with his predecessor Linda Hoskins leading him in his oath in the clerk’s county archives. Julie Abbass/Watertown Daily Times

The new Lewis County Clerk Lyle “Jake” Moser with his wife, Cassandra, and children Rachel and Hannah after taking his oath of office on Monday morning. Julie Abbass/Watertown Daily Times

Lyle “Jake” Moser swears his oath of office as Lewis County Treasurer on a Bible held by his youngest daughter Rachel, while his wife Cassandra and daughter Hannah watch, with his predecessor Linda Hoskins leading him in his oath in the clerk’s county archives. Julie Abbass/Watertown Daily Times

LOWVILLE — The ceremonial “changing of the guard” happened for the two newest-elected Lewis County officials who were sworn in to service on Monday morning.

Lyle “Jake” Moser placed his left hand on a Bible held by his youngest daughter, Rachel, as County Clerk Linda D. Hoskins performed the ritual with her replacement in the county archives room surrounded by the work of the clerks before them.

Mr. Moser’s wife, Cassandra, who is the county’s deputy clerk of the board, and his eldest daughter, Hannah, looked on as he repeated his oath after Ms. Hoskins, right hand in the air, pledging to support the constitutions of the nation and state, as well as to serve the county as its clerk to “the best of [his] ability.”

For the past two weeks, Mr. Moser has been spending time with Ms. Hoskins to learn as much as he could from her years of experience before the hand-over was complete.

“There’s a lot to this job. It’s very hands-on and there’s a lot to learn,” Mr. Moser said, but he is eager to get started, “The wait was the hardest part, but Linda has been great.”

Both the past and present clerks agreed that the people working in the clerk’s office are exceptional.

“I’m blessed that I have a very good staff I’m walking into,” Mr. Moser said.

Ms. Hoskins related the fact that someone once told her being county clerk is “the best job ever.”

“And it is,” she said. “It’s a great little family that’s here. I love my staff. They’re just amazing. We’re a team and we’re all one.”

As for Ms. Hoskins, after taking some time off in the new year, she plans to return to her roots and work part-time for National Abstract, where she spent 20 years before joining the county over 12 years ago, first as the deputy clerk of the board and then real property director before being the first woman elected clerk four years ago.

By way of advice for Mr. Moser, Ms. Hoskins said, “Take your time and do your research before giving answers out. People will come in and insist they’ve done things a certain way in the past or in other counties, but that doesn’t make it true. You’ve got to use the resources at your disposal.”

Later in the morning in the county board room, Judge Daniel R. King led Eric J. Virkler, the treasurer-elect, in the same oath.

Mr. Virkler said he has known Judge King since they were both small and was happy to be sworn into office by him.

Both men gave credit to Treasurer Patricia O’Brien who sat in the front row of the gallery, surrounded by her team, as attendees gave her rousing applause for her 30 years of service.

In attendance at both ceremonies were family members of the two new officers as well as the staffs of their respective offices, County Manager Ryan M. Piche, Mrs. O’Brien, Clerk of the Board Teresa L. Clark, Mrs. Moser, County Attorney Joan E. McNichol and many other county department heads and staff members.

After swearing to serve, both new officials signed the Book of Oath followed by Ms. Hoskins who completed the entry.

Mr. Moser and Mr. Virkler will begin doing their best to fill the substantial shoes of their predecessors on Jan. 2.