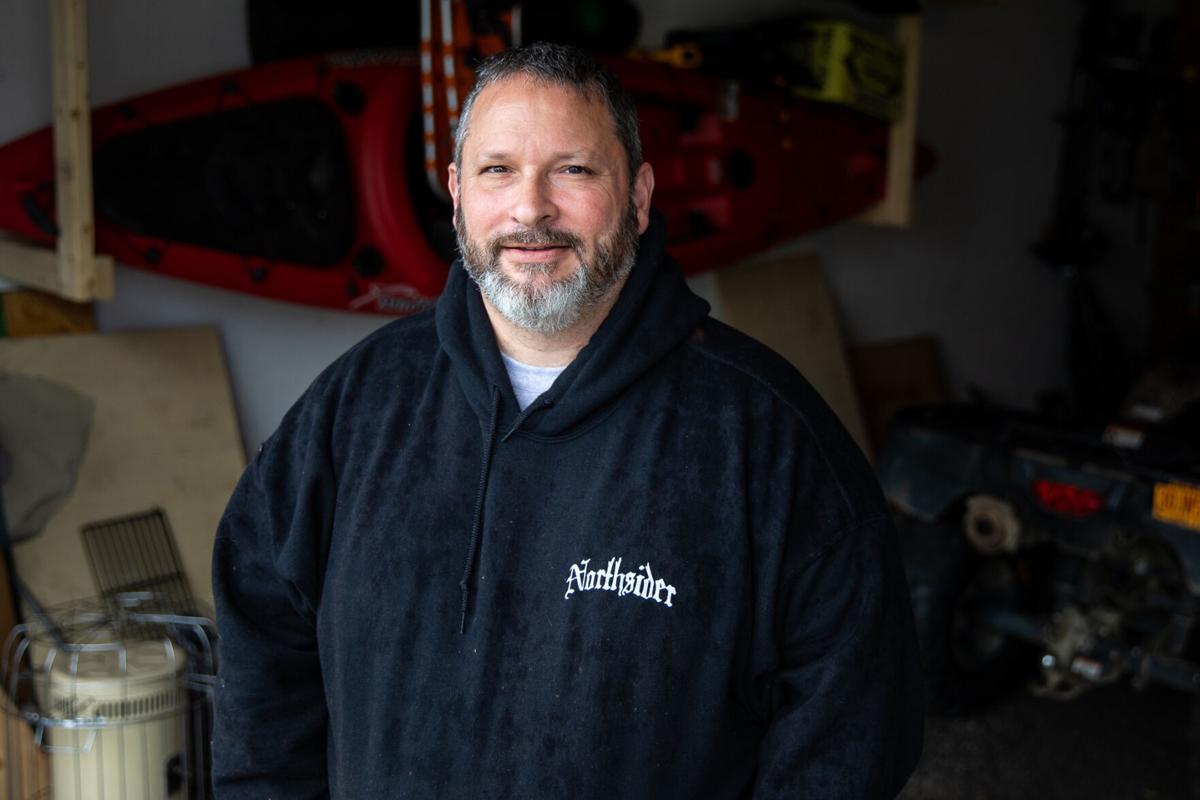 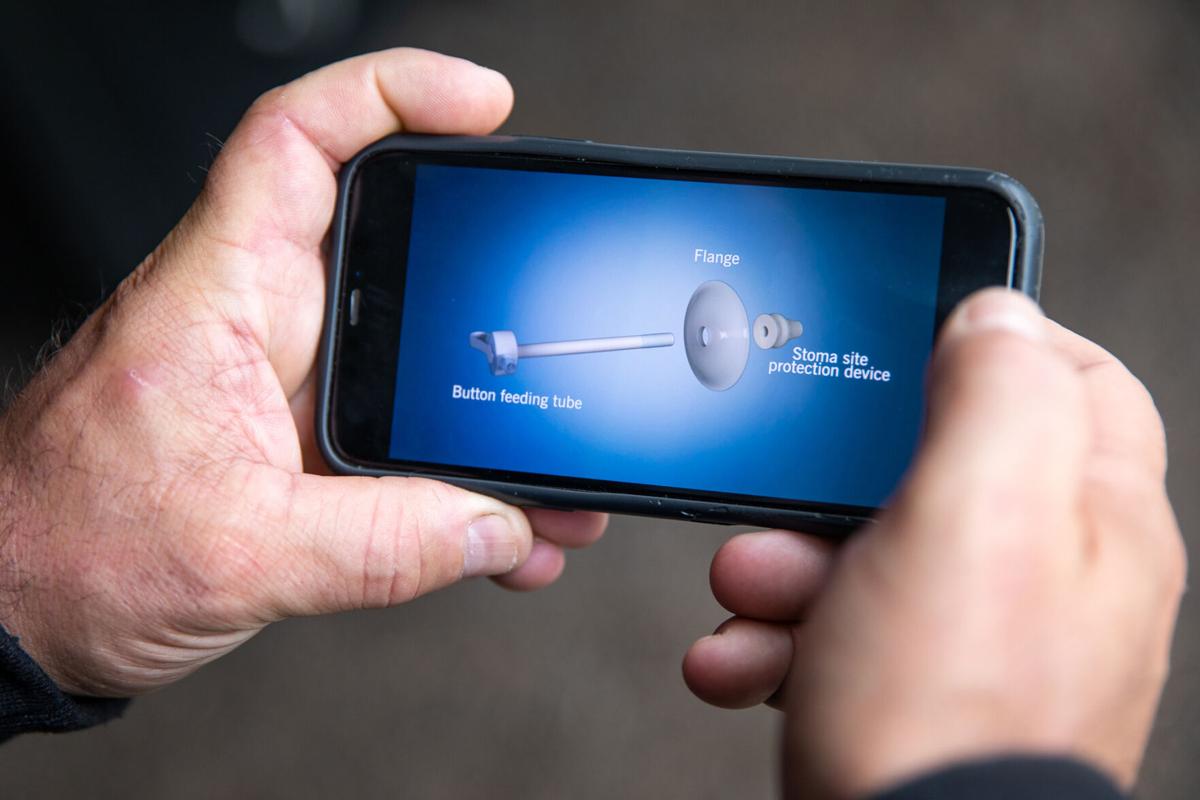 Seen on a phone screen is a diagram of a feeding tube with the protective device called a stoma, invented by Andy Williams of Watertown. Kara Dry/Watertown Daily Times 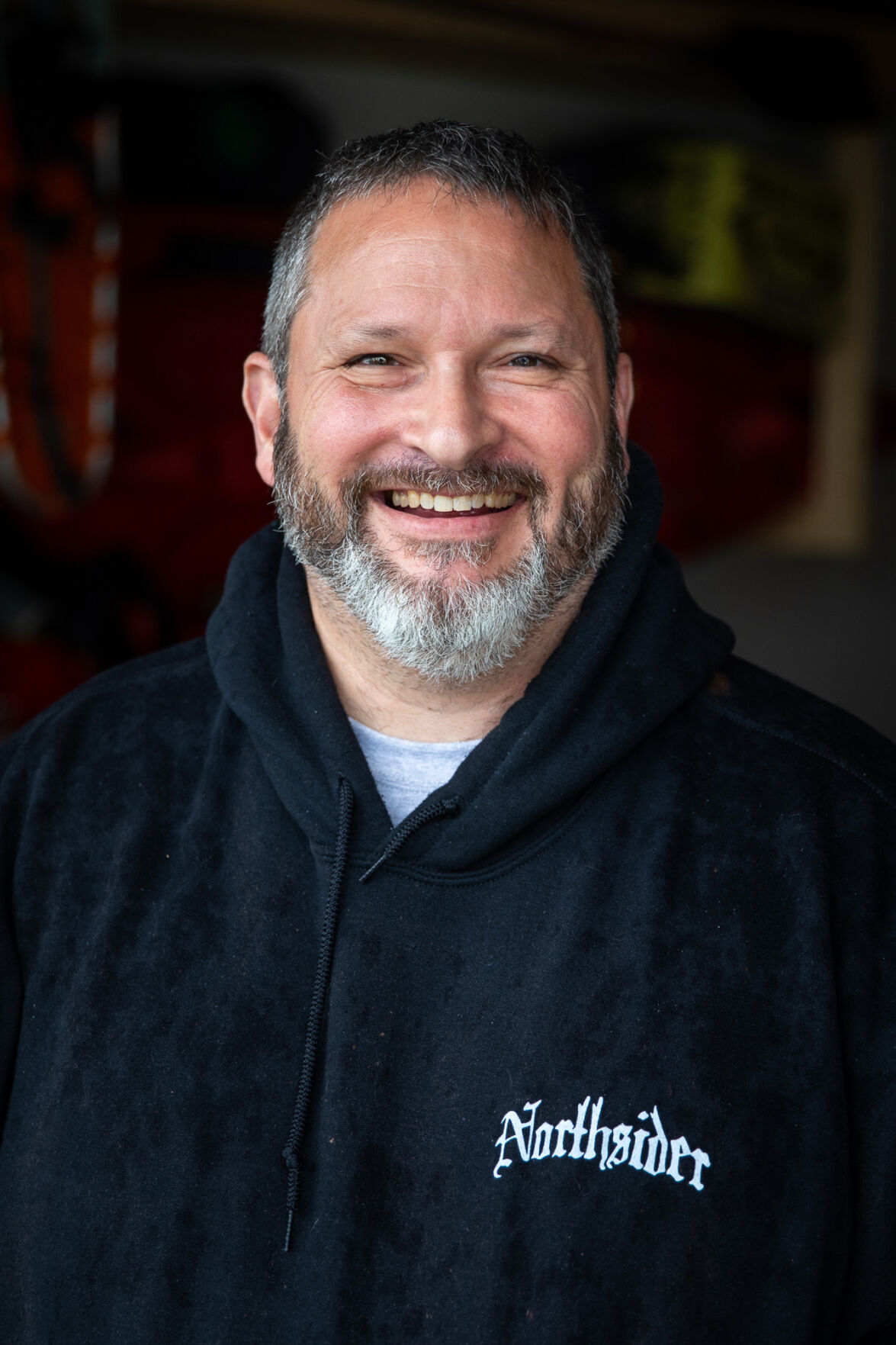 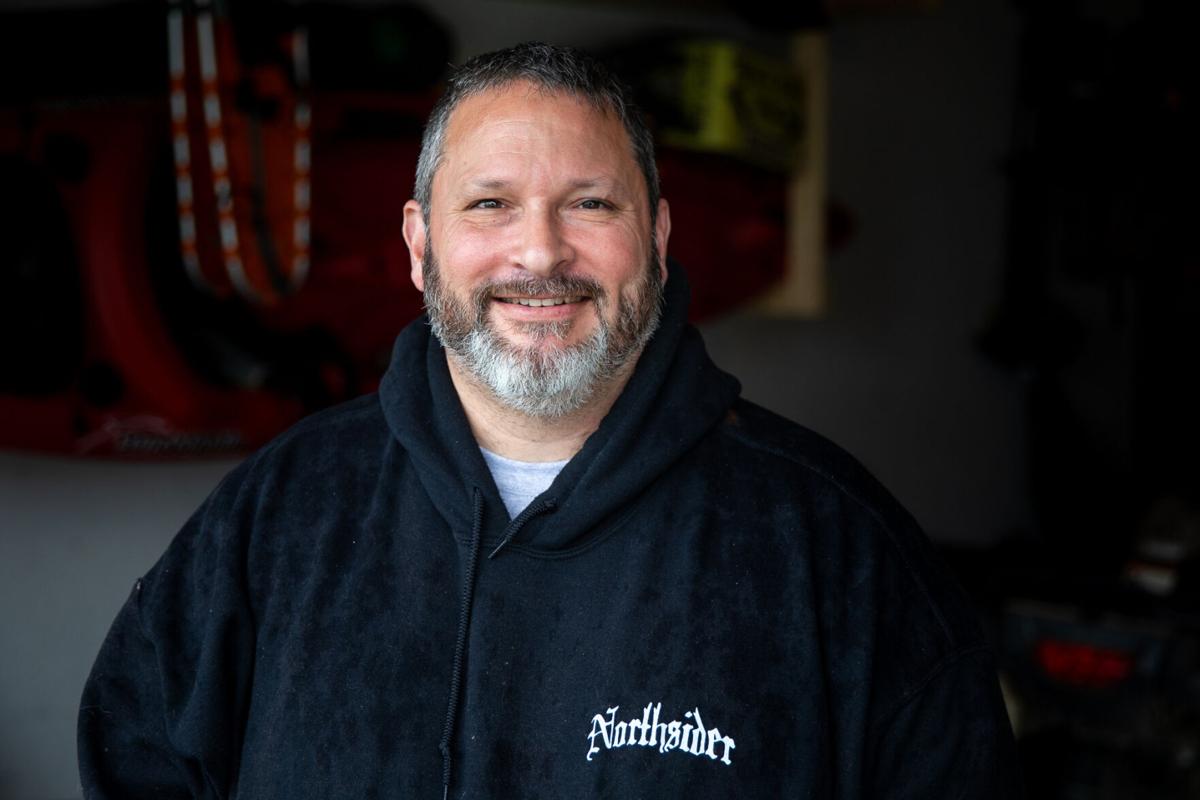 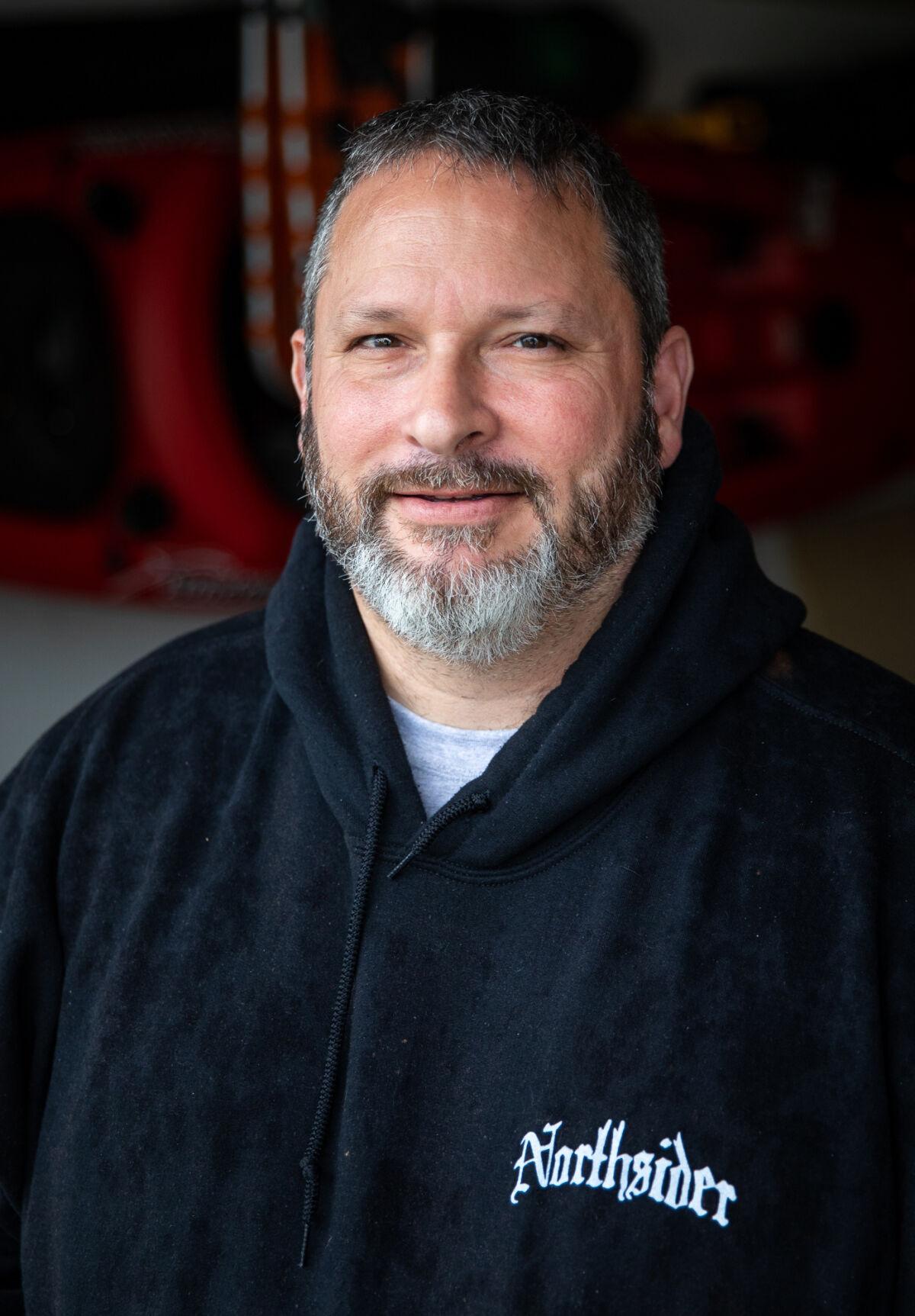 Seen on a phone screen is a diagram of a feeding tube with the protective device called a stoma, invented by Andy Williams of Watertown. Kara Dry/Watertown Daily Times

WATERTOWN — Former city resident Andy Williams and his business partner have chosen a name for the medical device that will help him and so many other people.

Mr. Williams was a patient at the Cleveland Clinic with a rare nerve disorder when he came up with the idea that changed his life.

In recent years, he, his business partner Dr. Eric Yudelevich and a team of eight from Cleveland Clinic Innovations have been working on the medical device, a prototype feeding tube that would protect Mr. Williams and other users from trips to the emergency room and possible hospitalization.

While COVID-19 has delayed some of that work, development of the feeding tube is back on track and should be ready for patient trials this fall, so it can be determined if it works and the U.S. Food and Drug Administration can approve it.

Dr. Yudelevich, a primary care and internal medicine physician at the Cleveland Clinic, was Mr. Williams’ physician before they became partners in development of the technology, now known as GioBey, although the name is likely to change down the road.

The name comes from a combination of Mr. Williams’ middle name, Giovanni, and from the doctor’s actual name, Blumrosen “Eric” Yudelevich, where the “Bey” comes from, Mr. Williams explained.

Suffering from a rare nerve disorder for years, Mr. Williams was prone to getting infections from a feeding tube that he must use due to his illnesses.

The Watertown native was frequently going to the emergency room for infections, caused by leakage from feeding tubes. It often resulted in hospitalization.

Problems with leakage caused embarrassing situations for Mr. Williams. The acidic fluids often leaked onto his clothing and he had to change his shirt several times a day, he explained.

He’s helping to change that for feeding tube users.

It’s rare for a patient to come to the Innovations team with a solution to a problem and also be the inventor, Mr. Meese said.

He was immediately impressed with Mr. Williams and with conceptual drawings and diagrams that he had brought with him at an initial meeting. It looked very much like an idea that could work, Mr. Meese remembered.

He also recalled how Mr. Williams told about the pain he had to endure in using a feeding tube.

“I was so taken in by him,” Mr. Meese said, saying that his unique, enthusiastic personality also came through.

In current practice, a feeding tube is surgically placed directly into the digestive tract, but the tube is prone to significant leakage. Highly acidic fluids can irritate and injure patients. Leakage also can make social lives difficult, preventing patients from living normal lives.

But Mr. Williams, a former Watertown resident who moved to Cleveland, Ohio, four years ago so he could be close to the treatment he needs, needed the medical device that protects the opening in the abdomen, called a stoma. The device has kept him from the many trips to the hospital that had become a part of his life.

“Now we’ll see if it works on other patients,” Mr. Williams said.

If it does work, as many as 500,000 people in the United States could use the device at any given moment, Mr. Meese said.

If all goes well, Mr. Meese predicted that the device could be ready to go to market within a couple of years. Either the Cleveland Clinic would continue to own the rights to the device or a medical manufacturing company would purchase them and then produce a new type of feeding tubes.

Six years ago, Mr. Williams, 51, an avid camping enthusiast and hiker, was diagnosed with mitochondrial disease, a chronic debilitating nerve disorder that leads to muscle weakness and pain, seizures and gastrointestinal issues. An estimated one in 4,000 people suffer from the progressive, incurable disease.

Over the years, he underwent about 10 surgeries at the Cleveland Clinic, where he was treated for the nerve disorder, bladder failure, digestive problems and Alstrom syndrome, which causes progressive loss of vision. He was told that he’d end up blind.

But miraculously it appears that the Alstrom syndrome has disappeared, maybe from the many vitamins and supplements that he takes, he said.

At one time, his illnesses became so debilitating that a big section of his large intestine was removed, leaving him unable to eat.

But his health condition didn’t stop him from enjoying the outdoors. Despite warnings from his doctors that he could die, he’s gone on numerous camping trips to the Adirondack Mountains. In 2018, he and a cousin completed a lifelong dream to travel across the country, a trip that lasted three months. They drove 20,000 miles in Mr. Williams’s 2016 Dodge Journey to visit the country’s best known national parks.

This summer, Mr. Williams, who visits Watertown often, has gone on a few smaller camping trips that consist of hiking trips that only last a mile or two because his energy levels have been down, he said.

But it was a drive from Lake Placid in October of 2017 that changed his life forever. When he got home, Mr. Williams used his days working as a plumber to work on the idea that night. He tried the contraption on himself that same night. It worked.

The invention also could make Mr. Williams a very rich man. While the Cleveland Clinic owns the patent and the intellectual property, Mr. Williams and Dr. Yudelevich will share in its royalties, even after he dies, the Watertown native said.

On disability from his job at a concrete company, Mr. Williams was first stricken in 2007. He was diagnosed in 2015.

In 2016, Mr. Williams nearly died from one of his infections. His entire body was septic and he had to be transferred by an emergency medical jet to Cleveland, where he was treated.

Mr. Williams, who grew up on East Division Street on the city’s north side, believes his illnesses were caused by the pollutants dumped decades ago at the former New York Air Brake Co. plant off Starbuck Avenue.

In 1995, the state Department of Environmental Conservation dredged Kelsey Creek and removed contaminants and soil. The DEC believes it has eliminated the pollutants, and they never got into the ground, so residents’ complaints of health problems never were proven.

The current company that runs Air Brake was not the cause of the pollutants. SPX, the North Carolina company that once owned the plant, paid $2.5 million for two environmental cleanup projects near the site five years ago.

Mr. Williams and two neighbors, brother James P. and Scott W. Barker, who also believe their neurological illnesses were caused by the contaminants, had hoped to pursue legal action. In 2012, they got environmental activist Erin Brockovich and her California law firm involved in looking at whether their health issues were caused by the dumped contaminants.

The Vititoe law firm was featured in the 2000 film “Erin Brockovich” that starred Julia Roberts as the environmental activist. They won a $333 million lawsuit against the Pacific Gas and Electric Co. in California for families impacted by the pollutants from the power company.

Her team agreed to represent a few hundred north country residents who believed they suffered health problems from the toxic chemicals dumped at the Starbuck Avenue site.

She brought in Los Angeles attorney Thomas V. Girardi, who was considered the best environmental lawyer in the country, to be the lead litigator in the legal case.

But their case never went anywhere.

Later, Mr. Williams called and talked to Mr. Girardi directly about why it didn’t. The attorney told him that the statute of limitations had expired, so it could not proceed.

Then last year, a documentary that streamlined on Hulu, described how Mr. Girardi, 82, and his wife Erika Jayne, 49, a cast member on the Housewives of Beverly Hills, lived lavish lifestyles.

The documentary, “The Housewife and the Hustler,” told the scandalous story how the attorney allegedly embezzled millions of dollars from victims’ families. His firm subsequently went bankrupt and he later claimed he suffered from Alzheimer’s disease.

Amid the legal woes, the couple divorced.

So he’s now focused on GioBey and how it can help so many people like himself.