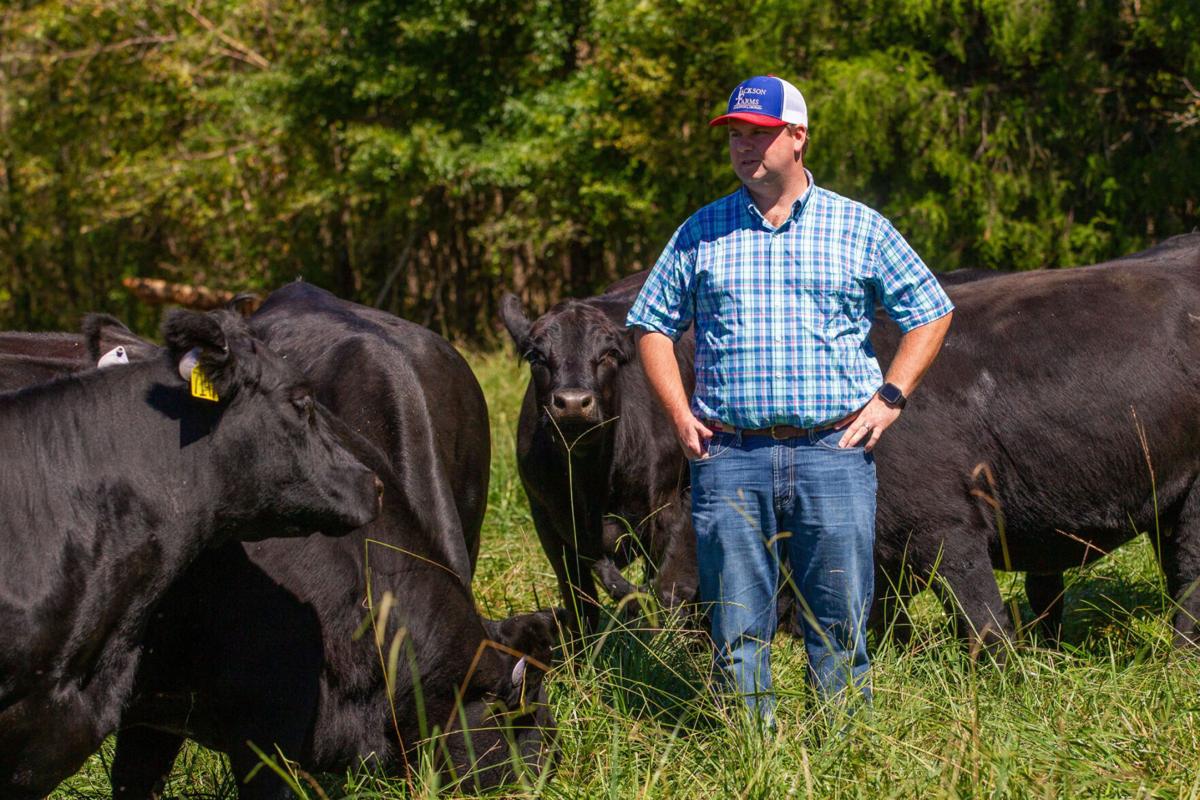 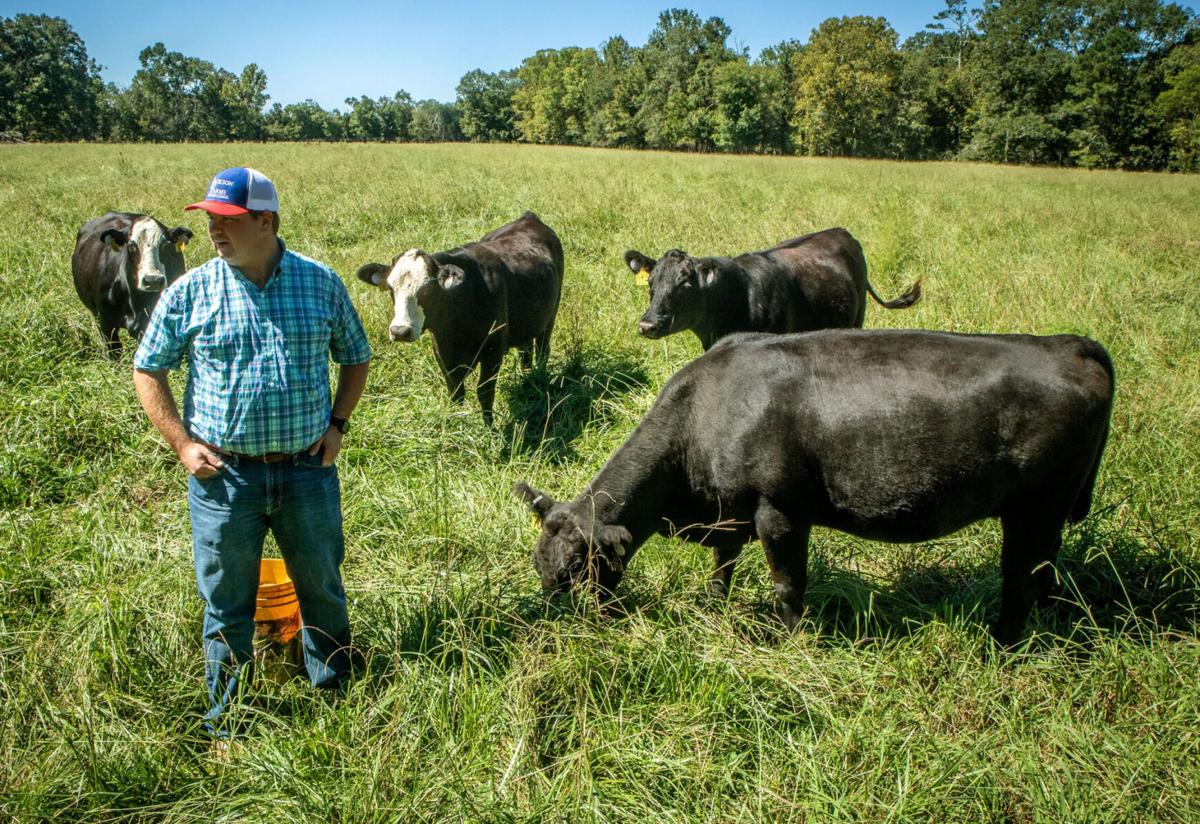 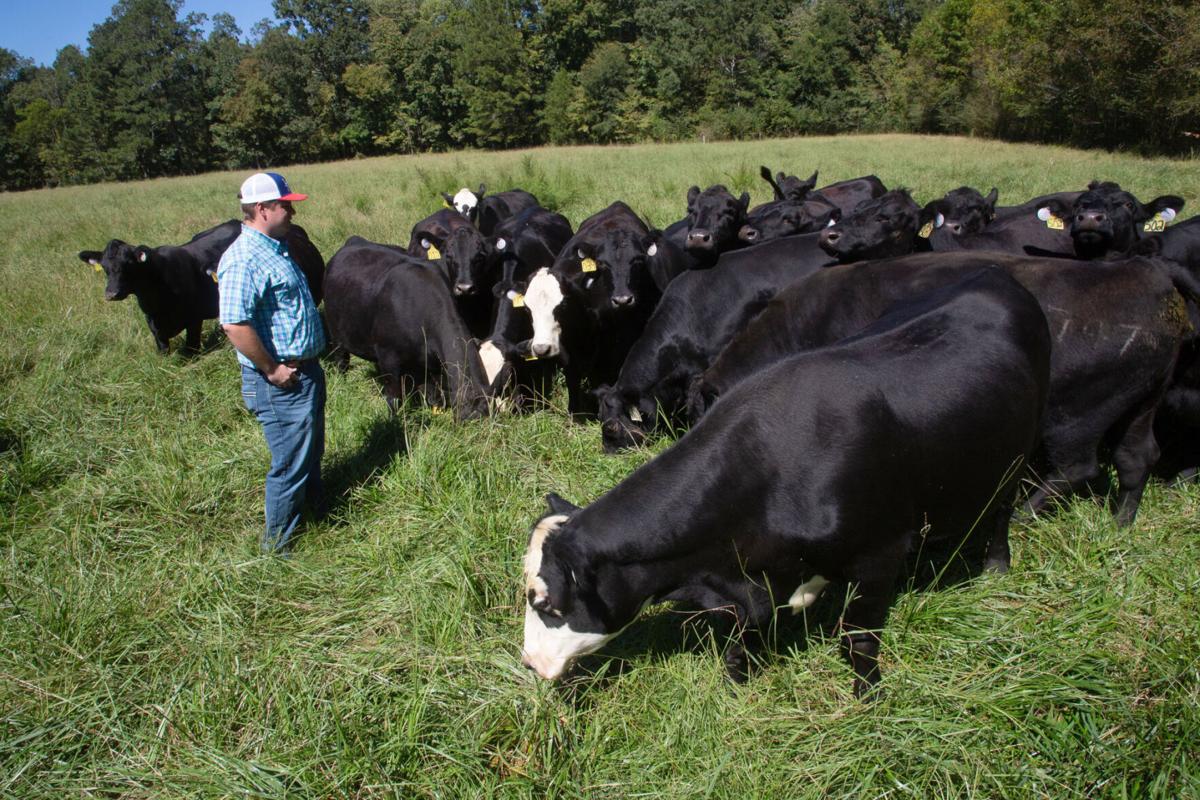 Cleve Jackson stands near some of his beef cattle on his Cave Spring, Ga. ranch on Sept. 24. Steve Schaefer/The Atlanta Journal-Constitution 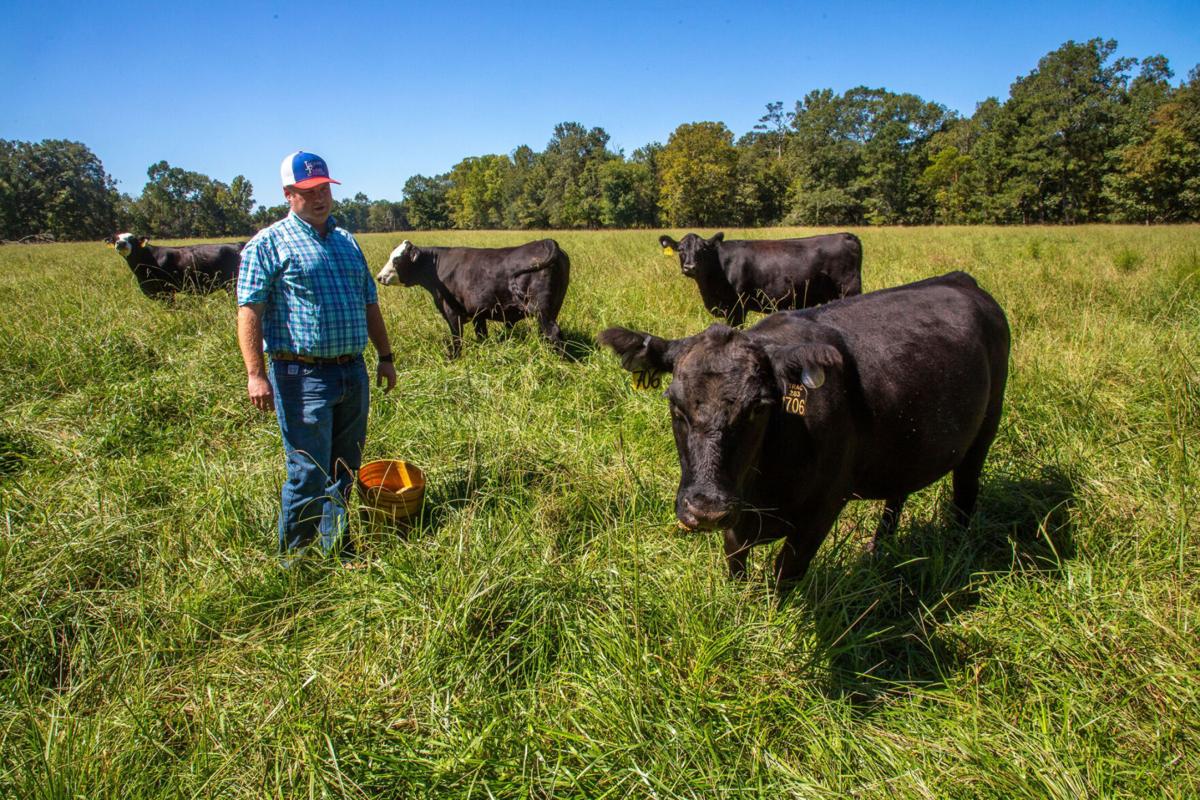 Beef prices have risen sharply over the past two years, but that doesn’t mean ranchers have seen the profits. Steve Schaefer/TNS 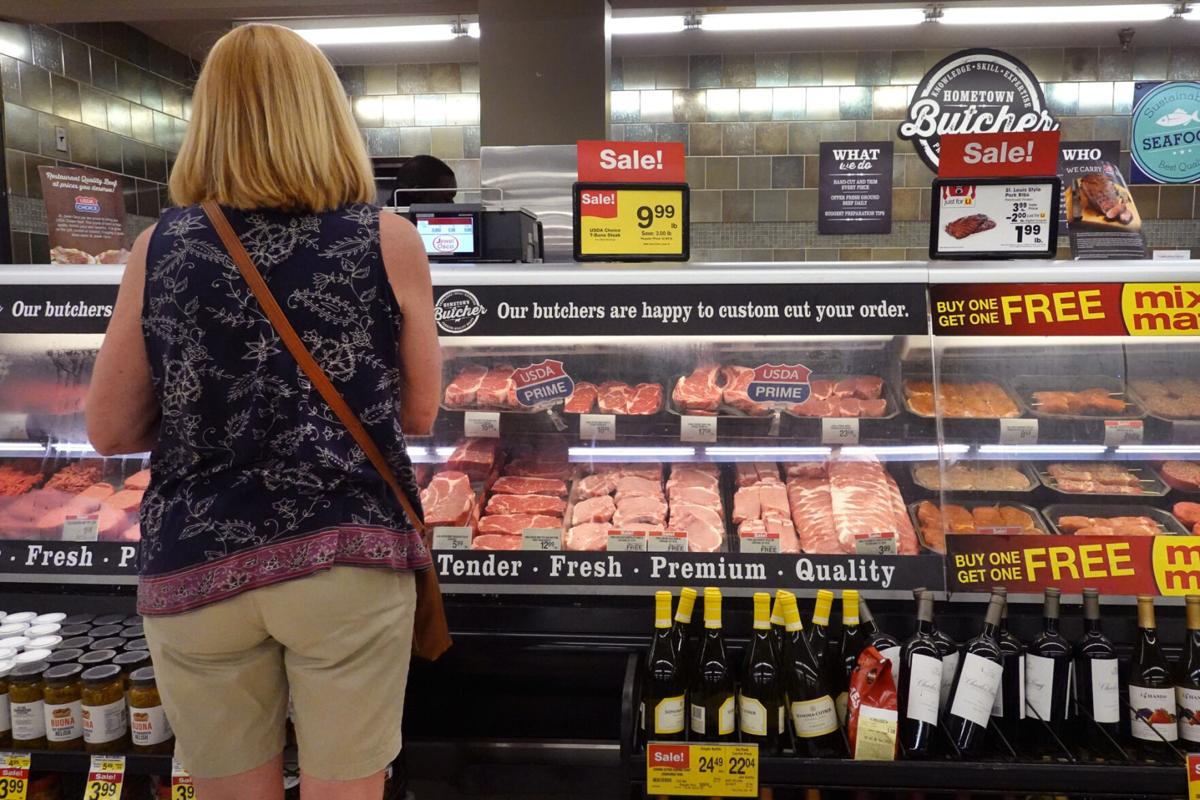 A customer shops for meat at a supermarket on June 10, 2021 in Chicago. (Scott Olson/Getty Images/TNS)

Cleve Jackson stands near some of his beef cattle on his Cave Spring, Ga. ranch on Sept. 24. Steve Schaefer/The Atlanta Journal-Constitution

Beef prices have risen sharply over the past two years, but that doesn’t mean ranchers have seen the profits. Steve Schaefer/TNS

A customer shops for meat at a supermarket on June 10, 2021 in Chicago. (Scott Olson/Getty Images/TNS)

Beef prices have climbed as much as 30% since the pandemic began, and that has Lorry Denis seeing red.

“It’s an outrage,” Denis said after a recent run for groceries.

The Atlanta retiree said she likes a nice cut of beef on the table, “but not enough to warrant paying crazy prices.”

Inflation has been pushing up prices for consumer goods nearly across the board, with shutdowns and other fallout from the coronavirus blamed for shortages of everything from lumber to computer chips. The supermarket is one more place that the pandemic has caught Americans off guard.

Beef prices have risen so quickly that even Congress is questioning the reasons. It has been holding hearings and promising to legislate transparency. The industry says market forces are pushing prices up, but ranchers, retailers and consumers are questioning that in the face of record profit margins by meatpackers.

The North American Meat Institute, an industry association, said in documents that prices have increased because COVID-19 hit meatpackers with new costs, such as providing personal protective equipment for employees and rejiggering factories with protective shields. Slaughterhouse slowdowns or shutdowns because of sickness have cut production, and the pandemic has also added expense to transportation because of shortages of truck drivers.

At the same time, demand has gone up from U.S. and international buyers. And like Georgia’s chicken processing plants, beef meatpackers have been forced to pay higher wages to hire workers.

Andy Gottshchalk of HedgersEdge said prices are up because of the unusual market.

“They became beneficiaries of record margins through no genius of their own,” he told The Atlanta Journal-Constitution.

While financial information on JBS, National Beef and Cargill wasn’t available, Tyson reported its operating income for the first nine months of 2021 was $2.4 billion higher than the same period in 2020, according to third quarter documents filed with the U.S. Securities and Exchange Commission. Beef sales helped drive that, it said.

But the increase in prices doesn’t mean cattlemen like Cleve Jackson, who lives in Floyd County, Ga., are making more. His price for live cattle hasn’t wavered more than a dime or two from the $1.40 a pound he got at his most recent auction.

Beef is Georgia’s fourth most lucrative farm commodity, bringing $661 million to ranchers, according to University of Georgia’s 2021 calculations. Only broilers, cotton and timber are more profitable.

The beef industry is one of agriculture’s most consolidated segments. Most Georgia cows are shipped to the Midwest to feed lots for fattening. The feed lots raise them to slaughtering weight before selling them mostly to the big four meat packing factories, which are also located in the Midwest. That consolidation has brought benefits, but also disadvantages.

“However, the processors have market power, so they have the ability to not pass all the decreased costs down to the consumer,” he said.

Some of the disadvantages have caused national price swings. A fire in August of 2019 caused a months-long shutdown of a Tyson plant that produced 6% of all U.S. beef. Last June, JBS suffered a ransomware attack and had to temporarily shut down its plants — 20% of U.S. beef processing, which added to shortages.

That play between shortage and prices has attracted the attention of ranchers and lawyers for retailers.

“The processors kind of have a monopoly on the market,” said Fred Gretsch, who operates Gretsch Brothers Angus in Oglethorpe County, Ga., near Athens. He’s concerned they have the power to dictate rather than obey market forces.

“They were able to do two things when the fire happened,” Gretsch said. The slowdown in production meant cattle waiting for slaughter back up, creating a glut and low cattle prices.

“They were able to push beef prices up in the marketplace for the end user and push back on guys supplying them cattle — the feed yard and cow-calf producer,” he said.

Price-fixing lawsuits in Minnesota and Illinois allege there is bad intent in the meatpackers’ slowing production during a time of increasing demand. The meatpackers deny the allegations.

The White House and members of congress also are watching what’s happening with prices. Agriculture and judiciary committees are holding hearings and demanding transparency in pricing and how the big companies structure deals with ranchers and feedlot owners. Lawmakers are talking about easing regulations on smaller regional or local slaughterhouses to increase competition and offering start-up or expansion grants.

The White House also issued a statement Sept. 8 saying the administration of President Joe Biden will “enforce the antitrust laws, boost competition in meat processing, and push back on pandemic profiteering that is hurting consumers, farmers and ranchers across the country.”

The North American Meat Institute responded by blaming COVID-19 and calling on administration officials to stop scapegoating the industry.

Despite the price increases, people are still buying beef, and demand and prices for meat are expected to stay steady at least into 2022.

Jackson is looking longer term. He holds a full time job in pharmacy sales so he isn’t dependent on cattle to make ends meet. He hopes to keep it going and make enough at least to pay the farm’s way.

“I am a third-generation farmer. Hopefully, we will have a fourth generation coming behind us,” he said.