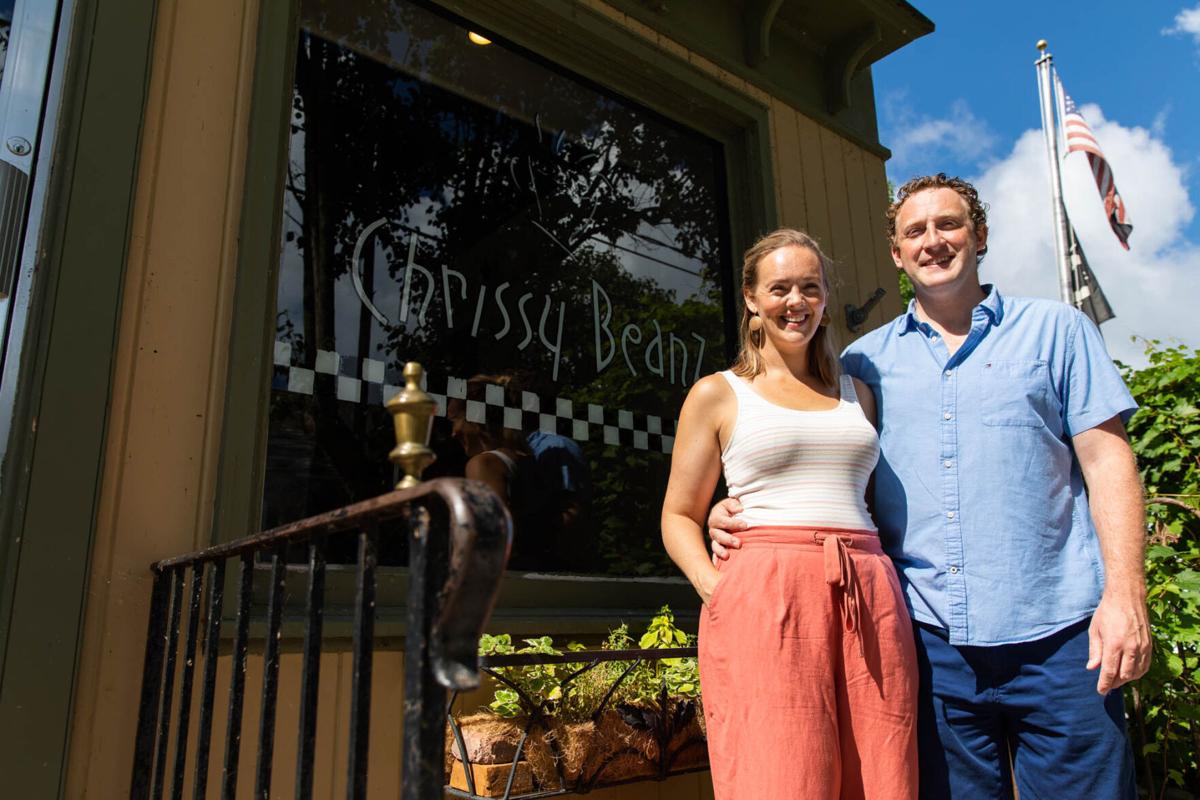 Sarah C. and Daniel D. Radmanovic stand together in front of Chrissy Beanz Bakery on West Main Street in Sackets Harbor. The Radmanovics are the new owners of the cafe. Sydney Schaefer/Watertown Daily Times 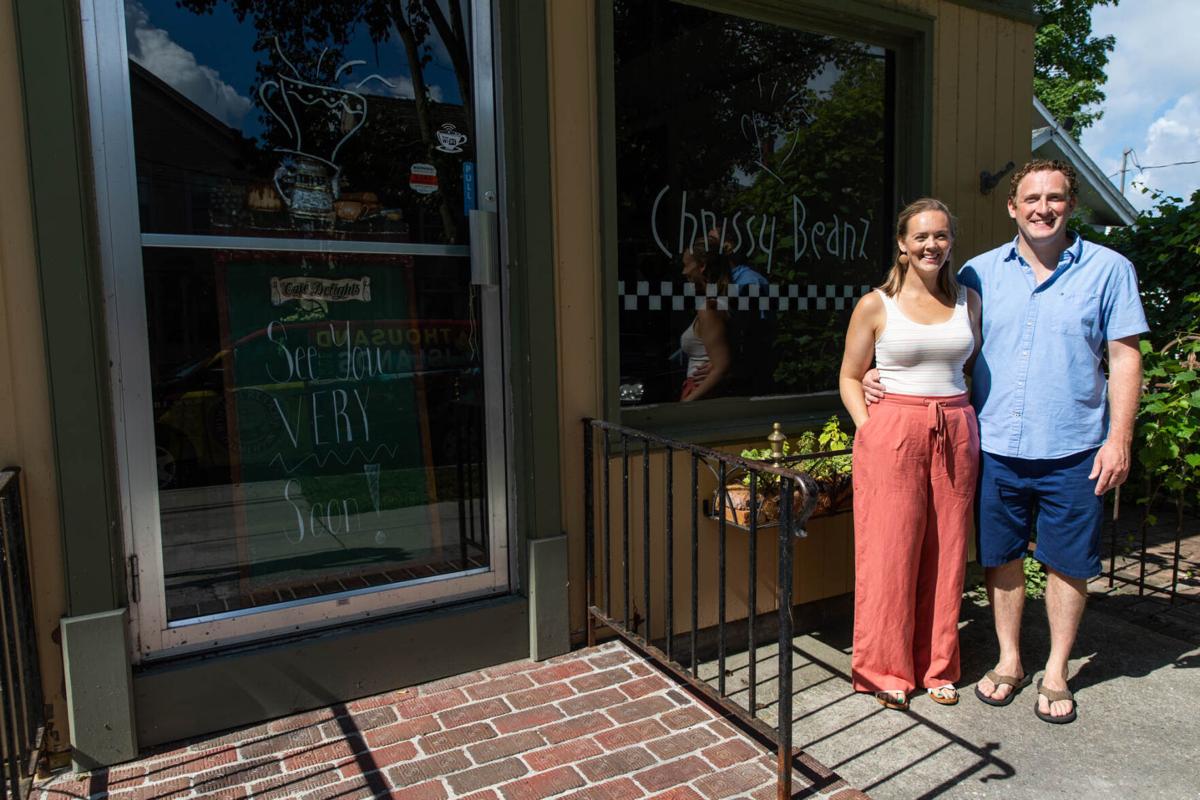 Sarah C. and Daniel D. Radmanovic stand together in front of the Chrissy Beanz cafe on West Main Street in Sackets Harbor. The Radmanovics are the new owners of the cafe. Sydney Schaefer/Watertown Daily Times

Sarah C. and Daniel D. Radmanovic stand together in front of Chrissy Beanz Bakery on West Main Street in Sackets Harbor. The Radmanovics are the new owners of the cafe. Sydney Schaefer/Watertown Daily Times

Sarah C. and Daniel D. Radmanovic stand together in front of the Chrissy Beanz cafe on West Main Street in Sackets Harbor. The Radmanovics are the new owners of the cafe. Sydney Schaefer/Watertown Daily Times

SACKETS HARBOR — While three years can come and go in the blink of an eye, Sarah C. Radmanovic’s memories from working at Chrissy Beanz Bakery in high school have stayed with her — so much so that she is now the proud co-owner of the very same place at which she started working when she was 16 years old.

It was there that she met her husband after being set up on a blind date by a friend and fellow Watertown native. The two eventually moved to Connecticut, where they have been living for the past five years.

Earlier this year, when the COVID-19 pandemic hit, the two made the decision to spend the summer at their cottage in Henderson Harbor. Previously, the plan had been to sell the house in Connecticut and move to Buffalo, which would be closer to where Mr. Radmanovic grew up in Vancouver, Canada and closer to Watertown for Mrs. Radmanovic.

While they were in the area, the Radmanovics found out Chrissy Beanz was up for sale. One thing led to another and before they knew it, the couple was buying the same business where Mrs. Radmanovic had started working 18 years ago.

“It’s awesome, it’s exciting, I’m just so pumped about everything,” Mrs. Radmanovic said. “I feel like I’ve just been working so much, obviously not even getting paid yet, but it’s the most exciting work I’ve ever done in my entire life.”

Mrs. Radmanovic recalls working at the bakery with other high schoolers and feeling like they were running the place. Though there was a lot required of them, the group became close friends, hanging out aside from work. When the sale became final, Mrs. Radmanovic reached out to a former baker to tell him the good news.

With an intense love for both Chrissy Beanz and baking, this business venture and Mrs. Radmanovic are a match made in heaven. According to Mr. Radmanovic, his wife has always said that it would be a dream of hers to have her own coffee shop or bakery — and now she has both.

“Dan was like, ‘This is your dream, we need to at least go down the road and if we hit a roadblock, then we’ve got our alternate plan of Buffalo,’” Mrs. Radmanovic said. “We just forged ahead and we never hit too many roadblocks, obviously, because here we are.”

The two purchased the establishment from former owner Andrew T. Hanzlian, who still owns Tin Pan Galley across the street and opened Chrissy Beanz in 1999 with his late wife Cheryl A. Hanzlian. Mrs. Radmanovic’s family was very close to the Hanzlians when she was growing up.

“We used to spend Thanksgiving there, I used to play Nintendo in their bedroom whenever we went over to visit them,” Mrs. Radmanovic said. “Then I worked for her (Cheryl) growing up, she gave me a job at Tin Pan, she gave me a job here at Chrissy Beanz. I really want to reimagine the business with her in mind.”

Not wanting to change the institution too much but still wishing to put their own spin on things, the two decided to change the wall colors to be a bit more monochromatic and brighten things up, as well as add some new flooring and lighting. Other than that, the food and drinks customers have grown to love over the years won’t change much.

“The baked goods will remain the same, it’s a rotational dessert menu,” Mrs. Radmanovic said. “We are getting rid of the lunch menu and we’re boosting the brunch menu, and we’re elevating the current items.”

Mr. Radmanovic shared that they will also incorporate some friend and family recipes into the menu, for instance, one of the brunch items will be called the Iris, a fresh breakfast sandwich inspired by a friend’s mother of the same name.

Before the bakery, the Radmanovics both worked for the accounting firm Deloitte. While Mr. Radmanovic still works remotely for the firm, Mrs. Radmanovic was let go due to the ongoing COVID-19 pandemic the morning the two went to meet with Mr. Hanzlian about the property.

“You wouldn’t think a layoff is a silver lining, but it was like a good sign,” Mr. Radmanovic said.

Now, Mrs. Radmanovic is free to focus on the bakery — as well as the couple’s toddler Rosie. Baking religiously since she was 22, Mrs. Radmanovic said she will be bringing back Shannon Balcom, the young woman who had previously been baking at Chrissy Beanz, as the full-time baker, and will also work her way into baking for the business. She will also be bringing back Leanore Grant as the manager of the business.

Mr. Radmanovic will work at the bakery part time once or twice a week along with two other full-time employees and another part-timer. A self-proclaimed coffee nut, Mr. Radmanovic has been focusing on the coffee for the business and has been working with Sackets Harbor Coffee Roasters, trying to utilize local products and work as much as possible.

Ideally, the couple would like to open, or rather reopen, the business Saturday, Sept. 5.

“This is the most important thing I think I’ve ever done outside of get married to Dan and have a child, this is like the third coolest thing I’ve ever done in my life,” Mrs. Radmanovic said of her new business. “I think it’s awesome to become part of this small community. Chrissy Beanz is an institution, it’s been around for so long, people love it. This is like my dream come true, basically.”