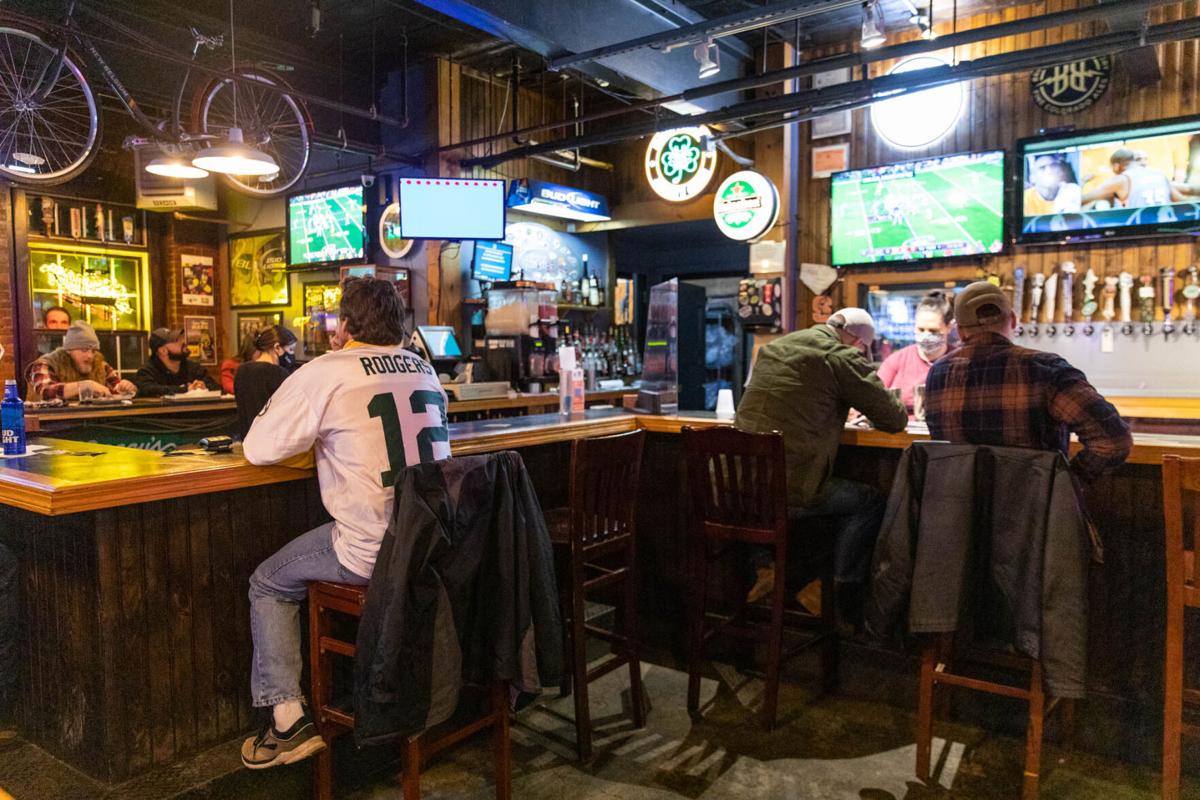 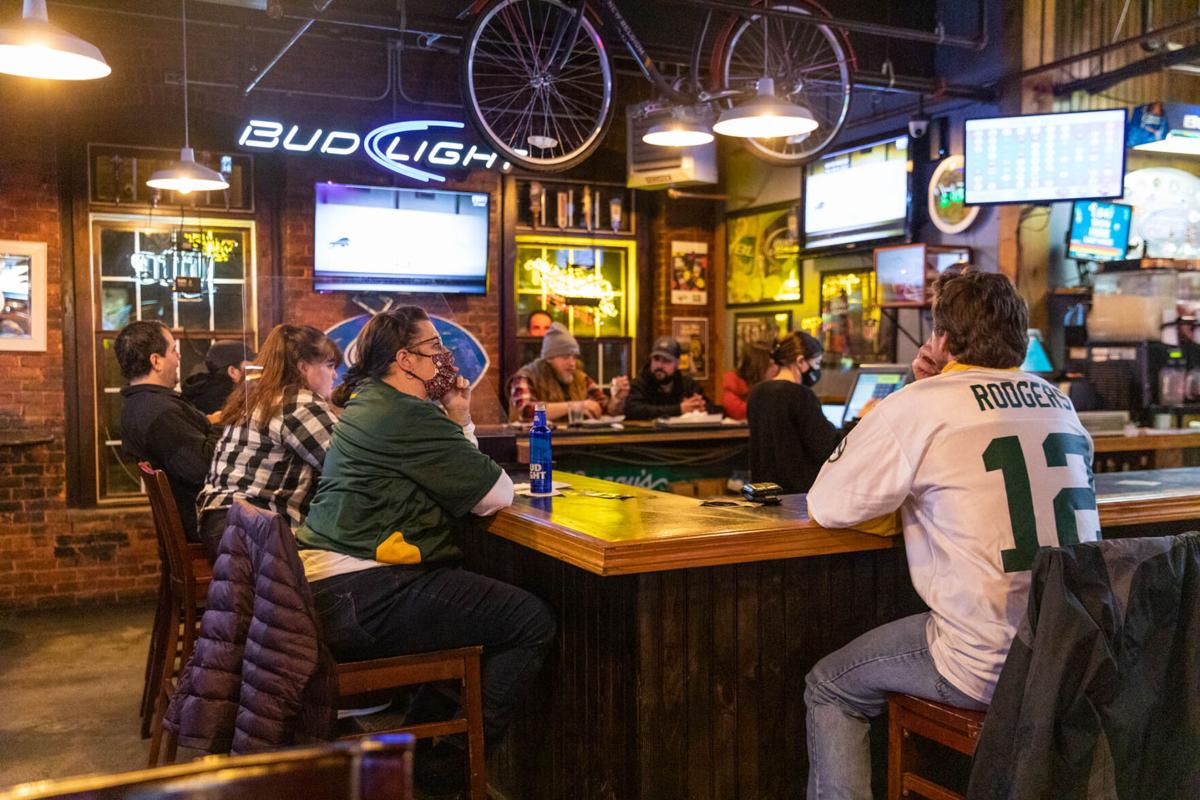 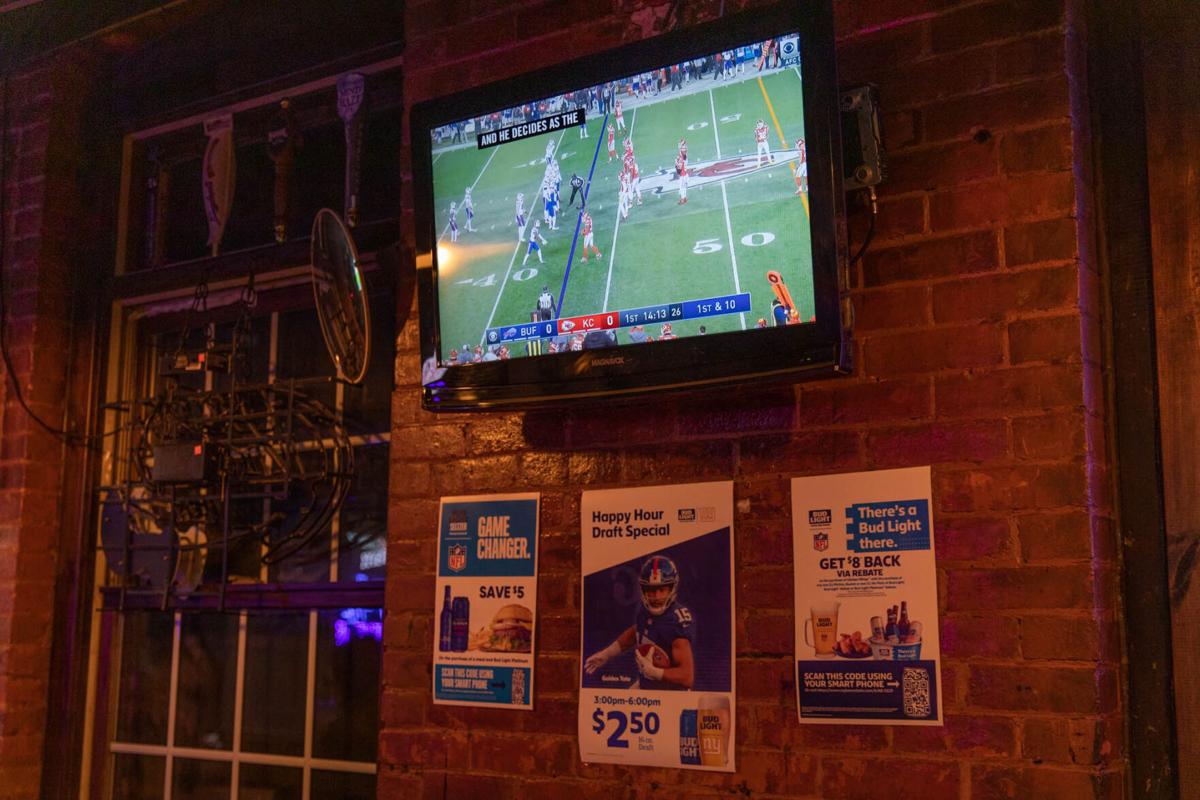 The Buffalo Bills play the Kansas City Chiefs in the AFC Championship game Sunday night, as seen on a TV inside Maggie’s on the River in Watertown. Sydney Schaefer/Watertown Daily Times 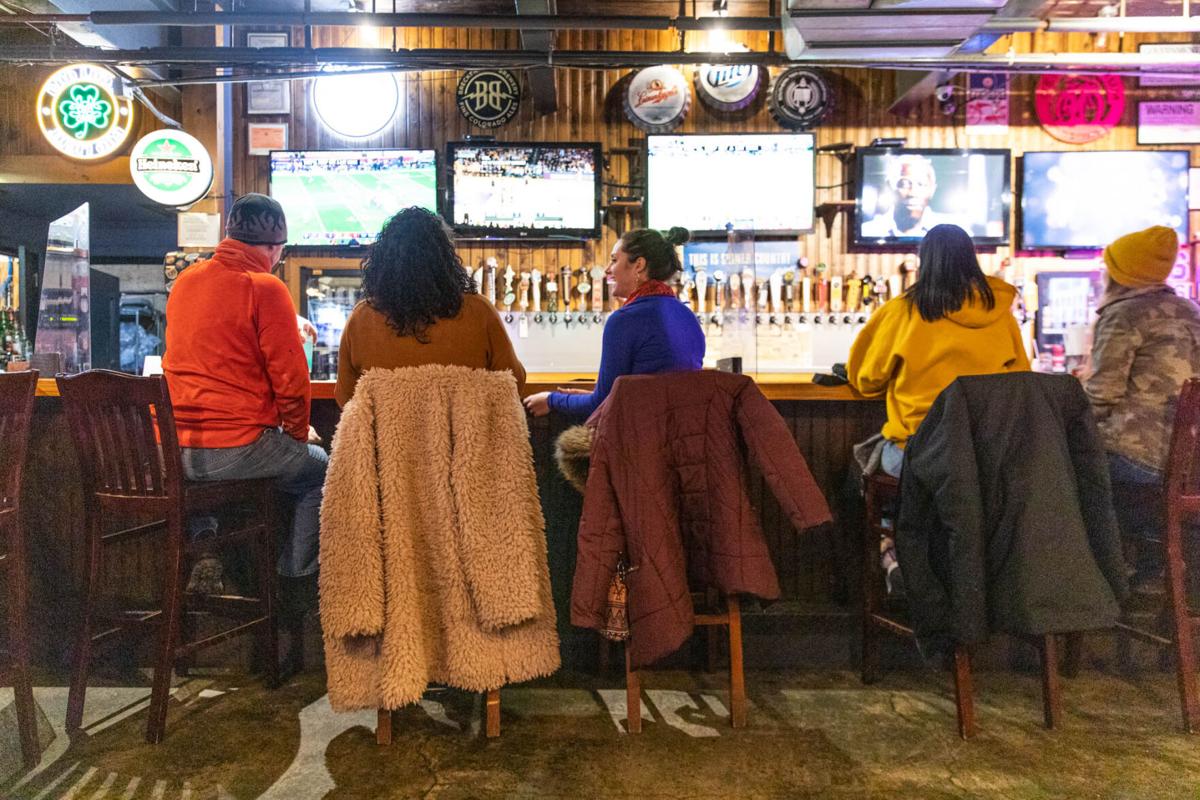 WATERTOWN — What would normally be a busy night for bars and restaurants during a normal year, tri-county establishments were surprisingly empty Sunday night.

There weren’t rows of people — head to toe in blue and red Buffalo Bills gear — lined up at the bar to get a drink as the television blared. Instead, relatively few fans turned out to watch the AFC Championship Game at bars across the region — a game that had the potential to send the Bills to their first Super Bowl in 25 years.

The Bills were defeated by the Kansas City Chiefs on Sunday night, 38-24. It was a matchup both teams had been waiting for since 1994, when the Bills defeated the Chiefs, 30-13, and advanced to Super Bowl XXVIII. They were ultimately defeated by the Dallas Cowboys, also 30-13.

Following Sunday night’s win, the Chiefs will advance to Super Bowl LV where they’ll play the Tampa Bay Buccaneers on Feb. 7. The Buccaneers defeated the Green Bay Packers, 31-26, earlier Sunday night — a game Maggie’s on the River manager Sarah Covey said saw a better turnout than the Bills game. She said the building was at capacity for the NFC Championship Game earlier in the evening.

For the 6:40 p.m. start time of the Bills game, the crowd had dissipated. About a dozen fans, some wearing Packers jerseys, sat huddled between plexiglass dividers at the bar, staring up at the televisions dotted around the bar on Newell Street.

It was easy to hear Ms. Covey over the other patrons and TVs as the crowd quickly thinned out.

“It was packed,” she said of the NFC Championship Game. “I couldn’t get another person at the bar or at the tables.”

Ms. Covey said she was anticipating the day would either be incredibly busy, or relatively sedate. The initial popularity made her think the day would be a busy one, but by the time the Bills game began, only about half the seats in the bar were occupied, and most of the dining room was empty.

Ms. Covey said she believes most people decided to watch the game from home because it was expected to run past 10 p.m. — when bars are required by law to close under New York’s COVID-19 restrictions.

“They could be in the car, on the way home, and something could happen (in the game) and they’d miss it,” she said. “I think a lot of people decided to watch from home instead because of that.”

Lacey Thompson, manager at Morley’s American Grill in Massena, said the bar was relatively busy at about 3 p.m. Sunday. Compared to a regular day, she said the restaurant had about as many people inside as it usually does.

The difference was the jerseys, she said, and the noise level. Over the phone, shouts and jeers could be heard echoing around the bar.

Ms. Thompson said they were able to space patrons out across the bar and restaurant, where they’re able to seat about 200 people altogether.

“It’s hard because we have to socially distance, but we’re doing well,” she said Sunday.

The bar kept its typical game night specials going, and Ms. Thompson said that was proving as popular as ever with game watchers.

In Potsdam, Saint Larry’s Bar & Grill offered only take out and delivery Sunday night during the big game.

Restaurant manager Ginny Hunter said the neighboring Elk’s Lodge recently had an outbreak of COVID-19, and as the two establishments share a decent number of patrons, they decided to close the dining room and make some renovations starting Jan. 12.

In Lewis County, at the Boondocks Restaurant and Bar in Lyons Falls, manager Linda Papszycki said the day looked like any other Sunday.

“It’s steady, not too busy at the moment,” she said.

While Boondocks doesn’t typically see a huge sports crowd, she said there were a number of people in the bar area watching the NFC Championship Game at about 6 p.m., and she expected they would stick around until they had to leave by 10 p.m.

“They like coming in to watch whatever is on just to get out of the house,” she said. “They do it to not be cooped up in the house.”