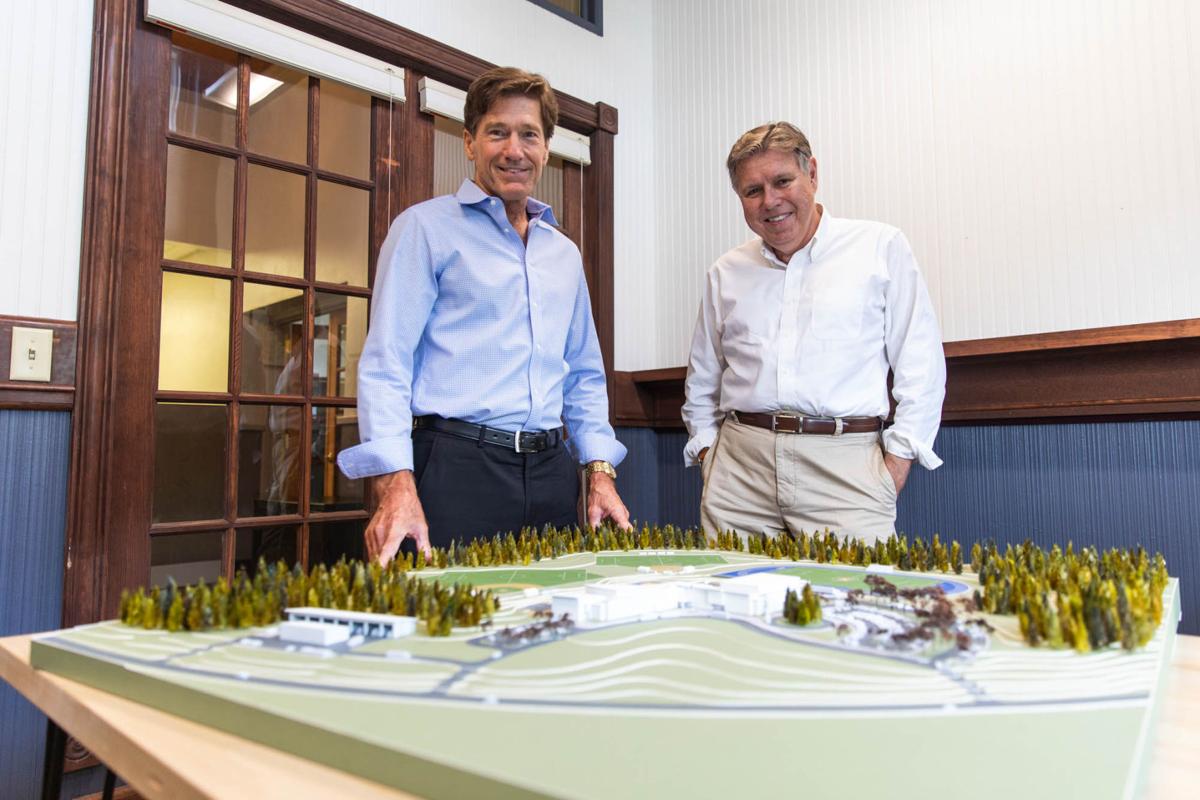 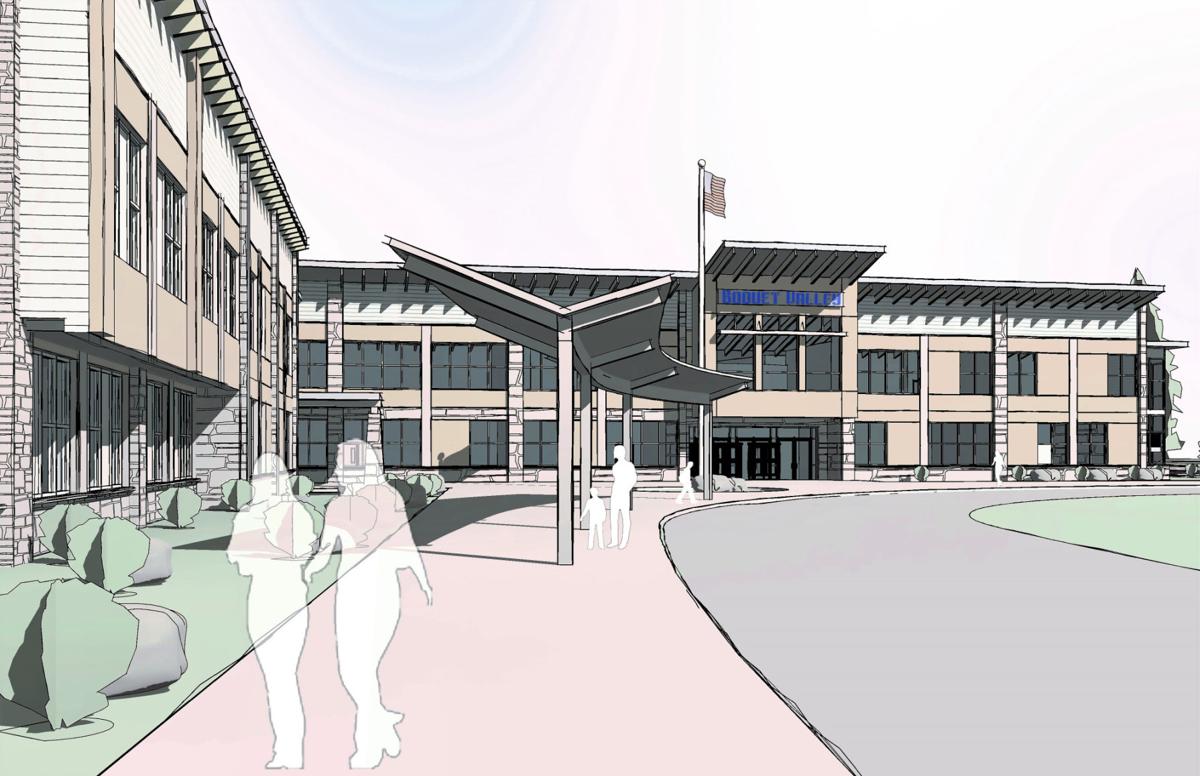 A conceptual view of the main Boquet Valley Central School District building to be designed by BCA Architects & Engineers. Courtesy of BCA 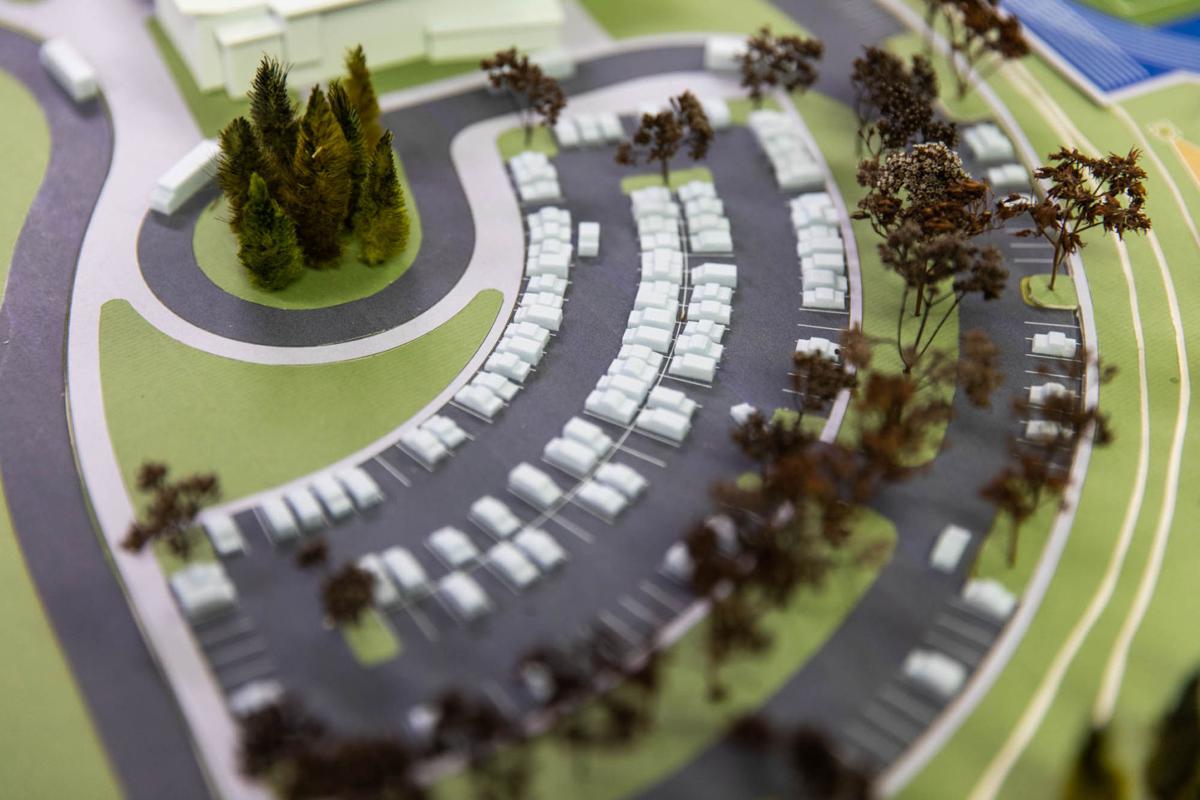 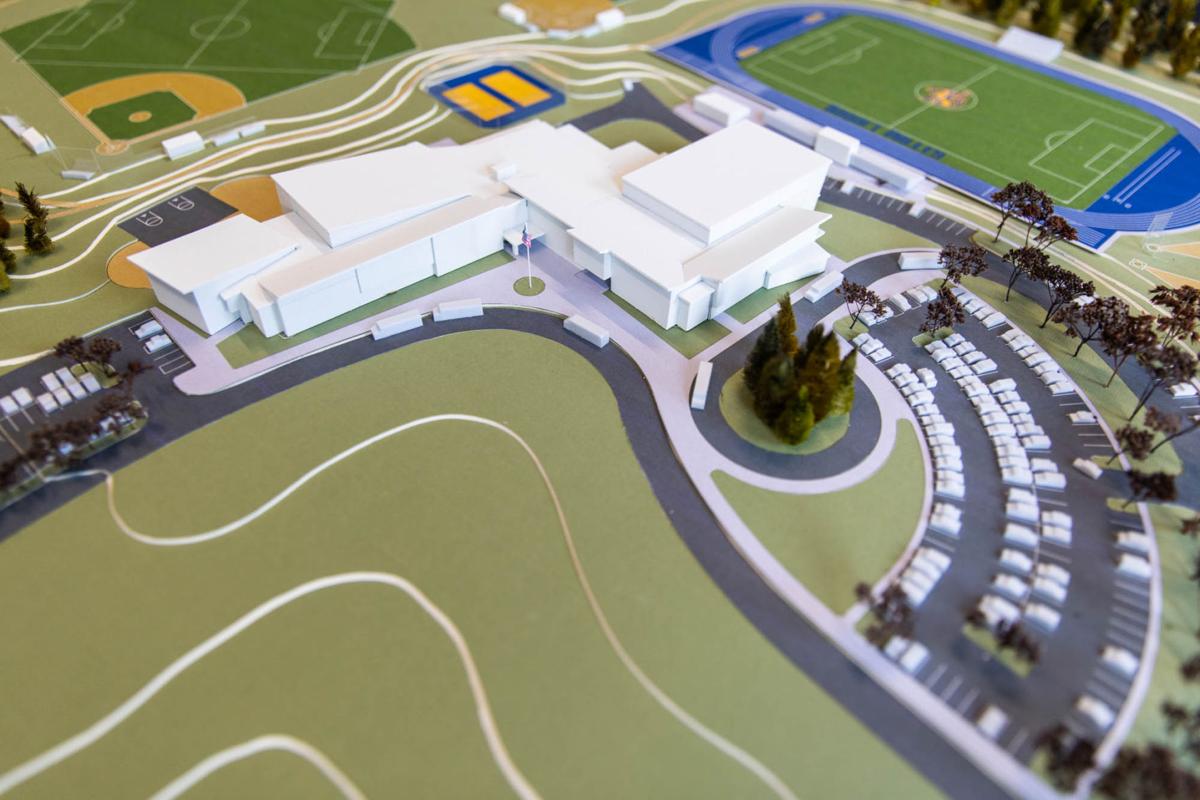 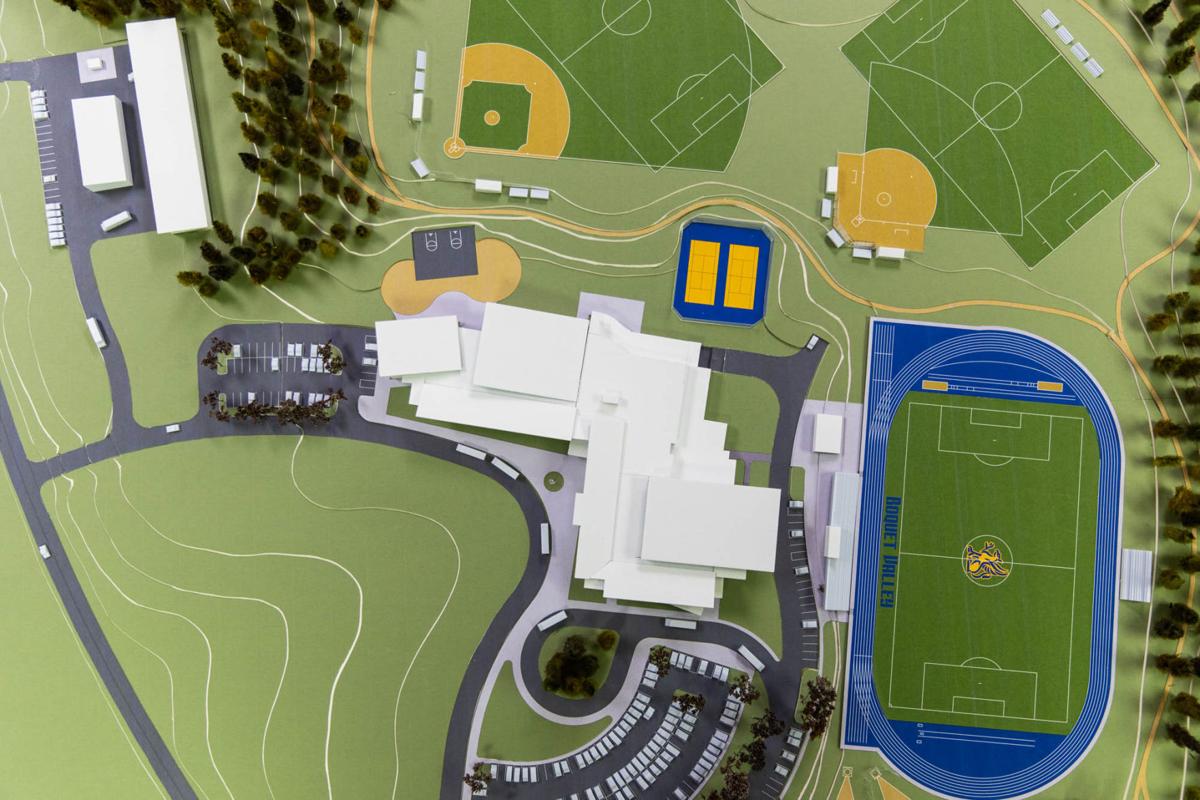 WATERTOWN — A local architectural and design firm, marking its 50th anniversary, has the opportunity to set a new standard for schools of the future after it was selected to design the newest school district campus in the state.

BCA Architects & Engineers beat out 13 other architectural firms for the win.

“It’s a big deal. And it’s a big deal for our firm,” said Kelly E. Reinhardt, director of business development at BCA, which currently works with 50 school districts across New York state.

“It’s not every day that a new school and grounds, fields, transportation facility, driveways, sidewalks, et cetera are built,” she said. “Everyone wanted this project, and we get to do it.”

The firm also proved its flexibility as it quickly adjusted to its employees working from home as it applied for the contract and pitched itself during the pandemic as to why BCA was the best company for the project, located in the Blue Line of the Adirondack Park.

Currently, there are 475 students in the two schools.

The plan is to create one building, with related amenities such as an athletic complex and support buildings, into one centralized location.

The district’s name, Boquet, (pronounced bo-ket) is named after the Boquet River that flows into Lake Champlain.

Despite incentives offered by New York, school district mergers/consolidations are rare in the state.

Boquet Valley Superintendent Joshua R. Meyer said his district’s merger is the first one in the state in 11 years and the third in 21 years.

But Mr. Meyer, a former principal at Westport Central and interim superintendent at Westport before beginning his new superintendent job on July 1, said the Elizabethtown-Lewis and Westport districts faced dire futures that helped to convince residents to vote for the merger.

“A lot of it came down to financial reasons where both districts had been cutting programs year after year,” he said. “They weren’t massive cuts. But we’re small enough districts where if you lose one teacher, one program each year, it adds up pretty quickly.”

The two buildings in the districts are nearly 100 years old each, he said.

“We need another building that’s going to last 100 years,” Mr. Meyer said. “The boards of education for the last 20 years or so have made decisions to save programming instead of doing some needed capital work in these buildings that could use quite a bit of work. We’re at the point where it just makes sense for a new centrally located building.”

After bids went out for the design of the Boquet Valley Central School campus, 14 bids were received before the February deadline, which was a pleasant surprise for school officials.

“Even for bigger districts in our area with big projects, they might get two or three firms that reply to their requests for proposals,” Mr. Meyer said.

A facilities committee helped to weed down the proposals to four and then two. The two firms were asked to answer five questions. Due to the pandemic, a community presentation plan was switched to submitted videos and BCA hired Well Said Media, Ithaca, to produce their presentation. BCA made a model of their proposal/design, which, because of social distancing, had to stay at its Saratoga Springs office. District residents who watched the videos were asked to answer survey questions. The two firms then faced a WebEx call with 15 questions. BCA, Mr. Meyer said, won out with their knowledge, background and more.

“They definitely had competitive pricing and they really took a community-based approach,” he said. “They want to get the whole community involved in there to help design this thing.”

“We’re excited to have been able to compete against so many fine firms in New York State,” said Michael J. Harris, lead architect for the project and BCA vice president of architecture.

“Having the opportunity to work with this district on their project will bode well for us in the future,” he said.

Mr. Meyer said school officials received an abundance of school industry information — “like from a firehose” — about the design of their new school and suggestions, including lessons learned about public education in times of a pandemic.

“We ended up adding that to one of our interview questions: ‘How do you see the design of school buildings changing?’” Mr. Meyer said.

“I know Bernier Carr has some extensive experience building hospitals as well,” Mr. Meyer said. “Not that we’re looking for like a sterile hospital facility. But we thought that there are certainly some technologies from the hospital setting, like ventilation systems for example, that could potentially could be used.”

Sanitizing and social distance may also play into the design, Mr. Meyer said.

“I think we’re fortunate looking to build a school right now where we can try to do some of these things from the start,” Mr. Meyer said.

“We’re building a school for the future of education but we’re also building it to incorporate everything we’ve learned over the past four months about the healthfulness of a facility and how we need to guard and protect the kids against the potential spread of viruses and such,” Mr. Harris said.

Mr. Harris said BCA will likely call upon outside experts, such as a virologist, as it plots out the school design — quite different from its previous school projects.

“This is an opportunity to start fresh with a clean slate and develop the 21st century school,” he said.

Mr. Harris anticipates it will be a four-year process from planning to building, with students and staff moving into the building in 2024.

BCA has begun “programming meetings” with Boquet Valley district officials about the physical needs of the main building and support buildings. A site hasn’t been selected, but architects and school officials met with a Realtor in late June to evaluate “four or five” properties within the district, Mr. Harris said.

“Whatever one that has the best characteristic and the right location, we’ll design to fit that site,” Mr. Harris said. “Everything is determined and developed with the district at the table. It’s their building, not ours.”

Mr. Harris said the local environment of the Boquet Valley area is impressive.

“They’re got the mountains, they’re in the High Peaks region,” he said. “They’ve got Lake Champlain, the Boquet River and wilderness.”

Also, Elizabethtown and Westport have certain historic aspects to them, he noted.

“There’s a lot of design cues that we will take off on or will consider when we’re putting this building together,” Mr. Harris said. “Obviously, we want it to have an Adirondack flair to fit the region and geography.”

Mr. Meyer said that the joining of the two district was a “consolidation/merger” rather than an “annexation” where one district disappears. He said there were a couple of key factors that caused residents in the two districts to approve the one-district plan.

“We had been sharing sports teams for seven years prior to the merger,” he said. “And we shared plenty of faculty and staff.”

Also, the two buildings in the districts were only 8 miles apart and both schools had a similar amount of students.

To deal with budget cuts, the districts faced eliminating positions and even “tuitioning out” high school — paying another district to educate those students.

“We were looking at pretty drastic solutions anyway,” Mr. Meyer said. “The merger was a dramatic solution, but it was one that once community members really understood what we were dealing with, they became supportive.”

That support was also swayed by funding, such as the state’s Merger Incentive Operating Aid, which is different for each school district.

“For us, that ends up being six-and-a-half million dollars over 15 years,” Mr. Meyer said.

“We get reimbursed up to 91 percent on projects,” Mr. Meyer said. “That’s huge for us.”