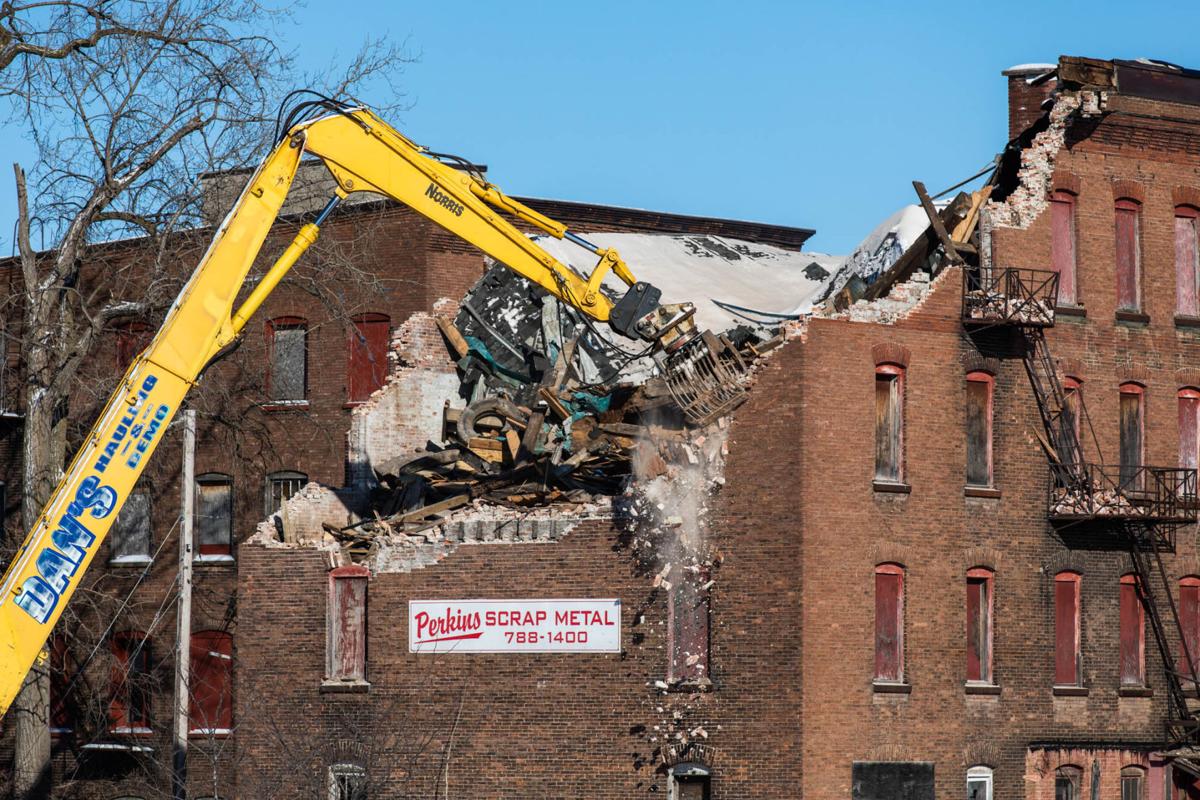 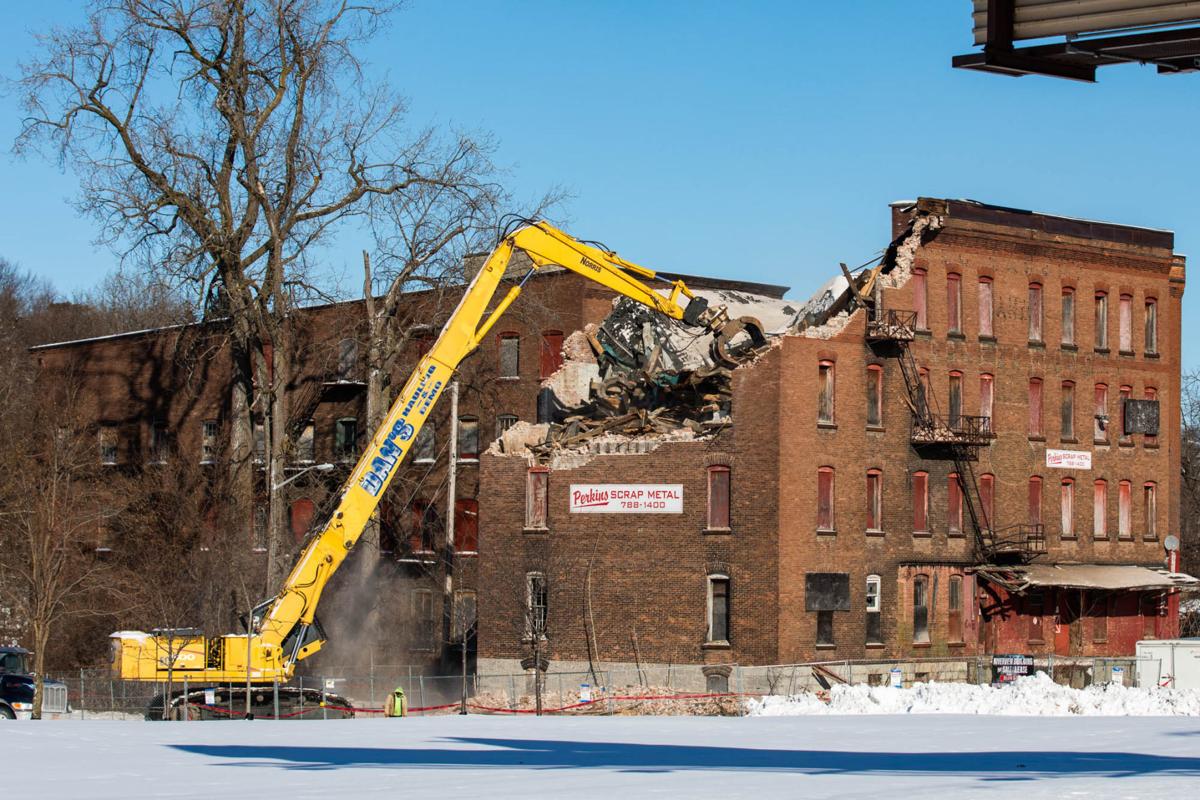 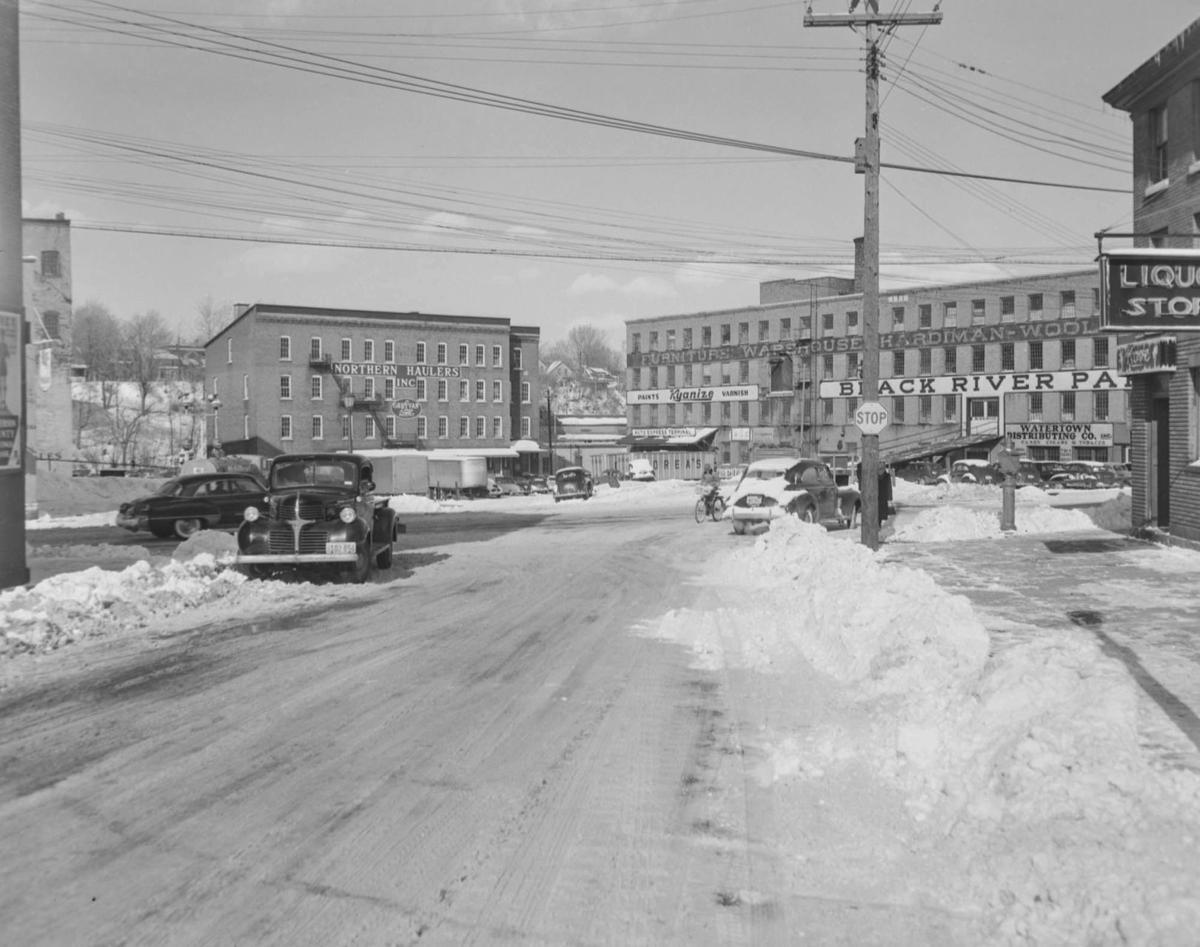 WATERTOWN — Steven A. Perkins just wants to be rid of a dilapidated Factory Square building near the Black River Paper Company, which he owns.

That day finally came on Monday.

Demolition began shortly before noon on the four-story landmark at 129 Factory Square, once the home of a Nabisco bakery that made shredded wheat and sandwich cookies, the precursor to Oreos.

Standing in the cold on Monday, he watched a large demolition crane with a claw take the first bites out of the building.

Last January, city firefighters were performing exercises on a ladder truck and noticed that the roof had collapsed. The city’s Code Enforcement Bureau determined the building was unsafe and condemned it.

“I’ve been waiting for this day to come because it was going to come down on its own if this wasn’t done,” Mr. Perkins said.

Project superintendent Angelo Mitchell for Abscope Environmental, Canastota, said the building should be down by the end of Tuesday. Hired by Abscope, Dan’s Hauling and Demolition is doing the work.

“These guys do these kinds of jobs all time,” he said.

Once the building comes down, it will take about two weeks to clean up the site, Mr. Mitchell said.

With the paper company at that location since 1898, Mr. Perkins, who says he knows a lot about local history, said both the sandwich cookies and shredded wheat were invented right here in Watertown and were made in a bakery in the building.

According to a 1928 article in the Watertown Daily Times, a local man, John Perkey, came up with the breakfast biscuit in 1898, with the help of Air Break engineer, William Henry Ford.

In the end, Niagara Falls later claimed shredded wheat all for its own, and it’s been there ever since.

While it has historical significance, the building could not be saved because the hole in the roof caused the top three floors to cave in and fall on top of themselves, said Michael A. Lumbis, the city’s planning and community development director.

“I think it’s unfortunate, but it has to come down,” he said.

In April, the city filed legal action against the owner of the property in an attempt to have the owners clean up the site. The dilapidated building is owned by Jim Cox, who owns a neighboring business, Seaway Sales.

The city had ordered the building’s owner to demolish it, but he failed to do so. The city will bill its owner, 129 Factory St. LLC, $165,325 to tear down the condemned building.

The old Nabisco plant was once nestled among several buildings that made up a sprawling complex owned by local automobile manufacturer H.H. Babcock and was known as Factory Square, a 400-acre former farm incorporated into the city in 1855.

The main five-story Babcock building was demolished in 1979. Some of the car manufacturer’s structures remain, including Mr. Perkin’s paper company.

And now city officials are focusing efforts to revitalize the manufacturing hub. Four consultants are about to embark on a study to see how that area of the city can be redeveloped.

After the old Nabisco building is history, the city will explore how the site can be reused, Mr. Lumbis said.