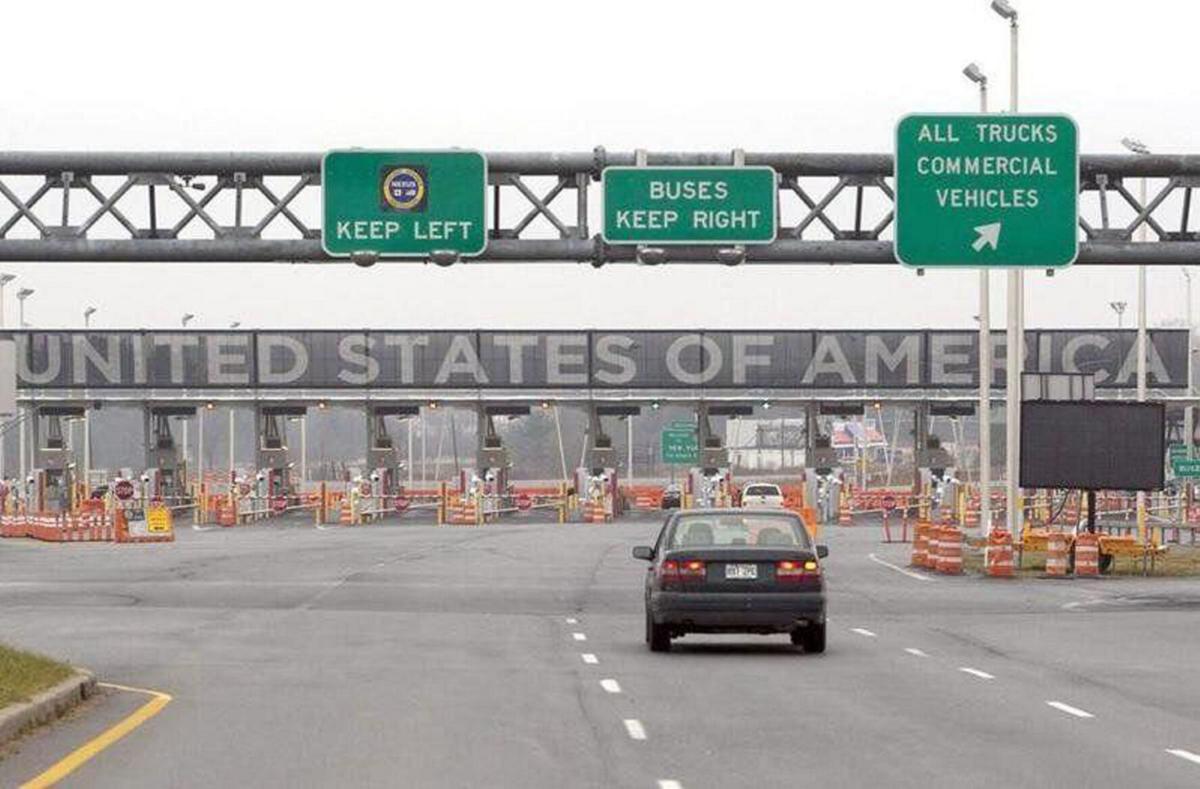 Cars enter the U.S. from Canada. Photo provided to the Press-Republican 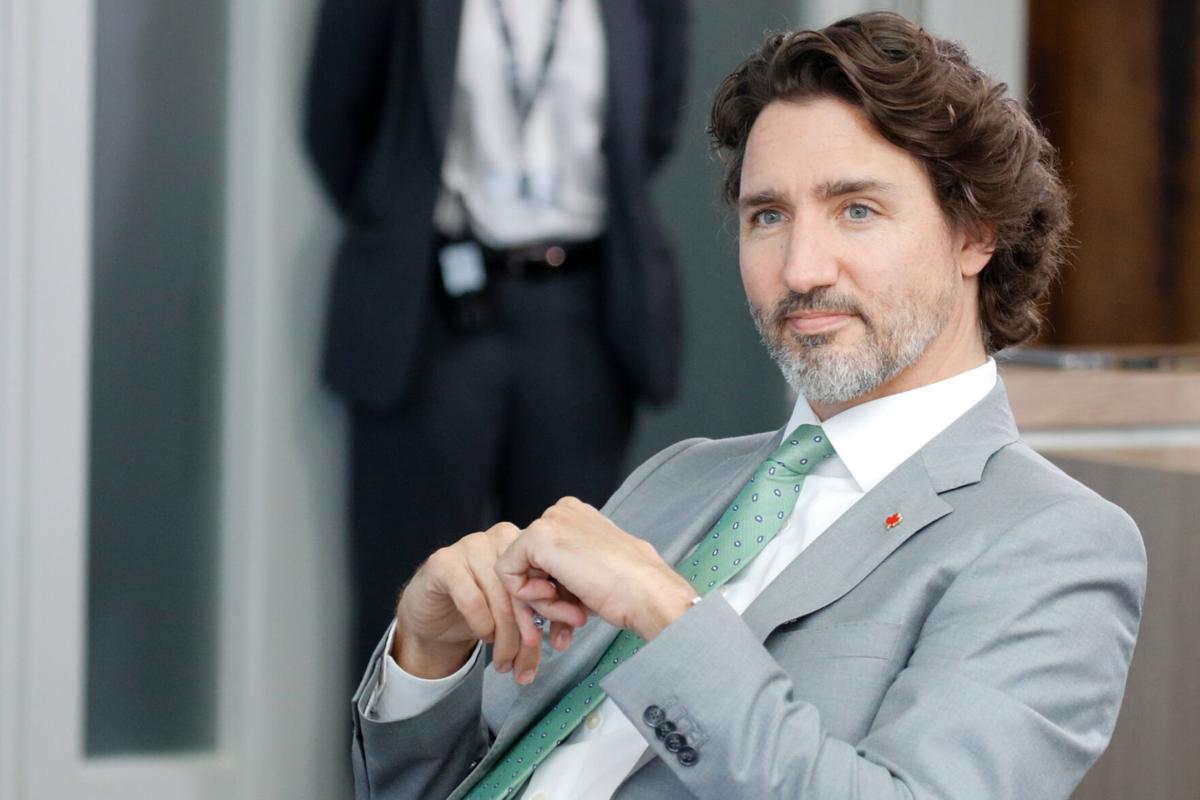 Canadian Prime Minister Justin Trudeau attends a session during the G-7 meeting on June 13 in the United Kingdom. Phil Noble/TNS

Cars enter the U.S. from Canada. Photo provided to the Press-Republican

Canadian Prime Minister Justin Trudeau attends a session during the G-7 meeting on June 13 in the United Kingdom. Phil Noble/TNS

PLATTSBURGH — Insulted by years with no contract, Canada’s Customs and Immigration Union is threatening to go on strike, something North Country Chamber of Commerce president and CEO Garry Douglas says is “of great concern” as talk of a reopened border ramps up.

“Not only would it distract Canada from current consideration of phased progress on renewed nonessential travel across the border, it could seriously disrupt the bi-national supply chains which require Canada Border Services Agency processing at our crossings,” Mr. Douglas said, referencing continued commercial crossings at the land border.

“There are hopes that voting to authorize strike action is at this point a tactic to strengthen the union’s hand, but it is something we will continue to pay close attention to while keeping our companies as informed as possible.”

Though many officials thought a phased reopening of the border might happen soon, the Canadian government on Friday again extended the border closure to nonessential travel until at least July 21.

Both Democratic and Republican elected leaders in New York disagreed with that move.

“Instead of endless delays and confusion, we need a concrete plan, based on science and facts, to reopen the northern border for vaccinated individuals,” U.S. Sen. Chuck Schumer, D-N.Y., said in a statement.

Rep. Elise Stefanik, R-Schuylerville, called it “absolutely unacceptable to the families, businesses, and communities along the northern border.” She has called on U.S. President Joe Biden to unilaterally start reopening the border.

“President Biden missed a huge opportunity at the G-7 summit to stand up for America and deliver a plan to safely reopen, instead caving to Prime Minister Trudeau’s incessant desire to delay,” Stefanik said in a statement.

“It is unconscionable that there continues to be no plan forward from the federal governments to reopen the border,” he said in a statement. “This continues to have a significant impact on our regional economy, and action must be taken to ensure this vital lifeline to our friends and families is safely opened.”

The land border was first closed to nonessential travelers in March 2020 at the height of the COVID-19 pandemic.

Given the economic hits to border communities and continued vaccination progress, Northern New York leaders have stood ready to discuss the phasing out of Can-Am border restrictions for months, urging Canadian counterparts to join the conversation and help pen a plan.

Canadian leadership was reportedly hesitant, but showed initial signs of progress just last week when Public Safety Minister Bill Blair cited the potential for some border restrictions to lighten next Tuesday, the day after current restrictions will expire.

Ottawa-based newspaper National Post this week reported that Intergovernmental Affairs Minister Dominic Leblanc suggested July could be the start to a gradual reopening, with reopening dates coming as soon as this week.

But on Friday, the Canadian government again extended the border closure until the end of July.

Prime Minister Justin Trudeau has said his nation would loosen widespread health restrictions, like those in place at the border, once 75% of the Canadian population received at least one dose of the COVID-19 vaccine and 20% were fully vaccinated.

As of Thursday, just over 70% of Canadians age 12 and older had received at least one vaccine dose and 9% were fully vaccinated. About 61% of the total population had at least one dose.

Trudeau told reporters on Friday, when asked about the border closure extension, that he understood people’s “impatience.”

“But from the very beginning we as a government have been there for Canadians and that means doing what’s necessary to keep them safe,” he said.

Customs and Immigration Union National President Jean-Pierre Fortin said his union, comprised of 11,000 Canada Border Services Agency employees, has been “very patient” in the three years it has been without a contract settlement.

“They’re not very happy with the level of respect that is being demonstrated right now by the Canadian Government,” Fortin told the Press-Republican Thursday. “They’re saying that when it was the time, they were there to protect Canadians during COVID for the past 15 months. They were on the frontlines (and) they did try to keep Canadians safe to the best of their ability.

“But now time has passed. There are talks now of the border reopening and immediately it, kind of, triggered, ‘Hey. What about our contract now?’”

Canada Border Services Agency is one of the largest armed forces in Canada, second only to the Royal Canadian Mountain Police. Fortin said national leadership recently settled a contract with that agency, further rubbing salt into the wounds of his border officers.

To strike, the union needs a majority, equal to 51% or more, of its members to sign a mandate.

Voting began Wednesday and Fortin expects it to wrap up in a week or two.

The union sought a contract “somewhere in the middle” of those of other Canadian law enforcement agencies.

Of the terms it’d like to see is a paid meal period, which, Fortin said, is standard among law enforcement.

“That’s because if something happens, we do have to intervene immediately. It’s part of almost all police forces in Canada, including correctional services.”

The union is also pushing for adjusted discipline language.

“Right now, one thing that is happening, if one of our officers is suspected of wrongdoing, they’re being sent home with no pay immediately and sometimes it takes up to a year to complete their investigation,” Fortin explained. “We’re saying there should be some kind of a presumption of innocence before sending somebody home with no pay.

“They need to have some kind of a fact finding or an investigation that takes place and then based on the investigation if further action is required, then it is what it is.”

While he did not give specifics regarding what a strike at the border would look like, Fortin said safety would remain the top priority.

“I want to be extremely clear, as the national president of this organization, we’re not going to be compromising the health and safety of the public on the U.S. or on the Canadian side.”

He said the union would likely make themselves “more visible” in ways that “may have an impact on travelers.”

Asked for further details, Fortin said those would be planned once a majority of union members signed the mandate.

“Our Prime Minister is looking at slowly reopening the border. They’re saying that they will need our help, that it will need some flexibility from the officers in order to achieve the reopening of the border. Without the complicity, or the good will of our officers, it could be a bit tougher. The officers won’t be as inclined,” he said.

“One bright spot in the U.S.-Canada economic partnership through the last year has been the full continuation of trucking and commerce without interruption, keeping most manufacturing going and forming a bedrock for bi-national economic recovery post-pandemic,” he said. “Any interference with this dynamic, even if in the form of work slowdowns which have been done at times in years past, would have a very negative impact on the U.S. economy nationally and upstate New York in particular.

“And it’s not only manufacturing that would be impacted. Here in the north country, many commodities such as fuel and cement and asphalt, for example, come to us from Quebec. Even short-term closures or unnecessary slowdowns would foul up schedules and inventories of many kinds.”

Fortin and his fellow union membership called on the Department of Treasury to return to the bargaining table to come to an agreement.

“We’re prepared to go back to the table, like, tomorrow morning.”

The prime minister, who is in quarantine after a trip to the U.K. and Brussels to attend international summits, provided some detail about the government’s plan to ease restrictions. Trudeau said the first phase is to allow fully vaccinated residents to upload proof of inoculation onto a mobile phone app that travelers are already required to use in order to enter the country. That will allow them certain exemptions to quarantine rules.

The second phase would include the creation of a national certification program that would be recognized around the world and allow Canadians to travel abroad.

“It’s disappointing because it flies in the face of science and is unfair to Canadians who are being denied the ability to travel, and it’s obviously very damaging to us economically as well,” Perrin Beatty, president of the Canadian Chamber of Commerce, said in a phone interview. “It’s another nail in the coffin for the summer tourism season for Canadians.”

Bloomberg News contributed to this report.

March 2020 was not the height of the pandemic but the beginning.

“President Biden missed a huge opportunity at the G-7 summit to stand up for America and deliver a plan…” put out Border Czar on it. She’ll come up with a plan, tailored after her southern border plan. Nothing!