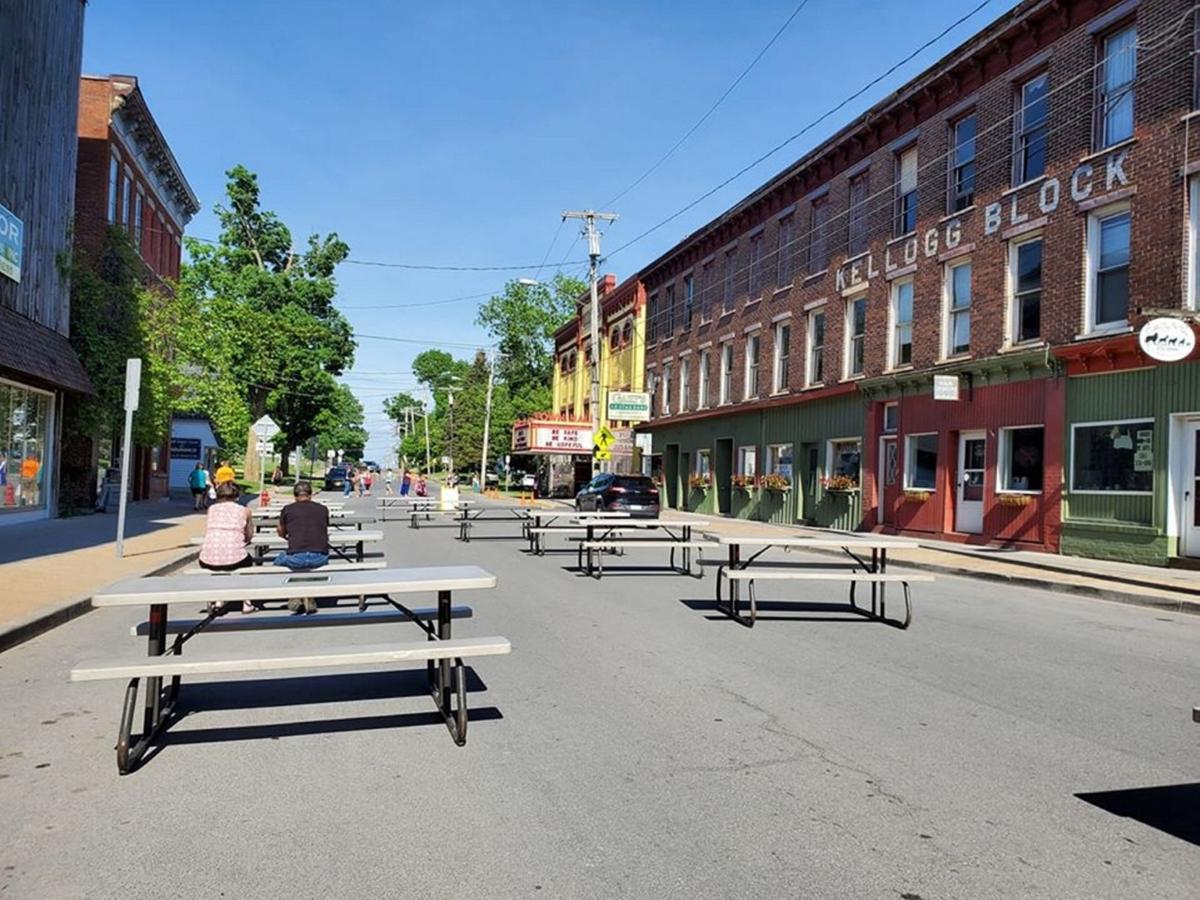 The food court set up on Shady Avenue in Lowville from June 5 to 7 was created to attract more people to local restaurants shortly after state approval for outdoor seating was granted. Provided photo 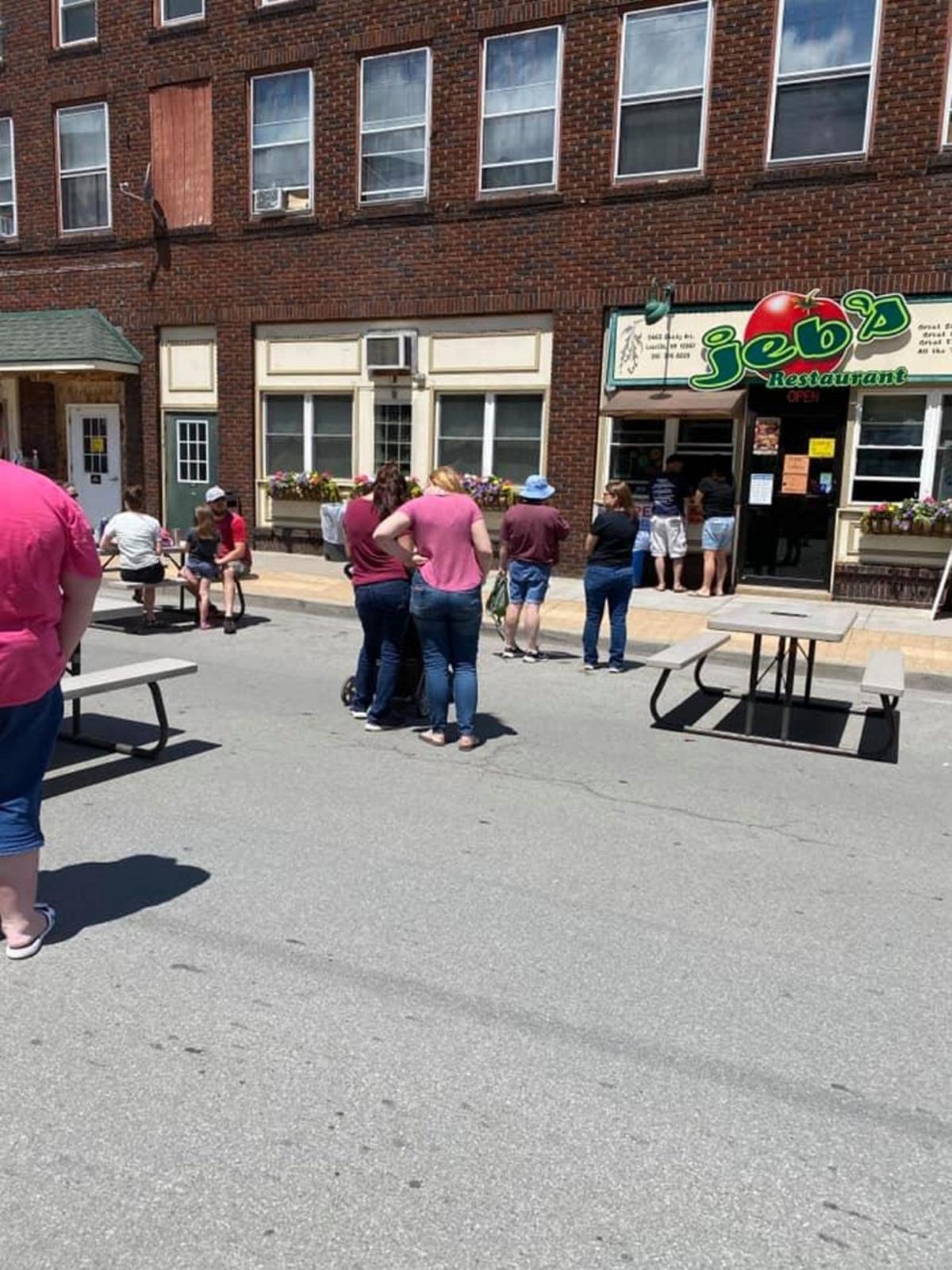 An impromptu food court was set up on Shady Avenue near State Street in Lowville on June 5 to 7, in response to outdoor seating being allowed as part of the economic re-opening in the state. Most people, however, did not practice social distancing or wear masks as requested. Facebook

The food court set up on Shady Avenue in Lowville from June 5 to 7 was created to attract more people to local restaurants shortly after state approval for outdoor seating was granted. Provided photo

An impromptu food court was set up on Shady Avenue near State Street in Lowville on June 5 to 7, in response to outdoor seating being allowed as part of the economic re-opening in the state. Most people, however, did not practice social distancing or wear masks as requested. Facebook

LOWVILLE — The business owner who benefitted the most from the impromptu food court on a closed portion of Shady Avenue two weekends ago told the village board it did more harm than good.

“We appreciate the ideas behind it. We appreciate they want to see businesses succeed. Our take on it is, it’s not helpful,” said Emerson Metzler, co-owner of Jeb’s Restaurant, in the village board’s June meeting on Wednesday before offering a list of problems the food court created for his business.

The food court — brainchild of County Manager Ryan Piche — was created by closing about 450 feet of Shady Avenue to traffic from June 5 to 7, to support local eateries after Gov. Andrew Cuomo announced restaurants could have outdoor seating with social distancing measures employed.

The biggest challenge for Mr. Metzler’s business came from the food court’s popularity: the volume of the demand was larger than Jeb’s five-person kitchen could handle. He was also upset that people held him responsible for the seating area and accused him of getting special treatment, implying the food court was exclusively for Jeb’s.

The outdoor seating was organized cooperatively by the county, Economic Development and the Chamber of Commerce with approval from the village.

Organizers emphasized food from any restaurant could be brought to the tables and that the area was not affiliated with one restaurant despite its location.

Overall, however, the public response was positive causing the Chamber to ask the board to continue the Shady Avenue food court every other Saturday and to make it an “open container area” so alcohol beverages could be consumed with meals.

Mr. Beagle floated the public parking area across from Shady Avenue’s intersection with State Street as an alternate location which had a number of supporters, including Mr. Metzler, because it would be more neutral and could potentially have tables set up all summer rather than bi-weekly.

Other restaurants are open to that location, but have reservations because of the number of people who refuse to wear masks and practice social distancing.

“That’s a more neutral spot, so maybe it will work,” according to Eva Carbonero who said she and her father, owner of New York Pizzeria Carmello Carbonero, spoke about the issue. “That wasn’t social distancing [on Shady Avenue] and people were not wearing masks, so I don’t agree with [the food court idea].”

Trustee Dan Solomon also had more reservations than support for the parking lot idea primarily out of safety concerns for people crossing at what is known as the “four corners” intersection, especially with drinks.

“When you’ve got people walking across the busy four corners and you’ve got tractor trailers coming into the village that don’t seem to know what a red light is, I think you’re asking for a possible disaster.”

Some restaurants, like Tony Harper’s Clam Shack, have “worked hard to do what we can do” to create their own outdoor seating to mitigate restraints on indoor tables, but feel the food court is good for the community, according to a spokesperson.

The topic was shelved for the time being, however, Mr. Widrick will collaborate with food court organizers to consider options going forward.

If a village board member thinks there’s potential danger with pedestrians crossing the four corner intersection due to traffic running red lights, wouldn’t the solution be to have the three different law enforcement agencies in town do a better job patrolling the area and actually start pulling cars over and writing tickets?