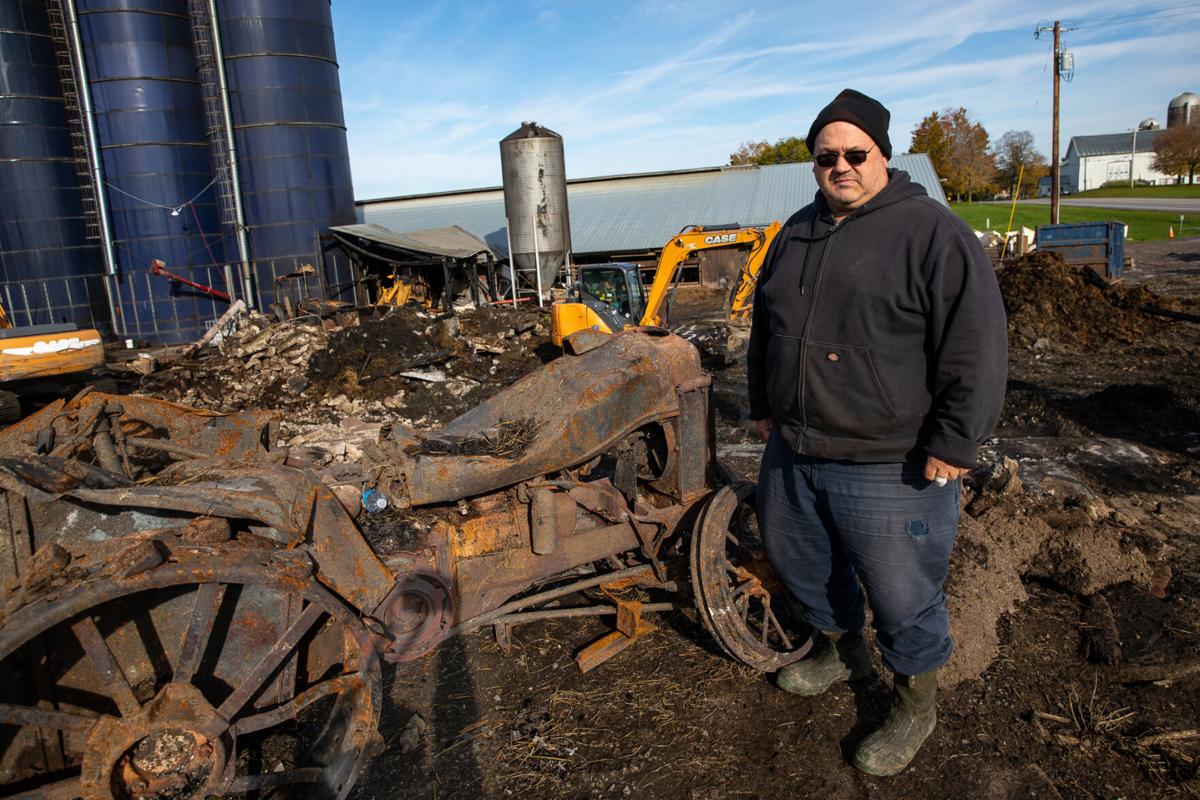 Bill Eastman, part owner of Eastman Dairy Farm in Ellisburg, stands next to the charred remains of the old barn that went up in flames last Thursday on Route 93, pictured here on Wednesday morning. Kara Dry/Watertown Daily Times 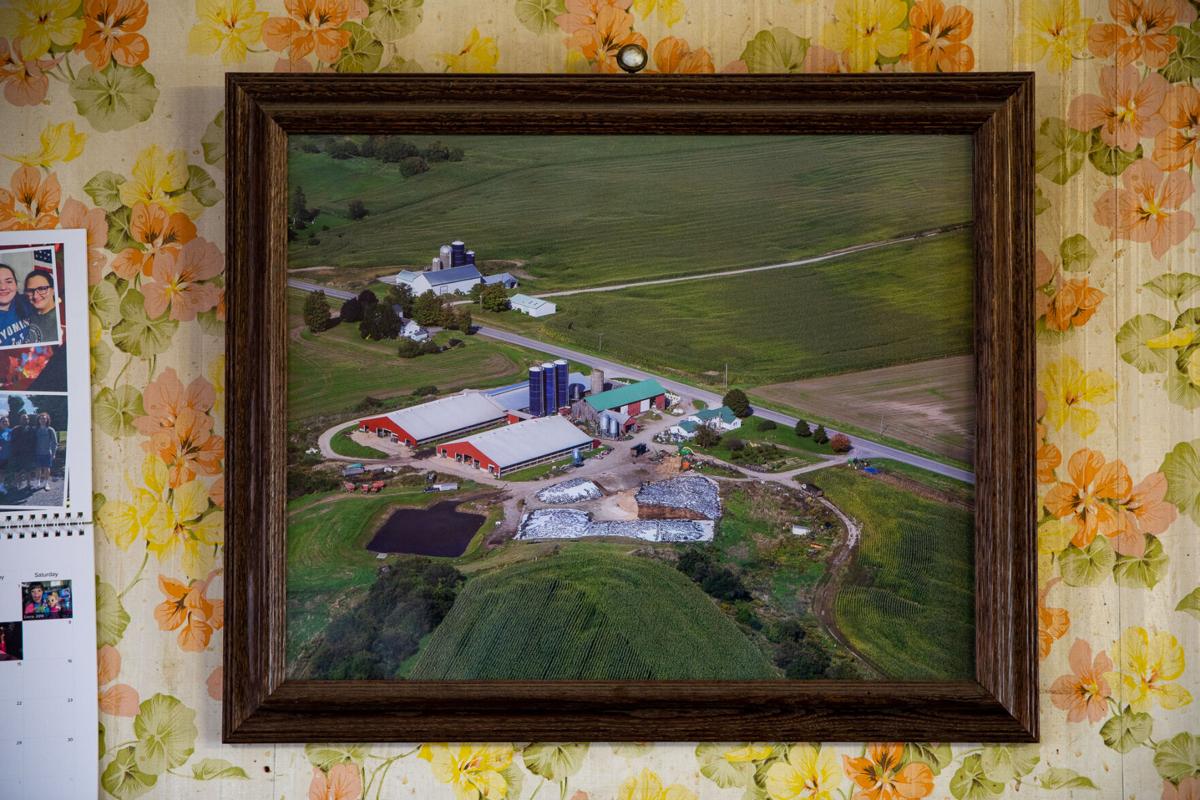 The old barn with the green roof, that was destroyed in a fire last Thursday, can be seen in an aerial photograph of the Eastman Dairy Farm in Ellisburg, hanging in the farmhouse on Wednesday. Kara Dry/Watertown Daily Times 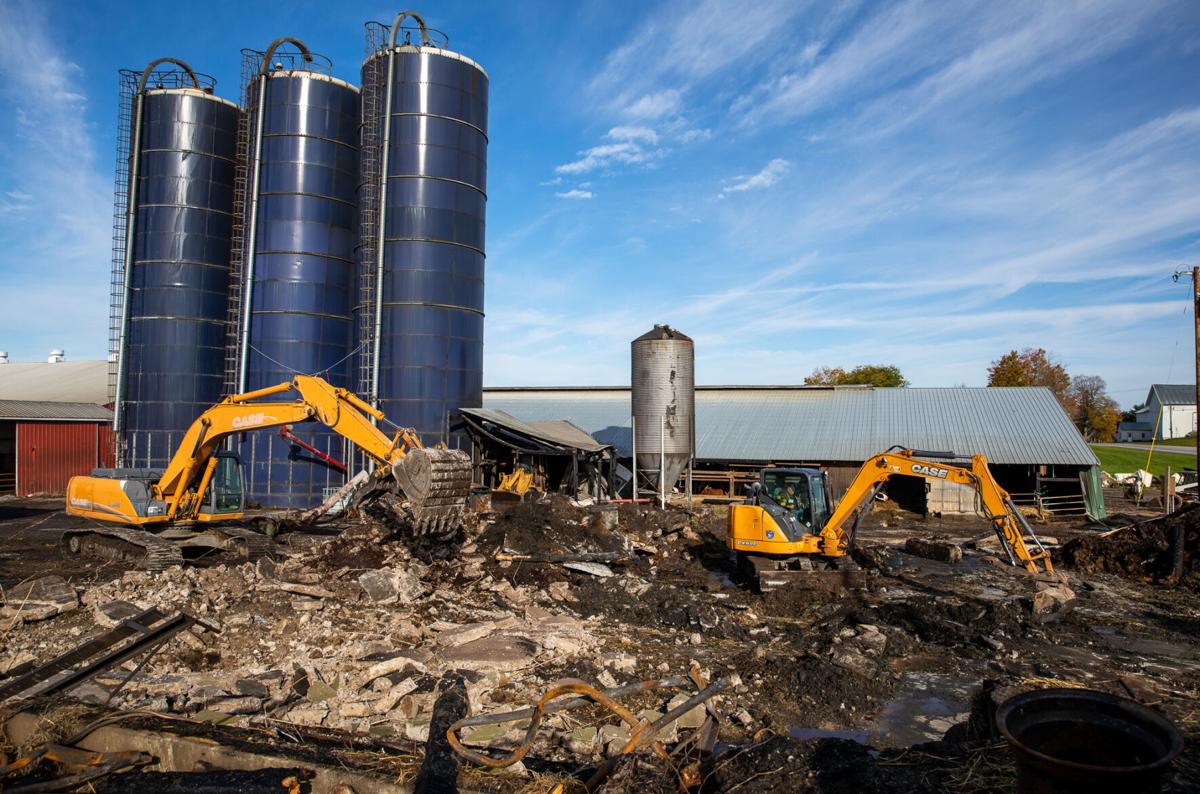 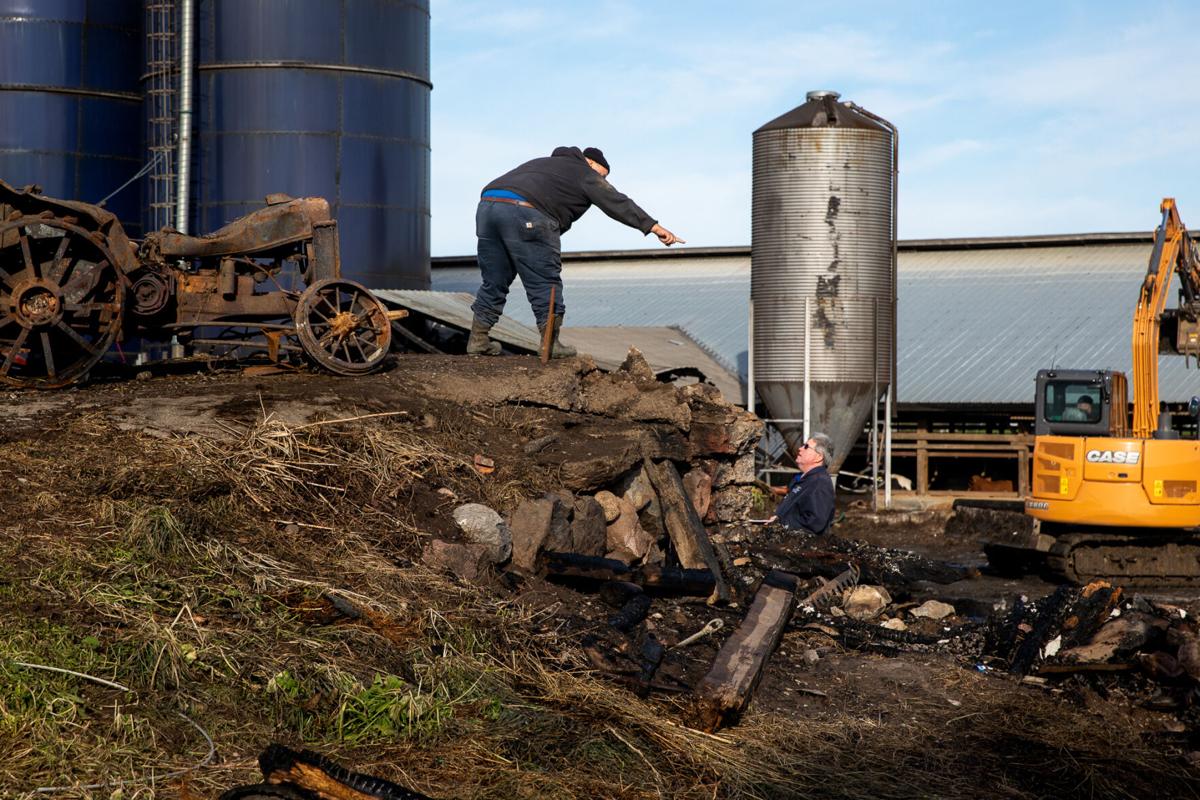 Bill Eastman, part owner of Eastman Dairy Farm in Ellisburg, speaks with an insurance adjustor next to the charred remains of the barn that went up in flames last Thursday on Route 93, pictured here on Wednesday morning. Kara Dry/Watertown Daily Times

ELLISBURG — The Eastman family found themselves wondering who was going to feed the calves each night after the disaster, almost forgetting for a moment that more than 200 died in a fire last week.

A fire last Thursday at a respected dairy farm in Ellisburg resulted in the loss of not only cattle but thousands of pounds of milk and several pieces of equipment. It also showed the resolve of the family who owns it. They were devastated to see the death of so many young calves, which were future milking cows, but that part was over. They couldn’t control it. They could control the milk operation, which had to keep operating or they would face serious issues.

“We took the best care of the animals that we could, and you have to make a decision,” said Bill Eastman, one of the owners. “If you are devastated after every single animal, you’d be laying in a puddle every day it seems like.”

The Old Barn on the Eastman Dairy Farm is surrounded by the milking parlor, silos and the owners’ childhood home, underscoring that the disaster could have expanded and been much worse. Mr. Eastman, who’s partners in the business with his mother, Donna, and two brothers, Roger and Robert, was home eating dinner with his family when he got the call on Thursday. He drove over there and found his 16,000-square-foot old barn fully engulfed. There were 160 calves ranging from 2 months old to a year old inside. They were in the stable on the first floor, while the combustible hay was stored on the second floor. The fire collapsed the second floor onto the first, resulting in the death of all 160.

There were nearly 60 more head of youngstock outside in small, white huts. That is where the calves are housed the first two months of their lives. Roughly 40 of them died in the fire, but neighbors who stopped to help were able to let around 20 loose. In the end more than 100 friends, neighbors and firefighters were at the scene of the fire. They developed almost a network of help for the Eastmans in the hours afterward, providing them anything from generators to feed — or just support.

“Everybody says they’re sorry and asks what they can do,” Mr. Eastman said. “It almost makes you want to cry. It’s a good feeling, but we also got it. If there’s something we need, we’ll ask.”

The cattle that died were going to be replacement dairy cows for their current herd. Since the Eastmans raise their own dairy cows, the old barn held the younger calves before they graduated onto other stables with the older cattle.

“What we lost is the future, but it’s OK,” Mr. Eastman said. “You have to modify what you’re doing.”

It appears that getting hit with an obstacle and joking has been Mr. Eastman’s response to the fire even while it was happening. Namely, he had to get the water system in the other barns back on after the power went out during the fire. He ended up connecting the water system to the farmhouse through a breaker that was powering one of the ovens inside.

“My mom was good with that because we have three ovens,” he said.

Mr. Eastman also thought of the milk they already had in the tank during the fire. There was roughly 38,000 pounds, or 4,400 gallons, waiting to be shipped. He realized that the smoke that was blowing up against the tank would end up tainting the product. “The problem with milk is it will suck any odor,” he said. “If you put an open jug in the fridge and put an onion in there, the milk will come out with an onion flavor.”

He decided not to ship the raw milk to Great Lakes Cheese or Kraft and instead dispose of it in their manure pile.

“Of course you can add the humor and say ‘Well we’re going to have smoky cheese,’ but I think Great Lakes wants to put their own flavor to it,” he said. “I mean, you’ve got to laugh about stuff, you know?”

Friends and business partners brought generators — employees stuck around — and they were able to get their milking operation back up and running just five hours after the fire.

All told, on top of the cattle and milk, the fire destroyed at least two tractors, the huts outside the barn, a generator that would have been useful that night and a large amount of hay. Mr. Eastman still considers it a wild experience, but he said they did what they could to prepare for this. He’s seen his neighbors have fires in their barns and watched how they responded, so he kept notes and did the same. That, on top of good insurance, made it so they aren’t fully crippled or even broken.

After the fire, the DEC gave them 72 hours to either compost or bury the dead cows. Mr. Eastman said they chose to compost. Now the scene is flattened rubble and soot. There are ramps that allow tractors to drive up and place hay in the second floor of the barn that remained. A burned antique tractor sitting on top of it, almost overlooking the rubble. Mr. Eastman said he might keep it there as a reminder, even if they rebuild.

Above all, the Eastmans seem to have the response handled, especially considering what could have happened. Mr. Eastman said he remembers getting a closer look at the surrounding barns and seeing the melted siding. The milking parlor was close to going up in flames.