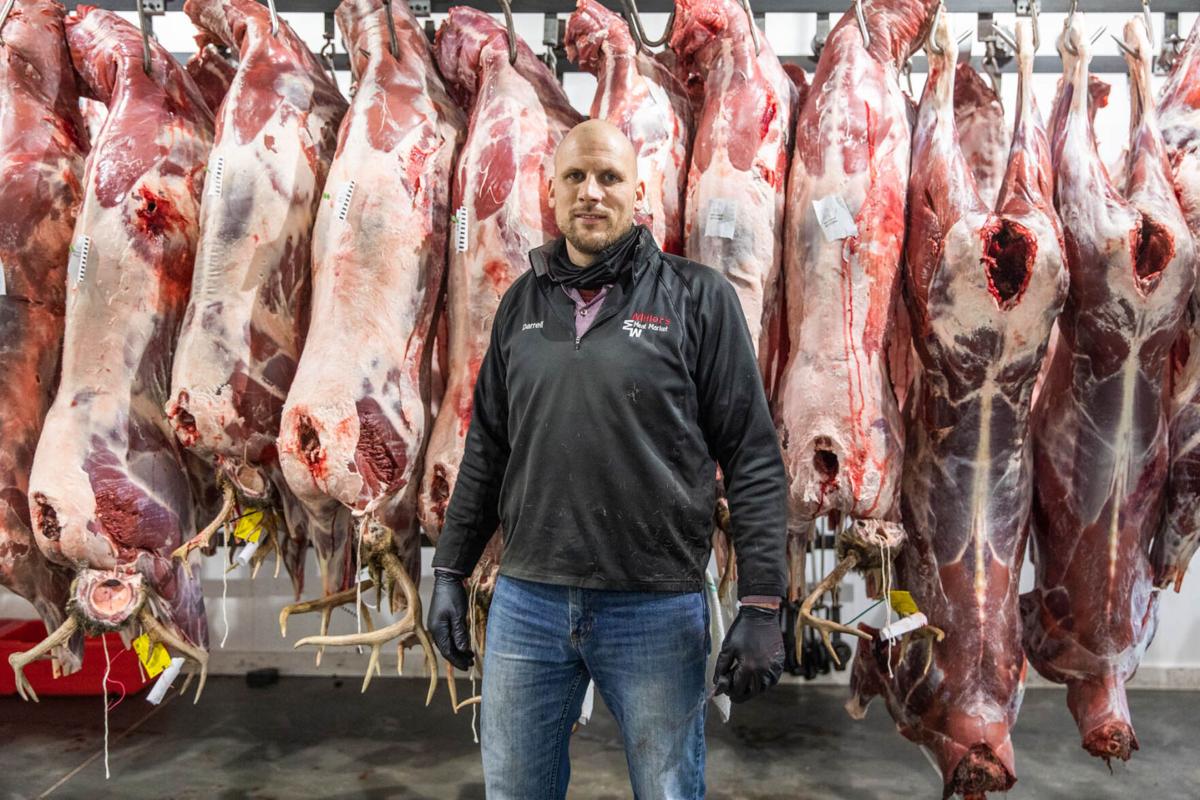 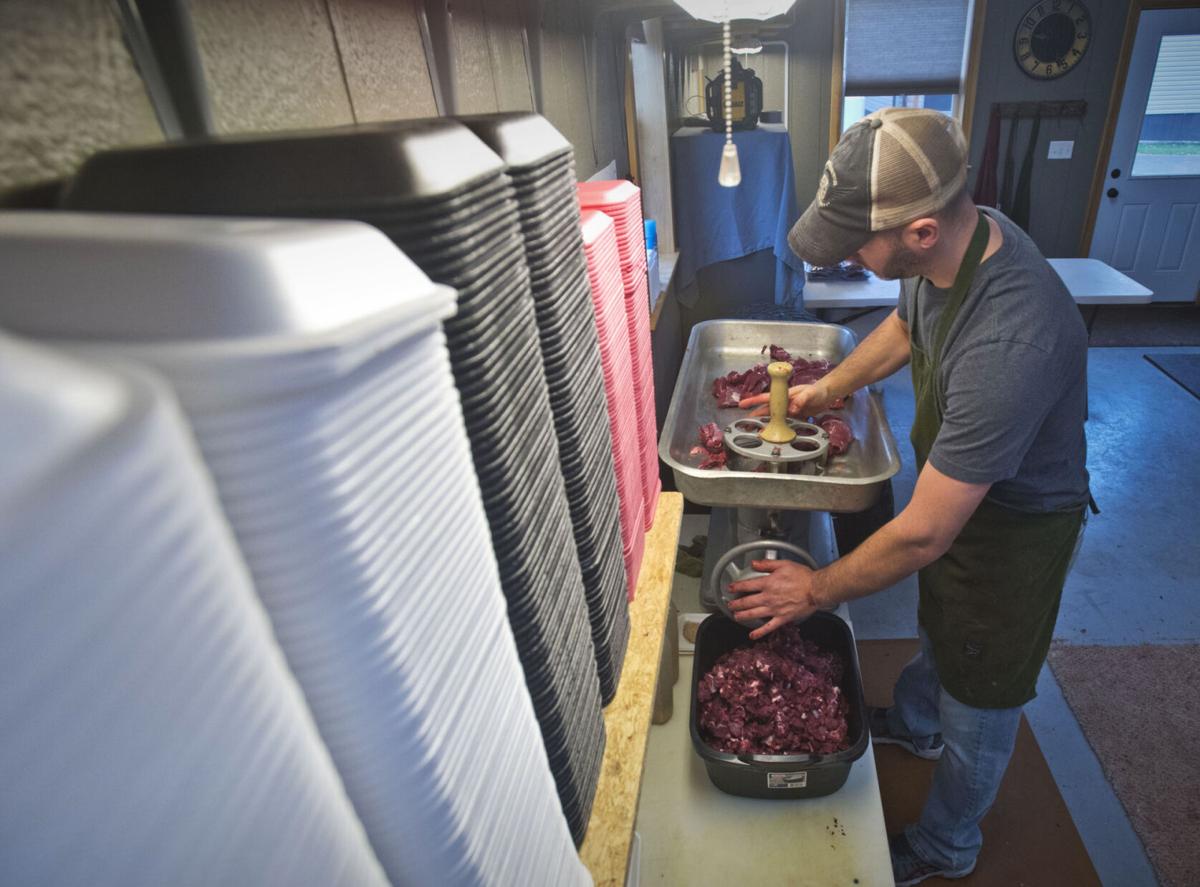 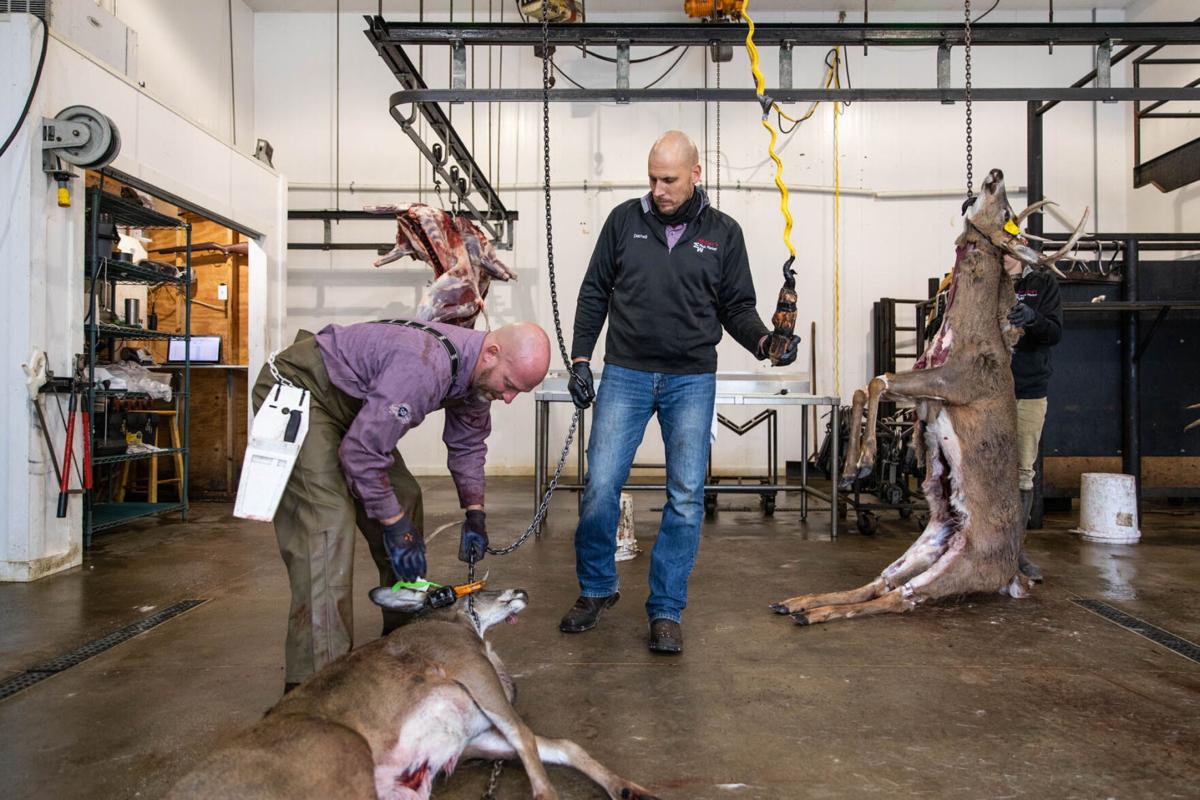 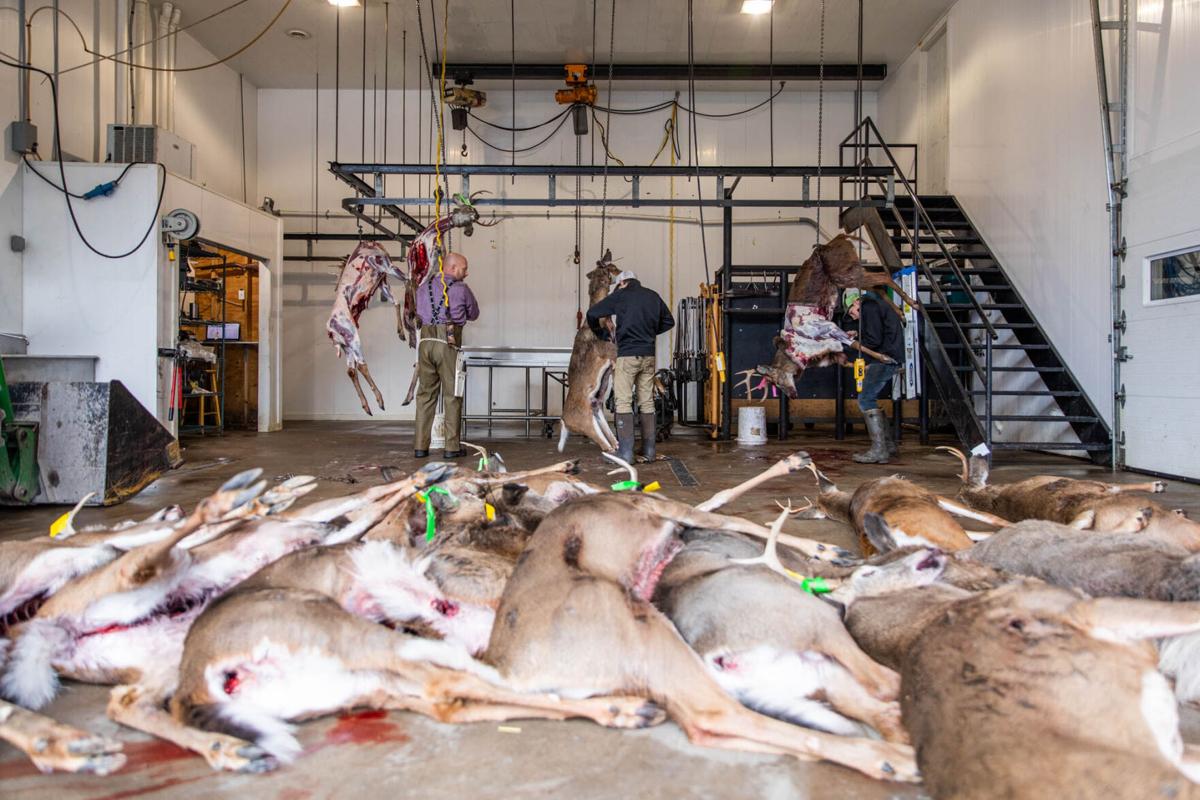 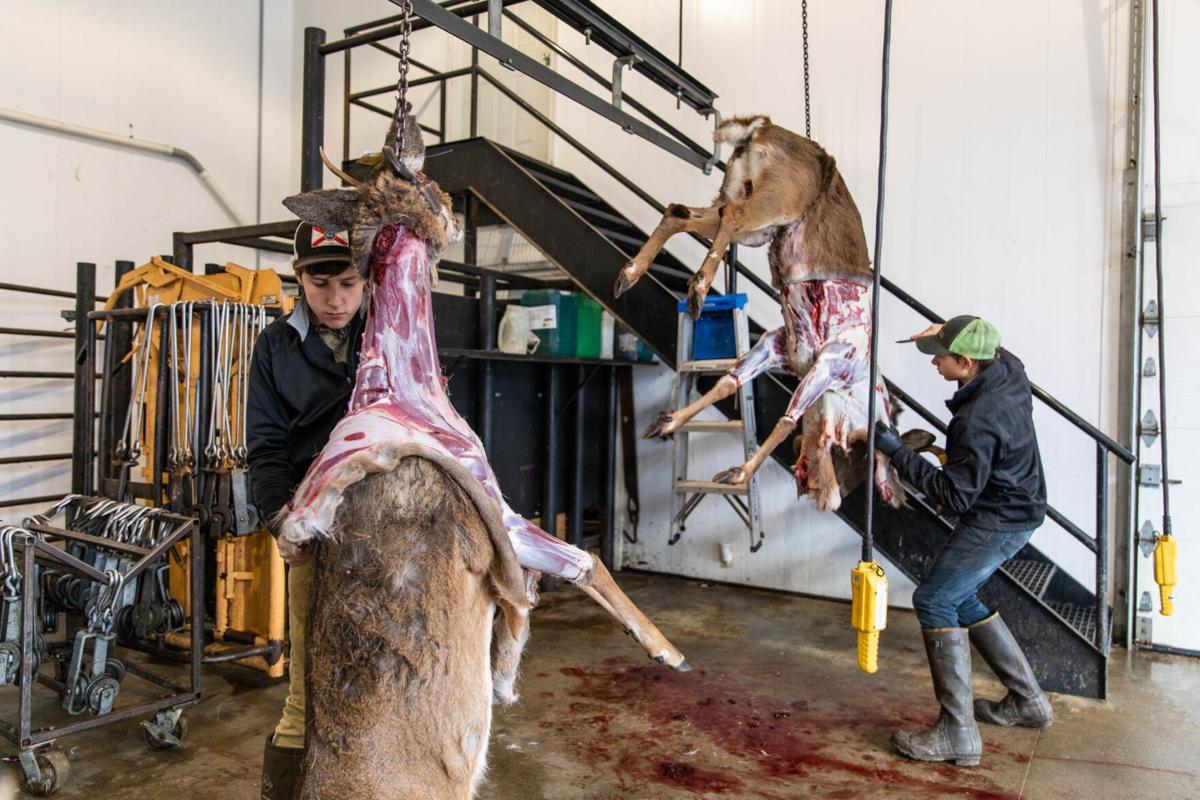 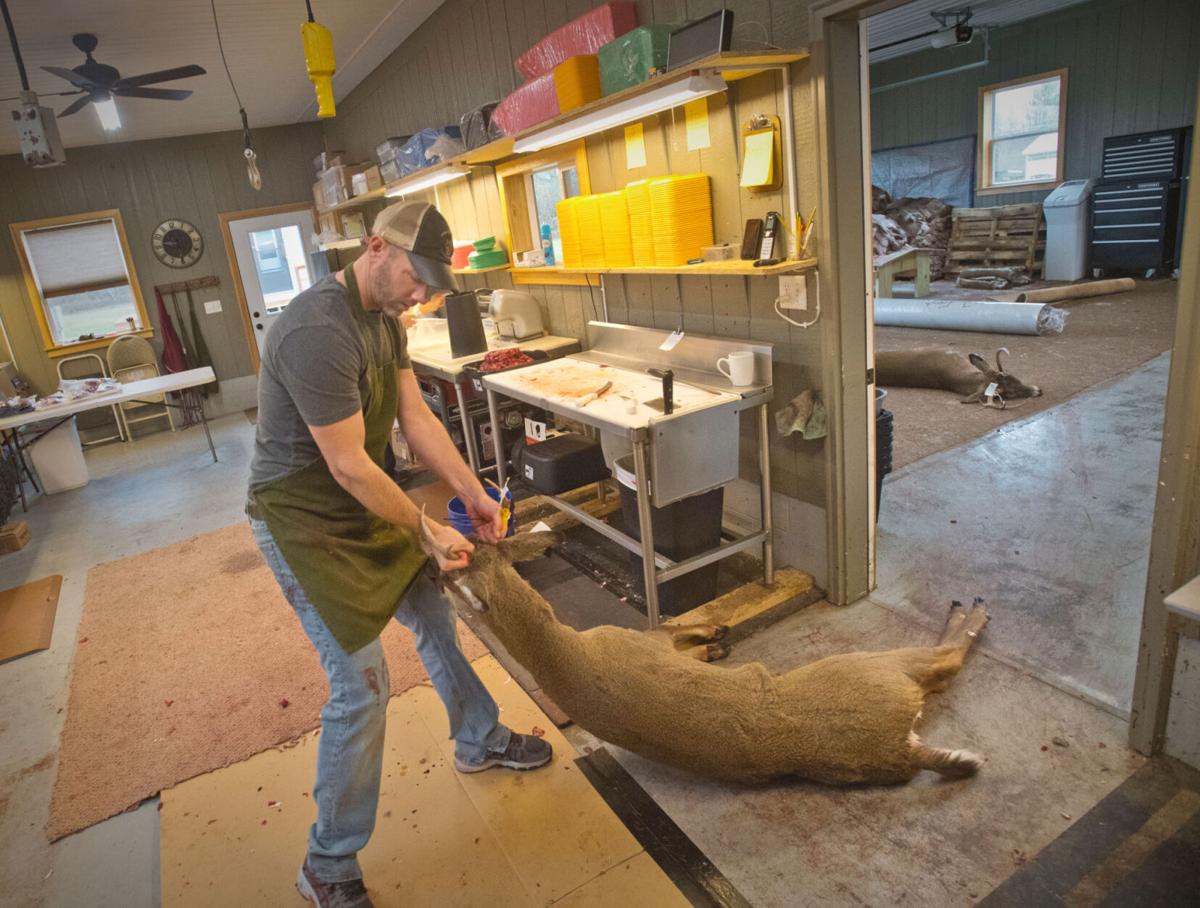 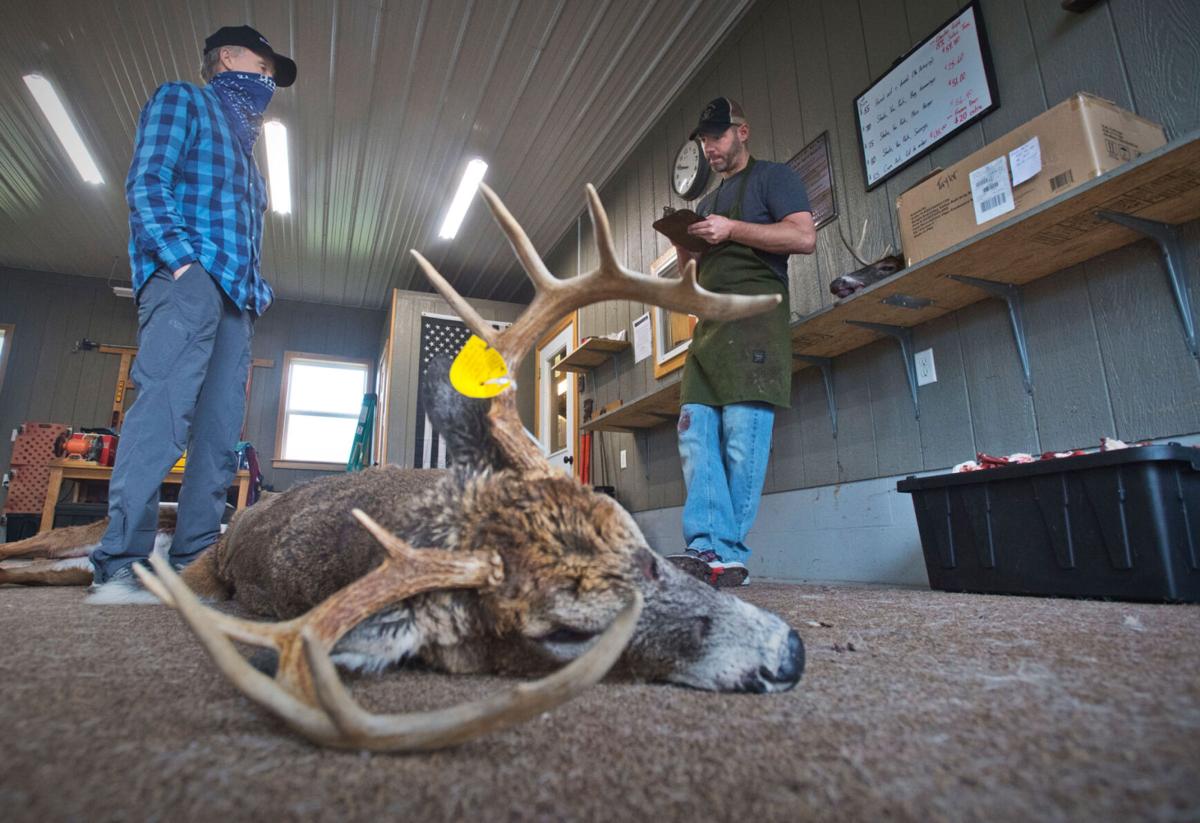 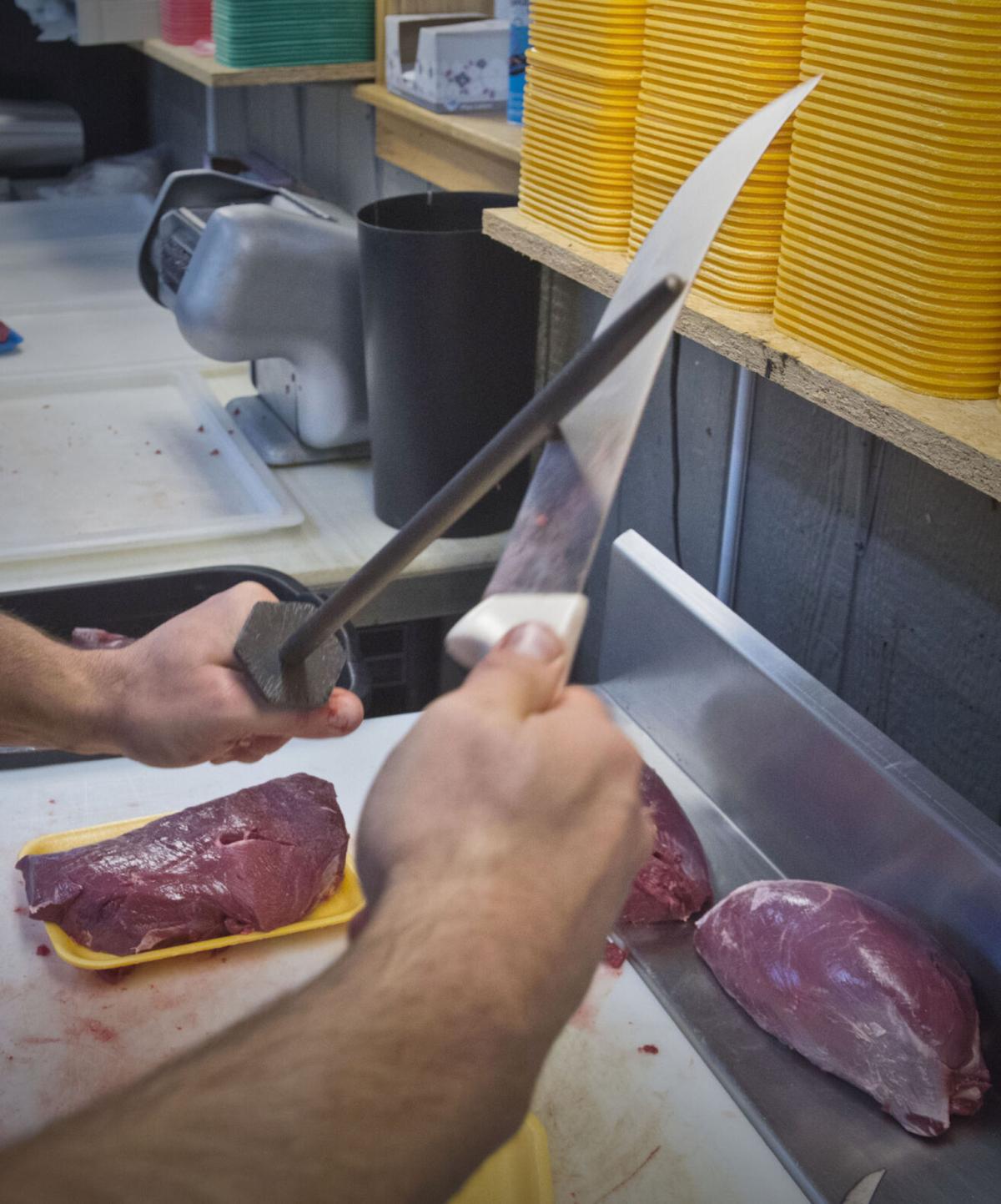 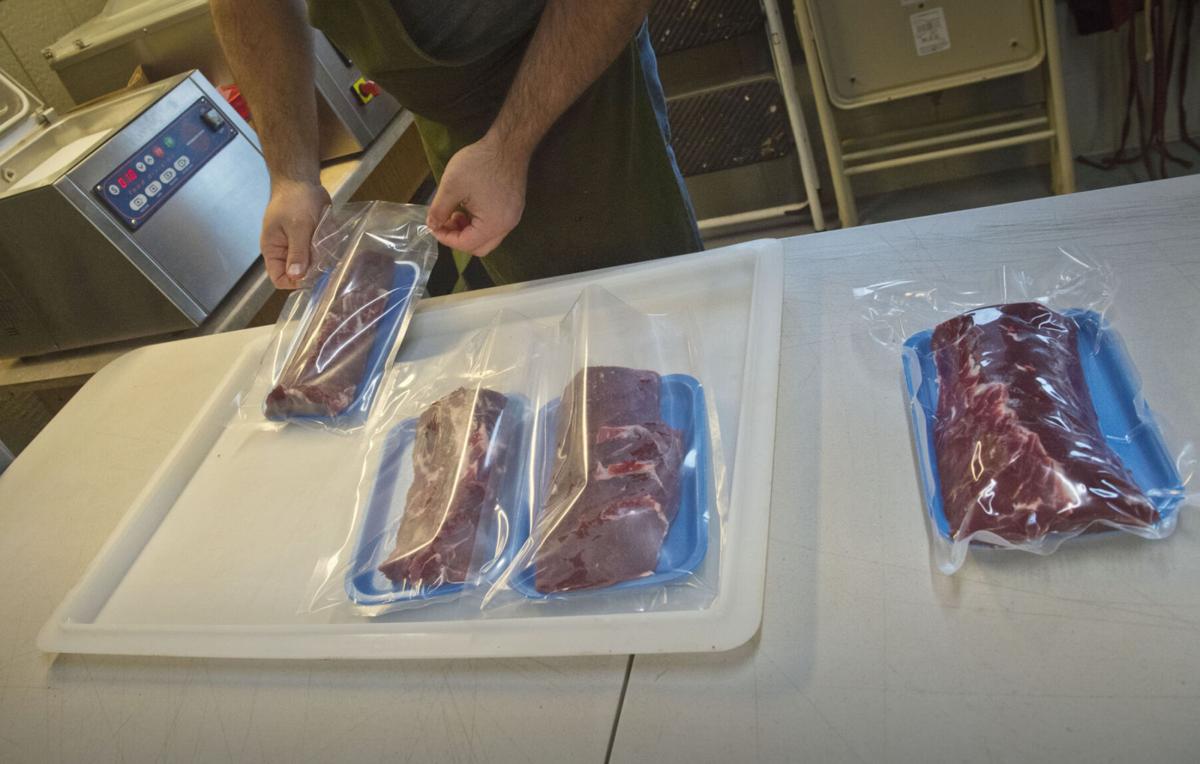 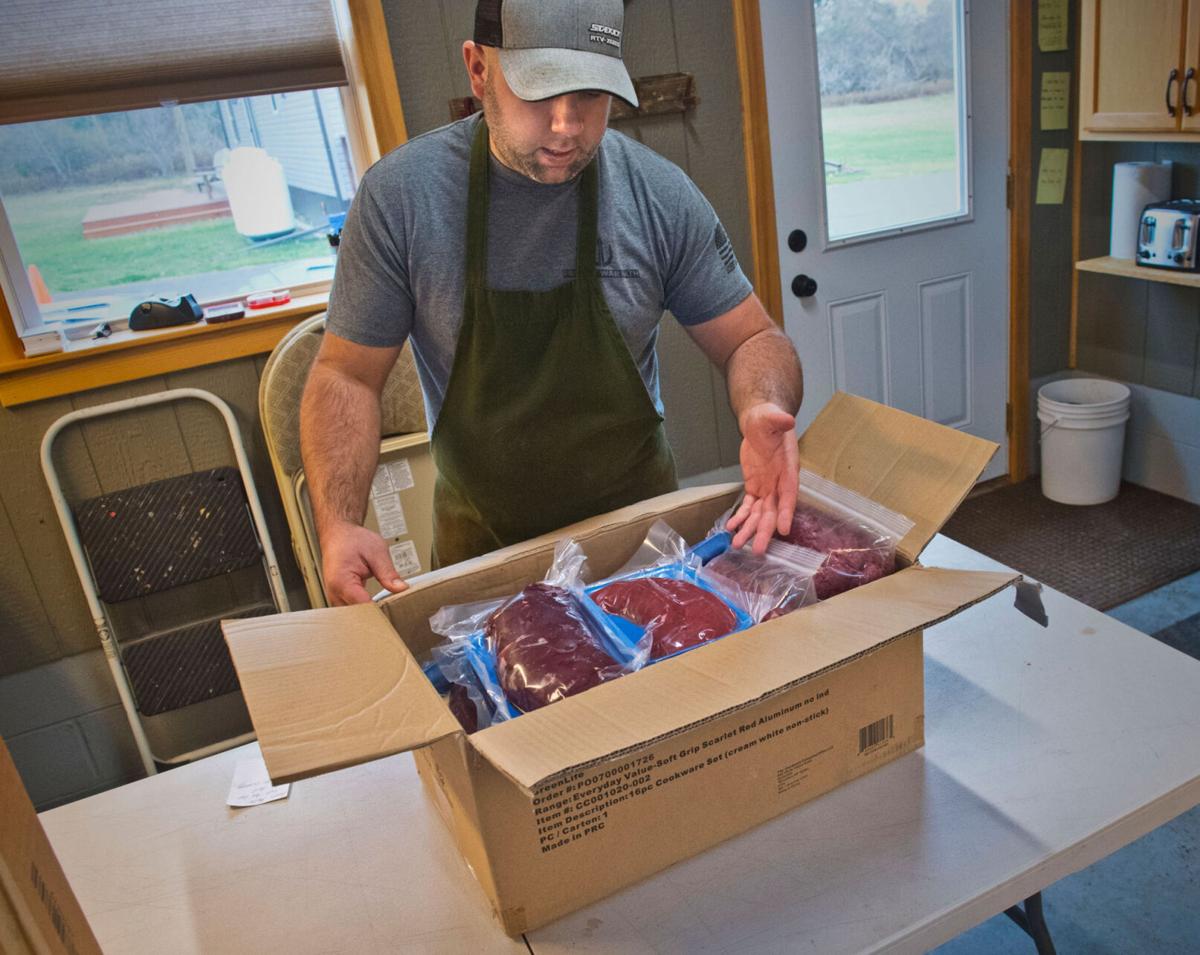 Deer cutter Matt French finishes packing a box with 58 pounds of venison Friday. Hunters will get about one-third the weight of deer in meat after processing. Christopher Lenney/Watertown Daily Times 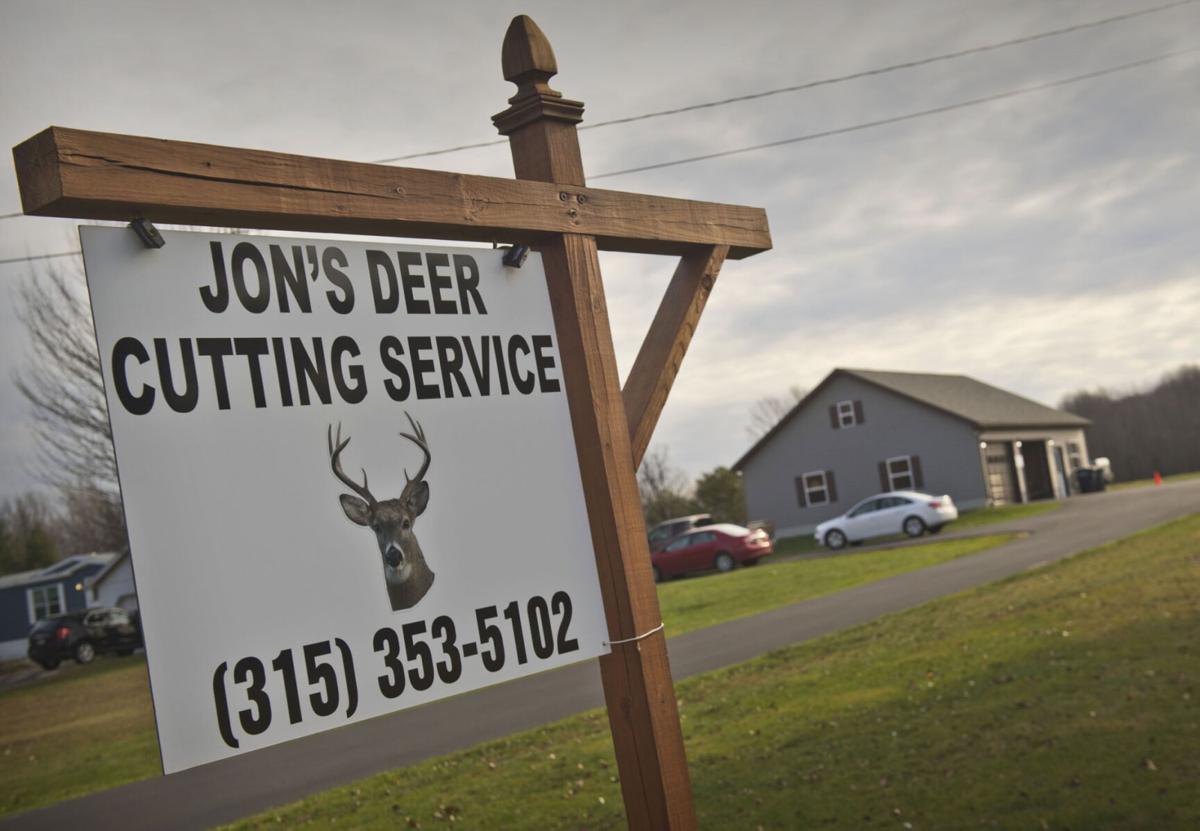 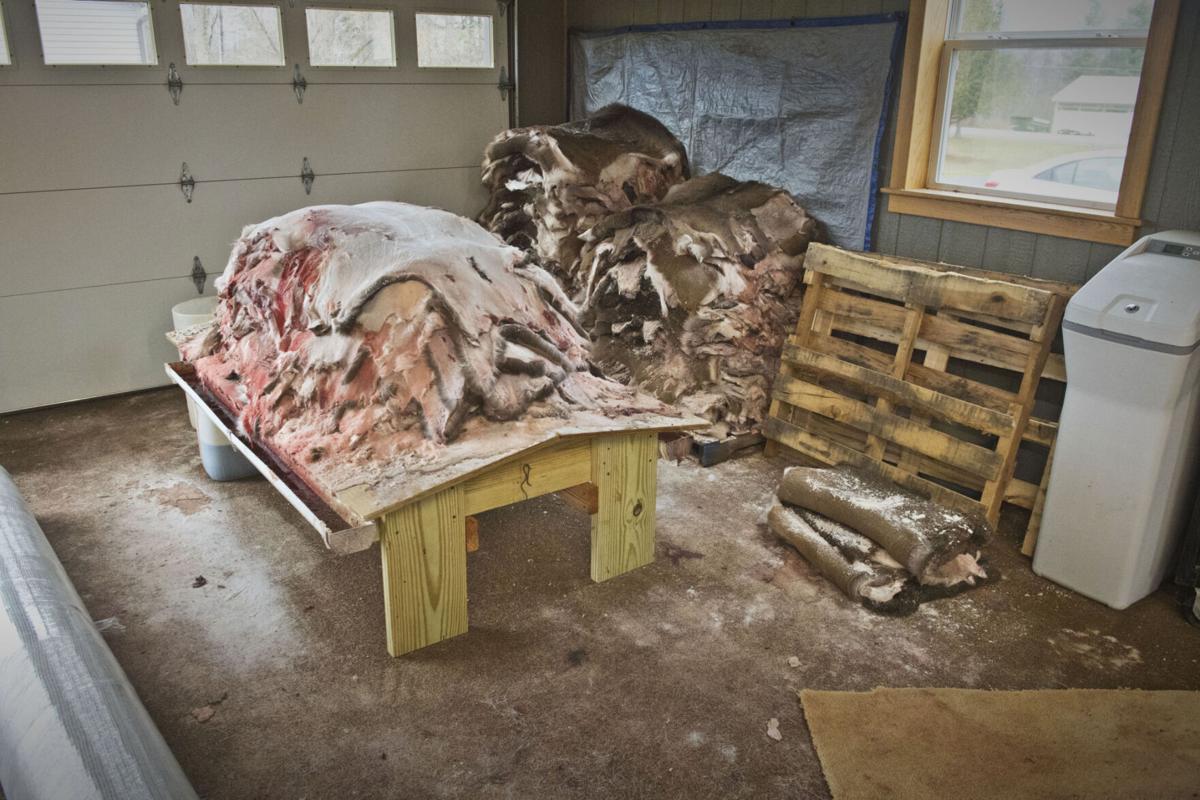 Deer hides not claimed by hunters are salted for storage and will be sold to a retailer buyer. Christopher Lenney/Watertown Daily Times

Deer cutter Matt French finishes packing a box with 58 pounds of venison Friday. Hunters will get about one-third the weight of deer in meat after processing. Christopher Lenney/Watertown Daily Times

Deer hides not claimed by hunters are salted for storage and will be sold to a retailer buyer. Christopher Lenney/Watertown Daily Times

LOWVILLE — Whether it be more free time or weariness of the novel coronavirus, north country meat processors are busier than they normally are at this point in the year, resulting in at least one having to turn deer away for one day only because their coolers were full.

The DEC has yet to report each county’s numbers, but there appears to be a growing trend of new hunters in the state. More than 50,000 became certified in hunter’s safety this year, which is more than double the annual average.

In the north country, for processors like Miller’s Meat Market in Lowville, the quantity and quality of deer coming in are better than past years.

Owner Darrell Miller said they have processed nearly 1,500 deer already, which is an increase of nearly 400 from this point in the season last year.

“We’re at full tilt and trying to do what we can to keep up,” he said.

The surge is due to a number of factors, but the common denominator is COVID-19.

“I think a lot of it is the ‘Country Boy Can Survive’ mentality,” he said. “Also every year we seem to see an increase from growth of business, but this year is probably going to be compounded with everything else that’s going on in the world.”

Mr. Miller said all the deer that come into his business for processing are placed in their cooler, which holds between 400 and 500 deer.

On a recent warm Monday, the cooler was full and they had to turn away a few deer, he said. They got back on track by processing 100 deer the next day, but it doesn’t appear intake will slow down.

The southern tier of the state is opening its season soon, which is usually the busiest time of the year. That means Mr. Miller and his team will have to work even harder to make sure they don’t have to turn deer away again.

“A lot of it comes down to we just really feel like we have a responsibility to our customers,” he said. “It’s not about trying to make more money, it’s just these are our customers that we service every single year, and I like to put my best foot forward.”

In St. Lawrence County, Jon French runs a deer processing business in Norwood as a side business, coming after his father taught him and his sibling, Matt, how to cut a deer when they were kids. Mr. French bought the business from his father, Andy French, about five years ago.

He, too, is teetering on doubling his number of deer processed this year.

He shared the opinion of hunters wanting to put food on the table a little more this year, adding that people might have more time on their hands to be in the woods.

“I thought the warm weather would put a damper on this season, but our numbers are way up,” he said. “Also, we’ve been in business 25 years, and this year ranks one of the top two or three in rack size.”