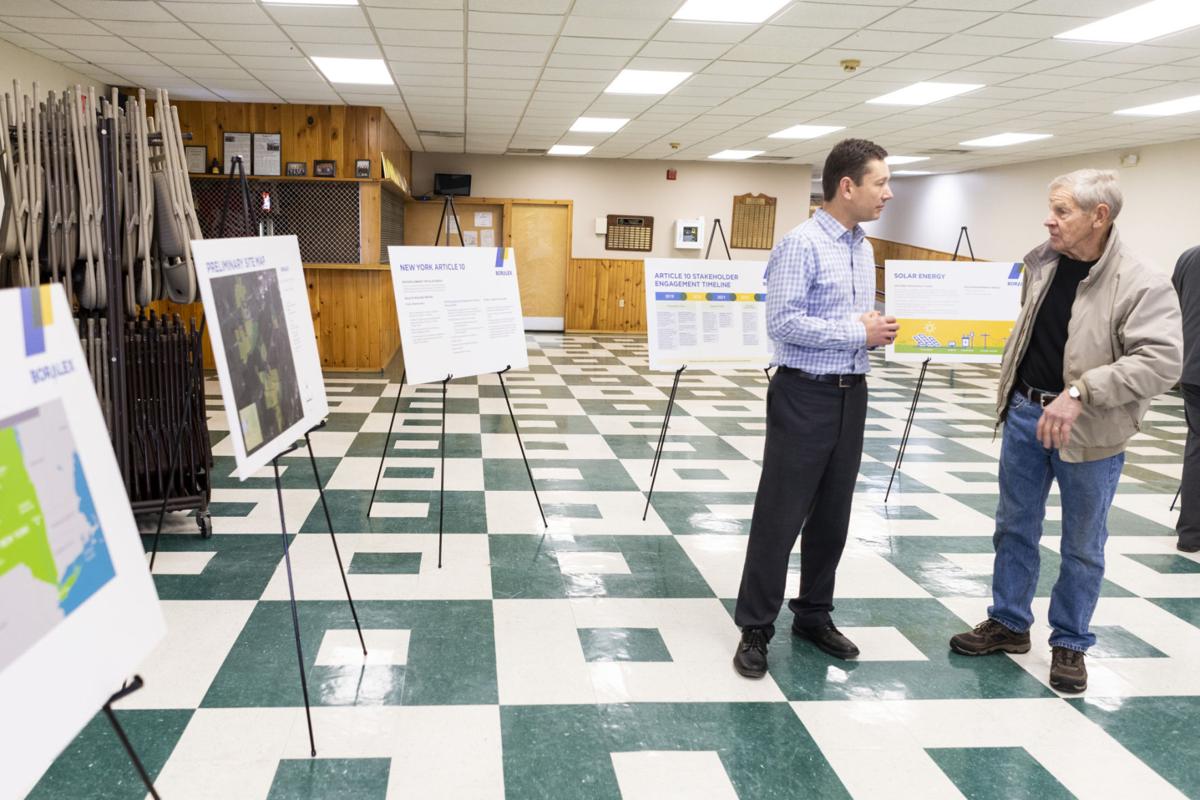 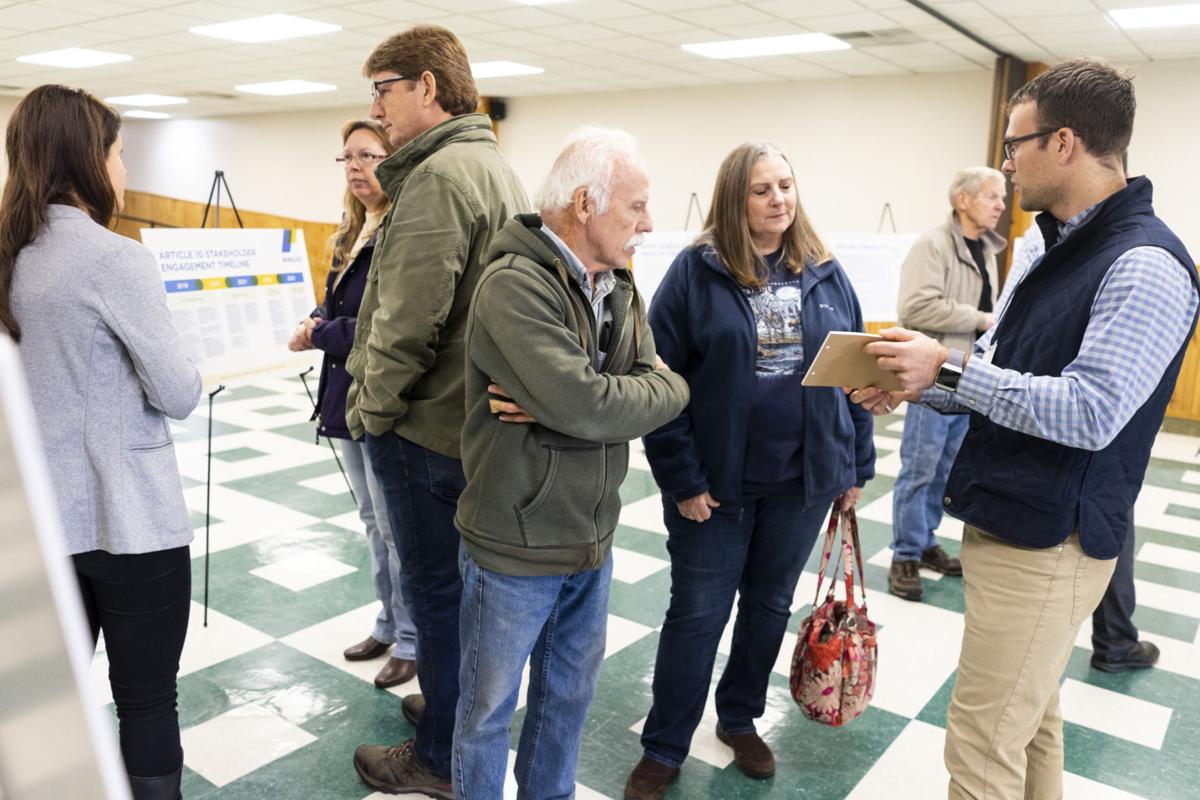 Andrew Buckley, right, development manager at Boralex, explains the rotating panel technology that will be used at the Greens Corners Solar project on Tuesday in Watertown. Julia Hopkins/Watertown Daily Times 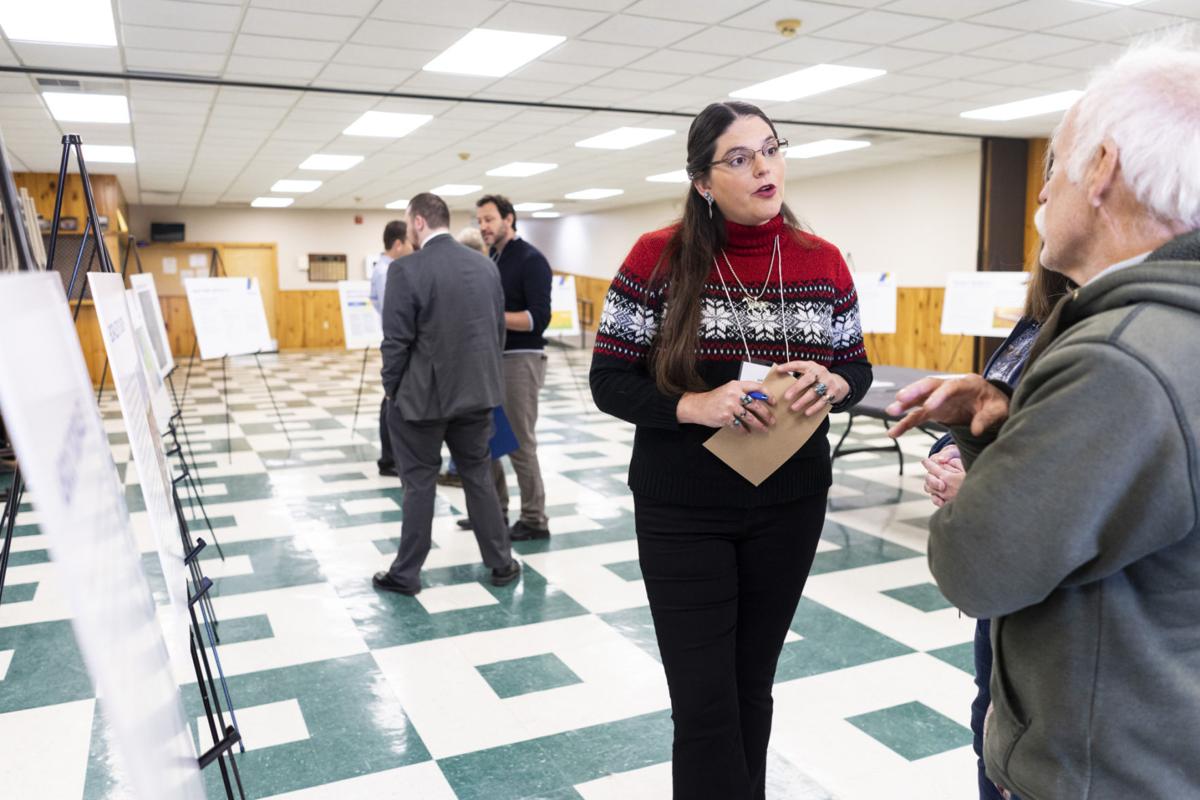 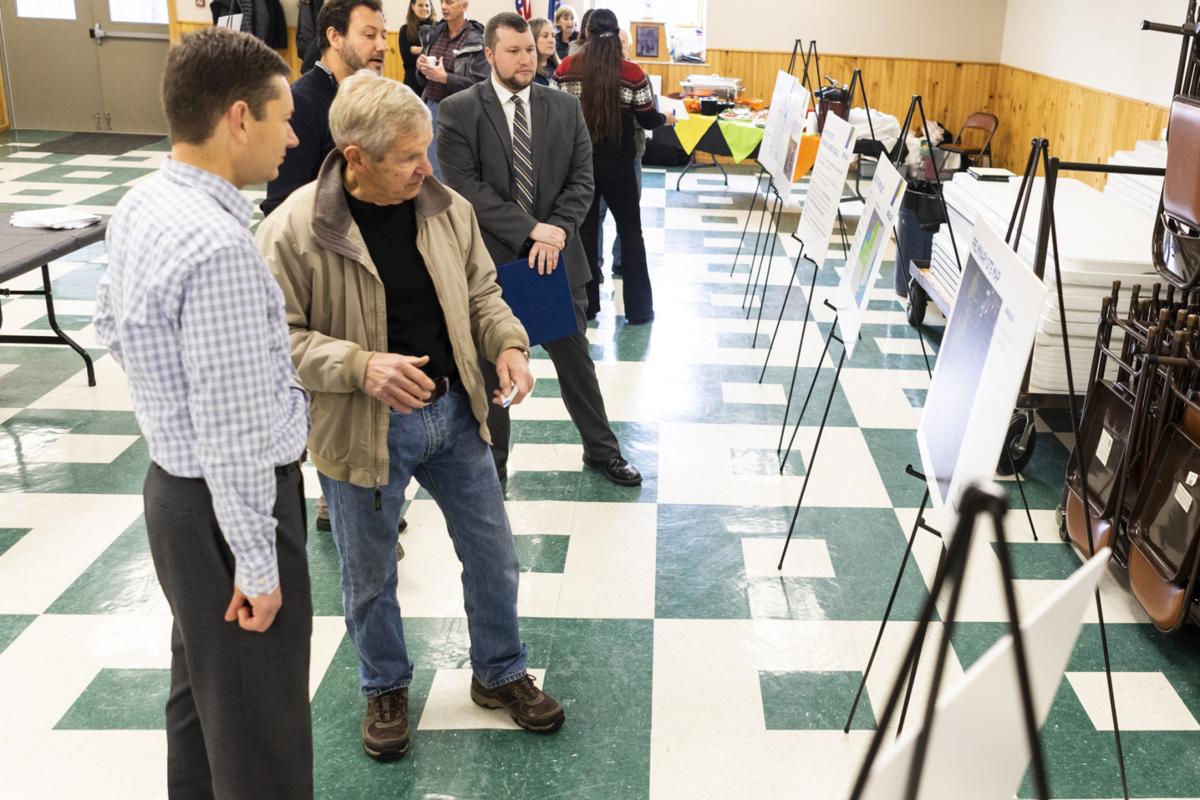 Attendees of the open house held by Boralex at the Town of Watertown Fire Department learn about the Greens Corners Solar project plan on Tuesday in Watertown. Julia Hopkins/Watertown Daily Times 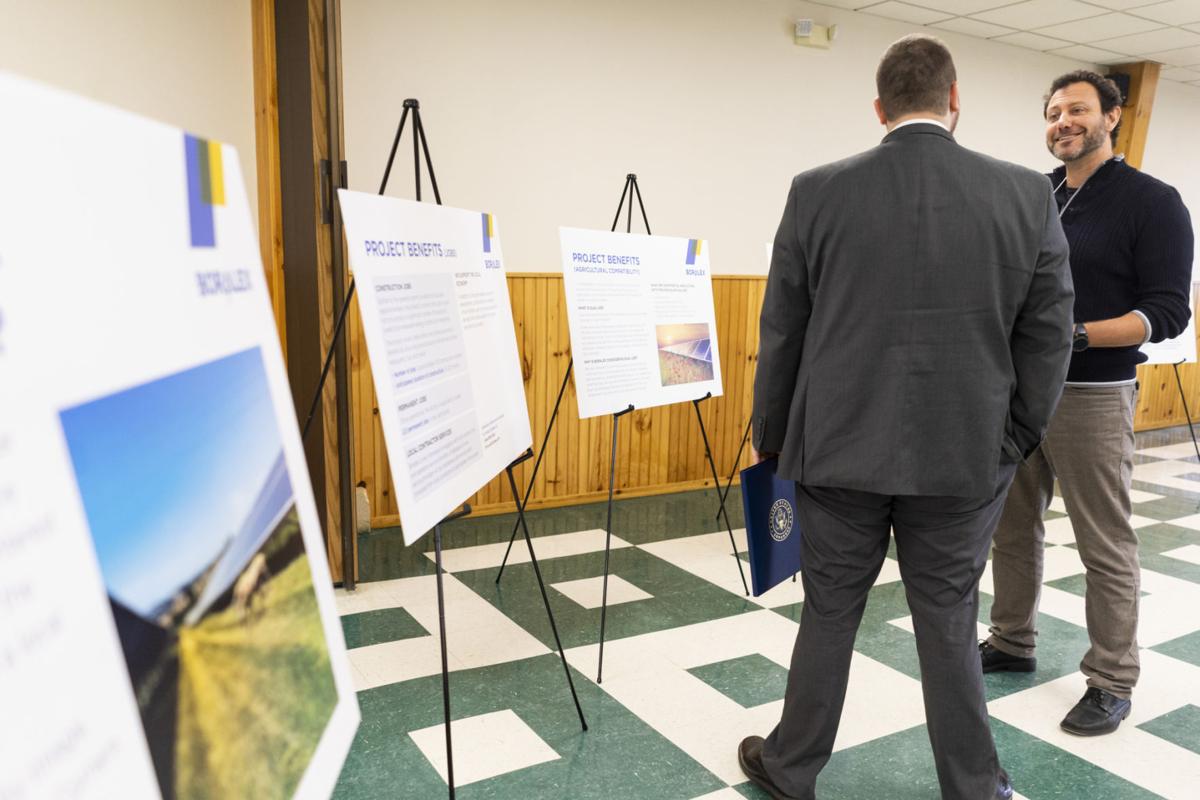 Andrew Buckley, right, development manager at Boralex, explains the rotating panel technology that will be used at the Greens Corners Solar project on Tuesday in Watertown. Julia Hopkins/Watertown Daily Times

Attendees of the open house held by Boralex at the Town of Watertown Fire Department learn about the Greens Corners Solar project plan on Tuesday in Watertown. Julia Hopkins/Watertown Daily Times

They displayed 15 exhibits in the fire hall about the project, which will have about 465,000 tracking panels and other components across about 1,000 acres southeast of the Watertown International Airport and southwest of the city, during their two open house sessions.

About 30 people attended the morning open house, and about 20 visited the station at night. Yvonne Podvin, who chairs the Hounsfield Town Planning Board, and Hounsfield Town Councilman Carson Lennox spoke with developers and perused the exhibits to learn more about Greens Corners Solar. Town residents will ask many questions about it, and Mrs. Podvin and Mr. Lennox said they want to provide accurate answers.

“It’s preliminary, but everything looks good. I think they did a good job on how they’ve processed everything,” Mr. Lennox said.

Boralex aims to start constructing the facility in March 2022 and begin operations in November 2023, but must first obtain a certificate of environmental compatibility and public need through the state Article 10 review.

The company took the initial step toward obtaining a certificate of environmental compatibility and public need through the state Article 10 review process by submitting a Public Involvement Program plan in July, and a revised one on Sept. 13. Companies with projects with a nameplate capacity of 25 megawatts or more must receive certificates from the state Board on Electric Generation Siting and the Environment.

The developer hopes to secure an interconnection agreement with National Grid, which will allow it to connect Greens Corners Solar to the grid. Project Manager Andrew Buckley said the developer plans to connect the facility to a 115-kilovolt line running through the area. Boralex has also applied for the ability to sell renewable energy certificates to the state Energy and Research Development Authority, which provides income, and began discussions with the Jefferson County Industrial Development Agency for a possible payment-in-lieu-of-tax agreement.

Adam Rosso, director of project development for Boralex, said the company has also explored the possibility of selling energy or other services to corporations and other large energy users. The facility should generate enough electricity to power 16,000 average households, Mr. Buckley said.

“We’re also exploring the possibility of connecting into the community as a whole,” said Darren Suarez, manager of public and government affairs for Boralex.

Concerns have arisen in recent years about whether solar projects would cause glint and glare that would inhibit pilots flying out of the airport or Fort Drum. While solar arrays are typically engineered not to cause glint or glare issues, particularly because the panels have an anti-reflective coating, Mr. Suarez said the developer will have a glint and glare analysis conducted to ensure the project poses no issues to the airport or post.

“We continue to look forward to working with the municipalities and community neighbors,” Mr. Rosso said.

Leah Mae Carlisle, Watertown, said she attended the open house to learn more about the project and learn if it may benefit city residents. Renewable energy, she said, will help reduce carbon emissions and create a better world for future generations.

The Quebec developer operates about 2,000 megawatts of wind, solar, hydroelectric and biomass facilities in the U.S., Canada and France.