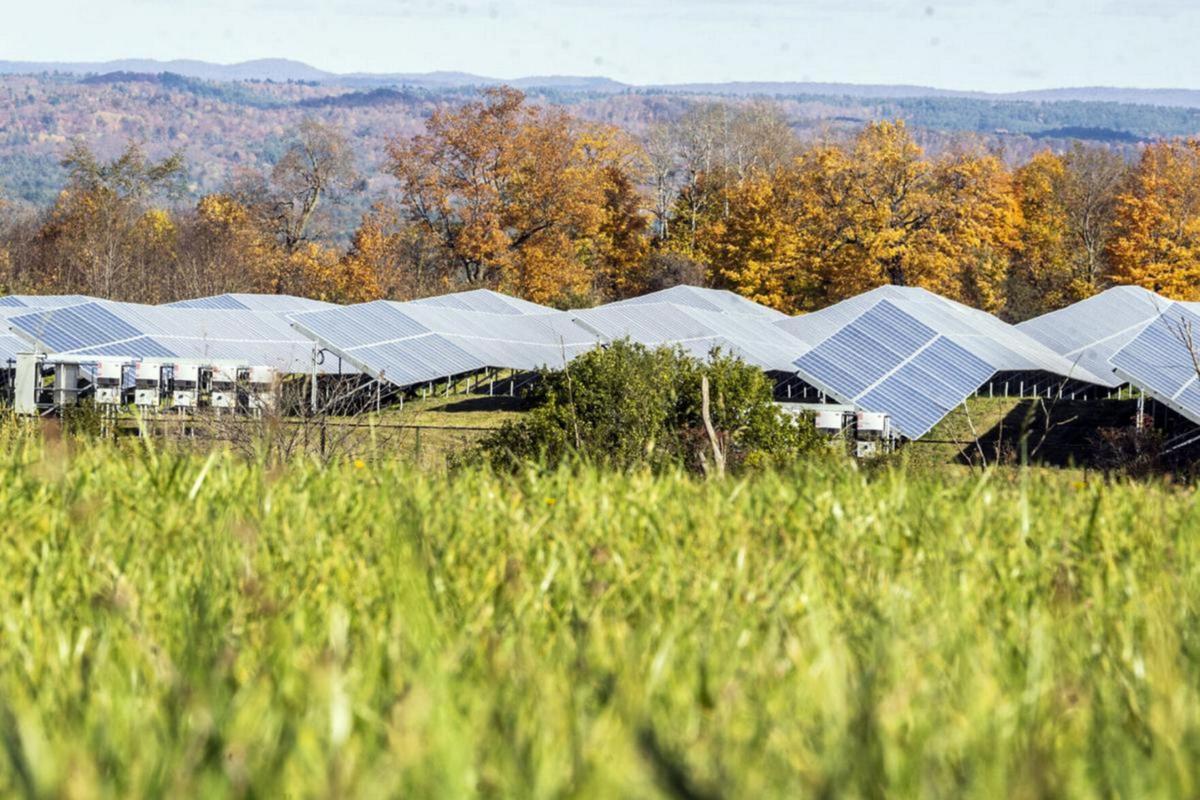 The existing Lewis County solar array on Outer Stowe Street in Lowville provides the county with energy credits with National Grid to cover about 50% of its bill. A new community solar project being considered for the property next to the Solid Waste Transfer Station on Route 26 would provide even more benefits, including a revenue stream. Watertown Daily Times 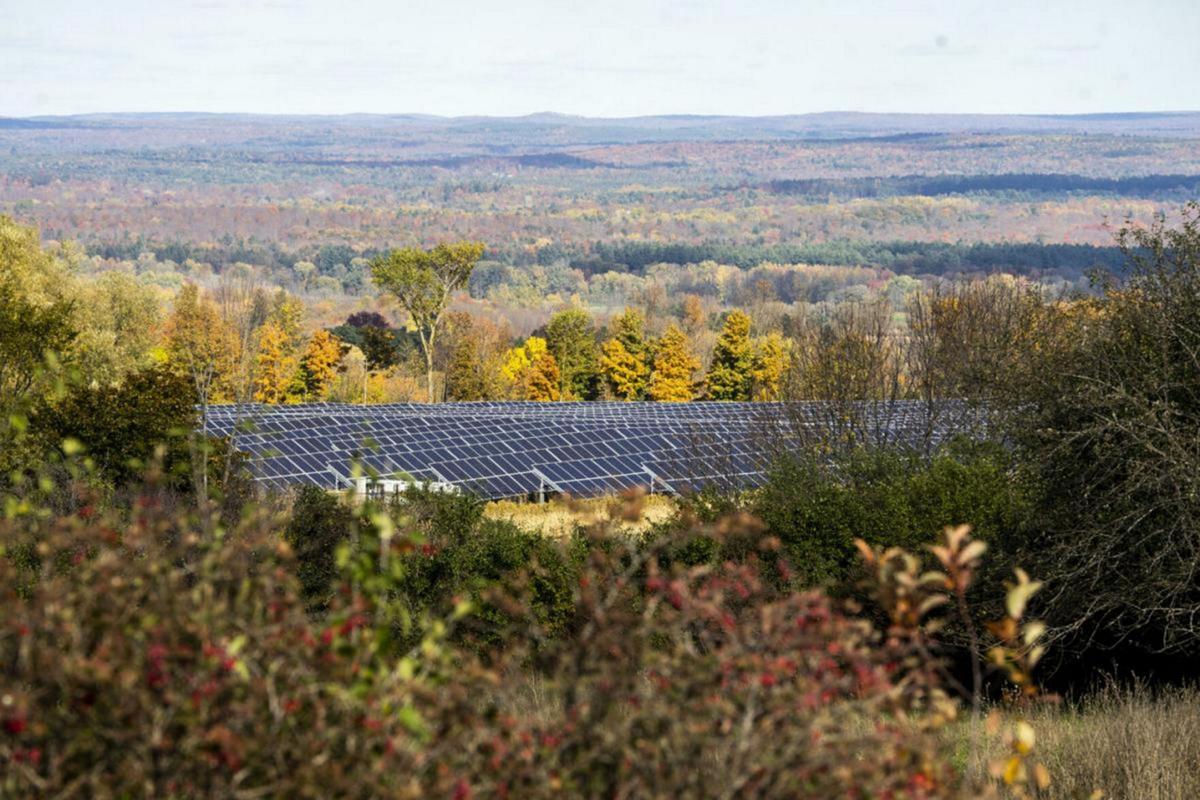 The existing Lewis County solar array on Outer Stowe Street in Lowville, shown, provides the county with energy credits with National Grid to cover about 50% of its bill. A new community solar project being considered for the property next to the Solid Waste Transfer Station on Route 26 would provide even more benefits, including a revenue stream. Watertown Daily Times

The existing Lewis County solar array on Outer Stowe Street in Lowville provides the county with energy credits with National Grid to cover about 50% of its bill. A new community solar project being considered for the property next to the Solid Waste Transfer Station on Route 26 would provide even more benefits, including a revenue stream. Watertown Daily Times

The existing Lewis County solar array on Outer Stowe Street in Lowville, shown, provides the county with energy credits with National Grid to cover about 50% of its bill. A new community solar project being considered for the property next to the Solid Waste Transfer Station on Route 26 would provide even more benefits, including a revenue stream. Watertown Daily Times

LOWVILLE — Lewis County has entered into an agreement with the New York Power Authority to explore the possibility of creating a community solar project on under-utilized county owned land.

The property adjacent to the county Solid Waste Facility at 7952 Route 26 not currently in use will be analyzed for solar suitability by the Authority through the Community Solar and Battery Storage program introduced by Gov. Andrew Cuomo in February.

According to county Planning Director Casandra Buell, the program is designed to work with municipalities on creating ready-made sites for small-scale solar projects in the same way former brownfield, industrial and landfill sites are being prepped around the state for large-scale projects through the 94-C siting process that went into effect this year, replacing Article 10.

“Lewis County doesn’t (own) any of those large properties that aren’t forested and protected,” Mrs. Buell said. “The only opportunity that we had to lease land that we had available was the solid waste facility. There’s land surrounding that facility that’s under-utilized mainly because it’s wetlands and it’s kind of a wonky area.”

“Wonky” for most development could work well for a community solar project.

Mrs. Buell reached out to the Power Authority as soon as she learned of the new program with the solid waste property in mind.

This is not the county’s first foray into solar.

In 2019, the county’s solar array — built and owned by the Connecticut-based Greenskies Renewable Energy — began pumping power into the grid, decreasing the county’s energy bill by about 50%. About 25% of the energy produced goes to the county-owned hospital.

The 2-megawatt array was not expected to produce enough to cover all of the county’s and hospital’s energy needs.

A community solar project, however, will result in a number of benefits to the community that could not be part of the county’s existing solar array which was a simple power purchase agreement with National Grid giving credits toward each power bill, according to Mrs. Buell.

“This (would be a) community solar facility, so the county would have the ability to receive monthly lease payments for the property to be used for solar and on top of that we would have access to up to 60% of the energy produced from that solar farm. That’s amazing. We can have the best of both worlds,” she said. “We can have that energy localized and we would have a revenue stream coming in for the use of the land.”

Although 60% of the power produced would be used to defray the remainder of the county and hospital energy expenses not covered by the existing solar array, local residents will also be able to sign up to tap in to the remaining 40% of the energy making it possible to keep 100% of the energy benefit local, Mrs. Buell said.

“Either way it’s all going to go back to the community: the lease payments, the energy savings,” Mrs. Buell said.

The parcel being considered consists of a total of 21.2 acres not including the waste facility, according to online property records. Exactly how much of the land will be suitable for solar panels once the wetlands and other unusable sections of the property are removed from consideration has not yet been determined, Mrs. Buell said, creating some challenges,

As an example, Mrs. Buell said the wetlands will require permitting through the U.S. Army Corps of Engineers and the state Department of Environmental Conservation.

Local zoning laws for the town of Lowville which houses the parcel, could also pose an obstacle because the relative statute may require an area variance with larger “lot coverage” than the property has, she said.

Perhaps the biggest appeal of the Power Authority program is that the time consuming and technical legwork will be done by that agency.

“Let’s face it, I know just enough about building a solar project to make me dangerous,” Mrs. Buell said. “I couldn’t do all of this on my own.”

With the positive reception by the county board, she and her department won’t have to do so.

“We just signed an ‘authorization to proceed’ so basically we gave NYPA permission to proceed and to really dig deep into all of the details for the site and to come report back to tell us the viability of the site, how they could configure it,” she said. “We’re still in infancy stages but now we’re actually working together to find out if this is something that can actually work.”

The Power Authority, also referred to as NYPA, will reach out to the town, look at the wetlands quandary and “if everything looks monetarily like it would be a good investment for a developer, they’ll put it out as an RFP (a request for proposal) so developers will have an opportunity to bid on that site. They really take care of everything and at no cost to the county. NYPA is essentially a free consultant to the county and the developer is the one that pays the fees to NYPA.”

If the property is found to be suitable, Mrs. Buell doesn’t see a down side to the arrangement.

“There is no other use for this land so with all the benefits, this would be a win-win-win situation for county residents.”

do it and be legends!