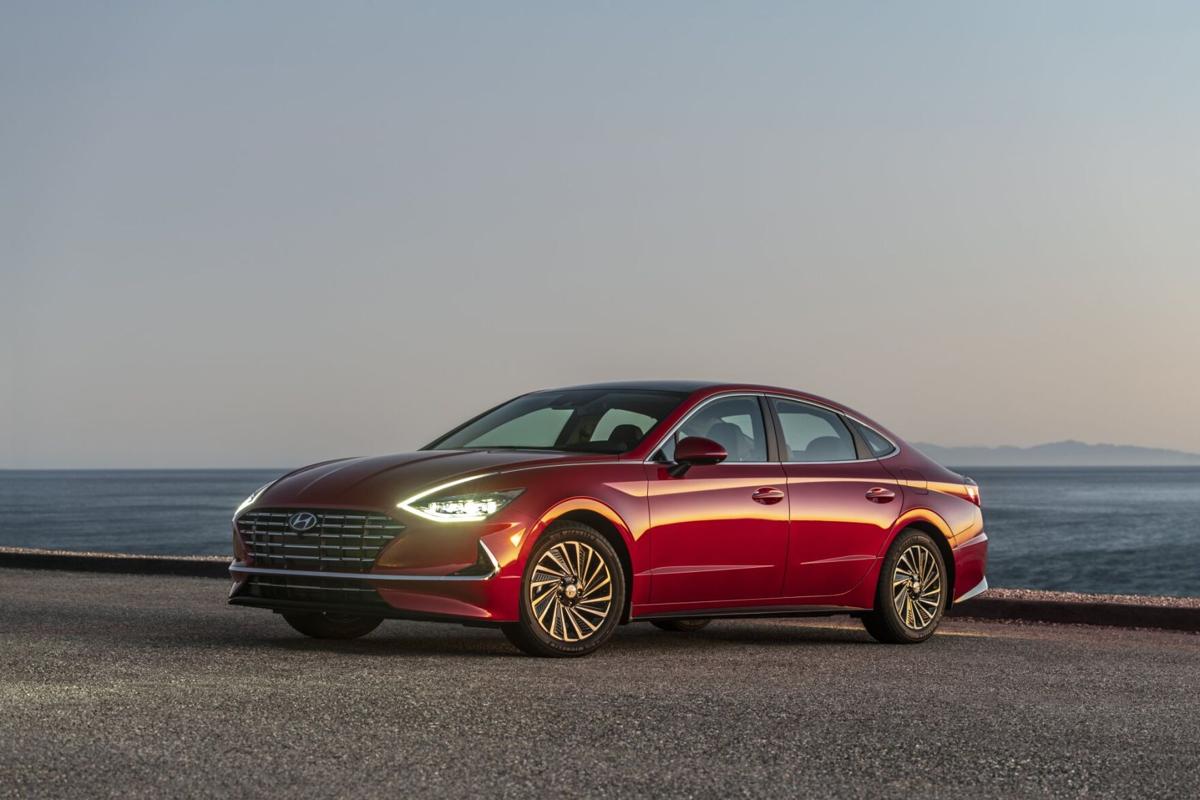 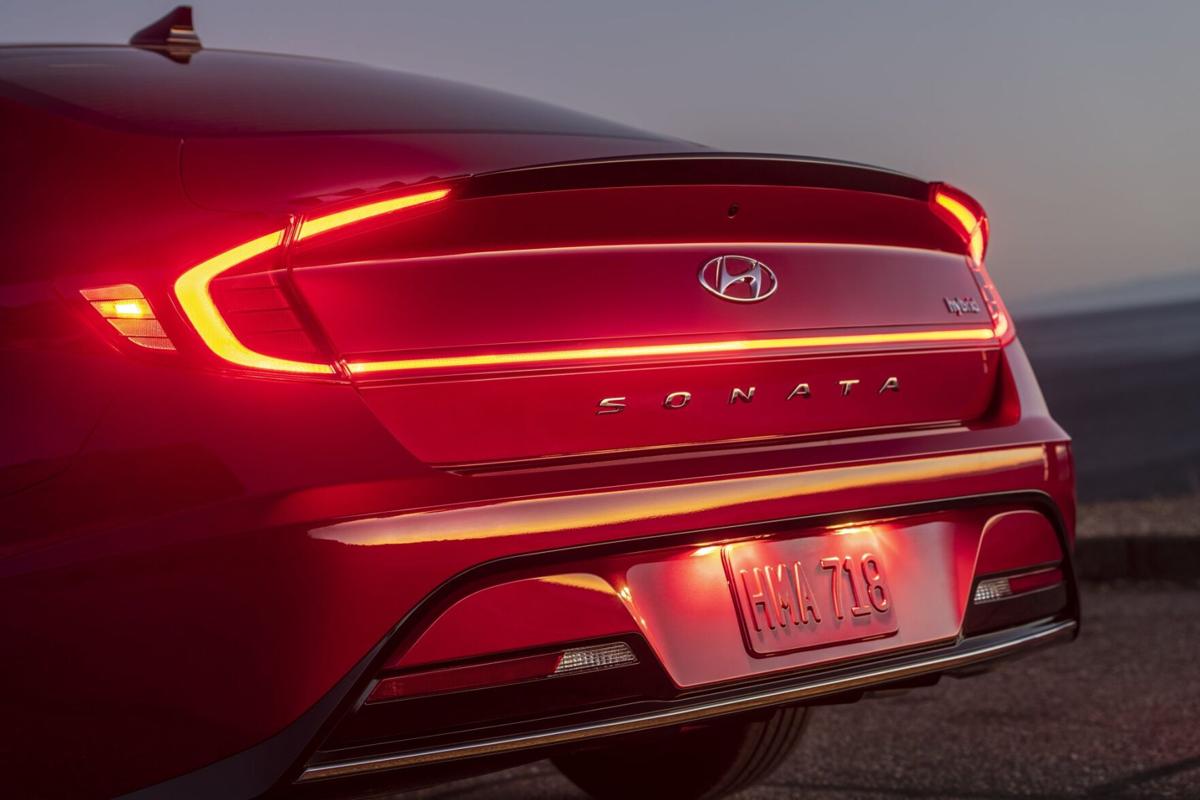 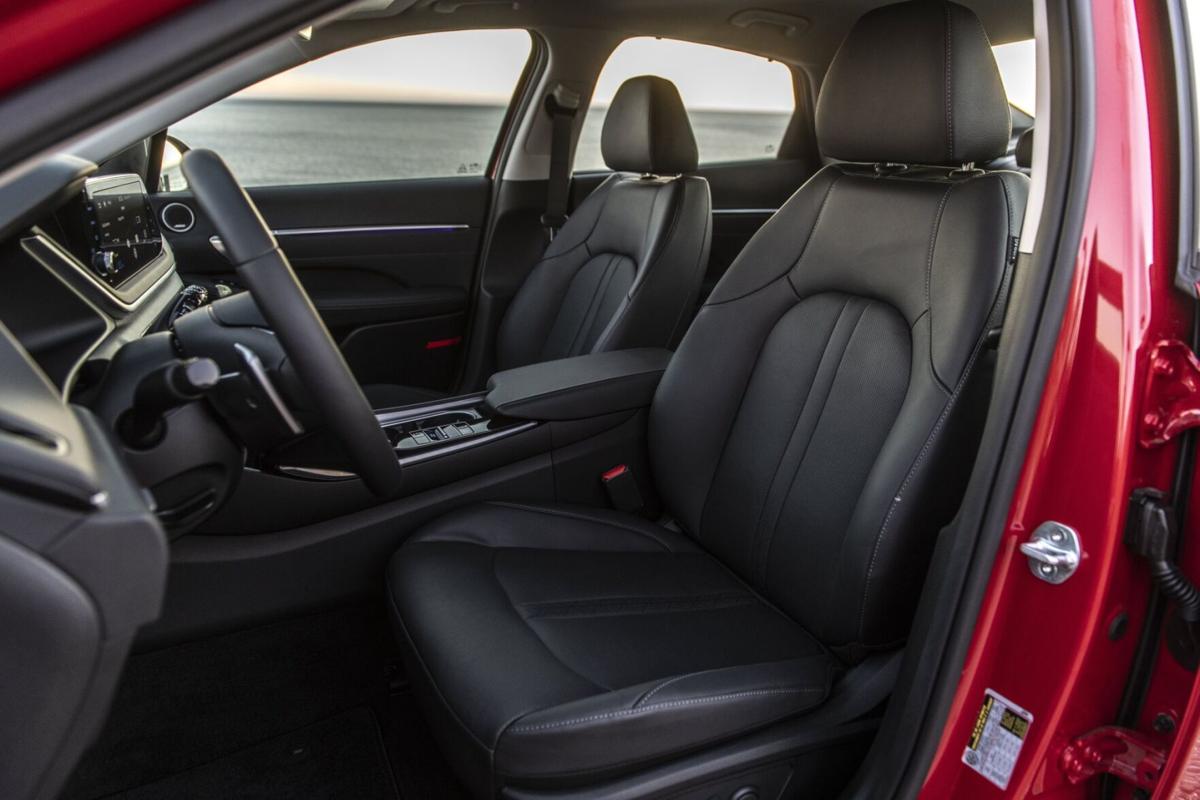 With the Sonata Limited Hybrid, Hyundai is gunning for green credibility while delivering a uniquely contemporary design that stands apart. Drew Phillips/Hyundai/TNS

With the Sonata Limited Hybrid, Hyundai is gunning for green credibility while delivering a uniquely contemporary design that stands apart. Drew Phillips/Hyundai/TNS

Like any car buyer, I can be shallow, drawn to a car as much for its unique design as its utility. So I admit to loving the 2020 Hyundai Sonata Limited Hybrid’s roof. It looks unlike that of any other car, due to its integrated solar panels that directly charge the batteries with 205 watts of electricity, enough to increase mileage two miles per day while also preventing battery discharge when the car is parked.

Arguably, it’s not the most financially efficient way to eke out a couple of extra miles, but its visual extravagance and mere presence is as much marketing message as anything else.

Hyundai is gunning for green credibility while delivering a uniquely contemporary design that stands apart. Mission accomplished. The Sonata Hybrid looks amazing, which is enough for me to want this new sedan regardless of what it does. But in this, I am clearly in the minority.

Most car buyers are so averse to considering a sedan, which is the 2020 Hyundai Sonata Limited Hybrid is brimming with impressive design details. Once more employing the elegant coupe-like silhouette that the 2011 Sonata helped popularize, it wears a fierce new face with a large maw and textured grille bookended by strikingly detailed headlamps with light bands that extend back to frame the hood. Uniquely, the Sonata’s hood flows uninterrupted into the bumper. It isn’t visually interrupted from a front-end fascia, lending this midsize sedan a far more upmarket presence. That’s especially true of the exceptional rear styling, where an integrated rear deck spoiler and chiseled taillamps frame the concave section within it. It’s quite handsome and very distinguishing — a tough accomplishment in a segment known for its conformity.

The stylish esthetic continues inside, where eloquent design and flawless ergonomics show attention to detail. Consider the door armrest; you can grab it anywhere to shut the door, not just in one spot. Or consider the air-conditioning vents, with their fine, graceful look that are positioned above two simple climate control knobs augmented by four toggle switches and five buttons. Similarly, the automatic transmission is actuated by four simple buttons that are easy to actuate by feel. And kudos for the simple toggle switch for the heated/ventilated front seats; it’s a sensibly easy-to-use design.

A 12.3-inch digital instrument cluster greets the driver, and offers a wealth of information, as well as the ultimate in blind spot monitoring. Activate your turn signal and a camera on the side of the vehicle activates in the direction you’re turning, showing what’s in your blind spot. The image is shown on the instrument cluster, where it’s easy to view quickly. And unlike Honda LaneWatch, which does the same thing but only on one side, Hyundai’s system has cameras on both sides of the car. But since it only comes on when you use your turn signal, most people will never be aware of this function.

Complimenting all of this is a sizable a sleek 10.25-inch infotainment touchscreen, with an intuitive user interface that’s blessedly simple to use thanks to the fact that’s it’s not over-designed, a common problem with most systems. As you’d expect, the Sonata is offered with Apple Car Play, Android Auto, three USB ports and wireless charging. The ambience is enhanced by many upscale touches, such as soft leatherette padding, rear window sun shades, matte chrome switchgear and piano black trim intersperse among the hard-plastic trim.

You’ll find legroom is plentiful up front, but headroom and legroom might be tight in the rear for some taller passengers.

But all of this is true of any new Sonata. The big difference with the Sonata Limited Hybrid is its hybrid driveline, which is EPA rated at 45 mpg city, 51 mpg highway, easily achievable, as long as you keep your inner Andretti in check and drive like your grandmother. The good numbers come at a price, as the Sonata Hybrid is not as powerful as its hybrid rivals from Toyota and Honda. But most drivers will find the acceleration is sprightly at speed, thanks to the electric motor’s easy-to-tap torque, even though this car feels underpowered for the most part.

Piloting the Sonata reveals its song to be one of silence and refinement. Steering is over boosted, and the lane centering system intrusively adjusts the steering wheel in infinitesimal adjustments at highway speed. But it will let you take your hands off the wheel and allow it to take over for short periods of time at highway speeds. Given its uninvolving driving experience, you may want it to. Enthusiasts should consider something else.

But most drivers will appreciate the good fuel economy, not to mention the boatload of standard driver assistance safety gear. For them, it makes for a compelling case for the Limited Hybrid being one sweet Sonata.