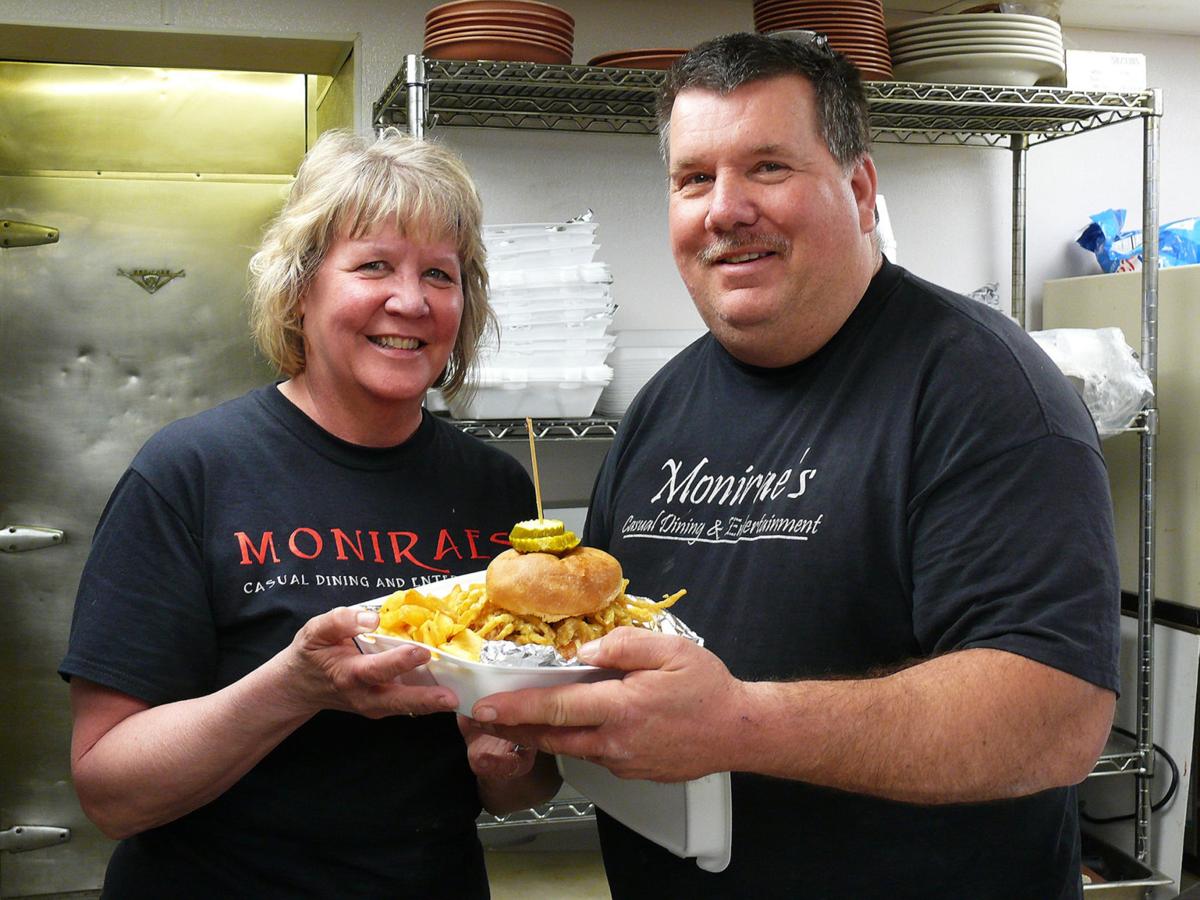 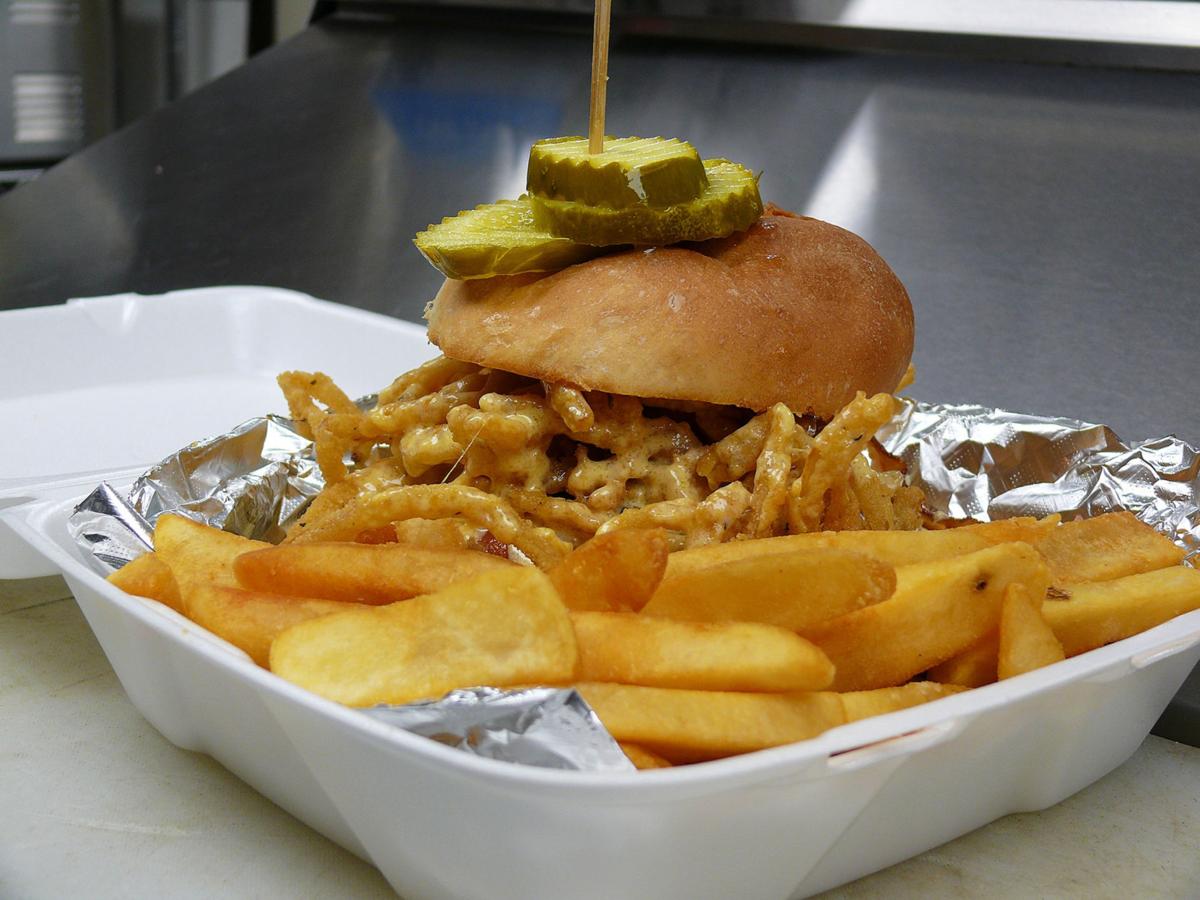 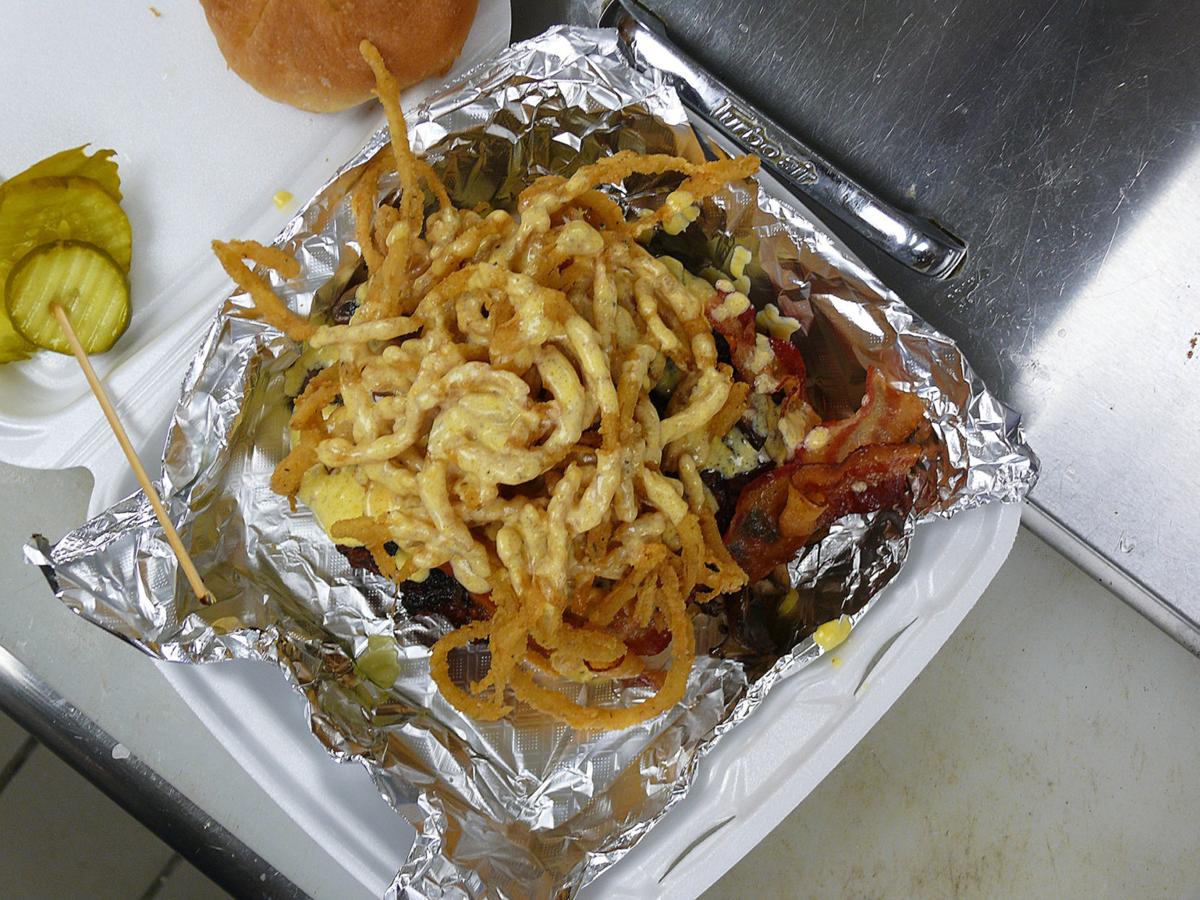 Somewhere beneath a mountain of onion frizzles, bacon, and sauteed mushrooms all covered in cheese sauce is a one-pound burger, half burger and half NY strip steak, The Mighty Declan, winner of the Best Burger in NY State award. Randy Pellis/Oswego County News

Somewhere beneath a mountain of onion frizzles, bacon, and sauteed mushrooms all covered in cheese sauce is a one-pound burger, half burger and half NY strip steak, The Mighty Declan, winner of the Best Burger in NY State award. Randy Pellis/Oswego County News

PENNELLVILLE — What’s very big, very good, made in Pennellville, and is the best in the state? That’s right, it’s Monirae’s Mighty Declan Burger.

A Big Mac is half-a-pound of burger. The Mighty Declan laughs at any comparison to the puny Big Mac. The Mighty Declan is one pound of beef, half burger, half NY strip steak, ground together, doused with A-1, char-broiled, and smothered with three strips of bacon, sauteed mushrooms and a mountain of homemade onion frizzles, all topped with cheese sauce and a good bun skewered with slices of truly great pickles. There’s also a side of very nice steak fries that sits alongside the burger in case you’re still hungry.

“The burger’s named after our grandson. We have three grandkids, and we have something named after each one of them,” said Paul. “The Mighty Declan. He’s a mighty little six-year-old kid too.”

Somehow, the incredible improbability of all this came about beginning with a seemingly anonymous nomination. Next thing the Meyers knew, they were in the top 10.

“Each one of the 10 got videoed and streamed live online,” said Paul. “We literally had to build it (the burger) for them on video.”

With that, they jumped into the top four and from there were voted number one in online voting.

“They notified us May 1,” Paul said. “When this all clears up, they’re going to give us a plaque and do another big thing for it.”

There’s obviously a lot about the family in Monirae’s. Even the name is the combination of their two daughters’ names, Monica and Chelsea Rae, and family photos are printed right on the menu.

With the advent of COVID-19 and its business restrictions, all restaurants in the state are only takeout for now. That doesn’t seem to have hurt Monirae’s.

“Our to-go business has been doing really well,” Paul said.

And of course, The Mighty Declan just might have something to do with that. Prior to being named the best burger in NY state, Monirae’s sold its share of Mighty Declans. But since the award?

Obviously, awards can make a difference.

“It was pretty exciting getting that phone call,” Kathy said. “I never expected it.”

But now, after reading this, you can expect the best burger in the state may very well also be the biggest you’ve ever tackled.